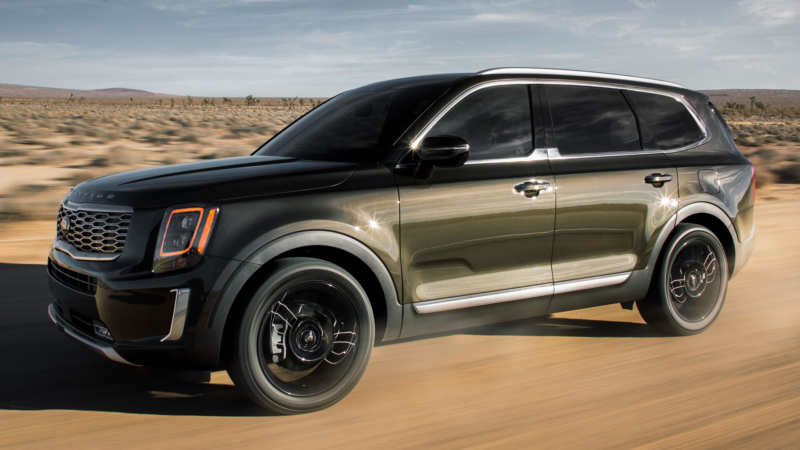 KIA Telluride is a front- or all-wheel-drive SUV of the full-size niche. It is not just “the undisputed flagship” of the Korean company’s crossover arsenal. It is also the largest model in the history of the automaker from South Korea. The novelty was officially unveiled in January 2019 during the North American International Auto Show. However, the concept version was shown at the Detroit show in early 2016 and later in September 2018 during fashion week, held in New York. The novelty boasts brutal looks, quality, and roomy interior, as well as high-performance technology. The entire KIA lineup.

As soon as the official show of the off-road version of the Kia Telluride took place, it was a little believed that the new car would get the same design. Instead of the usual sharp and elongated detail design, they decided to turn to a rough and chopped design. The Korean company’s design team decided to move away from the usual direction to say it. The SUV nose has a huge radiator grille, which received two chrome lines at the top and bottom. Also, there is a mesh inset and KIA emblem.

The front bumper looks very modern. Its central part is reserved for two additional radiator grilles, where there are a pair of fog lights and sensors. Its side part is equipped with two air intakes that have chromed overlays. Separately, it is worth mentioning the small front optics. There is a feeling that the specialists did not have time to finalize it, which seems to undermine the overall appearance of the new Kia Telluride slightly. Engineers decided to use LED technology to fill the front optics. 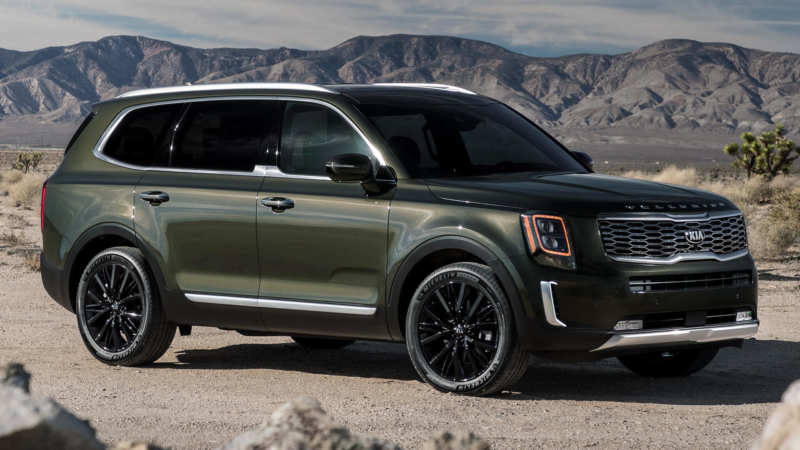 The central part is highlighted using two lenses and LED running lights are added along the contour. Again, there is a feeling that such a massive Kia Telluride 2020 SUV should have larger optics, but it looks quite small here. It is possible to emphasize the front part of the Korean SUV thanks to a massive hood, the central part of which has been raised above the main one. There are also two cutouts.

The side part is solid and fully consistent with the entire exterior of the Jeep Kia Telluride. The presence of a massive body, strict lines, and the minimal amount of chrome elements attracts the eye. Because of the large windows, it becomes clear that there is a third row. A presence of plastic protection on the bottom, huge “rollers,” and good height of ground clearance speak about the machine’s impossibility in terms of lack of roads. However, it is not without modern elements, such as side mirrors. 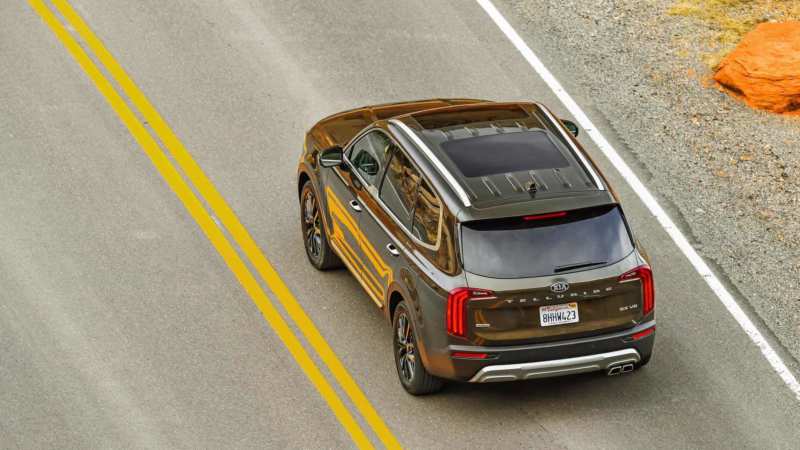 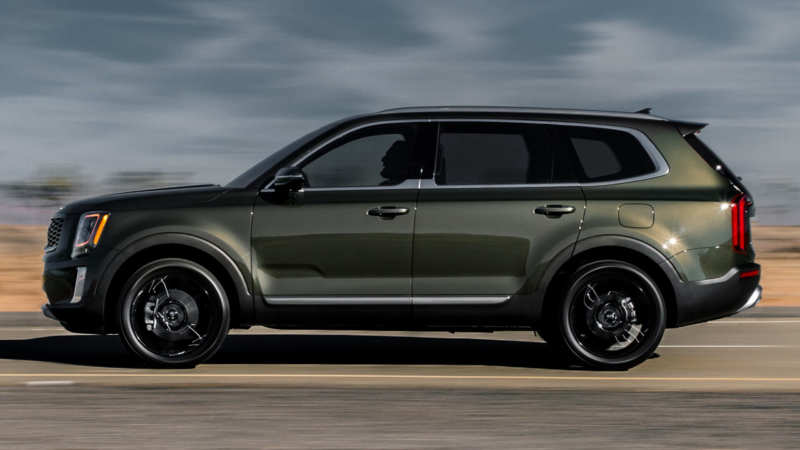 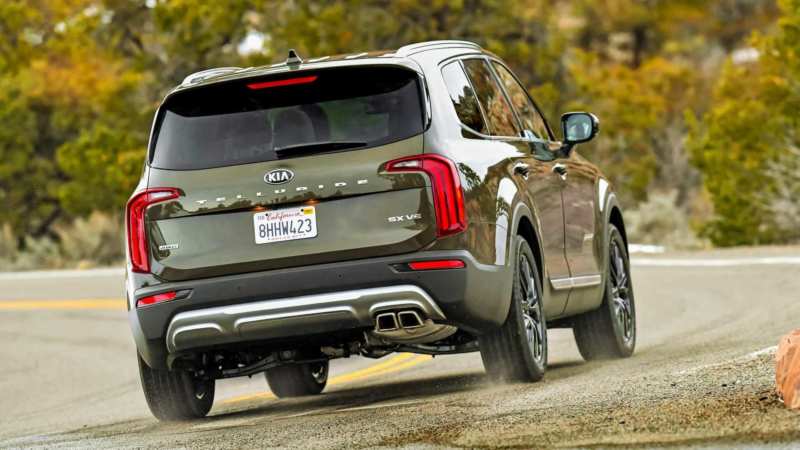 The specialists decided to install them on the door panel rather than in the front windows’ corner. The basic set of mirrors can include an LED turn signal indicator, automatic folding, and electric drive adjustment and heating. For a fee, they can be equipped with memory for two adjustment modes. Looking at photos of the KIA Telluride, it’s hard not to notice the wheels. Basic versions rely on 18-inch light-alloy wheels. However, as a separate option, it is possible to install 19-inch “rollers.” The clearance height is 203 millimeters.

The production Korean KIA Telluride SUV was named after a small town in Colorado.

Rather unusual looks the rear of the “Korean.” Almost immediately, you can notice the massive luggage compartment door and L-shaped brake lights. The design team has not demonstrated such a thing before. As for the stops themselves, they are set vertically, and thanks to the LED base and dedicated sectors, the stern of the SUV received a more unusual appearance. A little bit in this respect, the crossover reminds Rolls-Royce. If we talk about the trunk lid itself, it has been decorated thanks to several curves, a massive model inscription, and a compact spoiler of the sporty type, which was placed at the very top.

According to the company’s representatives, the basic version of Kia Telluride will already boast an electric boot lid drive, a rear camera, and a system of lowering the height of ground clearance. The back part of the automobile is emphasized with not absolutely the standard bumper. Some of its parts are painted in body color. Still, the main part is made of black plastic, like a border around the vehicle’s perimeter. The central part is given a massive silver diffuser, and the sides are added two oblong fog lights. At the bottom, on the right side, there is a double exhaust system nozzle. As we can see, the Kia Telluride has made a splash in Russia for a reason. The SUV has an original appearance and excellent equipment.

The interior of the novelty also stands out for its brutal qualities, expensive and at the same time rough. Among the finishing materials, there is a place for leather, good-quality plastic, as well as metal and plastic inserts “like wood.” Koreans installed a four-spoke small nice multifunction steering wheel in front of the driver. It received a small diameter, thick rim, trimmed with quality leather.

There are spokes with levers and joysticks on the left and right, allowing you to control some of the functions of the Kia Jeep Telluride. Then placed the dashboard, which has a bright tachometer and speedometer. Between them, there is a place for a large and informative onboard computer, which provides all the data about the most important characteristics of the SUV. 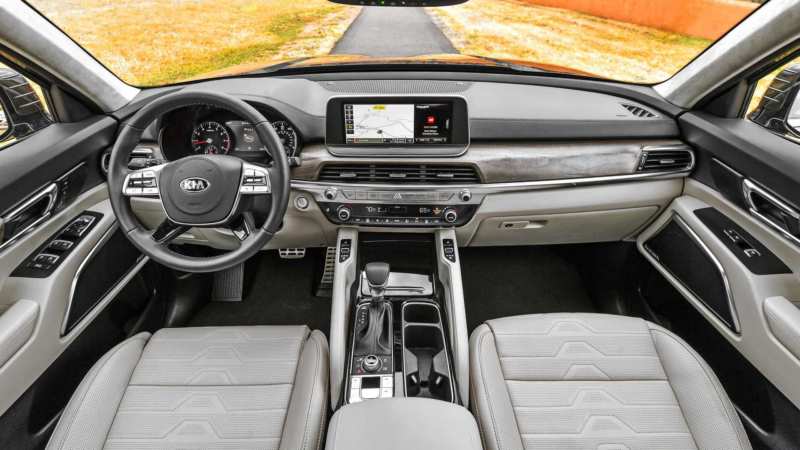 The results of the World Car of the Year 2020 competition were published not long ago, and the KIA Telluride won it.

Next, the view falls on the dashboard, which looks quite massive and has a lot of decor in the form of chrome trim. At the very top is a wide 10.25-inch entertainment center screen (the basic KIA Telluride has 8-inch displays). The ventilation system deflectors are similarly extended in length.

Below, several keys allow you to adjust the interior options, the music system, and the climate system. Almost everywhere, there is a kind of elongation. The tunnel itself is wide and high. It boasts an abundance of elements. These include an elegant gearbox selector, pockets for things, buttons and washers, as well as a massive armrest. The latter has a large compartment for food storage with a refrigerated unit. 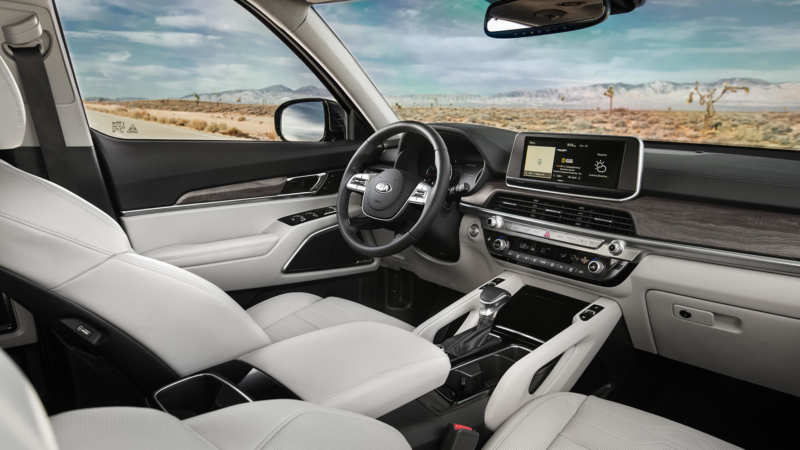 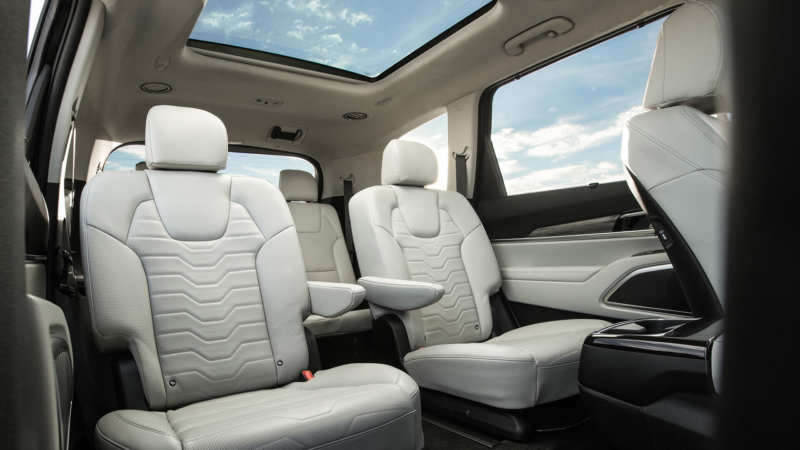 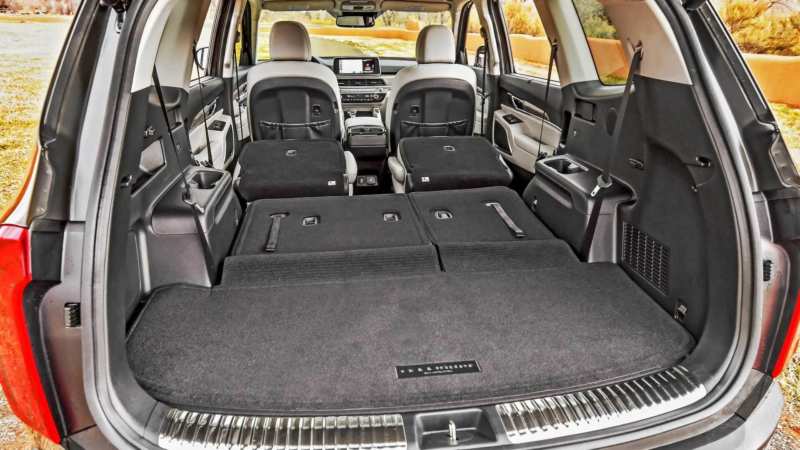 For the rear suspension, the engineers provided a towing package as a separate option, which aligns the suspension. With this package, the Korean can tow a trailer weighing up to 2,268 kg.

The Korean engineers are especially proud of the seating. The KIA Telluride cabin itself is designed for 7 or 8 seats, depending on the configuration. Any seat is covered with durable leather, equipped with a very soft filler and good side support. In addition to the driver’s seat, passengers can also enjoy heated, electrically adjustable seats. The “cooler” Kia Telluride 2020 options will even get ventilation.

On the second row, the seats have armrests and can also be equipped with ventilation. In addition to this, the rear passengers will be happy with separate “climate” ducts, which allow you to adjust the blowing angle. As for the rear 3-seat row, it is a sofa, designed for three people. Separately, it is worth mentioning about the trunk. By default, it has a volume of about 595 liters (American EPA methodology). However, having removed middle and back row seats, you can already achieve 1,302 and 2,464 liters of usable space, respectively. A flatbed will also be available, making it easier to transport.

Kia Telluride’s fuel consumption is between 10.2 and 11.2 liters per every 100 kilometers in mixed mode (the front-wheel-drive version always wins in this regard). According to the manufacturer, the car takes 7.6 seconds to accelerate the 1.8-ton SUV from zero to 100 km/h. 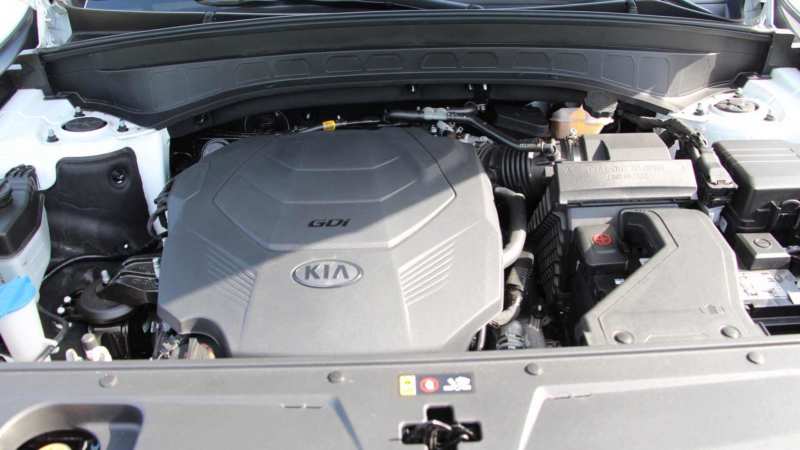 The basic versions already provide for the engine to work together with an 8-speed hydromechanical automatic gearbox, which knows how to automatically switch to parking mode if any of the doors open or the power plant is switched off. All torque forces are transmitted to the front wheels. However, if you pay extra, you can install a four-wheel-drive system, which has an electrohydraulic clutch to connect the rear axle. It has six operating modes – Eco, Smart, Comfort, Snow, Sport and Lock. By default, 100 percent of torque is transferred to the front wheels, but up to 50 percent can be transferred to the rear wheels, depending on which driving mode is selected.

The characteristics of the KIA Telluride imply the use of front-drive architecture, which is also used in the KIA Sorento and Hyundai Santa Fe models. The platform is distinguished by the engine’s transverse location and a load-bearing body, which consists of high-strength steel by almost 60%. “Korean” received a fully independent suspension, which has passive shock absorbers, steel springs, as well as stabilizers transverse stability. The front end has a McPherson-type suspension, while the rear has a multilevel structure.

Despite its size, the vehicle is easy to steer with rack-and-pinion steering with an integrated active electric booster. To stop such a large SUV, powerful brakes are required. Koreans understood this, so they equipped the car with 340-millimeter disc brakes in front and 305-millimeter rear brakes (front ventilated).

For a modern crossover, only the latest safety and comfort systems should be installed. Despite the minimalism in the cabin, the Koreans have equipped their SUV with an abundance of safety systems and assistants, which also make it more comfortable to drive. For example, the KIA Telluride safety features:. 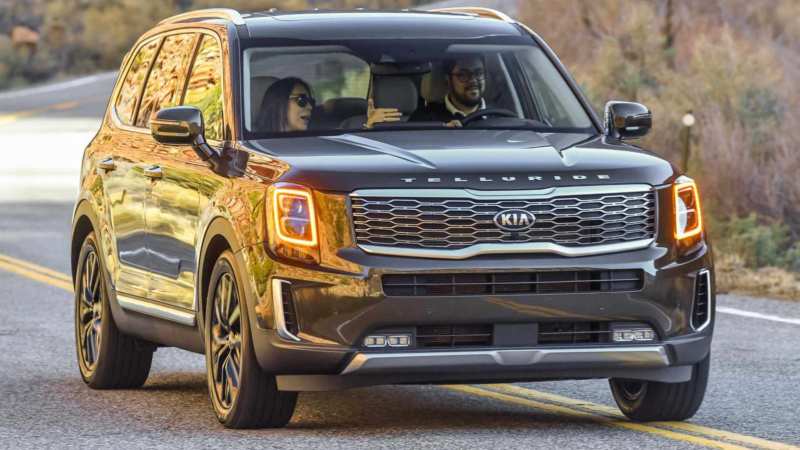 Price in Russia KIA Telluride in the top configuration will be at least 3 200 000 rubles. For the buyer of this version the company will equip the crossover:

While driving the car

It is no accident that the Koreans won the World Car of the Year 2020 contest. The car has shown itself well on the American market and in Canada. This is partly due to the price, which is clearly lower than that of other “classmates.” In addition, the crossover has received an original appearance, high ground clearance, comfortable, comfortable, and spacious interior, as well as a roomy luggage compartment.

The car can be safely used as a family car. There are also versions with all-wheel drive, an abundance of electronic systems and assistants. The Koreans have tried to make a good car in terms of price/quality ratio, and it is clear that they are succeeding in the market. Many expect a lot from the Kia Telluride on the Russian market, but how it will prove itself can only be known over time.

You are advised to read the article: History of Kia Motors 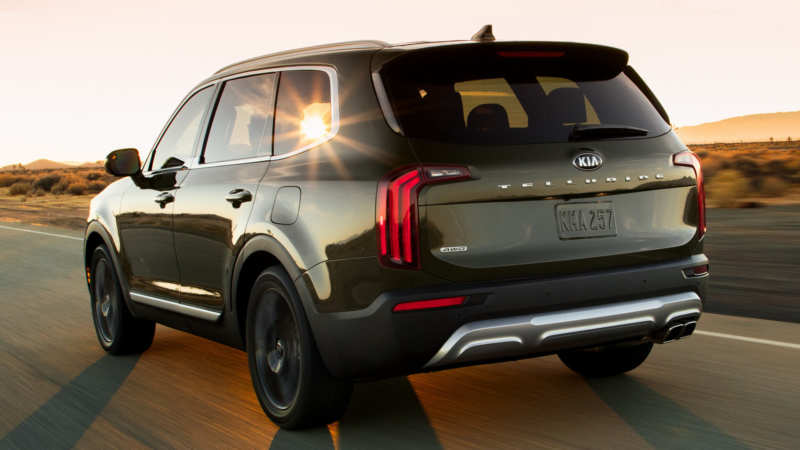 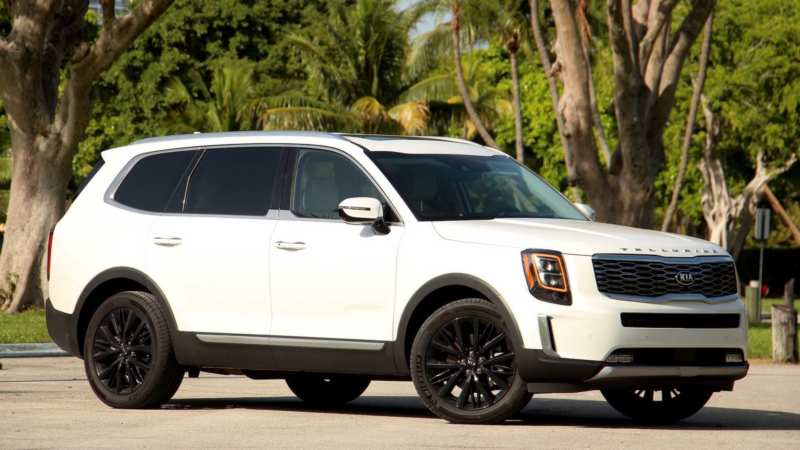 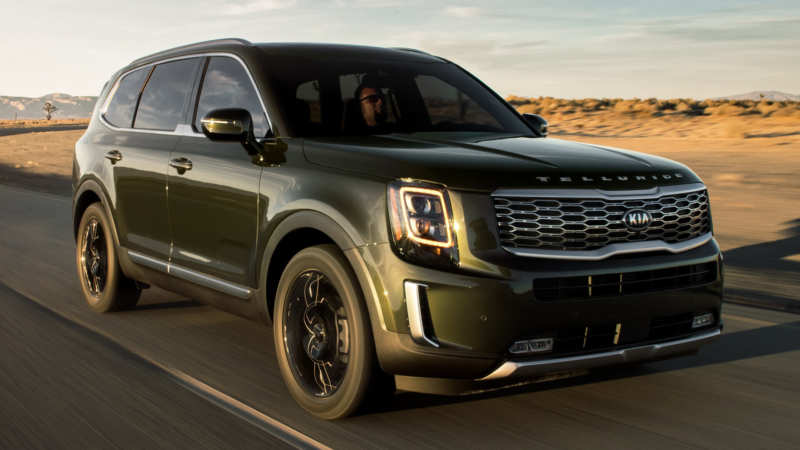 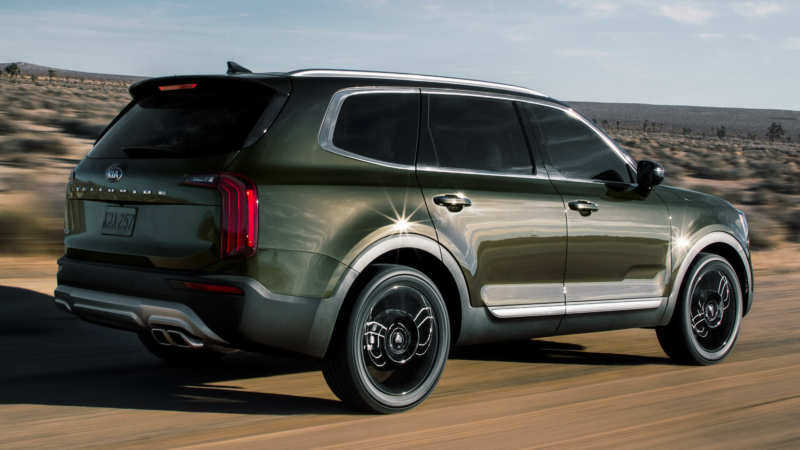 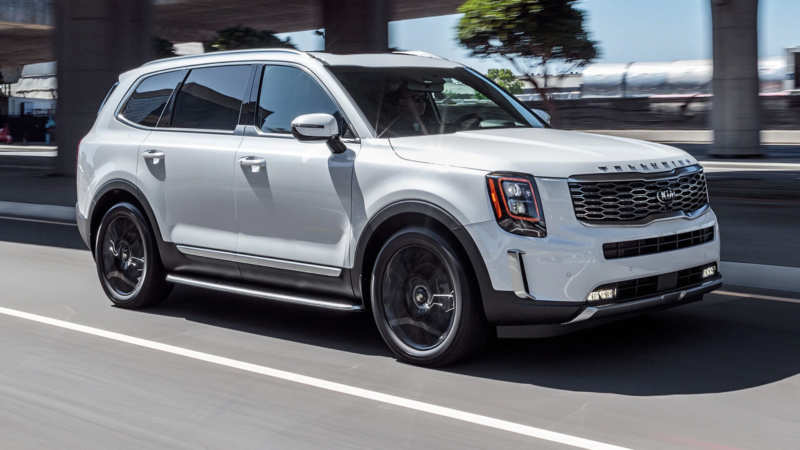 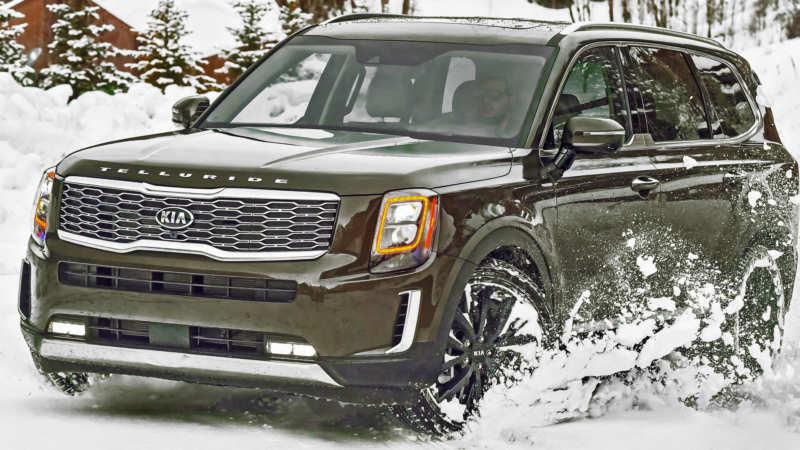 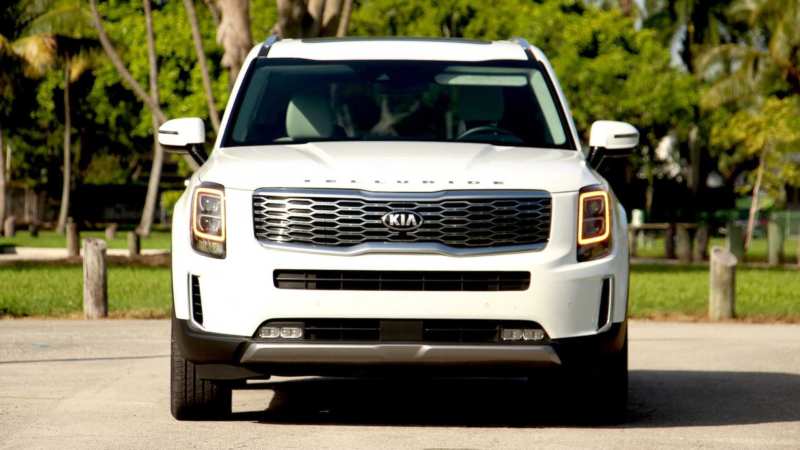 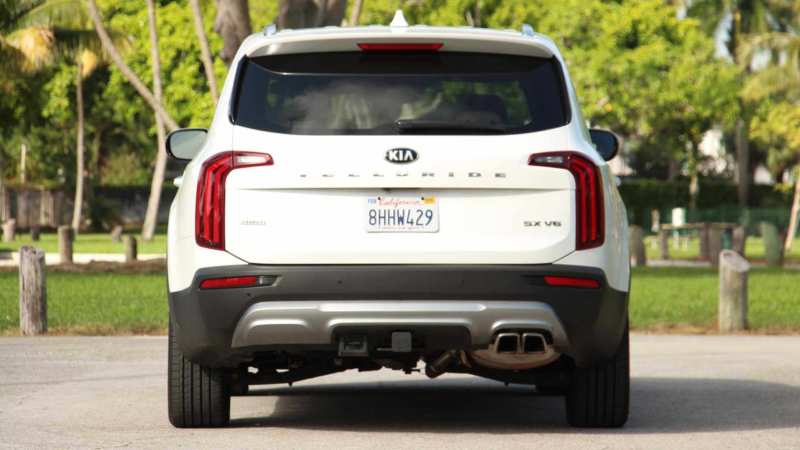 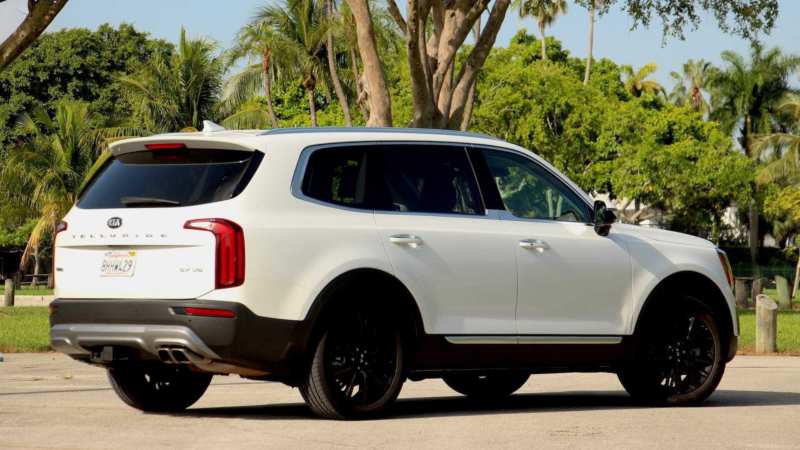