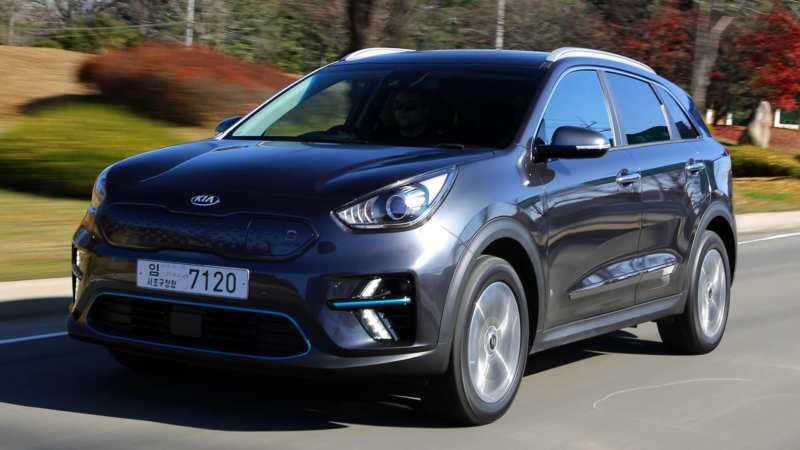 The Kia Niro is a hybrid compact crossover produced by the Korean Kia Motors Corporation. The novelty was presented in 2016 at the Chicago International Auto Show. This car is a serial vision of the conceptual crossover of the same name, which was first presented to the public in September 2013 in Frankfurt.

For European car enthusiasts, the novelty was shown almost immediately in Geneva, and at the end of 2016 it was introduced to the main world markets. It became a new class of HUV – Hybrid Utility Vehicle. And in May 2018, the Kia e-Niro all-electric crossover was shown in Korea, which was already officially shown in October at the Paris Motor Show. The whole model range is Kia.

No matter how you look at the body of the electric car Kia Niro EV, it looks very nice and stylish from all sides. So you have to give credit to the Korean engineers. Of course, looking at the photos of the Kia Niro, it is not so difficult to understand that the Korean crossover did not get a traditional internal combustion engine. The exterior sometimes gives it away. The car is devoid of a lot of air intakes and systems, and it also stands out for its increased amount of relief, which improves aerodynamic performance, which is very important for electric vehicles.

While the new Kia e-Niro retains the proportions and styling of its hybrid variant, experts have tried to make small design changes to reduce drag on oncoming air currents. 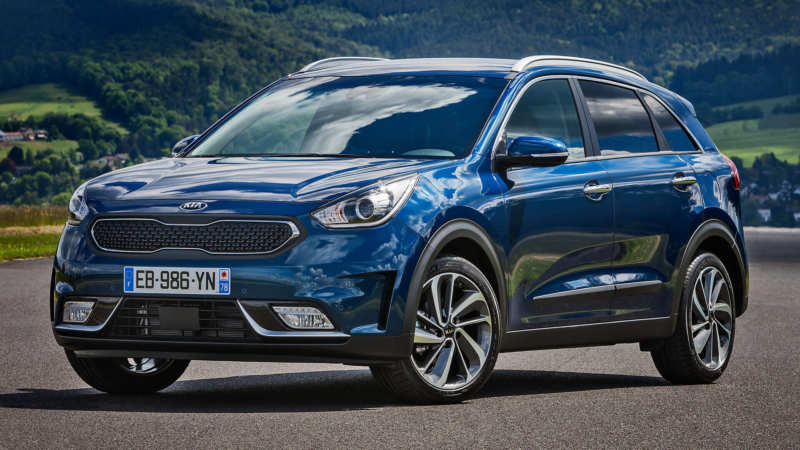 The Korean specialists have made the front part so that it looks very stylish and bright, despite the electric affiliation of the crossover. Although it is a small parkette, it has a fairly high landing, but lacks significant length. On the other hand, there are no problems here with the decorative elements already found on the hood. It boasts light recesses that can be found all over its surface. On the sides of the lid there is room for massive triangular headlights, which accommodate LED infill.

The central part of the front bumper of the electric Kia Niro is equipped with an air intake system, which has a traditional shape. It was decided to change it a little bit here. Standard cars have a large grid, while the electric car got a grille covered by a strip of body with small holes, as well as a cover that covers access to the charging compartment. The front bumper also looks very aggressive. Here you can see as many as three auxiliary holes for air intake. 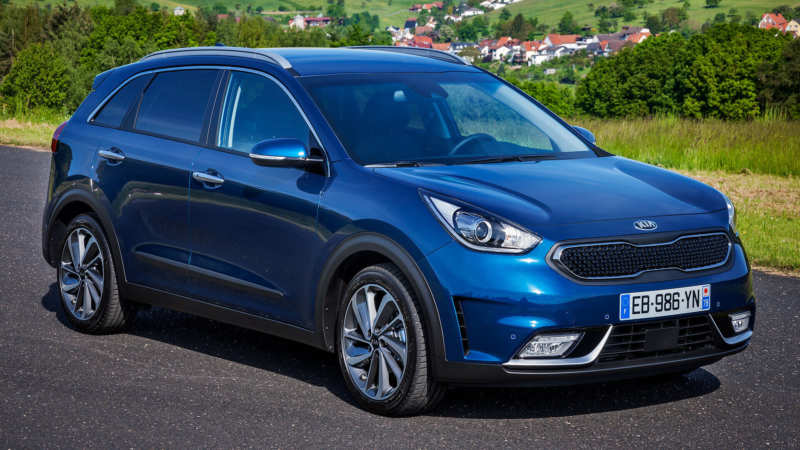 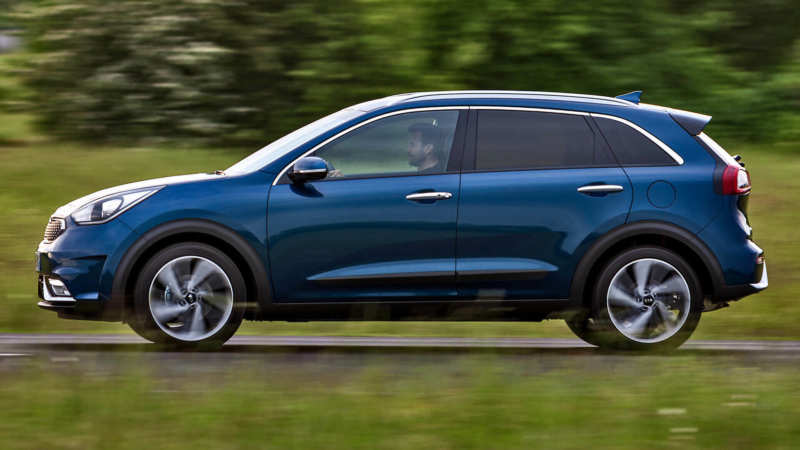 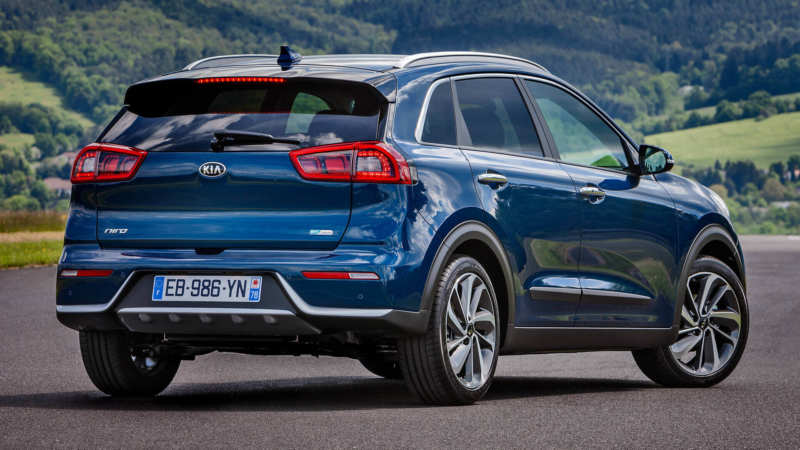 One of them is placed in the center and has a trapezoidal shape, and the perimeter is trimmed with a thin blue line. Two more grilles are placed on the sides, but they are rather triangular in shape. In addition, they are equipped with fog lights, as well as decorated with the already familiar blue stripes. The side of the Kia Niro EV looks more laconic. Here almost immediately you can notice the presence of very long windows, which have a chrome perimeter and quite wide uprights. If anyone thought that this is all the chrome elements that can be seen here, they are deeply mistaken.

The Korean engineers also used chrome for the door handles, part of the side mirrors, wheel rims, as well as special decorative inserts in the lower part of the body. Adds its own flair wavy relief, collected on the doors and wheel arches. The height of ground clearance is average enough – 160 millimeters. As for the hybrid variant, the electric version also has a wide palette of colors of a body and some variants of “rollers” design. And so, the crossover relies on 17-inch aluminum wheels that have a two-tone finish and a diamond coating.

If you look at the stern of the Korean crossover, it also looks quite aggressive, not inferior to the front. Here, as well as in many similar cars, it is possible to divide the stern into two parts – upper and lower. The first one is placed under a slope, and the main one is perpendicular to the road surface. The upper can boast of such decorations as a massive visor, which has a line of brake light repeater, as well as a large rectangular window.

And the lower part got a wavy relief, and in large quantities. There are also huge headlights and nameplates, which indicate the name of the vehicle. The rear bumper has a lot of stepped relief and a couple of recesses on the sides, in which “fog lights” were harmoniously integrated. But the aggressive completion of the exhaust is greatly lacking here.

Inside the Korean electric crossover there are many details that allow you to easily determine the belonging of the new model to the company KIA. As for the finishing materials, it is difficult to consider them chic, but it is impossible to call them cheap. Interior Kia Niro EB 2021 boasts of a quality fabric, plastic, leatherette and even metal inserts. And thanks to a modern multimedia system and comfortable seating no one will be bored, even on long trips. Thanks to the new glossy black and blue door trim, the futuristic atmosphere is even stronger.

Immediately in front of the driver is placed a three-spoke small steering wheel, which has a comfortable thickness for the hands. It has a large number of mechanical keys, which seriously facilitate the life of the driver. Behind the “steering wheel” engineers placed a digital dashboard, which allows you to easily control the current parameters of the car. In addition, engineers have equipped the “dashboard” with a special indicator, which prompts with what force should be pressed on the “gas pedal” in order to achieve the most economical energy consumption. 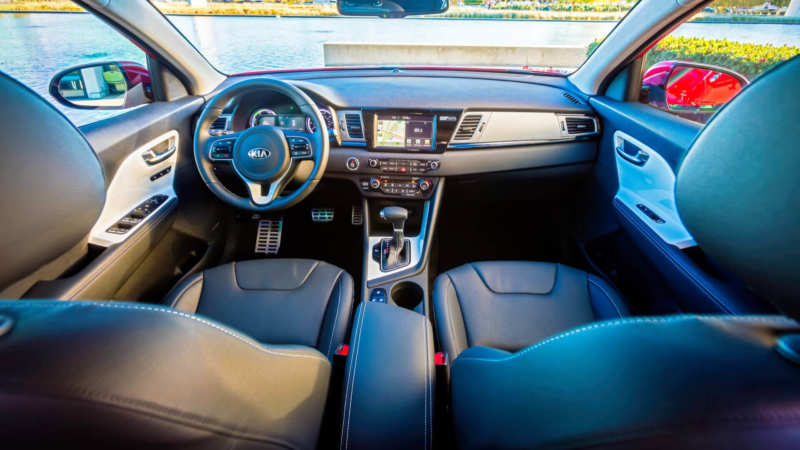 The interior of KIA Niro is designed for five adult passengers. Each has a comfortable seat in fabric or leather trim and with a soft filler. Speaking about additional options, there are not many of them, so they fully depend on the version of the vehicle. However, each version can already boast the function of heating and ventilating the front seats, side support, as well as electric adjustments. Interestingly, the heating system can automatically reduce the degree of heating after a specified period of time.

The fully electronic version of the Kia e-Niro is distinguished by decorative inserts of blue color in the air ducts of the ventilation system. Similar ones are placed in the Plug-In Hybrid version.

Speaking about the central console of the car, it is quite modest in size, but there are plenty of analog controls. On the top of the placed an 8-inch entertainment system, air vents of the climate system of the vertical type and a few blocks with mechanical buttons and washers. One of them just allows you to adjust the climate system. 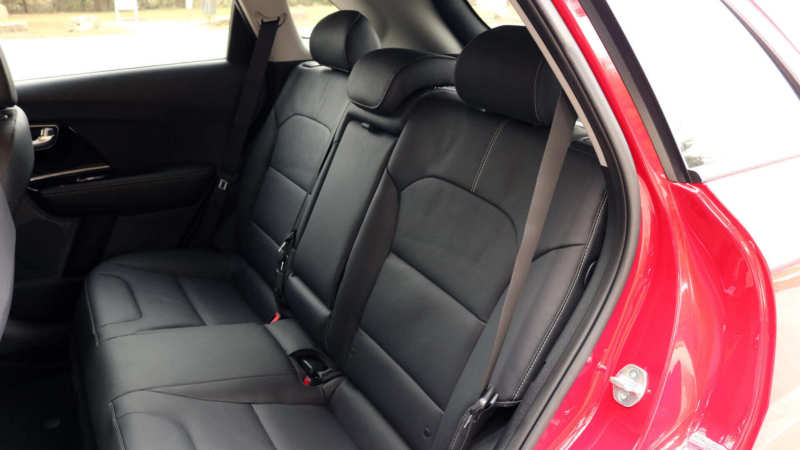 The next is not the highest tunnel, which stands out for its width. In addition to the technical block it has several pockets for things, as well as a convenient and functional armrest. The tunnel has got the button of electronic “handbrake” and a large washer. The Korean specialists have provided an armrest and headrests for rear passengers. Since there is no transmission tunnel here, a person sitting in the center can easily and comfortably sit on the second row. The volume of the trunk in the camping condition is 450 liters.

However, if necessary, it can be increased by removing the rear row, which will provide about 1,400 liters of useful space. In general, the novelty cabin has the corporate style of other cars of the company from South Korea. Separately want to highlight the quality of assembly and finishing materials, which can also include an elaborate ergonomics, which although loses the best competitors from Germany, but has an excellent level for its price. 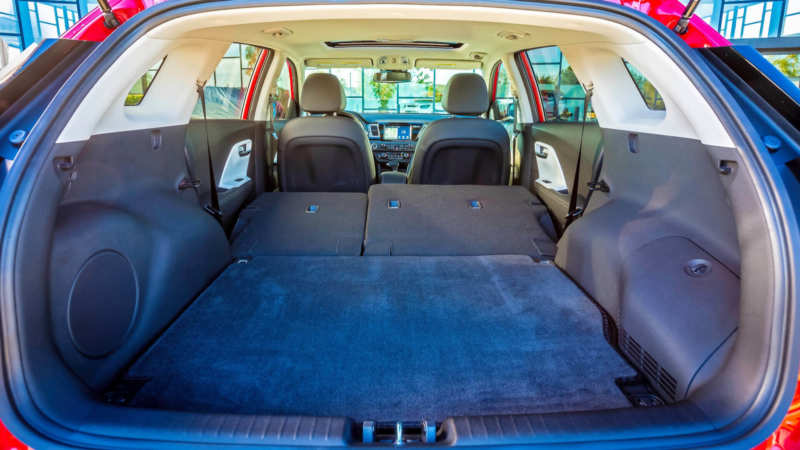 The Korean crossover is propelled by an electric motor that has a capacity of 150 kW/204 “horses” (395 Nm). This allows the “Korean” to spend only 7.8 seconds to accelerate from a place to the first “hundred”. In addition, there will be a 136-horsepower 100 kW electric motor (395 Nm). With it, the car accelerates to the speed mark of 100 kilometers per hour already after 9.8 seconds. 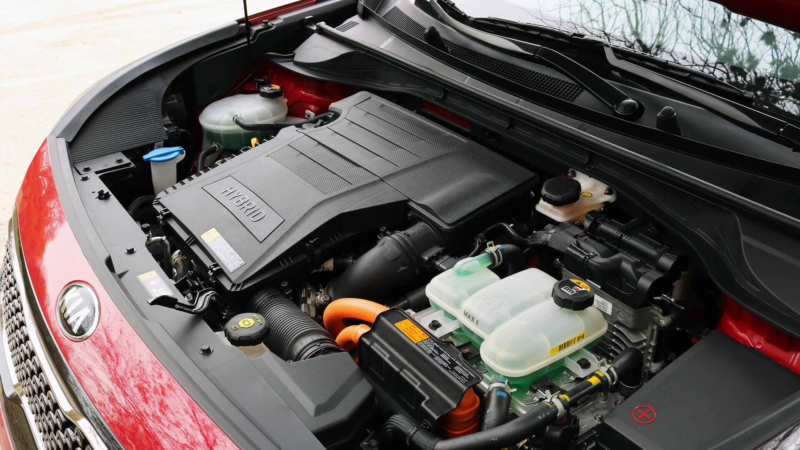 For the weakest version there is a battery with a capacity of 39.2 kWh. This should be enough for 312 kilometers without recharging. But for the more powerful version decided to install a block of batteries, the total capacity of which was 64 kWh. If we believe the preliminary data, to charge the battery from zero to 80 percent using 100-kilowatt recharge, it will take about 55 minutes. The “older” model allows you to drive about 485 kilometers on a single charge. Some test drives have confirmed that the car only needs five hours to charge fully, even using not the most chargers.

As the basis for the new electric model Korean engineers decided to take a modern hybrid platform, which implies independent suspension “around the circle”. In the front there are McPherson struts, and in the back – multilever design. The Kia e-Niro 2021 can be controlled using electric power steering. The braking system received disc brakes (ventilation is provided for the front ones).

In order to achieve maximum effect, the Koreans have provided their new electric model with advanced systems, including regenerative braking system, CGC and PEC technologies. The latter regulates the coasting motion, and the latter is able to control the electric power supply based on special predictable algorithms.

Since this is a modern model of the Korean company KIA, it has received a large number of the most innovative assistants and systems, which should increase the overall degree of safety. It is important that the lion’s share of such systems is not available from rivals for similar money. Thus, the Kia Niro EV’s arsenal boasts:

It is also important to note that the KIA e-Niro received a body made with the active use of strong grades of steel. This has had a good effect on the overall safety level of the crossover.

The price of Kia Niro in European countries starts at $39,500. For this money the car is equipped: 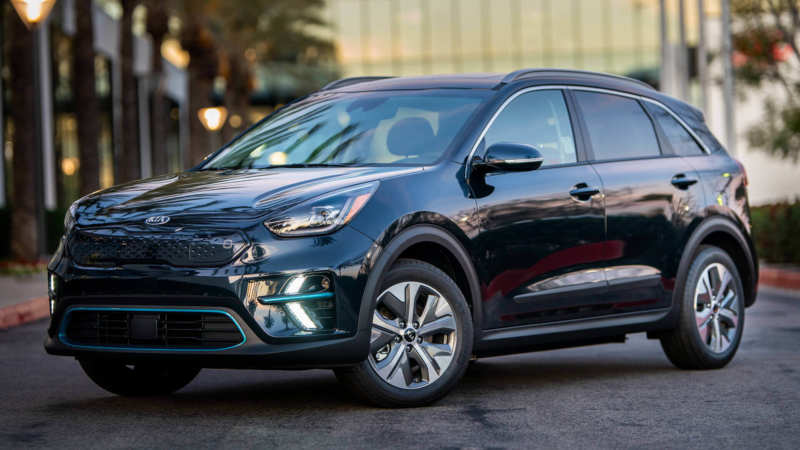 Ordering additional options can increase the price of the Kia Niro 2021 by $5500. These could include:

Competitors in the “Korean” is not so much. The main competitors of Kia Niro are Nissan Leaf and Toyota Prius.

So, what can be said in the end? Was the Korean company right to launch a full electric model after the Kia Niro Hybrid? Opinions here can differ, but still the Koreans took the risk and hardly anyone can say that they miscalculated. This model debuted on the European market much earlier than most companies from Europe itself. It is a stylish, dynamic, practical and capacious car for rather accessible money.

Of course, it can not boast excellent range, excellent dynamics or all-wheel drive, but if we consider its cost, much can be forgiven her. The only pity is that in our country is still very poorly developed very necessary infrastructure for electric models. 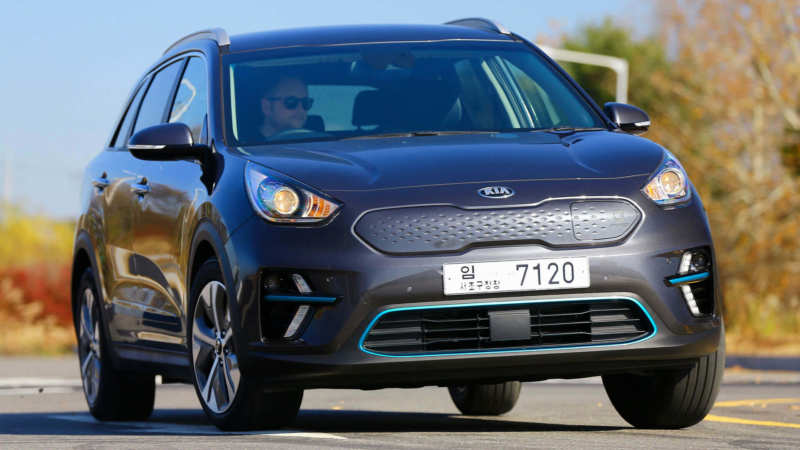 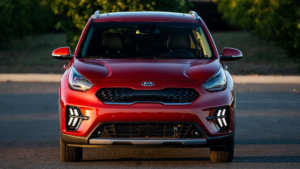 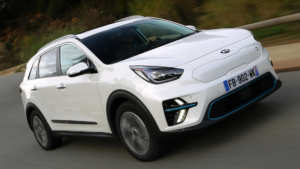 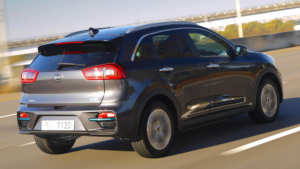 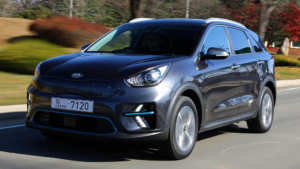 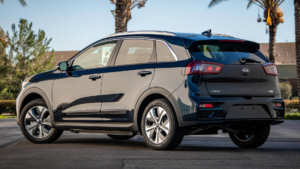 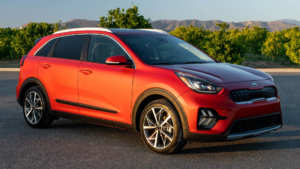 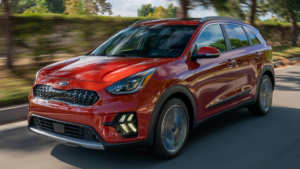 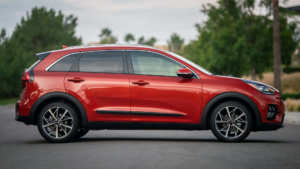 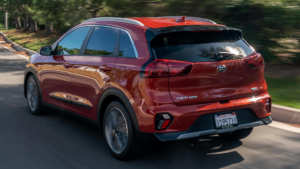