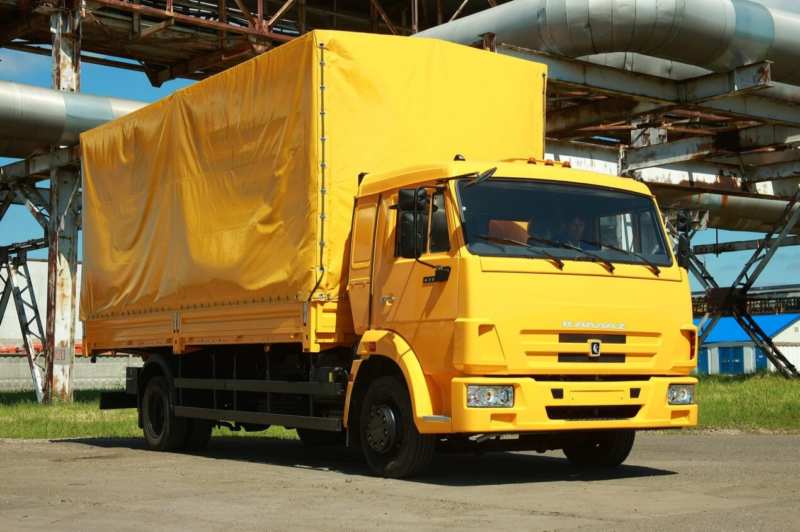 With the beginning of the XXI century the Russian Federation required medium-duty vehicles. Just for this purpose, the Kama Automobile Plant was able to develop an average truck with the marking 4308. It had technical characteristics that could compete with other trucks, as well as what could progress. The truck received a reliable engine CUMMINS, braking system by HALDEX, fuel component by BOSCH and a proven gearbox by ZF. Speaking in general, when the KAMAZ 4308 was created, more than 18 popular companies of the world automotive industry used components.

Serial production of the car began in the autumn of 2003. The car was very economical in terms of fuel, and also differed in performance and functionality. It was able in a short period of time to become popular between carriers and private entrepreneurs of small and medium businesses. This article has an overview of KAMAZ 4308 and a catalogue of technical characteristics. It is also possible to learn about its payload and parameters. The whole model range is KAMAZ.

This medium-duty truck comes with a famous cabin, which is installed on more load-lifting models. Small changes have been made only to the grille and overlays on the sides. However, the latest innovations have provided the cabin with a more modern and pleasant look.

Moreover, in order to better combat corrosion, the company for the first time applied a new method of priming and applying paint. The truck purchased a foreign driver’s seat with Grammer air suspension. Together with the suspension cabin, this made it possible to move around the rough terrain of the Russian Federation more comfortably. 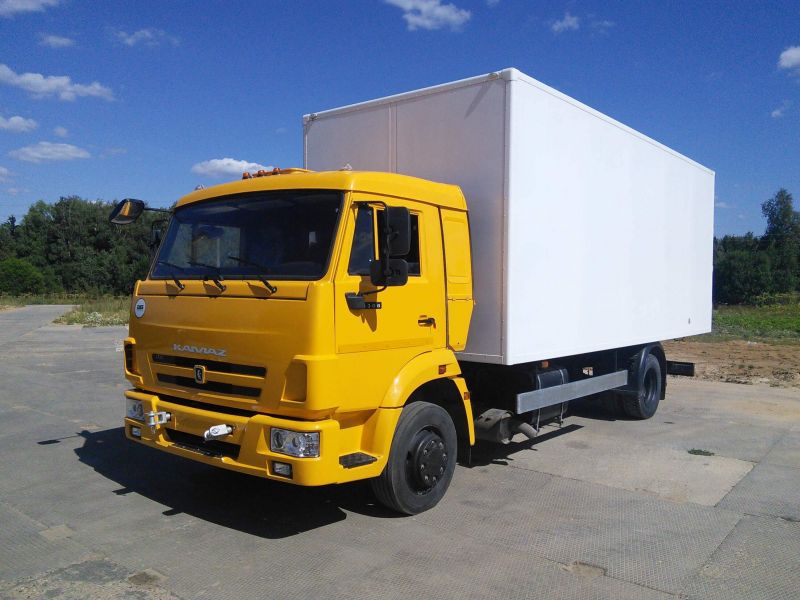 A radiator grille together with plastic panels to the Kama Automobile Plant comes from Ivanovo. The front optics have a rectangular shape and were manufactured by Hella. The plastic dodger is made with the use of impact resistant material, which is fully frost resistant, which significantly branches out the area of car use. More advanced cabin shows that the company strives to be competitive and wants to constantly develop.

The armchairs of the medium-duty machine are made by Grammer, which is located in Germany. Most of the companies that occupy the leading niches in the world are interested in its services, so in most cases the comfort for the driver does not lose even to many international brands.

The design component of the cabin has been well thought out and developed. It has a large number of small elements, which allow you to recognize and distinguish the variations in the finish of the cabins in similar models. The design of the cabin was perfectly equipped not only on the aesthetic side, but also on the comfort side for the driver and passengers sitting next to him. 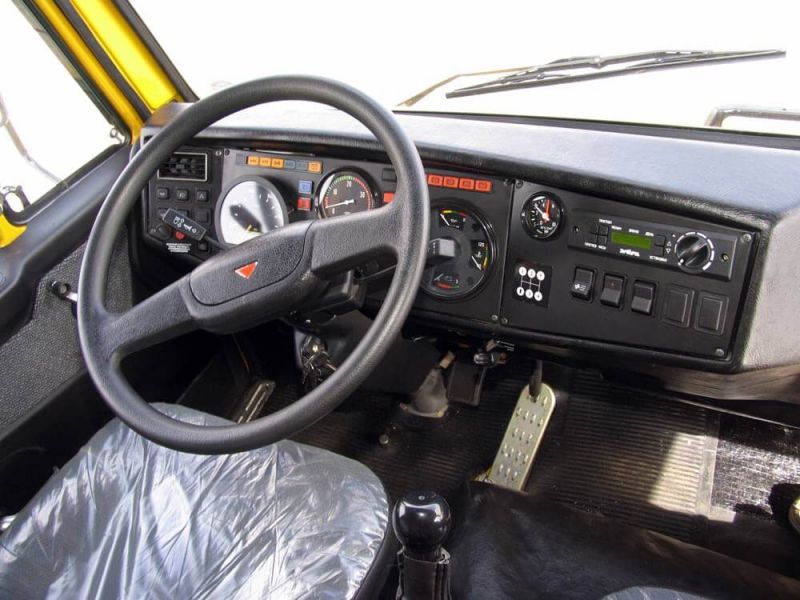 The torpedo in front of the chauffeur has a rounded shape. Availability to all system components is greatly simplified. The locks, together with the internal handle designs, are very similar to the VAZ locks in terms of external layout and functionality. With this cabin KAMAZ 4308 can be used in long journeys and in urban areas. Inside the compact truck there is no longer any presence of painted metal panels, which were so common for customers.

The cabin itself was treated with cataphoresis primer, which can almost fully save from the most pressing problem for the metal – corrosion. The cabin was installed with a quarter of elliptical springs. The design of the vehicle is always being improved and improved, which allows the machine to meet international standards for ecology and reliability.

The car company did not have the right powertrain for a compact truck. We could have started the development of the engine from scratch, but it would have been a sign of long lead times, as well as a huge waste of money that simply wasn’t there. What did the Kama Automobile Plant do?

It was decided to start cooperation with the American company Cummins, which provided the necessary variation of the power unit. As soon as the cooperation started, the 4320 purchased an old American engine that still met the environmental requirements of Euro-2. A little later, the engines were delivered improved, which already met the Euro-5 environmental standards. They also had a modern fuel supply system – Common Rail. 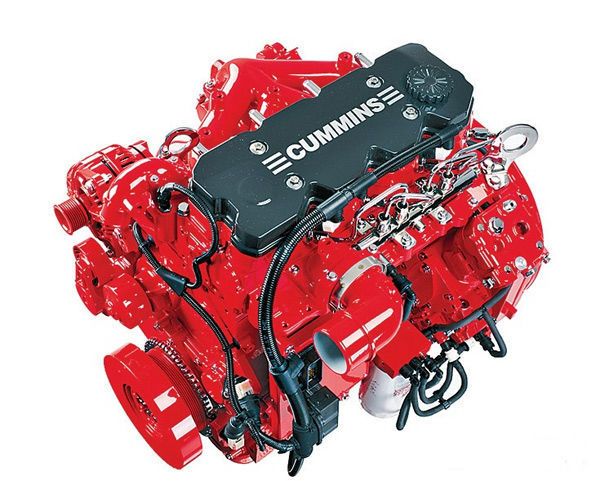 KAMAZ-4308 engines were produced by a well-known American company – Cummins at the Chinese factory Dongfeng under license. Later, the engine had a popular Common Rail fuel system and met the environmental requirements of Euro-5.

The maximum speed was 100 km/h. Such power units have acceptable economy and good traction. Six-cylinder engines do not have such a big noise of work, and they also have a small degree of vibration. The width of the cylinder walls was increased, which made it possible to waste the unit during repairs.

The cylinder block itself, together with the pallet, is protected by a steel plate that provides improved stiffness and reduces noise. The engine had a four-valve cylinder head and the valve guide bushings were assembled in a solid casting. Water pump, fan, generator and air conditioner compressor drives have a multi-ribbed belt with an automatic tensioner. The fan was placed on the front toe of the crankshaft, which is ideal for cabover cars.

Thanks to the viscous coupling of the fan, the frozen power unit is heated rapidly, which is very useful, because the blanks with a cold motor increases vibration. By the way, the possible cause of increased vibration is the strong stiffness of the cushions of the power unit. Exactly the same engine, but with a volume of 3.8 liters is put on a gas truck “Valdai“, and there are no vibrations or shocks. The fuel tank has a capacity of 210 litres. Fuel consumption per 100 kilometers is about 14 liters.

If Kamaz 4308 is equipped with such high-quality modern diesel engines, it is logical to conclude that it simply needs a good corresponding transmission. Therefore, for the medium-duty truck clutch company Sachs, which serves as a subsidiary of the well-known brand in Germany – ZF.

The drive has no significant changes. Initially, the trucks were equipped with Kamaz-141 gearbox, which was the most successful of domestic models, and which was easy to maintain and repair. But very soon the production of own marking gearbox will be stopped. Such parts will be produced by a joint plant created by the employees of KAMAZ and German company ZF.

Taking into account the fact that the new model can be used as a road train, it will be possible to install a 9-speed ZF9S109 as a separate option. A similar European marking is found on most medium-duty trucks.

Switching handle is of hinged type and is installed on the floor of the cabin, after which there is a telescopic traction. Starting from 2014, “ZF Kama” will master the production of gearboxes of automatic type AsTronic, which can replace the present family of gearboxes.

The suspension was designed in accordance with international requirements. Researchers are low-length and have a parabolic design. In order to increase the smoothness of the stroke, the length of the springs was increased to two meters. The front part of the machine has a two-leaf design, and the rear part has a three-leaf design. This suspension device is the most convenient option for repairs even in the field.

Now the plant is developing a rear air suspension for the KAMAZ-4308 truck. It is made on a 2-ballon design, has forged rods and uses silent blocks. The suspension is equipped with an electronic control system and meets all current global criteria.

This design provides the necessary body height for loading and does not fluctuate. There are also rubber buffers at the front, which act as a travel limiter, and hydraulic shock absorbers, providing a good smoothness of movement. The rear ends of the springs are sliding.

The brake system has pneumatic regulation and disc brakes on all wheels. The wheels themselves have a 19.5-inch radius. The main system has a pneumatic disc mechanism with 2-circuit drive.

The cost of the basic equipment of a new medium-duty truck will be estimated from 1 800 000 to 1 900 000 rubles. If we take into account all the superstructures, the cost can increase significantly. The cost of a car with air suspension will be from 2 160 000 rubles. 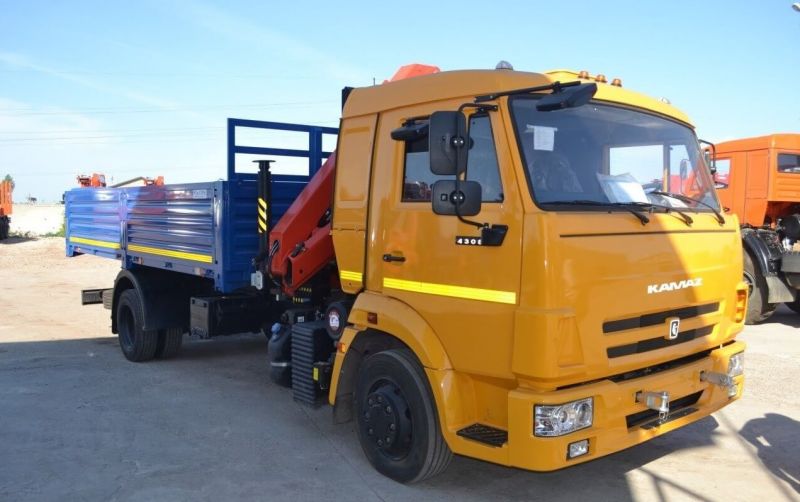 Despite the fact that the model was assembled in a fairly short period of time, KamAZ-4308 turned out to be very successful. It is not as big as its older brothers, it is easier to manage and will be perfect for urban conditions or for small and medium businesses. The appearance of the cabin has improved slightly, leaving a recognizable touch of the car company.

It is possible to install an air suspension, but for an additional fee. Inside the cabin is a little more comfortable, although the quality of parts and materials still suffers. Everything is intuitive and intuitive, and it is easy enough to reach the right controls. 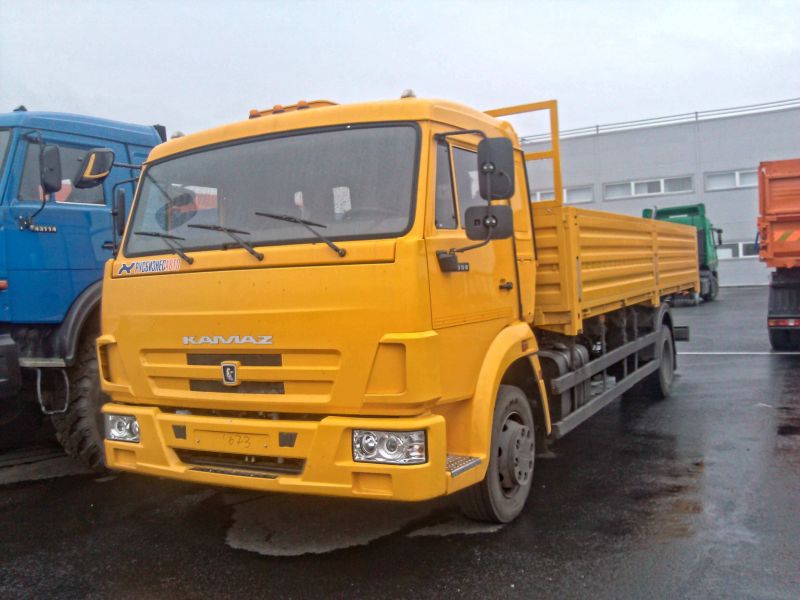 The instrument panel has also been slightly improved to make you feel more comfortable. The driver’s seat has a pneumatic system, which is very pleasing. The power unit is not the most powerful, but it copes with its tasks without much difficulty, although, judging by the feedback, sometimes the power is not enough when the Kamaz is loaded.

Proceeding from this compact truck, it becomes clear that the KAMAZ plans to compete in the market even with foreign models, having a significant advantage – a small cost. 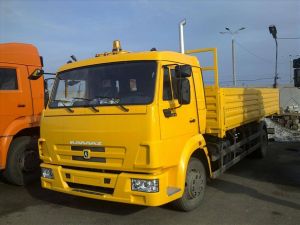 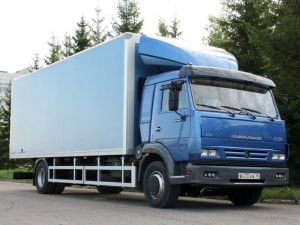 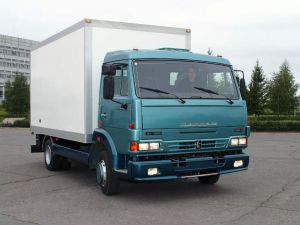 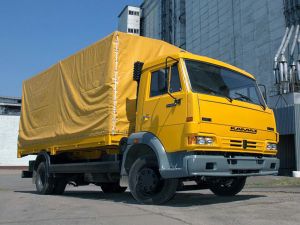 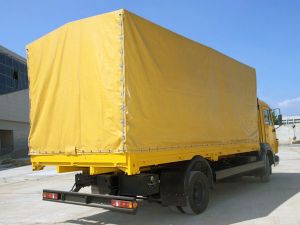 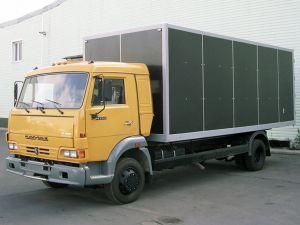 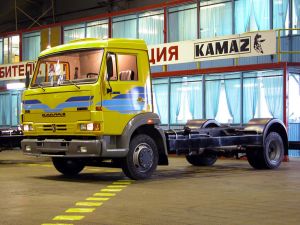 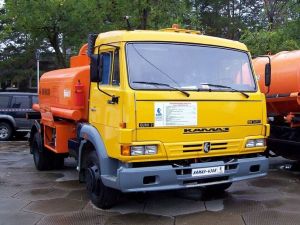 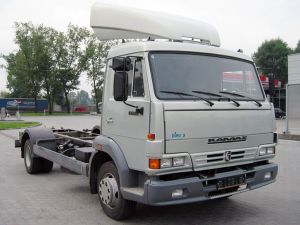