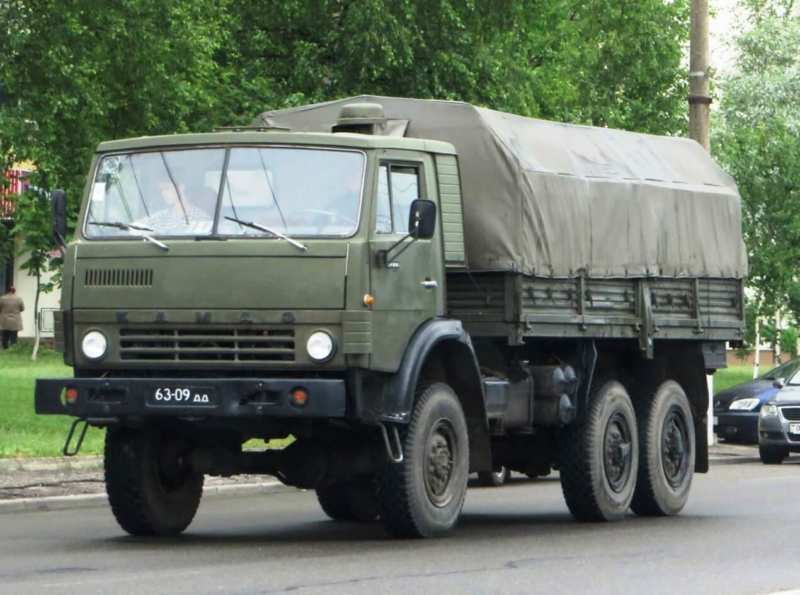 KAMAZ-4310 is a famous cross-country truck with a permanent all-wheel drive system for all 3 independent axles. This article will provide a catalogue of technical characteristics and a catalogue of modifications of the famous truck model. You will learn about fuel consumption per 100 km, how the car drives on the road, its load capacity and see the video of its work. The whole model range is KAMAZ.

If we take the technical condition, then for the 80’s this Kamaz cross-country vehicle was the most excellent off-road truck, which could overcome great obstacles, and was not afraid of steep ascents and descents, could almost “swim” ford, the depth of which reached 1.5 meters. Serial production of this model began in January 1981, just before the 26th Congress of the Communist Party.

The name itself shows that the truck was produced at the facilities of KAMAZ (Naberezhnye Chelny). But few people know that, in fact, KAMAZ-4310 has Moscow roots and was developed by the design staff of the association “ZIL“. The order to develop the off-road vehicle was accepted by the engineering staff as far back as 1960. 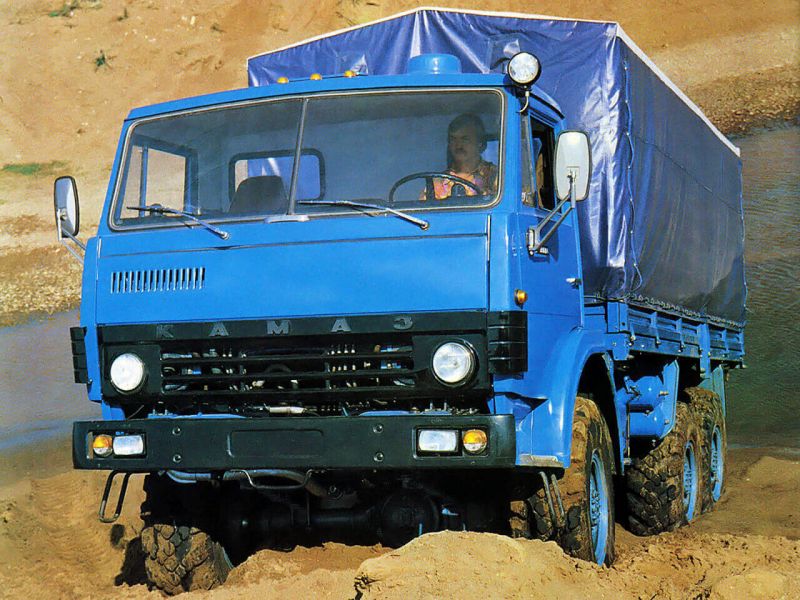 A year later, the technical components were shaken up, and the production took 10 years to complete. For the whole duration of work on the order at the enterprises of ZIL about 12 prototypes of a possible car KAMAZ were collected. It is interesting that during the development they found a considerable number of original technical implementations, which were provided for the engineering staff of ZIL more than 50 certificates of authorship.

The standard equipment of the truck received a completely new principle of operation of the leading axles. The model was equipped with a constant type drive with 4 cardan shafts. The standard configuration was together with the body, which consisted of a metal base, where there was also a tent and frame. The truck was used to transport passengers and various cargoes of increased tonnage.

Model KAMAZ-4310 can work in different climatic latitudes. It can withstand temperatures from -45 to +50, so it is quite popular in many countries around the world.

The cabin is made of 3 seats and has thermal insulation, which together with the noise insulation allows you to feel more comfortable. They have not forgotten to introduce an independent calorifer heater. The cabin can be tilted forward with a hydraulic lift.

The basic equipment has no sleeping space, but can be installed as a separate option. The driver’s seat is sprung and can be adjusted in terms of length, weight and backrest inclination. In addition, the manufacturer provides tropical seats. 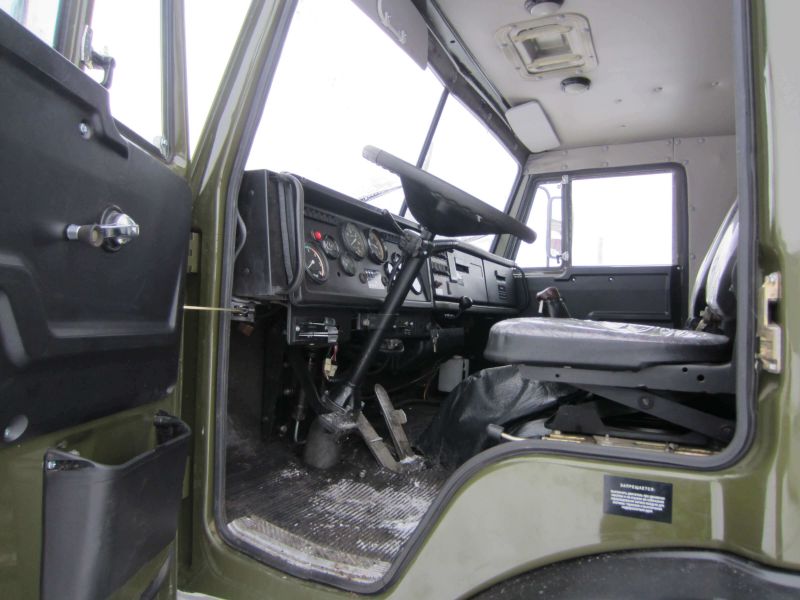 It is clear that the European analogues of the KAMAZ-4310 salon are still very far away, but at the time of production the cabin was quite cozy and allowed not to get so tired when working for a long time. The seats themselves are quite simple type. The instrument panel looks in Spartan style, but everything that is necessary is placed on the dashboard.

It should not be forgotten that many of the devices are used by the army, where comfort is not so important, and preference is given to cross-country ability, reliability and functionality. It is possible to lower the visor in bright sunny days, both for the driver and the passenger.

The KAMAZ-4310 was equipped with the KAMAZ-740.10 powerplant, the strength of which was 210 horses. It also provided for a better modified KAMAZ-740.20, which already had a capacity of 220 horsepower. Later on, 430-horsepower 8-cylinder engines were installed on the trucks.

It was represented by a 5-speed manual gearbox with synchronizers at 2nd, 3rd, 4th and 5th speeds. The dispenser comes with a two-stage gearbox and a cylindrical lockable planetary differential, which distributes the torque between the permanently connected axle mounted in front and rear axles in a ratio of 1:2.

The dispenser is controlled remotely by means of an electro-pneumatically actuated gearshift. The differential lock is pneumatically operated with remote control.

It has drums and a double-circuit pneumatic actuator. There is a parking brake, spare and auxiliary. The drums have a diameter of 400 mm, and the width of overlays is 140 mm, the unclamp – cam type.

It is represented by a mechanism with a screw, ball nut and a piston rail, which engages the toothed sector of the bipod shaft. Hydraulic power steering helps to control such a large machine. With these reinforcements, the machine runs well even off-road.

The voltage is 24V. The batteries themselves are 2 pieces. There is a generator and voltage regulator. KAMAZ 4310 circuit diagram is presented below. 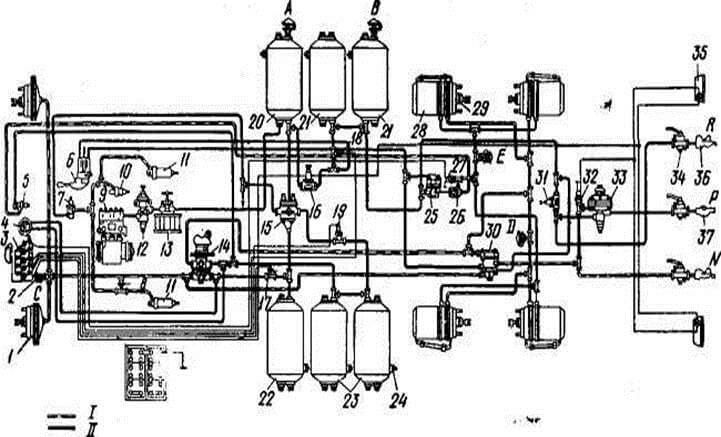 The designers have even provided for the use of a drum winch with a worm gear and a belt brake. The cable can be stretched up to 83 meters. Load capacity ranges from 5,000 to 6,000 kg. The curb weight is 8,410 kg. Gross weight of the truck is 15 000 kg. The maximum speed limit is 80 km/h. Fuel consumption per 100 kilometers at a speed of up to 40 kilometers per hour will be 31 liters.

This flow rate may vary depending on the technical condition of the machine and the operating conditions. The maximum climbing distance is 31 degrees. The machine will be able to climb a ford, which is 1.5 meters deep. The smallest turning radius is 10.8 m. The height of the ground clearance is 365 mm, which is very good.

Here will be presented a catalogue of modifications of KAMAZ-4310. The very first modification was so successful that it began to be produced with minor changes from 1981 to the 1990s. Regardless of the modification, the cabin was equipped with a hydraulic forward tilt system, and a separate option was to install a sleeping berth.

Already after 8 years, in 1989, the plant began to produce additional equipment, for example, in order to help agriculture KAMAZ-43101 was sent, equipped with benches that were cleaned, which resulted in the possibility to transport up to 30 people. In addition to the fact that it is possible to transport passengers, this equipment allows the use of the 2PN-4M trailer. The standard equipment is equipped with a winch and has an extra bed. 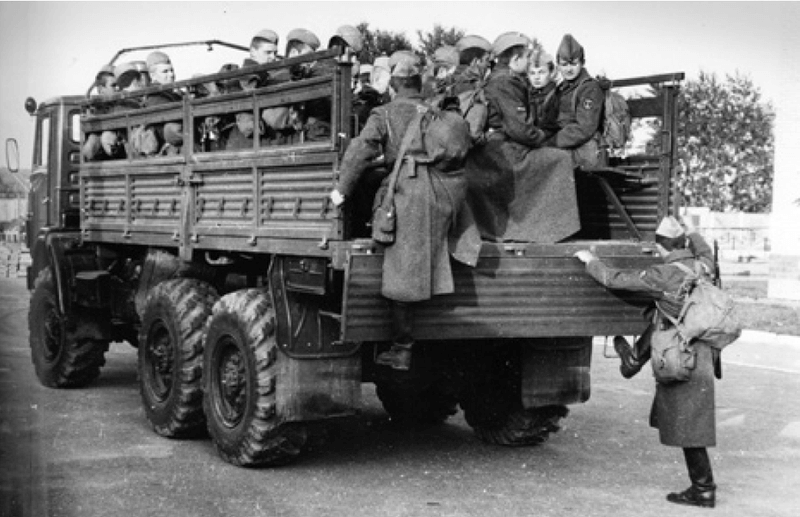 The same year allowed KAMAZ to launch 43106, which differed from the previous version by its reduced own weight, but could take on 1 ton more (7 tons). It could be attached to a trailer, which was often used in the open plan “GKB-8350”, or its variation with folding tarpaulin. The KAMAZ 4310 model could work in hard-to-reach places and implied the presence of a trailer. The truck copes with its tasks perfectly, despite frequent overloads. 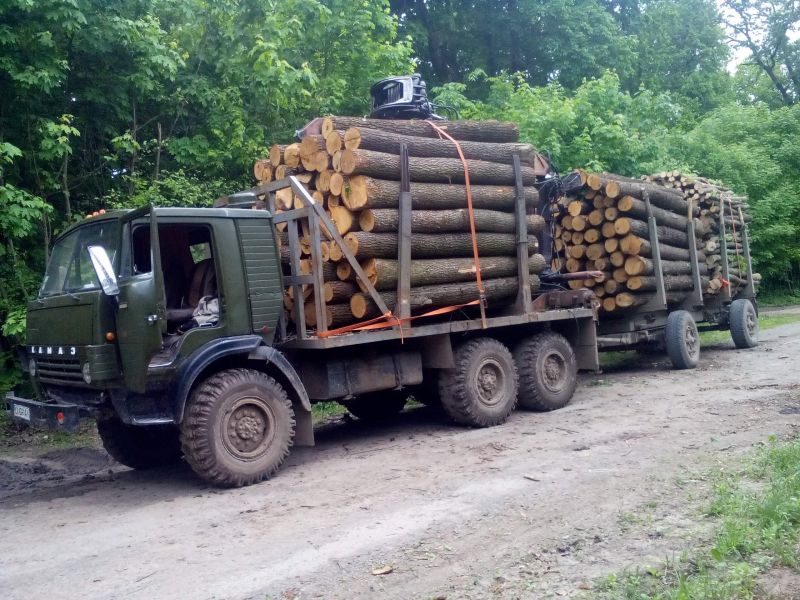 The early 90’s showed everyone a semi-home armored version of the “Typhoon-1”. This modification has a box to carry soldiers, and powerful frontal armor plates that can protect the cabin. Good technical characteristics allowed to take 4310 as a basis for such a modification.

Some may mistakenly believe that this model is the first version of the new anti-terrorist armored personnel carrier “Typhoon”, which was made at the request of the Ministry of Defense of the Russian Federation. However, that is not the case. The debut Typhoons were only shown in 2011. This is a result of the general development of the engineering staff of the automobile company Ural and KamAZ. They were not built on the basis of 4310. 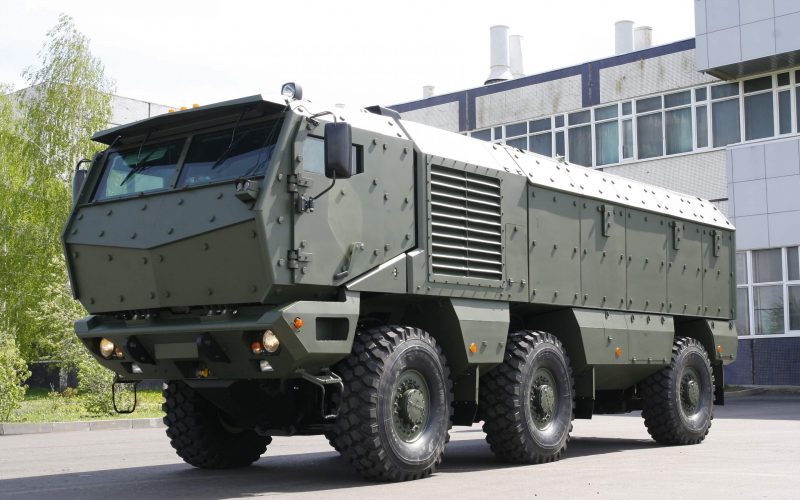 Typhoon-1Takzhe, which is also very interesting, the company released a sports version of the car, which was called C4310. The purpose of production was to participate in rally-raids. When they were building their debut sports car, the specialists borrowed the serial version of KAMAZ 4310. Therefore, the new machine was assigned the index KAMAZ C4310.

Speaking of technical stuffing, the basic power unit (210 horses) was forced up to 290 horsepower due to the introduction of turbochargers and increased fuel supply. In addition, the racing engine had variable profile pistons, torsion dampers, improved lubrication, and a cooling system with a viscous clutch and fan with increased efficiency. The chassis had rigid springs and special shock absorbers. 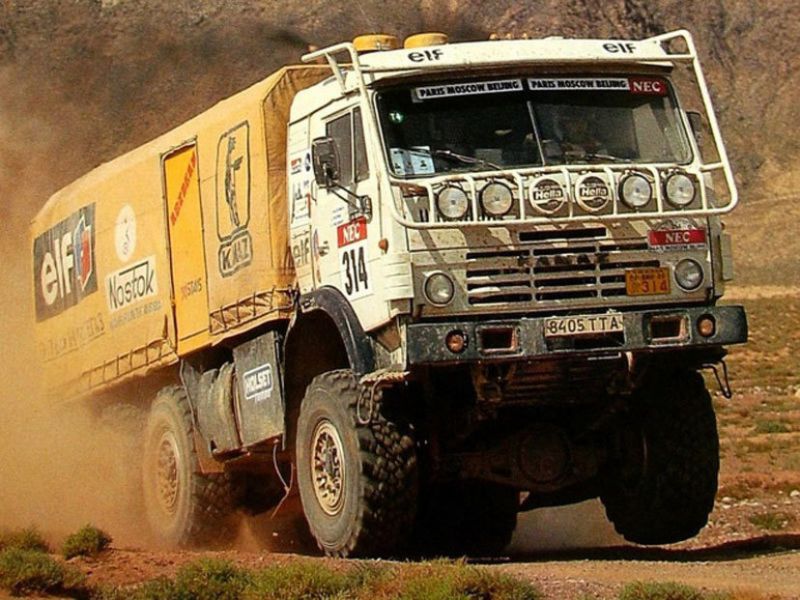 In accordance with FIA standards, the truck is equipped with safety arcs. Also, the appearance of the brand C4310 differed from the basic one by the fact that a new tent was used, which was painted yellow, while ordinary cars were walking with a green tent. September 1988 was the first month of the truck’s participation on the rally road.

The crews of the Kamaz-Master team took part in the European rally “Jelcz”, which took place in the city of Wroclaw in Poland. Machine was able to take the 2nd and 4th place in the personal offset and the 1st – in the team event. A few years later, in 1991, the sports truck took the 2nd place at the famous rally-marathon “Paris-Dakar”.

After that, the manufacturer carried out the following upgrades, so in 1991 Kamaz had a new eight-cylinder engine (KamAZ 7482), which produced 430 horsepower. Later, it was this engine that became standard for the serial Kamaz. 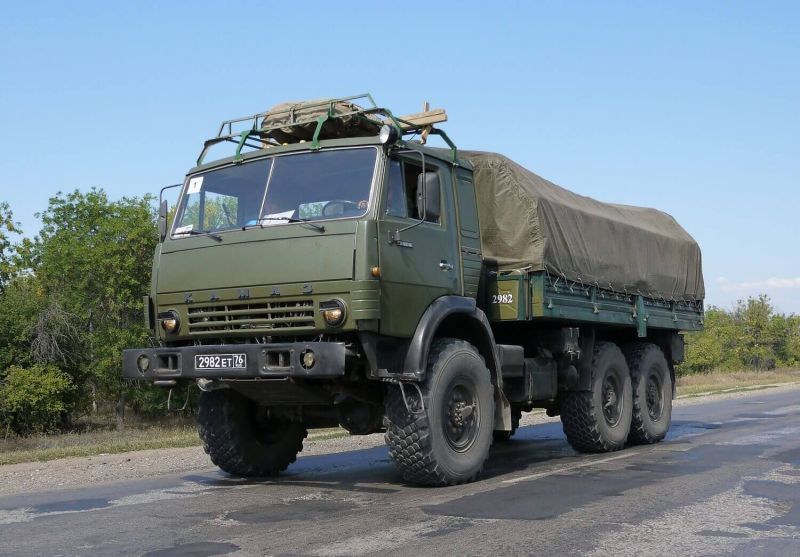 Despite the fact that many years have passed since the release of the debut model KAMAZ-4310, it can still be found. Especially in the Soviet Union, there was no better truck type. The model is still used in various industries, including military purposes. It is clear that the comfort in the cabin is still at a fairly low level, but the car was created not for driving around the city, but to overcome off-road, deep fords. Therefore, it is expected to be reliable, functional and powerful – and all this KAMAZ can give.

Some models come with remote tire pressure control, with a sleeping berth, which greatly simplifies the driver’s work. The large ground clearance, together with all-wheel drive system and strong powertrain, allows for confident driving where other trucks simply cannot drive. The C4310 will be remembered by many around the world thanks to the success of the world’s off-road races. To this day, the car serves as a faith and truth for many drivers in many countries around the world. 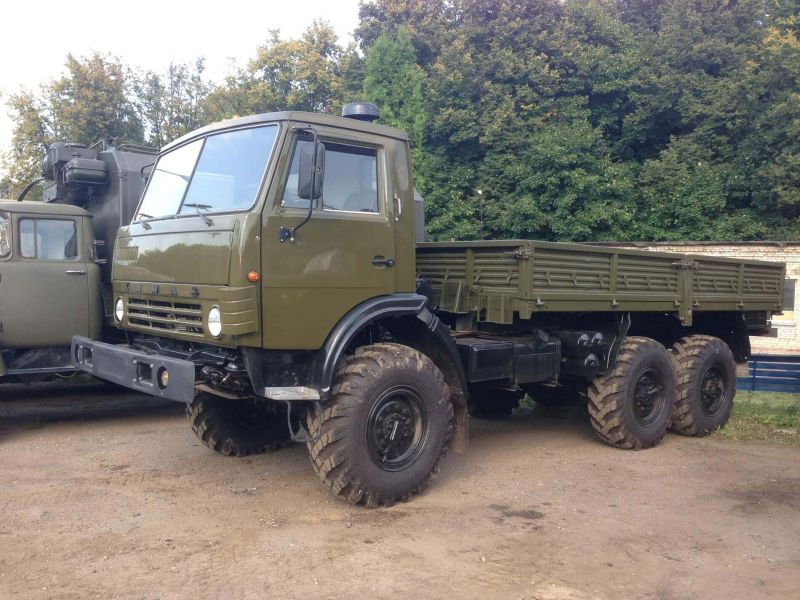 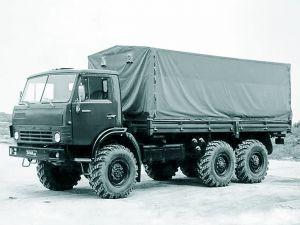 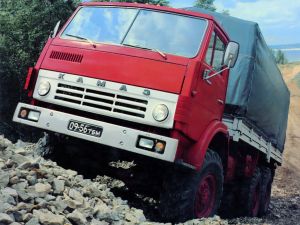 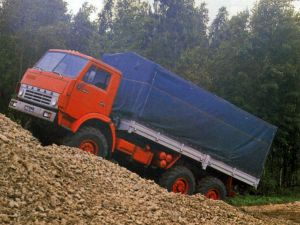 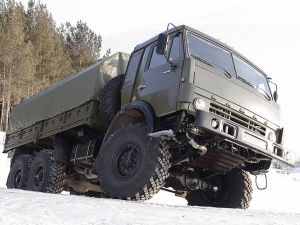 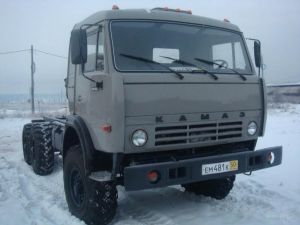 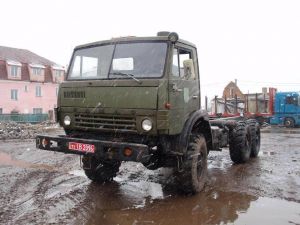 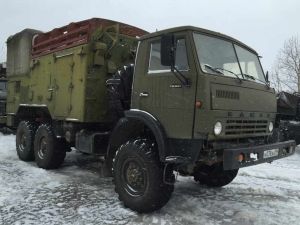 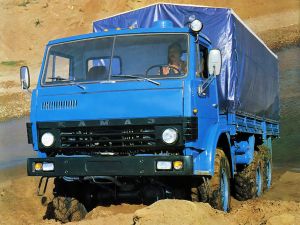 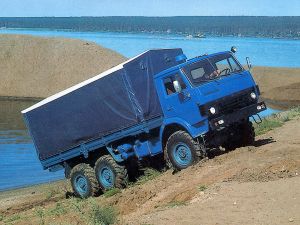