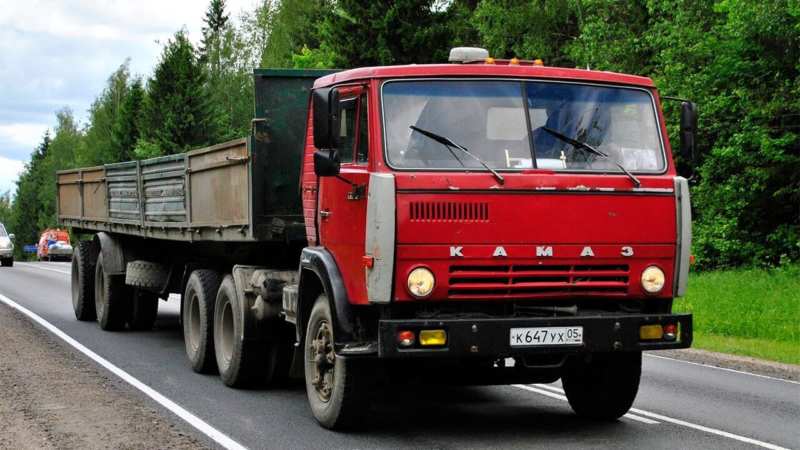 KAMAZ-5410 is a popular Soviet truck tractor. Such a machine was produced at the machine plant in Kama from 1976 to 2006. The truck tractor is already a legendary car of domestic production. Serial production of the truck continued for almost 30 years.

The Kama-based automobile company provided some designs of the car, among which was the presence of a classic one, for severe Arctic frosts and for the hot tropical climate. As a result, this made it possible to operate the machine in different regions of the Union of Soviet Socialist Republics and Russia.

The multifunctional design of the car’s mountings and saddle made it quite popular in various fields. This can include the rescue sector (to transport specialists, special mixtures and water to the emergency area), transportation (to move bulky goods, dry goods, gases and liquids) and agriculture (to transport fertilizers, land and crops). 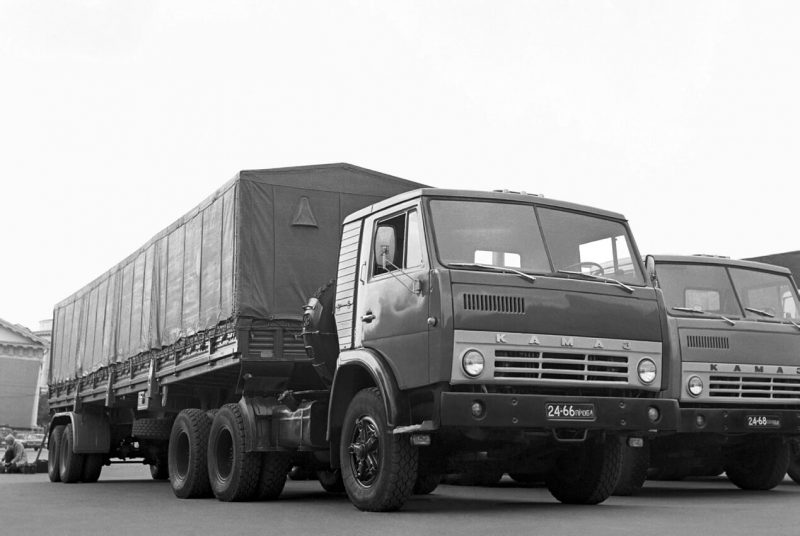 With the help of its multifunctional device, the machine has been able to earn a good reputation as one of the most efficient and unpretentious machines, which are able to function in difficult circumstances with different loads. The Model 5410 is a good choice for medium to larger companies with high transport volumes. 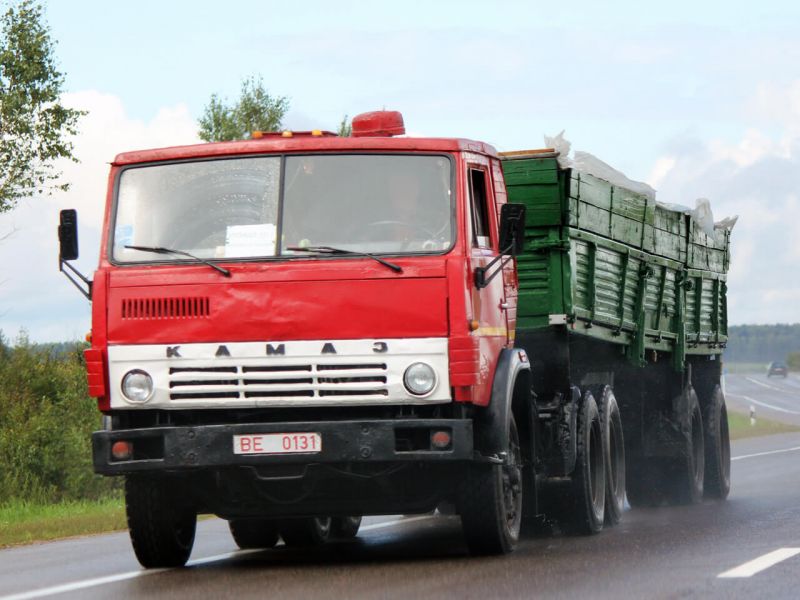 The KAMAZ 5410 itself with its semi-trailer leaves the impression of a reliable machine and a loyal partner who is able to cope with difficult tasks without much difficulty. The Russian Federation still actively uses this brand, but it is also in demand in some foreign countries.

When the twentieth century ended, the model almost fully exhausted itself, as it was replaced by more advanced vehicles of the Kama Automobile Plant. For example, a successor to the KAMAZ 65116, which already had a powerful engine and improved performance, appeared.

The exterior of our model differs in its brevity and simplicity. Since the truck tractor was created in the Soviet Union, its design was focused on the technical component, but not on the beautiful and stylish appearance, although it can not be said that the three-axle truck turned out to be terrible.

The cabin itself is cabover and has a strict rectangular shape. Ahead of the tractor was equipped with round headlights, as well as a massive radiator grille, where there is a corporate logo of the company, which produces this model. The bumper was made of metal content or plastic. 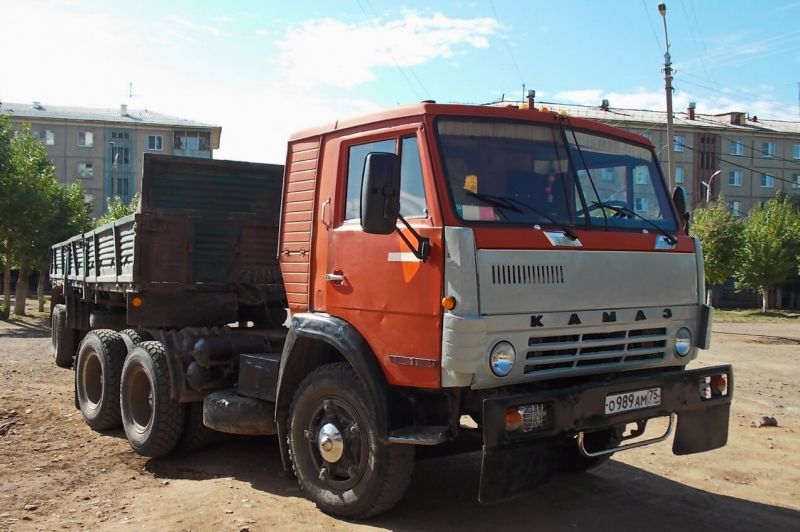 It is one of the most important parts of a passive safety system that effectively takes on the impact of an emergency. The front glass is clearly arranged vertically and is also separated by a transverse molding to increase stability. This has also helped to withstand airflow at high speeds and oncoming winds with greater confidence.

During bad weather, the machine’s glasses clean the large, long-life wipers, which are equipped with specially equipped brushes. Side visibility mirrors have received different angles of direction to reduce the degree of dead zone and make it easier to control the overall size of the truck. There is even a timber truck, which is not afraid of overloads and confidently copes with its work.

Getting to the driver’s workplace you realize that it was carried out in a restrained style with a minimum number of crownings, but with extreme practicality to better perform their own functions. The KAMAZ 5410 model is available in some versions of the cabin – by the number of seats (2 or 3 seats), as well as the installation of sleeper.

It is easy to guess that when there is a berth in the equipment, it makes it possible to operate the car more productively for long-distance multi-day trips in the Russian Federation and CIS countries. This introduction is very useful, because then it is possible for two drivers to sleep well, without causing unnecessary harm to their health. 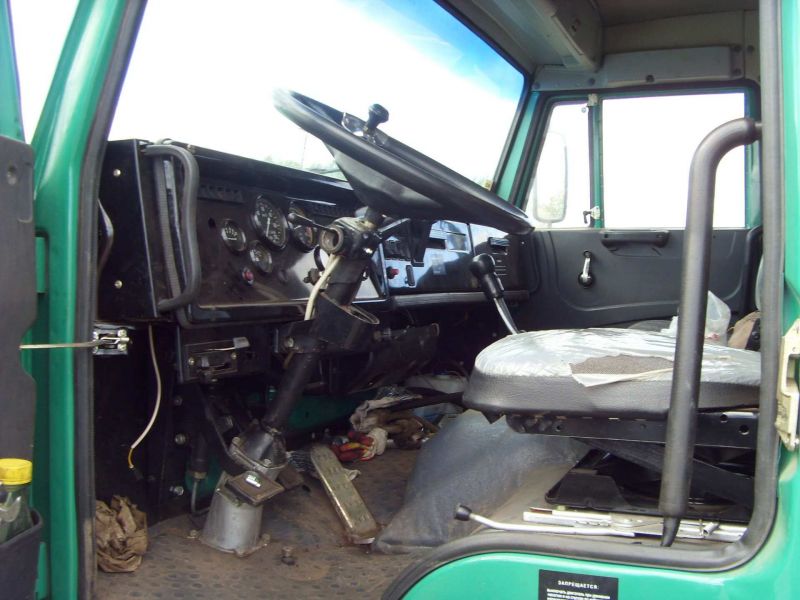 The sleeping place was placed right behind the chairs and it means a small compartment with a shelf for a couple of people. The saloon has been equipped with plug-in options that include three- or two-point seat belts, which are equipped with restraints, heated driver’s seat and fog lights mounted on the front bumper.

What was very pleasing is that the cab was cabover version, the power unit was placed under the cab, which allowed developers to use the free space in the cabin more rationally. The dashboard has all the necessary sensors and controls, which are not so far away, which allows the driver not to be distracted from the control of the car, and, at the same time, to change the parameters without leaving the driver’s seat. 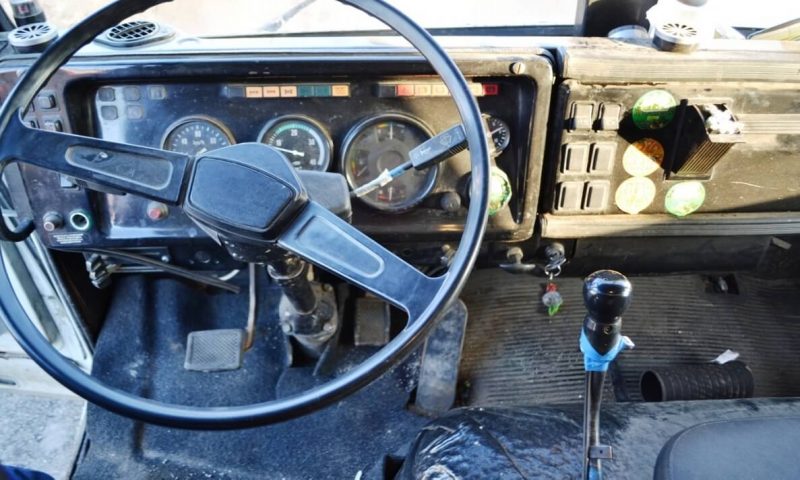 The chair itself is better adjusted for the distance from the steering wheel, and the speaker can change its height, which makes it possible to adjust an adequate angle of control for each person. Despite the different tuning, the car was deprived of shock absorbers in the body, so it was decided to install a driver’s seat on a specialized spring of pneumatic type to reduce vibration and kickback.

Thanks to it, it is possible to gently absorb all the bumps on the roadway, while reducing the shaking inside the cabin. But, as usually happens for the domestic car industry, this function is not designed for passenger seats. 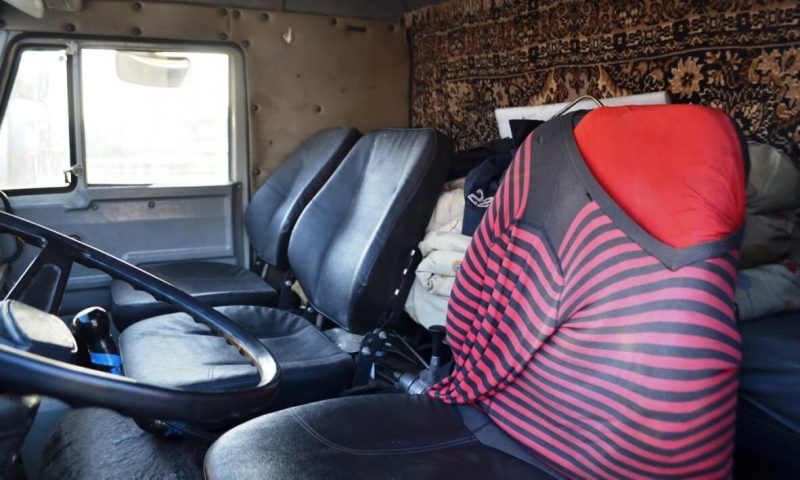 Almost everything inside the car is a clear indication that the 5410 is a working tool, which does not distract from the performance of their direct duties. But it is impossible to say that the interior has not received a competent design and convenient distribution of devices, which, albeit a little, but still increases the level of comfort.

The Kama car comes with a turbo diesel engine KAMAZ-740.11-240, which was produced by Yaroslavl engine builders. It is a V-shaped 8-cylinder 10.85-liter engine and produces 240 horsepower at 2200 revolutions of the crankshaft per minute. The diameter of the cylinders is 120 mm.

Consumption of this engine is about 33 liters per 100 kilometers in average mode. Diesel fuel for the engine is taken from the fuel tank, which capacity is 250 liters. Such an engine meets Euro-1 environmental standards.

The torque of the engine is transmitted to the wheels by a mechanical 10-speed gearbox. It is controlled by mechanical remote control. The clutch is represented by a friction dry two-disc type, where there is a hydraulic drive together with a pneumatic booster. The diameter of the linings is 350 millimeters. The large gear ratio provides a quick reaction of the technical side of the vehicle, which is very important in case of overloads and difficult situations.

Both in front of and behind the car there is a spring suspension, which allows even to use the car as a logging truck, and it is there that it is the most overloaded and rides on a bad road.

Many people started to make their own tuning of KAMAZ 5410, but initially it comes with diskless wheels of pneumatic department, designed for 20 inches. The tires come with the camera and with the help of their design features are very resistant to hernia and bumps. Also, they behave confidently during punctures and punctures, allowing you to drive quite a long distance on the flat rubber.

The wheelbase 6×4 provides good steering, stability of the truck tractor, as well as excellent traction properties. Rubber is made on high quality and is not afraid of blows and wear resistance. The truck will be able to pull out of any ditch hard load.

It has a pneumatic actuator. Brakes on all wheels are represented by the drum type, where the diameter of the drum is 400 millimeters, and the width of the brake pads 140 millimeters. Braking is not bad.

In addition to the standard equipment, the machine is available in arctic and tropical design, which are designed for operation in extreme conditions. Moreover, KAMAZ-5410 can be used in the rescue industry, for transportation of mixtures, personnel, as well as as a timber truck, dump truck. Many drivers prefer a small tuning to decorate the car. The model is perfect for any large or medium sized company fleet engaged in mass production or transport of large and heavy loads. 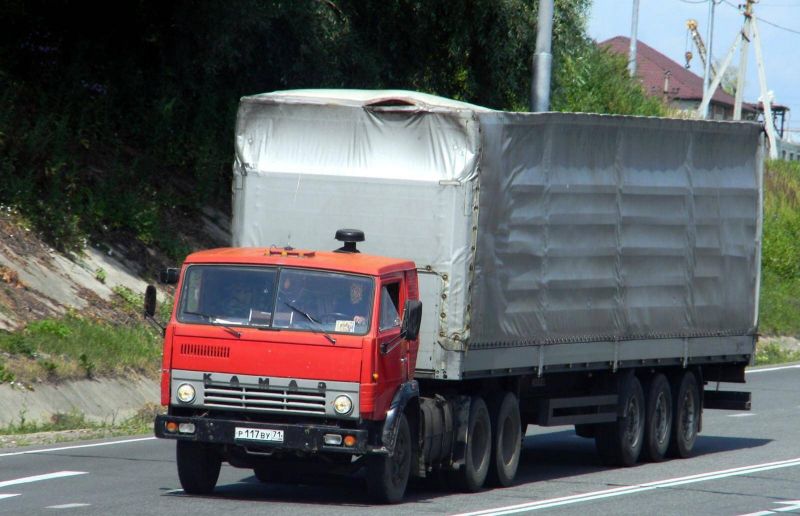 The truck tractor KAMAZ-5410 will remain not only in our memory, but also on the roads of the Russian Federation and many other countries for a long time to come. After all, this car is not whimsical, it can work in low and high temperature conditions, and is able to perform those tasks, even if they are difficult, which not all trucks can cope with. Only the car still has a high fuel consumption per 100 km. It is clear that in terms of ergonomics and interior model is outdated, but in those days the country needed a good technical truck, not a comfortable car.

Although, many people today make tuning with their own hands, and you can find a whole catalog on the Internet, how to do it. However, the fact remains that KamAZ 5410 truck tractor is an indispensable tractor of truck type, which is not so expensive in the secondary market, but can become your loyal friend in any road, without fear of dirt and impassability. 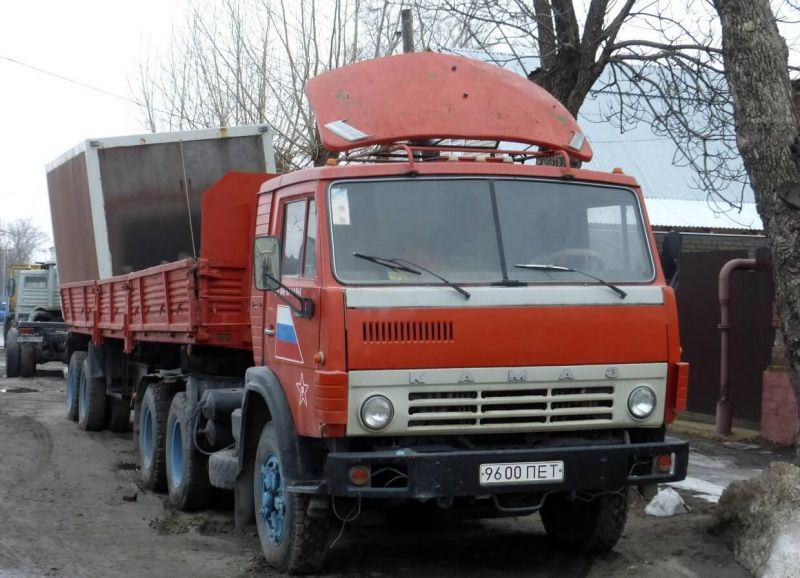 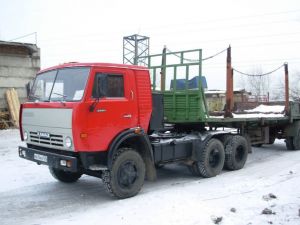 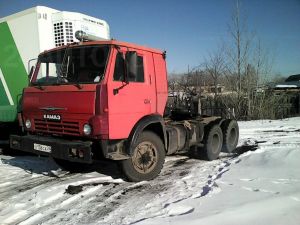 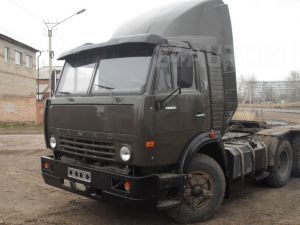 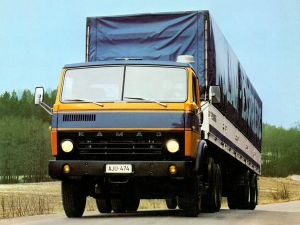 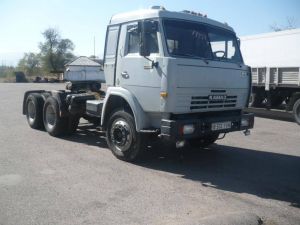 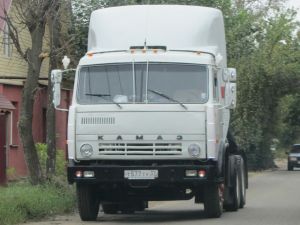 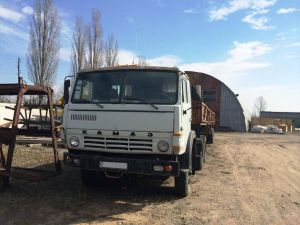 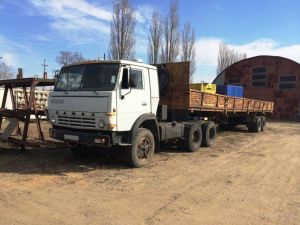 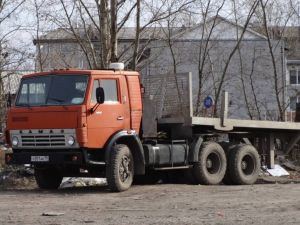