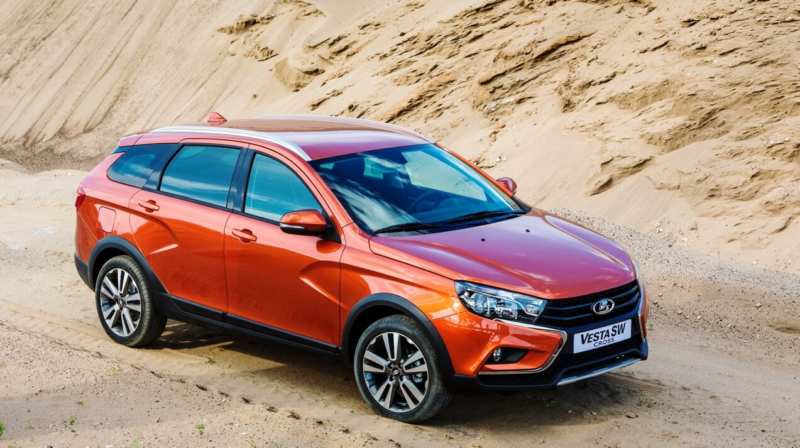 Lada Vesta Cross is an all-terrain car, a model of Lada Vesta wagon, which is a pre-production version, as demonstrated at the Moscow Off-Road Show 2015. This event was held at the end of August. Such a simple solution allowed to attract even more attention to the new car, because it really looks impressive.

After all, this modification of the Lada Vesta Cross CB universal car is not just another model of domestic production, which is a trump card in the amount of purchase, and it is a full-fledged rival to many modern foreign cars B, and sometimes even C-class. The whole model range is Lada.

To understand what it looks like, what kind of new car it is, what level of modernity, dynamism and charisma it has, photos and videos that can be found in this article will help. VAZ’s appearance has certain similarities with Lada XRay Concept 2 2016, namely X-shaped stylistics, because the headlights installed in front were divided into sections, which will give some resemblance.

If you are careful, you can see the fogging compartments at the bottom of the rear of the bumper mounted in front. If you compare the car with Lada Vesta sedan, the bottom is protected by powerful plastic pads, which turned out to be unpainted. It is characteristic of scratching, such a dodger was very useful, could complement the front and rear bumper, thresholds, door areas at the bottom, as well as wheel arches. 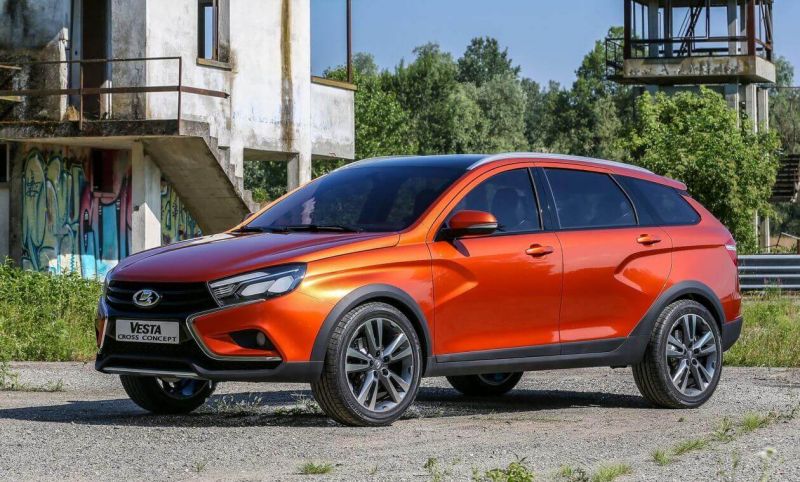 The raised radiator grille has compartments, which are represented by a pair of chrome bars. The manufacturer’s nameplate is also a massive size. The side part of the new car has interesting indentations, which are similar to those on the front of the bumper, but a little more massive.

Wheel arches are equipped with 18-inch wheel rims. The height of the road clearance has been increased, without which it is necessary not only to do with the movement of the rough terrain, but also with the “quality” roads of the Russian Federation. The conceptual version has a ground clearance of about 300 mm, one serial model will certainly have a more modest height, which will make it possible to increase the aerodynamic performance and stability of the machine in corners. 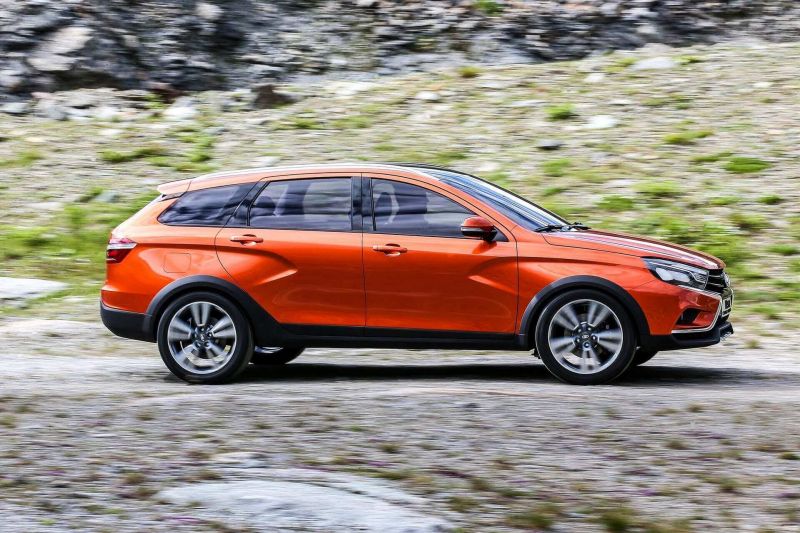 The aft part has a luggage door, the size of which is not big size, and the luggage compartment itself turned out to be spacious. Despite the similarity with the Sedan’s version, according to the manufacturers’ assurances, the similarity in appearance of the cross-version with the standard one ends behind the central rack of the car – then there is a fundamentally new, stylish, sloping roof, flowing into the “athletic” stern.

It is equipped with modern rear optic lanterns along with original rear columns, which give the car dynamism. If to speak in general, the appearance of the universal, provided that the company can save its style, almost loses nothing to its classmates, which environments are Skoda Octavia Scout, Volkswagen Golf Altrak and even somewhere Subaru Forester.

Very interesting is the black inlay under the rear spoiler. With the help of this element, it feels as if the roof is not attached to the main body at the back. In general, the design has been introduced about 300 – from the changes that begin from the middle rack and go to the luggage compartment.

Judging by the statements of the company’s representatives, when they were creating a new car interior, they used only high quality materials. It will not be superfluous to say that the interior is exactly identical to the standard version. The panel installed in the front was made in a very interesting style, in the form of 3 wells. It is complemented by various interesting elements and discreet blue illumination.

The seats installed in front of the vehicle are more comfortable. According to the manufacturers, thanks to them, the driver will be able to feel very comfortable, despite the long journeys. They were made of high-quality filler and have full side support. 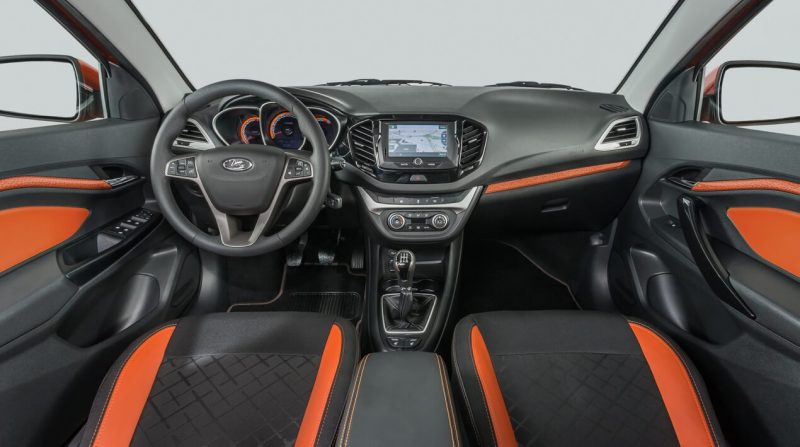 The driver’s seat has a height adjustment option in addition to the main settings. The centrally mounted console has been able to attract the eye. It looks bright, colorful and quite functional. Thanks to the driver’s convenient location, it is easy to operate even when driving. With the help of a certain angle, the appearance of the panel has become more ergonomic.

Even the basic equipment in the domestic novelty, has a system of climate control, as well as there is an information-media complex with a display that supports touch screen input. Due to the fact that the new car will be in an elongated body, we can assume that for people sitting behind, the free space in the legs will be even more. 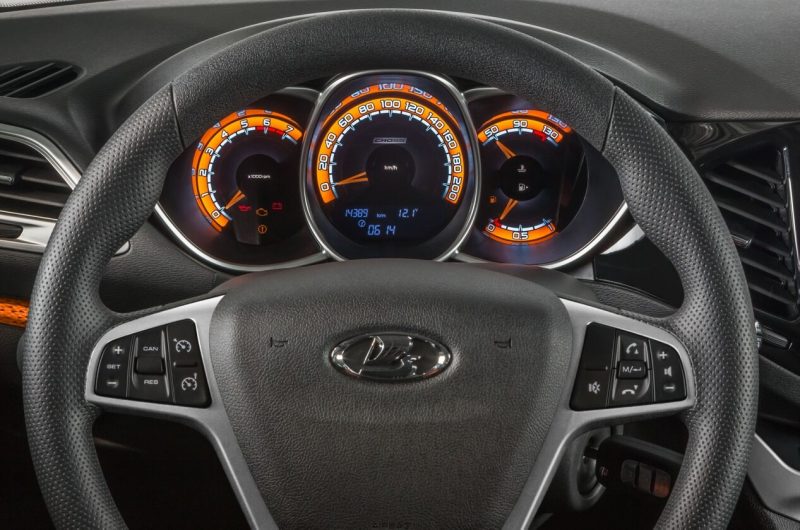 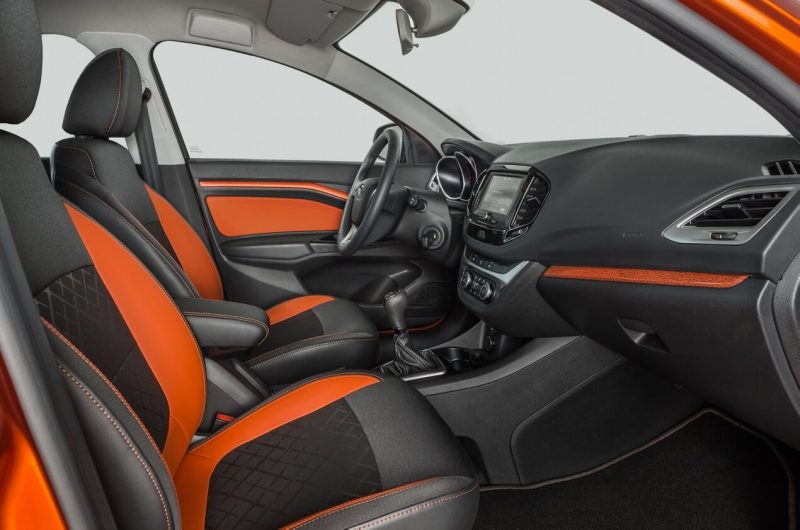 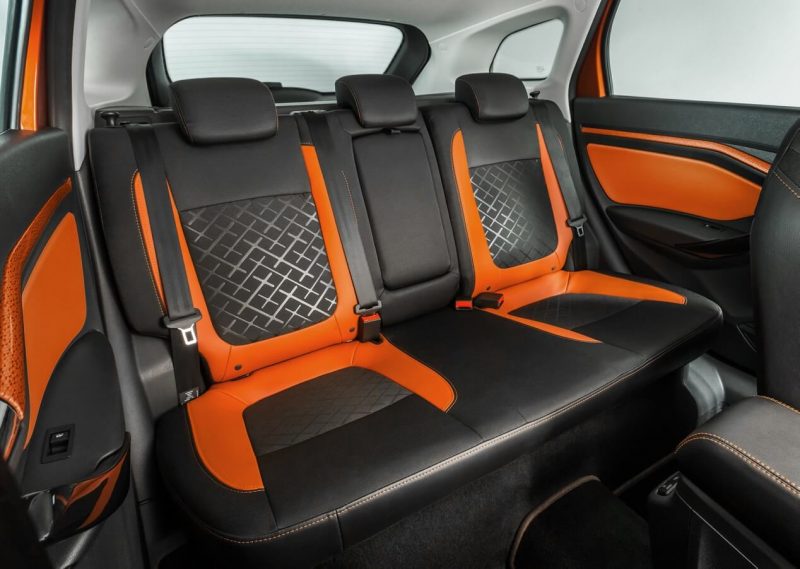 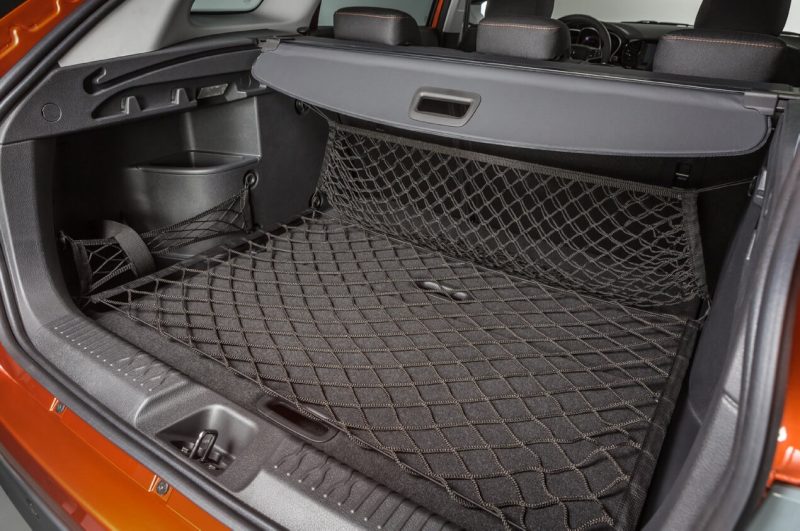 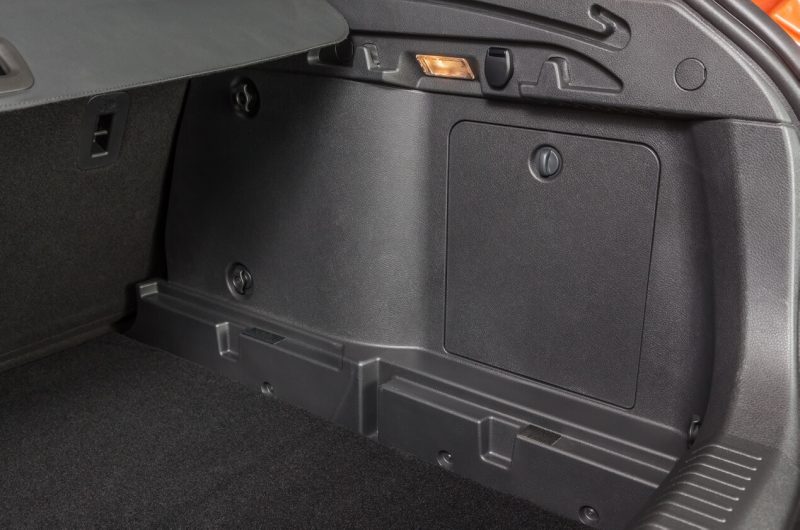 So far, officials do not talk about the declared dimensions of the machine because the work has not yet ended and the serial model may differ slightly from the conceptual version. The color of plastic inserts on the door upholstery can be matched to the main color of the universal, which not only complements the interior of the car, but also connects it with the appearance.

Many motorists will like the updated steering wheel of Lada Vesta Cross SV, which now has leather upholstery and became more comfortable to lie in the hands due to the increased thickness. The steering wheel of the car provides an abundance of functional keys, among which is the start of the option of heating the steering wheel. The upholstery of seats has the addition of fabric inserts in tone to the basic color of the car.

Under the headrests there are metal nameplates with the name “LADA”. Thanks to this, the interior of the machine is not only stylish, but also prevents abrasion of this very contact part of the chair. It is not superfluous to notice that the screen, which supports the touch control of the infotainment system, is provided even in the standard version. 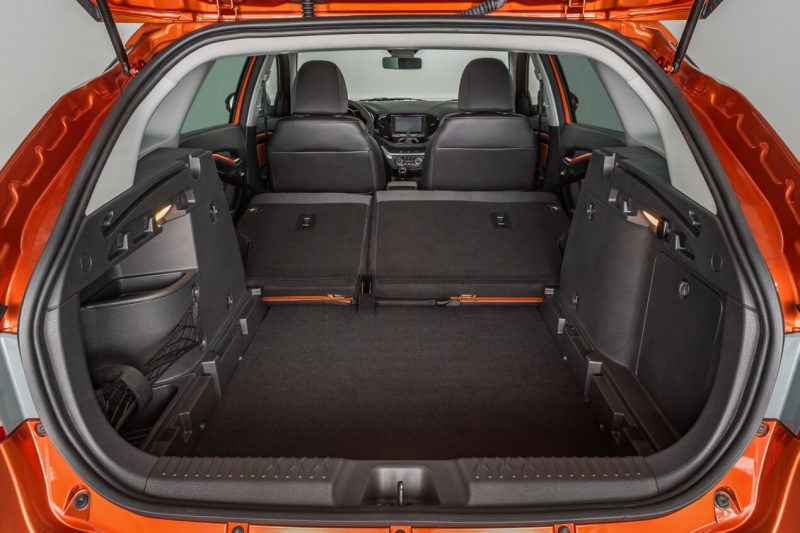 Such solutions can be found very rarely even in automotive manufacturers around the world. It is expected that the trunk will be able to get as much as 500 liters of useful space, which, if necessary, can be increased by adding backrests of rear seats. At the moment, it is not yet clear whether the serial model will have a clandestine luggage compartment, curtain and special rails for more comfortable fixing of the trunk, as the concept car was famous.

It is expected that for the domestic universal, there will be power units operating on gasoline. It is a 1.6-liter 106-horsepower engine produced by Nissan HR16, which develops the same 1.6-liter engine, but already has 114 horsepower and a volume of 1.8 liters, which has 126 horses, and a domestic engine.

In addition to the 5-speed manual gearbox, there will be a 5-range gearbox and a “robot”. The speed limit of the Lada Vesta Cross will be 185 km/h, and the first hundred will be reached in 10.5 seconds. The car will consume about 7 liters per 100 km. All power units together with ecological and technical characteristics of the engines meet the European standards of Euro-5.

If we speak for the transmission, as standard, the universal will go with a front drive, but it is impossible to exclude the installation of 4×4 four-wheel drive system. The car itself was designed on the platform of the already popular 3-axle volume, so it is logical to conclude that it will be fully copied.

The universal has independent stands McPherson in front and semi-independent architecture with a torsion beam at the back. The steering is carried out with the help of electric power steering. Brake system is represented by ventilated front disc brakes.

If Lada Vesta Cross SV will be able to get to serial production, it will not happen before September 2016. At first, the automobile company will put into mass production a standard multipurpose truck. Proceeding from this, today there are no price tags for this car, but we can assume that the crossover version will cost $2352 more, the sedan version.

Such a decision is explained by the experts by the fact that a considerable amount of investment was made in the development of the machine, which is equal to about a million euros. Possible equipment variations are also unknown. To confess, even the appearance of the interior with the salon during the production on the conveyor may slightly change. 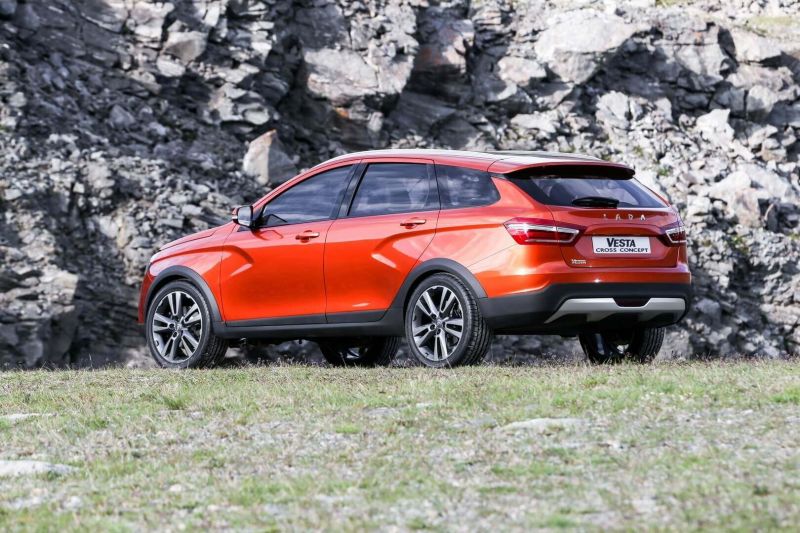 It is worth waiting for the installation of full climate control. There will also be cruise control, rear view camera, multifunctional steering wheel, built-in navigation system, rain and light sensors and windshield heating. Only foreign cars have such equipment, which made them very happy.

Universal Lada Vesta Cross is planned to be produced in 3 configurations: Classic, Comfort and Luxe. Era-Glonass transmitters will be installed on all three sets of equipment, which will enable them to transmit the emergency signal to the traffic police. Thanks to GPS modules, it will be possible to track the location of the car when it is stolen.

Top-of-the-range equipment will go along with airbags, where they will be 4 – front and side. There will also be EBD, TCS, BAS systems, a system that helps you to start driving uphill. They have not forgotten to install the standard security system, immobilizer, on-board computer and automatic door lock.

Summing up the results of the novelty of domestic production, Lada Vesta Cross SV, I would like to say that the car has been much transformed. It is noticeable even in appearance, which has become more modern, sporty, energetic and at the same time stylish. The front part received excellent equipment, there is a large logo of the manufacturer and stylish headlights.

Large wheels with no less massive wheel arches are installed on the sides. The rear part is almost unrecognizable if you remove the “LADA” logo. The interior, following the exterior, has improved in all respects. There is a good and comfortable dashboard, touch screen, comfortable functional steering wheel, stylish central console. 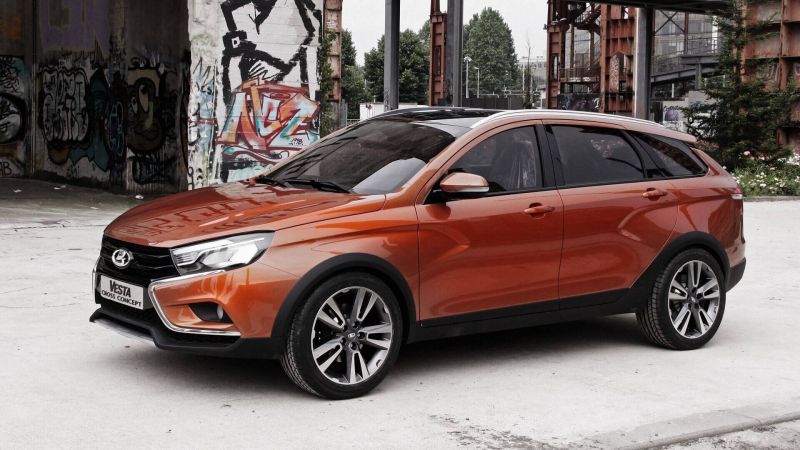 The quality of the interior decoration materials has improved. The front seats are quite comfortable and have good side support. There is enough space inside the car. The luggage compartment has a solid reserve of volume, which can be increased, if necessary, while adding backrests of the rear seats.

Powertrains are not the most powerful, but they do their job well. The good safety system and the various assistants, who are designed to help the driver on the road, are pleased. There is a system that will help you steal a car by showing you where your car is through a satellite sensor.

There is also an Era-GLONASS system that will give you a signal if your crossover is involved in an accident. Let’s see, what car will be in serial execution, but it is visible that company LADA, is adjusted resolutely to win hearts of drivers. Judging by the concept car version, they have all the chances. 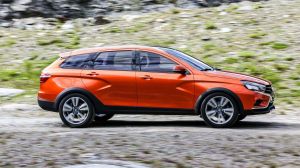 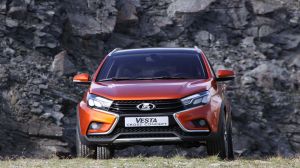 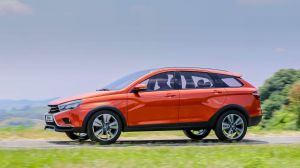 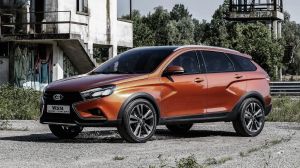 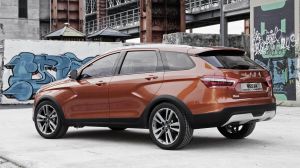 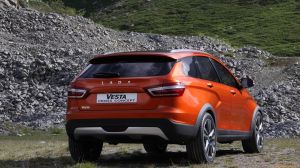 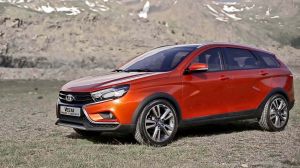 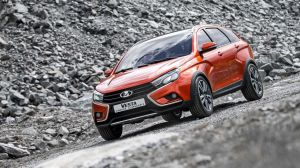 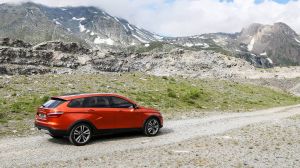