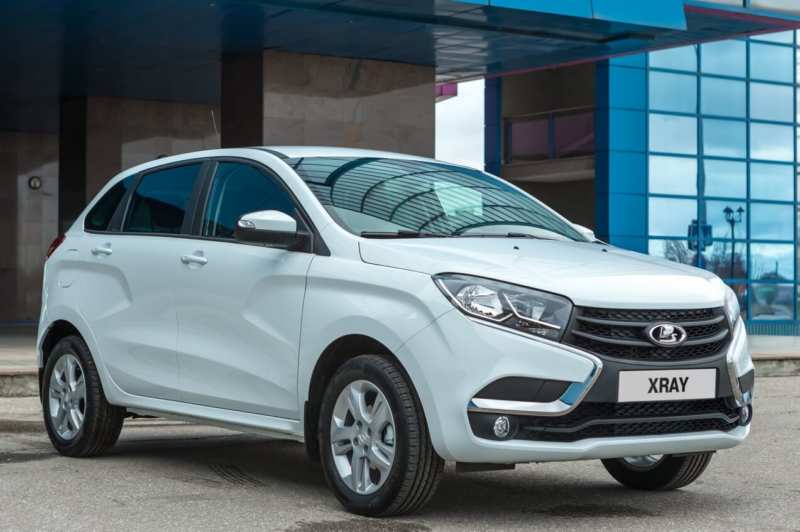 Crossovers – very popular, multifunctional and practical type of car today. High-quality crossover from a well-known manufacturer is highly valued and is in demand. Cars of Lada brand are gradually gaining popularity, are becoming more and more high-quality and each time more and more forced to respect themselves.

And for many people it was a pleasant surprise that a new crossover from the manufacturer Lada Corporation, which has already been loved by millions of people, is being released. The new car is called XRay. It was already possible to admire them at the recent July exhibition of cars in Moscow, where, by the way, another beautiful model from the same brand – Lada Vesta was presented. The whole model range is Lada.

As for the Lada XRay, this model is very similar to its predecessor, which is also very well made. As for the serial production of the described model, it is planned to start in mid-December. So, this crossover is based on the platform B0, and technically the model helped “Renault” with its five-door cars. However, in terms of design, the new Lada did not need any help at all.

When creating the new Russian crossover Lada XRay, the design staff was tasked to provide consumers with an idea of the latest design of Lada cars and show further development of the appearance of all cars of the AvtoVAZ group in the near future. As the world practice and the carried out researches in the marketing section show, the actual appearance of the Russian crossover has memorable features and a reliable dynamic profile, which allows you to instill confidence in the car.

The contours of the radiator grille with the lamps installed at an incline form the Latin letter “X”, which serves as a basis for new images of Lada cars. The grille is made of black and polished plastic. The letter “X” differs by inserts from the polished aluminium which on a kind does wider forward part of the car that speaks about resoluteness of a crossover. 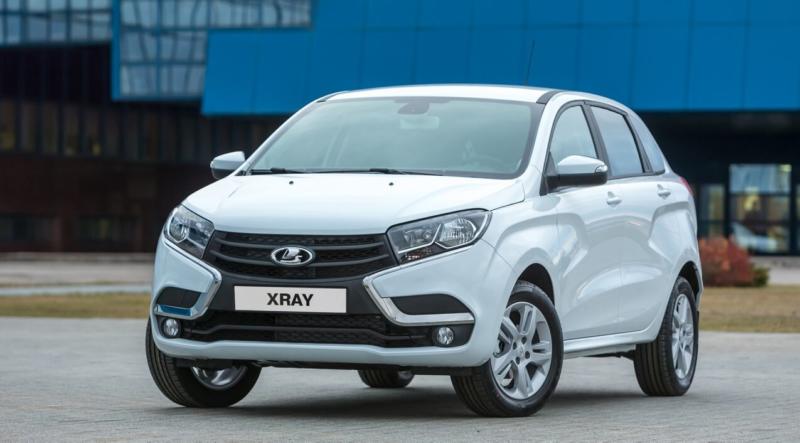 Speaking of stern, I would like to say that it has a very harmonious balance of precisely calibrated and overnight living and natural surfaces. Especially attractive is the look of the wheel arches, which were made of combinations of convex surfaces with a cutting line. It is not for nothing that the designers compare it with the starting athlete, who is tense and attentive in anticipation of the start signal, in order to demonstrate his dynamism and self-confidence.

What’s more, the crossover looks like the Lada Xray Concept 2. The difference is that the serial model looks less presentable than the concept version. However, similar elements in appearance have been preserved and it is very important. 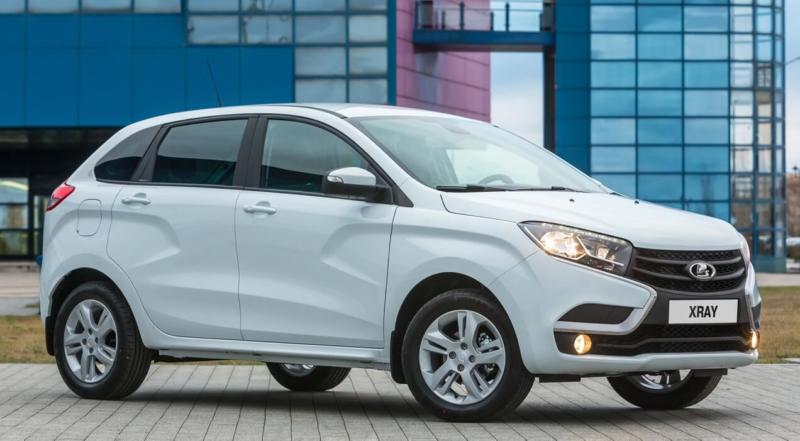 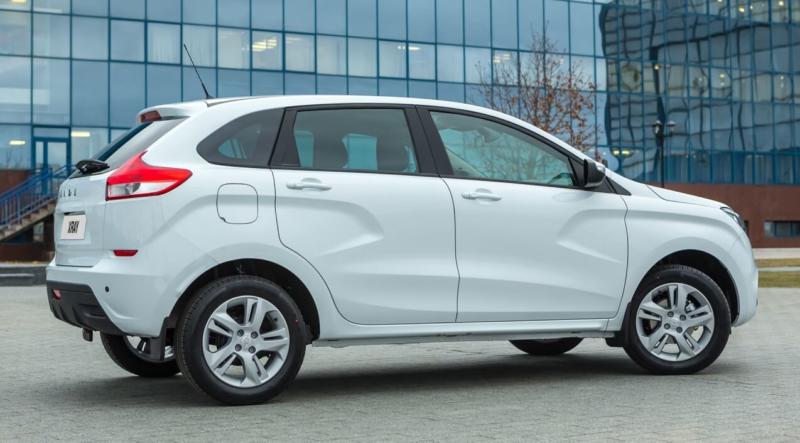 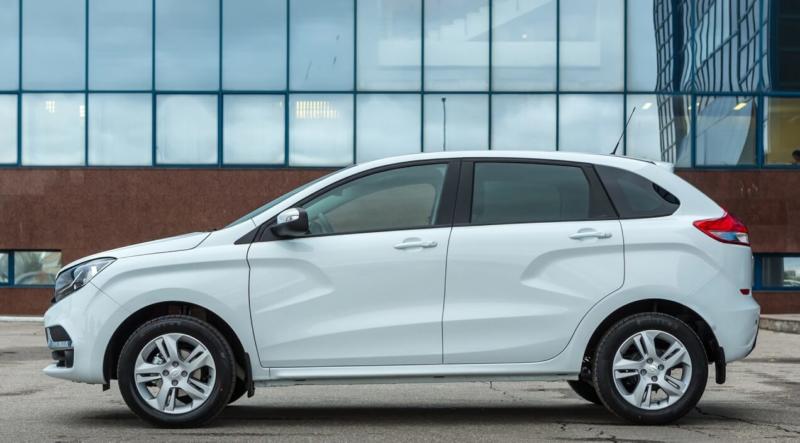 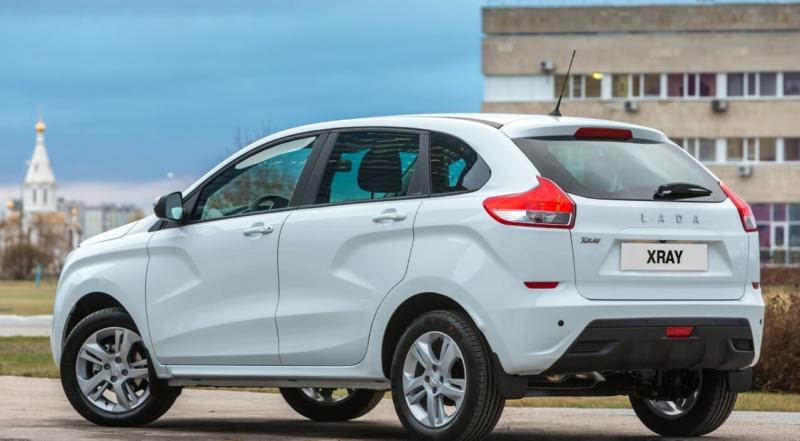 What are the stylishly executed head optics with use of light-emitting diodes, which on forms resembles the wrong 4-eh corner.  The additional lighting hints at the shape of the boomerang. Side by side there are punches, made in the form of the letter “X”. Side mirrors of the rear view received repeaters of turns from the LEDs. The windshield has the maximum inclination.

The new design concept of Lada XRay touched not only the appearance, but also the interior of the new product. Getting behind the wheel of a crossover, you understand the nature of the car. The main attribute on the dashboard is a speedometer. Moreover, it blends harmoniously with the body of glossy dark plastic. The Russian car can accommodate four people with comfort.

With the help of thought-out mechanisms that help when folding the front seats, it will not be difficult for passengers to sit in the back of the car. Thanks to the unusual colors of the interior, an atmosphere of comfort is created, which at the same time inspires confidence in the car. The seats are also distinguished, which are painted with shades of bronze and brown with orange stitching. 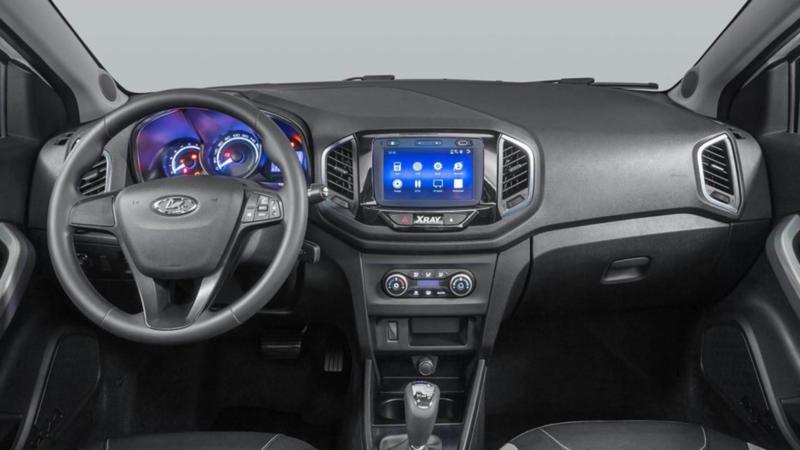 Doorways have a wide space and allow you to take a closer look at the interior of a four-seater crossover. All seats have clear borders and are made of leather. The front panel is decorated with stylish layers, LEDs on the doors, which first appeared on Lada XRay. The instrument panel is made in electronic equipment and has a color 7-inch screen, which is surrounded by unique deflectors of the ventilation system and which supports the touch input.

Interestingly, it is able to hide in the depths of the torpedo. MMI system contains 2 in 1 – is an information and entertainment portal, which includes: music and navigation system, organizer. Moreover, there is support for organizer, telephony, information block of machine options and a large handle with climate control. Still, in the new Russian crossover surprises carefully thought out ergonomics and quality of details of an interior what possesses adult, noble and at the same time modern shape.

Beautiful seats with undeveloped side support have been installed in front, but with a wide range of settings. The luggage compartment has 376 litres of free space, which can be increased if you fold the rear sofa up to 1382 litres. At the bottom is a full-size spare wheel, 15 inches in diameter. It is noteworthy that the car itself is equipped with 16-inch rims.

Lada XRay power units for Russian cars will be able to please with their capacities. Taking into account the size and light weight of the crossover, 122 horsepower will be enough. Everyone will be atmospheric and equipped with 16 valves of DOHC mechanism. And on this, their similar qualities end, in all other things it is absolutely different engines. All engines meet Euro-5 environmental standards.

The basic plan of the Lada XRay engine will have a working volume of 1.6 liters and will be able to produce 106 horsepower. This unit is well known for Russian drivers. The engine has an injector and distributed fuel injection with electric control. If it happens that the timing belt breaks, the valve will also bend, so it should be carefully monitored. 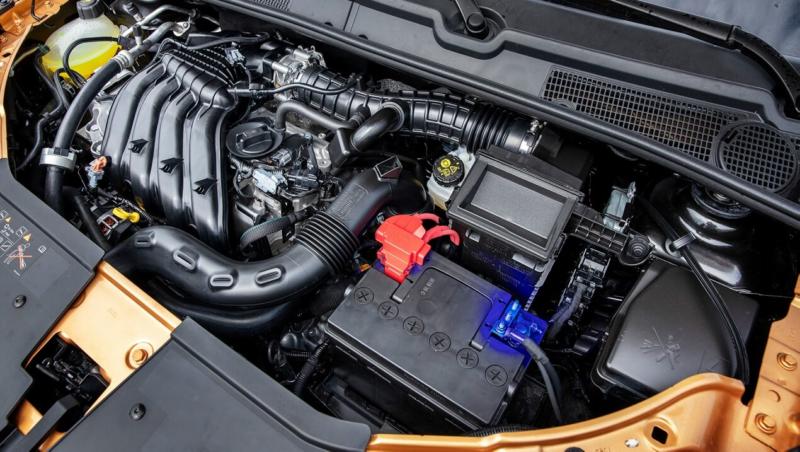 Cylinder block was made of cast iron, which allows us to draw a conclusion about the good repair qualities of the engine. There are also no hydraulic compensators. Adjustment is made by a method of selection of special “nickels”, which are on a conventional engine of the eight. Among the features of the engine, which is called the basic one, it is necessary to highlight a unique intake system. When the engine runs at low revolutions, the air begins to flow through the longer channels of the intake system.

As soon as the engine speed increases, the air flows through the shorter inlet channels. In other words, the composition of the combustible mixture begins to change – from enriched to depleted and vice versa. This makes it possible to increase the power output almost over the entire range of the powertrain.

Without this function, the motor produced only 98 horses. Synchronization of such a power unit will be only with a five-speed manual transmission from the Renault Company, but which was assembled at the AvtoVAZ plant.

The next crossover engine comes with an identical volume (1.6 litres), but its power has been increased to 114 horsepower. This power unit was engaged in concern Renault-Nissan. The engine, which is installed on the Nissan trucks, is called HR16DE, and the French engine – H4M. The engine was produced in 2006 and since then it has been installed on all cars of mass character all over the world. Its production features were mastered at the AvtoVAZ plant. The design of the device is very different from VAZ’s engines.

The 114-horsepower engine was based on the engine block and the head of the block made of aluminum, but the pallet was made of steel. Instead of the timing belt, a chain was installed. And although the four-cylinder rower does not have hydraulic compensators, it has an option to change the phases of gas distribution. From the differences of the motor it would be desirable to allocate presence of 2 injectors on the cylinder. It will work in pair only with 5-speed manual gearbox from Renault. Dynamic performance is quite good.

Finally, the latest, third and strongest engine for the Lada XRay crossover will be from AvtoVAZ. It has a working volume of 1.8 liters and is capable of producing 122 horsepower. Only such a power unit will be synchronized with the robotic automatic transmission, other variations are provided. A subsidiary of AvtoVAZ, Super-Auto, has been working on the engine for a long time.

The way of designing this power unit from the very beginning was to bore the block of cylinders under the larger diameter piston. In other words, a standard hexadecimal valve was taken, the volume of 1.6 liters and its block was bordered. The basic 1.6-liter unit had a cylinder diameter of 82 mm, and after boring – 82.5 mm. Recently, however, this method of improvement has been abandoned, because the engine life was not rich, and the consumption was considerable.

It was then decided to achieve a volume of 1.8 litres by increasing the stroke of the piston. It turns out that the block remained the same, and the connecting rods and crankshaft were foreign production and it is clear that other sizes. The pistons are also produced abroad, which received graphite spraying. They are handled by the Federal-Mogul company.

The foreign design, which proved to be reliable, made it possible to reduce the weight of the engine elements, which had an impact on the engine operation, the volume of 1.8 liters. Wild oil giraffe was avoided, and the engine resources were the same as those of a standard 1.6-litre machine. In short, it turned out to be a good engine with increased power and, most importantly, with good torque.

Before it is decorated in X-shaped style. The sides are zigzagged, which does not differ from other models of “Lada”. The described model has a length of 4165 millimeters. Wheelbase is 2593 millimeters, width – 1765 millimeters, height – 1572 millimeters. Anyone who is familiar with the original car, will immediately notice that this car is in many ways superior to it.

The management of the car company stated that the safety level of Euro NCAP tests should be the same as that of Renault Duster, i.e. 3 stars. This level was demonstrated by the Renault Sandero Stepway. This is a good result for a car of this price category, because Euro NCAP standards are recognized as the strictest.

As it was mentioned earlier, the Russian novelty has purchased a pair of airbags for the chauffeur and passenger sitting next to him, ABS, ESC, emergency braking booster (BAS), TCS (traction control function), EBD (brake force distribution), NNS and ERA-GLONASS.

It was later reported that Lada would be carrying additional AirBags. There are pillows even in the basic version, and in a more expensive, additional – side. In addition, the seat belts are equipped with a three-point inertial mechanism with a pretensioner and a load limiter. There are also mountings for Isofix child seats.

Serial production of Lada XRay began on December 15, 2015, and the cars will appear in dealerships no sooner than February 2016. It should be expected that the standard price of the novelty of the Russian car industry will be about $7842. More precise price will be known later.

In the basic mode, Lada XRay will be offered with a pair of airbags, ESP system, ABS system, radio, installed from the factory, which will go 6 speakers, “ERA-GLONASS”, for warning in emergency situations, 16-inch disks and a central lock. The designers assured the future customers that the standard modification will have a rich tooling:

For a separate price you can buy yourself: 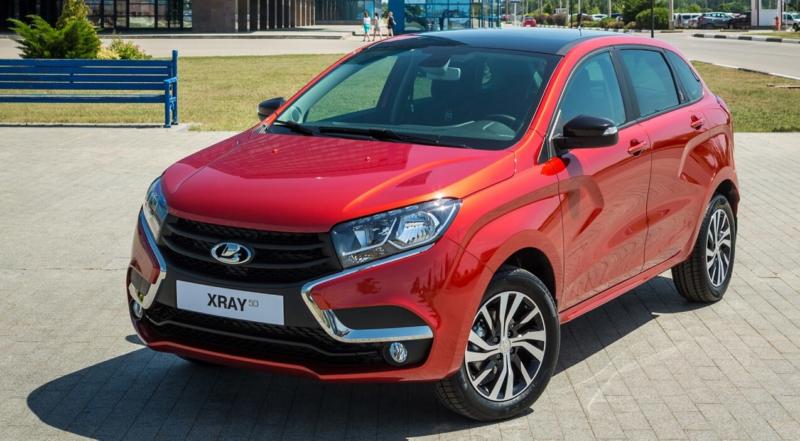 You will be pleased to find the box under the front passenger’s seat and if necessary, it can be pulled out. A similar one can be found in the underground space of the trunk. In addition, the glovebox has a ventilation/cooling function. 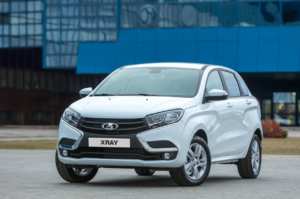 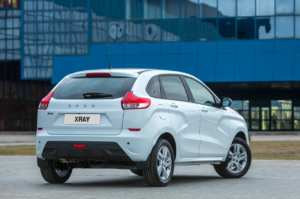 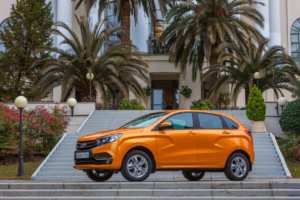 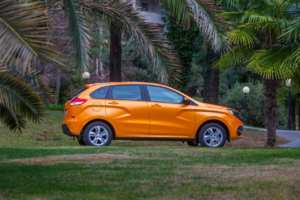 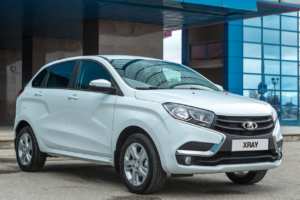 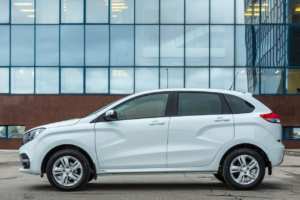 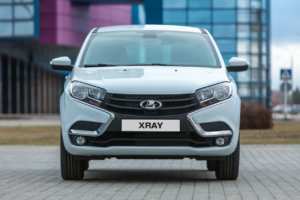 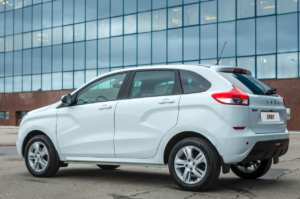 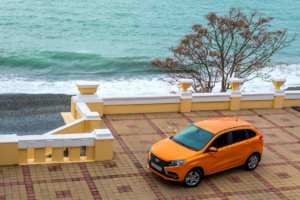