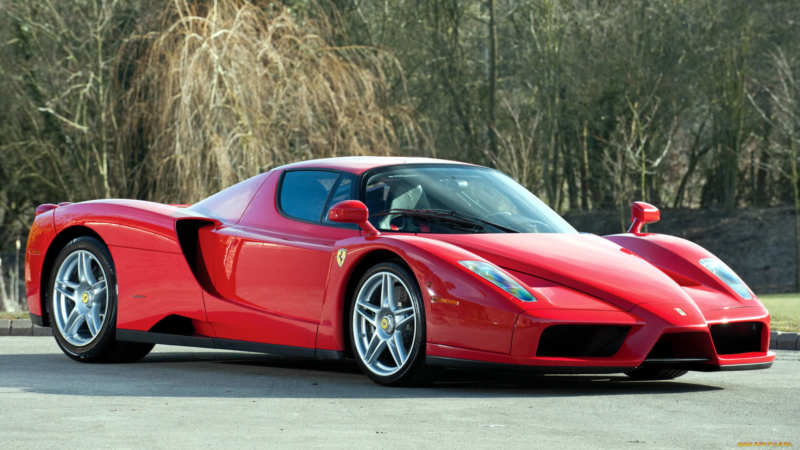 Ferrari Enzo is a two-seat supercar that was produced by the Italian car company Ferrari from 2002 to 2004. This car was built in honor of the founder of the legendary Ferrari company – Enzo Anselmo Giuseppe Maria Ferrari. This unusual model made its debut during the Paris Auto Salon in 2002. In total, the Italians have produced 400 copies of Ferrari Enzo. The whole model range is Ferrari.

While the circulation was small, this car was not sold to everyone. There was a serious selection, and it was even among the presidents who wanted to buy this vehicle. The drummer of Pink Floyd, who paid £500,000, had a similar car.
If we talk about the appearance of the Ferrari Enzo, the engineers during the creation were guided by the F1 racing cars’ style. If you look at the Italian supercar and the F1, you can notice a certain similarity in the exterior. The exterior has a large number of air intakes, allowing the power unit to avoid overheating. Also, they improve the aerodynamic characteristics of the Italian supercar. 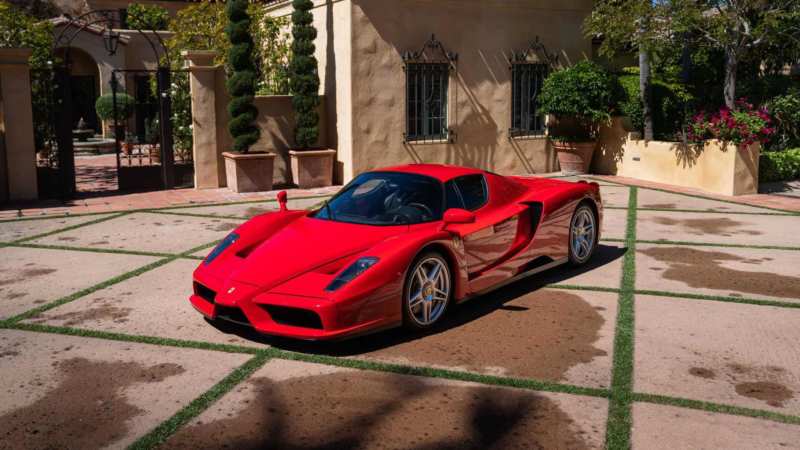 As for the doors of the Ferrari Enzo Automobile, they rise at an angle of
45 degrees. Such entries are called “butterfly wings.” Traditionally the body for the unique supercar was created in the atelier Pininfarina. However, many will be surprised that they decided not to choose an Italian for a designer, but Japanese! This may be why the car body has a drag coefficient of 0.36, which is not a record.

But many people will like the appearance of the Ferrari Enzo, as it is a lovely car, the front part of which has beautiful outlines. There is also a hood with massive bumpers coming from the bumper and continuing on the bumper, which emphasizes air intakes. This hood not only has a positive effect on aerodynamic performance but also serves an aesthetic purpose. 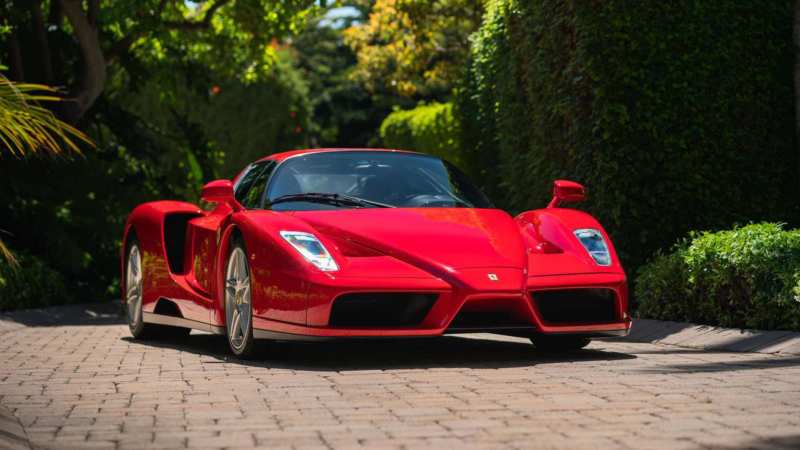 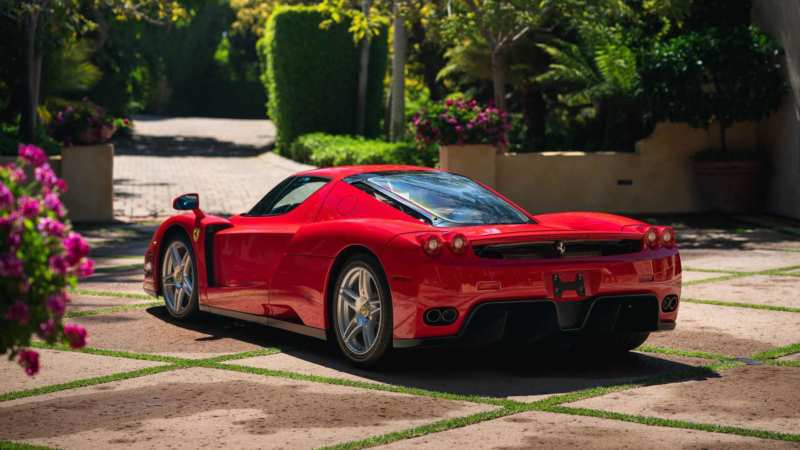 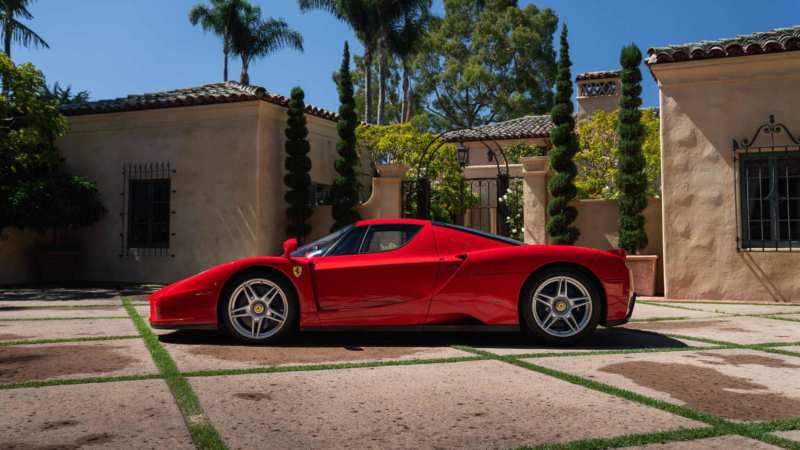 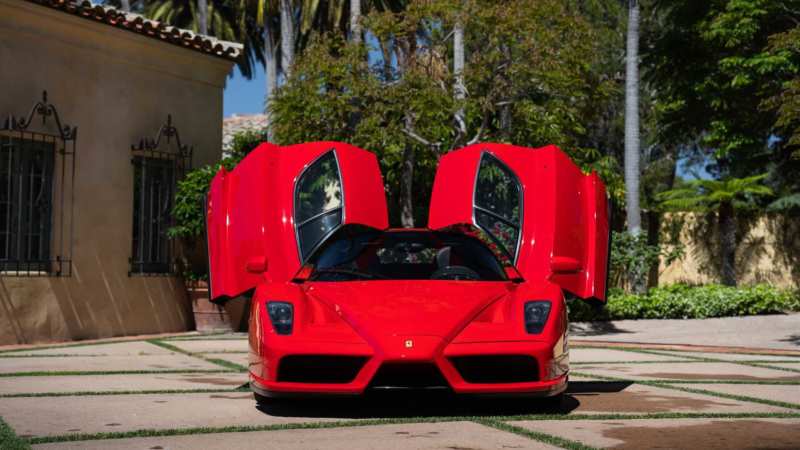 The optics have a slightly non-standard shape, but it looks and shines great. It is nice that the headlights are equipped with washers, beautifully hidden and noticeable only at close range. The side part completely corresponds to criteria of a hyper-sports car. Similar thoughts appear when looking at the driver’s cabin. One should only pay attention to the photo of Ferrari Enzo and everything becomes clear. Also you can notice

The round gas tank lid was painted in body color and placed behind the driver’s door.

Interestingly, the exterior mirrors are placed on a leg and put a little further away than the standard place in most cars, on the fenders. Enzo body is almost entirely made of carbon fiber, but the new supercar is heavier than the F40 released in 1987. The ground clearance height of the Ferrari Enzo is 100 millimeters. The rare model is based on 19-inch stylish wheels.

The stern of the supercar merely looks chic. Looking at the rear, it is clear that the car has a large size if you take the vehicle’s width. The engine here is placed in the end. It is visible through the cover, equipped with glass. The very edge of the body boasts a small spoiler, which is designed to improve aerodynamic performance.

As for the rear optics of the Ferrari Enzo, it has the signature Ferrari style. It boasts around headlights that blend in well with the exterior of the car. Not without a huge, massive bumper that has a black diffuser.
There are holes in the bumper, from which four fixtures of the exhaust system come out.

Inside the car will not be something refined or expensive, but the Ferrari Enzo interior is not inferior to its competitors in terms of functionality. In front of the driver, the Italians decided to install a 3-spoke multifunction steering wheel with various buttons, allowing them to control almost all the functions inside. Not without paddles. The supercar has a speedometer on the dashboard, which got the markup to 400 kilometers per hour. As for the tachometer, it is designed for 10 thousand revolutions.

OMR (Officine Meccaniche Rezzatesi), a recognized world leader in the production of systems and components for the automotive industry, developed aluminum gas pedal and brake pedals that are adjustable in 16 different positions. This has had a positive effect on the overall ergonomics and performance of the machine. 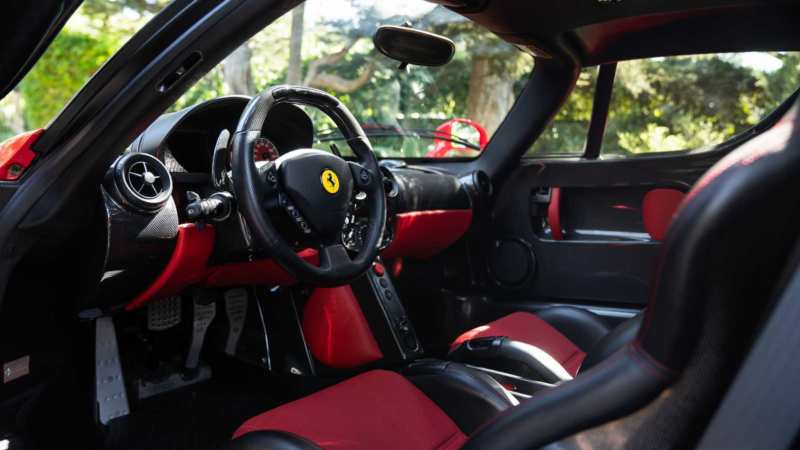 Interestingly, each customer has individual seats explicitly produced for him. It turns out that the owner himself also chooses the finishing materials for his headquarters. For the best acceleration dynamics, the steering wheel is equipped with a red indicator that lights up at the best moment to change gear.

Regardless of the sporty bias, the car already boasted climate control, a high-quality audio system, electrically operated windows, and leather seats specifically designed for each owner. It should also be understood that the centers are not equipped with adjustments. The central console is decorated with large nozzles of the climate system, under which there are regulators of the same climate system. In general, everything looks relatively restrained, which fully corresponds to the high-speed car.

Many people are very interested in the Ferrari Enzo’s technical characteristics, which is justified, as they fully correspond to the sports car. This unique supercar is driven by a V-shaped atmospheric 6.0-liter 12- cylinder 48-valve power plant, which generates 660 horsepower (657 Nm).
Such capabilities were very impressive for those years. It was decided to use a chain drive for the timing mechanism.

The Ferrari Enzo has two aluminum fuel tanks with a total capacity of 110 liters. 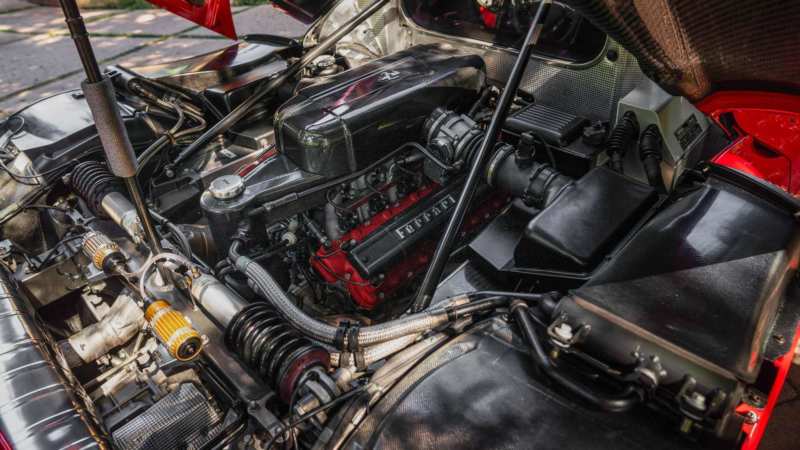 A six-speed automatic gearbox with electro-hydraulic control by Magneti Marelli is used as the link between the powerful engine and the wheels. It takes only 3.6 seconds for the Ferrari Enzo to reach the speed mark of 100 kilometers per hour.

Despite the relatively small ground clearance, the car is quite soft, as for a sports model. The car is easy to steer, it is excellent in corners, as there are electronics. Powerful ceramic mechanisms are responsible for the braking system, which entirely breaks the Italian supercar.

At the moment of a strong start, the rear suspension prevents the car from sagging because the box selects a new gear in just 15 milliseconds based on the power unit’s torque.

There are quite a few different tuning studios that have chosen to focus specifically on the Ferrari Enzo. Some of them work only for individual buyers, while others throw all their efforts into increasing power, design, and other things. There is no specific cost since the car is quite rare, but it is essential to understand that they ask a lot of money for it.

As a result, we can say with confidence that this model will go down in the history of the Italian company for a long time, even though there is already a kind of successor in the face of Ferrari LaFerrari. Even today, it looks fantastic, but it is valued not only for its appearance but also for its technical characteristics. Many people choose this car because of its uniqueness, individuality, and tribute to the brand’s founder, whose honor and was produced this supercar. 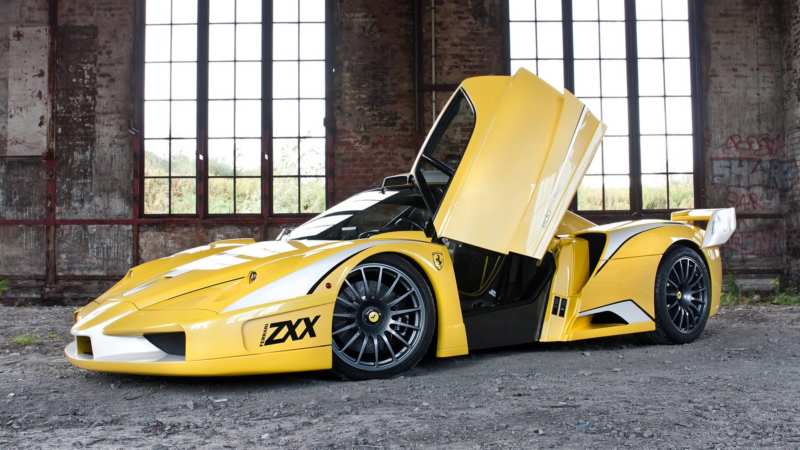 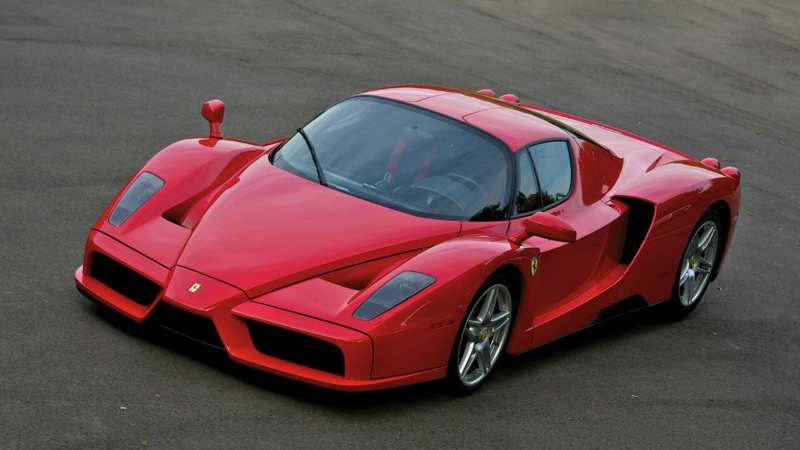 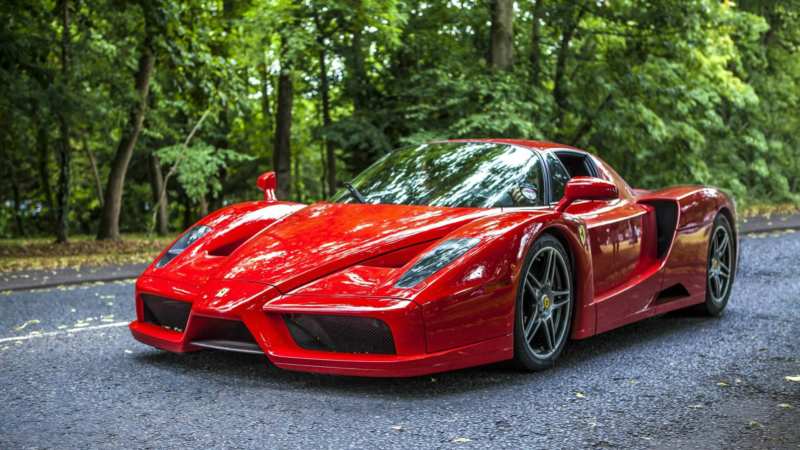 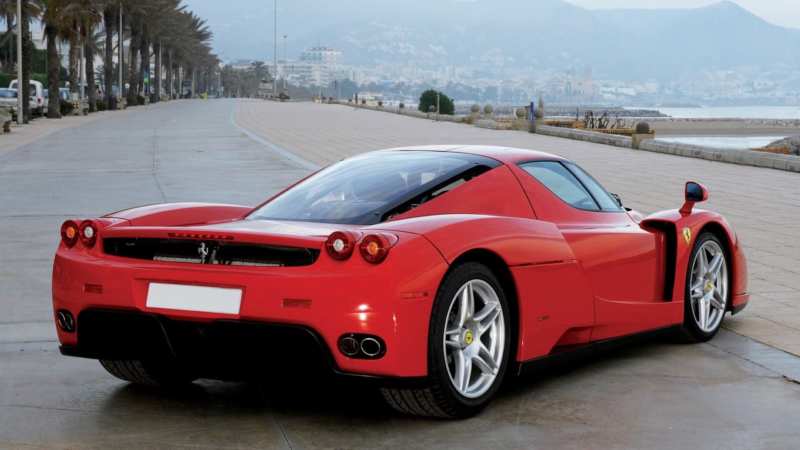 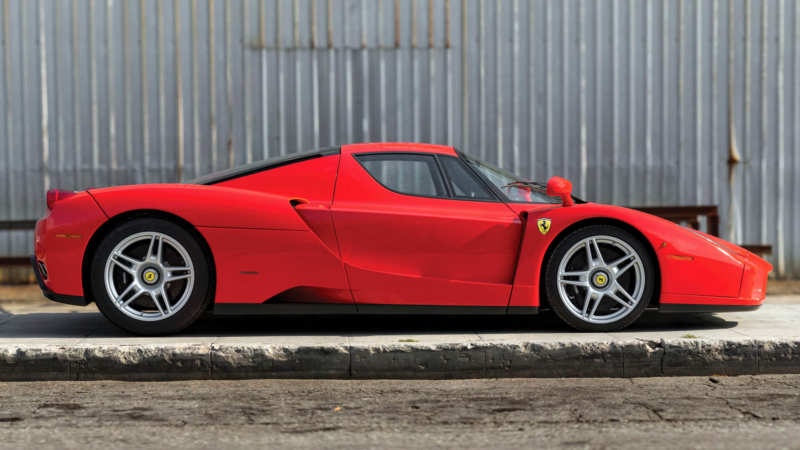 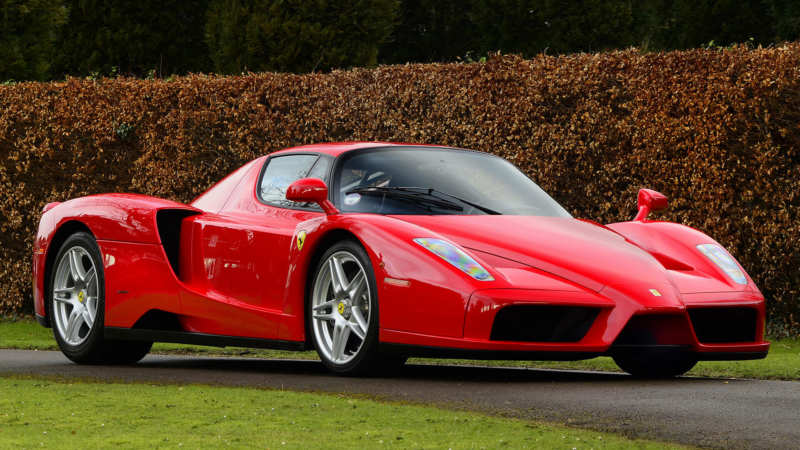 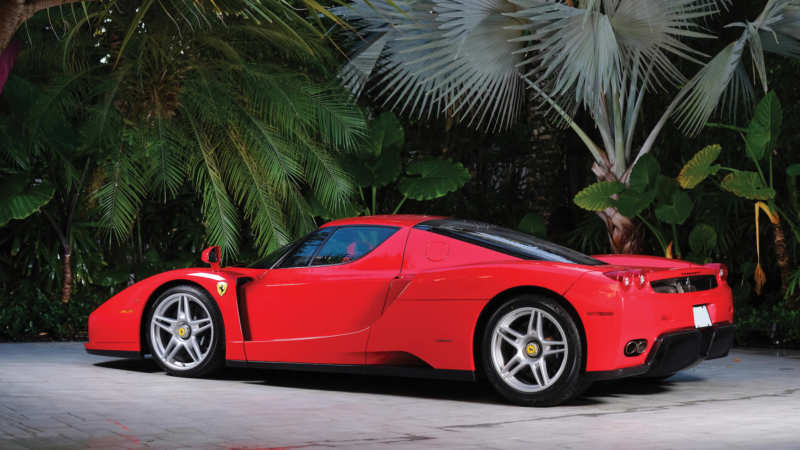 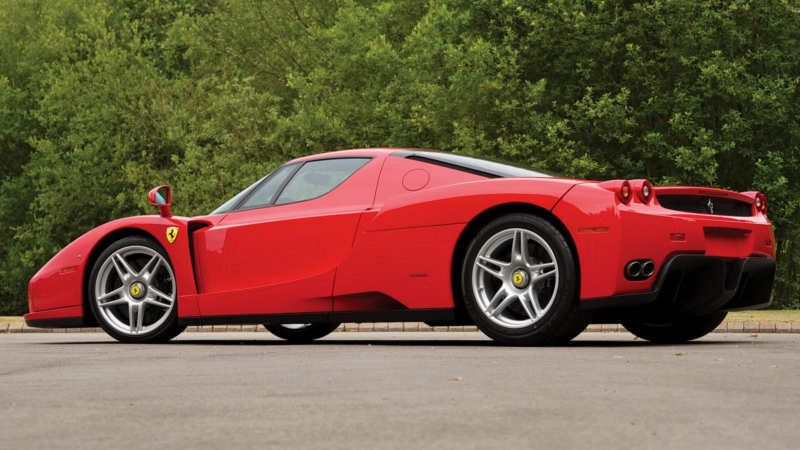 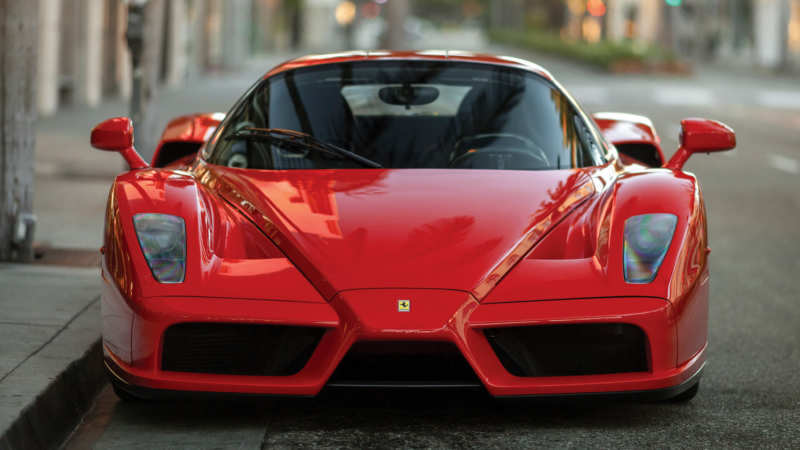