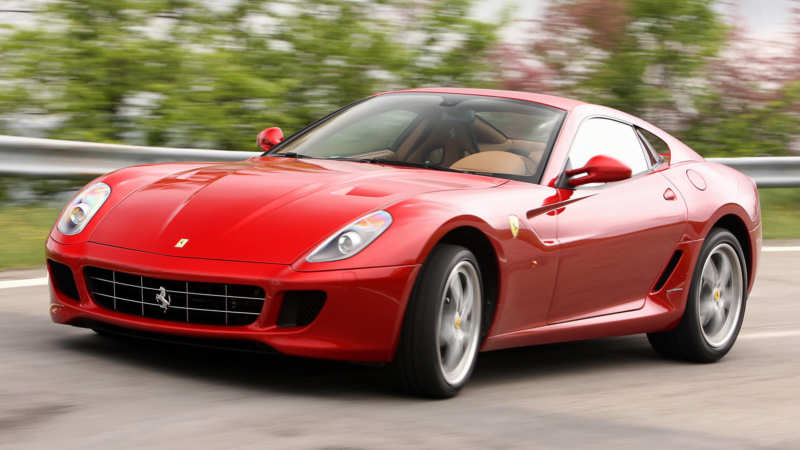 The Ferrari 599 GTB Fiorano is a rear-wheel-drive two-seater sports car with a petrol V 12-cylinder engine. This was the new flagship model of Ferrari, which was officially unveiled during the Geneva Motor Show in February 2006.

In addition to the basic version, which has a 670-horsepower power plant, the two-door car from Maranello also has an open and track version. This Italian car is the flagship supercar with a classic layout, which replaced the car Ferrari 575M Maranello, which was produced within 10 years. It had been produced until 2012, when it was replaced by the Ferrari F12 Berlinetta.

And in 2010, the Italians presented a modified Ferrari 599XX, which received a light body and forced to 730 horsepower engine. Since this car was not certified for normal roads, it was used only on race tracks and proving grounds. That’s why later the company released a “road” version of such powerful coupe, which was named Ferrari 599 GTO. In total, only 599 such copies of the Ferrari 599 GTO were produced. The whole model range is Ferrari.

The Italian car has a very stylish appearance. The long hood of the beautiful, powerful and dynamic coupe is worth special attention. Today it is already in the order of things to talk about the lensed optics, but even then the “Italian” had it. It’s nice that such optics looks amazing here. The group of designers and engineers decided to raise it up and make the headlight itself narrow.

As for the hood, it has a lot of relief. Its curves can be noticed very easily, but it does not spoil the look of the Ferrari 599 GTB Fiorano. The front bumper itself can not be called very massive, but it boasts a good design and barely noticeable lip. The bumper itself is equipped with additional headlight washers, a radiator grille, as well as two air ducts, which are necessary to cool the front brake system. 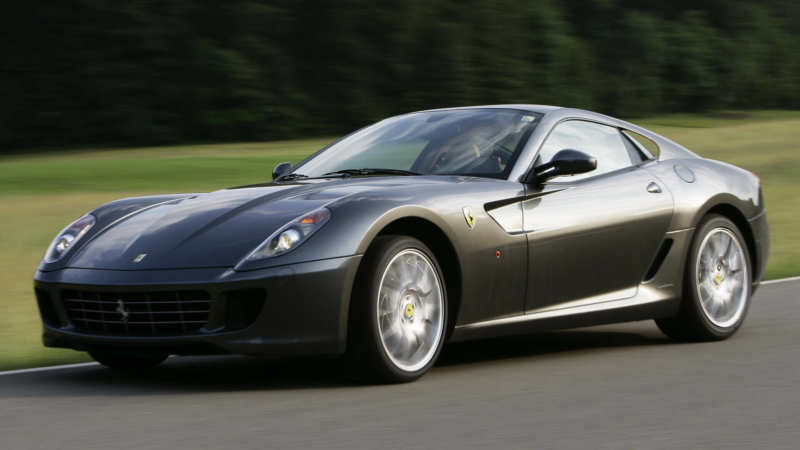 The Italian supercar is called “599 GTB Fiorano” for a reason. There is a special track “Fiorano” in Maranello, where Italians test their Ferrari cars. This is where you can find out how fast the new car is. Therefore, the Fiorano test track is very important for Ferrari.

The side part of the Ferrari 599 GTB got skirts, moldings, installed in a sport style rear-view mirror. There is also a stylish air duct, which leads the air flow to the rear brakes. By the way, the calipers have very large dimensions, so even here it becomes clear that the car stands out with quality brakes. The height of ground clearance is 130 millimeters. The car has been tested in the wind tunnel and has a aerodynamic coefficient of 0.33, which is an excellent indicator. 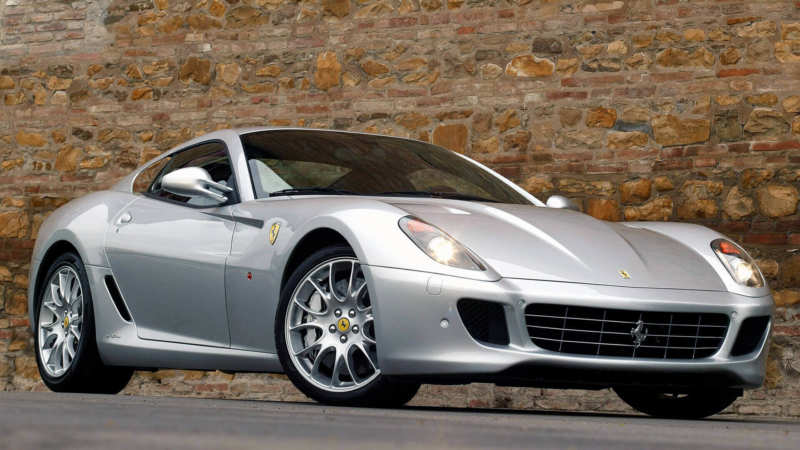 When driving at 200 kilometers per hour, the GTB body is pressed against the road with a force of 70 kilograms. When the speed is 300 kilometers per hour, 160 kilograms already “press” on the car. If we take the version Ferrari 599 XX, it has a stronger downforce. At 200 km/h the car is pressed to the road with extra 280 kg, and when driving at 300 km/h the number increases to 630 kilograms. In addition the luggage compartment of the Ferrari 599XX has two special fans that suck the air out from underneath, which allows the car to be pressed even harder against the road.

The rear boasts signature optics that are repeated on many of the company’s cars to this day. In addition, the stern of the Ferrari 599 Fiorano got a massive bumper, equipped with a massive diffuser. At the edges of this diffuser is beautifully “equipped” with two exhaust pipes. Many may notice a certain resemblance to the four-seater Ferrari 612 Scaglietti. This is partly due to the fact that Frank Stephenson, a specialist from Pininfarina, worked on the appearance of the two cars. 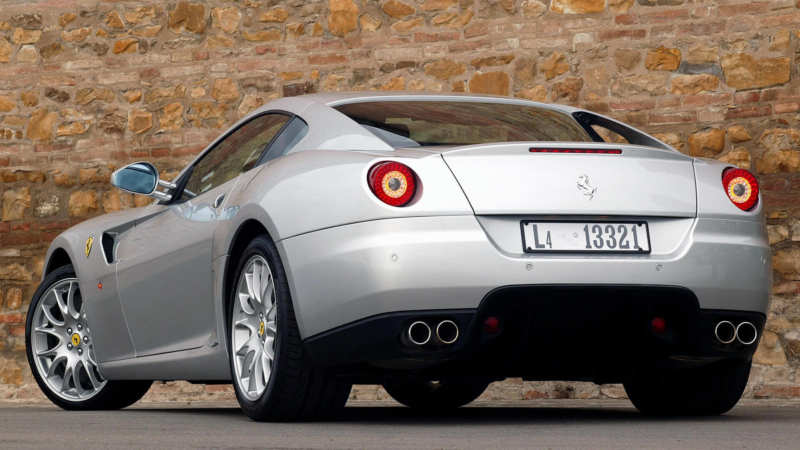 If you compare Ferrari 599 with Ferrari 575M Maranello, the first model became 34 percent lighter and 13 percent stiffer. It is interesting that with all this, the layout and principle of the body structure have not changed dramatically. As a separate option, you can equip your track car with 20-inch challenge wheels that have low-profile tires.

The “599 GTB” inset in the name is also there for a reason. It speaks about a V-shaped engine, the working volume of which is 5,999 “cubes”. And the abbreviation GTB means – Gran Tourismo Berlinetta.

Looking at the exterior of the Ferrari 599 GTB Fiorano, it is clear that the designers tried to surprise the public with their design. However, after getting acquainted with the interior of the car, it is clear that here the design team also tried to surprise the public. Moreover, they succeeded. The Italian Ferrari 599 sports coupe boasts a functional and beautiful interior, which cannot be said about the past models of the company.

In front of the driver the Italians placed a 3-spoke steering wheel, which received alcantara, leather and carbon fiber. In addition, the steering wheel has electric adjustments. On the “steering wheel” itself there is a key, which launches a powerful power unit. Further you can notice a little bit non-standard for those times dashboard. In its central part there is a massive tachometer, on the right side a compact speedometer, on the left – a solid “onboard computer”, which displays a lot of useful information about the condition of the vehicle. 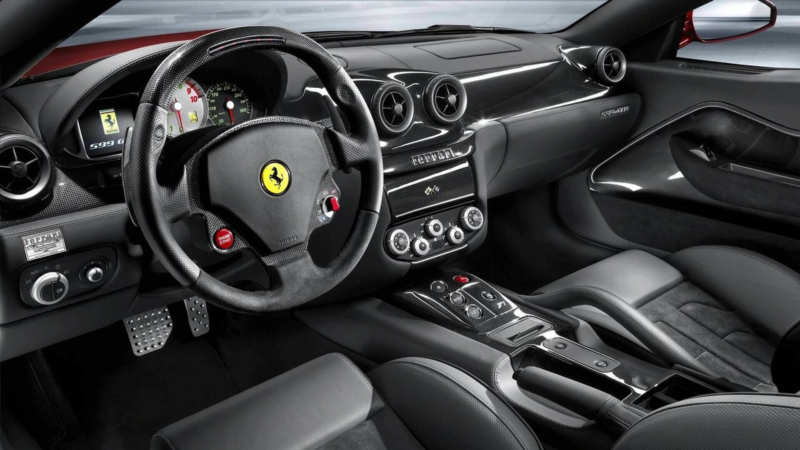 Although the car has a very sporty engine sound, it does not affect the passengers’ peace of mind in any way. The Ferrari 599 does not transmit unnecessary vibrations or excessive noise. If you look closely at the interior, you can notice the “twist” – manettino evoluto, which has five modes – from winter to flight mode. In addition, it is important to note that although externally Ferrari 599 looks like Ferrari 612 – it is a 2-seater coupe, so behind the backs of the front seats here you can see only a shelf, but not a compact couch, which is installed in the 612.

The central console has almost nothing except a radio and climate system controls. However, it should be noted that designers have made all this beautifully and with taste. The tunnel, placed between the driver and the passenger, is equipped with buttons to select the mode of the gearbox. In addition, there is a place for the “handbrake”, as well as a handle for the passenger. The interior of the Ferrari 599 GTB stands out for its quality upholstery, sports seats with good side support, which got double seat belts, as well as a small amount of space. Regardless of the sporty bias, the car got a trunk that holds 320 liters.

Under the hood, the Ferrari 599 GTB Fiorano gets a powerful atmospheric V-shaped 12-cylinder 6.0-liter F140C powerplant that generates 620 horsepower (608 Nm). It is often not customary to talk about the fuel consumption of such cars, but the manufacturer claims 17.9 liters of gasoline in the combined cycle.

It is important to note that the Ferrari 599 GTB Fiorano is the first car from the company, which received the system that distributes the traction of F1-Trac. Such technology with a program that prevents slippage by distributing torque to the wheels. This has a positive effect on acceleration during cornering. All adjustments of this system are shown on the on-board computer display. 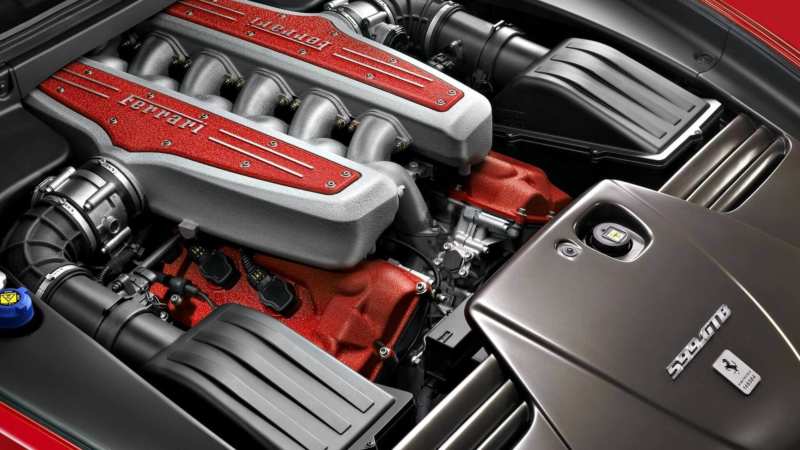 All torque forces are transmitted to the rear wheels thanks to a six-speed manual gearbox. Such technical characteristics of the Ferrari 599 GTB Fiorano allow the sports coupe to “shoot” from a place to the first hundred, taking only 3.7 seconds. The maximum speed is 330 kilometers per hour. Also provides installation of a six-speed automatic gearbox.

As the base, Italian engineers decided to use a welded spatial frame, which is made of aluminum components, implying shifted to the rear of the power unit and shifted back transmission. This allowed to achieve a 47/53 axle weight distribution. Lightweight body is made of aluminum, so the weight of the truck dropped to 1 688 kg. As for the suspension, it is independent. The front end is equipped with double wishbone mechanisms, and the rear – multilever mechanisms.

On each wheel there is a place for electronically controlled shock absorbers, which received magnetorheological fluid. The suspension handles all small bumps perfectly and can be adjusted to the road. It can be soft or more rigid. The sports coupe is perfectly controlled with electric power steering. The braking system, as mentioned earlier, is very strong – on each wheel there are powerful disc mechanisms, complemented by electronic systems. 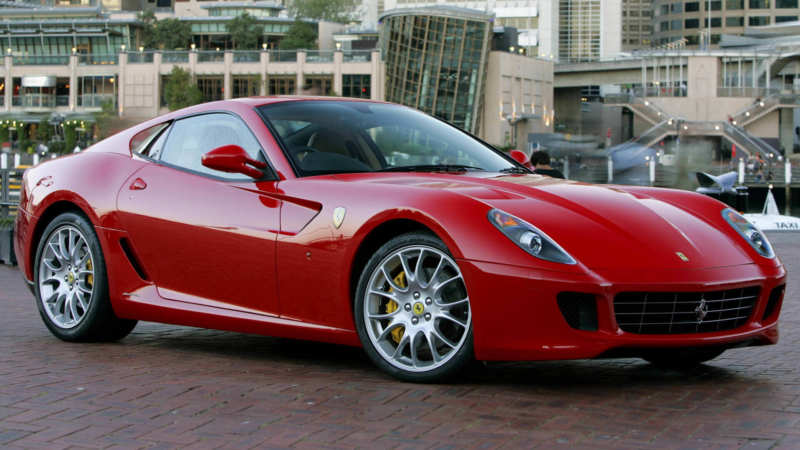 The Italian coupe has enough rivals, some of them are very serious. So, Aston Martin Vanquish, Ford Mustang, Lamborghini Murcielago, Chevrolet Corvette C6 can compete with Ferrari 599 GTB.

What can we say at the end? The Italian company has produced an excellent sports car, which fully meets the standards of its brand. It has everything, company tradition, sporty appearance, stylish and quality interior. This beautiful car, needed for pleasure. The Ferrari 599 GTB Fiorano owner will get only positive emotions and good mood. A lot of specialists and engineers of the Italian company worked for that. They were able to achieve the ideal comfort/power ratio. Thanks to the SCM electromagnetic suspension, it is possible to adjust its rigidity and steering quality. 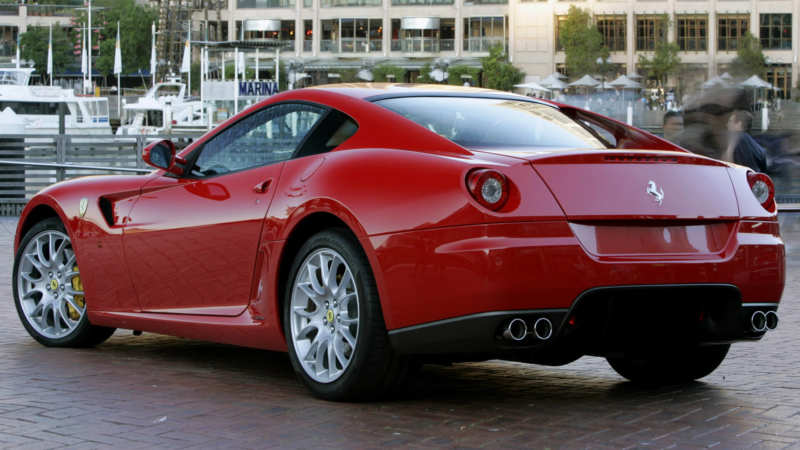 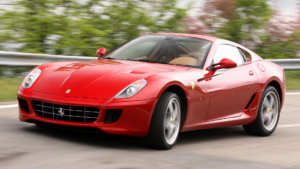 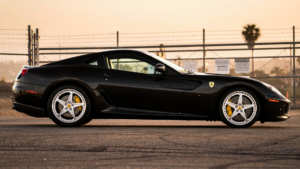 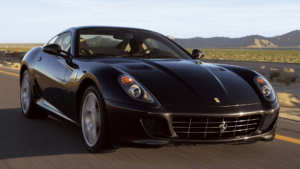 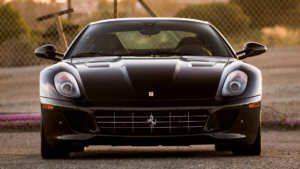 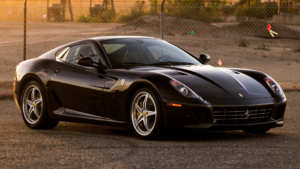 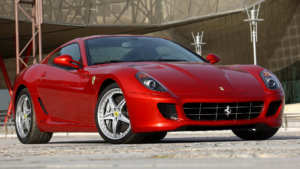 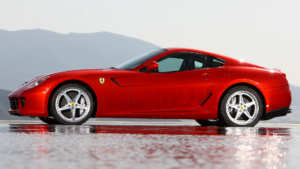 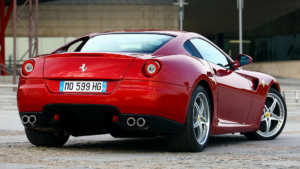 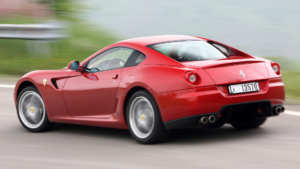