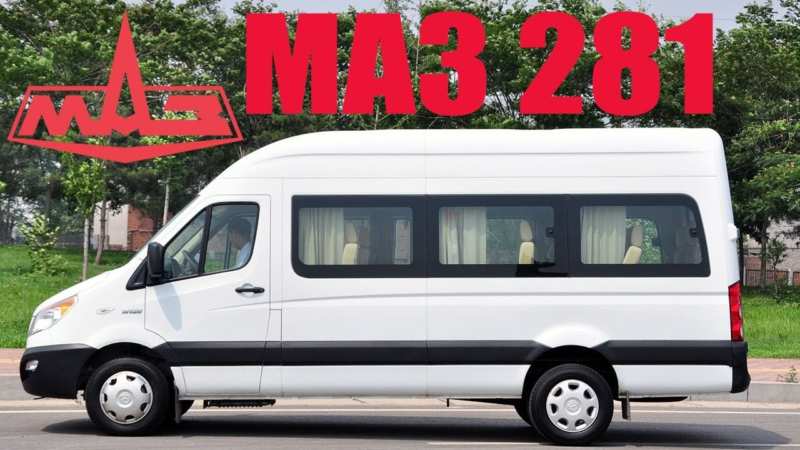 Looks like our Gazelles have a serious competitor. These are MAZ vans and minibuses, the production of which will start in November.

The certification bodies of the Republic of Belarus have published the OTTS – the official approval of the agency, which will allow MAZ OJSC to start production of a minibus, a van at its facilities. According to the documentation, the vehicles will receive indices 281, 3650 respectively. The whole MAZ model range.

The bus turned out to be Chinese?

A. Rogachuk, Chairman of the Brest City Executive Committee, noted that MAZ’s own products are only adapted versions of JAC Sunray from the Celestial Empire. Information for the sceptics of “all Chinese”. According to some experts, the characteristics, reliability and durability of the JAC Sunray is comparable with the Mercedes-Benz 2nd generation.

Some even claim that the Chinese have openly copied the Mercedes minibus – it turns out perfectly. However, JAC Motors assures: the Italian design bureau was in charge of exterior design, and experts from Japan were involved in interior design. It is possible that Belarusian products will get to the Russian market as well.

The fact is that the form of the TTFS and certification standards apply to the entire Customs Union, and Russia and Belarus are part of it. On the other hand, in July, the requirements for localization of vehicles exported within the Union were tightened. The percentage of localized parts must be at least 50% in order to import the vehicles duty-free. Sino-Belarusian Mazelle is planned to be assembled in a large knotty way, which excludes such “assimilation”.

Recall that Minsk Automobile Plant has already made attempts to produce a MAZ minibus. In the period from 2011 to 2013, the King Long vans, copies of Toyota Hiace H100, were assembled in small series. The products of the MAZ plant are represented by heavy machinery: buses, dump trucks. Therefore, the production of the van, minibus will be an interesting experiment for the Belarusian carmaker.

There’s not much information about the interior of the cars yet. It is known that for an additional fee it will be possible to install options such as parktronic, satellite navigation, electric glass elevators, engine heater (very useful in winter) and air conditioning.

Many people are interested in technical filling of the van and MAZ minibus. Until recently, this information remained unknown, the Belarusian carmaker did not want to disclose it. Today we have detailed data on the technical characteristics of the novelties.

Both vehicles will have an independent suspension on the springs in front, complemented by shock absorbers and stabilizer. The rear suspension is spring loaded, dependent. There are also shock absorbers here. For convenience, the steering wheel will be equipped with a hydraulic booster and a 2-circuit brake system. Declared ABS, EBD. Front brakes will be disk brakes, and rear brakes will be drum brakes.

Both vehicles will receive a JAC turbo diesel engine, which is quite expected. It is an in-line “four” with a longitudinal arrangement, the volume of cylinders 2746 cubic centimeters, capacity of 149 horses. Certified for Euro-5, there is a SCR system. As for the box, we should expect a 6-speed JAC.

Let’s start with a minibus MAZ-281, which has the category M2 and the formula of wheels 4 x 2. The rear-wheel drive vehicle has an all-metal body and 5 doors. The doors will open from behind (swing), two more in front, in the cabin. Passengers will enter the cabin through a sliding door on the starboard side. The new MAZ minibus has the following dimensions:

Like the new MAZ minibus, the van of the Belarusian manufacturer will have the overall dimensions of 6 x 2.1 x 2.8 meters. The permissible weight is 4050 kg.

In October, it turned out that the Minsk MAZ-281 plant and its colleague MAZ-3650 would be assembled solely at the expense of the company’s own funds. Having considered all the financing options, including the attraction of borrowed funds, it was decided to do everything independently.

According to the plant’s management, this will make the project attractive for investors. In the future, the sales structure will be diversified and the sales markets will be expanded.