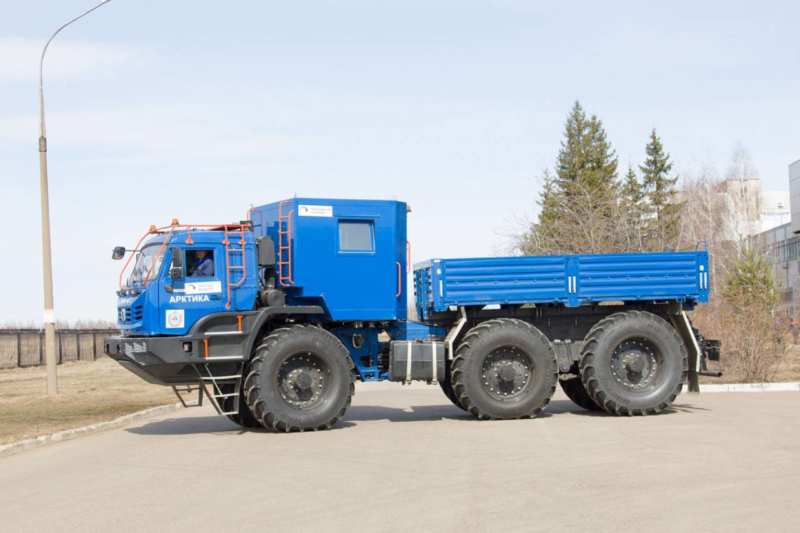 In December 2017, a prototype of a serious Arctic all-terrain vehicle was officially shown during the WuzpromExpo-2017 exhibition. The Kama Automobile Plant is again at the height and amazes with the freshness of its thoughts in the subdivision of extreme trucks and all-terrain vehicles.

This unusual truck is a conceptual version of “KAMAZ-Arctic” on low-pressure tires. From the very beginning, the truck was intended to study the Far North region. The novelty was designed to function effectively in an extremely harsh climate. However, it seems that a truck of this scale can be used in other parts of Russia. The whole KAMAZ model range.

On the whole novelty

The real “giant” was designed jointly by PJSC KAMAZ, Moscow Polytechnic University, Scientific and Technical Center “Industrial Design” and Bauman Moscow State Technical University. Almost immediately after the exhibition center, the KAMAZ Arctic all-terrain vehicle was sent for real tests to Yakutia, where it will be able to plunge into the “harsh reality of the local climate”.

There is no doubt that extreme weather conditions in this part of our country are ensured. The aim of the project is to create a modern and competitive mass production of a unified model range of cross-country vehicles to solve transport problems in the Arctic and Far North regions with the use of advanced developments of PJSC KAMAZ. 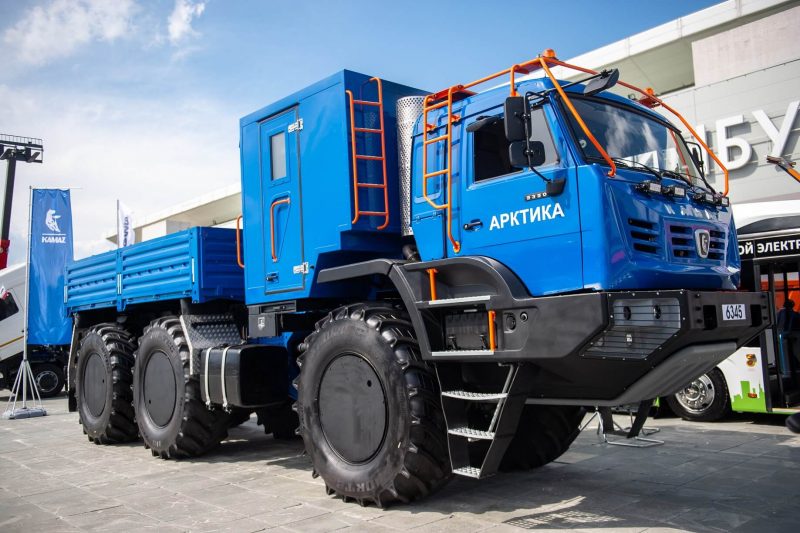 There is a residential module equipped with a bathroom. There is also a place for cooking and a place for rest of the driver. Do not forget to install the drawers and shelves of the built-in type, which turned out to be compact. In total it is possible to settle down to three adults. The KAMAZ Arctic housing module has, apart from beds, a gasoline generator, electric inverters, a stock of drinking water, a kitchen with a hob and a microwave oven, as well as a shower.

It’s nice to have a TV and satellite phone in the new product. For the design of the living space was responsible for the SKB MAMI employees. The specialists of this unit have fully combined practical features of the truck with a rather stylish appearance and reasonable ergonomics that meets all the standards of comfortable and autonomous living in the housing compartment. 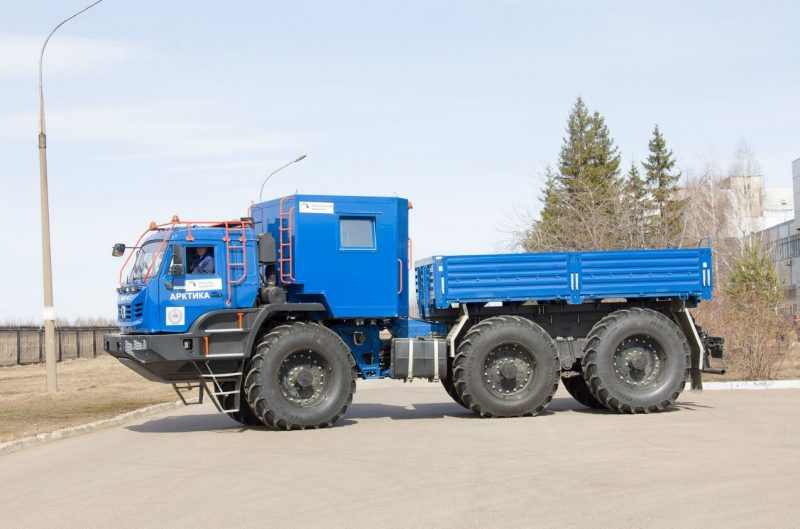 A special folding ladder leads to the module. This design is a full-fledged living space in which passengers can live or expect help in difficult weather for at least 3 days.

As an addition to the accommodation module there are air-conditioners to help fence off the housing compartment from the inhabitants of the northern part of our country: mosquitoes, mosquitoes and dwarfs.

This novelty has a classic Kamazov V-shaped, eight-cylinder engine and manual gearbox. Certification has been passed as a snowmobile. In order for the vehicle to be suitable for the Arctic conditions as well as for the regions of the Far North, the vehicle must meet sufficiently stringent conditions.

KAMAZ Arctic should be operated at an air temperature of -50 and even -60 degrees Celsius. The passability should be at the height even in case of complete impassability, which concerns not only the snow cover, but also the conditions of weakly bearing soil, the spring thaw. Operation is expected on winter roads.

The special machine has an autonomous generator. Frame of a breaking sample. Thanks to the latest developments of this plan, the truck turns by bending the frame itself. This is due to the huge parameters of the wheels used, which KAMAZ has quite wide and do not provide an acceptable resource for a standard turn.

The joint unit has two sheet box constructions connected by two ball joints. Turning around the axle is done by means of hydraulic cylinders. The maximum folding angle is 45 degrees. The KAMAZ version with 6×6 and 8×8 wheelbases is provided. Off-road version with wheelbase 6×6 will get 2 versions: “size” and “oversize”. The overall version has the ability to move freely both off-road and on the public road.

The second version is designed for off-road use only. The ground clearance height is 650 and 600 millimeters. The curb weight is similar to 17 tons. Loading on KAMAZ Arctic can be up to 13 tons, so the total weight of the car – 30 tons. The model has a KAMAZ power unit, which develops 400 horsepower. It is synchronized with “mechanics” designed for 16 speeds.

Silovye units of cargo all-terrain vehicle KAMAZ Arctic are capable to work at temperature about -60 degrees on Celsius. 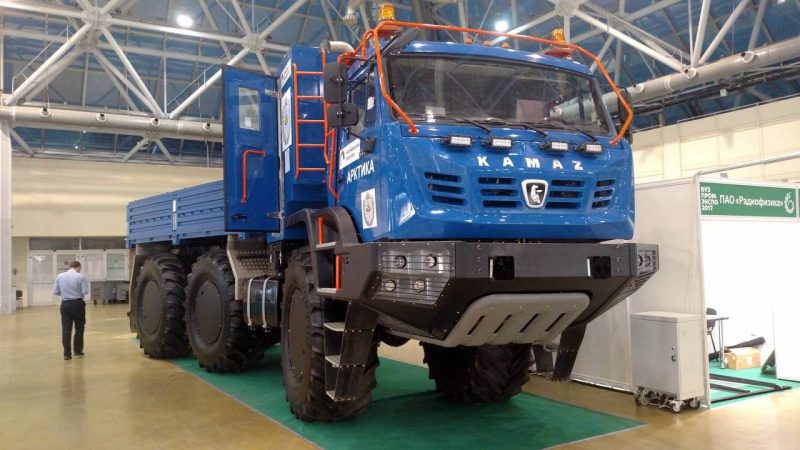 The version with 8×8 wheelbase also received 2 versions: “size” and “oversize”. The height of the ground clearance is the same. The curb weight of the “overall” is 25 tons, and the “oversized” – 24 tons. Cargo, domestic truck can take up to 15 and 16 tons, respectively. It turns out that the total weight of the truck will be about 40 tons.

The four-axle model has a promising KAMAZ R6 910.12 engine, which allows to develop 450 “horses”. There is a six-speed automatic transmission from Allison. As for the suspension, there is a front spring suspension applied from the rear suspension KAMAZ-5460. Shock absorbers and stabilizer were used from KAMAZ-65225 suspension.

As for the rear suspension, it’s balanced. The maximum speed of movement does not exceed 65 kilometers per hour, and for acceleration it will take as much as 50 seconds, but do not forget what kind of car we have in front of us and what goals it has. This car consumes an average of about 33 liters of diesel fuel for every 100 km.

Clutch pneumatic with hydraulic booster. Fuel tank for 6×6 version is 350 liters. Clutch is frictional, disk, dry type. There is a function of electric motor heating, as well as liquid heater.

After the introduction of a more mass production of this type of all-terrain vehicle, the machine can be used even in the most remote areas of Russia. Its unpretentiousness, high cross-country ability, practicality, load-carrying capacity and comfort do not leave anyone indifferent. It is nice that in the residential area you can wait for the harsh weather or wait for help. 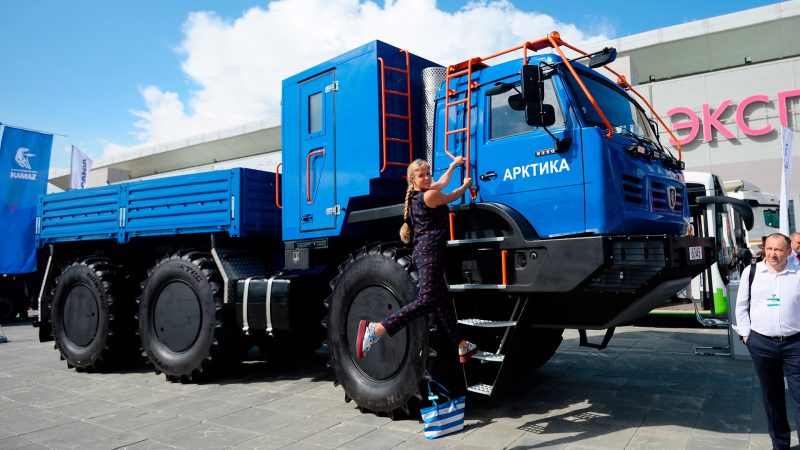 And all the amenities are there. According to the company’s management, it is possible to spend at least 3 days inside this compartment, and with the average use of resources for about a week or more. It is obvious that Russia intends to use such vehicles to improve the social and economic part of the hard-to-reach areas of our land. Only time will tell how the machines will perform after a long period of time.