A few years ago, Tesla was almost a monopolist in the electric car market. In 2018, a real revolution took place. Several brands presented premium electric cars at once. Among them were Jaguar with its I-Pace worth 5.9 million rubles, Mercedes-Benz EQC and, finally, Audi e-tron. How do you like it, Ilon Mask?

E-tron is not just a German car, which is charged from a socket. This is the first serial Audi electric car. It has a decent power reserve, spectacular appearance and a good interior, belongs to the premium cars. Let’s consider all the key features of the German electric car Audi e-tron. The whole model range is Audi.

Outside, the etron resembles the Q8 flagship crossover. However, the car is not a full copy of Q8. It has an original optics, extended side sections. “Four rings” decorate the 6-angle radiator grille. The Audi e-tron Quattro bumper features slots in the air ducts.

If you look at the profile, there is a slight resemblance to “ku-eight”. Here are the same forms of glazing, modest windows in the rear racks, punched wings. The wheels are decorated with 21-inch rims, “dressed” in Eagle tires. We note the narrow headlights on the LEDs OLED, which are well placed on the stern. They give out a juicy, uniform light. 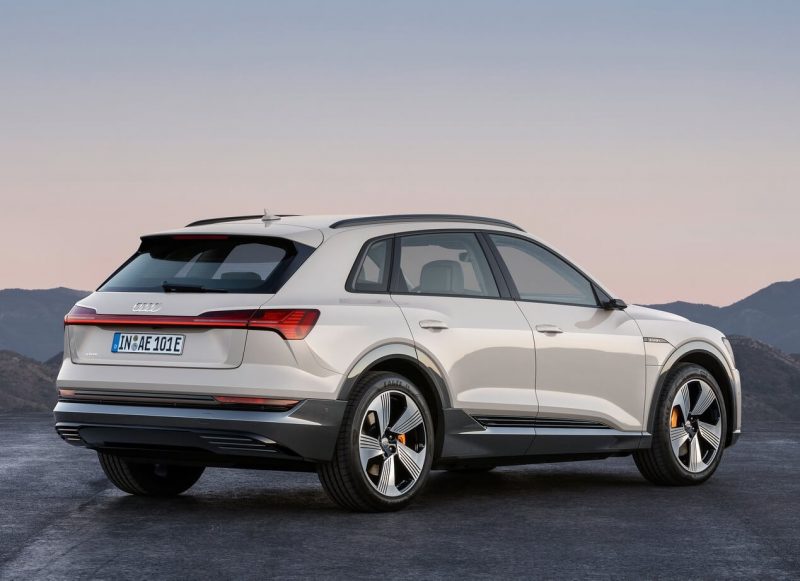 In the Audi e-tron salon everything seems to be painfully familiar – especially if you have already been inside other models of the German brand. The steering wheel is 4-spoke, informative central panel is complemented by 2 large screens. But there are also their own “raisins”. For example, on the torpedo is a selector. On its end there is a key responsible for shifting the transmission.

Despite the fact that digital mirrors are still prohibited in the U.S. and Europe (the only country that has given good will is Japan), such an option for Audi e-tron Quattro is provided. 7-inch screens are integrated into the door panels – the picture is displayed on them. There will be 3 modes available: parking, turns, highway.

The sofa behind the couch fits 3 adults perfectly. There is no central tunnel, which increases comfort – there is much more space available. The standard trunk capacity is 600 litres, increasing to 1700 litres. Under the hood and an additional compartment – it is convenient to carry charging and tools.

The Germans were listening. Applied 2 electric motors, the total capacity of the passport – 408 horses, 600 Н∙м of torque. But this is the peak power, which will be available for eight seconds. In daily operation you can count on 360 horsepower. A speed limiter is installed, and the electric car will not be able to step over the bar of 200 km/hour.

In order for the speedometer hand to be at 100 km/h, the crossover will need 5.7 seconds. The car can be used with a trailer weighing up to 1814 kg, a set of Li-iOn batteries weighing 700 kg.

“According to the passport, the electric Audi travels 400 km from one charge. This is the standard figure for 2018, which is no longer surprising. In real operation, the indicator will be more modest. But Audi sets quite ambitious goals – in the next few years to bring this value up to 600 km without recharging.

The battery capacity is 95 kilowatt-hours. The charging station is the best option for “filling”. In just 30 minutes, the electric car is charged to 80%. When there is no charging station, you will have to “stand on the wire” all night, charging from a regular socket. Quite a typical situation for modern electric cars. Of course, there was a system of recuperation. Thanks to it, the range increases by 30%. Electro-hydraulic brakes are an unexpected solution for a car of this format.

The model is equipped with an air suspension, which allows you to adjust the ground clearance yourself. The range is decent – 76 mm. Very convenient if the car is stuck somewhere. Available in seven driving modes, which greatly enhances the control options.

At the end of the year, the new product will start selling in Europe. The e-tron will be assembled in Brussels. The initial cost is 79,900 euros. At first glance, the price list is high, but everything is known in comparison. For example, the basic version of the “Tesla” X 75D will cost 99,830 euros, the maximum equipment R100D – 157,000 euros!

A lot of additional options are available, which in one way or another affect the price. For example, leather upholstery, panoramic roof type, 4-zone climate control, Bang & Olufsen audio.

Lubomir Naiman, Audi’s representative in Russia, said that in the middle of 2019 the coolest Audi will appear on the Russian market. The company is well aware that the electric car market in Russia is just beginning to emerge. Therefore, it is not worth waiting for a big demand for Audi e-tron. “But with our car it will begin to develop much faster. There is no doubt about it,” Nyman concluded.

We advise You to read the article: Audi history 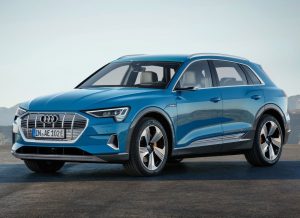