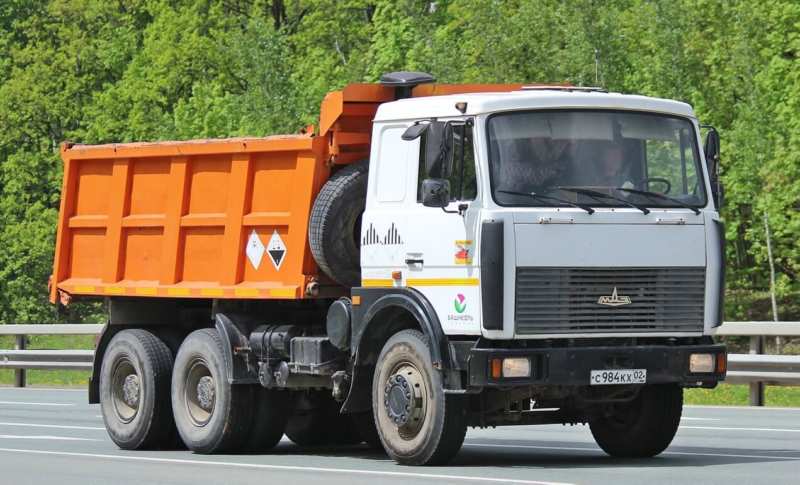 Another brainchild of MAZ, capable of carrying bulk cargo weighing up to twenty tons. Scopes of application, technical characteristics, as well as features of the model “5516” are impressive even now. Speaking of disadvantages, we will have to choose between practicality and comfort – the car is an animal, but it is not gentle. The whole model range is MAZ.

At the beginning of the 90s of the XX century Minsk Automobile Building Plant has already gained sufficient popularity. In addition, the developments continued to appear, and the next one was MAZ-5516. This model became the pride of the manufacturer as one of the most popular dump trucks. 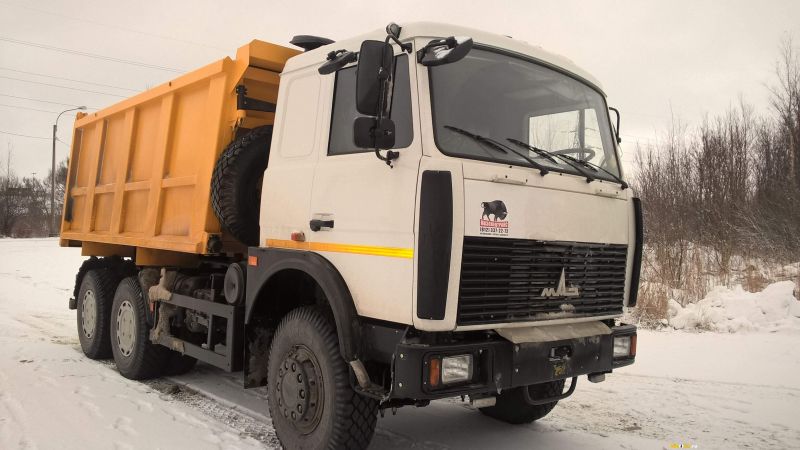 After the completion of inspections, tests and other tests, the first MAZ-5516 was released in 1994, ready for use. Due to its huge payload of 20 tons, the truck could be used in many areas:

The main emphasis was on the third point – construction. Since the machine has adapted to the transportation of bulk cargo, this sphere, like no one else, involved MAZ-5516. And taking into account the number of constructions after the collapse of the USSR, there was a lot of work for the dump truck.

The “5516” was a replacement for the “6303” and repeated many of its features. This means that there is still Soviet pragmatism and practicality in appearance. It was a rectangular cabin, the corners of which were smoothed. Traditionally, there was no hood, which gave the driver a good overview. All mechanisms were located under the cab. They also did not forget about safety – a massive front bumper served as a passive protection. 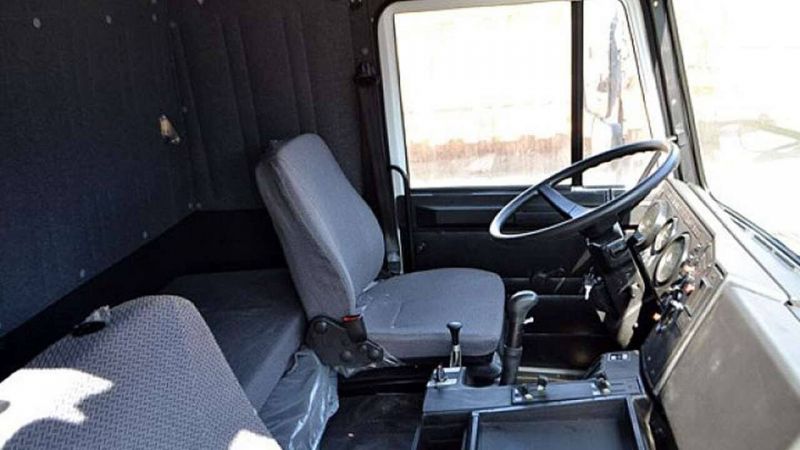 Convenience, though, rather necessity – steps on wheel arches helped to easily get into the cabin. The mirrors are adjustable so that the dead zone can be kept to a minimum. There was nothing superfluous in the design. Nevertheless, there was space and large dimensions, the board was also not distinguished by any signs. It can be said that the manufacturer in the design of the cabin last thought about the driver – the quality of painting, location of controls and thermal insulation suffered.

When buying the truck it was possible to choose a variant of the cabin from two existing ones, which differed in size and configuration. The longer one has a sleeping berth and three seats. After many years, the car has been modernized more than once, and it was related to the bodywork. Ergonomics and, even, visual appearance were transformed for the better. Of course, the changes have not turned the cabin into a luxury workplace, but the latest versions are much more convenient than the first ones. Taking into account all the changes, now the equipment and characteristics of the cabin of MAZ-5516 dump truck look like this:

The main problem of MAZ trucks was solved – sound and thermal insulation has changed significantly.

As well as the ergonomics, the producers have been working on the technical part of the work during the whole period of MAZ-5516 production. And, of course, the changes were extremely positive.

German engines are much more difficult to maintain, but their durability is much longer than that of domestic engines.

A large number of stages is achieved by double main gears for drive axles. In addition to the basic gearbox, MAZ-5516 was supplied at different times with such systems as YaMZ-2381-02; YaMZ-2391-02; ZF 9S109. Speaking about the suspension, it is worth noting that at first it was quite rigid, but later the suspension was reworked, which included the replacement of springs and reinforcement by means of “spar in a spar” technique.

The MAZ-5516 dump truck is capable of carrying cargo up to 30 tons, but in quarry conditions it will quickly kill the suspension. At the moment, loading and unloading of bulk materials is not difficult. The whole process can be controlled from the driver’s cab. In the early 2000s the body was heated. This innovation helped to solve the problem of cargo freezing in places with cold climate. It also allows liquid materials to be transported over long distances in winter.

As noted above, MAZ-5516 has many pros and cons. Taking into account the first versions, it is necessary to pay attention to the poor design of the cabin and the lack of conditions for comfortable work in it. The mechanical part, engine, transmission and other mechanisms are made and assembled qualitatively. Modern Minsk dump trucks have been improved in both aspects and make the owner happy. We will note the following as additional qualities of the machine:

We can say that the first versions of MAZ-5516 take on all negative reviews. Positive qualities in the last copies testify to the desire to develop at the manufacturer and to make the equipment better. High estimation is set not only by the fact that designers have corrected a lot of defects. At any time, the dump truck performed the tasks at the best level, and if necessary, even exceeded the forces stated in the passport.

As a result, it appears that MAZ is ground, first of all, to work. The history of production, in the course of which the working qualities of the machine improved, and the appearance and ergonomics of the salon became more pleasant, make it a very successful example in the service record of the Belarusian manufacturer.

The ability to carry cargo weighing 20 tons makes the dump truck legendary, along with excellent quality suspension and power units. At the same time, no matter what year the truck was manufactured, it is still in demand at many enterprises as a daily transportation. 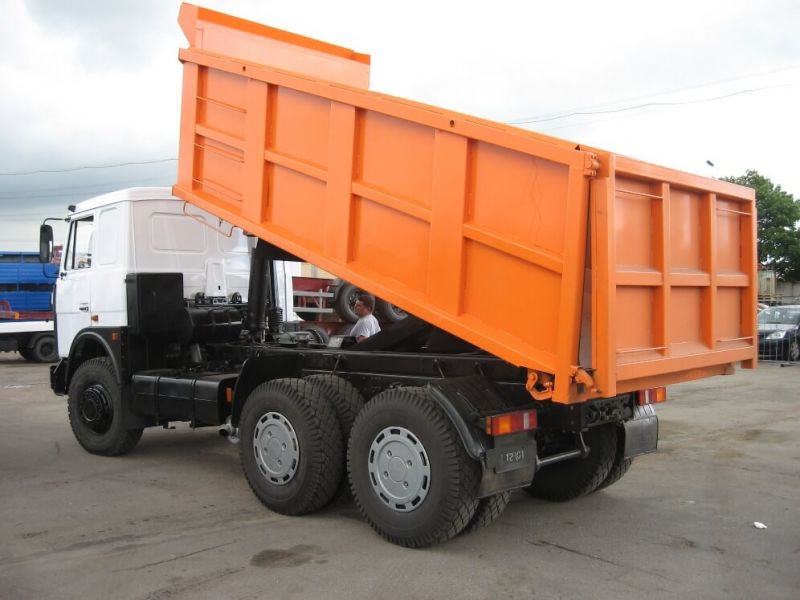 Alas, like most things in the world, MAZ-5516 remains imperfect, and some problems continue to be reminiscent of themselves. In particular, the salon has been improved, but not brought to a sufficient level. This car is reminiscent of a tough Spartan, who is focused only on hard work and does not think about comfort. Certainly, it influences the popularity of the car. After all, simplicity is now welcomed, and the less puzzles, the easier maintenance. 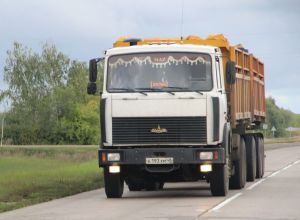 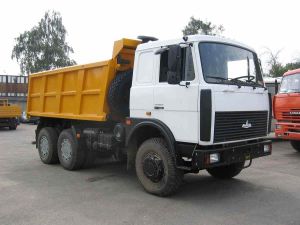 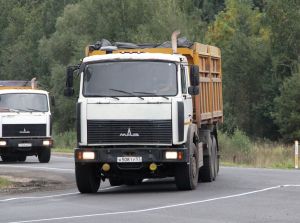 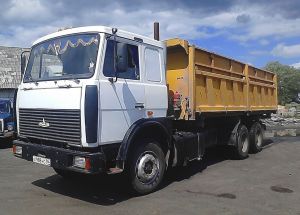 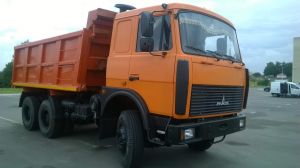 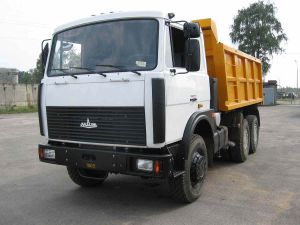 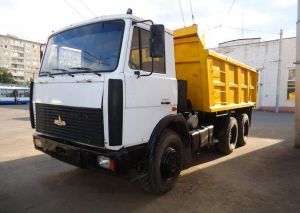 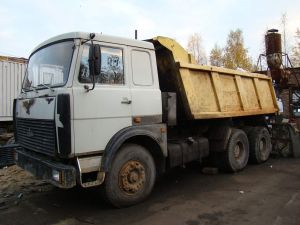 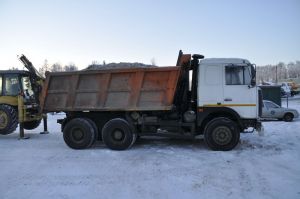