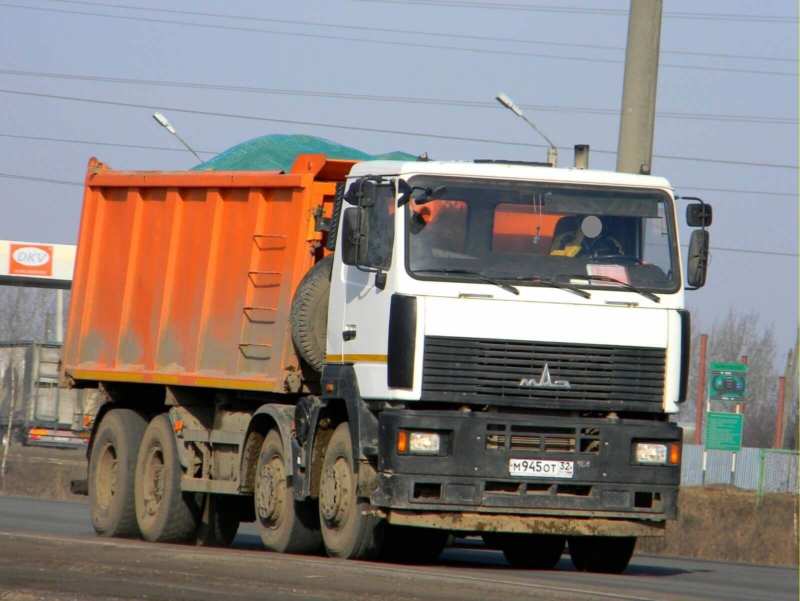 Legendary 40-tonnick – MAZ-6516. The truck is not only another modification, but also a representative of a new class – four-axle dump trucks. Working qualities of the machine, described in the tables, prove the power of the machine and its excellent abilities. The whole model range is MAZ.

Four-axle trucks with increased suspension strength are in high demand all over the world. The countries of the former CIS are not an exception. The only problem is that European representatives are not cheap, and it is difficult to find a reliable variant from the numerous choices of “Chinese”. Therefore, in 2007 Minsk Automobile Building Plant started production of the MAZ-6516 truck model.

Despite the fact that before that the trucks were produced on three axles, it became obvious that the machine had a significant increase in working capacity after the changes. The machine is a dump truck with folding rear cover and improved working systems. 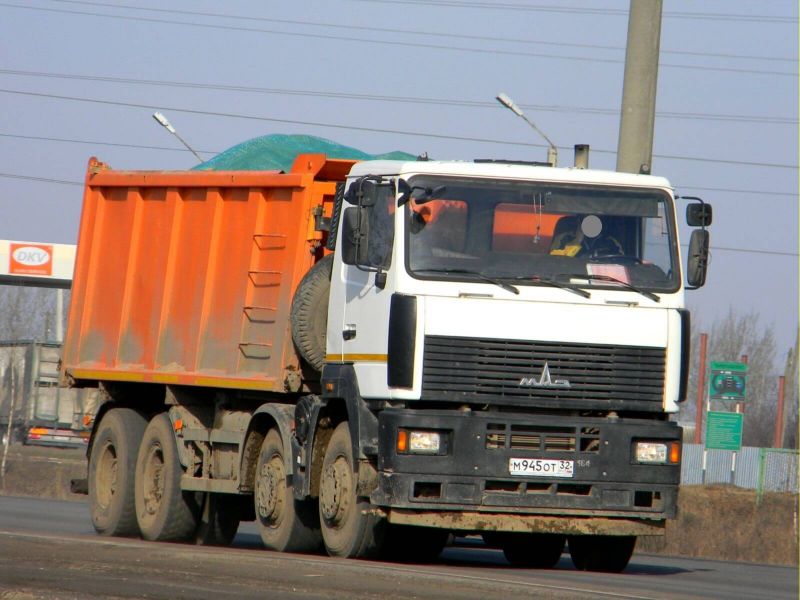 The exterior of MAZ-6516 bodywork contains traditional details, but in a modern interpretation. The index at the cabin is 6501. The location is high enough to use two steps. It is impossible to note the excesses in the exterior. The radiator grille is decorated with the abbreviation “MAZ”, and in the center of the big bumper there is a logo in the form of a bison moving to the left side. And despite the fact that symbolically the direction to the left means the way back or braking, it is impossible to say about this car.

The block with all light indications is located on the bumper. Fog lamps can be seen separately. Unfortunately, there is no protection for headlights, which is a strong disadvantage in construction and quarrying conditions. In addition, there are air intakes in the center of the bumper. There, but on the sides, are steps for access to the cabin. To make the lifting process more comfortable, the door opens wide enough and inside there are handrails to prevent it from falling down. 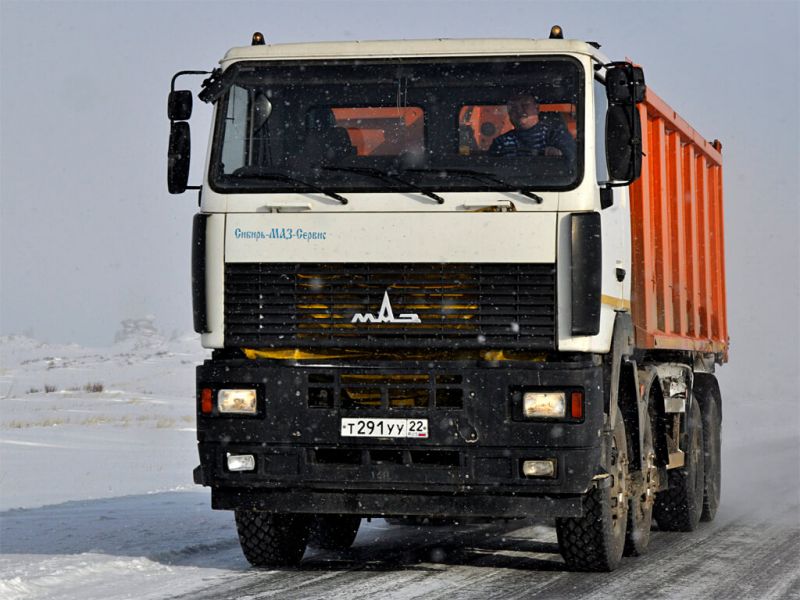 A large panoramic window that gives you a good view is striking when you hit the cab. The partitions between the side windows and the windshield are not thick but sturdy and do not create any inconvenience when it comes to manoeuvring in a narrow space. The front window is cleaned with three wipers at once, which means that even in severe weather conditions the visibility is good. Four mirrors are available for rear view, reducing the dead zone to a minimum distance. The mirrors are adjusted electrically. 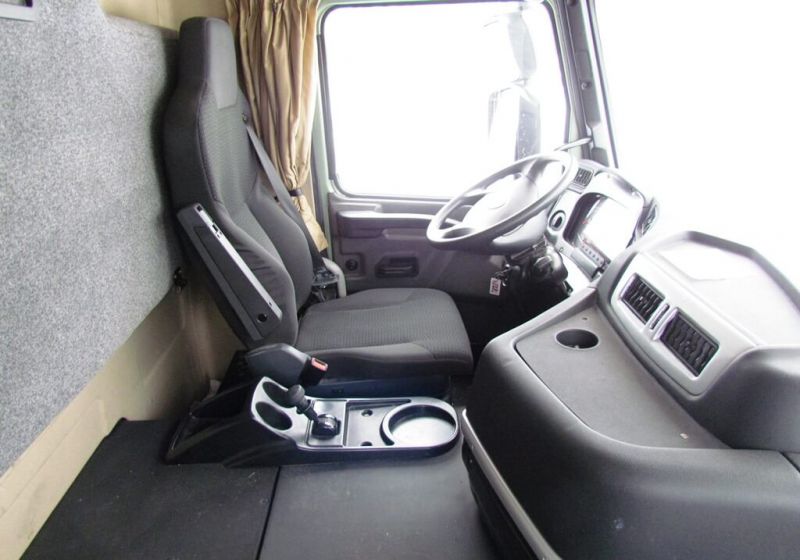 In the event of misting, the manufacturer has provided special electric heating. Then a comfortable seat in which the driver sits becomes visible. It is equipped with an air suspension and is adjustable in several modes, which allows the driver of any configuration to adjust it to his needs. Adjustment of the steering column is no longer a novelty for MAZ cars.

It is possible to change the position vertically, in terms of outreach and angle of inclination of the steering wheel. The release pedal is in a convenient position, next to the clutch. A similar way to adjust the steering wheel position can be found in Volvo trucks. Passenger comfort is slightly worse. The seat is just as comfortable, but does not have springs, which means a lot of shaking while driving.

But instead, there’s a toolbox or spare part box under the seat, even with a lock. The sleeping space is large enough to accommodate almost any type of person. For productivity and safety, it is important that the driver has a good rest during the long journey. Therefore, this element is given due attention.

MAZ-6516 is equipped with all necessary systems, and the design is brought to modern traditions. But all this would not be necessary, if not for the technical performance of propulsion units. The motors produced at the Yaroslavl Metallurgical Plant have been proving their practicality for many years; besides, other manufacturers of working elements all over Russia supplement the general idea of the machine’s mechanisms. Lorries of different modifications from “6516” were produced with two types of characteristics of the wheeled chassis:

The manufacturer of the gearbox type 12JS200TA is located in China.

Rear suspension – spring-balanced multi-layered with vertical arrangement of ladders. Fasteners between frame and suspension are provided by bolts made of special fasteners of steel grade. The rear and middle axles are equipped with anti-roll bars. The stabiliser is very noticeable during the course of the operation: the truck has a slight roll in the curve, even if fully loaded. Despite this reaction, no bouncing is observed, and in general, the suspension is very gentle.

Blockquote>The ability of the fastening bolts to withstand high loads is confirmed by special tests conducted by experts.

Advanced properties. The standard set of systems includes ABS and PBS. An optional on-board computer can also be installed, which allows you to monitor the operation of all mechanisms and control fuel consumption.

The main advantage of MAZ-6516 is that it is easy to operate and maintain. It is easy to maneuver behind the wheel of this machine, even when the body is fully loaded. The driver’s seat is equipped with all the necessary equipment and devices. The ergonomics of the cab’s interior allows for maximum concentration on the road and no distractions. Not only do the four axles provide increased payload, but the frame structure is also designed to provide increased payload. The longitudinal spar in spar helps the load-bearing part to handle loads with confidence.

Easy maneuvering is provided by the hydraulic booster, which is produced in Minsk.

Minuses of the vehicle are defects in the cab. Outside, the presence of any protection is minimized. The headlamps also do not have shields, which is dangerous for them when driving on gravel or in conditions such as quarrying. In the cabin, although the multifunctional dashboard is striking, but still very outdated. Frankly speaking, the internal design in this truck is far from modern for several decades.

To sum up, MAZ-6516 can be called a vehicle worthy of representing not only its own country, but also the whole union of countries working on its production. The truck is able to compete with European brothers in the class of MAN and Mercedes. Even despite a number of shortcomings, the truck continues to prove that the Belarusian manufacturer aims for better performance. 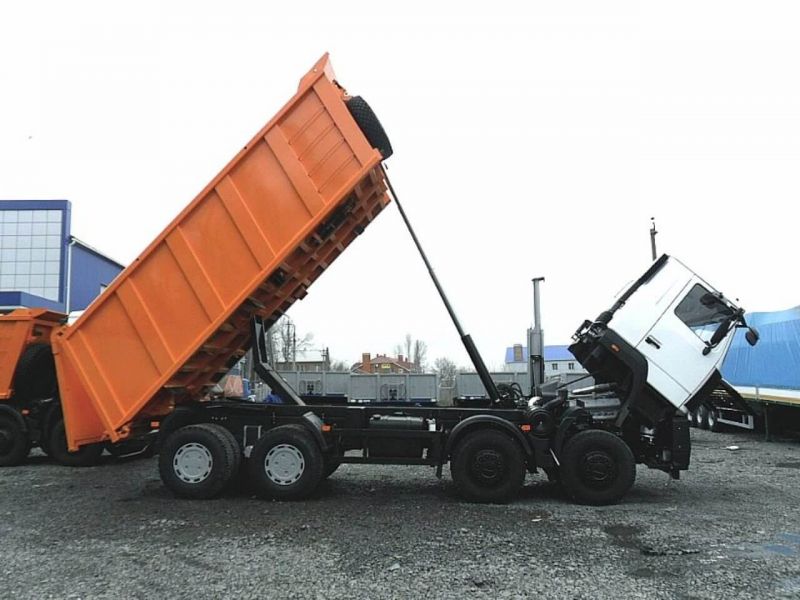 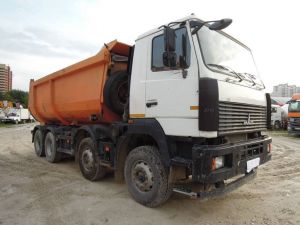 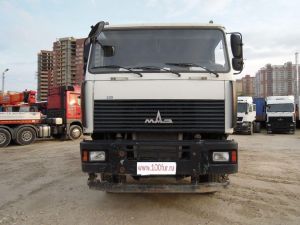 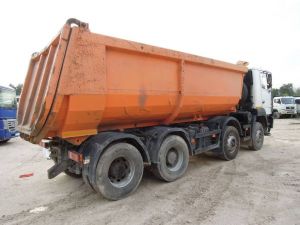 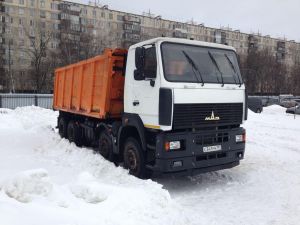 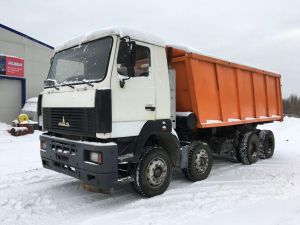 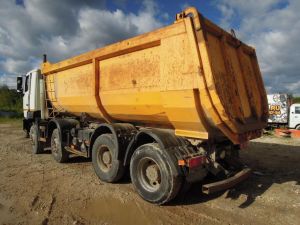 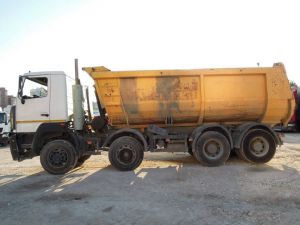 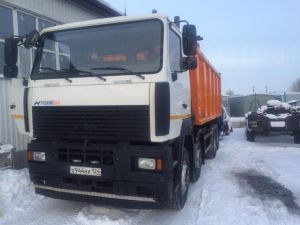 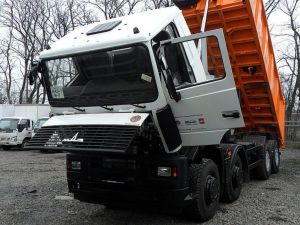