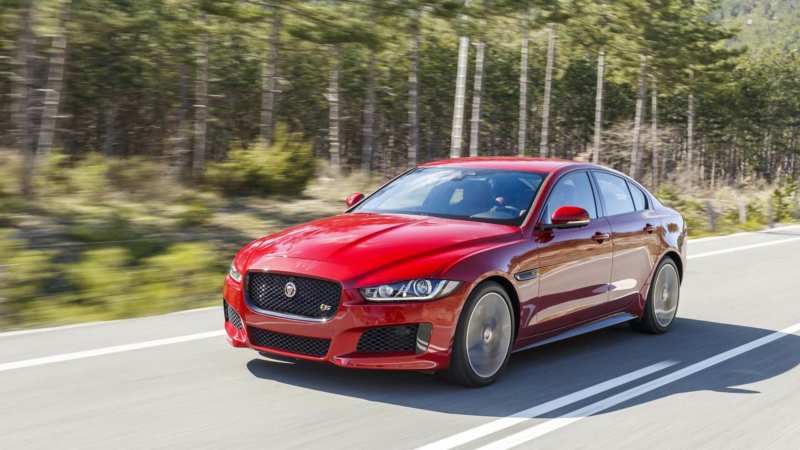 On the night of the 8th to 9th of September in the capital of Great Britain there was a demonstration of a new sedan Jaguar XE, which took a niche in the line of the English car manufacturer, a little lower than the car XF. The whole world could see the novelty in autumn in the car showroom in Paris. Jaguar became a Class D sports sedan.

Interestingly, his demonstration was very unusual, first the car was rolled on a helicopter over London, placed on a special platform, and then transferred to a ship and rode on the Thames. That is how the vehicle was delivered to the exhibition centre. The whole model range is Jaguar.

Jaguar’s Design Director, Ian Callum, was fully responsible for the appearance of the machine. For him, the task was to design a Sedan version, which is almost closely resembled a F-Type coupe machine. Looking at the photos and videos, you can see that he did his job well, and very well. As a result, the car boasts a long hood, which was slightly moved backwards by the interior and a compact back. Speaking in general, the appearance of Jaguar XE 2016-2017 was quite pleasant.

There is stylishness, sporty, assertiveness, modernity and sometimes even boldness. These are just a few examples of how you can characterize this car sedan version. The nose part acquired the presence of small, narrowed headlights with LED running lights, which were made in the form of boomerangs. 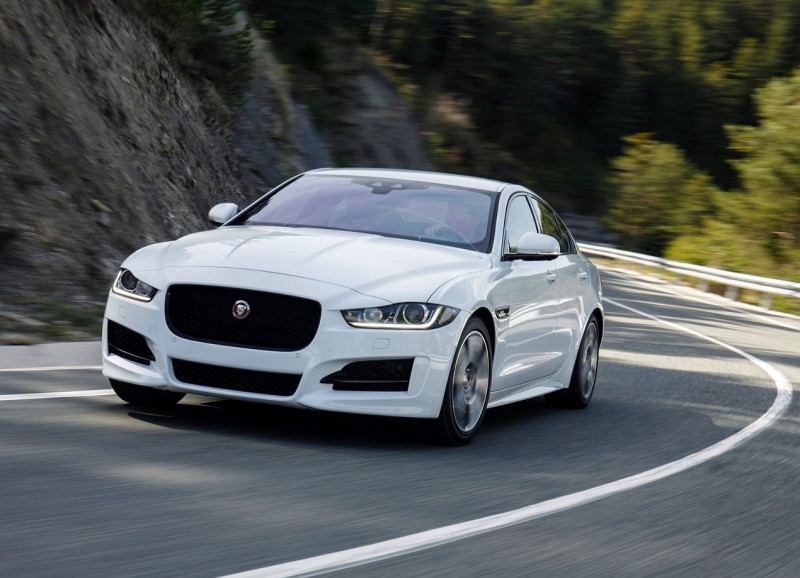 The grille of the false radiator was made in the traditional styles of the company, and the fairing, installed in front, received air ducts and a number of aerodynamic elements. Very nice and elegant it was possible to make air ducts on the sides, in the center and the radiator grille. The latter has the shape of an inverted trapezoidal grille with slightly rounded edges. Add assertiveness to the car and a little bit of brutality, the presence of the low line of sloping roofs, the presence of low skirts and a strict squint of narrow and slightly slanted headlights.

The side of the British sedan is clearly visible, thanks to the long hood and a small back part. Moreover, the side of the Jaguar XE 2016-2017 received massive wheel arches, which can easily accommodate at least large 22-inch wheels. You can also see the stylish window frame and dome roof. It is not superfluous to notice that the car will be to the taste of those who sit in front, partly because of the structural structure of the roof and the offset cabin to the back, as well as insufficient opening of the rear doors. 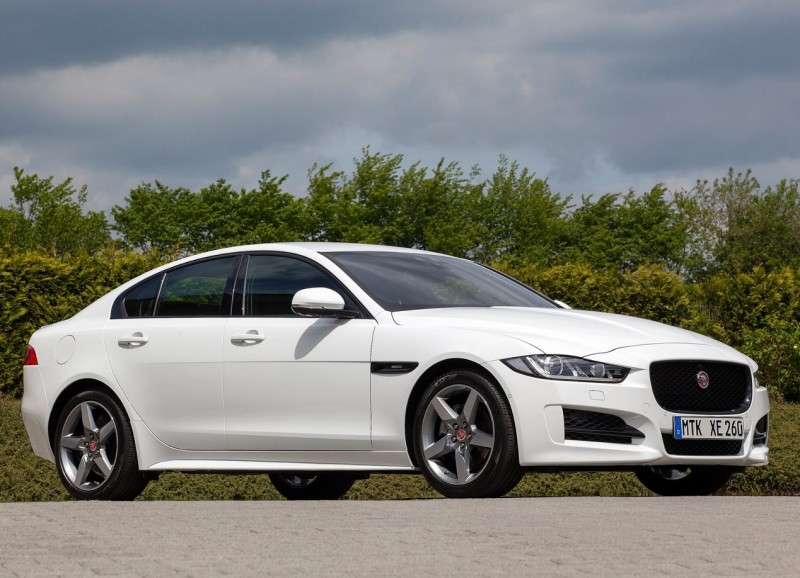 The stern of the British man received large headlights, which were created with LED filling and a small, but elegant luggage compartment lid, which is complemented by a modest spoiler. There is also a bumper, which is filled with different elements of aerodynamics. In addition, the diffuser built into the rear bumper and modern, sports nozzles on the pipes of the exhaust system are very pleased. By the way, the exhaust system has two pipes, and the lower part of the bumper was slightly cut, which gave the car swiftness and even sporty.

It will not be superfluous to notice that on increase of aerodynamics of a body of a new sedan, the English experts worked much and persistently that as a result has allowed to reach factor of frontal aerodynamic drag 0.26 Сх. In addition to the diffuser and front side air intakes, which properly distribute the air flow, special panels were installed at the bottom of the car, which simplify the movement of air under the car and prevent the appearance of whirlwinds.

Although the interior of the Jaguar CE has a 5-seater interior, there are only two cushions on the back row. Moreover, because of the high floor tunnel, the passenger sitting in the middle of the cabin will not be as comfortable as possible. Those who sit in the back row may not be able to reach the free space above the head, as, in principle, in the legs. But if to speak for a forward part of an interior the last one is more located to the driver and the front passenger sitting nearby, than back.

Free space is enough in all directions. Armchairs are quite comfortable and comfortable, in addition, anatomical people and side rollers are provided. The seats themselves have a rather low fit, as if in a sports car. The driver is presented a multifunctional steering wheel, information and stylish devices, as well as good visibility. 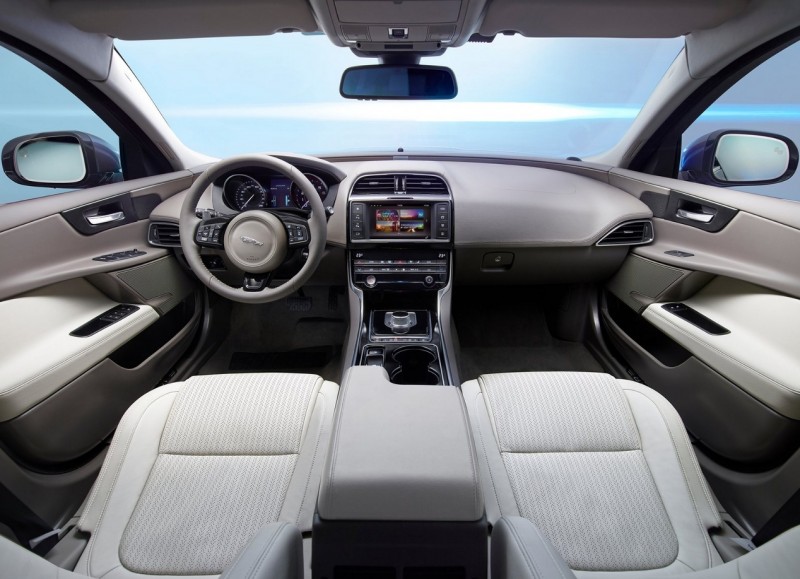 The central panel has a modern multimedia system with a colour display that supports touch-screen input and a push-button climate control system. Due to the elevation of the floor tunnel, the front of the cabin is divided into two cockpits. There are also wide armrests, automatic transmission, buttons for manual braking and control of auxiliary options of the machine. Speaking for the interior, the Jaguar CE has a quality finish of leather, suede and aluminum.

Everything was carried out quite stylishly and uniquely. It is important that the multimedia system can work together with devices that support Android and iOS. It is nice that the hands of the driver and the front passenger sitting next to each other do not intersect with each other. In general, if not to speak behind a back row, the salon has left excellent. 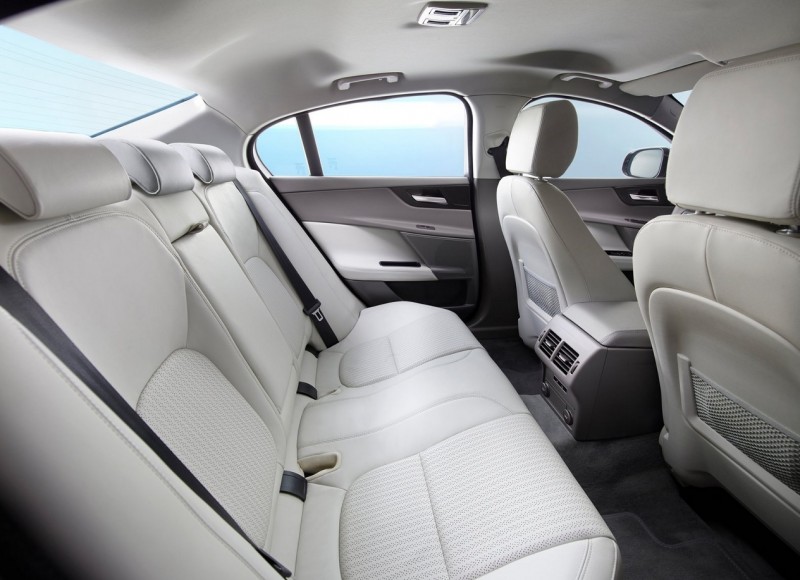 Another disadvantage for the backseat passengers is that there is a small doorway that may cause discomfort when boarding. However, this partly compensates for their ability to open at an angle of 80 degrees. The luggage compartment does not have a record volume, but has 455 litres of usable space. However, if necessary, this luggage compartment can be enlarged, while adding backrests of rear seats, which will significantly increase the space for luggage. It is worth noting that as a separate option you can buy a servo drive, which will open the luggage compartment door.

The list of British sedan powertrains is quite extensive. Initially, it is worth noting that the new car will be equipped with a four-cylinder diesel engine, volume 2.0 liters with a turbine AJ200D from the new unit Ingenium, which is able to produce 163 horses. Consumption of this novelty is about 4.1 liters per 100 km in combined mode. Then there is a more powerful variation of the same engine, which produces 180 horsepower. A little later, the bi-turbo version of the engine will take its place, the data on which are still classified.

The list of engines that operate on gasoline starts with a four-cylinder engine, the volume of 2.0 liters with a turbine, which can produce 200 or 240 horses, depending on the degree of forcing. The most popular variant of the engine is the familiar F-Type and XJ six-cylinder gasoline compressor engine with a V-branch configuration. It is capable of producing about 340 horses. If a similar engine is installed in the Jaguar XE 2016-2017, it will be able to reach the first hundred in 5.1 seconds. 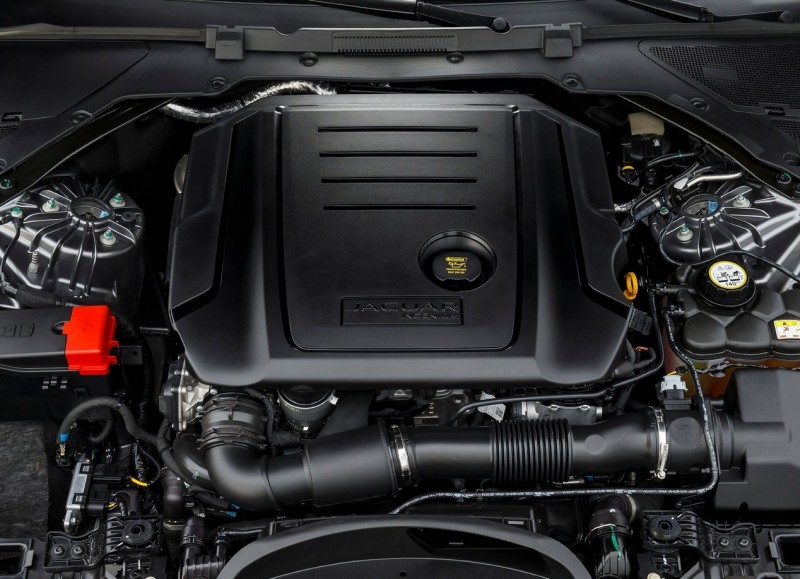 The speed limit is 250 km/h. It consumes about 8.3 liters per 100 kilometers. Synchronized operation of engines with 8-speed automatic gearbox ZF 8HP45. It is also worth adding that two-liter engines will be able to function together with 6-speed manual transmission.

For the European automotive market, the new Jaguar XE was launched in the spring of 2015. The minimum price for a British sports sedan of basic equipment starts at $34652,52. 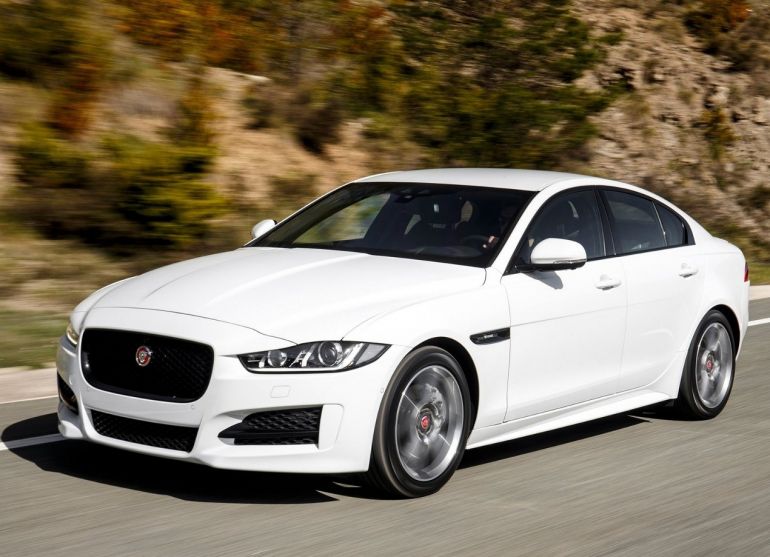 Diesel version of the Jaguar XE 2016 will be estimated from $36557,54, version R-Sport – from $42713,44. Topic equipment with a 3.0-liter 340 hp engine costs from $57008,99. Total equipment 5. The first one is Pure, where there is ABS, course stability system, front and side airbags (also curtain), air conditioner with climate control, on-board computer, fully customizable multifunctional steering wheel, fabric interior with leather steering wheel, conventional audio system, central lock and others. Next comes the Prestige, where in addition to the presence of xenon headlights, rain sensor, leather interior, heated steering wheel, front and rear parktronic, active power steering, and more. 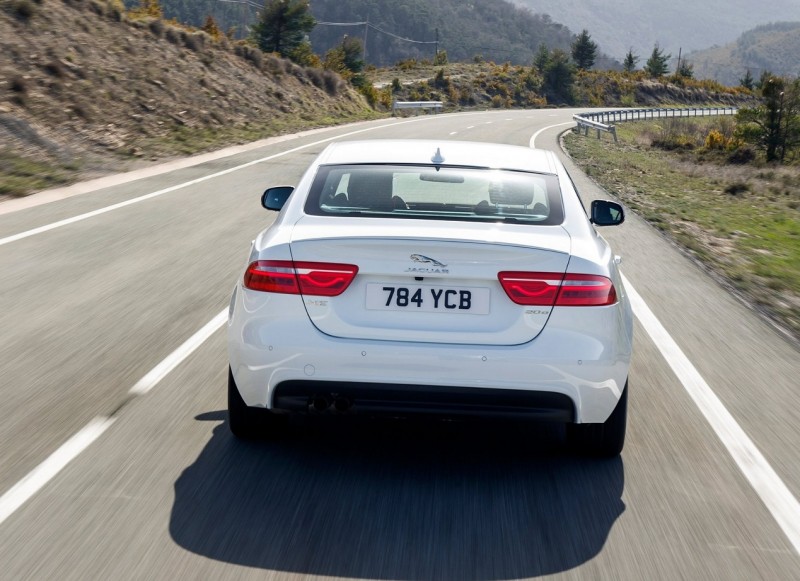 The R-Sport package will have a combined cabin, sports seats and 18-inch rims. Leather trim can be ordered at an additional cost, which can be fitted with 1 inch larger wheels. If you buy a Jaguar XE 2016-2017 with Portfolio, you will also have a leather interior, electrically adjustable front seats with position memory, a standard navigation system and voice control for some options. The top-of-the-range S comes with a V6 engine, as well as electrically powered sports seats with memory position, black fabric ceiling trim and aluminium pedal pads, but the basic navigation system will only be available at a fraction of the cost.

The release of the British sedan Jaguar XE 2016-2017 has turned out to be really great and successful. This is evidenced even by its appearance, which has kept the usual lines, but still a little bit transformed. The nose part received a lens optics and LED running lights, large air intakes, which show that this car has serious intentions and rapid potential. Large wheel arches with no less massive wheel rims of the original shape simply catch the eye. Although initially it seems that the aft part has nothing special, it looks stylish, compact and has stylish lanterns, as well as a couple of exhaust pipes.

Everything inside is made qualitatively, from expensive and qualitative materials. Everything is in its place and convenient. There is a touch screen color display. The front seats are very comfortable and have good side support. At the back, the situation is a little worse, because there, two people will fit with comfort, and that which will not have high growth as, will feel discomfort from a low ceiling. 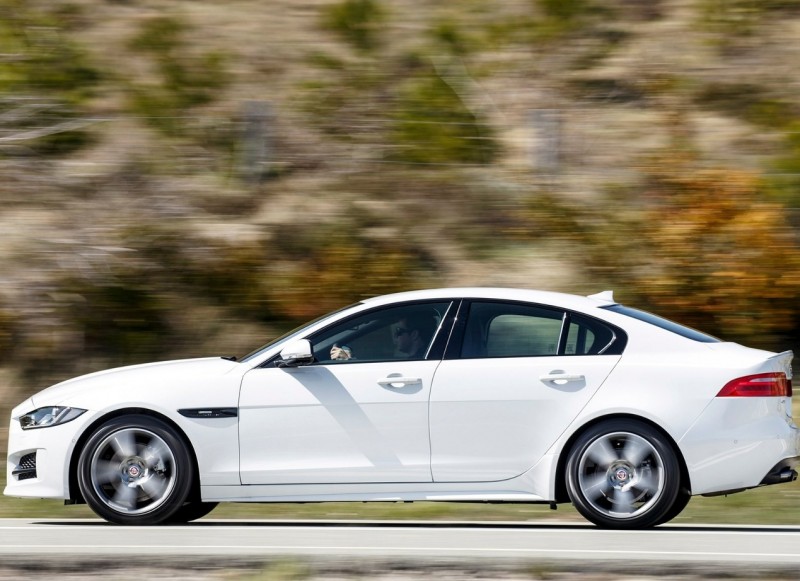 The third one can sit down, but he’ll be uncomfortable, given that there’s a tunnel under his feet. The rear luggage compartment has not a record volume, but quite a good space, which, if necessary, can be increased, while adding up the backrests of the seats. There are various assistants who help the driver to drive the car.

You can choose a suitable engine from the range of engines, which are very powerful and not very voracious. The British have not forgotten about the safety of not only the driver, but also the passenger sitting next door. Also very pleased with the good equipment of the car, even in the basic equipment. British brand Jaguar always pleases with its quality and potential, and the new Jaguar XE 2016-2017 only proves it.

We advise you to read the article: History of Jaguar Cars 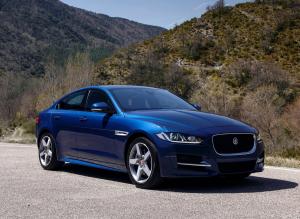 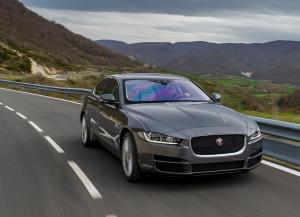 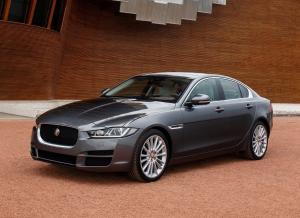 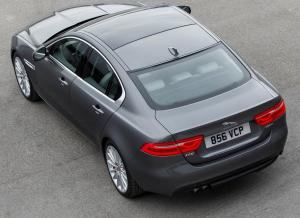 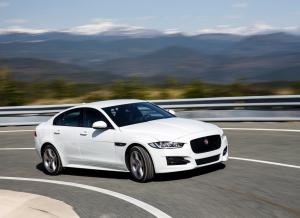 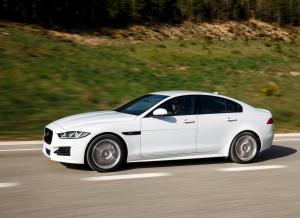 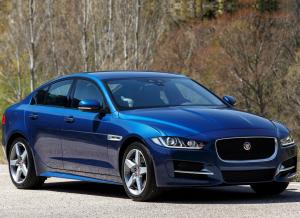 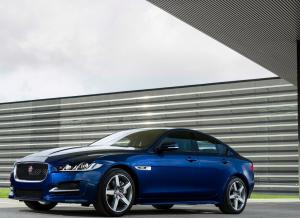 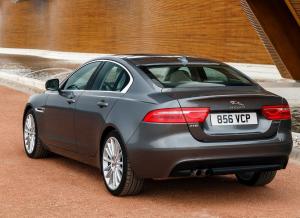