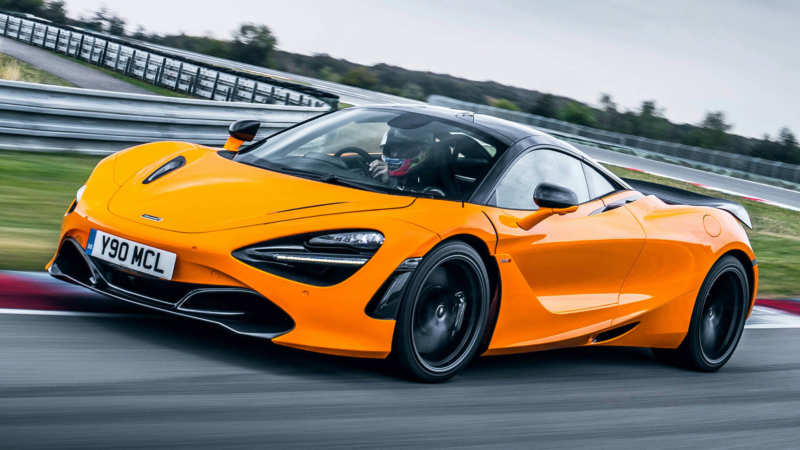 The McLaren 720S with the in-house index P14 is a sports car of the Super Series family. The car has a mid-engine layout of the British manufacturer McLaren. The novelty was produced as a replacement for the McLaren 650S. The British supercar was presented during the Geneva Motor Show on March 7, 2017. Already in April 2018, the company introduced an open version of the McLaren 720S Spider. The whole model range is McLaren.

According to the design team of the British company, the novelty had completely new details and body features. Nowhere was there a hint of any of the company’s cars. In fact, the specialists managed to create the original appearance of the McLaren 720S, applying the latest, modern technology. At the same time, the appearance of McLaren 720S turned out recognizable and not similar even to other cars.

The newest optics on a black background with LED filling immediately catches the eye. It received an unusual shape, as well as is divided into two separate parts. Below you can see the LED running lights of horizontal type, and on top – the optics itself, which already in the basic version has an adaptive system, which is very necessary at high speeds. In general, the appearance of the McLaren 720S is simply gorgeous, it is difficult to describe it briefly. It is difficult not to notice such car on the road. 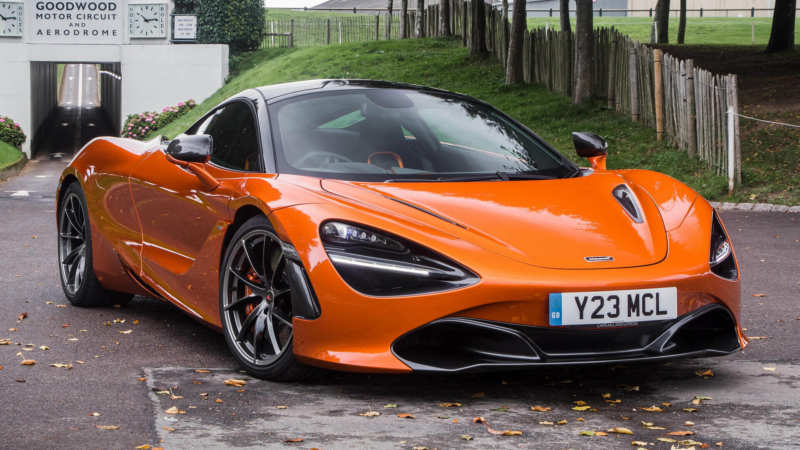 The front bumper has a slightly different appearance from the rest of the British sports car, but the design team managed to keep the traditional McLaren elements. The frontal area is highlighted by a sharp shape as well as a tightened side part. It turns out that the front optics are integrated into the front bumper. At the bottom of the bumper there is an insert of black color, which has two directional holes for better streamlining.

The aerodynamic inserts can be made of fiberglass or carbon fiber, depending on which option is chosen. On the side of the bumper McLaren 720S there are compact aerodynamic recesses, having turn signalers above them. Up front, it’s just hard not to notice the trunk lid. There’s no caveat here, because the engine itself in the McLaren 720S is housed in the fillet of the coupe.

As for the lid itself, it looks like a traditional hood, has two holes for improved streamlining. At the front, specialists have placed brand logo, and to be more exact – the inscription. Nearby is placed an aerodynamic contour, stretching from the front end and to the air intakes of the power plant. This circuit in the car is necessary in order to direct the air flow into the engine and for improved aerodynamics McLaren 720S Spider. 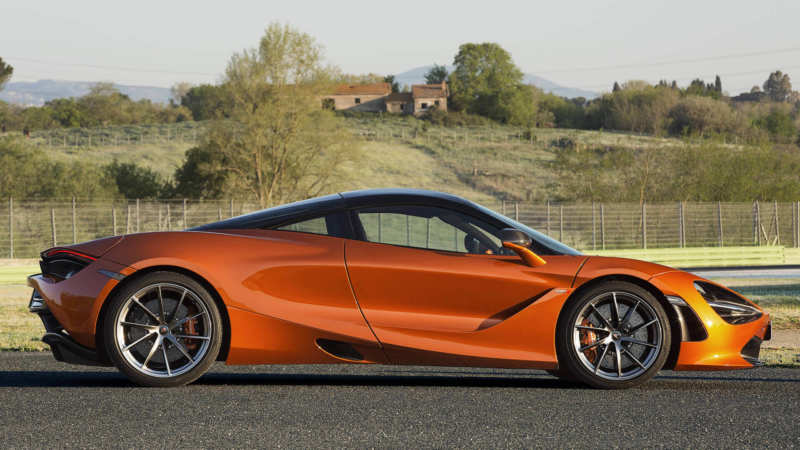 From the side, the sports car also looks very interesting. The doors have an unusual shape, as well as in general their way of opening. At the front there is a place for the side mirrors, installed on a special foot-stand, which are often painted black, but there is a package of additions, which allows you to paint the bodies of the external mirrors under the color of the body. The door handle decided to hide in an aerodynamic contour, which from the beginning is quite difficult to notice.

In the lower part of the doors placed a notch with air guides, which is also very necessary for the excellent aerodynamic characteristics of the sports car McLaren 720S. The doors themselves open in a very unusual way. Here, the engineers along with the design team decided to combine Lambo doors technology with “gull wings”. It turns out that the doors open forward at an angle of 45 degrees. 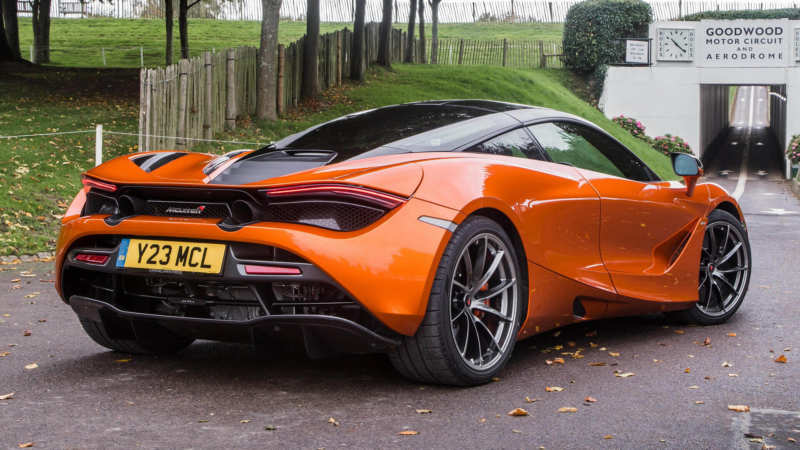 The height of the ground clearance was only 97 millimeters. The car is supported by 19-inch front and 20-inch rear titanium wheels with a stylish appearance. This has improved the stability and handling of the sports model. The rear helps make it even clearer which brand the car belongs to. Some see something similar to the P1 model, but here everything looks more modern. As for the taillights, they are narrow, but fit perfectly into the overall look of the McLaren 720S.

Near them there is a place for two huge exhaust pipes, from which comes out a beautiful, volumetric sound. In addition to this, the rear of the British sports car is equipped with reflectors, as well as retractable large spoiler with built-in brake light repeaters. The latter works in automatic mode.

Depending on the speed mode, it can either go down or up, which has a positive effect on handling and aerodynamics. In general, the aerodynamics of the novelty is thought out so that it is possible to cool the power unit as much as possible. Not so much space was dedicated to the rear bumper. The lion’s share is taken by a massive diffuser with an open part to cool the “engine”.

Inside you initially get the feeling that everything looks simple, but in reality there are a lot of interesting things here. The designers did not spare the leather, which can be found on the seats, dashboard and doors. Moreover, a lot of elements are covered with high-quality alcantara. The driver and passenger are placed on sport type seats, which have rigid side support and 3-point safety belts.

Of course, the side support perfectly holds the torso during a sharp turn, leaving it in place. Thereby the driver is not distracted from the road. Interestingly, the sills here are quite wide, which has an excellent effect on the high level of safety. The most attractive part of the McLaren 720S Spider’s interior is the Folding Driver Display, which boasts an eight-inch color touchscreen. It displays a large amount of data about the car. 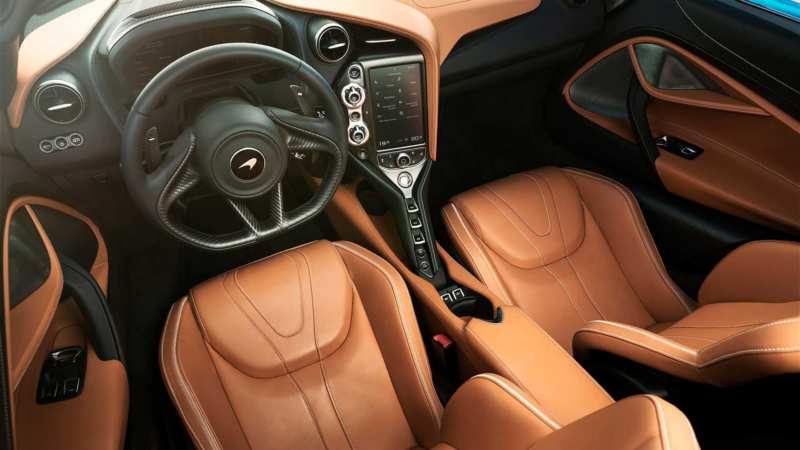 In front of the driver there is a 3-spoke steering column made of alcantara and carbon fiber. In the middle there is a place for the brand nameplate, which is also a sound signal. The “steering wheel” itself turned out very comfortable, mainly for sporty driving. There are no gearshift paddles, as well as levers to adjust the suspension. There are no different buttons on the steering wheel, because they are not needed.

It is interesting that during the activation of the sport mode the dashboard flips 180 degrees and moves away a little from the driver. Thus the driver sees a small display showing information about engine revolutions, current speed mode. At the same time it increases the quality of the view. However, even in normal mode, you can unfold this display using the key next to the “dashboard”. 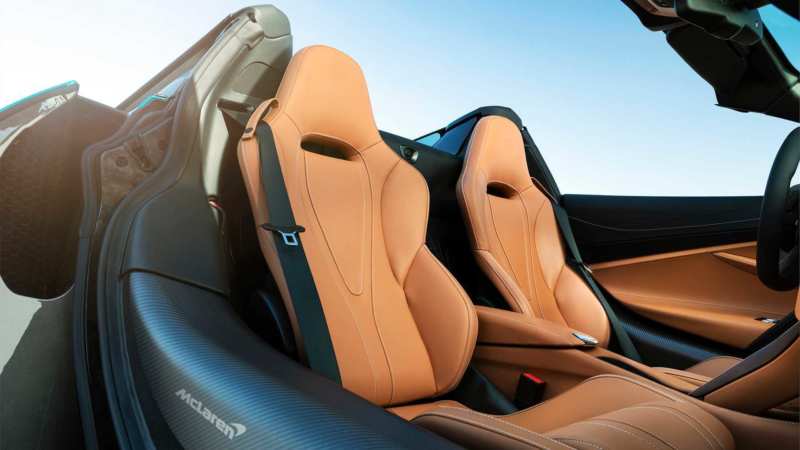 To prevent the entertainment center’s screen from reflecting off the sun, a bent leather protector was installed next to it. The rectangular screen itself is quite handy. It allows adjusting the separate climate system. On the right side there is a place for round selectors to control driving modes. Under them, there are three keys to control the transmission.

Interestingly, British engineers even installed a heated cupholder. In addition, McLaren 720S boasts two luggage compartments in the front rear. Clearly, their volume can hardly be called large, but the fact that they are there is already good. The front luggage compartment has 150 liters and the rear one has 210 liters of useful volume. The most necessary things can be placed without any problems.

Powered by a single 4.0-liter twin-turbo eight-cylinder V-shaped powerplant housed behind the seats, it generates 720 horsepower (770 Nm). This engine is a reworked version of the previous 3.8-liter 8-cylinder engine. However, it has 41 percent new components.

The SSG twin-clutch seven-speed robotised gearbox transmits all torque to the rear wheels from the powerful engine. It allows the supercar to reach 100 kilometers per hour in 2.9 seconds. The second hundred is reached in 7.6 seconds and the third in 21.4 seconds. The top speed limit is 341 km/h. The car needs 10.3 seconds to cover the 402m drag race distance.

As the base for the new McLaren 720S, engineers decided to use the latest Monocage II carbon fiber monocoque with a carbon fiber chassis. All body panels are made of aluminum. The car has received an adaptive suspension Proactive Chassis Control 2, which has a drift mode. Such a chassis is a little better than in past models, but the feeling of improved handling is much better.

On top of that, the supercar is equipped with electrohydraulic power steering, as well as carbon-ceramic brakes. To stop completely at 200 and 100 kilometers per hour, you need 4.6 and 2.8 seconds respectively. Additionally, the braking system has been “taught” to analyze the behavior of the vehicle while driving on the track. It is able to automatically brake some of the wheels sometimes. 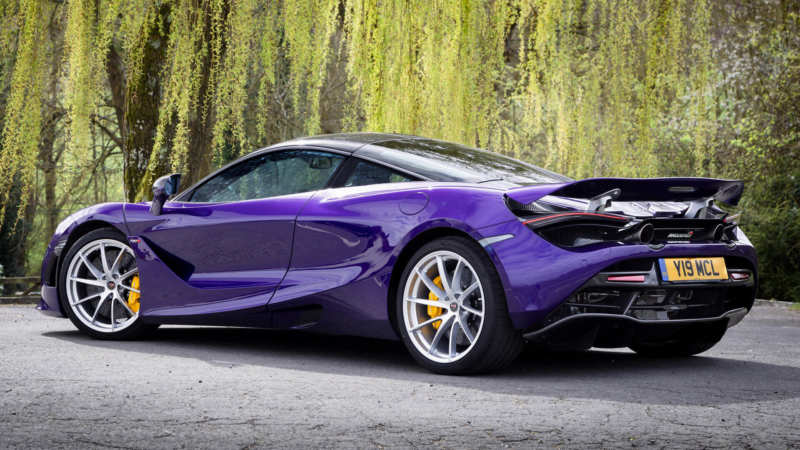 Separately, we should highlight the racing version of the “regular” model McLaren 720S GT3, which is built on the platform of the simple version 720S. It differs in appearance, focused on the racing theme. The technical part was also redesigned to achieve better results. The car also had to be lightened in order to meet the racing requirements.

Given the speed capabilities of the British supercar, the group of engineers simply could not ignore the safety systems. Already in the starting version, the coupe boasts front airbags, side curtains and airbags, a central airbag between the seats. Additional airbag is in the area of the driver’s knees. The list of active safety systems has:

The company has provided several configurations McLaren 720S: standard, Luxury and Performance. They differ from each other by exterior, internal equipment, but differences in technical characteristics are not provided. The McLaren 720S price starts at $289,000. Other variants are priced higher.

There is a variant of the McLaren 720S MSO Velocity, which is distinguished by the possibility of personalizing the paint of the vehicle. For this you have to pay about 335,000 pounds. Such cars have already sold more than 400 copies. By the end of 2017, the British were able to produce 1,200 cars. 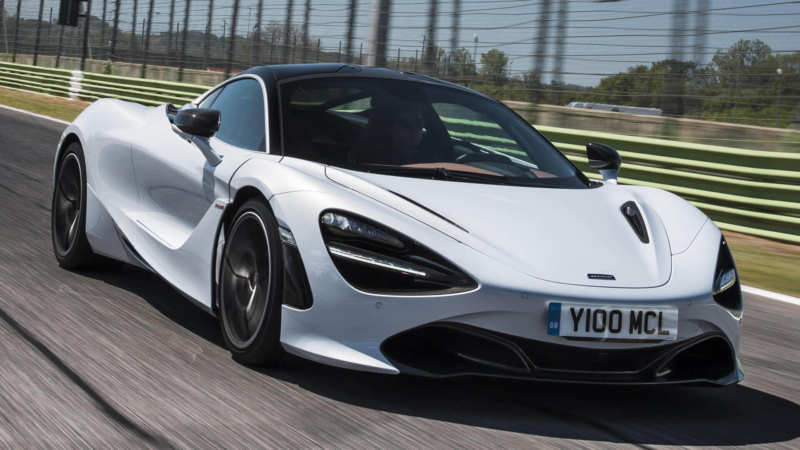 In this expensive sports niche, the McLaren 720S is competed by the Ferrari 488 GT, Lamborghini Huracan, Bugatti Chiron and Aston Martin Vanquish.

Concluding our review of the McLaren 720S, you realize that the company’s engineers managed to make a successful replacement for the 600-series. The car stands out with a newer exterior, which corresponds to the current fashion trends. The body has received excellent streamlining, which allows it to be one of the fastest cars in the whole world. Inside, it is very comfortable to sit comfortably. Despite the fact that it is a sports model, it is not deprived of entertainment system, which here got a color display.

Due to a small ground clearance, the “British” perfectly holds the road, confidently takes turns even at high speeds. Dynamism is achieved due to the improved power unit. However, to understand and feel all this, it is necessary to be convinced of advantages of the given car personally! Judging by the reviews of McLaren 720S owners, the British turned out a sports car just great. It is created for fast driving. 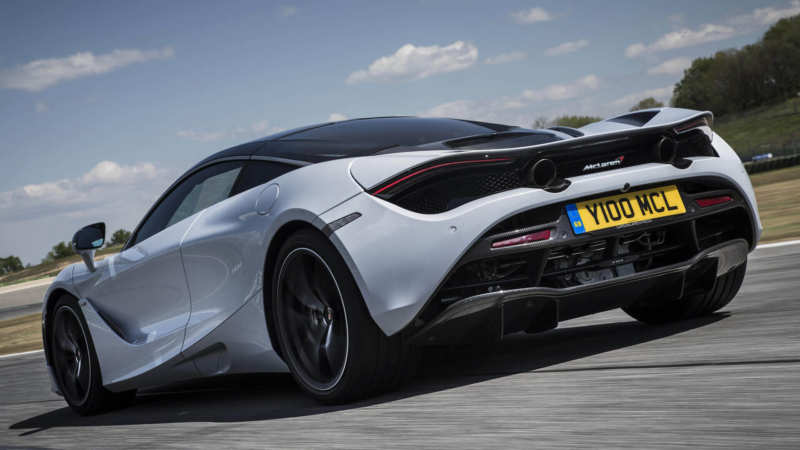 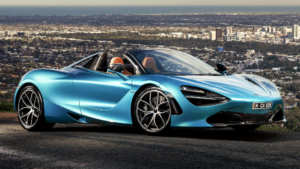 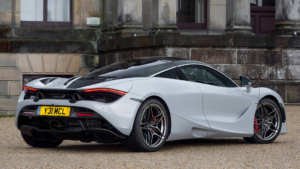 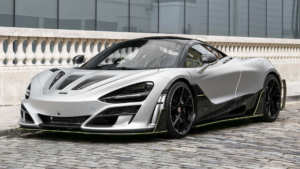 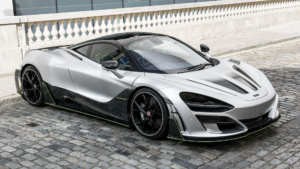 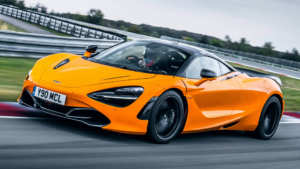 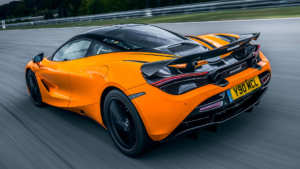 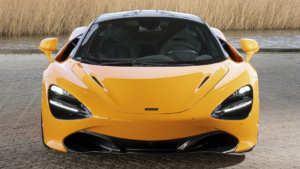 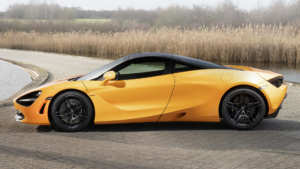 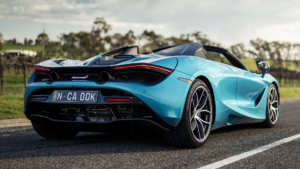