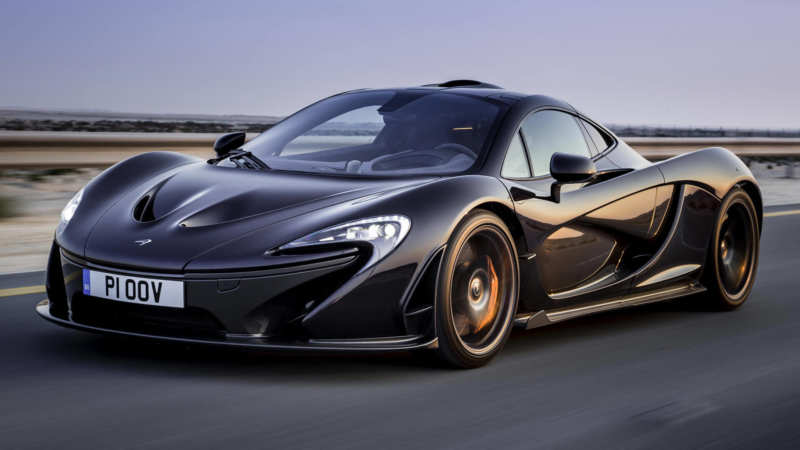 The McLaren P1 is a British hypercar from McLaren Automotive that has a hybrid powertrain. The car is intended to replace the famous model McLaren F1. The first data about the novelty appeared in October 2011, during the testing of the car. In September 2012, during the Paris Auto Show introduced a concept version, dubbed the “P1”.

Already in January 2013, the new McLaren P1 was shown during a private presentation in Beverly Hills. The world premiere of the British hypercar was held during the Geneva Motor Show in October 2013. The whole model range is McLaren.

The exterior of the McLaren P1 is simply chic, the coupe looks really stunning. The front part is equipped with two huge recesses, but the most attractive thing here is the optics. “The British has beautiful LED headlights, made in the form of a company logo. Under them there is a place for air intakes, stylishly combined with the headlights.

The supercar has active aerodynamic elements in the nose area. The central part of the hood boasts two holes for ventilation, and there is an additional air intake on the roof, designed to supply air inside the vehicle. The side of the car also got a lot of aerodynamic elements. Side mirrors decided to install on a massive leg. 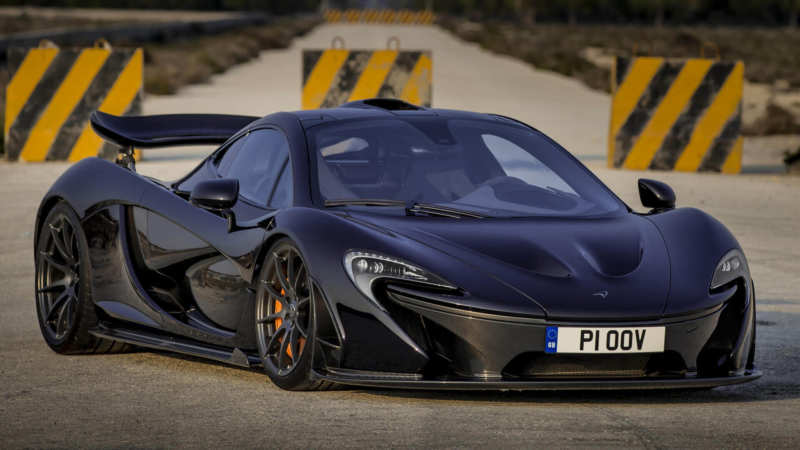 The body directly received an aerodynamic drag coefficient of 0.34, which had a positive effect on the aerodynamic efficiency. Judging by the assurances of experts, during high speed the car has a downforce of about 600 kilograms, which is 5 times higher than the indicator of the MP4-12C version. Many people call the stern a work of art. The engineers were able to decorate the rear part with a thin LED line, encircling the whole form of the body.

Also specialists have provided a spoiler, painted in the color of the body, designed for sporty driving. It rises when reaching a certain speed and changes the height and angle of attack. In the very center there is a single exhaust pipe, but it is massive and mounted below the spoiler. Two powerful diffusers finish the rear part.

The interior looks minimalistic. It was decided to use carbon fiber as a finishing material. However, the bucket-shaped racing seats are equipped with a titanium frame and upholstery made of alcantara. The instrument panel also does not have traditional dials. In their place are three displays, showing all the data about the speed mode, engine speed and other things. 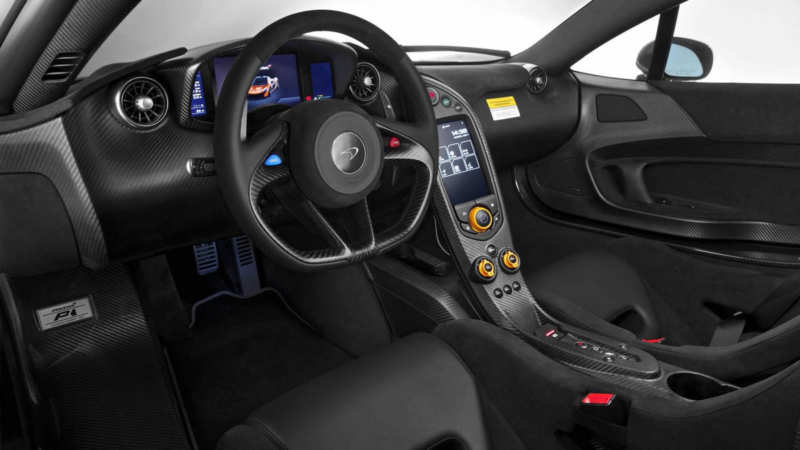 The driver steers with the D-shaped, massive steering wheel. It has paddles, the shape of which resembles a tablespoon. They are needed for gear shifting. The steering wheel itself is covered with alcantara and inserts made of carbon. You will be surprised, but the British hypercar is the car of “one owner”. All because the settings of a driver’s seat are set individually at a factory.

To change it, it is necessary to get into the salon of the official representative of McLaren. There are only 2 seats inside, while F1 model has three such seats. The central console boasts a massive touchscreen display and a small number of mechanical buttons. The screen allows you to adjust the climate system or work with the navigation system. The creators of this car sought to make everything inside in such a way that the owner feels like a fighter pilot.

Many will be interested in the characteristics of the McLaren P1, which is quite logical. The novelty received two motors. The traditional gasoline engine received a V-shaped structure and working volume of 3.8 liters. He has eight cylinders and two turbines. As a result, it generates 737 horsepower. This “engine” has proved itself well on the model McLaren MP4-12C. This is the first power plant of its own design, since before they used engines from Porsche and BMW. Fuel consumption is 8.3 liters per 100 kilometers.

Interestingly, the McLaren P1 engine weighs about 200 kg, and the batteries weigh 96 kg.

In the rear, there is space for the batteries, which power an additional electric motor. A full charge should be enough for 10 km of travel. The electric motor has a system that recharges it. To charge the batteries it takes 2 hours at a household socket or 10 minutes at a special station.

This motor generates 176 horsepower (260 Nm), which together with the engine gives 916 “horses” (900 Nm). The electric motor has the KERS system, which engages the flywheel during braking, generating a charge transferred to the two traction batteries.

This power is transmitted to the rear wheels by a seven-speed Graziano robotized gearbox with two clutches. The car accelerates to 100 km/h already in 2.8 s. The second hundred conquers in 6.8 seconds, and the third – in 16.5 seconds.

The speed limit is limited at 350 kilometers per hour, although the engine can accelerate up to 390 kilometers per hour. There are 3 different modes of operation: Race, Sport and Normal. Each of these modes has its own settings of suspension, steering, control system and power unit operation.

Thanks to the Instant Power Assist option, the owner can get an instant boost of 179 horsepower at the touch of a button. 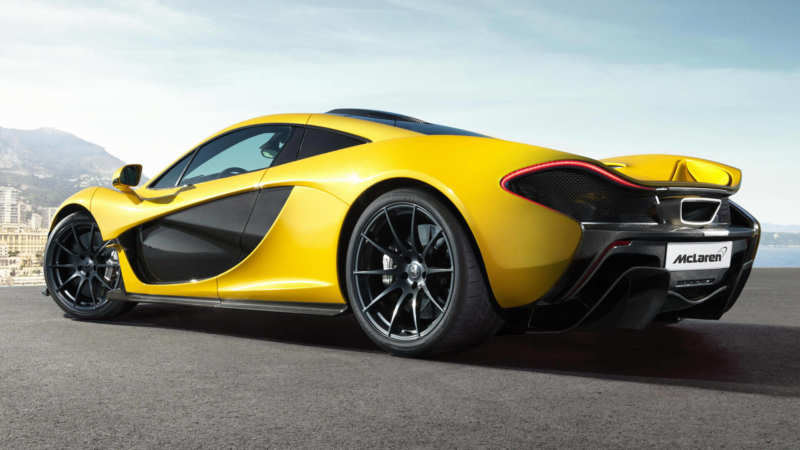 For the base the engineers decided to use a body made of carbon fiber MonoCage, which mass does not exceed 100 kilograms. Because of this there is no noise isolation – everything went to reduce the weight. The lion’s share of elements was made of carbon fiber. As for the body itself, it was created on the platform of the McLaren MP4-12C. In addition, found a place for an independent suspension on the wishbone, equipped with stabilizers transverse stability to improve the passage of curves.

More suspension McLaren P1 has an active hydraulic system RaceActive Chassis Control, which allows you to change the clearance of the hypercar. Much attention was paid to the braking system too. Akebono company worked on it. It has high-performance disc brakes with carbon-ceramic “pancakes”, which are resistant to the extreme temperatures that occur during the sports coupe.

Many people are interested in the price of the McLaren P1, which when you find out, you will be surprised. The cheapest variant costs not less than $1,300,000, which is a lot. Already the basic “package” McLaren P1 got climate control, Meridian music system and navigation system. It is clear that optionally the company can improve the hypercar, which will make it more individual and expensive. In total, the company first planned to produce 500 such cars, but in reality the circulation amounted to only 375 copies.

Already on the first day there were six lucky buyers. It turns out that the version McLaren P1 was able to successfully replace its predecessor. It received a chic appearance, excellent speed indicators, which not everyone will like, and the most modern electronic stuffing, together with a hybrid power plant. 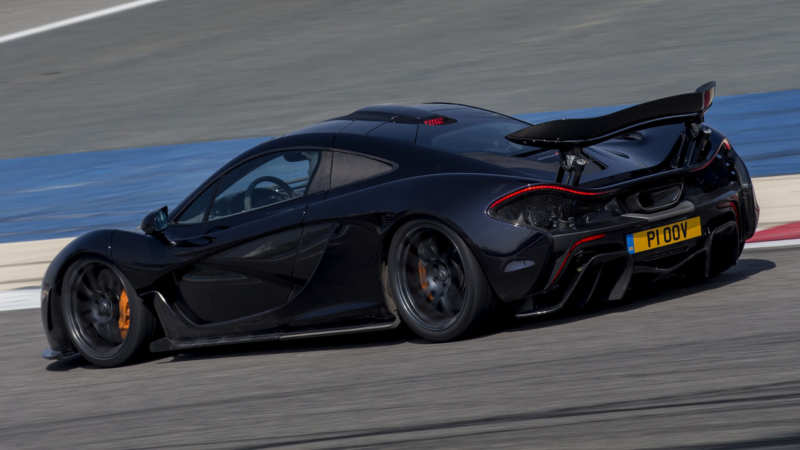 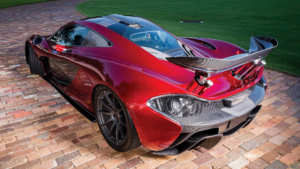 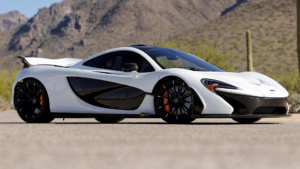 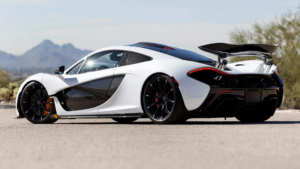 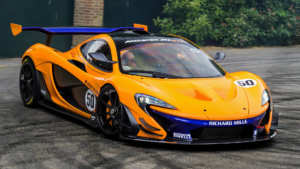 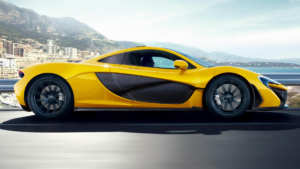 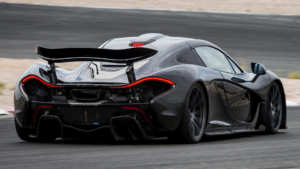 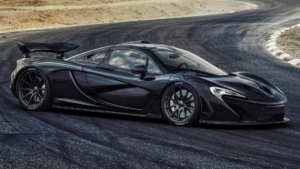 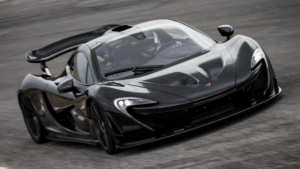 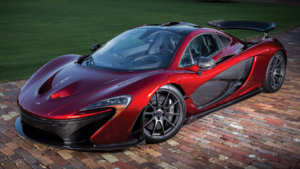