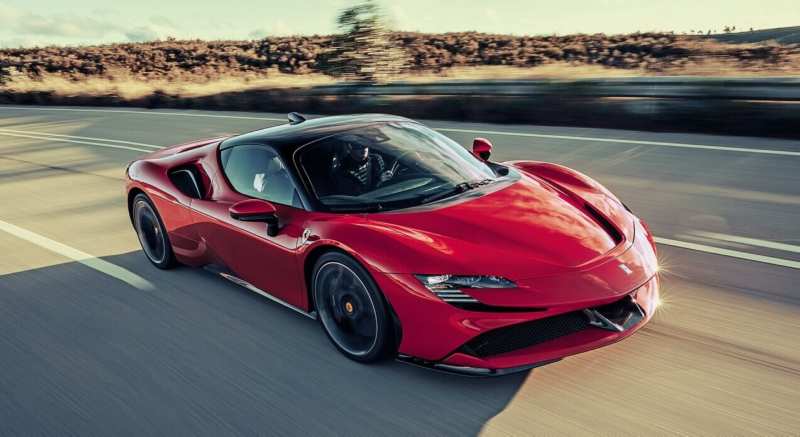 Ferrari SF90 is the first plug-in hybrid of the famous Italian brand, produced in series order, demonstrating the change of orientation of the manufacturer towards the electrification of the drivetrain to improve their performance and environmental characteristics. The new car was dedicated to the 90th anniversary of the racing team Scuderia Ferrari, which is just reflected in the name of the car. The whole model range is Ferrari.

According to the manufacturer, this is the first dramatic change in appearance in the last 20 years. In fact, the exterior of the car is a big continuation of the F8 Tributo style. Perhaps it shows a new vision of the future cars of the Italians, or maybe it is a unique style to emphasize the non-standard powertrain.

The front end of the Ferrari SF90 Stradale has smooth shapes that improve the aerodynamic performance of the sports coupe. In addition, the car boasts matrix L-shaped headlights, which together with the bottom overlay form a U-shaped shape. These overlays end with a hole, necessary for the cooling of the braking system. 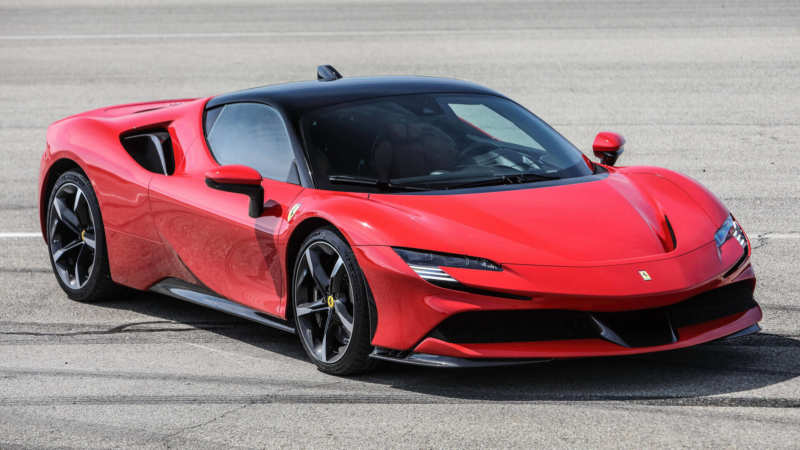 The side of the Ferrari SF90 Stradali captures the already familiar forms of the Italian company. It has large feet of exterior mirrors, massive air intakes above the rear arch with a radiator, to which the airflow is fed through the top. In the lower part, you can see the carbon fiber inserts (or skirts). Separately, it is worth noting the presence of 20-inch “rollers”, which received spiral lines. 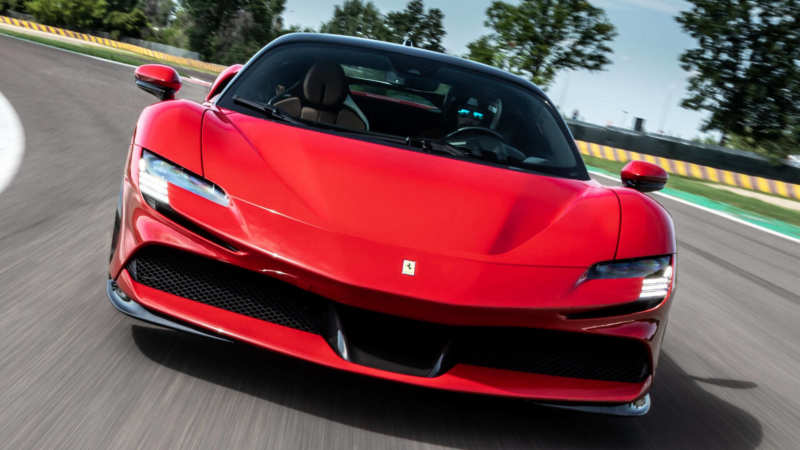 This allows air to escape from the wheel arches. The novelty stands out with compact overhangs, with the rear one being shorter than the front one, so the cab seems to be shifted forward a bit, which emphasizes the fact that the engine is located in the middle. The cabin itself is compact, has a curved windshield, thin front pillars and forms a bubble shape.

Thanks to the Italian specialists’ work on aerodynamics, they were able to achieve 390 kilograms of downforce at 250 kilometers per hour. 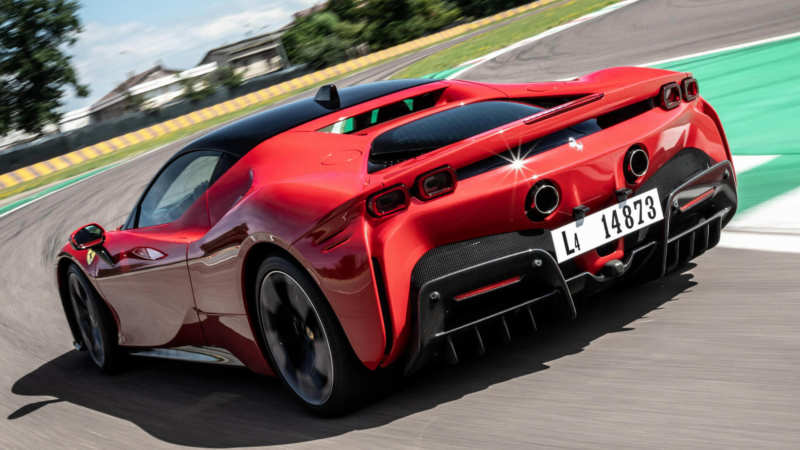 The stern of the coupe managed to keep the traditional 4 lights, but they now have an oval shape. Below them there is a place for a continuous line of spoiler and it is here you can see the work of specialists on active aerodynamics. While everyone installs a spoiler, which rises when reaching a certain speed, the Italians have equipped their model with a lowering shut-off Gurney panel, which improves downforce.

This technology is able to analyze the behavior of the vehicle, adjusting the angle of the section automatically. In the center there are massive round exhaust pipes of the exhaust system.

The interior has been seriously redesigned, but the overall structure remains the same. The main innovation is the presence of touch buttons on the steering wheel, which is in reality a rather controversial decision. The Italian company always placed a key to start the engine, a switch of driving modes and keys of turn signals on a “steering wheel”. Therefore, it is a little bit unclear why to install touch key to start the engine.

The steering wheel itself is equipped with a touchpad and a large number of sensor keys to control the multimedia unit. The entertainment center itself is conditional here, because everything, including speed and technical information, is displayed on a large 16-inch display. On the sides the navigation information and information about the car is displayed, and in the center there is a tachometer. It is mounted behind the steering wheel. To get rid of the distractions of a busy screen, the engineering team has equipped the car with a projection screen. 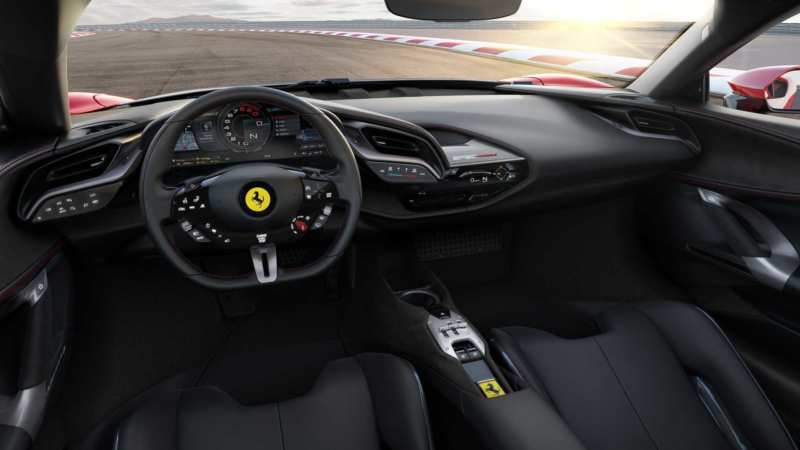 In the interior of the Ferrari SF90 engineers also installed two more touchpads on both sides of the driver. On the left side you can adjust the optics, and on the right side you can control the climate system. As for the front passenger, he was not provided his own display, as in the case of Ferrari Roma. Engineers also surprised the joystick of the gearbox. It has small switches, moving on a skid.

It is rather non-standard decision. However, there is no sense to speak about comfort, as such cars a priori can not be the most comfortable cars. About a serious sports direction is evidenced by rigid carbon-fiber buckets, having leather cushions. On the sides of the digital dashboard, the designers placed quite stylish deflectors of ventilation system. 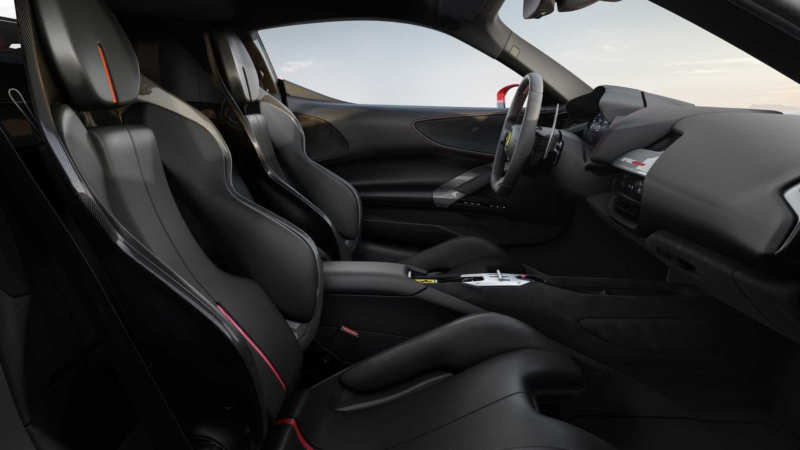 The seats of the Ferrari SF90 coupe stand out with excellent side support, but again, comfort is not the issue. The central tunnel, where in Ferrari cars the gearbox lever is usually located, has been redesigned. All controls are mounted on a metal plate.

If we talk about the technical stuffing itself, for the first time in the last 30 years, the Italian company decided to install in its flagship car a V-shaped 8-cylinder engine, coming with two turbines, instead of V12. We’re talking about the F154 powertrain, which has a 90-degree block camber. Especially for the Ferrari SF90 Stradali, this “engine” has been upgraded.

Its displacement was increased from 3.9 to 4.0 liters and cylinder diameter from 86.5 to 88 millimeters. In addition to this, the power plant had a new 350 bar direct fuel injection system, a revised cooling system, and an electronically controlled exhaust pressure relief (vestgate) valve. As a result, power has increased to 780 horsepower (800 Nm). The F8 Tributo, for example, generates 720 horsepower (770 Nm).

In this respect, the car received a new 8-speed DCT robotized gearbox with 2 clutches. The new box has become more compact and lightweight. Italians assure that due to the improvement they managed to reduce the time to shift from 300 to 200 milliseconds. It is interesting that the back gear is absent in the gearbox – the reverse is fully electric here. Moreover, the front electric motors are used for this purpose.

At the same time the internal combustion engine is deactivated in automatic mode. Despite the increased mass of the car by 270 kg (it’s all the fault of the hybrid unit), the car already for 2.5 seconds accelerates to a speed mark of 100 kilometers per hour. The 200 km/h mark is reached in 6.7 seconds. The speed limit is 340 km/h.

We can highlight the eSSC slip control technology, which is able to analyze all the information, including the engine. For the fans of “drifting” the Italians decided not to remove this feature.

If you activate the front-wheel drive mode eDrive, Ferrari SF90 can move only on electric traction, but because of the lithium-ion battery capacity of 7.9 kWh there will be no opportunity to disperse. The full battery will allow to drive only 25 kilometers, but the “maximum” will be about 135 kilometers per hour. In addition to the eDrive mode, the owner has access to Hybrid and Perfomance modes, as well as the most extreme Quality. Any of the chosen modes has its own algorithms of the hybrid system and technology recuperation.

The Italians have taken the cooling of the hybrid technology seriously. For example, in the center of the car there is a radiator which cools the electric motors and inverters. On the sides there is room for two more radiators, designed for the internal combustion engine and the gearbox.

The car is equipped with a completely new body and chassis. Both were made using carbon fiber. The chassis bending stiffness increased by 20 percent and torsional stiffness by 40 percent. The sports coupe has lowered (slightly) center of gravity. The braking system boasts high-quality carbon-ceramic brakes from the famous Brembo brand.

The front brakes are 398 millimeters, and the rear 360-millimeter brake discs are installed. As for the braking efficiency, everything is all right here – from a speed of 100 kilometers per hour the car stops already in 29.5 meters.

Rumor has it that the starting price tag will be around $461300.00. This figure is much less than the Ferrari LaFerrari. There is information that the car will be produced in a limited edition, but the Italians themselves deny these talks, which is very strange. One thing is clear – the price of the Ferrari SF90 Stradale will be a bit more expensive than the Ferrari 812 Superfast, for which they ask about 400 thousand dollars.

What can be summed up for the Ferrari SF90 2020? The car turned out to be really new, and in many respects. The Italian company was able to release a truly new vehicle for the first time in a long time. The sports coupe got a sporty, modern and at the same time elegant appearance. It also boasts excellent aerodynamics, dynamic performance and a quality braking system.

Inside, one can feel that the car has been produced for years to come. Just look at the huge 16-inch display, which allows you to display different information about the coupe. Moreover, the Italians not only upgraded the internal combustion engine, but also equipped their car with a hybrid setup, which even allows you to move only on electric traction (though not so long). 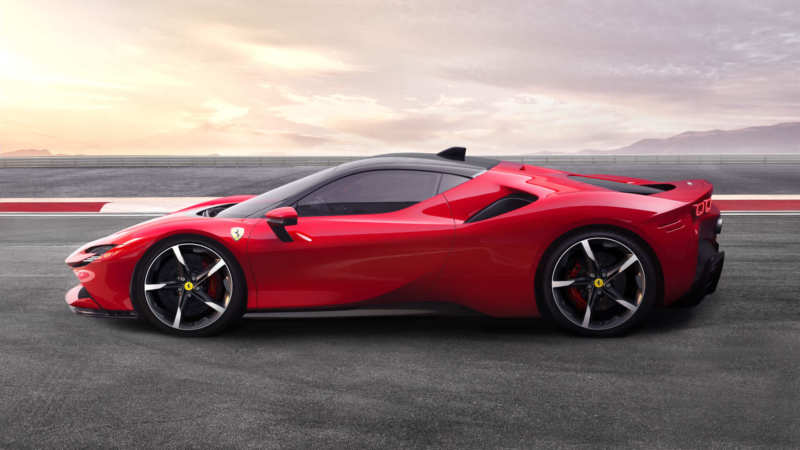 The Italians were able to make a bold and correct move. Today a lot of people argue whether electric motors are necessary in modern supercars, but the new Ferrari SF90 2020 has shown that the hybrid system is quite useful if it is used together with the internal combustion engine, rather than completely switch to it. Now it remains to be seen how the novelty will show itself in practice! 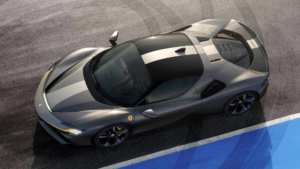 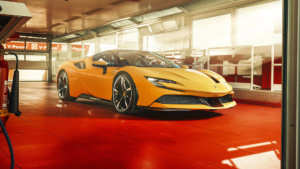 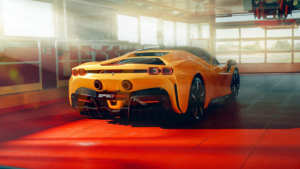 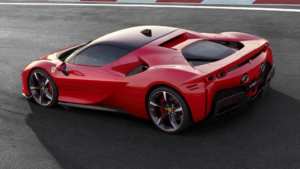 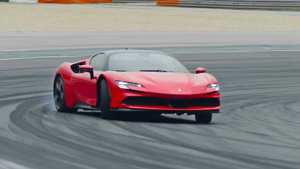 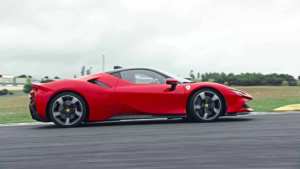 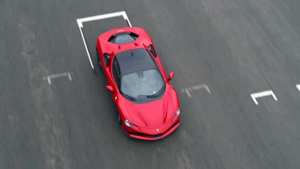 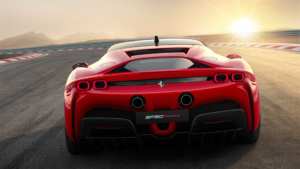 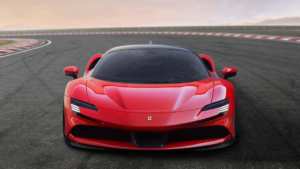