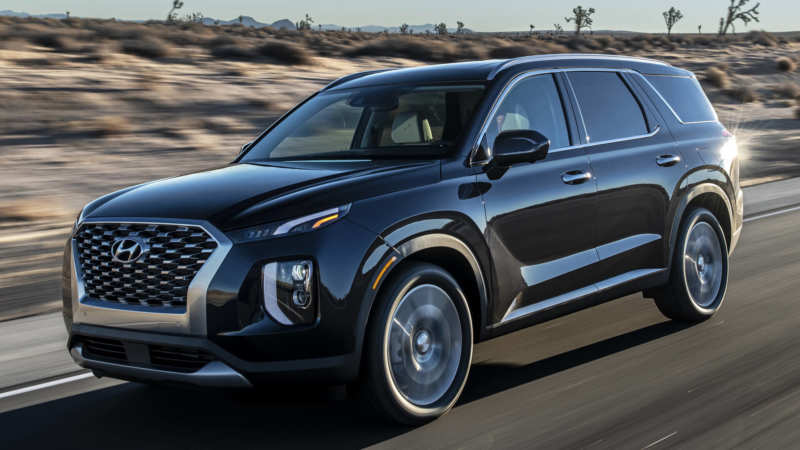 Hyundai Palisade is a front- or all-wheel drive SUV of full-size type, which is the flagship of the model range of Hyundai automobile company from South Korea. The car stands out with its monumental exterior, innovative and practical interior, as well as productive technology. As for the world premiere of the large crossover, it took place in late November 2018 during the Los Angeles International Auto Show. Already in 2019, the Korean SUV began selling in America, and from 2020 sales were also started in the Russian market. The whole model range is Hyundai.


The appearance of the new Hyundai Palisade is quite unusual but very modern. Although it was decided to borrow the platform from Hyundai Santa Fe, but it was decided to draw the body of the new crossover from scratch. There are no common body parts, if only because the dimensions and the design itself are different. The nose area has a massive radiator grille, which has a traditional rectangular inset. The new Hyundai Palisade 2020 is improved thanks to the grille trim, narrowed and made thinner in the upper part. In the lower part, it was made wider and introduced a characteristic ledge.

Also, the front end received an unusual design of optics, which was divided into two parts. The upper optics are narrowed, which makes the crossover look more serious. There is also a place for dipped beams, daytime running lights, and several sensors. Thanks to the hood’s curved lines, the appearance of the Hyundai Palisade crossover becomes more formidable. The lower part of the optics has been made open. You can notice the pronounced lenses (a pair on each) and additional LED running lights. The lower part was emphasized with the additional radiator grille, which received protection and plastic overlay. 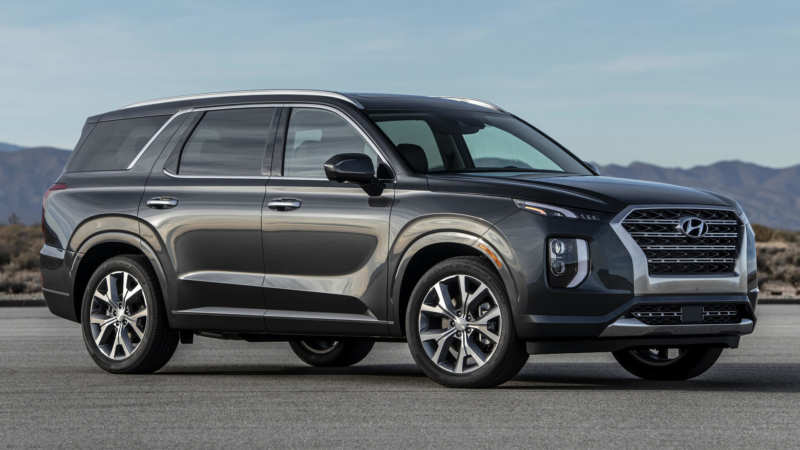 The Hyundai model range implies that the new crossover will replace the Grand Santa Fe (which in America is known as the Santa Fe XL). However, the new model has surpassed its predecessor in almost every way.

From the side, the new Korean-made car immediately strikes with its length. Since there is a large glass behind the rear doors, it indicates the 3rd row of seats. Moreover, the “Korean” shows its massiveness due to convex wheel arches, massive doors, and strict body lines. The car has a moderate amount of chrome, which is present on the inserts of door handles and the plastic trim along the bottom of the body. The design team of the Korean company decided to keep up with innovations and modern trends.

The exterior mirrors have been placed on the door panel, although for such a massive off-road model, it would be better to put them in the corner of the front windows. The basic Hyundai Palisade package already boasts LED turn signal repeaters, an electric mirror package, automatic folding, and 2-mode memory settings. Eight variants of body shades are provided. The stylish and huge crossover Hyundai Palisade 2021 is based on 18-inch light-alloy wheels, which received a proprietary design. However, you can optionally put even 20-inch “rollers” with a different style. The ground clearance height was a rather impressive 200 millimeters. 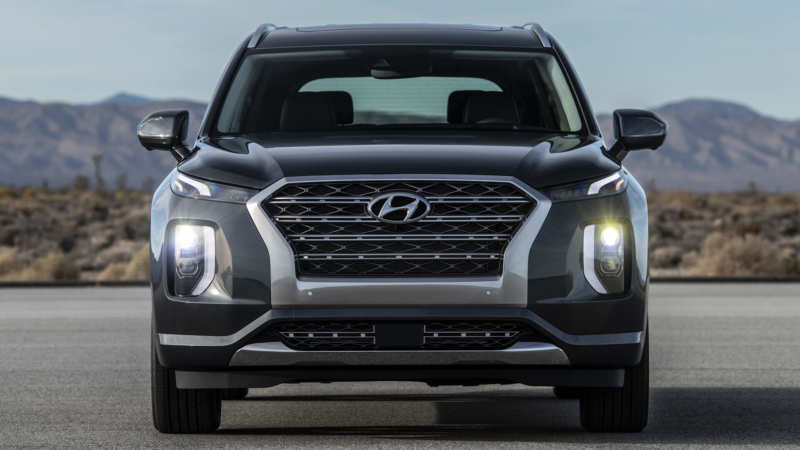 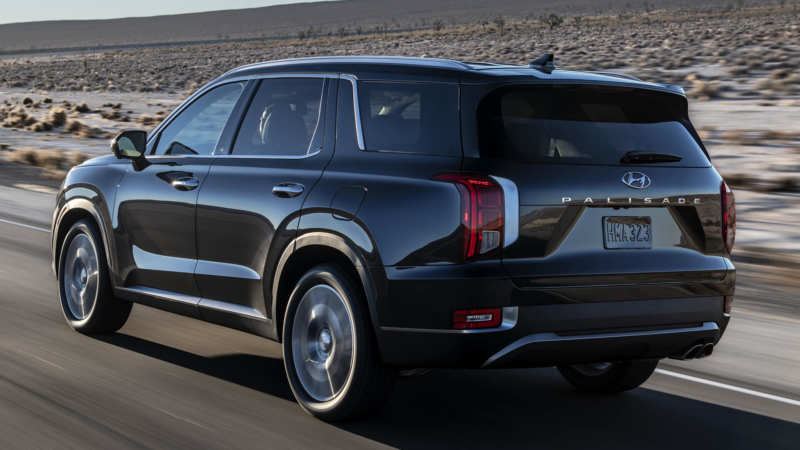 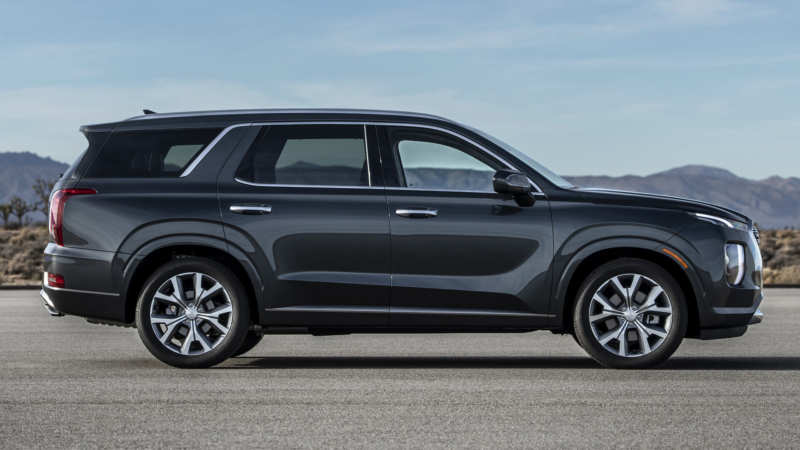 The rear end keeps up with the overall exterior of the Hyundai Palisade. Every element is modern and huge. The design department decided to make a massive luggage compartment lid to make it easier to load/unload bulky cargo to increase convenience. Also, if necessary, this luggage compartment platform can be used for seating.

The restraint is also present in the rear LED footrests, the small spoiler replaced at the very top, and the large chrome inscription in the stern’s central part. The rear bumper, which received a huge diffuser, fits perfectly. It was decided to make the ends of the exhaust system as paired. There can be two or four of them, depending on the configuration.

The owner is welcomed by a comfortable, multifunctional 3-spoke steering wheel. Behind it, the Koreans have placed an analog-digital instrument panel. For some reason, the company did not dare to put a fully electronic “dashboard”. It has two large analog gauges, as well as a small LCD, placed between them. It displays information from the side cameras when the turn signal is on.

Next, the dashboard connects to the main 10-inch multimedia display (basic equipment will get an 8-inch screen). It allows you to control all the functions, display the navigation system, and so on. Nearby there is a place for two nice strips, which received physical controls. Then you can notice little air ducts of the ventilation system. The presence of loudspeakers, which transmit the voice in the front with the speakers in the back, Rear Sleep Mode system, which turns off the rear speakers when children sleep there, is pleasing. 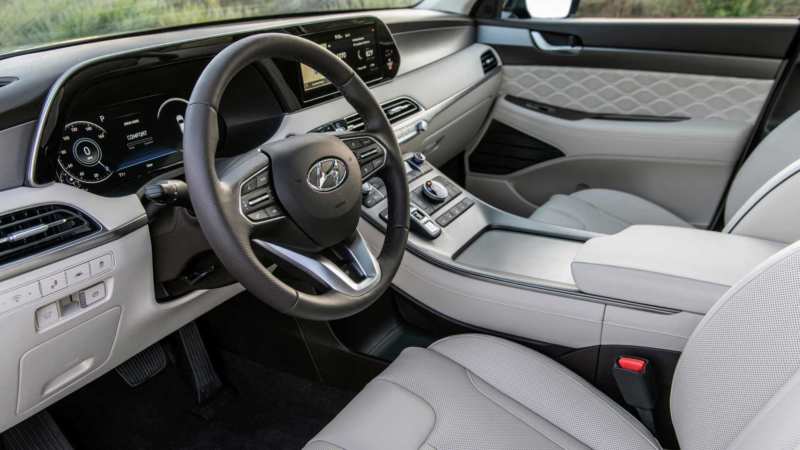 It is also worth highlighting an interesting function Rear Occupant Alert, which does not allow you to forget something inside. The tunnel has an unusual design, which is equipped with a clear “climate” block. What also surprises me is the keys to control the gearbox. On the right side, there is a puck, which controls off-road modes. Very unusual decision. Just behind all this, there are two cupholders, which have received the function of heating or cooling of the contents of the set in them dishes. At the very end, the engineers installed a solid armrest, which has a voluminous refrigerator box inside.

One of the new Hyundai Palisade’s main features is the 8-seat interior, which as a different option can be made 7-seater by installing split seats in the back. And so, the third row got a sofa for three people. Interestingly, there is enough free space if we compare “Korean” with many other 7-seater crossovers. Still, it is not necessary to put the third passenger on the sofa. 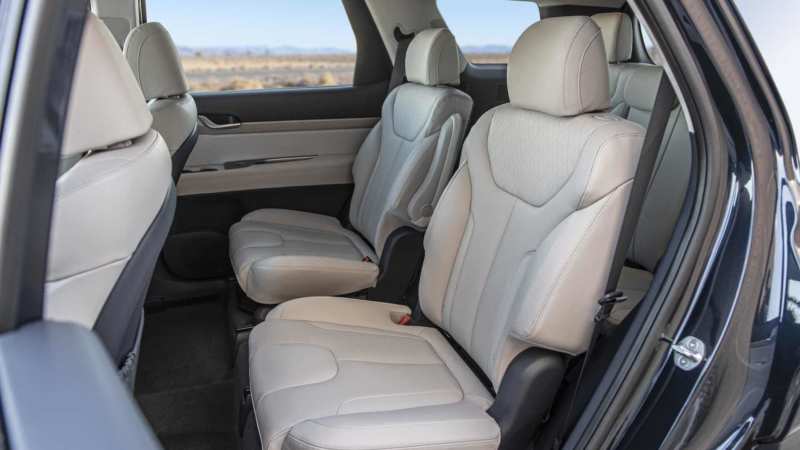 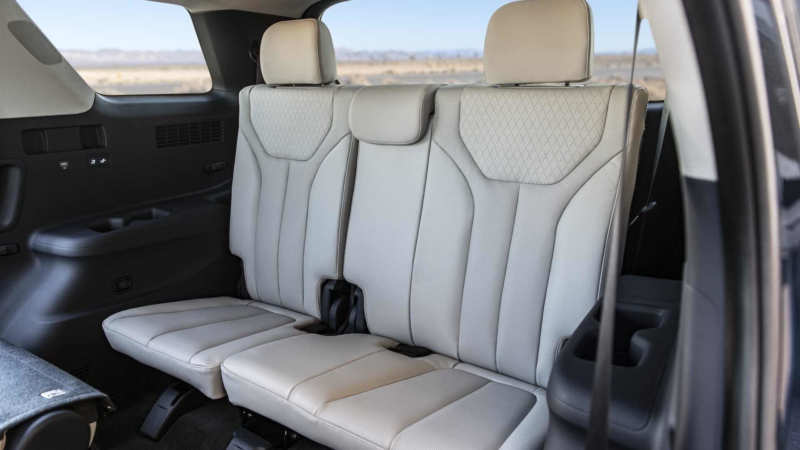 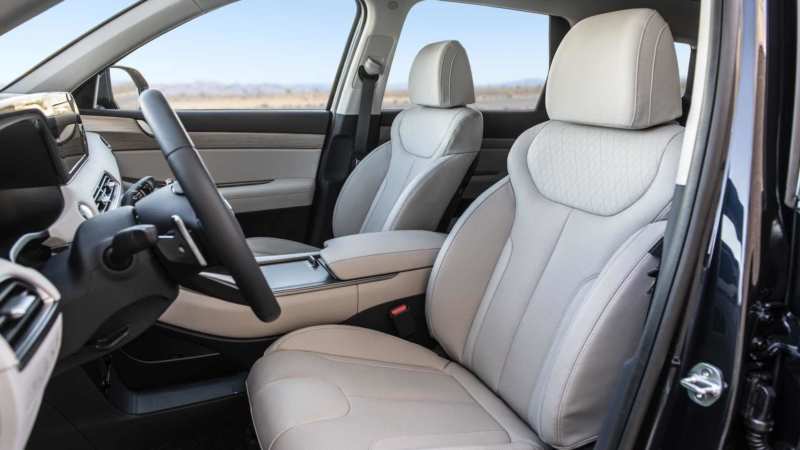 In the role of the top seats are, of course, the front, which received electric adjustments, the function of heating and ventilation. The middle row boasts quite comfortable seats, equipped with small amenities, where you can attribute USB-ports and cup holders. Also, there is an additional armrest and autonomous climate control system. For those sitting in the back, only seat heating is available.

Did you know that the new Hyundai Palisade 2020 has as many as 16 cupholders and the number of USB ports is 7. 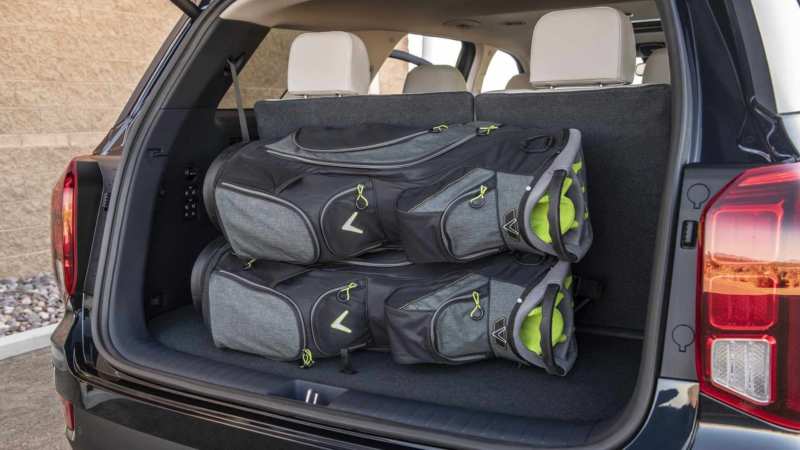 The quality of the finishing materials fully fits the brand and price tag. Everything looks great. The buyer will be happy with aluminum, multicolored leather, and even wooden inserts. As for the plastic itself, it is quite soft and generally good. However, the Koreans are still far from the Germans in this respect.

On the other hand, we should not forget that the Palisade does not cost its German counterparts. The crossover received a large luggage compartment – 510 liters. But having removed the third row, the figure will increase up to 1 297 liters. If to fold the middle row, the volume passed over 2 thousand liters of usable space (American standard SAE). As Hyundai Palisade’s review showed, the interior of the new car is very convenient, comfortable, and practical.

For the domestic market, Koreans have provided two engines to choose from. The role of the first performs gasoline 3.5-liter six-cylinder atmospheric power plant MPI, which has a V-shaped structure, the system of distributed gasoline injection, a 24-valve gas distribution mechanism, and variable valve timing. All this allows the engine to generate 249 horsepower (336 Nm). Acceleration from zero to the first hundred takes 8.1 seconds, and the top speed is at 210 kilometers per hour.

Also, for fans of diesel, the Koreans offer a 2.2-liter four-cylinder inline motor, which has a system of battery “power,” turbocharger, and 16-valve gas distribution mechanism type DOHC, producing about 200 “horses (441 Nm). Diesel “engine” spends to overcome the first hundred 10.5 seconds, and its maximum speed limit is limited at 190 kilometers per hour. It’s nice that the performance of the Hyundai Palisade 2020 with two engines allows you to forget about the lack of power. 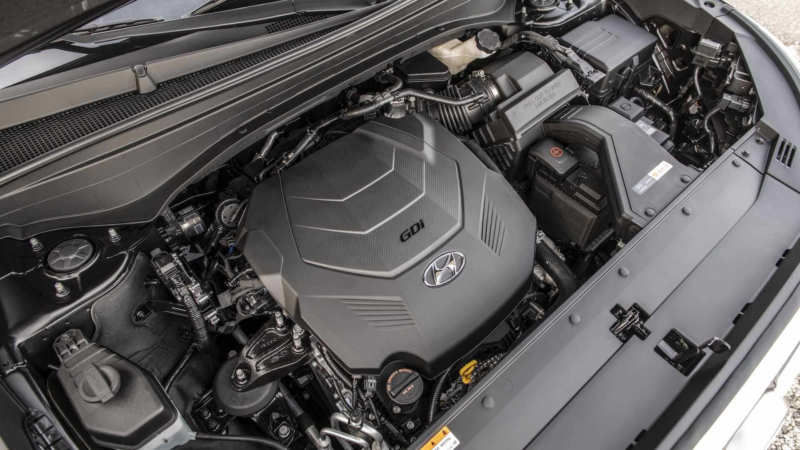 All basic Hyundai Palisade 2021s are equipped with an 8-range hydro-mechanical automatic transmission, which knows how to switch to parking mode when the engine is turned off or one of the doors is opened. All torque forces in this case will be transmitted to the front wheels. But as a separate option (and for the domestic market by default), the car can be fitted with the intelligent HTRAC all-wheel drive, which has an electronically controlled multi-disc clutch that can transfer torque to the rear wheels when necessary.

The owner can choose between Normal, Sport, Smart, and Snow modes to pass obstacles better. The electronic system manages to adjust the efficiency of the all-wheel-drive independently. As you can see, the Hyundai Palisade’s technical characteristics are impressive, especially the default four-wheel drive.

As the base, Hyundai Palisade 2021 Koreans decided to use a “front-wheel drive” base, which was borrowed from the “Santa” 4 family, which implies the transverse placement of the power plant, as well as the carrier body, which is equipped with a power structure with a high percentage of high-strength steel. The front end received an independent suspension type McPherson, and the rear – multilever structure, but everywhere the car is equipped with basic springs, hydraulic shock absorbers, and stabilizers transverse stability.

Even as a separate option, there are no adaptive shock absorbers. Such a giant is controlled by rack-and-pinion steering, which has an active electric booster. The braking system has ventilated disc devices “around the circle,” which are complemented by electronic systems ABS, EBD, and other electronic “chips.”

Since the Korean company positions its model as a family model, it is logical that it should be very safe and comfortable. It is nice that the Koreans have not spared money on the development and installation of the necessary elements. So, the safety Hyundai Palisade has the availability: 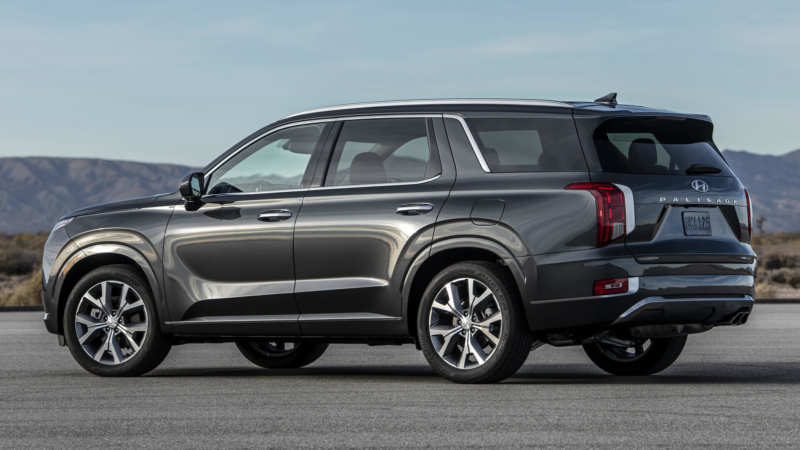 But the price of Hyundai Palisade in the top variant will start from $48811.98. To install a seven-seat interior, you will have to pay at least $49853.58. However, such a crossover will already get:

The appearance of the Korean crossover in such a “huge class” practically forces the “Korean” to compete with some leading cars of the same class, which already have a lot of experience in this. The Japanese Toyota Land Cruiser, Nissan Patrol, Honda Pilot, Toyota Highlander, Nissan Pathfinder, American Chevrolet Tahoe, Ford Explorer, and Korean KIA Mohave. As you can see, there are enough competitors, but on the side of Korean model there is a good price/quality ratio, which can become a decisive factor when choosing a car.

So, what can be said in the end. Can we call the new Hyundai Palisade 2021 the best in its class? Hardly, but the car has quite an attractive price tag. It can become an important criterion in the choice of a huge crossover. In addition, the “Korean” can offer an original appearance, comfortable, comfortable and practical interior, as well as a roomy luggage compartment.

This includes an all-wheel-drive system and high ground clearance. Of course, the car has not received a particularly powerful engine. It boasts only a simple suspension with standard shock absorbers, while some competitors have adaptive suspension. However, all this is leveled by the price tag, which the Korean company is counting on.

We advise you to read the article: Hyundai Motor Company History 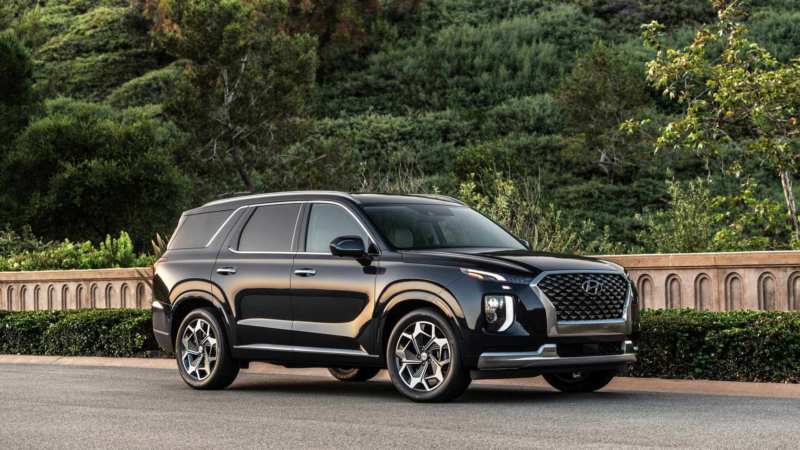 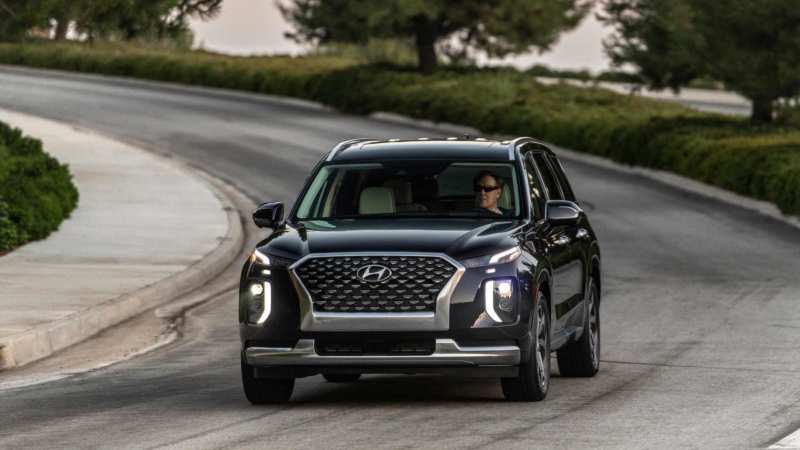 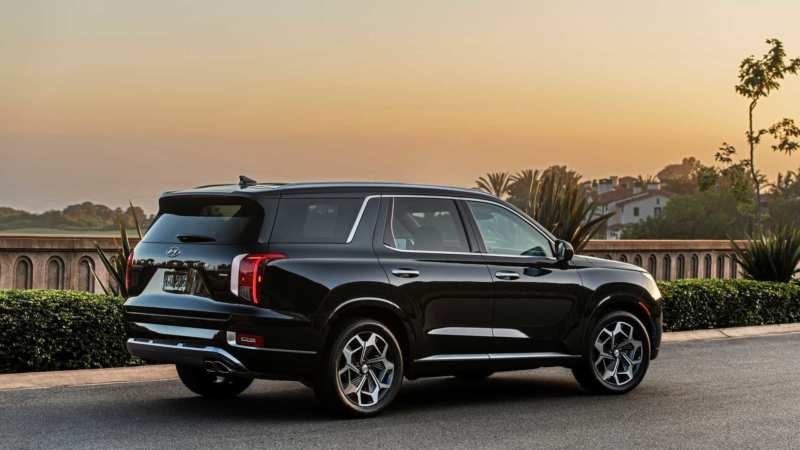 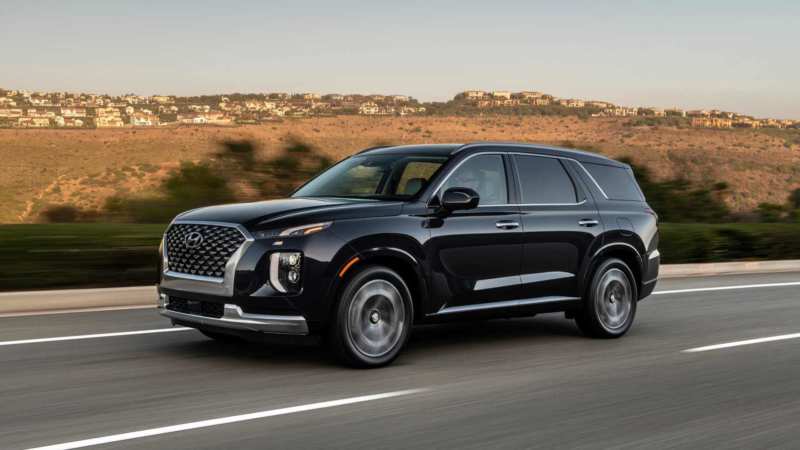 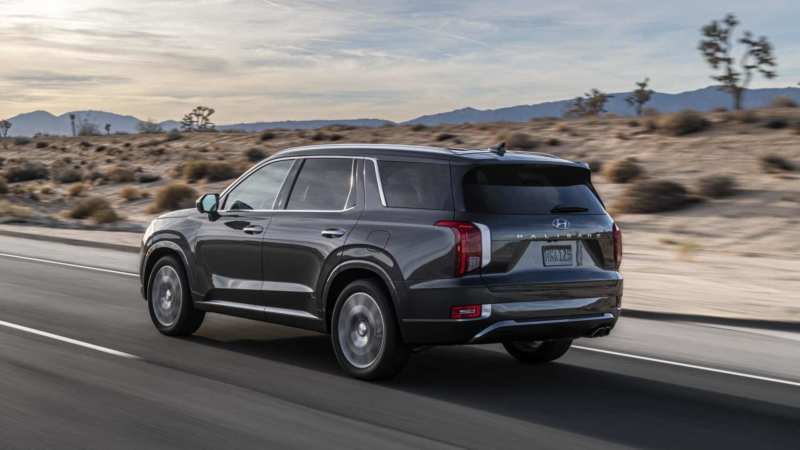 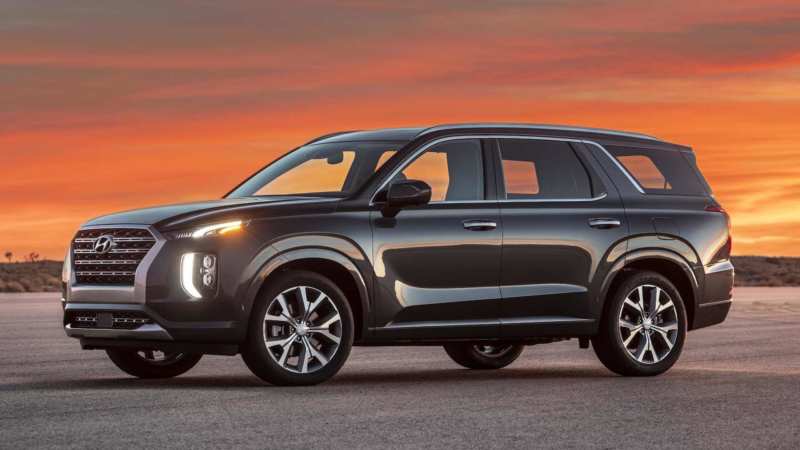 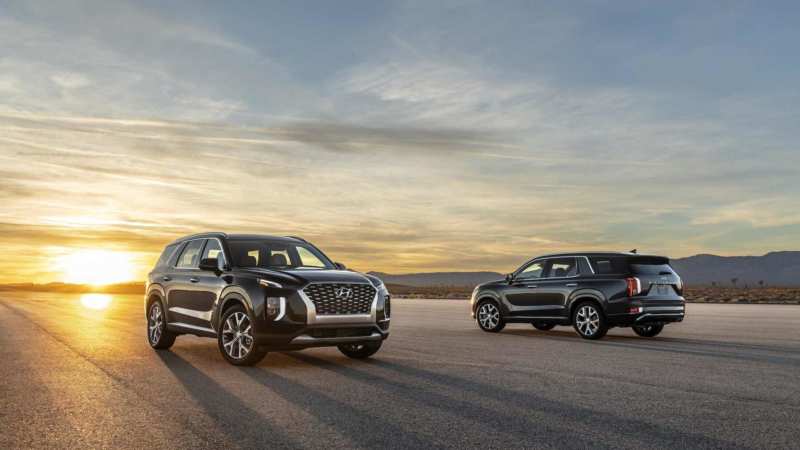 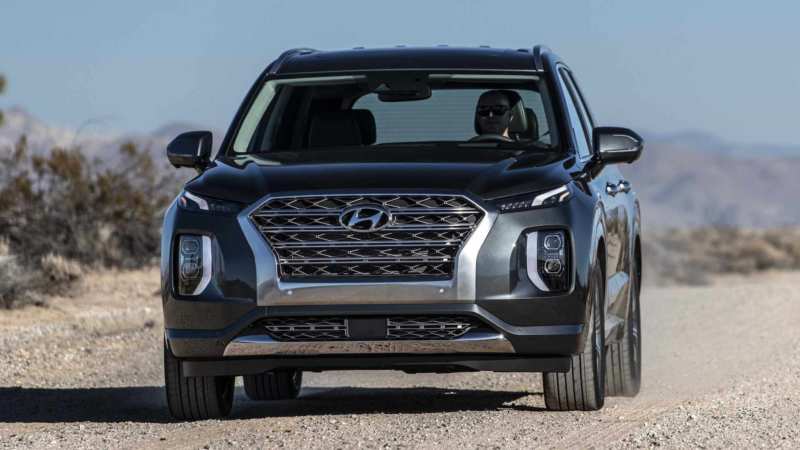 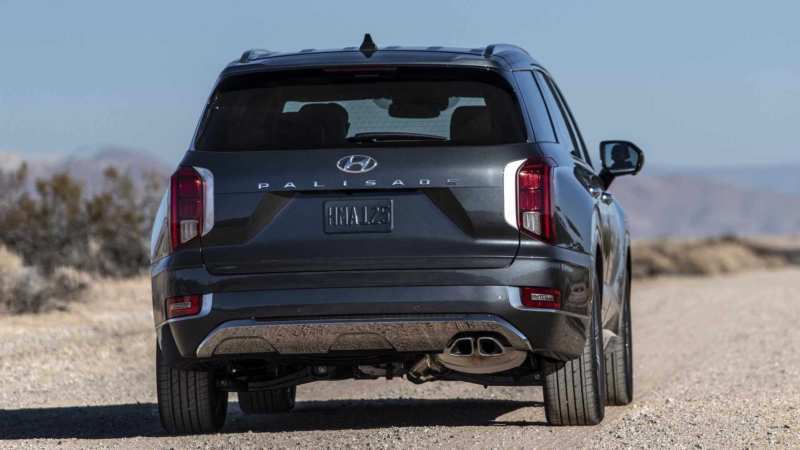