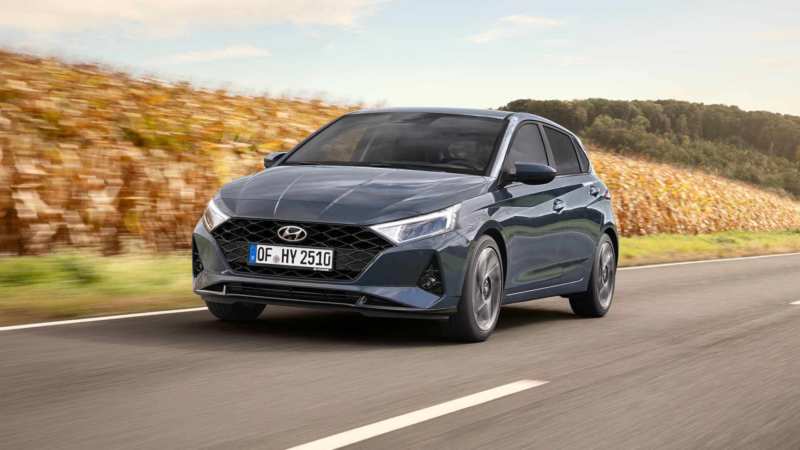 Hyundai i20 is a front-drive 3 or 5-door subcompact niche hatchback, which is produced for non-standard people who prefer an active lifestyle (according to the automaker from South Korea itself). B-class car replaced another common hatchback Hyundai Getz in the Korean lineup and debuted in the fall of 2008 during the international Paris Auto Show.

After that came the second generation of Hyundai i20 in 2014, which also could boast with “off-road” and “sports” modifications. And now, on February 19, 2020, the Korean company has presented the 3rd generation of Hyundai i20, which has become better by all parameters. This Hyundai i20 hatchback became the first car of the brand in Europe, the appearance of which was “drawn” in the traditional style of Sensuous Sportiness. After such an update, the car now has an improved “bogie”, a completely redesigned interior, the latest power units, and also received a soft-hybrid add-on. But let’s talk about everything in detail. The whole model range is Hyundai.

Speaking just for the concept, it is about the harmony of such elements:

During the creation of this appearance, the engineering team set itself the task of transforming the character of the famous “hatchback”, so that due to this increased its dynamism. The appearance of the 3rd generation Hyundai i20 2021 boasts excellent style and expressive decoration. The body is designed in a sporty style, which corresponds to the appearance of the car, and also features certain elements with the rally past of the car company from South Korea. 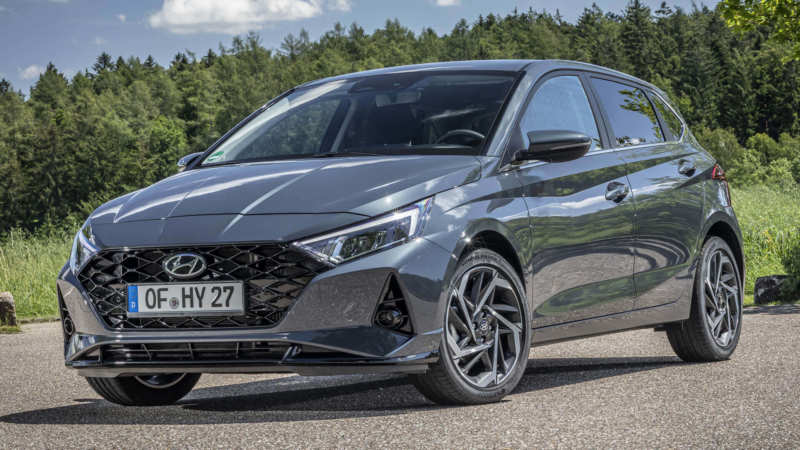 The new Korean is distinguished by its aggressive front end, increased proportions, and ten available body color variations. The front end has a radiator grille characteristic of the South Korean company, which occupies almost the entire projection of the body and has the outlines of an hourglass. It is complemented by unique optics, which received LED filling. Both the front and rear bumper slightly protrudes over the body.

From the side, the Korean car got a dynamic silhouette and a contrasting roof in black, which is slightly narrowed to the rear. It was decided not to change the roof. Although there is an aggressive profile concept with lots of bulges, the car is equipped with a roomy interior, creating a sense of extra space and airiness. 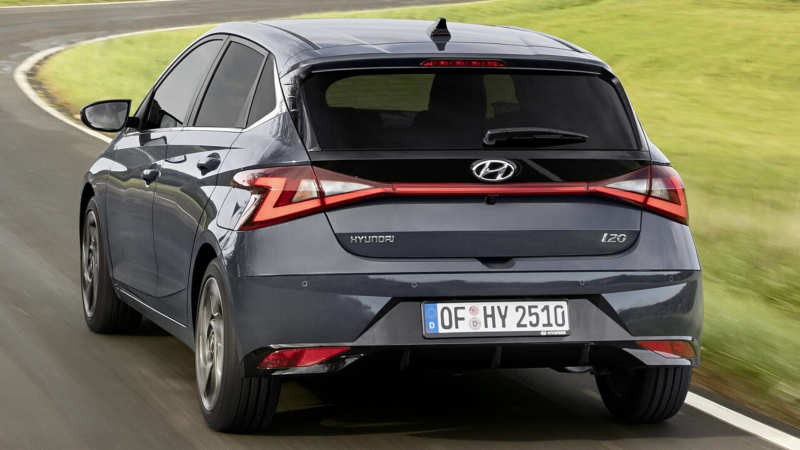 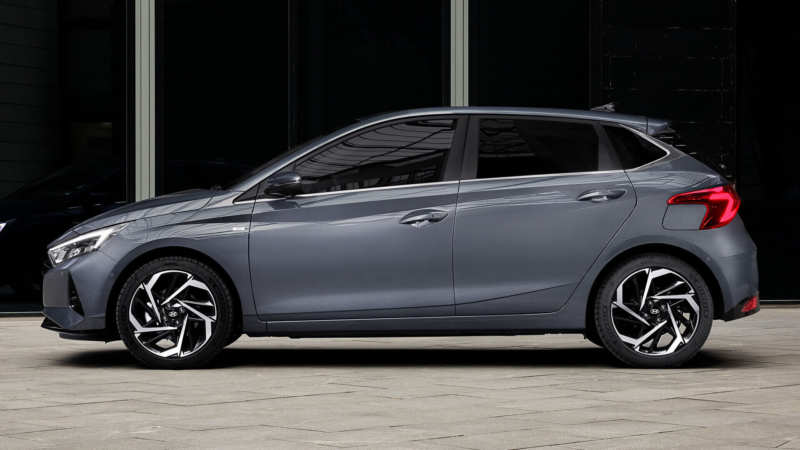 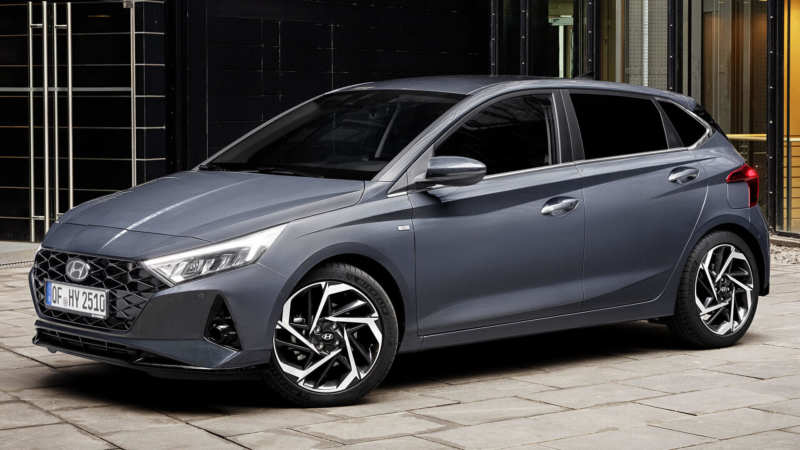 The Hyundai i20 stands out for its energetic proportions and wedge-shaped design. It has a bold line of side glazing and an unusual design of the rear pillar. Thanks to the integration of the original perimeter lighting, it was possible to intelligently combine the side and rear. Already basic configuration Hyundai i20 has 17-inch wheels of light alloy, received a new original drawing (the previous model in the base had only 16-inch “rollers”).

In 2015, Hyundai i20 2nd generation was able to earn the maximum “5 stars” during crash-tests organization Euro NCAP.

The rear of the new Hyundai i20 2021 has received spectacular lights, which have Z-shaped graphics, connected with a luminous strip and a powerful bumper with a pronounced diffuser. The “puffy” bumper is very stylish. The luggage compartment door looks very modern, it has a rather large glass. At the very top there is a brake light repeater.

Because engineers have implemented so many improvements to the interior of the Hyundai i20, it now looks more beautiful and functional. The specialists of the company were looking for truly revolutionary solutions, so they did not do without the boldest technical and aesthetic innovations, allowing to save the special charm of the sports hatchback. The car is produced as a 5-door hatchback, which implies a 5-seat layout. The new generation has the best features for communication and entertainment. These include Apple CarPlay and Android Auto, supporting wireless synchronization with a smartphone to project display content.

The interior of the Hyundai i20 looks simple and comfortable. The designers decided to stick to a sculptural style, aiming to make the interior more presentable. It has some interesting features, where we can relate the horizontal blades which cover the protruding “dashboard” with a high landing. This visually expands the front part of the cabin. This creates, in turn, an airy effect. 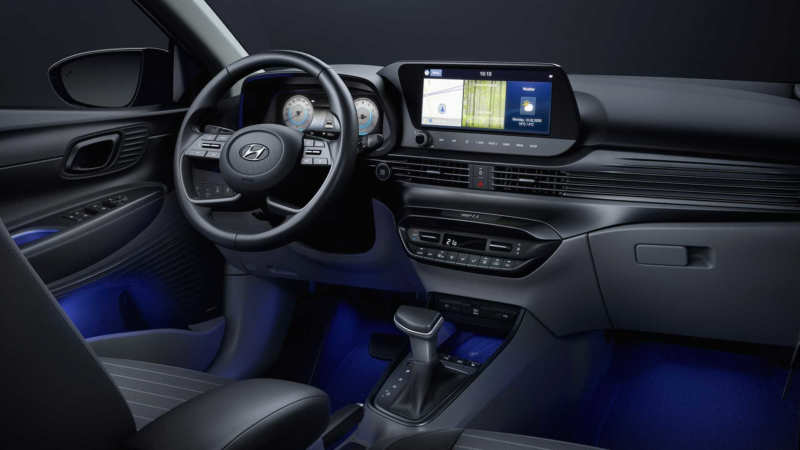 Immediately in front of the driver is a stylish 4-spoke multifunction steering wheel. Behind it is a 10.25-inch dashboard. This configuration emphasizes the uniqueness of the interior. The central part of the torpedo boasts a 10.25-inch display of the infotainment system, which supports touchscreen control (basic versions have only 8.0-inch screen).

Torpedo looks simple, but without the stylish metal rails, under which the air ducts of the ventilation system is hidden. The central console now has a platform for wireless charging. In addition, there are three USB ports. Bose Premium Sound acoustic system is responsible for the sound quality, which stands out with more volumetric and qualitative sound. It has 8 speakers and a subwoofer distributed throughout the cabin, which provides high-quality sound.

The way the door designs are designed is accurate to the look of the dashboard. During the creation, the design team was inspired by natural ideas. The multifunction steering wheel has a variety of controls, and the color accents are clearly combined with other interior elements. Korean company has provided several options for interior’s lighting, which also includes a soft night mode. Such an effect was achieved with the help of technology of blue LEDs.

Thanks to expertly chosen proportions hatchback Hyundai i20 2021, turned out to make a wider wheelbase, if compared to the previous generation. It had a positive impact on the additional space for the rear row. The luggage compartment became 26 liters more, so now it has 352 liters of usable space. If you remove the second row of seats, you can increase the volume to 1,165 liters.

For the European market, the 3rd generation Hyundai i20 is available only with gasoline-powered engines. The base engine is a 1.2-liter four-cylinder atmospheric engine with distributed fuel injection, variable valve timing and a 16-valve timing mechanism. It produces 84 horsepower (122 Nm). 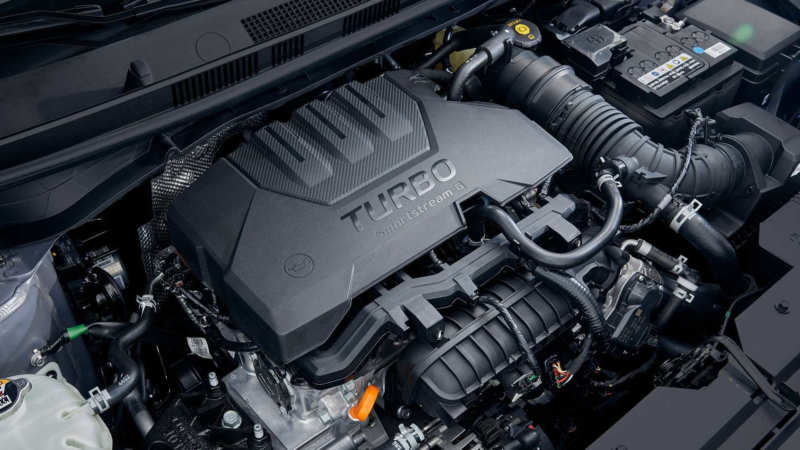 For the more productive variants, they decided to install an inline 1.0-liter 3-cylinder T-GDi powerplant with a direct injection system, turbocharger, intake and exhaust phase shifters, and a 12-valve timing system. A total of 2 power options are available:

For the atmospheric 1.2-liter engine, Korean engineers have provided only a 5-speed manual gearbox and front-wheel drive transmission. But the turbocharged engine has a 6-speed manual gearbox, which can disengage the clutch in an automatic mode when the accelerator pedal is not pressed and the car is coasting.

However, as a separate option, you can install a 7-band robot transmission, which gets two clutches. In addition to this, the 3-cylinder powertrain will receive an optional 48-volt soft-hybrid supercharger “in base” in the 120 hp version (for the 100 hp version as a separate option), which reduces gasoline consumption and environmental emissions.

For the third generation of the Hyundai i20, an upgraded platform of the previous family was provided, where the engine is installed transversely. In addition to this, in the design of the body is actively used high-strength grades of steel. The front part of the Korean hatchback has an independent suspension with McPherson struts, and the rear – the semi-independent system and torsion beam.

The car steers excellently with the help of rack-and-pinion steering, which received an active electric booster. The brake system Hyundai i20 2021 has disc brakes on all wheels (front ventilated), which work together with ABS, EBD and other systems. As you can see, the characteristics of Hyundai i20 became more modern.

The car has a fairly high level of safety. Even the past generations clearly confirm this, if only based on the results of the Euro NCAP crash tests. The new 3rd generation Hyundai i20 has a large number of electronic assistants. In addition, it has automatic braking with pedestrian detection, blind spot tracking, lane keeping system and so on.

Used technology that eliminates frontal collision, tracking the attention of the driver, as well as the system Hight Beam Assist, which is able to detect not only oncoming, but also passing cars. We are pleased with the presence of intelligent “cruise”, which functions together with the information of navigation information NSCC.

Price of Hyundai i20 of the third generation starts from 23,970 euros. It is nice that the base variant can already boast a full list of safety systems from the list of Hyundai SmartSense. More expensive versions will get a virtual “dashboard”, 10.25-inch entertainment center display, parking assistant, synchronization with mobile interfaces, heated front seats and external mirrors function, leather trim, “cruise” and 2-zone climate control. 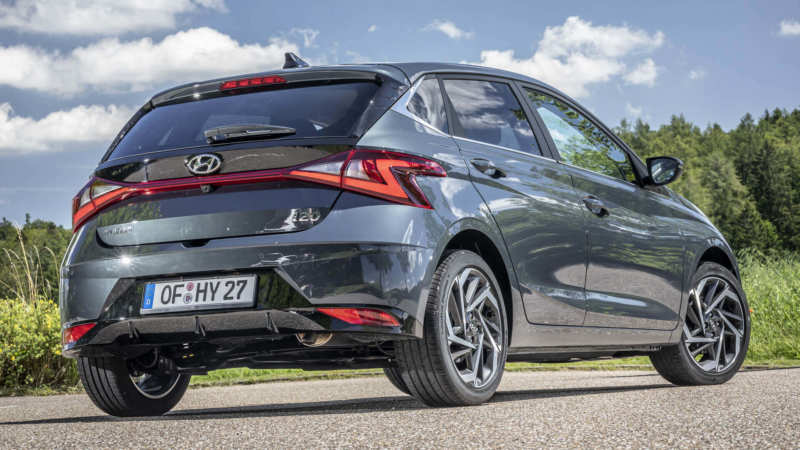 The “Korean” has enough rivals. In the role of a competitor Hyundai i20 can act Peugeot 208, Volkswagen Polo, Citroen C3, Ford Fiesta and Opel Corsa. Each model has its own advantages and disadvantages, so you should be guided by your preferences and available amount.

It is worth paying tribute to the Korean company, which was able to release a really interesting hatchback Hyundai i20 2021, which in no way can be called boring. The car has a sporty, aggressive appearance, very stylish unique wheels and original taillights, which will definitely distinguish the owner from the city crowd. Inside, there is the most modern stuffing, 2 large displays, one of which is a touchscreen.

For practicality, the Koreans have provided a very roomy trunk, which will make you feel quite confident, as for a city car. The power of the motors is enough. Those who appreciate the nature can pay attention to the “hybrid” version, which not only reduces the gasoline consumption of the Hyundai i20, but also reduces the amount of emissions into the environment. 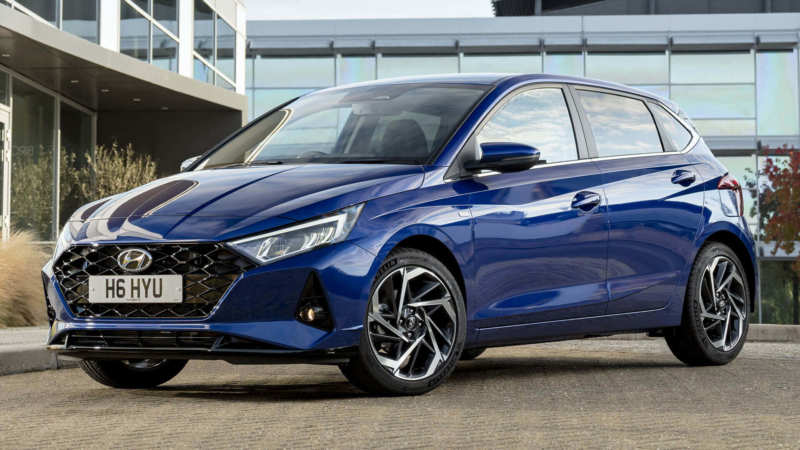 We advise you to read the article: Hyundai Motor Company History 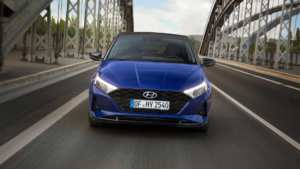 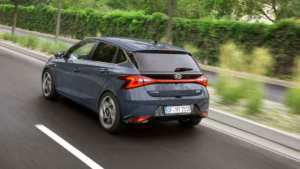 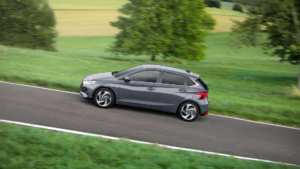 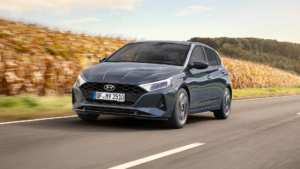 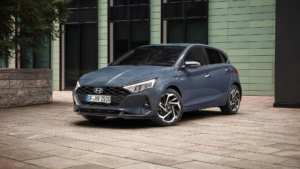 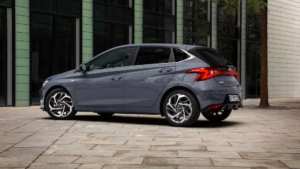 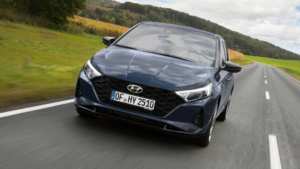 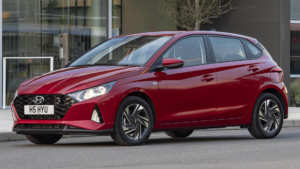 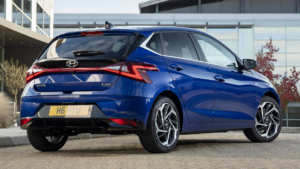