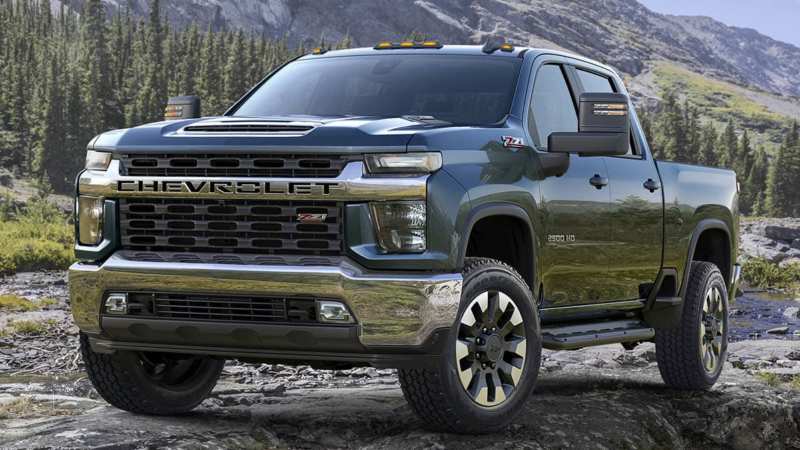 Chevrolet has declassified the appearance of the Silverado pickup truck. It turns out that this design is not the only one. Not one, but 5 versions of the design will get a new American pickup. One shouldn’t be surprised by such an abundance of modifications. The light version of Chevrolet Silverado without HD console has 8 styles! The differences are insignificant and come down to several nuances of decoration: optics design, grille installation on the radiator, etc.

Silverado HD has a similar story. Chevrolet showed the public the car in the LT version. And now High Country is intriguing. Journalists managed to find out that it will be the most expensive pickup equipment. It will differ from other cars by chrome grille.

The inscription Chevrolet will be removed – instead of it the emblem of the car concern will appear in front of it. It is an interesting fact that in America the brand’s logo is called “butterfly tie”. It sounds very beautiful and corresponds to the extravagant style of Chevrolet, doesn’t it?

In addition to the LT and High Country versions, car enthusiasts will be able to buy a pickup truck in modifications of LTZ, Custom, Work Truck. Detailed vehicle specifications are unknown. However, General Motors always preferred to share information in a dosed manner, thus heating up interest in the upcoming premiere. All new products will debut in February next year.

What is the highlight of Silverado HD? It turns out that the basis for its production was the image of Chevrolet trucks, which were popular in the 60s. The abbreviation HD means Heavy Duty or “giant payload”. The HD version of the car received an original design, borrowing from its elder brother Chevrolet 1500, except the roof.

The manufacturer specified that the “heavy” pickup truck has significantly increased its payload. The maximum permissible weight of the trailer, which is capable of towing Chevrolet, has also grown. The exact data was not given. For comparison, the current Silverado supports the transport of loads up to 1466 kg, towing trailers up to 9.5 tons.

In addition to its striking appearance, the overseas pickup truck will have another unusual solution. The designers decided to build the steps into the body behind the cab. Thus, the owner of the car will be able to place the luggage without the need to climb inside. It is also known that the manufacturer has made the driver’s seat even higher. And in the double-row cabin there is much more space.

Experts assume that Silverado HD will have two motor variants. The characteristics of the first one have already been revealed – it is a turbocharged diesel engine Duramax.

Recall that the GMC Sierra is equipped with the same engine. As for the second engine, it is promised to be petrol, with direct fuel injection. It will be paired with a 6-speed gearbox.

Modification of Silverado HD 2020 was called the most advanced and technologically advanced in the history of the Chevrolet brand. Sales are scheduled to start in June-July 2019.