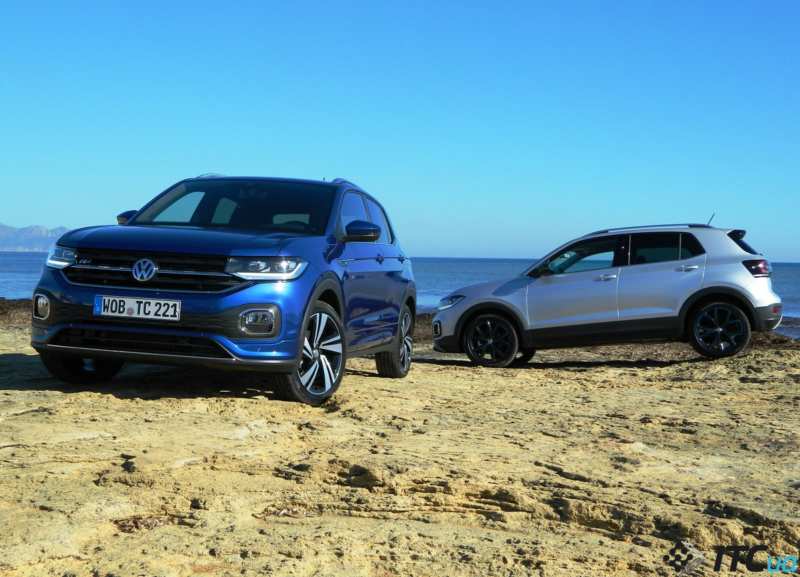 It seems that Asian crossovers in the face of Kia and Mazda have a serious competitor. On the heels comes the parquet flooring T-Cross. In winter 2019, the serial version of the German car will go on sale, and the presentation is just a few weeks away. The main characteristics of Volkswagen T-Cross are already known.

To create a cardinally new body of the car Volkswagen T-Cross, the German car concern involved a team of prominent designers under the leadership of Klaus Bischoff. The novelty managed to preserve the corporate identity of Volkswagen and get a number of updates that make it perfect.

Judging by the photos, the T-Cross model embodies the advanced solutions of “Teramont” and “Tiguana”. Despite the budget status, it is not visible in any way – the car looks bright and youthful. The body consists of many sports-style reliefs and thresholds. It differs from its predecessors by dynamic lines of the body, rather large arches of wheels connected by a stepped profile.

Relatively small optics blocks were complemented by fog lights and integrated into the diffusers. The concept discs fit perfectly into the parquet flooring design. On the rear side, the trunk vertical, inclined glass with a spoiler, and optic louvres (they are combined) stand out well.

The interior of the German crossover T-Cross is made in a modern style, especially for young people. The salon has many accents, unexpected contrasts. The quality of materials remains high, the level of comfort, the layout of components also do not cause criticism. Note the most interesting changes in the interior:

The long axle base of 256.4 cm ensures excellent driving characteristics. The high ground clearance makes it easier to navigate difficult terrain. The motorist who intends to buy a new Volkswagen T-Cross, will be able to choose one of four variants of atmospheric, turbocharged engines.

Their power varies from 95 to 150 horsepower. A choice of 5- or 6-speed manual transmissions is available. A six-speed gearbox, 7-speed DSG “robot” is also available.

Volkswagen T-Cross 2018 is based on the MQB A0 front-drive platform. The other technical characteristics are the same as the Polo model – the parquet flooring is built on the basis of this car.

Sales in European countries are scheduled to start in November-December 2018. The exact date of Volkswagen T-Cross 2019 release in Russia is not yet known. Most likely, this will not happen before the first quarter of next year.

The customer will have access to 6 sets of the new Volkswagen. They will differ in on-board equipment, engines, transmissions and other features. The approximate cost of the basic equipment is 17,500 euros.

In the market of relatively inexpensive parquet flooring played a serious fight for the sympathy of buyers. Will the new Volkswagen T-Cross be the winner? The competition to the German crossover will be put postrestyling modifications of Mazda CX-5, Kia Rio X-Line, Audi Q3, Toyota Rav 4. With reservation you can add Citroen A4 Aircross, Nissan Juke to this list.