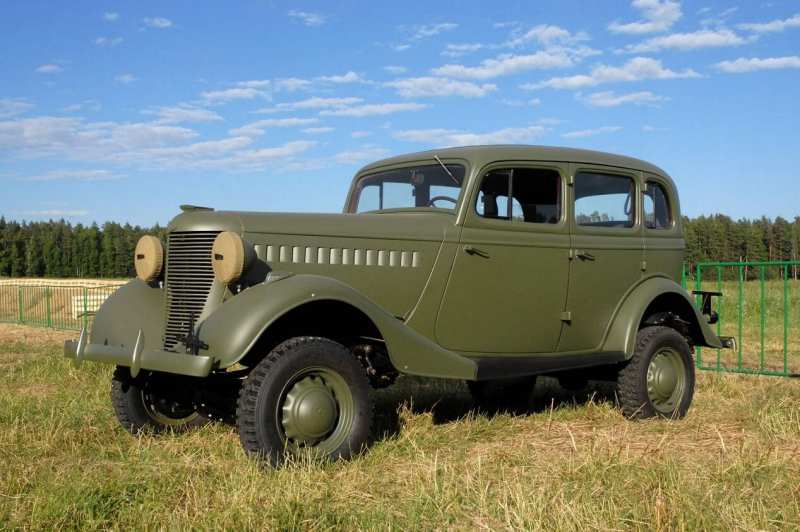 GAZ 61 is a Soviet passenger car with increased cross-country ability and all-wheel drive system. GAZ 61 73 became the world’s first all-wheel drive passenger car in a closed sedan body. When the Great Patriotic War was going on, the GAZ 61 73 vehicle was actively used as a staff model for the RKKF top command. In total, the company in Gorky produced no more than 200 vehicles of this type. The whole model range is GAZ.

The 61st model was created in 1938. Grachev’s design bureau was working on it, where they were looking for a replacement for an overly complex and not so passable three-axle GAZ 21 Experimental 6×4 vehicle. The design of the off-road vehicle was entrusted to Lependin, Borisov, Zislin, Kirsanov, Kosktin, Kuzin, Mozokhin, Pimenov and Podolskiy.

When they created the car, they began to explore the American-made Marmon-Harrington, which was a four-wheel drive sedan on the Ford-V8 platform. By the end of the 1930s, a considerable number of countries began to produce cars with increased cross-country ability and a pair of leading axles. 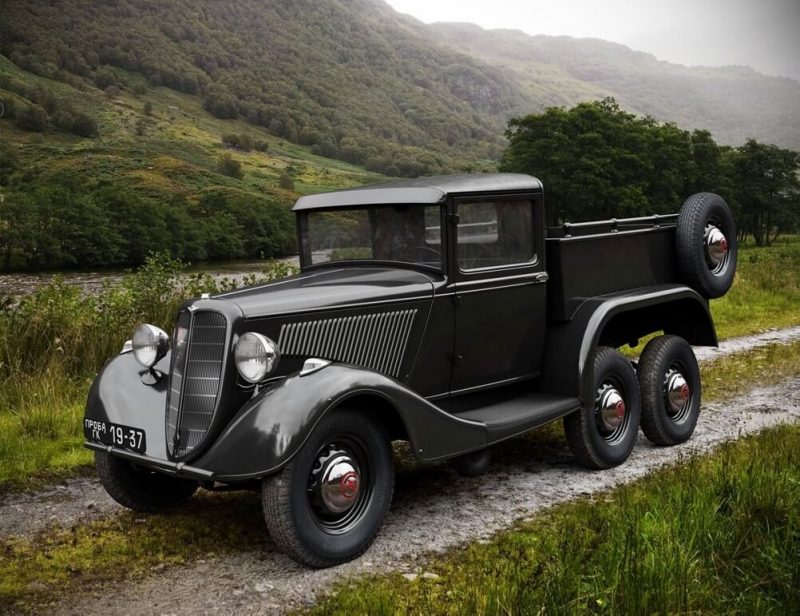 In the Soviet Union, the automobile plant in Gorky became a pioneer in the design of cars with increased cross-country ability. The country needed such cars during the development of new areas, on construction sites, in the countryside and the army. In mid-summer 1938, the technical specifications were issued, and in September they began to design a four-wheel drive version of the new machine with the marking “61”.

GAZ-61 worked as a vehicle for many high-ranking people of the Soviet Union.

Before the height of the war was a very heated situation – it was necessary to work in a short period of time, the design was given a few months and weeks. Despite the fact that initially the vehicle was planned to be produced in the open body (phaeton), its serial production was set up as a model GAZ 51 73. 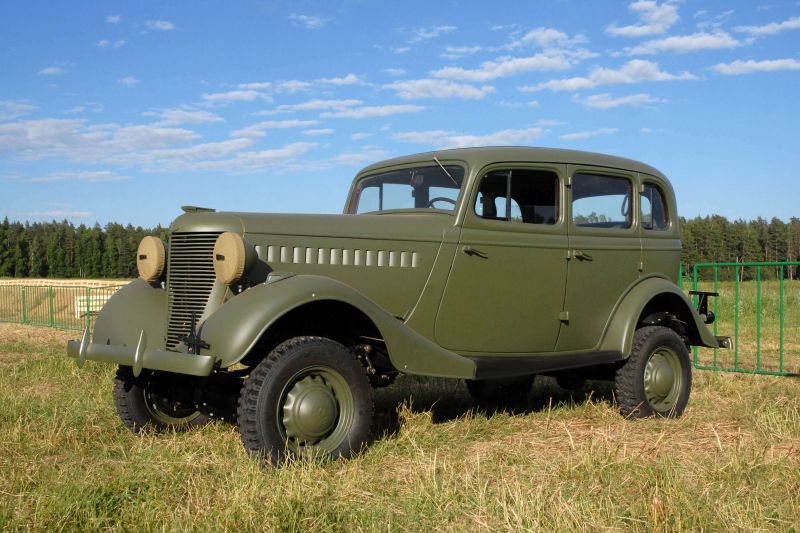 Where was the all-metal sedan body from the marking of the car 11-73, which was the debut model of a comfortable SUV with a closed “sedan” body. Already in the summer of 1939, the prototype began to be tested. They lasted all summer and autumn. The sedan had a speed of 107.5 kilometers per hour, while spending about 14 liters of gasoline per 100 kilometers. The designers were able to use, in general, the parts of vehicles, which were produced in serial order.

But the front axle was designed from scratch together with the dispenser. The chassis, along with the body, brakes and electrical equipment were used from GAZ 11 40 phetons. Four-speed gearbox – from the “lorry” GAZ-MM. The prototype was equipped with a Dodge D5 engine, after the domestically produced engine was installed. The first off-road open top models were purchased by Marshal Voroshilov, generals Zhukov, Tyulenev, Meretskov and Pavlov. 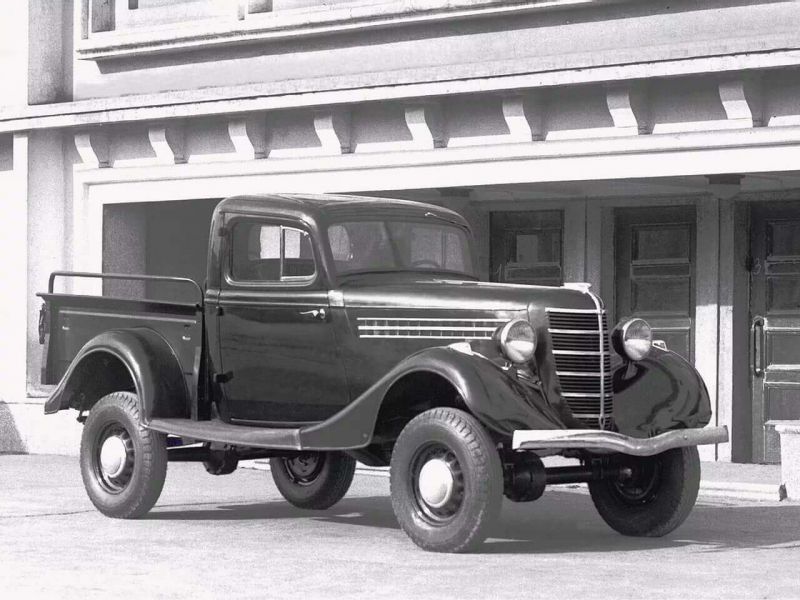 Summer 1940 allowed to present the car at the All-Union Agricultural Exhibition among the most preferable examples of the Soviet car production. In the same year it was planned to be mass-produced. With the help of all-wheel drive system, a solid reserve of engine power, increased gear ratio in the gearbox, tires with a specialized profile and increased height of the frame by 150 millimeters. The newest vehicle has overcome on a ground covering such lifts which not any caterpillar model is capable to overcome – up to 43 degrees.

The model was not afraid of sand, rainy ground or snow (up to 0.4 m). Moreover, GAZ-61 could tow a trailer weighing up to 700 kg. The log was not a problem, and the car was moving over it even if its diameter was 0.37 m. Interestingly enough, the model could even drive up the stairs – the tests proved it. And they were conducted not somewhere there, but on the cult base of the automobile plant in the city of Gorky. The angle of arrival was 30 degrees, and the sedan rose easily and in a calm manner. 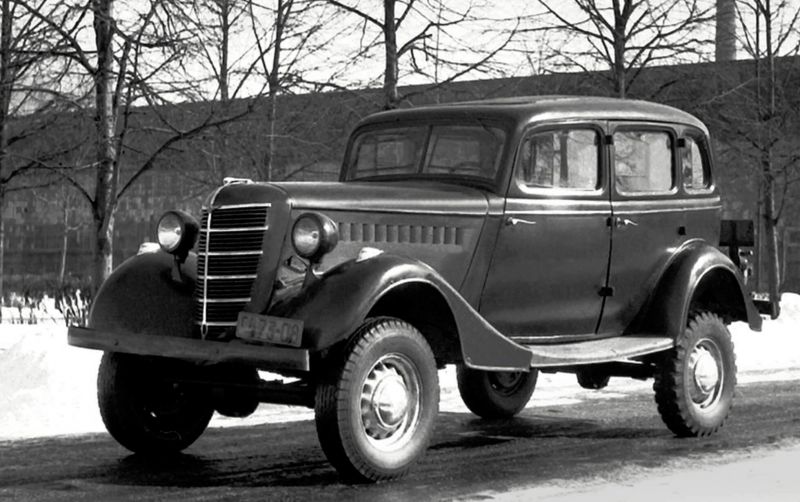 The newest model was to be produced in three variants, which best suited the needs of the army. We have not forgotten about the national economy. As a result, there was a body “phaeton”, a closed base body “sedan” and a semi-cargo “pickup”.

In those years, there was no better off-road armored car than GAZ-61-73. Because of the increased ground clearance, the car was not afraid of anything.

As the severe winter of 1941 was approaching, the open top vehicles in the debut batch decided to send to the tank repair company of Moscow No101, on which began to install sedans with closed bodies from GAZ 11 73. It is with this appearance that the car came to us. 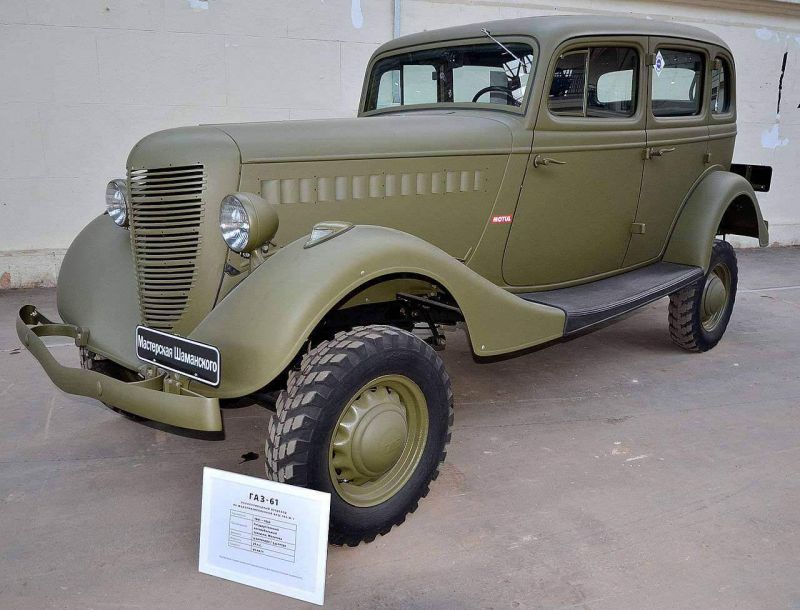 A small artillery tractor GAZ 61 417 was equipped with a 57-mm anti-tank gun with a transport front and sent to the front to the Moscow Region. It turns out that this was the presence of a high-speed and maneuverable destroyer of tanks, and only a small number of serial production did not give the machine an opportunity to demonstrate its full potential.

Production of the 417th model was stopped in 1942 due to the lack of six-cylinder engines and body parts. GAZ 61 73 was completed in 1945. It is believed that this vehicle in the sedan body was carrying the Marshal of the Soviet Union, twice the hero of the Soviet Union, Ivan Stepanovich Konev.

Despite the fact that the body turned out to be closed, this level of comfort is over. The car did not even have a stove, but there was a cigarette lighter and an ashtray in the middle of the torpedo. By the way, the latter is made of metal and has a green color, which once again proves the purpose of this car.

There is a big three-spoke steering wheel, which, naturally, is deprived of any amplifiers. The rim is thin, but the road does not close. Behind it there is an instrument panel. The latter is made in the same style as the usual “emka”, but here they decided to add an oil pressure gauge, because the motor here is subject to increased loads. 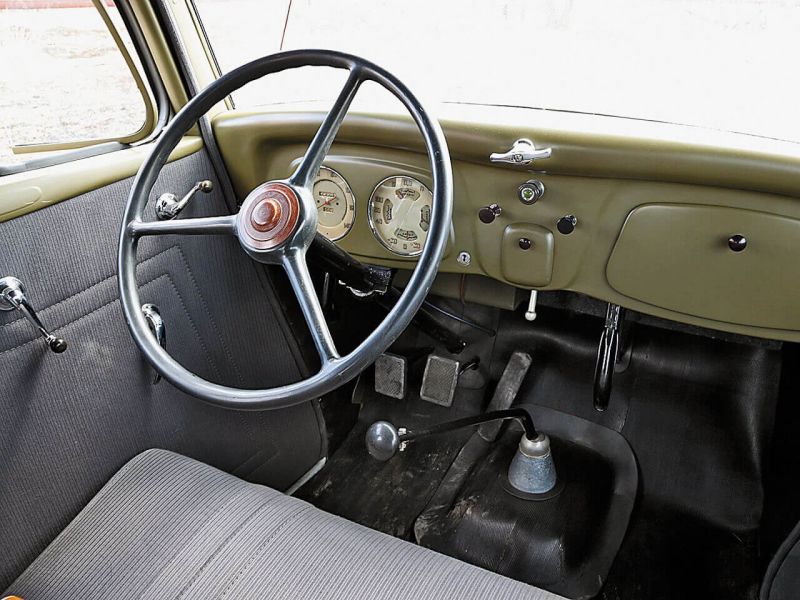 On the left there is a speedometer with the maximum value of 140 km/h, but it is clear that nobody spoke about such speed. There is a kilometre counter. On the right, there is a fuel, oil, water and ammeter sensor in a round frame. Everything is quite clear and the data is easily readable.

On the right there is a place for the ignition key socket. And even to the right you can see a small glove compartment. On the floor there is a lever of 4-speed manual gearbox, and the transfer gearbox is activated by means of the lever under the front panel. The door cards on top of the metal were covered with fabric upholstery.

The air vent on the front door can be opened, which also applies to the rear window. Both the front and rear sofas are very soft, which are not inferior to home sofas. There is plenty of free space above the head and in front of the feet. But if we compare with the current cars, the interior turned out to be a bit narrow and quite simple. On the floor you can see a transmission tunnel. The salon has almost no plastic.

In order to drive this all-wheel drive sedan, a four-stroke six-cylinder carburetor lower-valve engine with a volume of 3.48 liters was installed, which produced 76 horsepower. This engine was made of cast iron. Its power and torque were enough to overcome the impassability and even carry military trailers. Fuel consumption was declared at the level of 15 liters per 100 km. The maximum speed was 107 km/h.

Synchronized such a powerful motor with a 4-speed manual gearbox. The clutch is a single disc dry semi-center clutch. 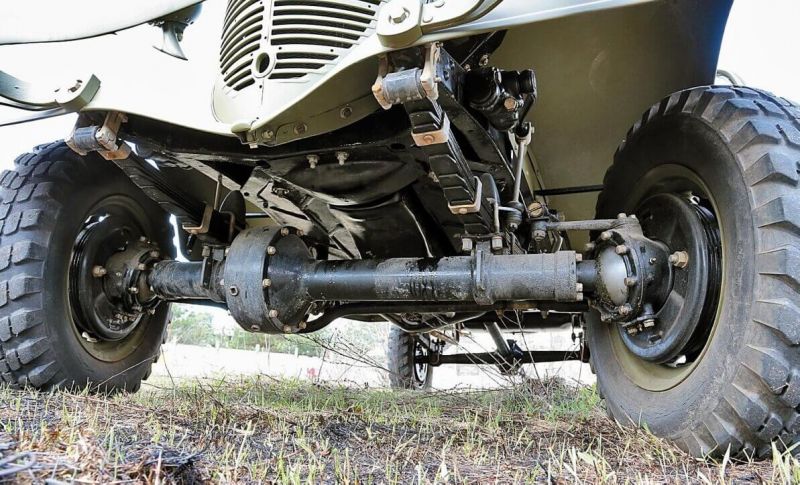 Both front and rear suspension was dependent, with cross springs installed. Installation of the front axle, unlike the rear one, was almost the debut work (for the first time at the Gorky Automobile Plant). Initially Rzeppa’s SHRUSEs were installed, and later Bendix-Weiss was delivered. The height of the ground clearance was just impressive, it was a real SUV – 210 mm.

The braking system used was drum brakes, which were heavily loaded, as the car weighed about 2,000 kg.

Summing up the results of GAZ-61, I would like to say that the design staff managed to make a real breakthrough in the world in such a short period of time. To make the first all-wheel drive sedan with the increased road clearance, which was almost not afraid of anything, it cost a lot of effort. It is clear that it is possible to speak about absence of due level of comfort, in fact transported high-ranking people of the USSR, but it is not necessary to forget in what time created the given car.

It was important to make it quickly, and so that it could get to a place where most cars could not reach. For this purpose, a powerful for those times power unit was installed, which perfectly combined with a 4-speed gearbox and four-wheel drive system. Moreover, the engineers provided for the possibility of transportation of military equipment. 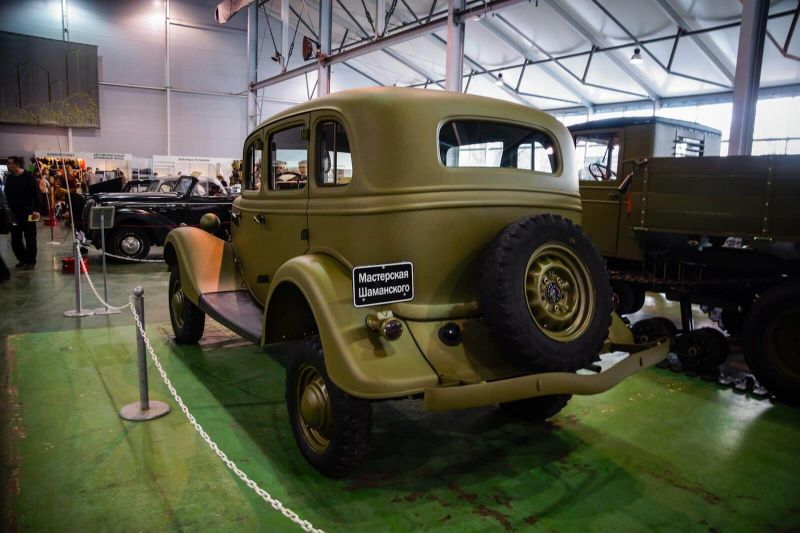 Therefore, this model was very much in demand, as it could still bring in ammunition, as well as personnel. Except, especially in winter, there was a lack of a heater. There were only three models of the body – sedan, pickup and phaeton. But because of internal problems and reconstruction of the Gorky Automobile Plant to other automobile models, the production of 61st make was stopped.

In such a short period of time the sedan became a real celebrity, because they were used by marshals and even by the hero of the Soviet Union. Today GAZ-61 can be found restored in some places, because very few copies have survived to our times. 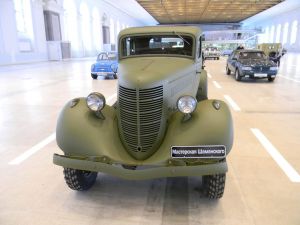 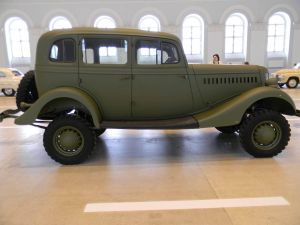 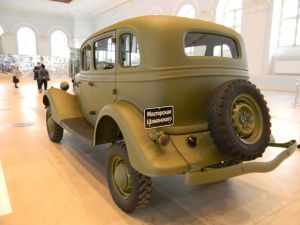 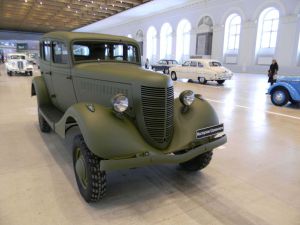 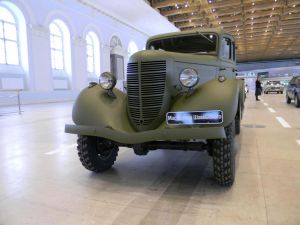 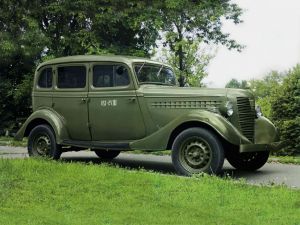 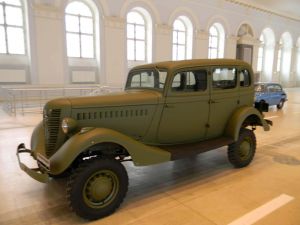 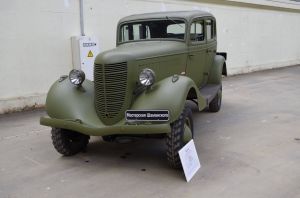 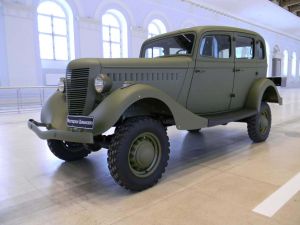