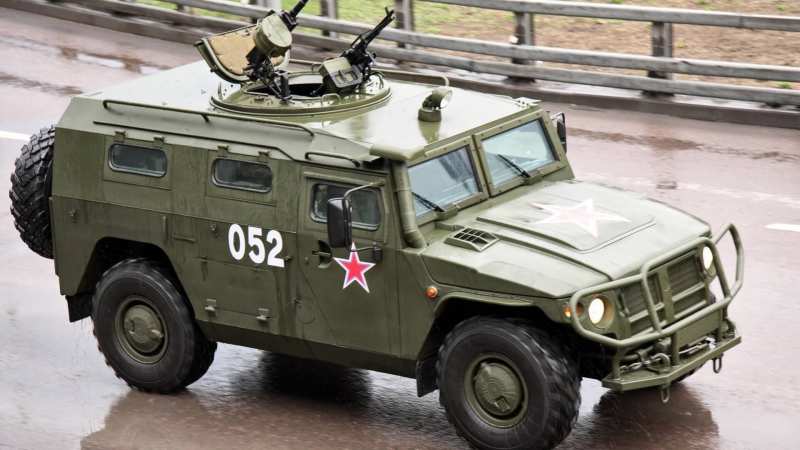 GAZ-Tiger is a multi-purpose off-road vehicle developed by the Russian concern Gorky Automobile Plant, which was launched on the consumer market in 2002. The model turned out to be so successful that after the release of its army version – GAZ-2975 Tiger, where there is an armored body and laminated glass that can withstand a direct hit by a bullet.

It is very unusual that the vehicle was developed under the order of the United Arab Emirates, but following the order, they began to produce for the Russian consumer market. The whole model range is GAZ.

The prototype version of the machine was launched in the late 1990s. It was based on the family, which was able to recommend itself (for example, BTR-80). When the middle of the first decade of the new century passed, the car was interested in the Russian department of the Ministry of Internal Affairs, after which, it went into mass production.

Serial production of the unusual vehicle was mastered by the Armavir Machine Building Company, which continues to produce these off-road vehicles to this day. There is a lot of video of how this vehicle works.

The multi-purpose vehicle was ordered by Bin Jabr Group Ltd (BJG) of the UAE. They allocated about $60,000,000 for development and prototyping.

The end user was King Abdullah II Design and Development Bureau (KADDB). It belongs to King Abdullah II of Jordan. The project was executed and coordinated by GAZ’s subsidiary, Industrial Computer Technologies CJSC.

The debut versions of the Tiger HMTV model were presented in Abu Dhabi at the International Defence Exhibition IDEX-2001. The developers were tasked with designing a machine that was easy to produce but reliable in use and that could easily cope with the harsh conditions in the desert, as the Hammers were often out of service. 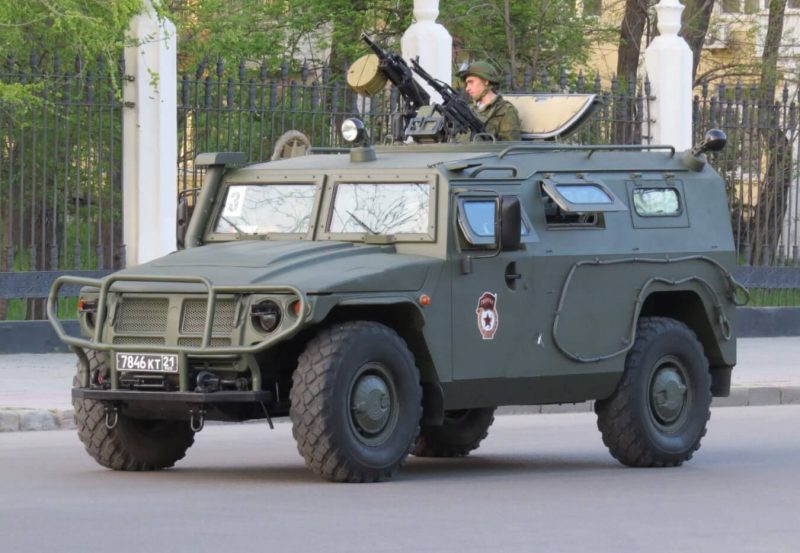 They handled it. Hummer was taken as the future armored vehicle, and several Russian factories were involved in the project. In the shortest possible time they were able to fulfill the order – they developed an armored and unarmoured version of the vehicle.

The produced version was named GAZ-2975 “Tiger”. The machine received the used units together with components of BTR-80. We also decided to take something from the armored vehicle “Vodnik”.

The tiger is not afraid of any obstacles on the road and is simply designed for off-road movement. The model was also designed to operate in desert areas where there is a very high temperature.

The buyer liked the machines, but in the end, the documents for the delivery of the model were never signed. But in Jordan, in Al Dulail, the joint Arab-Jordanian company Advanced Industries of Arabia (AIA, 80% of shares at BJG) decided to start producing similar Nimr armored vehicles in different versions starting from summer (June) 2005.

Therefore, the Gorky Automobile Plant has a car that has been developed and ready for mass production. The company assembled several models of the 2nd series, where there was a different appearance and interior. Just these models under the name GAZ-233034 “Tiger” were demonstrated at the MIMS-2002 exhibition. 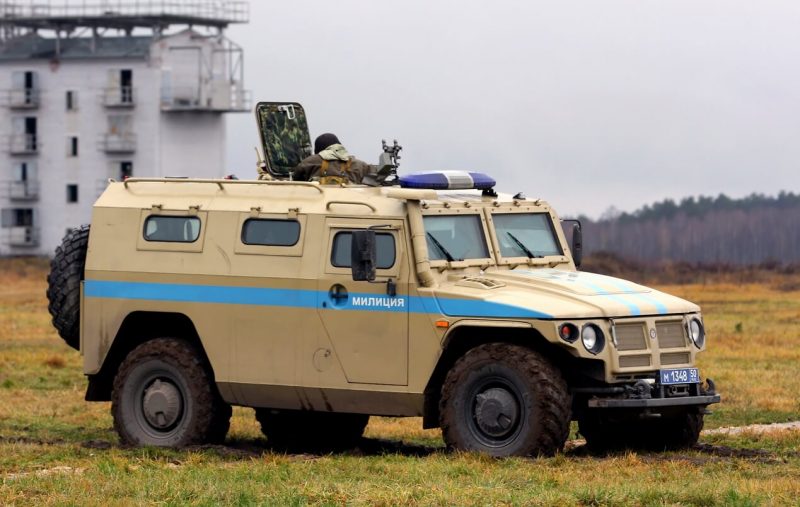 Following the fact that a couple of prototype cars came to the Moscow branch of Sobria as pilot operation, the vehicle became interested in the management of the Ministry of Internal Affairs of the Russian Federation. Later, it was the Ministry that became the customer of the Tiger. Vehicles were put into serial production at the Arzamas Machine Building Plant, where they are still manufactured to this day. The Gorky Automobile Plant no longer produces Tiger cars.

It has been demonstrated at many exhibitions how the model with a civil version can easily climb on the ground, the angle of which is 45 degrees. In addition, the suspension is independent, which allows each of the wheels to descend and climb, depending on what is on the other side of the axis. Thanks to this, the vehicle can overcome almost any obstacles, which can be attributed to various cobbles and pits. And the four-wheel drive system allows the machine to get out of a deep mud pit.

At the beginning of September 2006, the experimental upgraded Tiger 2 was presented, where was the Steyr engine, whose power reached 190 horsepower. If we talk about the equipment of the walk, it was decided not to change it. It, as well as the army version, provided for a system of pumping tires and pressure control in them. The cost was left at the previous level – from 120 thousand $, depending on what will be chosen equipment. 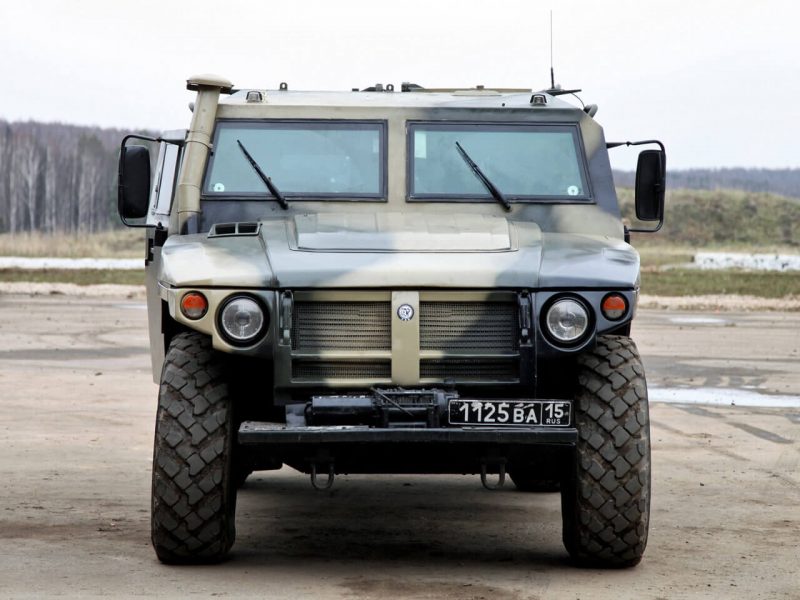 The army version of GAZ-2330 Tigers had an improved technical component in the direction of improving the security of the main components of the car. Thanks to this, it is almost impossible to damage the car, because in terms of protection it is only slightly inferior to Hummer from America. And the latter, for a second, is considered one of the best vehicles for the army.

Only on the Russian SUV the price list is almost 3 times less, which is one of its main advantages. The next year (2007), GAZ-SP46 Tiger was presented, which was also a derivative of the standard GAZ-2330. Among its differences are its very attractive appearance and special protection status, which has not been disclosed to journalists. 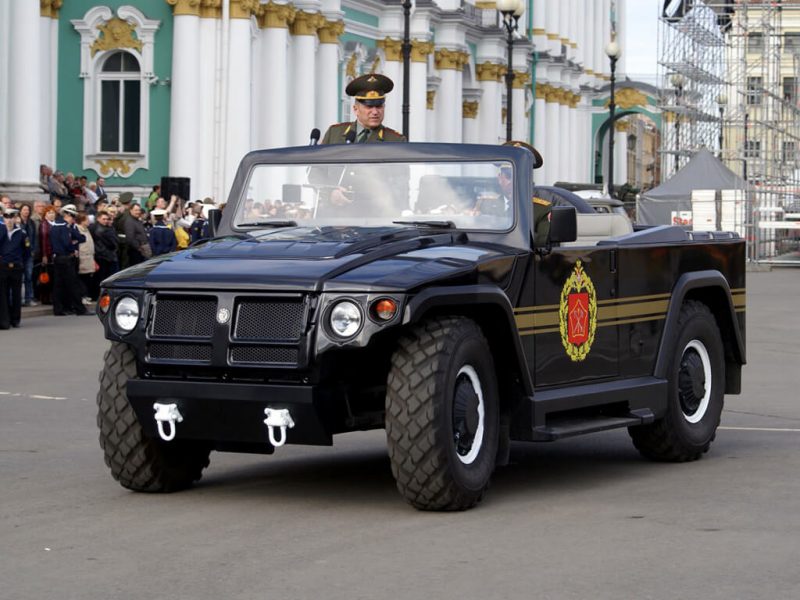 The car was also used for parades and other purposes that were not specified in the main documents. It is clear that the last modification of the Tiger was not sold. Only a few such vehicles are currently registered with the State Duma and the Presidential Executive Office of the Russian Federation. They were to be purchased for the United Arab Emirates, but were refused sale. The technical component of the model is still unknown.

There is also GAZ-233034. The car is a modification of the civil version of the Tiger, but it was made for the needs of the police. It has a third class of ballistic protection, as well as the presence of special fences in the armored windows, through which it is possible to target. 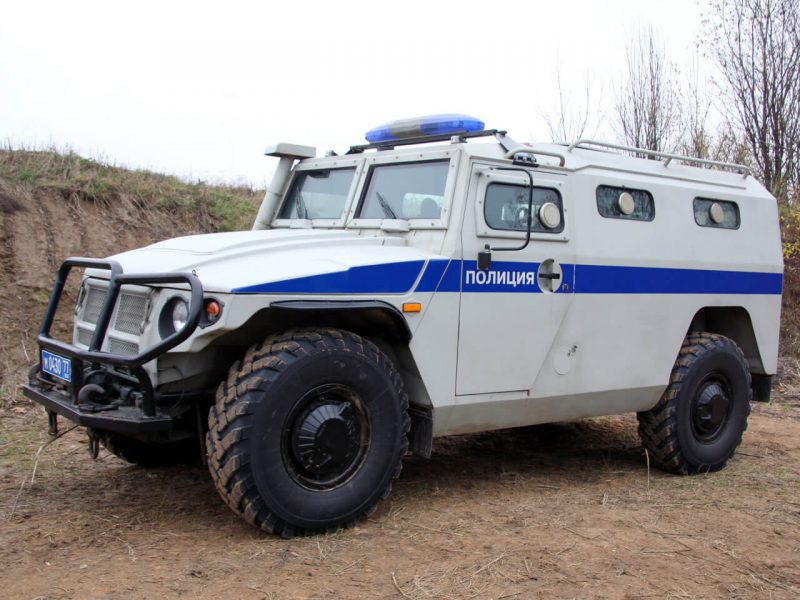 Such a vehicle had a hatch through which the crew could fire with their own weapons while driving. This version also had the option of installing a block-raiser to ensure communication with the control room. A little later, in Tiger 2, additional equipment was installed, which is used in law enforcement agencies. The body of the 2nd Tiger and its other modifications, except for the SPM-2, was made of rolled armored sheets, which were thermally treated.

Their thickness was 5 mm. This was enough to give the body resistance to Kalashnikov’s bullets. It is also very important that the body itself is detachable, and in order to carry out a quick repair or reach the necessary units, it does not require much effort. But this method is very important, because from the very beginning the car was focused on the application in the combat zone. The SPM-2 version had a body thickness of up to 7 mm.

A little later, when the Nimr vehicles (mentioned above) were produced by AIA, the body thickness was already 9 mm in some modifications. Of course, the free sale of these models was not even implied, as they were used only to transport the first persons of the states.

What opportunities did the civilian version have

The civilian variation of the vehicle was created in 2009 on the platform of the standard army variation, where all the technologies that were intended for military vehicles were applied. It was specially designed for those customers who need a reliable off-road vehicle to transport people and various loads in hard-to-reach areas. 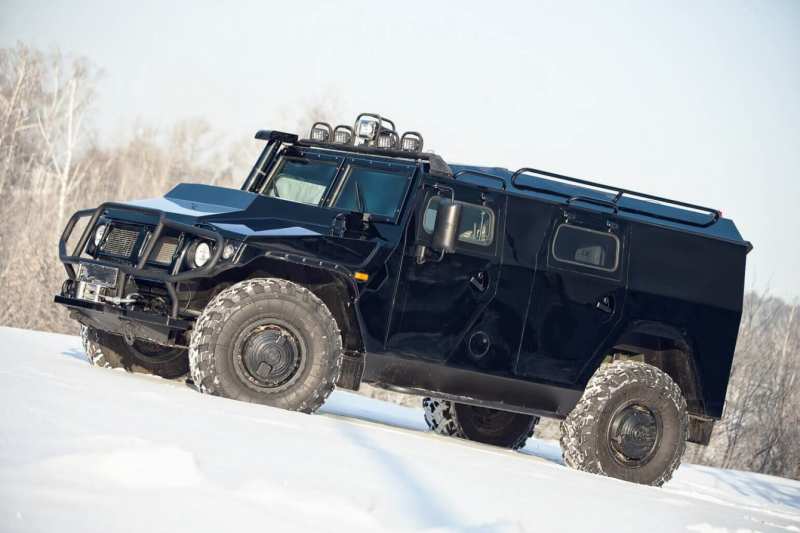 The prototype version of the car is distinguished by the presence of an unarmoured aluminum body, increased payload. The interior of the Tiger has also been improved. Due to the fact that the model had good cross-country ability, level of comfort and acceptable price, it is popular not only with oil directors, but also with hunters, fishermen and tourists. 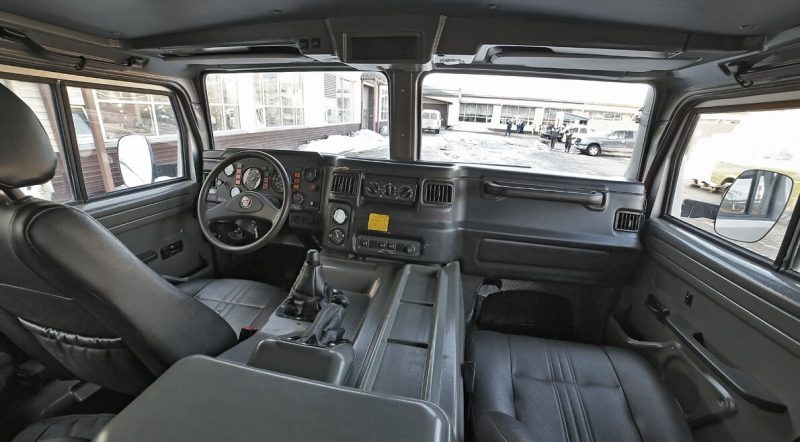 The car was equipped with a spacious luggage compartment with a ladder on the back door. The roof was equipped with an electric hatch, and leather and suede were used for interior decoration. Moreover, the Tiger has electric adjustment of the front seats and a rear view camera.

The traditional Tiger had a 205-horsepower diesel-powered propulsion system in place. Interestingly enough, the Tiger-2 version already had a 195 hp engine. It managed to reduce not only its power, but also fuel consumption – only 22 liters per 100 km.

However, it did not prevent it from accelerating up to 100 kilometers per hour quickly enough – in 32 seconds. The first version of the Tiger already consumed all 25 liters per hundred, although even this result is considered economical. 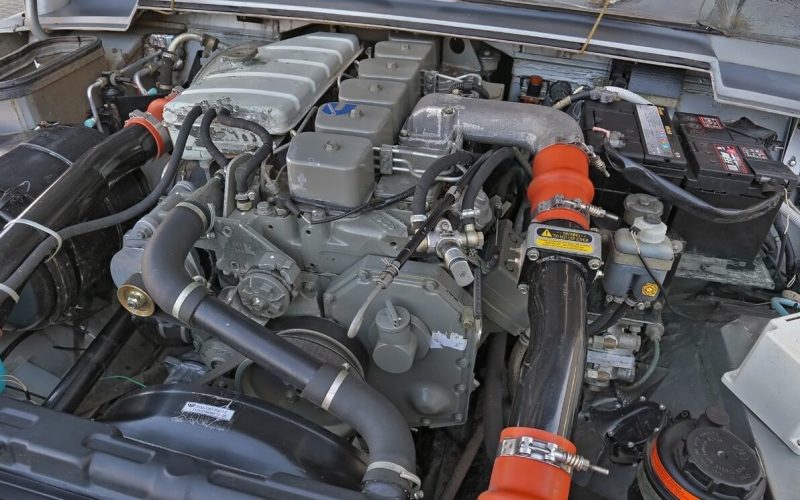 A pair of fuel tanks with a total capacity of 136 litres was to be installed. Power units could continue to operate in almost different conditions, despite the fact that it was a 30-degree cold or 50-degree heat. To keep the engine cool, a large liquid-cooled radiator was installed. Maximum speed was 160 kilometers per hour, but it could be achieved only under approximate conditions.

In practice, most often, the car did not drive more than 127 kilometers per hour, being at the same time minimally loaded (only 2 crew members). Some models had an engine of the famous American company Cummins B-180, Cummins B-215. It is easy to guess that the first one had 180 horses and the second one had 215 horses. Both engines had a working volume of 5.9 liters. The YaMZ-534 engine is also used.

The car with the most standard equipment has an independent torsional suspension on all wheels. It is complemented by energy-intensive two-pipe shock absorbers. Torsoes are mounted inside the frame spars. It also received a good payload – up to 1 500 kg. The capacity of passengers can reach 10 people.

In order to easily drive such a difficult and heavy vehicle, the designers provided hydraulic power steering.

Buy GAZ-2330 “Tiger” can be both new plan and handy. The new model will cost not less than $91939. And the price can vary greatly depending on the chosen modification and equipment level. The secondary market can offer buyers models in the price category from $53631 to $76616 $. 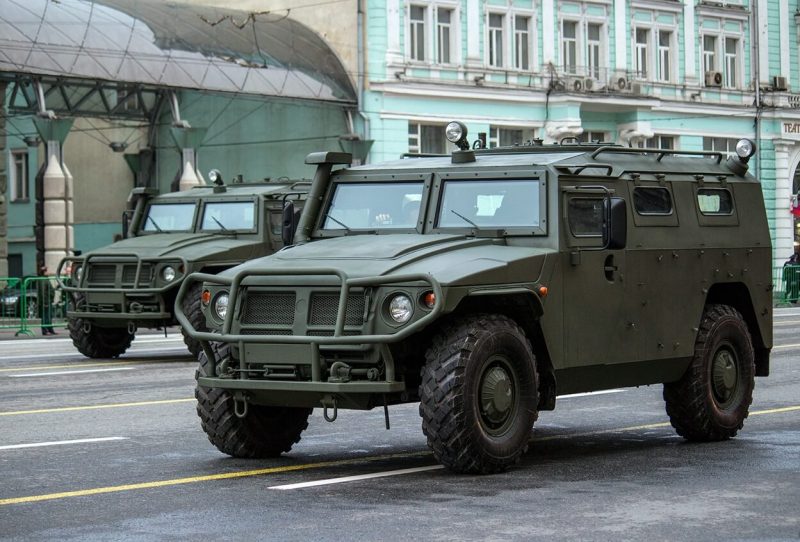 The administration of the Gorky Automobile Plant believes that large orders for the GAZ-2330 Tiger will come from different military companies. To tell the truth, this car is exactly what they need. In fact, the military is often located where there is simply no good road, but only fields, dirt and lack of roads.

And for the Tiger it is his native element. He easily crosses all the roughness and big holes, and at the same time he feels a soft suspension. Moreover, the model would be perfect for transporting cargo or civilians to hard-to-reach areas in different military positions.

Inside the machine is very free, there are powerful power units, various modifications, all-wheel drive system, tire inflation function. All this can be useful not only for the military, but also for those who love hunting, traveling and fishing. An installed (optional) winch will help you to get out of here, stuck somewhere. Of course, inside simple versions (not tuned) the quality of materials and the level of ergonomics suffers considerably. 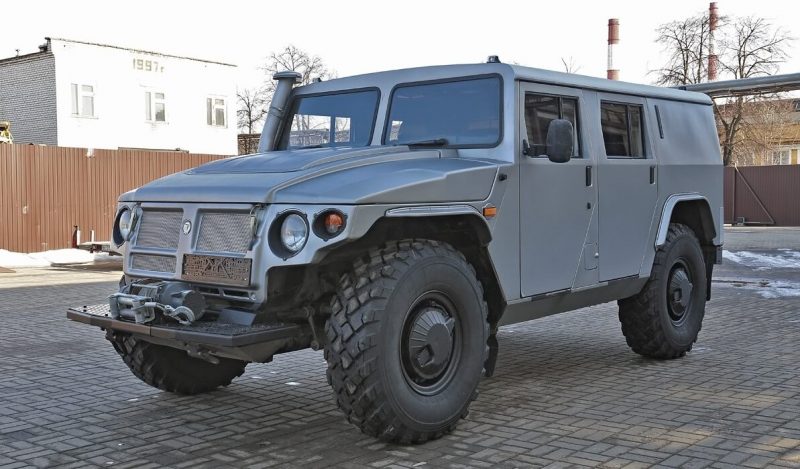 What’s surprising is that it’s quite acceptable fuel consumption with such an engine and such mass. Yes, and the cost of the car bites a lot. For this money you can take a pretty good imported SUV, in which you will feel much more comfortable.

However, if you love the domestic car industry or you are attracted by the complete lack of roads and extreme, then GAZ-2330 Tiger is created for you. When placing an order, you can choose a model for your needs, but the price will be clearly higher than the starting one. 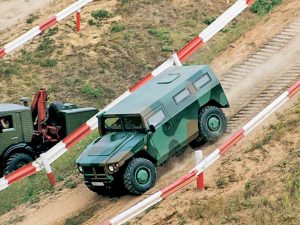 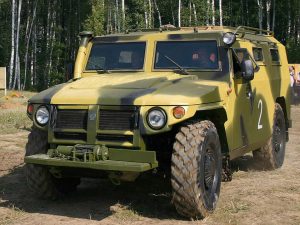 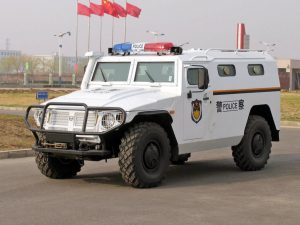 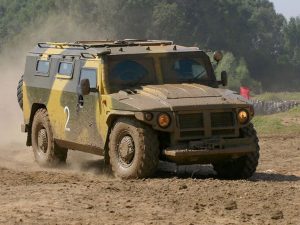 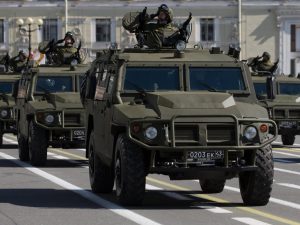 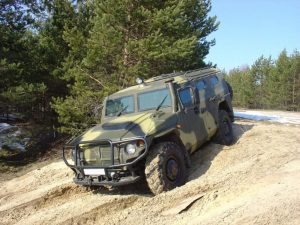 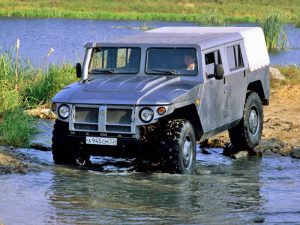 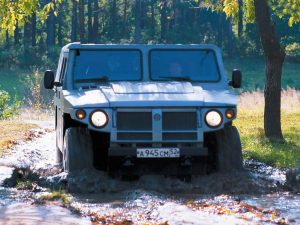 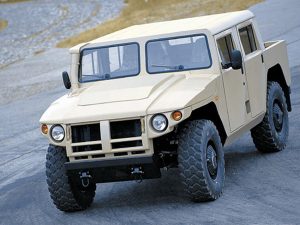