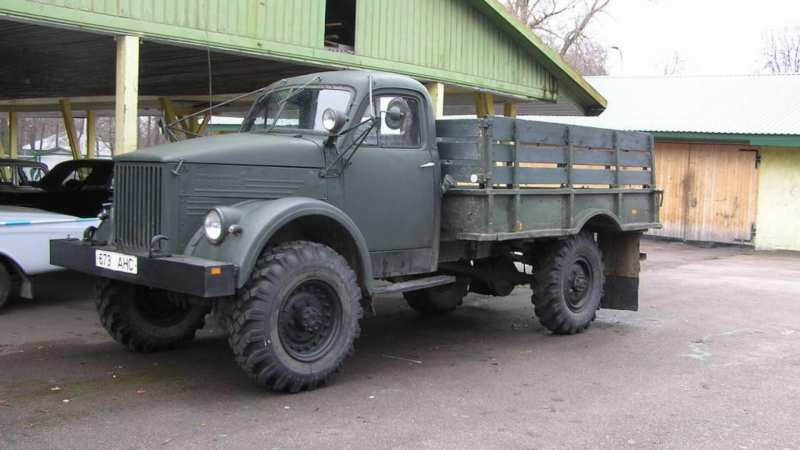 GAZ-63 is a two-axle truck, which was produced in 1948. It was a variation of the popular national and utility GAZ-51 truck, and was also able to replace the pre-war three-axle GAZ-AAA truck. The model was used by military drivers on a good account, because it was adapted to the difficult military conditions of operation. It also served as a standard platform for the APC-40. The whole model range is GAZ.

The design of the machine started in 1938. All known “lorries” are already morally and technically outdated and need to be replaced. Because of this, as soon as spring 1938 came, the design staff in Gorky began to develop a new truck, and to be more specific, a whole family of trucks with increased cross-country ability, which could be used in difficult road conditions.

The debut prototypes of the 63rd model were created before the Great Patriotic War in 1939 and 1940, but began to be produced in series since 1948. It was the most massive all-wheel drive machine of the Soviet Army, as well as the national economy of the Union of Soviet Socialist Republics in the period 1950-1960s. In this article it will be possible to find out the size of the machine, to find out information about the engine. 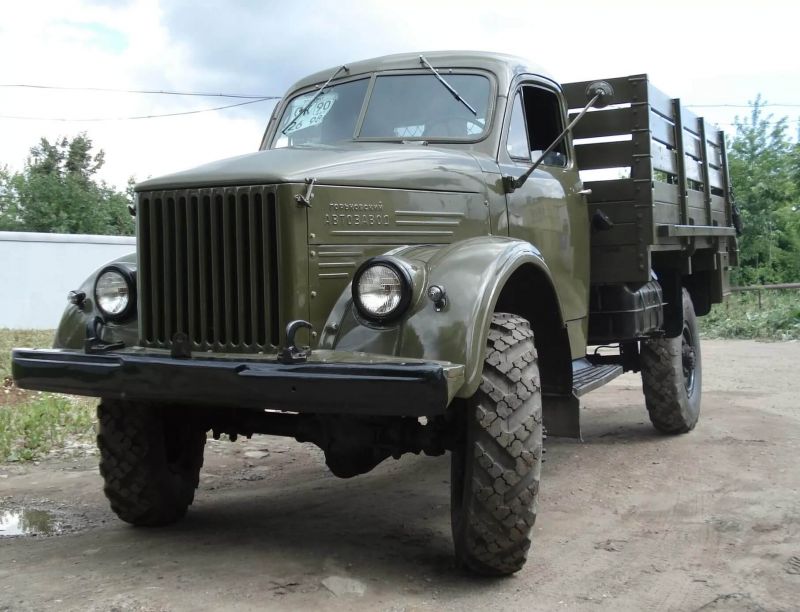 A trial version was built as an experimental model in 1939 and put to the test. Since during the development of the fresh car the main attention was focused on its cross-country properties, the unique external properties of the off-road car did not differ. As a cabin, the prototype had an already available version from the lorry. However, it was not so important, because the walking was original.

The 63rd model became the debut truck with increased cross-country ability, where there was a 4×4 drive and single tires. Simultaneously with the development of the off-road version of the Gorky Automobile Plant, work began on the design of the civil model of the GAZ-11-51 truck (as GAZ-51 became GAZ after a while). It is noteworthy that many spare parts of the lawn-63 were unified with it. 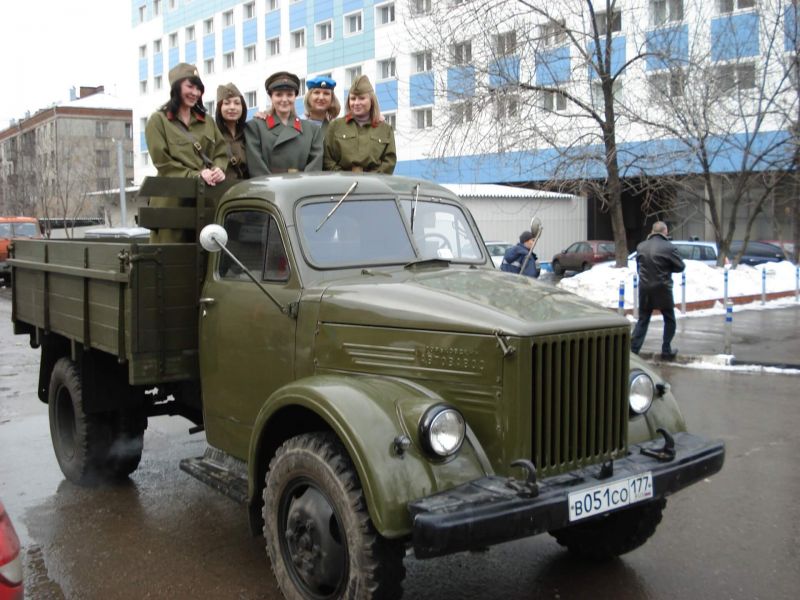 As a result, the main components have become similar and new machines have been made much cheaper to produce, the operation has been simplified and, importantly, a common conveyor has been used for their production. Some of the design developments and technical solutions used on the 51st and 63rd models were revolutionary for those years.

For example, compared to pre-war vehicles, the new trucks had a completely different layout – the powertrain was installed above the front axle, which allowed to increase the payload of the vehicle, while reducing their length. The braking system was hydraulically powered.

The GAZ-63 truck was very similar to the American version of the truck, even despite the changes in design.

Despite the successful implementation of all the tests and recommendations for release, it was not possible to set up their production in the early 1940s – all the blame for the beginning of the Great Patriotic War. Works on the design of successful machines were continued in 1943, after the Russian troops drove the Germans to the west.

It is worth admitting that by that time from the designed in the pre-war time of the machine remained only indexes – the wartime has made its own adjustments, and a few years later, scientific and technical achievements have gone forward. Moreover, the design staff of the automobile plant was able to “get acquainted” with all-wheel drive trucks, which were produced in America.

These were Studabeker and Chevrolet. In wartime, they were produced here at the Gorky Automobile Plant under the Lend-Lease. It is clear that the engineering staff simply couldn’t miss such a chance to take some parts of the design work from their American colleagues. But the main units were designed only by Russians, or they were improved by those already present.

Experienced batch of new all-terrain trucks, which were ready for various tests, were made in 1945, after the machines were approved by the country’s leadership in the person of Stalin and party leaders. Conveyor production of the 63rd Lawn took place only till autumn 1948, which is a couple of years later than GAZ-51.

This all-terrain vehicle with increased technical characteristics and excellent cross-country ability could be appreciated by the Soviet Army. GAZ-63 could not be afraid of the viscous soil, ford, the depth of which was up to 80 cm, almost half a meter of loose snow cover, 70-centimeter ditches. The model was actively used for transportation of army personnel, as a tugboat of military guns and for installation of various military installations.

The truck was a very good assistant, because it was not afraid of impassability and could transport, in addition to its own cargo, trailers weighing up to 2 tons. 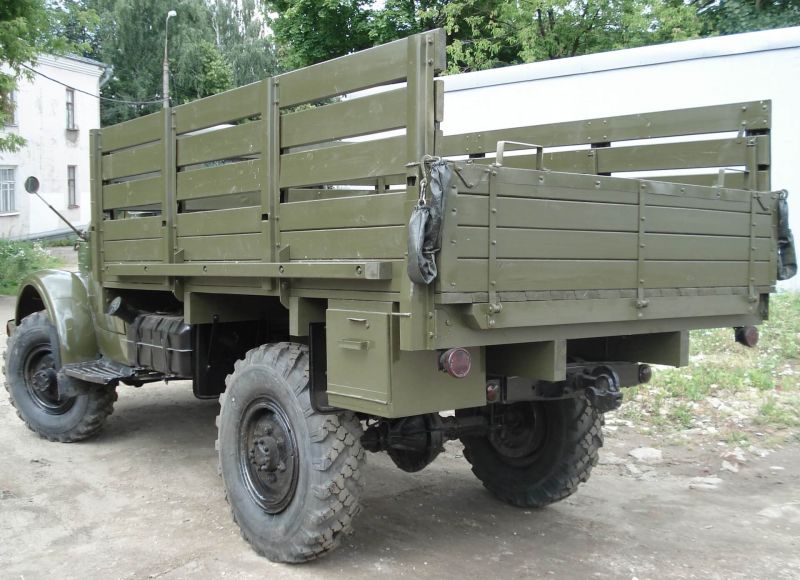 The sixty-third model of the national economy has also found its own application, but the lawn has not been used as often, and to a greater extent in rural areas. When the war ended, the number of trucks was very small, especially in a remote area, and the need for cargo transportation was simply catastrophic, so considerable overloads were considered normal. It is clear that few people could doubt the reliability of the design of the trucks, but with the increase in the load the cross-country ability of the trucks was greatly reduced, for the sake of which, in general, GAZ-63 was created.

Moreover, the parts began to wear out more, and to carry out timely maintenance of vehicles in rural needs, as it was done in the army, was difficult. All-wheel drive system on rural roads was very timely, but the advantages of the model with only rays caused many questions. Some of the drivers themselves modernized the car, and after a while, the plant began to produce modifications with paired rear wheels. Also one of the drawbacks could be called insufficient stability of the truck. 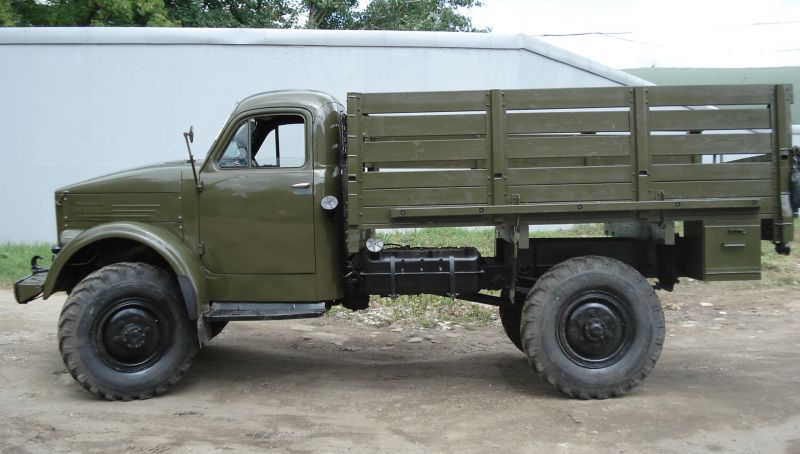 The all-wheel drive version of the lawn had a narrow track and a high bodywork (270 millimetres high), so that drivers could often “lay” the car on its side, entering the corner at higher speeds. Then in 1968 the model gave way to a new car – GAZ-66. The percentage of standardization of the car with the famous GAZ-51 was 80%. The total circulation of produced cars was 474,464 copies.

The cabin of the new lawn of 1943 from the American trucks US-6 was almost not distracted by anything. There was also a shortened hood, rectangular L-shaped wings, and a protective grille in front of the headlights. Many could even often confuse these two cars.

After a while, the final version was presented, which was similar to the cabin of the 51st model, which had rounded wings and mounted in them massive round headlights. But, despite the changed appearance, the improved Soviet cabin was still similar to the prototype from America. 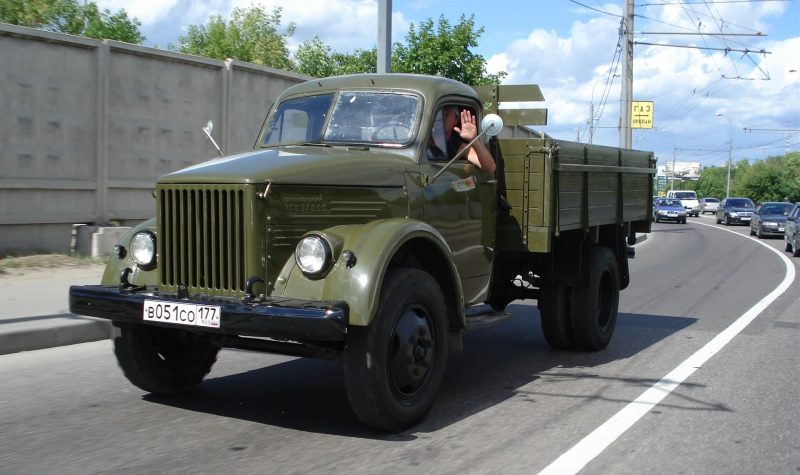 Initially, the lawn cab 63 was made of wood, because in the USSR there was a significant shortage of sheet metal. Only in 1950 the cabin was combined – wood and metal, where only doors were made of wood. Only 6 years later, the cabin was made of all-metal, because only then the national economy was slightly restored from the destruction caused by the war.

The 63rd model of the military vehicle was equipped with a wooden universal body, which had high lattice side boards and front wall. Inside there are folding benches of longitudinal type. The tailgate was made with the possibility of opening. There were special sockets in the side walls, in which it was possible to install arches for the subsequent tensioning of the tent.

It is clear that few people enjoyed driving this “hard” car, but, as they say, to go much better than to go, especially for a soldier. According to the passport, the car could take about 1,500 kilograms on the dirt road. The modification of GAZ-63A and GAZ-63P already had 2,500 kilograms. GAZ-63 also towed trailers weighing less than 2,000 kg, which significantly increased its functionality. 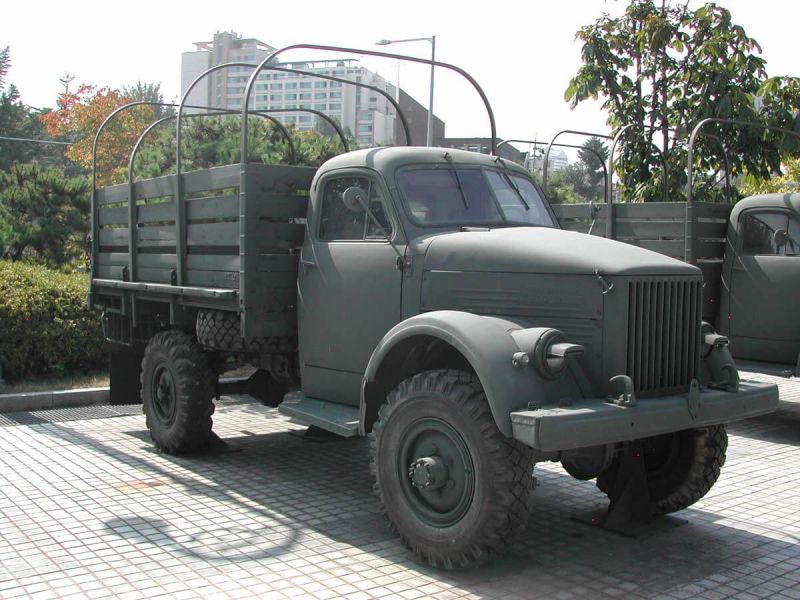 Based on the requirements of the military leadership, the design staff increased the capacity of fuel tanks. As a result, the main ninety litre tank had an additional 105 litre tank, which made it possible to bring the fuel volume up to 780 kilometers with full load.

The cabin was a two-seat cabin. There was not much free space inside the car, and the heater was installed only after 4 years, when they began to produce the car in mass production. The driver’s seat was not adjustable and was quite simple, but not rigid.

But what else can be demanded from the army SUV of such a year of production. In fact, at that time, little thought was given to comfort, the main thing was to make a technically well-equipped car, and so that it could pass almost everywhere, as far as off-roads are concerned. Many models had an iron torpedo, which could be found on the left side of the three-spoke large steering wheel. 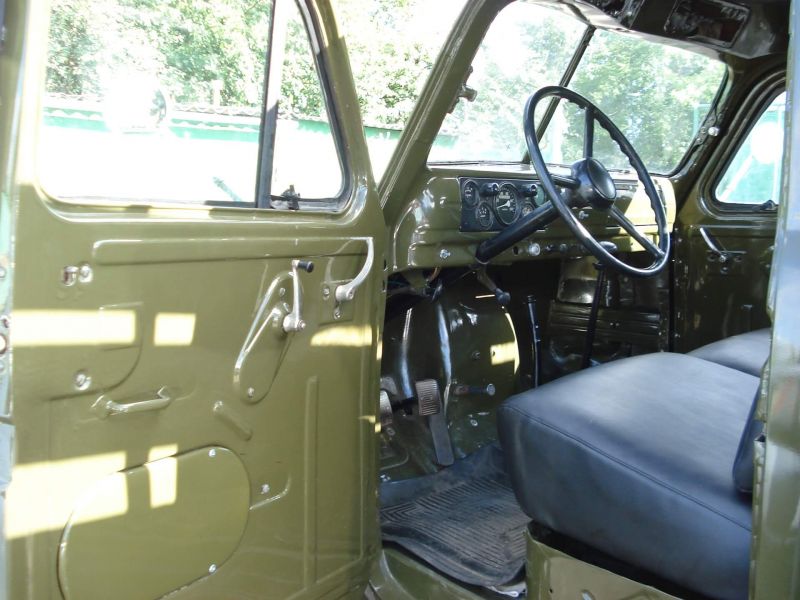 It was followed by an instrument panel with a speedometer numbered up to 100 km/h in a large circle. The left-most part of the dashboard had a fuel level sensor and underneath it was an oil level sensor. To the right of the speedometer there is a water temperature sensor and an ammeter. There is even a place for a glove box where you can put all the necessary things. The windshield was divided into two parts.

The Soviet car was powered by an engine from the 51st Lawn. It was a six-cylinder carburetor lower-valve engine. It had a volume of 3.5 liters and produced up to 70 horsepower. The engine was liquid cooled. The maximum speed was 65 km/h.

This power unit was synchronized with the manual four-speed gearbox. The clutch was single disc dry. The transfer gearbox has a pair of stages and a demultiplier, which was equipped not only with a lowering speed, but also a straight speed to reduce fuel consumption on highways.

The steering device has a globoidal worm mechanism with a double-rowed roller.

The cost of the Soviet off-road truck GAZ-63 is not high. The price list starts at $913 to $6849. The price will depend on the year of manufacture, the condition and availability of spare parts and assemblies. Some modifications were made with a powerful winch, which allowed the vehicle to leave hard-to-reach areas, and also helped to get out of the ditch, as sometimes the vehicles were turned over at the speed of turning. 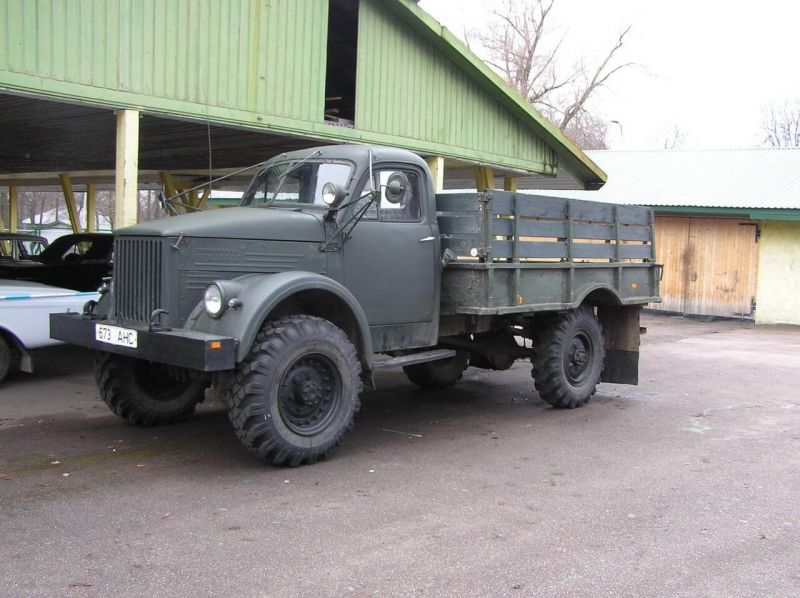 The car has become an indispensable assistant during the fighting and also in agriculture. It did not have a large size, so it could move mobile even in urban areas. Since there were no roads as such in those years, and there was no time and raw materials, because the world was on the brink of war, the car felt great and off-road. Partly due to the high ground clearance, all-wheel drive system and good off-road tires. In addition to transporting people or goods, the vehicle could transport trailers weighing less than 2,000 kilograms. 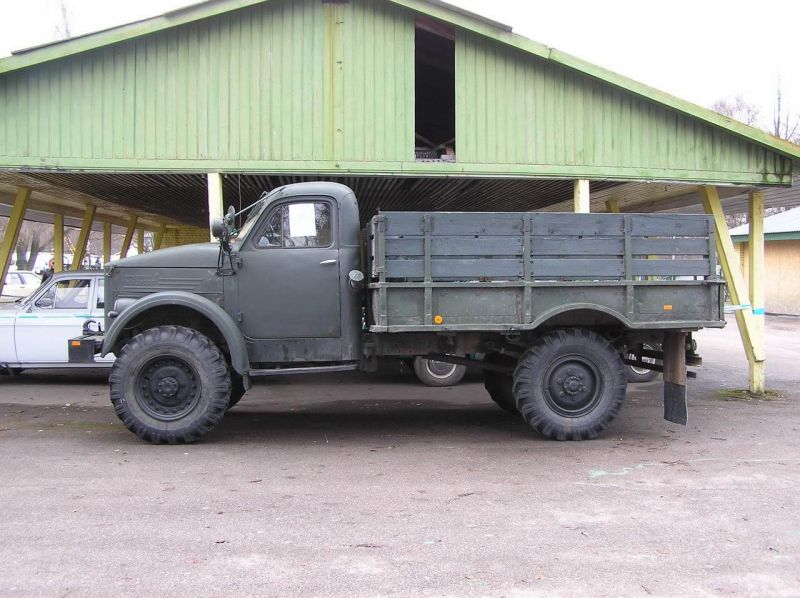 Everything inside the cabin is very simple and there is not even a hint of comfort, which at that time, in principle, was not necessary. The first models of heater, hydraulic power steering and braking system were missing. The powertrain was not very powerful, but it performed its task perfectly.

Some modifications even had a winch, which could pull the car out of the ditch, or if the truck was stuck. Despite the noticeable similarity with the American truck, the workers of the Gorky Automobile Plant worked well, making an indispensable assistant for military and agricultural needs.

We advise you to read the article: Dream car: how “Volga” was hardened 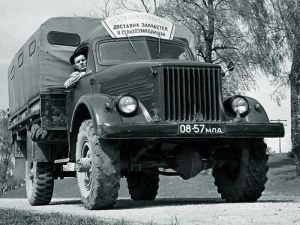 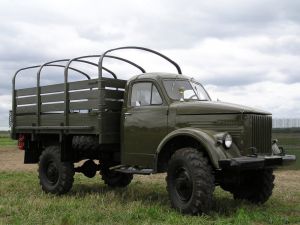 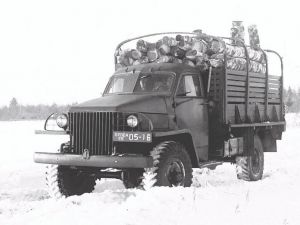 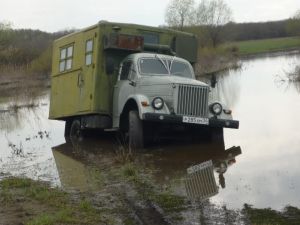 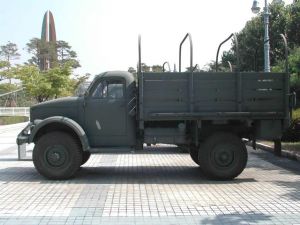 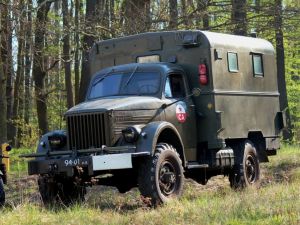 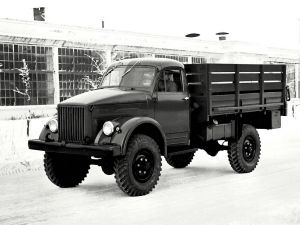 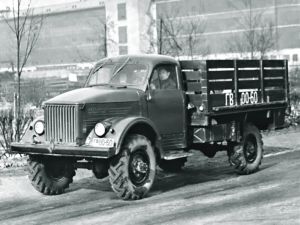 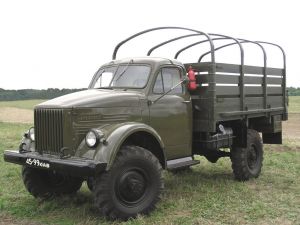