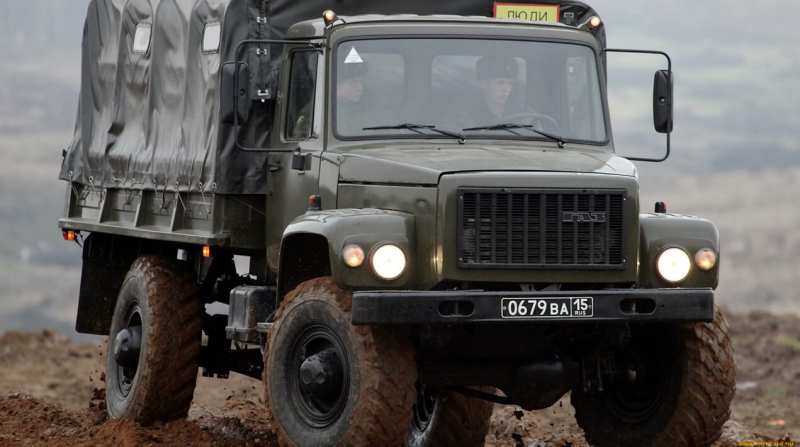 GAZ-33081 “Sadko” is a durable medium-duty flatbed truck, which replaced the famous GAZ-66. For the first time the model has been on the domestic roads in the winter of 1997 (December), and since that time has managed to disperse a large circulation, which allowed it to become a real leader in its segment.

This vehicle, which left the GAZ conveyor in 1996, was a response to the demand for industrial capacity by a four-wheel drive truck with increased cross-country ability. It had a modern level of operating comfort. The whole model range is GAZ.

Today, the GAZ-Sadko truck moves in almost all climatic regions of the Russian Federation, it works in geological survey, in the Ministry of Internal Affairs and Armed Forces, as well as it is used for public utilities and farmlands. In fact, there is no road where these off-road trucks can pass. In this article, there will be a full description of 33081 Sadko.

The success of the model is associated with the simplest and most banal action. The new machine was made a hybrid version, where the appearance, chassis and control of GAZ-3309 were combined with the contents of the popular at the time GAZ-66. As a result, a fairly modern car, for those years, began to acquire an off-road look.

The hybrid modification was deservedly appreciated, initially, due to the stunning cross-country ability, which is combined with an acceptable level of comfort. After a year of production, the SUV did not receive any distinctive changes. The 66th gave Sadko a four-wheel drive system, where there was a unique system of self-locking wheels, as well as clearance of more than 300 millimeters, and not having a function of pumping the wheels.

The latter was developed specifically by order of the Ministry of Defence of the Union of Soviet Socialist Republics. The pumping method was compressor-based, with powerful types of wheels that provided the required level of pressure, regardless of a few bullet hits. And from GAZ-3309 Sadko received a new spacious bonneted cabin, together with an extended chassis. 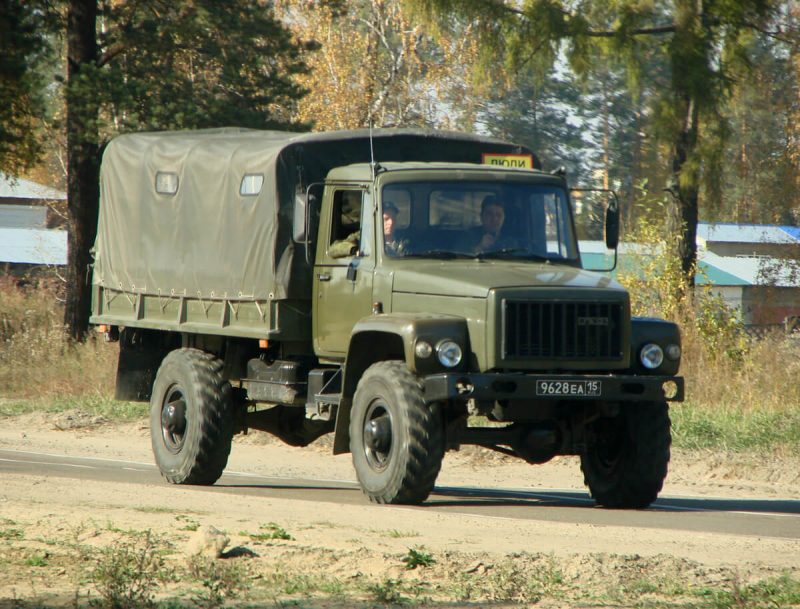 They tried to start working on the machine, which later received the name 3308, since the late 1980s. The point was that the already known 66th model was produced at that time about 30 years, and, despite all its advantages, it is quite outdated. However, there were a lot of claims to it too, especially from the military.

For example, the presence of cabover design, which is much more dangerous for the driver and passengers during the explosion of a mine under the front wheel of the truck. Also, the maintainability of the truck with a cab over the engine is much heavier than with a separate hood, because it is difficult to access the engine.

That’s why paramilitary units began to buy significantly less trucks, so the Gorky Automobile Plant began to focus more on civilian needs. The design itself was complicated by the fact that the poor and restless people of the nineties passed on the street. The enterprise almost went bankrupt at one moment, but stayed afloat. 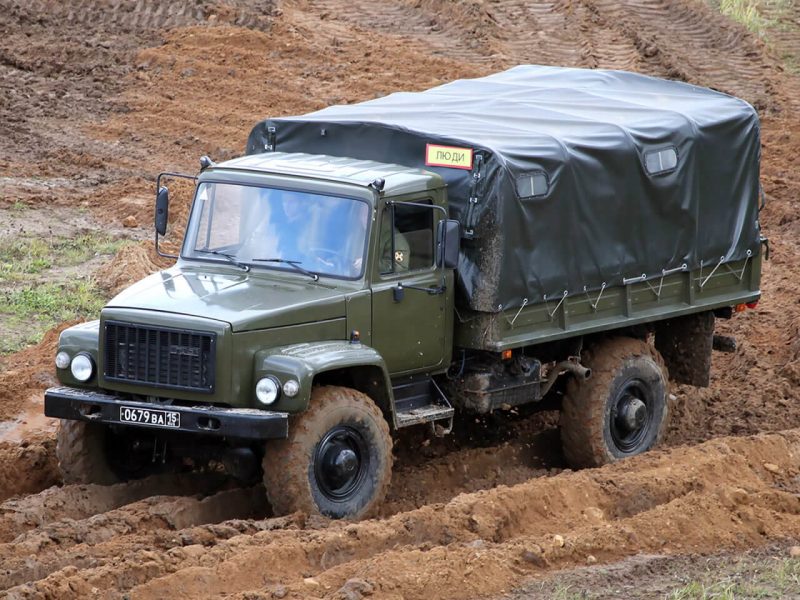 In 95, the Gorky Automobile Plant demonstrated its debut prototype of this model, which had the GAZ-3309P index. A couple of years later, the production of a new off-road type car began, although, to be honest, the production was small-scale. The designation was put in order, which allowed it to meet the standard, and the truck got the name Sadko, which was later adopted by the people.

Off-road characteristics and even the very appearance of GAZ-3308 Sadko allow its use in places where ordinary trucks simply can not pass. It is able to inspire confidence and reliability.

The car looks powerful, first of all, because of the suggestive ground clearance. Mass demand for the car is achieved thanks to the Russian army, the army of independent states, and the Ministry of Emergency Situations. GAZ-Sadko is also a popular vehicle among electricians of power lines, in geological exploration and mining industries.

And the main advantage of the off-road vehicle is that it can pass where another vehicle will just get stuck. And this can be attributed to the northern regions and remote regions of Siberia, which are difficult to reach. You can also find other models of this type of vehicles, such as GAZ Sadko NEXT.

If you pay attention to the cabin, you may initially get the impression that it is a full copy of the standard “Lawn”. But this is not quite true. Wings, which were placed on Sadko, are original, otherwise it will simply not be possible to put massive wheels in them. But this is all different.

Though it is necessary to admit that the changes were not pursued especially, because the more the percentage of unification, the less the cost price. On the sides, between the large radiator grille, there are headlights, and below them there is an iron bumper. The windshield windshield, as before, has a pair of windshield wipers that allow it to be easily cleaned. 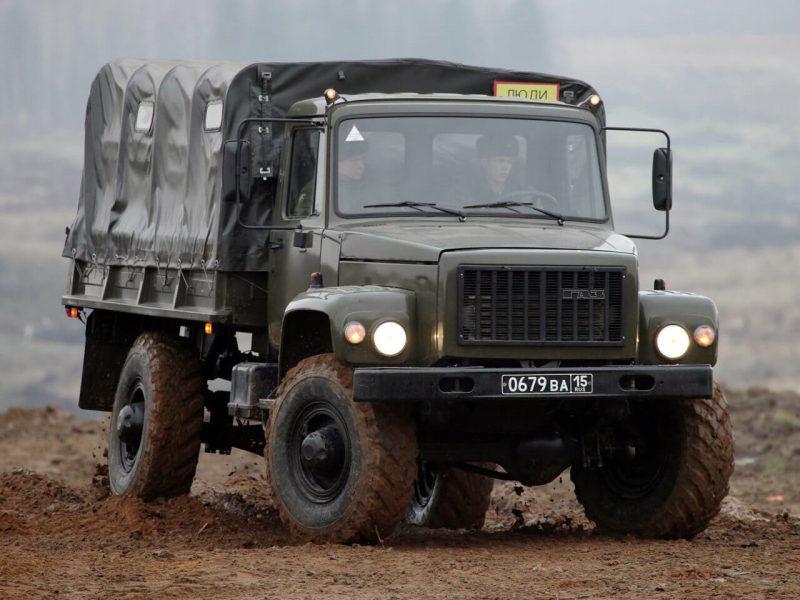 For convenience, the air filter is led outward and rises slightly above the cab. The all-metal cab has a simple and practical design, a pair of doors, almost panoramic glazing, a powerful metal bumper and a large hood, which provides easy access to the engine compartment.

In its class the vehicle turned out to be quite attractive, but there is nothing supernatural, because the manufacturer’s efforts have reduced the cost of production. Therefore, the plant decided to use forms with a minimum number of decorative elements of exterior design.

Surprisingly enough, the car turned out to be quite comfortable, even in the standard equipment. This is partly due to the spacious cabin, so inside you feel comfortable. As an additional option, you can buy a customizable driver’s seat, which will make the truck even more attractive.

The ascetic dashboard is quite comfortable, for example, the steering wheel is no longer covered by some of the devices that fit neatly into it. Installation of hydraulic power steering allowed to significantly reduce the load on the driver.

On the passenger side, the interior is not particularly distinguished, there is the same 2-seater sofa, but with the help of the size of the cabin it is quite convenient to move on it. It is clear that the level of comfort of “Taiga” modification, where there is a NEXT cabin, is much better, but it only draws attention to the fact that Sadko knows no boundaries of perfection. 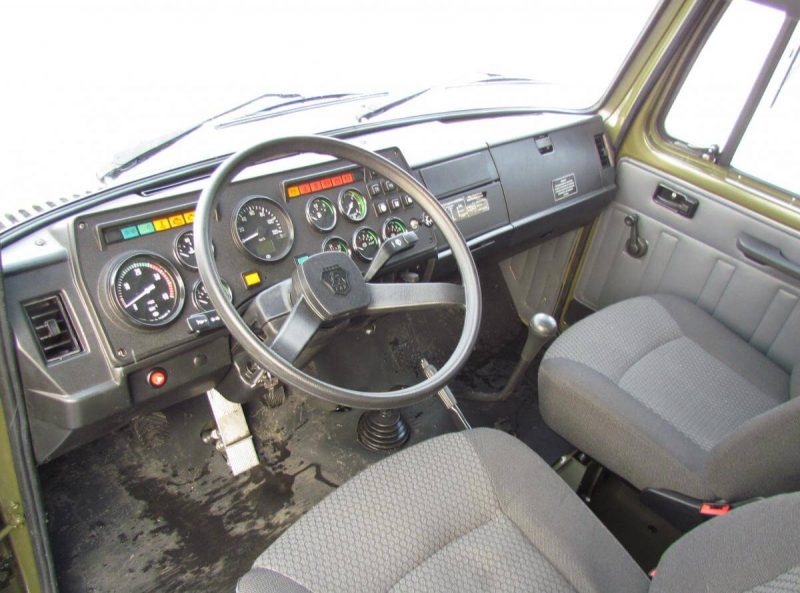 Inside GAZ-Sadko 4×4 everything looks utilitarian, very simple, but practical. Some inconveniences can be caused by getting into the car, because the cabin is quite high, and the factory does not provide comfortable handrails, which could be taken up. Perhaps even here Gorky specialists decided to save money. For the driver and passenger there are two seats with comfortable seats, where there is soft upholstery and seat belts.

It should be added that the model 33081 is equipped with a two-row cabin as an option, which has a pair or four doors. Modification with a pair of doors – the rear row of seats can be changed to a pair of berths, which will provide the opportunity to use the truck for long-distance freight transport, or for repair crews, where there are remote areas.

For a truck with four-cylinder four-cylinder Belarusian diesel engine MMZ D-245.7 with in-line arrangement of cylinders, which has a total working volume of 4.75 liters. The engine received liquid-cooled equipment, direct fuel injection and turbocharging system, where there is intermediate cooling of inflatable air. This engine fully meets all Euro-4 environmental standards. It is capable of producing 122.4 horsepower. 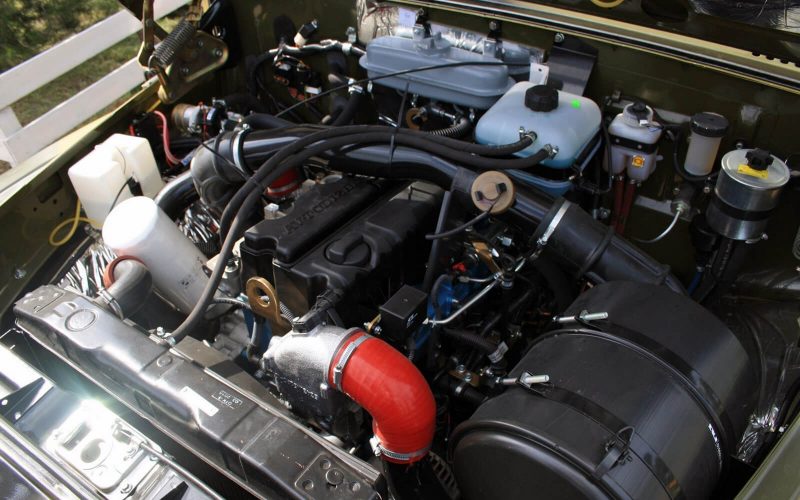 Starting from the winter of 2013 (February), manufacturers began to offer a power pack together with the Yaroslavl Motor Plant. It is represented by YaMZ-53442, which also meets Euro-4 environmental standards.

It also has in-line four-cylinder arrangement with direct fuel injection and turbocharging system, where there is intermediate cooling of inflatable air. Its volume is a little less – 4.43 liters, but it already produces 134.5 horses.

You can also see a single-disc dry clutch. In order to overcome difficult areas, we have provided a 2-speed transfer gearbox, which is able to reduce the speed from the power plant to the gearbox without loss of power.

Also in the car you can see the presence of interwheel differential with increased friction, which was borrowed from the 66th model. Just thanks to the synchronization with the gearbox, a high cross-country ability is ensured.

For example, Sadko can overcome the ascent, which slope will be up to 31 degrees on the horizon. It would not be superfluous to mention here the 315 mm ground clearance for the basic model and 335 mm for the army equipment.

The vehicle was built on the platform of the frame biaxial base, where there is a dependent spring suspension at the front and back, as well as longitudinal semi-elliptic springs, which are complemented by hydraulic telescopic shock absorbers of double-sided operation on all wheels.

The running gear of the 66th model was taken as the basis, but it was significantly improved. Thus, its payload has risen by 500 kg, which has reached a total of 2,500 kg. Although, in our area it is customary to overload this truck (and not only) ruthlessly.

It is represented here by a two-loop type and is equipped with ABS system. Also there is a hydraulic drive, hydrovacuum amplifier and vacuum receiver on each circuit. All wheels of the car received drum brakes. The parking brake, which is a transmission brake and has a mechanical drive, was not dispensed with either.

The base cost of GAZ Sadko is considered to be the starting point of $20362. However, this price list is higher than the price of “Zemlyak”, where there is even an increased payload. The difference is as much as $765. If we talk about other modifications with equipment, we need to calculate it together with the manager during the formation of the order. 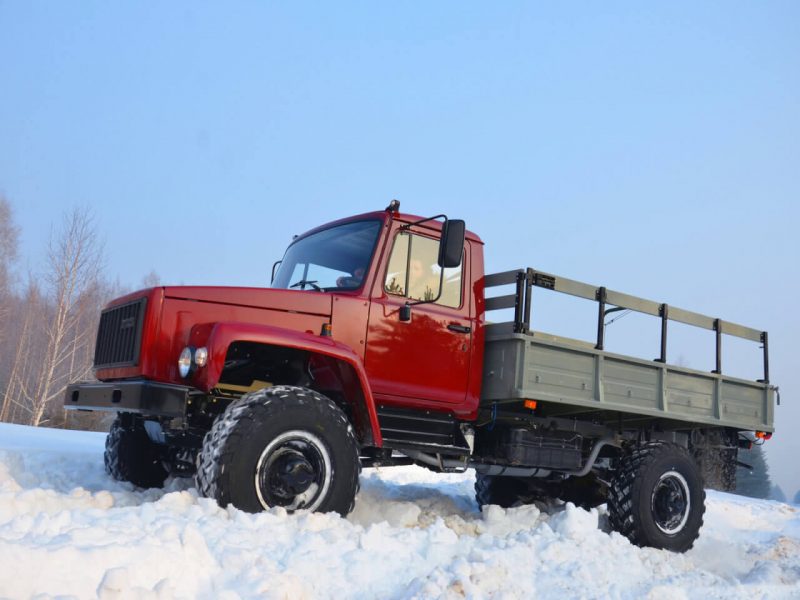 The official representative offices of the Gorky Automobile Plant can offer about 100 modifications from the Sadko family. With the addition of various companies that are engaged in completing the construction of special vehicles and vans on the Sadko platform, the number of modifications can go for a thousand.

It is not even necessary to see with your own eyes GAZ Sadko in order to understand that this model is popular and diverse. Most of the photos and videos on the Internet help to fully disclose information about it. This vehicle has already made history.

Despite the large number of upgrades already offered, the company leaves a lot of room for improvements and modifications to other companies. The truck is simply designed for off-road, which is enough on the territory of the Russian Federation. 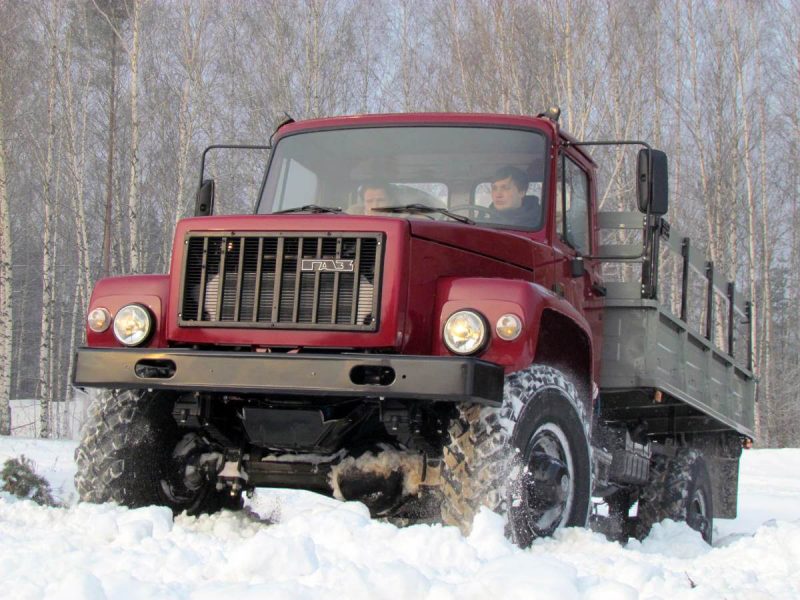 The vehicle has received comfortable wheels, which together with the all-wheel drive system, quite powerful power units and large ground clearance allow you to overcome all the hard-to-reach areas. Therefore, the model is often used in various areas of work.

Inside Sadko there is no European level of interior, but we are sure that the Gorky Automobile Plant is working on it, which will make it possible not only to be one of the most passable trucks, but also to be comfortable. The latter, in turn, will provide an opportunity to be on the leading positions in the automotive market. 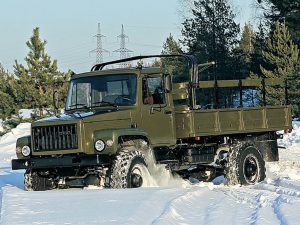 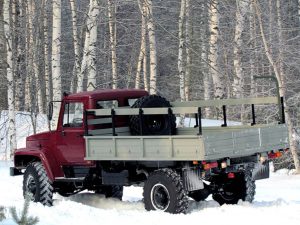 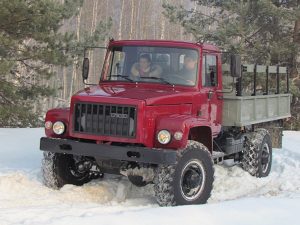 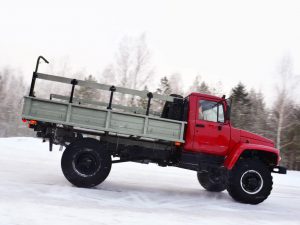 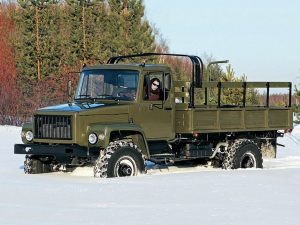 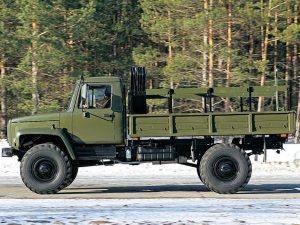 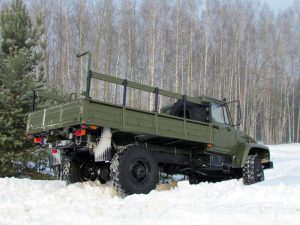 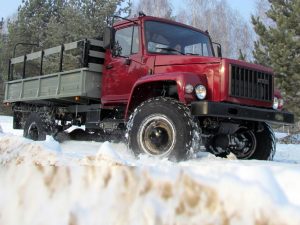 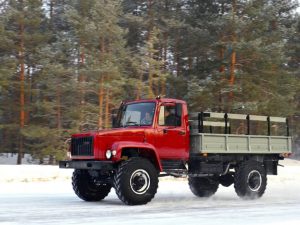