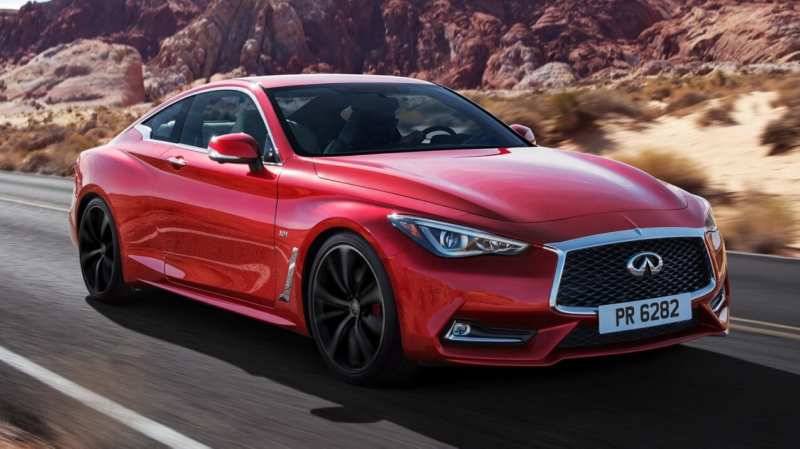 At the 2016 Detroit Motor Show, a 2nd generation two-door Infinity Q 60 was presented. Its pre-production variation was also demonstrated in Detroit, but only last year. It is necessary to remind that the last model from the very beginning was called Infiniti G Coupe. If you pay attention to the new Japanese coupe and compare it with the previous generation, the novelty has changed beyond recognition, it has added dimensions, got much more daring proportions and tried on a completely new technical stuffing. The whole model range is Infiniti.

Thanks to the available photos, it is possible to find significant differences in the external design, if you compare it with a car made in Korea with G37 Coupe. Infiniti Q60 of the 2nd generation has a more daring and expressive appearance, which seems to hint at the characteristic power and sportiness of the car. Also, the way the key bodywork elements were designed does not allow to conclude that the car belongs to the Infiniti model chain. The nose part of the sports coupe almost fully replicates the design of the front part of the Q50 sedan, which was previously presented to the public.

Infiniti Q60 of the 2nd generation has in its arrangement a head optics with a similar shape and similar configuration of the radiator grille, but which has slightly increased in size and received an abundance of chrome perimeter. There are ribbons of LED lights that adorn the headlights, which makes the new Q 60 more attractive, especially its look. 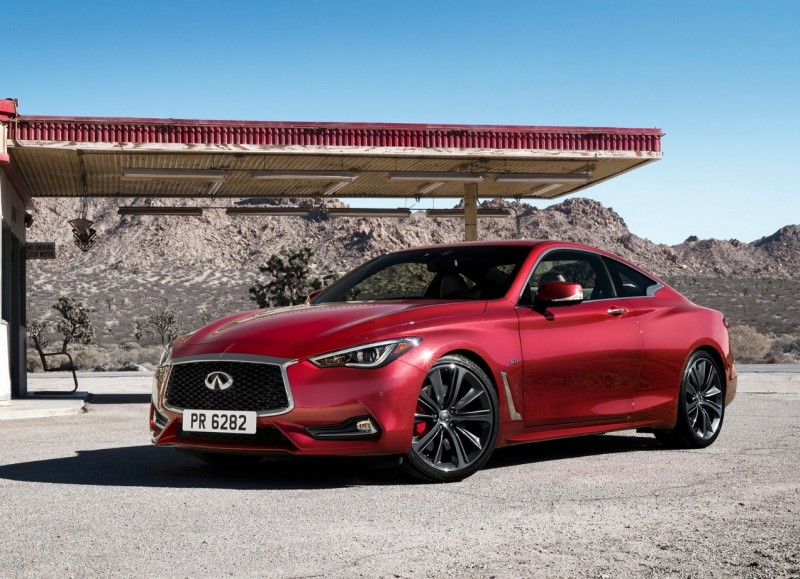 The front bumper has a characteristic “skirt” and a large falling hood with the presence of branded rising ribs, which give the car more sportiness and aggression. However, at the same time the car has excellent streamline. Active blinds, which are hidden behind the false radiator, help to improve aerodynamic characteristics, as well as front wing vents, which are involved in the optimization of air flow.

The 2nd generation side of the Infiniti Q60 shows the presence of athletic bodywork sidewalls. The profile was slightly shifted to the back of the roof dome. The presence of massive wheel arches with the utmost accuracy contain the inscribed 19 or 20 inch wheels. The chrome-plated side window frame received an original bend in the area of the rear posts. 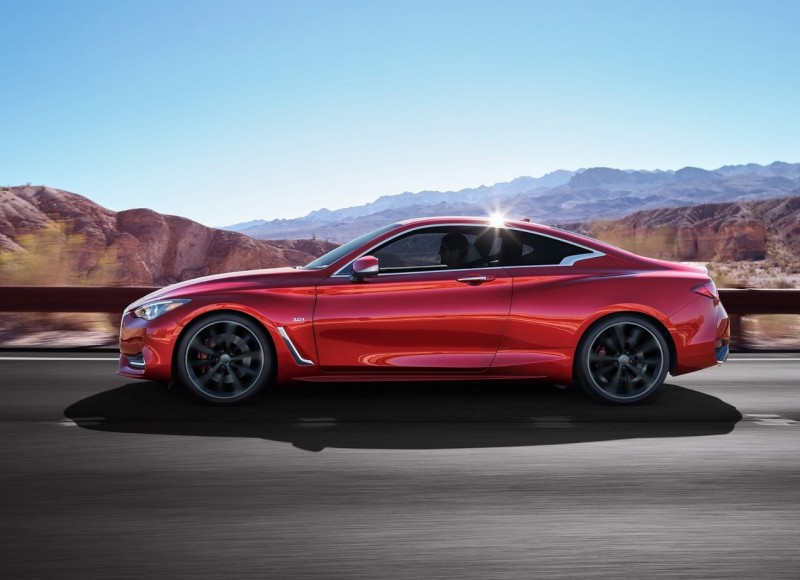 The serial version has more standard rear view mirrors and door handles. Looking at the side, it seems as if the sports coupe simulates the movement of fluid, which is partly achieved through such graceful lines. There is also a light, almost airy roof with a weightless rear post. The rear part of the Japanese sports coupe has a horizontal lighting equipment with attractive graphics and a massive rear bumper, the diffuser which has been integrated into a pair of nozzles of exhaust pipes. Still behind you can see the majestic impression of the spoiler. It wouldn’t be superfluous to mention that again, the Japanese designers worked for fame.

When you open the door and you sit in the 2nd generation Infiniti Q60 salon, you immediately realize that everything here corresponds to the premium level of high-quality finishing materials. The basic version even has aluminum details, and the more top-of-the-range equipment has elements made of carbon fiber. In total, for the interior of the Japanese there are several color solutions of the designs, any of which provides for the use of contrast stitching, which can only enhance the sense of premium salon.

Installed in front of the seat, I have good lumbar and lateral support, which simply eliminates fatigue during long driving and curvature of the spine, which is important. The arsenal of the sports car still has an advanced infotainment system, active noise reduction system and Bose audio complex, where there are 13 speakers, which are adjusted specifically for such a car. 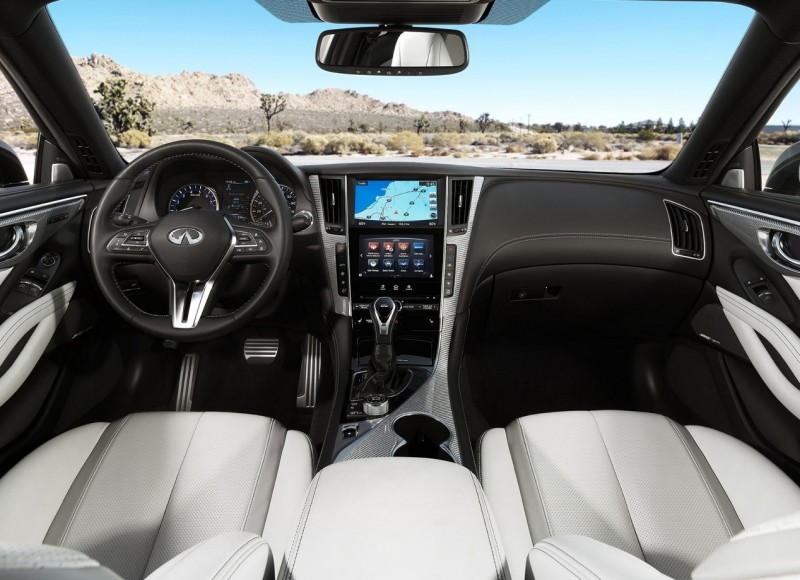 In the manufacture of seats and other parts, the presence of high-quality genuine leather, decorative inserts made of aluminum or even wood and carbon fiber was used. The person who sits behind the steering wheel simply cannot help noticing the exemplary ergonomics of how the controls are positioned, as well as excellent visibility and almost perfect fit. But it couldn’t have been otherwise, because the developers had a task to bypass their main rival, the German coupe BMW 4-Series, in this respect.

Though everything inside the car is fine and elegant, he still lacks sports qualities. Initially, sitting at the wheel, you look at a couple of screens, which were placed on the central part of the torpedo, which could contain the maximum number of options. Installed at the top, the 8-inch screen displays a picture of the navigation system, and also shows the image from panoramic cameras. 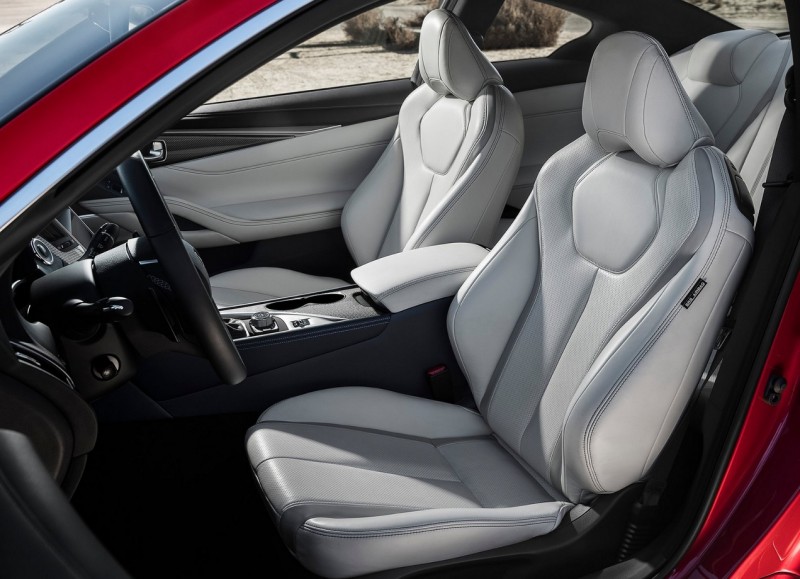 A bit lower, we have placed the 7-inch screen that enters the Infiniti InTouch service menu (i.e. music settings, climate control, and complex adjustments). The dashboard has not been overloaded with unnecessary information, it looks rather modern and laconic, which can be attributed to the multifunctional steering wheel, which in its entire form and appearance meets the premium status of the car. In general, the cabin was provided for by the ratio of “2+2”, which literally indicates that the rear row will be comfortable for children, probably, than adult passengers.

A 2.0-litre gasoline turbocharged four-cylinder engine, which produces 211 horsepower, was provided as the basic engine for the Infinity Q 60. It has a 16-valve gas distribution mechanism. In the combined cycle of ride, it consumes about 9.8 liters per 100 km. The alternative to this is the new 3.0 liter V6 Twin-turbo VR engine, which is available in 304 horse and 405 horse power variants. This engine has a direct fuel supply.

With this stronger engine, the vehicle consumes about 10.2-10.7 litres per 100 km in mixed mode. The dynamic component is not yet known, but it is clear that all power units will be synchronized with the 7-range automatic machine. The V-six modifications will go with the all-wheel drive system, which normally distributes the torque between the two axles in a 50/50 ratio. However, if necessary, it can transmit up to 100% of the traction to the rear wheels. 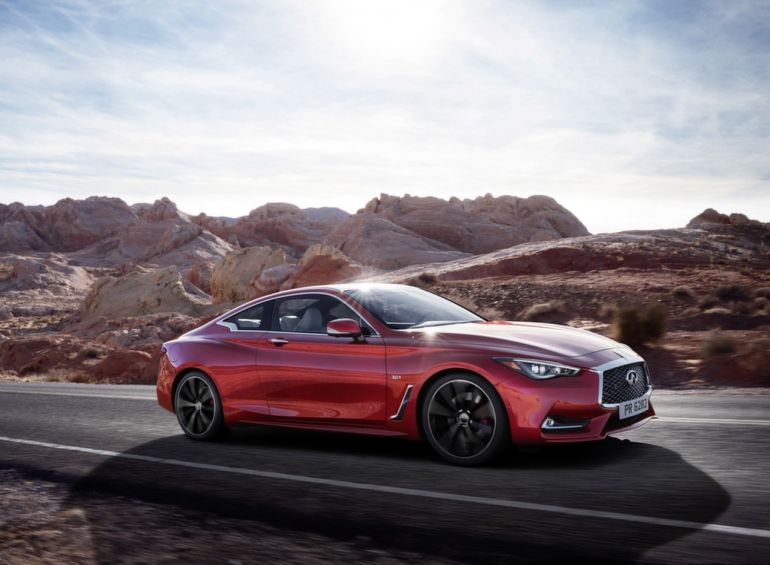 The 2nd generation Infiniti Q60 is based on the Nissan FM rear-drive chassis, which has a two-lever suspension at the front and a multilever suspension at the rear. As a separate option, the vehicle is equipped with electronically controlled shock absorbers. As standard, the vehicle is equipped with an electro-mechanical power steering, and as a separate option can be set up with an adaptive mechanism that does not have an “iron” binder with the “”steering wheel and is fully controlled by electronics. As a braking system on the Japanese sports coupe Infiniti Q60 2nd generation provides a disk ventilated brakes on all wheels, which are complemented by 4-channel ABS, EBD and Brake Assist.

The size of the Japanese sports car Infinity Q 60 of the 2nd family is: length 4 683 mm, width 1 850 mm and height 1 385 mm. The wheelbase of the coupe is 2,850 mm. But according to the criteria of aerodynamics, the Japanese still have a place to grow, because the value of 0.28 on the coefficient of drag, does not serve as an example for cars of a similar class. 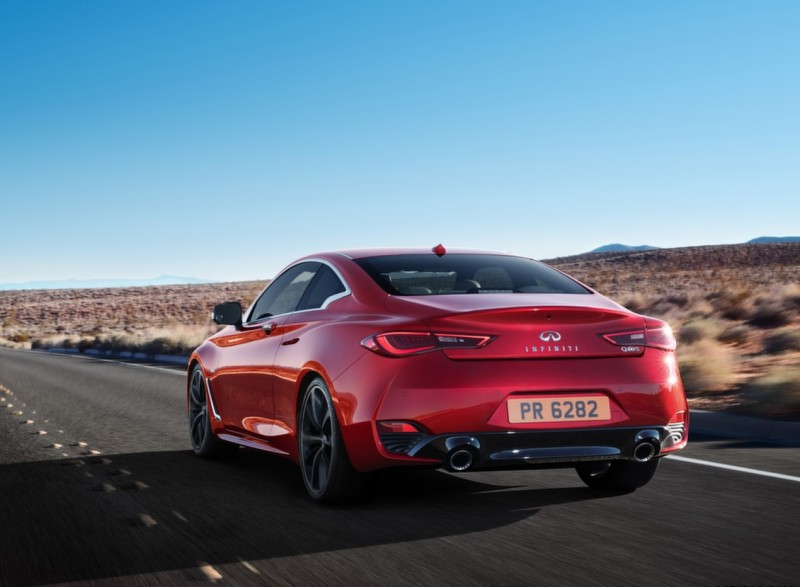 Top variation of the machine will be estimated at about $62975960,00. In this version, there will be an adaptive steering wheel, ventilated disc brakes on all wheels, leather interior, all-around visibility cameras, satellite navigation system.

The novelty of the Japanese sports coupe Infiniti Q60 of the 2nd generation turned out to be quite successful. The car has a rapid front end, which flows smoothly into stylishness, and even sporty in some places. Massive arches of wheels, with no less big wheels, which emphasize the sports qualities of the coupe. The rear part has exhaust pipes, beautiful rear lights and also a sporty appearance. All pleasant sensations do not end on the exterior of the car. The interior decoration is amazing. The quality of details, elements, leather, application of exquisite materials and the quality of assembly at height.

The steering wheel, dashboard, central console, on which a pair of color displays are eloquently painted, all this speaks about remarkable and thought over ergonomics. Everything is intuitively simple and clear. The front seats are simply above all praise, they are very comfortable, comfortable with good lumbar and side support. Not so comfortable on the back row, which has the form of “2+2”. There will be good feeling there, most likely, children. 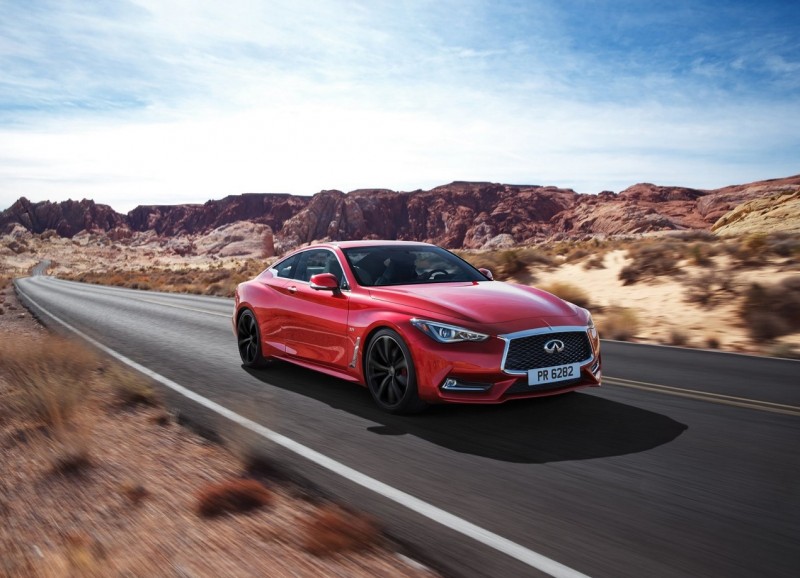 The luggage compartment is not a record-breaking one, but this car was not created for luggage transportation, for example, there is, say, Fiat Doblo. I am pleased with the rich technological filling of the car, various systems designed to help the driver when driving on the road. There is also a lot of equipment, even basic equipment.

Power units will allow you to fully feel yourself in a sports car and be confident when overtaking and driving uphill. It is also nice that you can order the installation of a four-wheel drive system. The Japanese are very sensitive to the safety of not only the driver, but also the passengers sitting next to each other, and Infiniti Q60 of the 2nd generation was no exception. 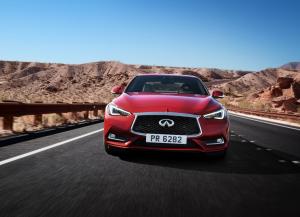 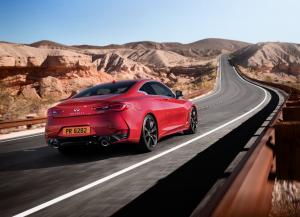 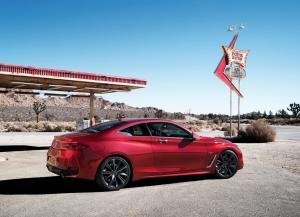 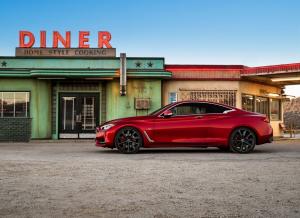 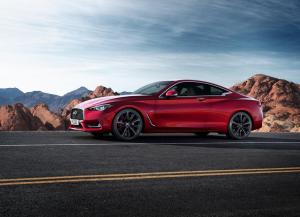 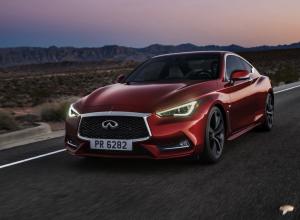 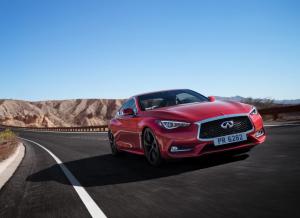 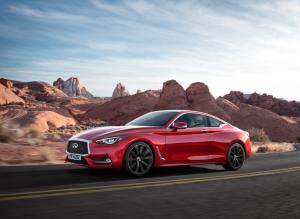 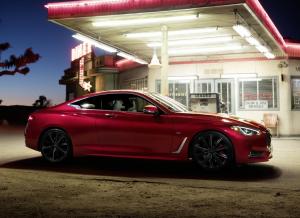