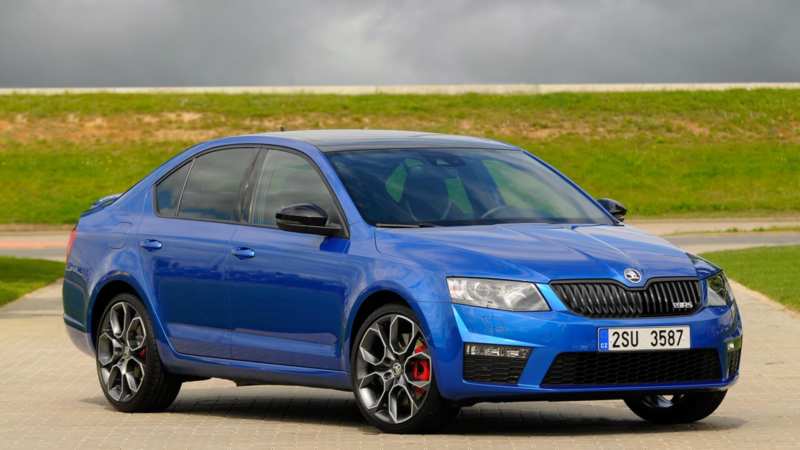 Skoda Octavia RS is a sporty version of the standard model of Octavia from the Czech company Skoda. The first generation of the car was seen by the world in 2000. The body was made either as a hatchback or as a station wagon. Even a special racing version called Skoda Octavia RS WRC was produced. And since the engines on the model were only gasoline, it was decided to produce a diesel version – GT Limited.

The next generation was presented by the company in 2005 in England. A more powerful gasoline engine was installed, and in 2006 the diesel engine replenished the range. In 2009, the car went through restyling. The last generation was able to see the world in the model year 2013. Goodwood Festival of Speed is a special auto festival dedicated to speed. It was held in England in 2013. The whole model range is Skoda.

When you pay attention to the appearance of the car, the presence of defaulted xenon headlights is immediately taken into account in the basic version. The grille looks very unique, which was fully painted black with a nameplate RS at the bottom right. The restyled bumper, which was enlarged due to aerodynamic skirts, found its place even lower.

In the front bumper there is a huge air intake, which was covered with a shallow mesh, and on the sides of the bumper fits perfectly with fog lamps with longitudinal headlights. Along with the grille of the false radiator in black color and painted side mirrors, which are present stylish repeaters in the form of LED ribbon. 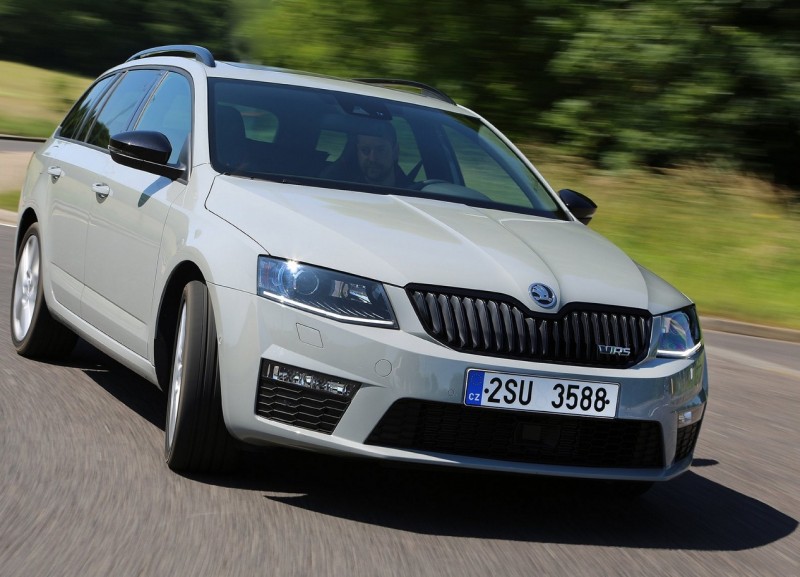 If you consider the version of the car and the model of the hatchback, you immediately notice the beautiful wheels that can be picked up to suit your taste, diameter from 17 to 19 inches. There are several variants of colouring: it is presence of silver and anthracite colour, and also the combined colour. The brake calipers are painted red. The new MS Skoda Octavia also features a rear bumper restyled with a striking diffuser insert and integrated exhaust pipes on the sides, which are also chrome-plated.

Even on the sports version RS, an anti-wing is installed on the roof of the luggage compartment, which provides a good downforce for the rear of the machine at speeds above 240 km/h. This anti-wing on the hatchback version looks great and very noticeable, but on the universal version it is almost invisible, it can be recognized only by stop signals, but it seriously increases the bodywork performance in aerodynamics. All these changes have affected the size of the vehicle, which has been increased. 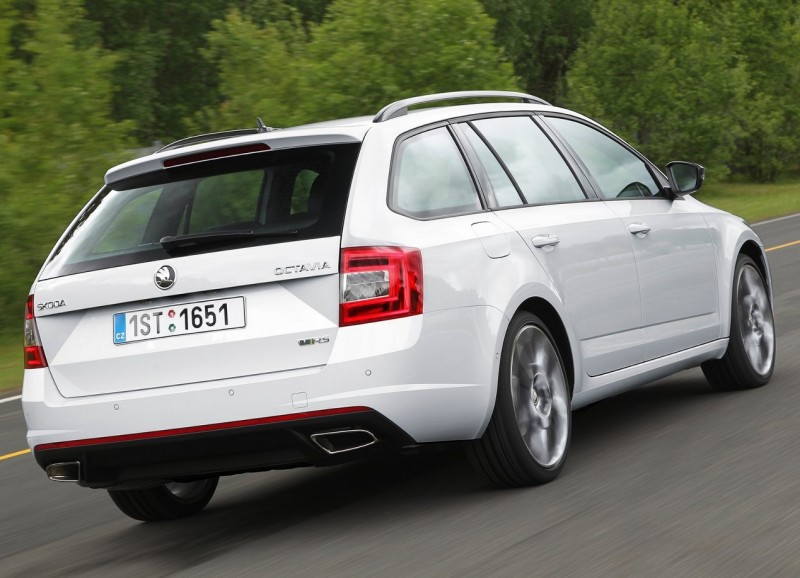 If we consider the interior of the charged modification, the standard equipment of Skoda Octavia appears in the head at once, but for the RS version there is a full-fledged black interior with inserts from carbon on the panel located in the center and on the cards of doors. The new steering wheel has been covered with perforated leather and has three spokes, which perfectly harmonize with the large circles of the sensor of a speed mode and the sensor of turns of the power unit which are harmoniously intertwined with the colour display of the board computer.

The novelty includes seats with good anatomical support and integrated head restraints in the backrest, and lateral support perfectly retains the driver in steep corners. The pedals have been coated with aluminum nozzles. The seats are covered with combination fabric and leather or simply leather. A stitch in red or grey also looks great. Almost everywhere you can find nameplates, which constantly remind you that you are in the cabin of a sports car. 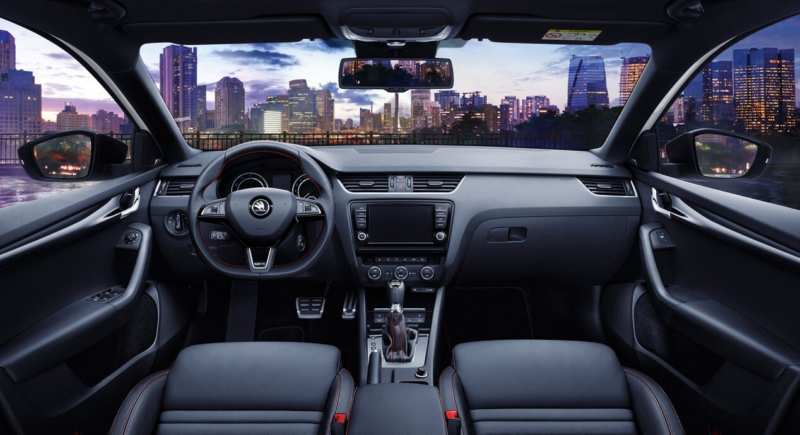 It is possible to tell about the salon of PC-ki for a very long time, because it is simply magnificent, there is enough free space for everyone, both on the 1st row and on the 2nd row. To add to all the above is a capacitive luggage compartment, because the liftback of Octavia RS Skoda has 590 liters of useful space, and if necessary, you can increase it by adding backrests of rear seats up to 1580 liters. The universal version already has 610 to 1740 litres of free space.

There are also auxiliary equipment with various functions and services, which are designed to increase the comfort and safety of Skoda Octavia RS. The interior of the Czech car has 9 airbags, updated cruise control, parking assistant, Start/Stop option and keyless opening of doors, a system controlling the condition of the driver and the position of the car on the roadside, monitors the road marking line and signs. 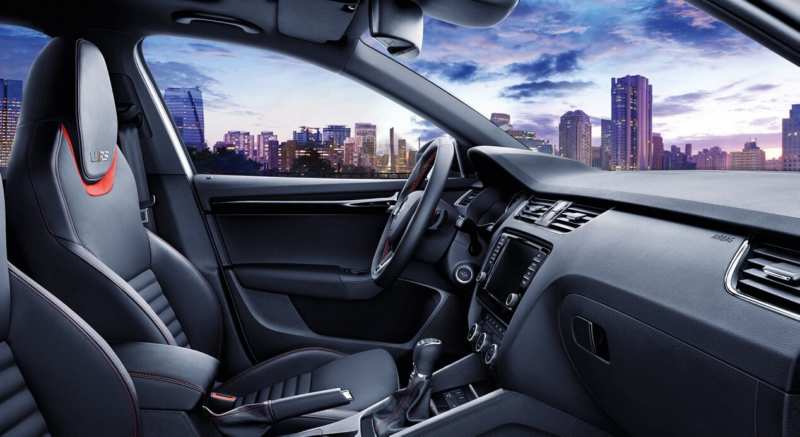 In addition, there is a multimedia installation with a color screen, which supports touch input and is designed for 8 inches, a panoramic hatch and a bunch of other pleasant lotions. It’s nice that steel overlays appeared on the doorsteps as well, and the interior lighting has changed a little. Instead of simple seats, it was decided to install seats with a sports slope, and the dashboard was equipped with a screen Maxi DOT.

Under the hood is a gasoline engine TSI with a volume of 2.0 and 220 horsepower. The acceleration up to 100 km/hour is 6.8 seconds, and the maximum speed is 248 km/hour. Less powerful engine is also offered, but both variants are equipped with mechanical and automatic gearbox DSG. Taking into account all this consumption, it was possible to reduce as much as 19%.

In addition to the gasoline version of the engine, there is a model available that operates on diesel fuel – a 2.0-liter TDI, designed for 184 horsepower. This engine reaches the first hundred kilometers per hour in 8.1 seconds, and its maximum speed is limited to 232 km/h. Interestingly, since the autumn of 2015, the model includes all-wheel drive version.

This version comes with a diesel engine and reaches the first hundred in 7.6 seconds, and is synchronized with the robotic gearbox DSG, but the maximum speed is slightly less – 228 km/h. 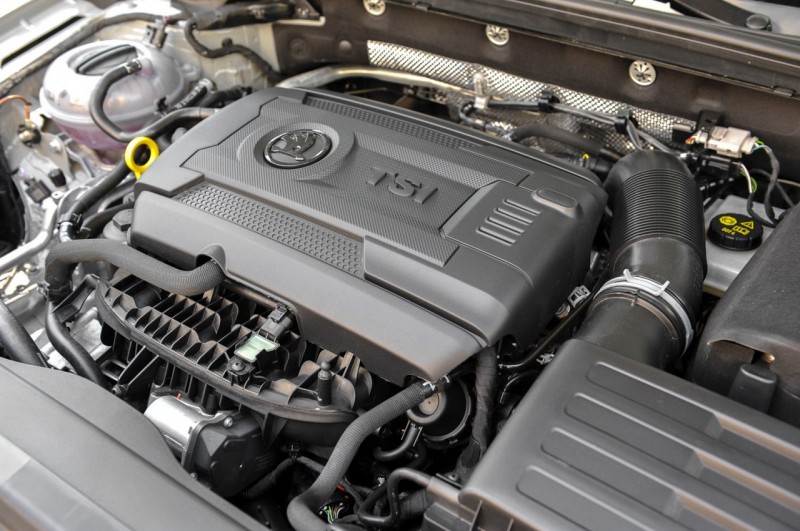 Power units are not bad in principle, but Czech developers have not managed to outperform their principal competitors in the automotive market, because they demonstrate much better dynamism. For example, Volkswagen Golf GTI reaches the first hundred in 6.4 seconds, and Ford Focus ST in 6.5 seconds. The leader is Mazda 3 MPS – it is necessary for it to overcome a mark of 100 km/h only 6.1 seconds.

Speaking of suspension, it is necessary to notice that it is used here by an independent design with racks of type McPherson in front and multilever independent on a back axis. It is worth mentioning that the suspension adjustments have been completely changed, so that the car became more sporty and completely adapted to driving. There is also an electric power steering system with variable characteristics, and disc brakes are used as the brake system.

The most attractive in the Octavia MS Skoda is its versatility. If you are a family man, but in the heart of you live the soul of a racer this car is simply created for you. It is on it you can feel the superiority of a sports car and the comfort of just a chic car.

In contrast to the pre-restyling version, the new updated machine has a length of 4685 mm, width of 2017 mm, height of 1449 mm, wheelbase of 2680 mm. The front track is 1535 mm and the rear track is 1506 mm. Clearance is 125 mm, and in the pre-restyling machine it was 12 mm larger for the hatchback version and 13 mm larger for the wagon version. Unlike the standard version, the sports version of the Octavia RS has become longer, decreased, the wheelbase and the gap between the front and rear wheels was reduced by six millimeters.

Such structural restyling was carried out taking into account the increase of course stability and controllability of the machine of this series on a speed mode from a mark of 200 km/h. In the third generation sports cars, in contrast to the “simple” equipment, there are xenon headlights with LED daytime running lights and stylish lines.

Any sports car requires good safety not only for the driver, but also for the passengers sitting next to it. The updated Octavia RS provides a large list of interesting modification devices, which are not present in other models and versions.

The engineering staff of Skoda Automotive Company has been made safe by such new features:

Passive and active safety system ensures proper health protection for the driver and passengers. The list of Skoda safety systems should also include the materials from which the vehicle components were made. Crash tests can be used to determine that Octavia’s cabin cage is not damaged by a frontal impact.

Some services designed to ensure the safety of the driver and passengers use multifunctional cameras located underneath the rear-view mirrors on the windscreen. Lane Assistant ensures the safety of the lane, and Light Assistant is responsible for changing the lighting. 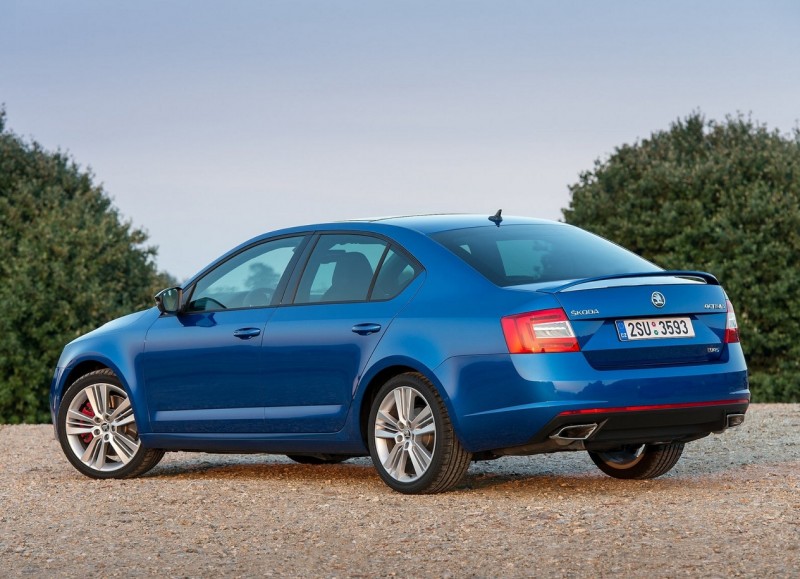 Road signs can recognize Traveler Assistant. While driving, he is pleased to have a driver’s assistant – an adapted cruise control, which he can keep at a safe distance from the cars going in front. Among the lists of active safety systems can be highlighted Pre-Crash, which is activated before an emergency and radar system Front Assistant, which recognizes emergency situations during the ride. Parking Assistant allows the vehicle to park on its own.

Today 220-strong liftback Skoda Octavia RS with manual gearbox is estimated at $31850,70. Completely similar model, but only in the body of the universal costs from $32886,24. It is strange, but the company decided not to supply cars with diesel engines to the automotive market of the Russian Federation. In any case, if you are a supporter of automatic boxes, you will have to pay additional $360,87 for it. 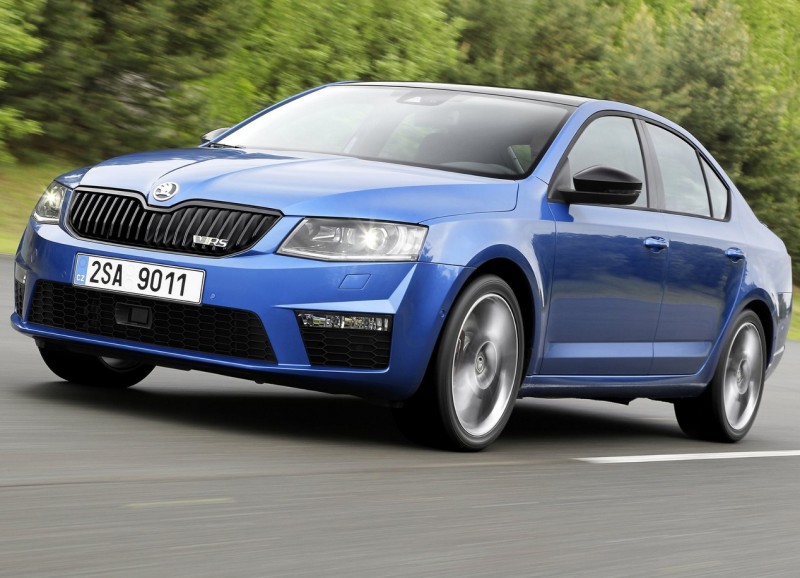 To sum it up, the Czechs did their best. It is possible to notice it on the improved appearance, the underestimated road clearance thanks to which the car became more steady on the road, and the aerodynamic parameters improved. The salon has become more qualitative, there was a screen with support of touch input. There is plenty of free space in the car, and the luggage compartment is huge.

The availability of a choice of wheel rims of different diameters, from 17 to 19 inches, made us happy. The suspension was practical and adaptive. The level of safety has been raised to a new, higher level, providing protection of life not only for the driver, but also for the passengers sitting next to him. 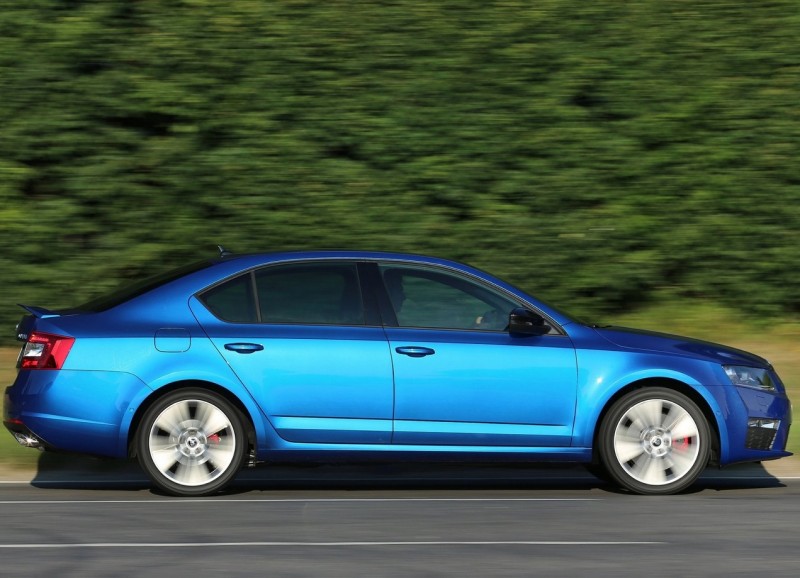 There are a number of electronic auxiliary systems available to help the driver on the move. Power units, although not the most powerful, but rather priemisty and allow you to feel confident on the road, during overtaking and when driving uphill. The latest all-wheel drive version allows the vehicle to move on light off-road, but do not forget about the low ground clearance, which will not make you feel like a full-fledged SUV. In general, Czech specialists were able to successfully improve the existing model of sedan and wagon.

We advise you to read the article: History of Škoda Company 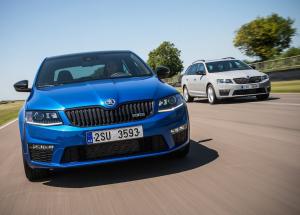 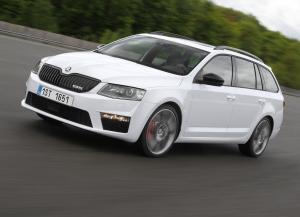 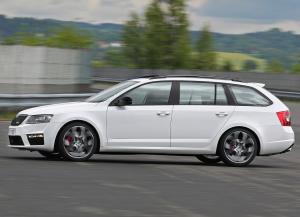 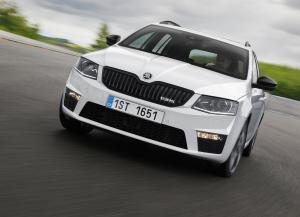 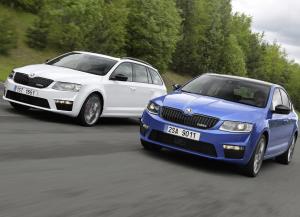 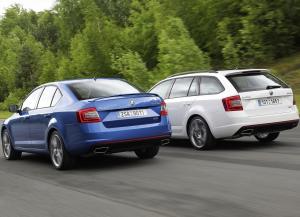 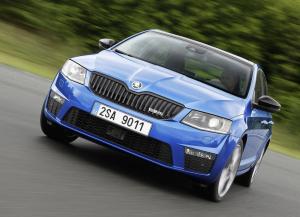 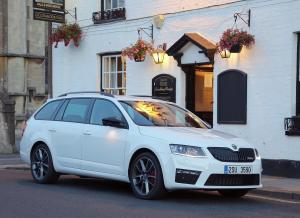 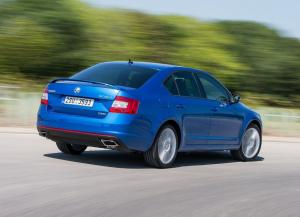