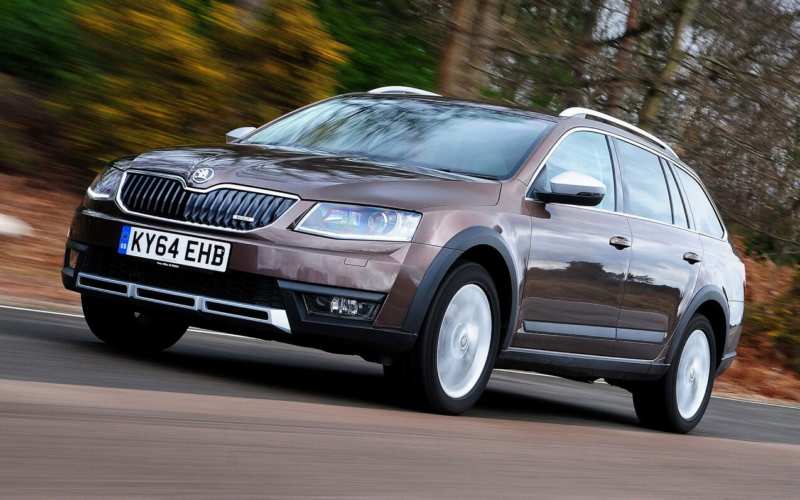 The trip of Octavia Scout to the Russian Federation was a long and difficult one. First, the novelty was shown in Geneva in spring 2014. In autumn, the station wagon arrived at the Moscow International Automobile Salon.

The start of sales in the Russian Federation has already been given, although the price of Skoda Octavia Scout was slightly higher than the declared one. However, it is not so high as to scare away the real buyer. Fortunately, all the advantages of Octavia Scout are worth their money. The whole model range is Skoda.

In terms of external design Skoda Octavia Scout turned out to be larger than its predecessor and, of course, more courageous. Despite the contours of the classic Skoda Octavia, which are guessed literally everywhere, off-road dodging, reinforced bumpers, exquisite design of discs and increased clearance allow to distinguish the city version from the real all-wheel drive universal. The body of the novelty consists of strong steel by almost 70%, which allowed to reduce the total weight of a kilogram by 30.

A big step forward was made in terms of aerodynamics. The length of the third Skoda Octavia Scout is equal to 468,5 sm, the width does not leave for 181,4 sm, the height rests in 153,1 sm. The ground clearance of the third Skoda of Octavia Scout is 171 mm. If as a whole the novelty has repeated all positive that was at its predecessor, but has brought some amusing novelties. 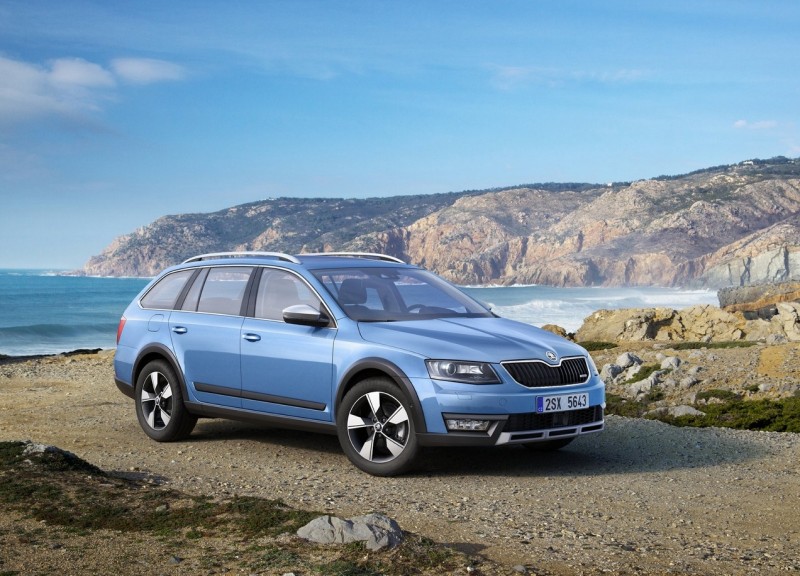 We would like to pay special attention to a wider range of colors – now the user can choose from 14 colors. Photos show that the size and location of the optical lighting system have been changed, and now the system is being installed in a bi-xenon system. The fog lights have become more powerful and have the option of illuminating the corners of the road. Hull shapes were changed. The car is also characterized by a bulky and even formidable appearance and a good protective coating.

Thanks to the impressive plastic bumpers, side overlays, door sills and enlarged wheel arches, there is confidence and safety. The sportiness of the Skoda Scout wagon is visible in the double exhaust pipes, which have been polished and chrome plated, and the rounded foggles, which have been integrated into the front bumper.

Again, you will not find any serious differences between Skoda Octavia Scout and Skoda Octavia III salons. Except that finishing materials became more expensive, and the interior was painted with Scout inscriptions. However, in the general interior they are entered rather harmoniously and remind about “off-road” character of “Scout”. Oh yes, and even pedals were equipped with stylish metal inlays with rubber inlays. Scout Skoda Scout salon was supplemented with a very spacious trunk with double floor.

What can I say, the car is a true champion in its size as for its class. It will be comfortable for everybody: both for the rear passengers and the driver. In the trunk you can transport almost any cargo. The interior of the new “universal SUV” for moderate off-road Skoda Octavia Scout has almost exactly copied the interior of the standard universal car Skoda Octavia A7 Combi. 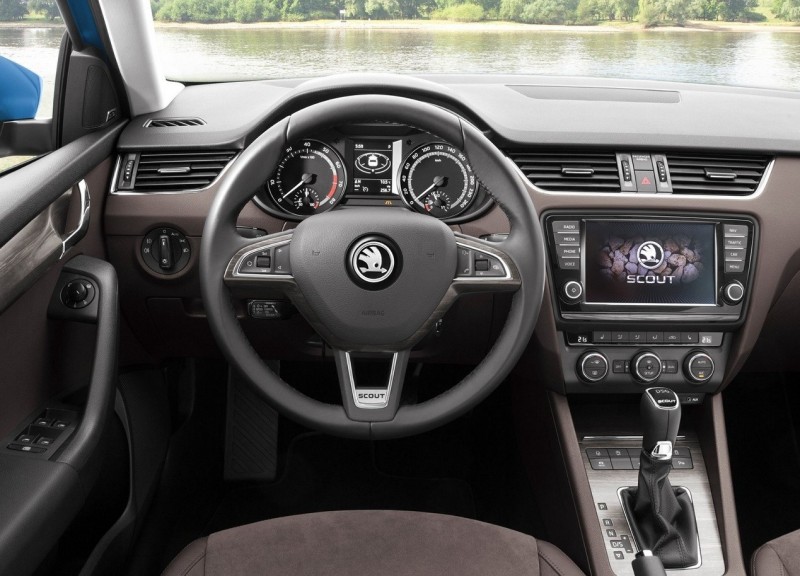 In length, the passenger part occupies 1 782 mm, for passengers of the 2nd row, 730 mm were allocated for legs. From the front seat cushions to the ceiling material – 983 mm, and the rear part of the interior provides even more space – 995 mm. The width of the interior on the shoulder height on the front row is 1 454 mm, the next row is 1 449 mm.

If you need to carry any bulky load, you can lower the backrest of the front passenger, buying a free space of no more than 2920 mm. The luggage compartment has plenty of space for small items, as well as fastening hooks and a double-sided floor cover. It is worth noting that in its class, this versatile car company Skoda is a leader in capacity. 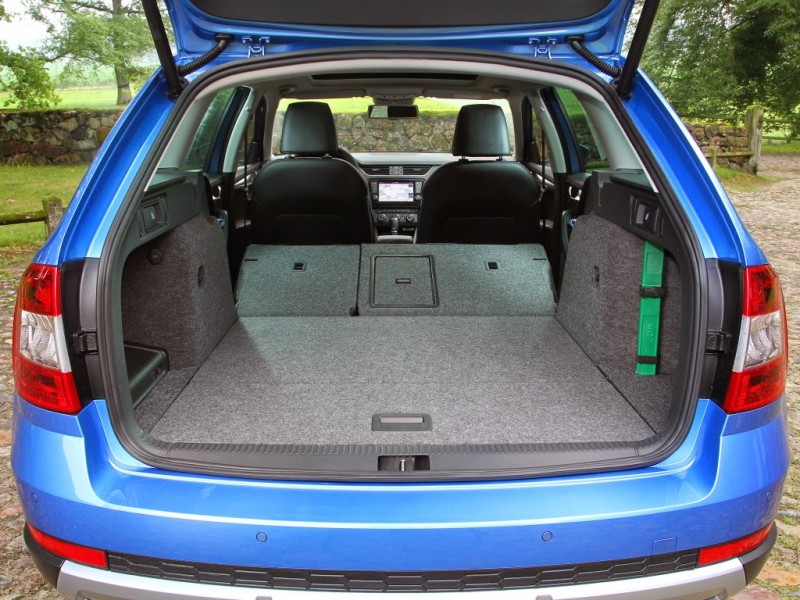 Basic and additional equipment of the new Skoda Octavia A7 Scout has at its disposal fabric or leather interior upholstery, nine airbags, Front Assistant with the option of automated deceleration, adaptive cruise control, traffic control system, the option of tracking signs on the road, as well as the physical condition of the driver, parktronic, rear view camera, parking assistant, two-zone climate control, full electric package, keyless access to the interior and start of the power unit with a special key, electric hatch, electric drive of the windows installed in front, front and rear seat heating, rain and light sensors, various audio and multimedia systems with a display designed for 5, 5, 5.8″ and 8″ touch-screen, 8″ and 8″ speakers, Xenon headlamps, headlamps and LED headlamps.

Unfortunately, the Russian owners will have to be satisfied with the only variant of the engine. For this role a four-cylinder engine of 1798 cm3 volume was chosen. The engine complies with the Euro-6 environmental standard, there is a turbocharger, the Start/Stop system. All this allows to develop 180 hp power. The torque, which rests on 280 Nm, allows you to accelerate the universal to 100 km / h in just 7.8 seconds. The upper speed threshold Skoda Octavia Scout is marked with 216 km/hour mark.

Czechs did not bother to provide motorists with a choice of gearboxes. The only engine for Russia is paired with a six-speed DSG “robot”. The disadvantage of such a gearbox is the usual desire to move to higher gear as soon as possible. This often leads to a delay in all shifts. In a word, if you like aggressive driving, it is better to switch to “Sport” mode at once. 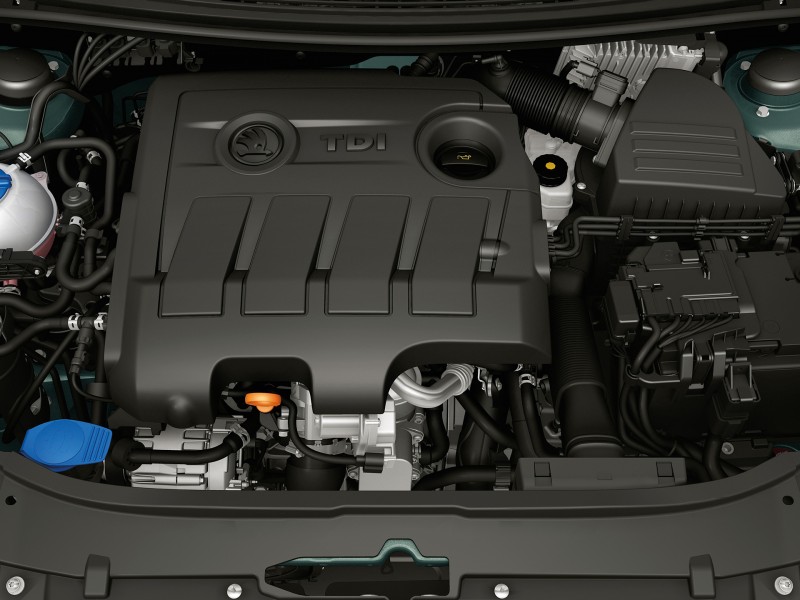 We’ve already talked about how Octavia Scout is a four-wheel drive station wagon. The basis for the all-wheel drive system is the fifth-generation Haldex coupling, supplemented by the EDL option. Up to 90% of the traction can be transferred to the rear axle. On light off-road terrain, this gives excellent off-road mobility. The vehicle was designed on the global base of MQB and serves without an alternative to all-wheel drive. In general, it is said that there will be three power units.

Two, operating on diesel fuel and one on gasoline. There is a system of regeneration during braking. The first engine is the TSI family and has a capacity of 1.8 litres and develops up to 180 horsepower. Only the six-speed gearbox DSG is synchronized. Interestingly, the average fuel consumption is 6.9 litres per 100 km. The second engine is a 150 hp turbocharged diesel engine.

This engine is synchronized only with the 6-speed manual gearbox. If such a motor is installed, the fuel consumption level with it is at the level of 5.1 liters of diesel fuel per 100 kilometers. The last engine is also a diesel engine, but it has 184 horsepower, and fuel consumption is the same as the previous diesel engine. It is important that with this engine, the vehicle can drive with a trailer designed for a weight of no more than 2 tons.

The new Skoda Octavia Scout car in the body is a wagon, capable of meeting the most stringent safety standards, recognized by the whole of Europe. In addition to a wide range of electronic assistants, which are designed to reduce the chance of losing control of the car, the Scout model comes with the latest passive safety devices. The impact can be reduced by 3-point seat belts and a set of airbags, which can be up to nine. 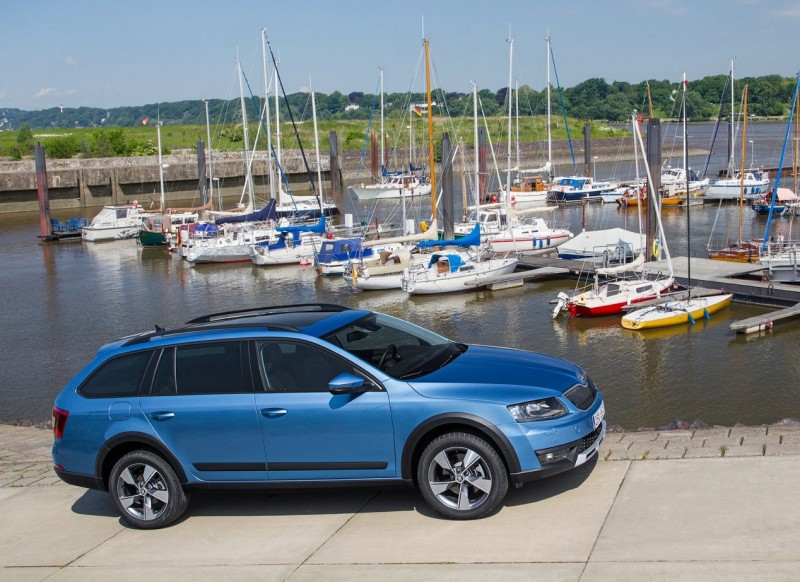 In general, the off-road wagon will be able to pass all the tests for frontal and lateral collisions. In the event of a collision, the chauffeur remained safe with the passengers. In the Czech Republic, children were also taken care of, providing them with the necessary level of safety by means of child seat bindings. Also, the car used the most modern equipment to help the driver on the move, such as a mountain climbing assistant.

The safety of the Octavia Scout Skoda can be attributed to it:

The basic equipment of the all-wheel drive Scout Skoda is seventeen-inch alloy wheels, front fog lights, six airbags, active cruise control, lock with remote control, immobilizer, a full package of electronic assistance to the driver and a lot of other chips. Additional options include a convenient panoramic hatch with bi-xenon optics and a couple of variants of disc design. The price of Skoda Octavia Scout in the Russian Federation starts from $27881,13. 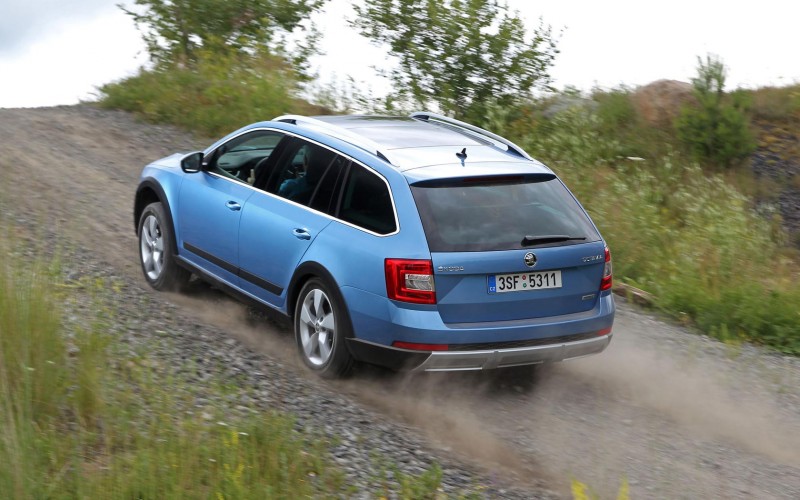 In the end, I would like to sum up that despite the almost identical appearance of the new Skoda Scout with its “relatives”, the car turned out to be a good one. New lighting equipment has been added, engine and gearbox protection has been improved, and the quality of the materials used has been greatly improved.

In general, ergonomics and cozy Skoda, to some extent reminiscent of Volkswagen, is also comfortable and pleasant to sit here, and more importantly, is the availability of free space not only for the driver and front passengers, but also for people who sit on the back couch. 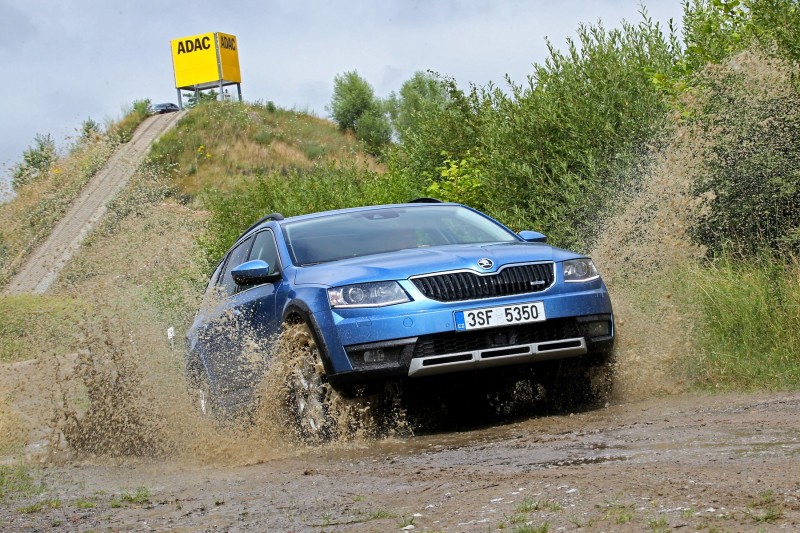 Speaking of luggage compartment, there is only positive emotions in the head – there is a lot of space in the trunk, and if necessary, you can fold the backrests of the seats and increase this space to 1740 liters, which can not but cause a pleasant surprise.

The ground clearance has also been increased, which has increased the cross-country ability of the car, and now it can overcome even the lightest off-road conditions, which is only facilitated by the all-wheel drive system. In general, the Czech competitors have only become more worried after the appearance of this “off-road wagon”. The car turned out to be quite successful!

We advise you to read the article: History of Škoda 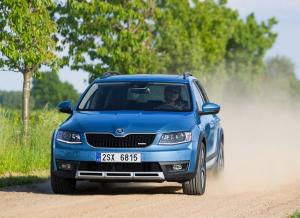 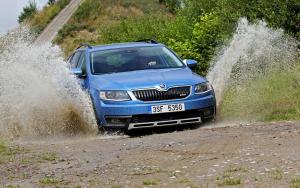 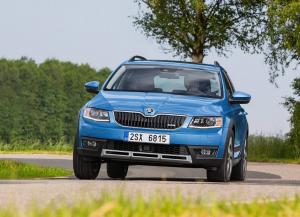 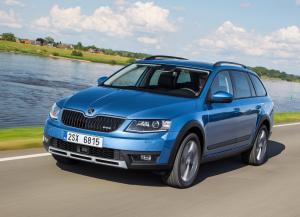 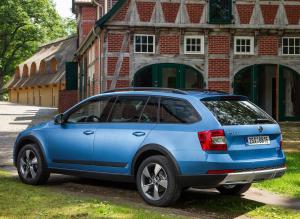 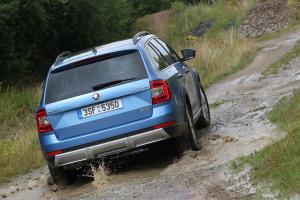 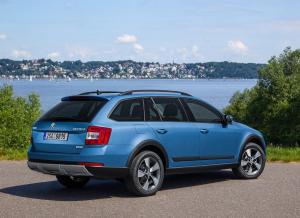 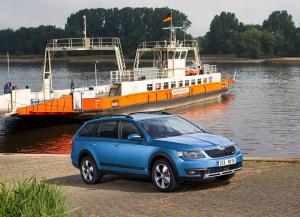 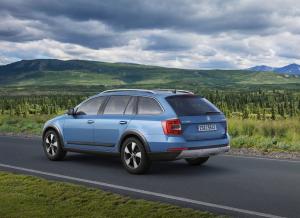