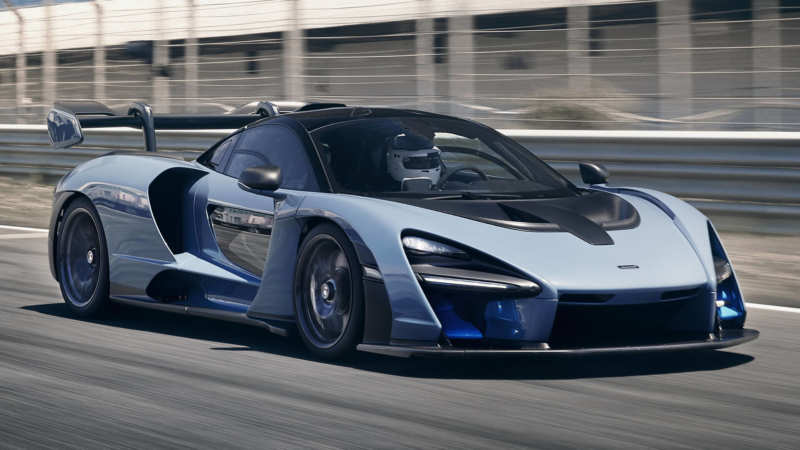 McLaren Senna is a sports car produced by the British company McLaren Automotive. The novelty received an internal index of P15. It was presented during the 2018 Geneva Motor Show. Even though the car looks like a car only for track races, it is approved for public roads and meets the standards. The new car has been under development for the past few years. The car has even received the annual designation McLaren Senna P15. The whole model range is McLaren.

There are modern adaptive optics with LED filling, where there are highlighted LED blocks. The central part is slightly recessed, but it did not affect the quality of the cornering light. Under the optics, there is a place for the headlights, which also have LED filling. 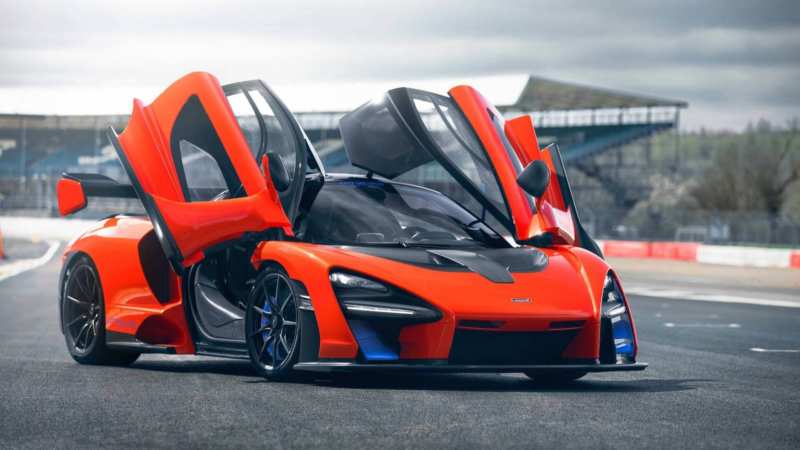 Many were surprised by the use of double-sided doors, which made it possible to reduce the car’s weight. It turns out that there is another one in the door itself in addition to the traditional window. The side has many air outlets for the radiators, which are responsible for cooling the power plant.

The car is supported by specially designed 19-inch front and 20-inch rear wheels. It was decided to apply unique Pirelli P Zero Trofeo R. The exterior mirrors are of medium size but stands out for their relatively large viewing capabilities. 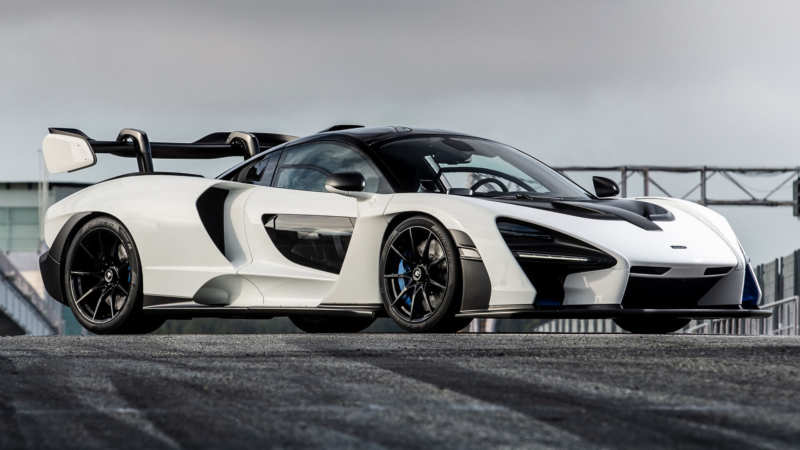 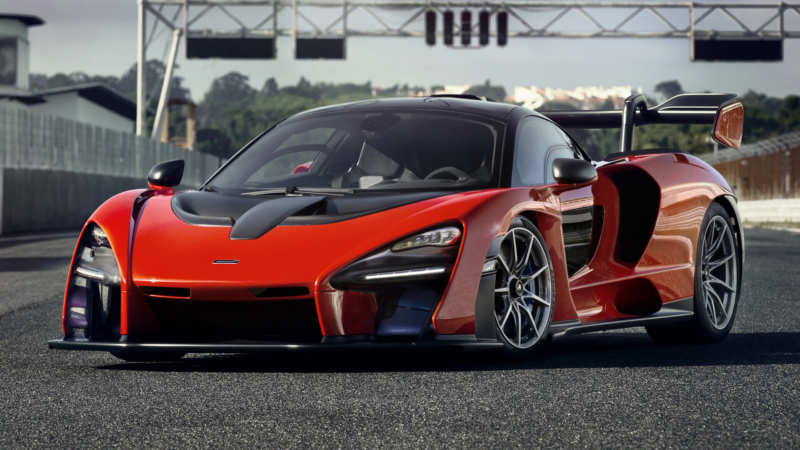 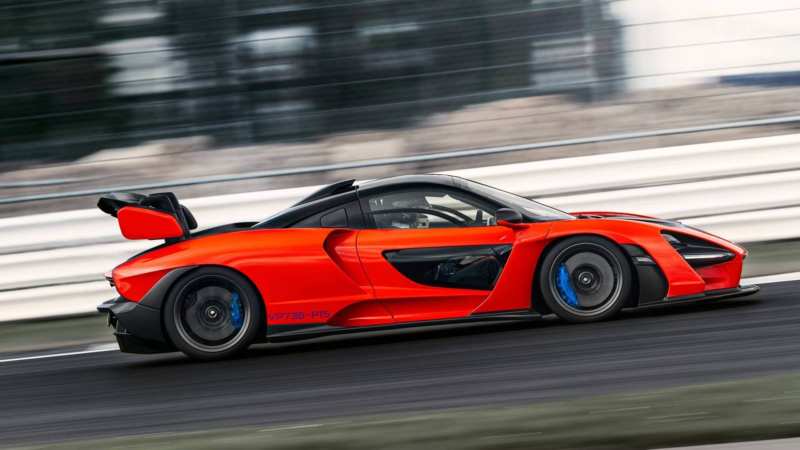 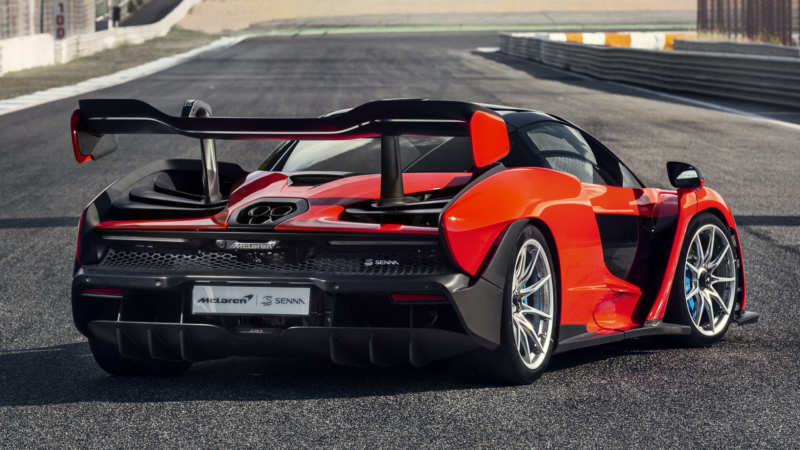 Supercar McLaren Senna was named after the legendary Brazilian racer Ayrton Senna, who played for the British team in Formula 1. He won the championship in 1988, 1990, and 1991 years. Back then, many people knew about McLaren Senna GTR cars.
The stern of the 2018 McLaren Senna P15 British supercar looks very impressive. And here, it’s not even about the redesigned cockpit or the lights for aerodynamics. All the attention is taken by the huge spoiler, a hydraulic mechanism that changes the angle for better downforce. During braking, it functions against streamlining, acting as an air brake. During the creation, the British used a monocoque McLaren 720S – Monocage, but 3 generations. The material is carbon fiber.

The McLaren Senna GTR was fitted with a more elaborate body kit, featuring a massive front splitter, an incredibly massive diffuser, a larger rear antifender, an abundance of flaps and deflectors on the body, and widened fenders (quick-release).

The British supercar’s interior is unlikely to impress with variety because the main emphasis in the company made on speed and comfortable driving. Despite this, individual parts of the car are significantly superior to other sports cars. Harsh and austere elements distinguish the interior. It was decided to use soft material for trimming the front panel. If the owner wishes, it is possible to use leather, Alcantara, carbon, or a combination of other materials.

An 8-inch multimedia system can be observed on the center section to add to the unique design, which supports touchscreen controls. The lower part of the screen is equipped with three small selectors and a USB port for charging and synchronization. As a platform, McLaren Senna 2019 decided to use Apple CarPlay, specializing in a particular car. Below the display, there is room for 12V charging and wireless charging. 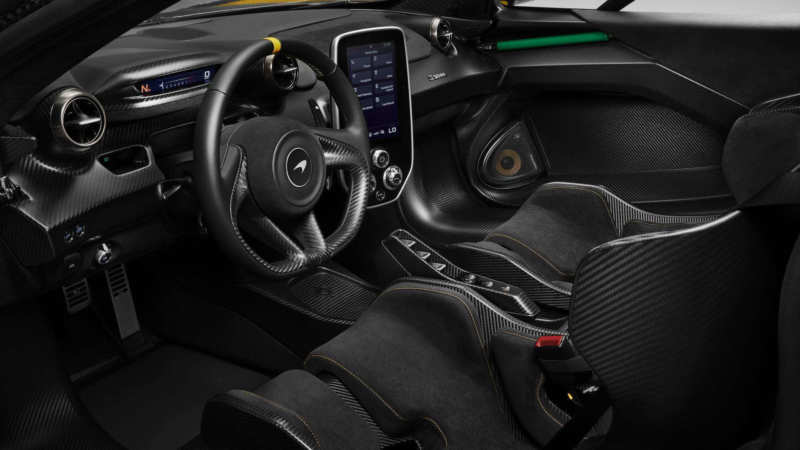 In general, the interior can accommodate two people. The seats stand out for their sporty type, with plenty of side support. Also, engineers decided to add side support in the shoulder area to minimize discomfort during sharp maneuvers. Recaro chairs are installed by default, but there is an opportunity to purchase or improve according to your taste and desire. As for the base and frame of the seats, they are made of fiberglass.

Between the seats, there are keys to controlling “automatic,” handbrake of electromechanical type, and also a compact compartment for storage of various trifles. It is not without other resolutions, including the button responsible for the Start/Stop of the engine, placed on the roof, which was a bit surprising, buttons to control the interior lighting, power windows, and several other functions.

Not many changes were made to the driver’s seat. The dashboard has a small color display that shows speed, gear shift modes, and several other car gauges. If the driver wants to or once the car passes a certain speed threshold, the dashboard will fold down, allowing more space to inspect the road surface.

The steering wheel itself has a sporty style, which makes it easier to steer at high speeds. The lower part is flattened, and the side is equipped with an excellent grip to hold the “steering wheel” during the turn. The gearshift paddles are also available. If necessary, you can adjust the “steering wheel” itself by height and depth.

There’s only room for two people inside, no more than that. There is some storage space in the back of the seats, but you can only put a couple of racing helmets and related equipment there.

The most exciting part is the engine. In this case, the British McLaren Senna boasts the M840TR Codenamed V8 cylinder 4-liter engine, two turbochargers. All this allows it to generate 800 horsepower (800 Nm). The British engineers decided not to go with the fashion and left only the gasoline power plant, not using the electric version.

Not too long ago, the company also improved the McLaren Senna GTR, designed for the track. The former engine now develops 825 horsepower, and the torque remains the same.

All the traction from such a powerful “engine” to the rear wheels is transmitted by a seven-speed robotized gearbox Graziano, a pair of clutches. Such characteristics of McLaren Senna allow the car already in
2.8 seconds to accelerate to the first “hundred.” The second “hundred” is dispersed already for 6.8 seconds, and to reach 300 kilometers per hour will take only 17.5 seconds. The speed limit is 335 kilometers per hour.

There are three operating modes for all units: Comfort, Sport, and Track. There is also a Race mode, which gives maximum data, makes the suspension stiffer, and lowers the body by 5 centimeters, which improves downforce by
40 percent. The braking system is powerful and stops the hypercar perfectly. Here the engineers gave preference to a carbon-ceramic system.

The limited-edition was produced in an amount of 500 copies. It is no longer possible to buy the McLaren Senna, as all the cars were sold out. The last hypercar was sold at auction for $2,670,000. These funds were donated to charity in Brazil. 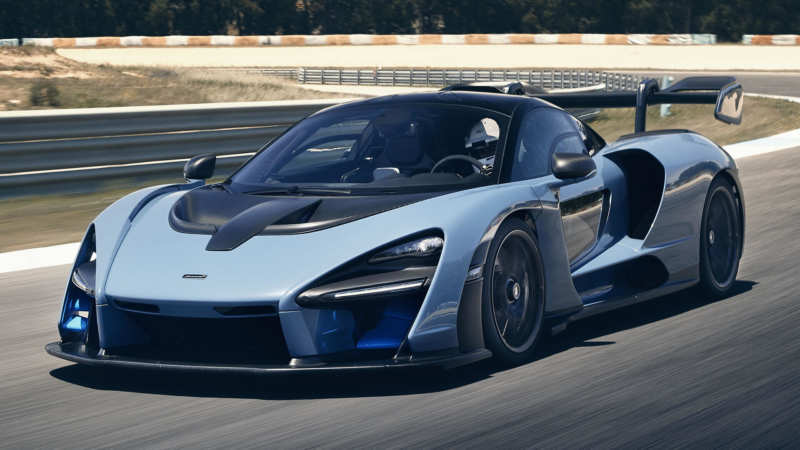 This niche is not the most common and very unusual. Nevertheless, the Briton has rivals. In the role of the competitor of the McLaren Senna can be Aston Martin Valkyrie and Pagani Zonda HP Barchetta.

What can we say at the end? The McLaren Senna is an exciting and costly car, which collectors or wealthy racers can afford. If we take the technical plan, the vehicle is also a cool development, as it set the Grand Tour track record, thanks to which it beat the performance of Aston Martin Vulcan. A nice bonus is a fact that the supercar can be used on public roads. Also, the uniqueness of the car and a small circulation bring its zest. 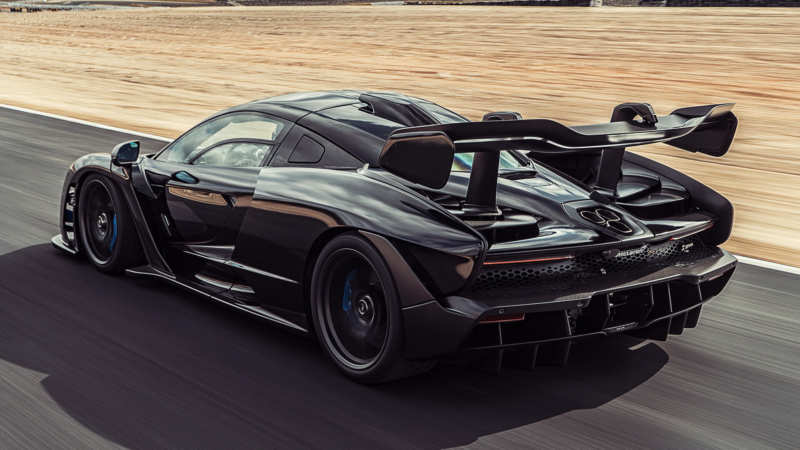 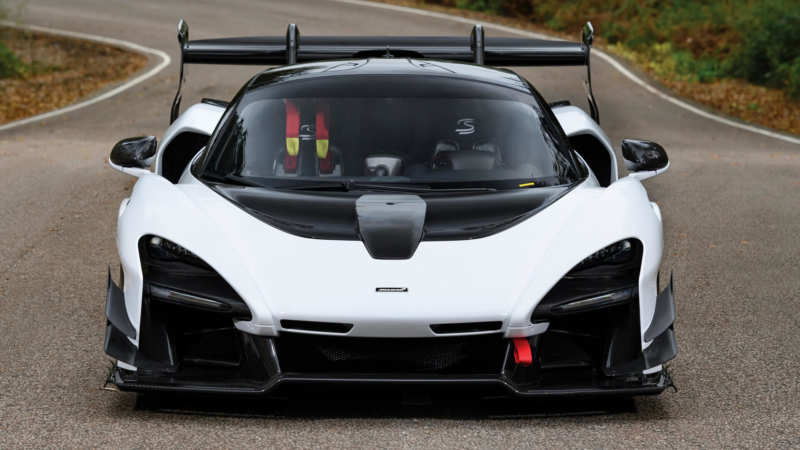 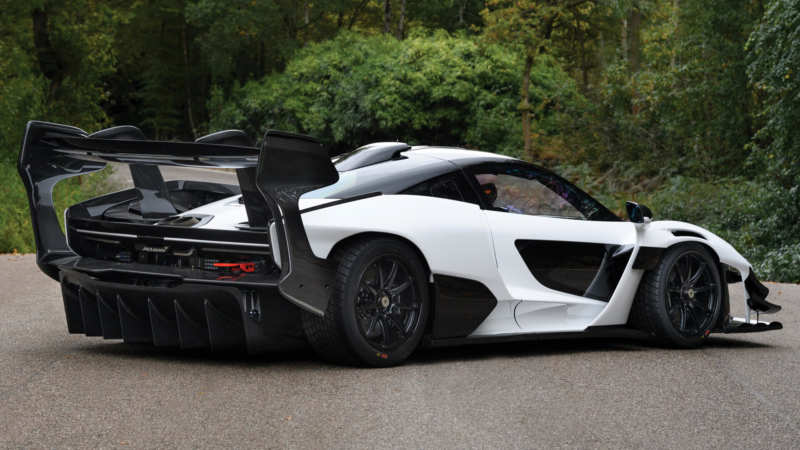 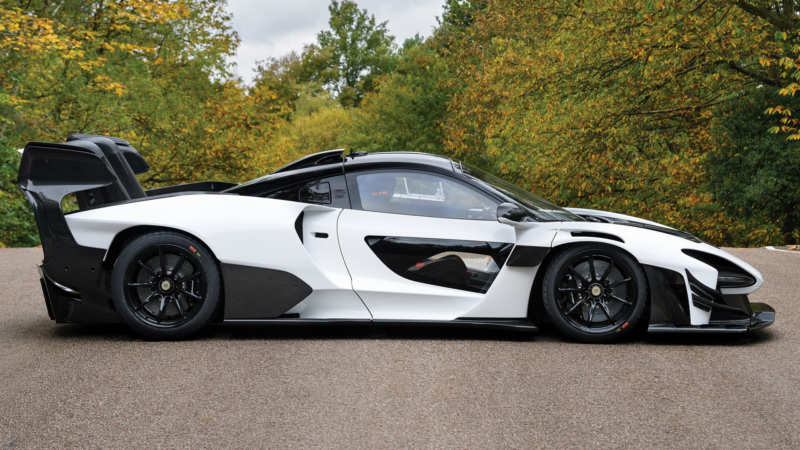 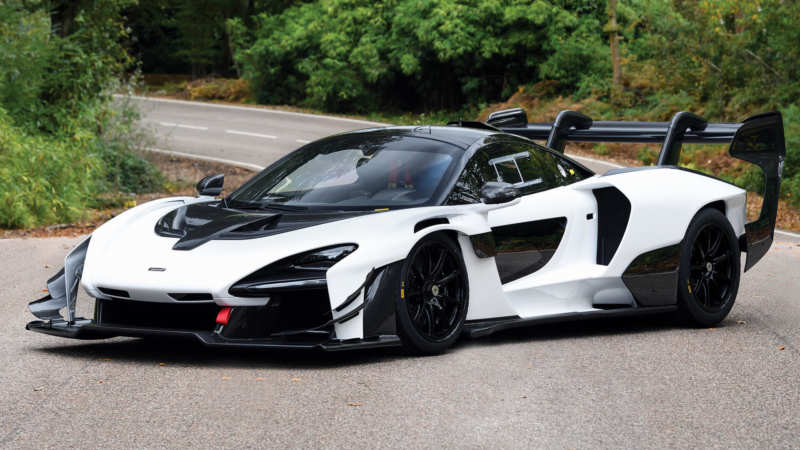 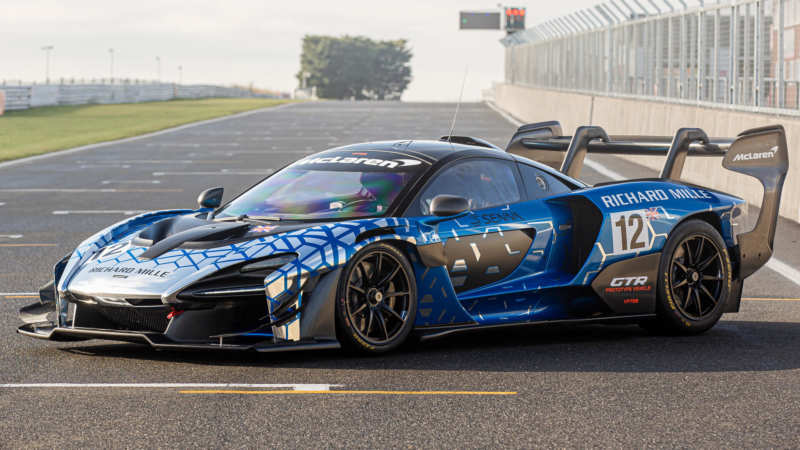 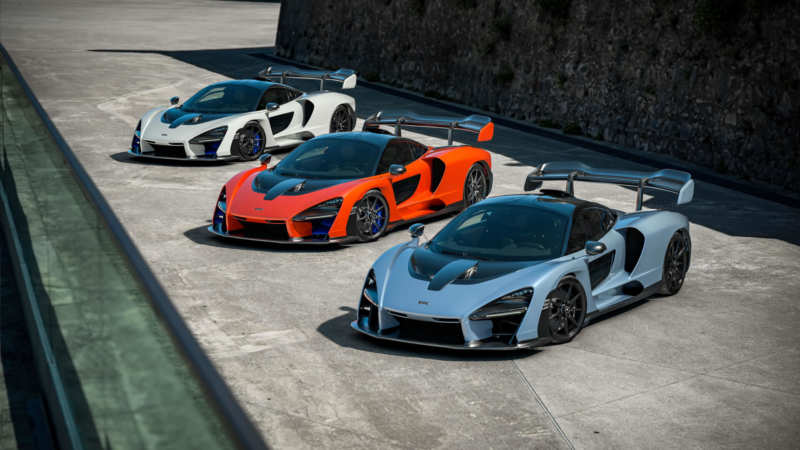 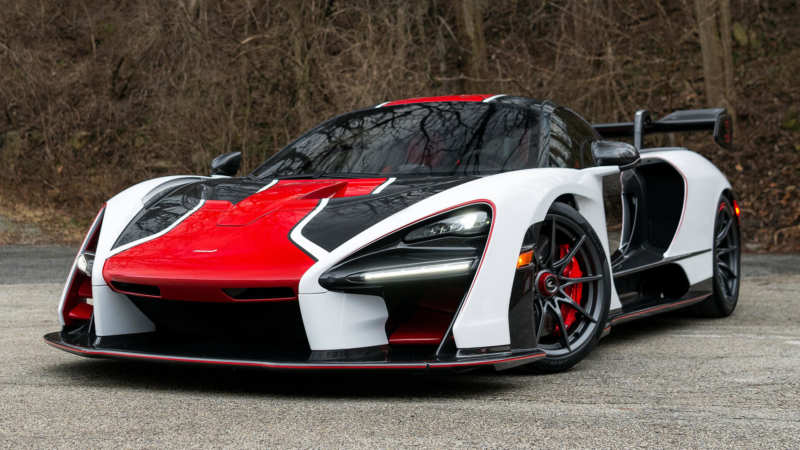 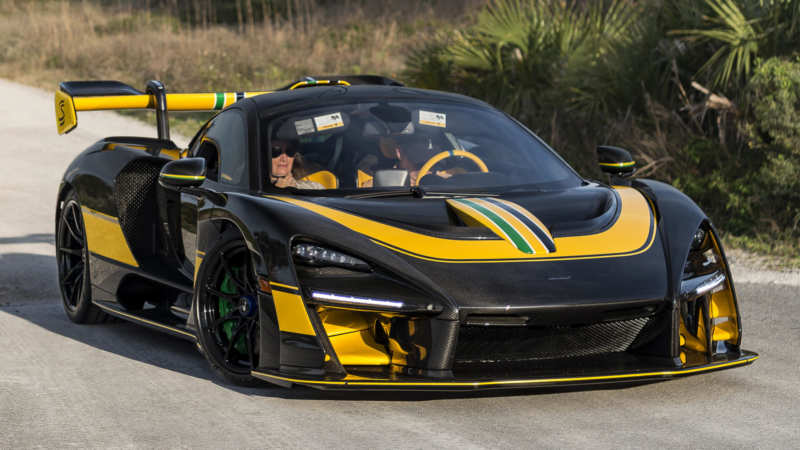 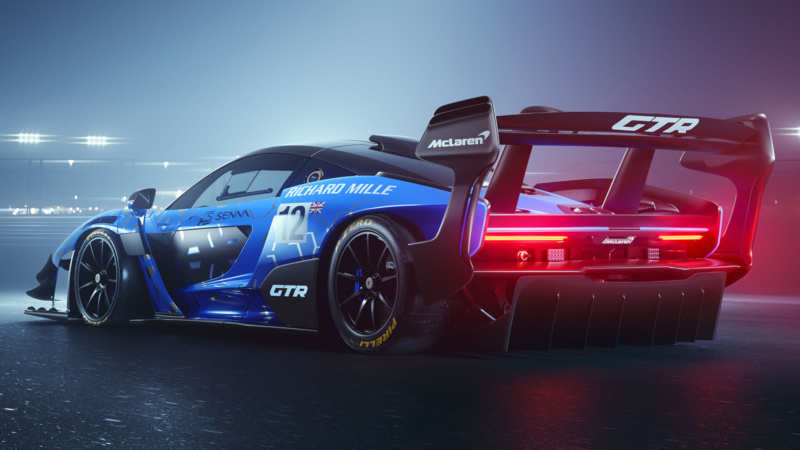