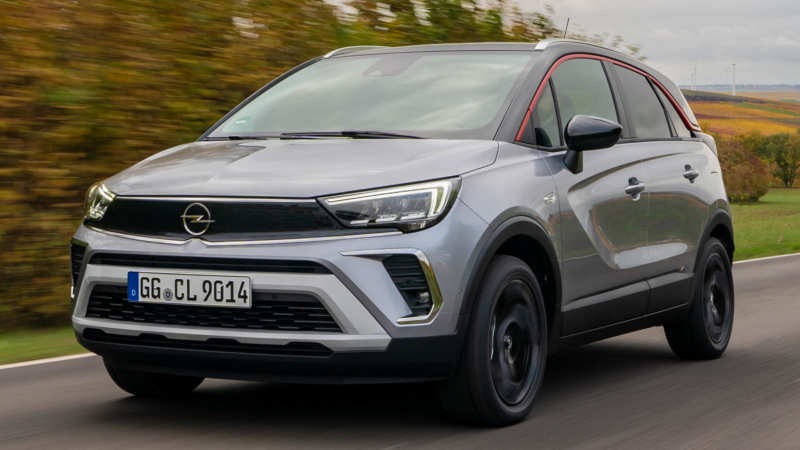 Opel Crossland X is a subcompact parquet car, which shares the same league with Opel Mokka, but is positioned as its more practical and less sporty analogue. Moreover, the car is deprived of an all-wheel-drive system that once again proves that it only belongs to the city. Opel Crossland was presented for the first time during the online presentation in January 2017. It was the result of cooperation between General Motors and PSA.

But already, in 3 and a half years, Germans decided to release an update for their crossover. The restyled Opel Crossland is planned to start selling in the first half of 2021. On the Russian market, the car should also get, but so far, there is no exact information about the timing and prices. Therefore, we will first talk about the pre-restyling Opel Crossland X, which is still available for purchase. After we will describe the changes of the updated version. The entire model range of Opel.

Look at the photos of Opel Crossland 2020. You can feel the signature design concept of the German manufacturer. Still, there are also non-standard and attractive solutions, which simply can not be ignored. The front is equipped with a traditional German car radiator grille. In the center, engineers have placed a massive brand emblem, from which on the sides come the wings.

Pretty stylish and modern turned out the front optics Opel Crossland X, which boasts adaptive LED elements. The front bumper of the German parkette has massiveness. The bumper itself turned out to be austere and brutal. The central part of the bumper is equipped with a cutout for a massive air intake. On the sides, it was decided to install niches for “fog lights.” 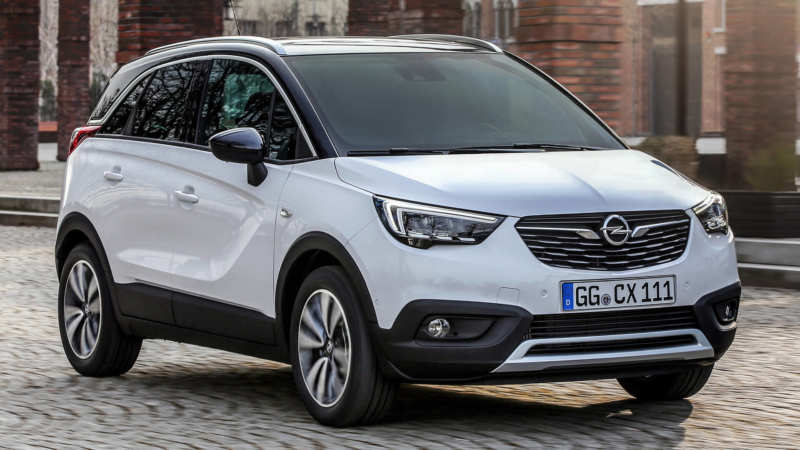 The side of the German crossover is also beautiful and unusual. The design of the sides of the body is original. Separately we should say about the attention-grabbing bumpers. Many modifications have a different color above the window frame, because of which it seems that the car “floats.” The upper edge of the side windows is limited by a chrome strip, which makes a bend in the rear pillars’ area.

In Russia, many motorists like Opel Crossland. The height of the ground clearance is quite impressive, 200 millimeters. And the crossover is based on 16-inch wheels from light alloy. However, as a separate option, it is possible to install 17-inch “rollers.”

The high ground clearance of the Opel Crossland X 2020 is perfect for Russian roads. However, you should not use the urban crossover as a real off-road vehicle. 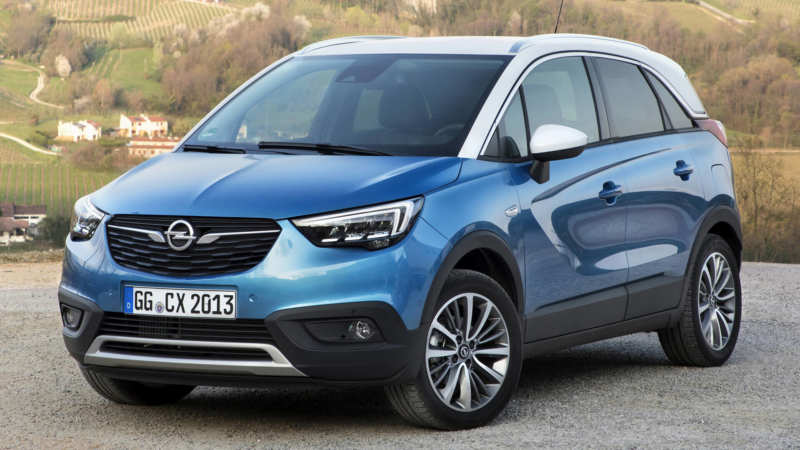 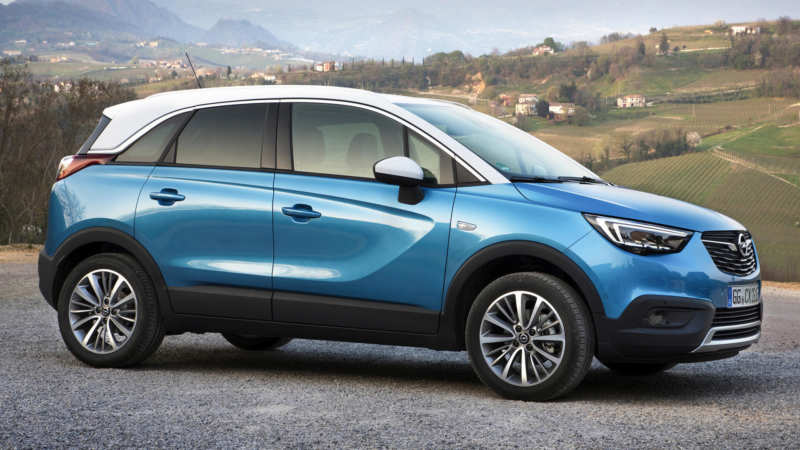 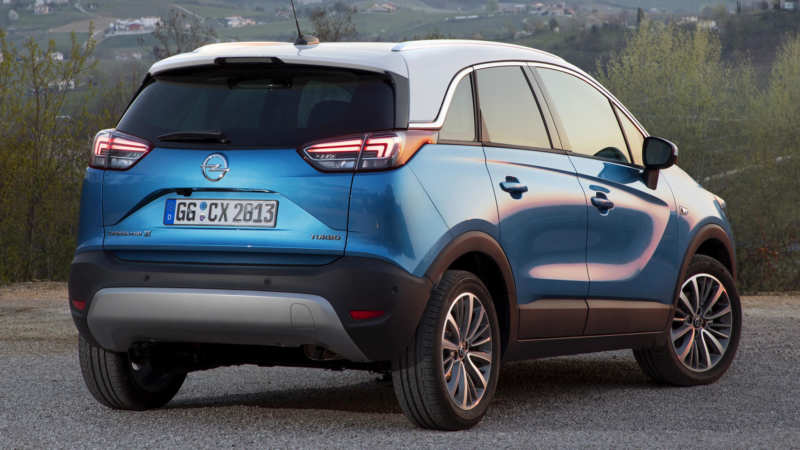 The rear boasts high-mounted lights, complemented by an LED pattern. In terms of style, they are identical to the front optics. The same massive bumper, as in the front, is also present. Although the car is not positioned as an off-road model, the rear bumper has protective plastic at the bottom.

Engineers decided to make the shape of the luggage compartment cover rectangular, which should positively affect the loading/unloading of transported cargo. Two little fog lights of horizontal form were installed in the body on the sides of the protection. Under the security, the exhaust pipe is barely visible.

The interior has a family and austere Opel style. There is a laconic design of the front panel, equipped with a pronounced horizontal architecture. A similar interior design of Opel Crossland X could be observed by many at the car show of other company models. Here you can refer Opel Astra or Opel Insignia. A 3-spoke multifunction steering wheel welcomes the driver.

Next, the engineers installed the dashboard in “recessed” wells. Between them, there is a computer monitor, which displays all the necessary information about the car. The “German” central panel has an 8-inch touchscreen multifunctional display, which works with the navigation system, Apple CarPlay, and Android Auto interfaces. 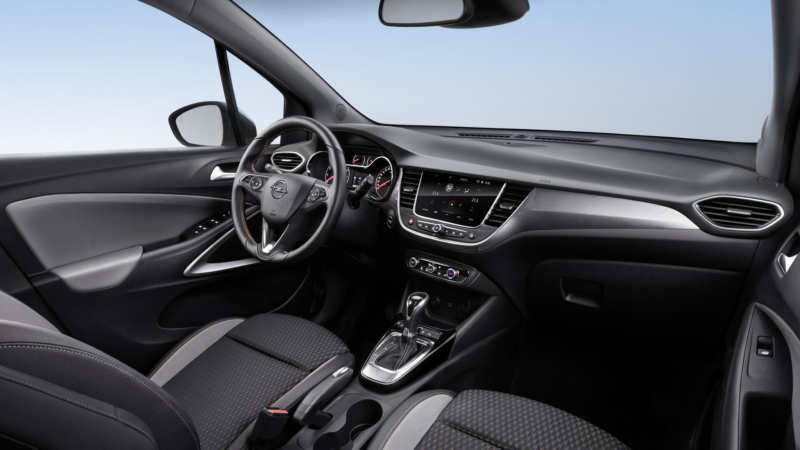 There is also a Wi-Fi hotspot and wireless charging for mobile devices. After all, this is a modern car. On the sides of it, there are two ventilation system deflectors. A button control panel “music” is installed under them, around the tuning knob in the center. Not far away, you can notice the key “emergency stop.”

The engineers enclosed all this in rounded V-shaped chrome trim. Under all this, there is a place for the “climate” control unit, which has three setting pucks and extra buttons. At the junction of the central tunnel and the console made a large niche with connectors for charging electronic devices. The main tunnel takes the beginning from the transmission control keys. 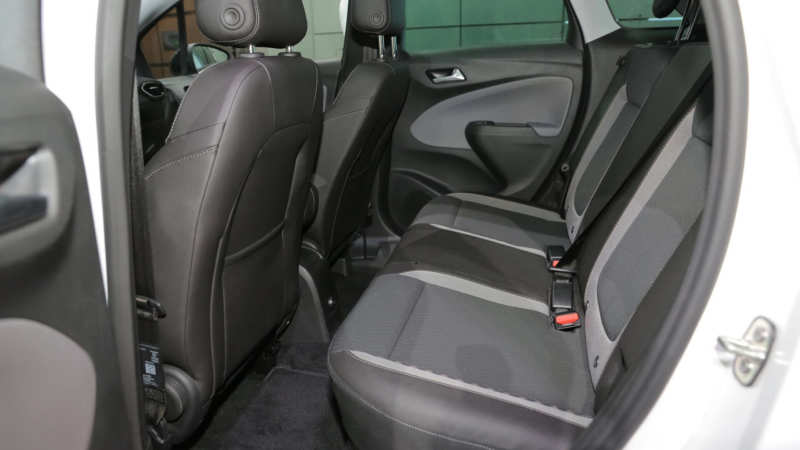 You can also see the gearshift lever handle. There is a handbrake near the driver and near the front passenger – a pair of deep cup holders connected. Between the front seats, there is a compact armrest, inside which there is a glove compartment. The seats boast certification from spinal column doctors and therapists. This shows that sitting in such chairs is not only comfortable and pleasant but also useful. They also have a wide range of adjustments.

Sitting on the second row of the Opel Crossland 2020 is also comfortable. The seats can be moved around the cabin at a distance of up to 150 millimeters. Although it is possible to sit three people, only two can sit comfortably. The luggage compartment’s volume is 410 liters by default, but if you move the rear sofa forward, the figure will grow to 520 liters. With the back sofa retracted, the volume of the trunk will make 1,255 liters of usable space.

The company has provided a wide list of engines that meet Euro-6 environmental standards and run on both gasoline and diesel fuel. The gasoline list starts with an atmospheric three-cylinder 1.2-liter engine that gets a distributed injection system, 12-valve timing and variable valve timing. This allows the base engine to produce 81 horsepower (118 Nm).

Next comes the 1.2-liter gasoline 3-cylinder version, which already has a turbocharger, direct “power” system, 12-valve timing, as well as the technology of variable valve timing. There are two variants of boost:

Fuel consumption of Opel Crossland X with gasoline engines is 4.9 to 5.4 liters per 100 kilometers. 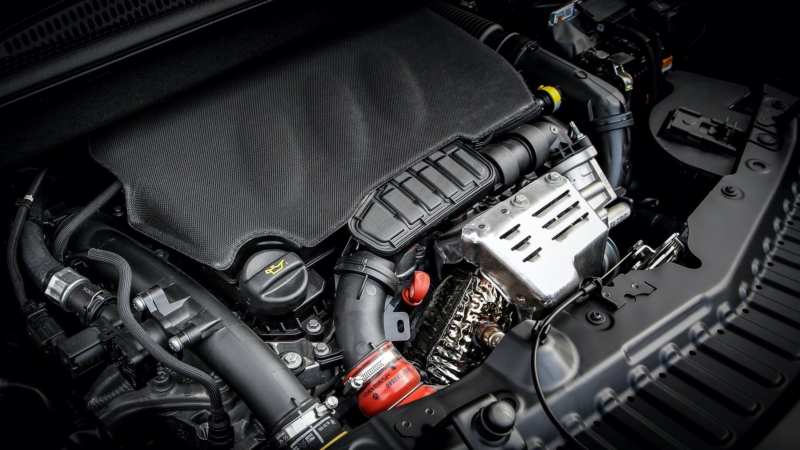 For diesel enthusiasts, the Germans decided to install an inline four-cylinder 1.6-liter powerplant with a turbocharger, battery fuel injection and 16-valve DOHC type timing. There are also two “pumping” options:

The diesel “engines” consume about 3.7-4.0 liters of diesel fuel per hundred kilometers of road. The Opel Crossland X’s technical characteristics allow you to use the car without any problems in the urban area.

All engines are equipped by default with a 5-speed manual transmission (the 120- and 130-horsepower versions have a 6-speed transmission). All torque is transmitted only to the front wheels. Gasoline 110 hp version as a separate option can be equipped with a 6-band automatic transmission. In order to accelerate from a place to 100 km / h crossover needs 9.1-14 seconds, and the speed limit is 170-206 kilometers per hour.

The compact model decided to build on the front-wheel-drive modular platform EMP2, which many know from Peugeot and Citroen models (but only on Opel for the first time decided to apply its shortened version for the cars of class “B+”). The front part is equipped with independent suspension of the McPherson type. The rear received a semi-independent structure with an elastic beam (transverse stabilizers are everywhere). The subcompact Parkett is easy to steer with the help of rack-and-pinion steering, which has an electric control booster. The braking system is equipped with disc mechanisms (the front ones are ventilated).

Also, the car has programmed deformation zones during frontal and side impacts. The body itself has a lot of high-strength steel.

Sometime later, the Germans decided to release a restyled model of the compact parker Crossland X, which has received a slightly different appearance and lost the letter “X” in his name.

The main innovation in the body’s appearance can be called a revised design of the front end. The restyling brought the Vizor stylistics, which the Opel Mokka demonstrated for the first time. A similar “face” will be installed on all other models of the company in the future. But what is Vizor? It is a visual association of the headlights with a special black panel. For this reason, the composition looks like a helmet. The car’s radiator grille is placed on the bumper, which has been changed a lot after the update. It is equipped with a trapezoidal insert in the center and vertical niches with fog lights on the sides.

It’s nice that already the basic equipment of the updated Opel Crossland 2021 has LED headlights, visually combined with a black plug with a German brand name badge.

After the upgrade, the Opel Crossland 2021 is now equipped with 16- or 17-inch alloy wheels. There is a version of Opel Crossland GS Line+ for those who like sporty design, which provides a black grille, rails, specific decorative elements, and unique 17-inch “rollers.”

The rear has changed not so enormously. There is now a black glossy overlay with a compact brand logo between the arches, and the light units themselves have been darkened. The nameplate is no longer in the corner but on the central part. The rear bumper also has a more embossed protective plate.

German engineers did not dare to change the interior of restyled Opel Crossland 2021 significantly. Restyling allowed equipping the car with an upgraded multimedia system, which has received improved graphics and expanded functionality. However, the diagonal of the displays have not changed. The development department has also added the option of upholstery (Alcantara). In all other respects, the car remains the same. 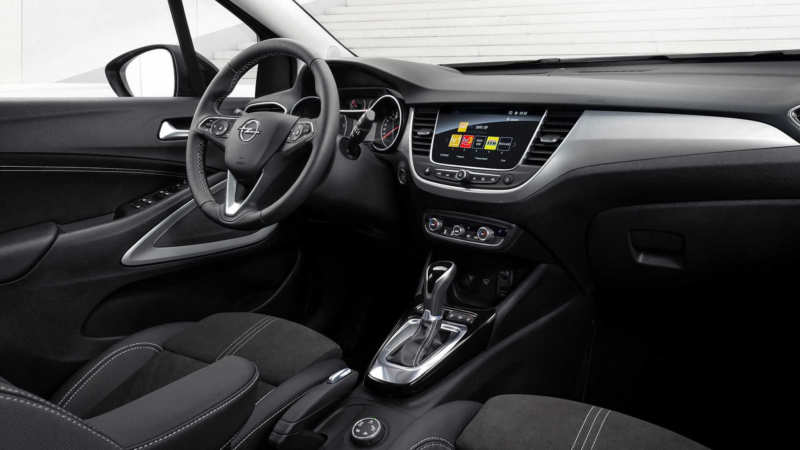 The engine range has not changed. The restyled model is based on the old French PF1 platform, which has been slightly modernized. As a result, it is equipped with new springs and shock absorbers, as well as reconfigured steering and another intermediate shaft. According to representatives of the German company, after such improvements the car became more comfortable and more driveable.

Unfortunately, the Opel Crossland 2021 didn’t get a four-wheel drive system, but it now boasts an optional IntelliGrip system that can change how the traction control system works depending on the chosen driving mode: Normal, Mud, Sand, Snow and ESP Off.

As mentioned above, will start selling cars in the first half of 2021. The price of Opel Crossland, as well as the equipment level of the updated model is still questionable. But there is confidence that the car will be delivered to the Russian market. But it should be understood that it will be possible to buy Opel Crossland for at least 1 300 000 rubles. Pre-restyled version already in the basic version was equipped: 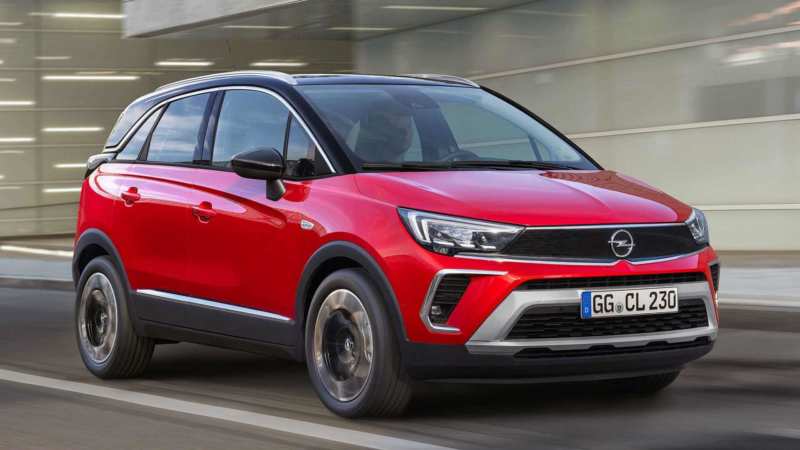 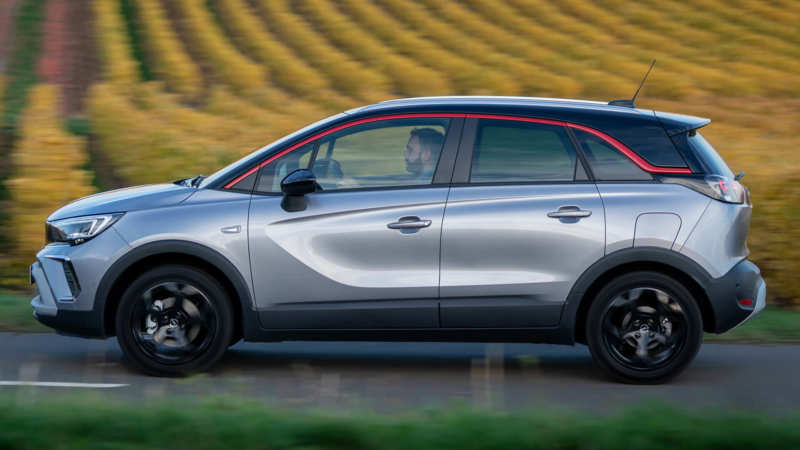 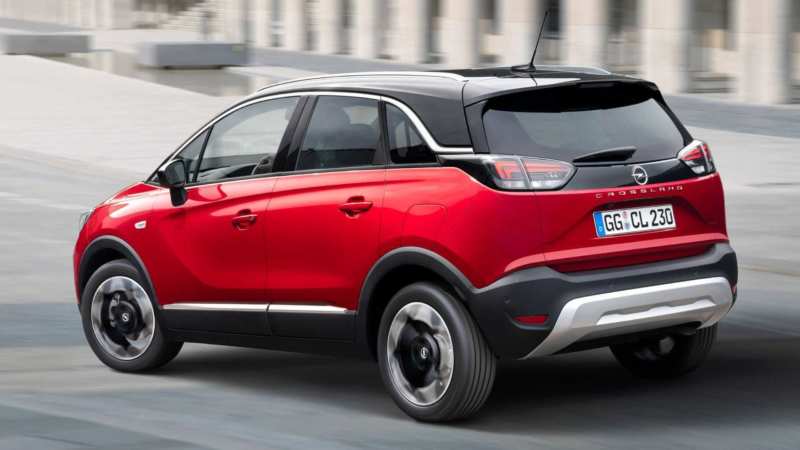 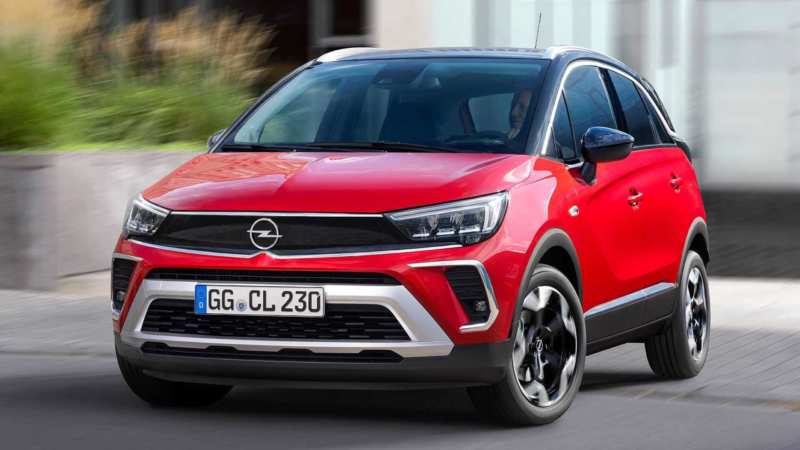 The “German” does not have so many competitors, but they are serious enough. Thus, as a competitor of Opel Crossland 2021 can be MINI JCW Countryman, Nissan Kicks, Skoda Kamiq, Nissan Qashqai, Mazda CX-5, Hyundai Creta.

What would you like to say in the end? Suppose the past model was not officially offered for the domestic market. In that case, there is every chance with the updated Opel Crossland 2021. Especially since German marketing has become better in terms of appearance, equipment. They have also worked a bit on the interior and running gear. This car is ideal for urban purposes.

Also, it has a roomy, high-quality, and comfortable interior with very comfortable seats. Although the car is not equipped with all-wheel drive, it allows you to feel confident thanks to the unique IntelliGrip system and secure ground clearance height. The 2021 Opel Crossland has every chance of being loved by many car owners. At least this is what the German company is counting on, updating its practical and compact model in time. 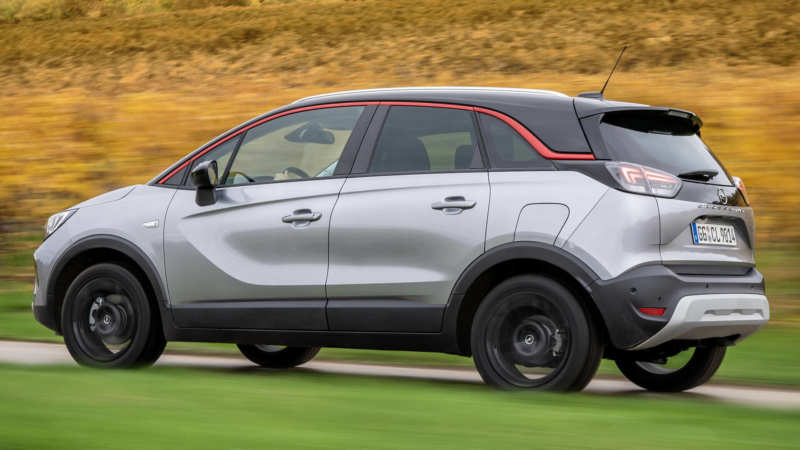 We suggest you read the article: History of Opel