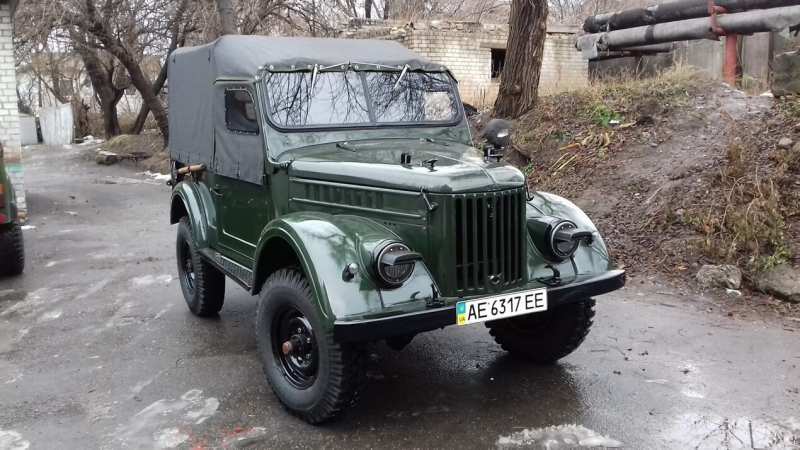 GAZ-69 is a four-wheel drive vehicle. It was one of some cars, which was produced according to the 4×4 formula. This model was produced by the Gorky Automobile Plant. The model was put into mass production in 1953, and all in all it was produced for almost twenty years.

Following this, the employees of the company did not create such a plan, but the car turned out to be surprisingly successful. Although, the citizens of Gorky were assembling the 69th model not so long ago, the production was transferred to the Ulyanovsk Automobile Plant in 1956. The whole model range is GAZ.

Then Ulyanovsk specialists were busy creating small off-road cars, which, however, they still do today. It would not be superfluous to add that UAZ 69 is called a “goat”, but immediately after the cessation of production of the 69th model they started to produce another, not inferior in popularity model UAZ 469, but the development was already done at the Ulyanovsk Automobile Plant.

Over the whole period of time it was possible to create more than 600 thousand off-road cars with GAZ-69 index. This includes various modifications. Many motorists like the restoration of GAZ 69. The debut tests were held under the supervision of the State Commission in September 1951.

Due to good cross-country ability and unpretentiousness, the model could become a benchmark for all world cars. Among the advantages of GAZ-69 was the availability of a short base, low weight, four-wheel drive system, excellent height of ground clearance under the bridges of the car, which gave the pickup the opportunity not to be afraid of difficult road conditions. 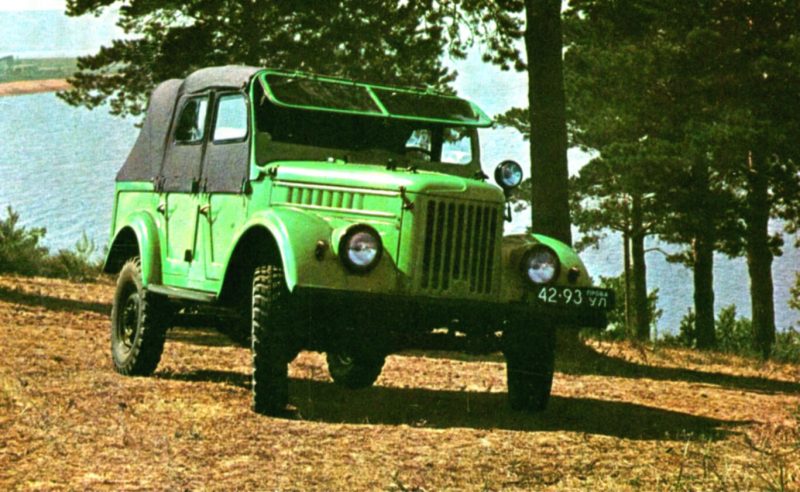 On the technical part and, especially, on the cross-country ability of the car with all-wheel drive GAZ-69 could envy, if not all, then many cars around the world.

As a basis for a passenger car, the specialists of the Gorky Automobile Plant decided to take the 67th model, which proved to be a good one during the military and the first post-war years. As for the units and assemblies of the new vehicle, they were borrowed from Pobeda, ZIM and GAZ-51 truck.

That’s why the model differed by simply phenomenal terms of production. From “Victory” we took a power unit, which underwent some improvement, which resulted in 55 horsepower. Transmission of the new off-road vehicle was also borrowed from the famous GAZ-M-20. 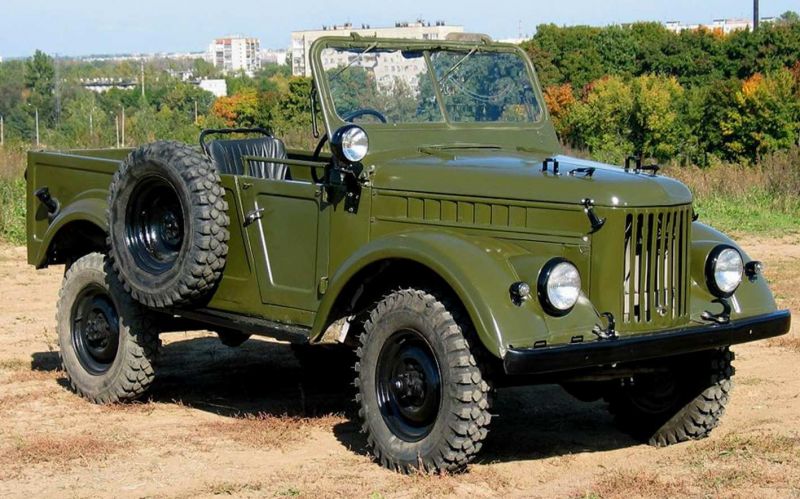 As a novelty, the machine had a new device that provided preheating. The interior was equipped with a heater, and for the front glass provided for blowing warm air. Such improvements provided an opportunity to use the lawn in any season and any weather.

The 67th model was created for army needs, but the Lawn-69 was used for the national economy. The machine was developed during 5 years (1948-1953), and its prototypes had the name “worker”. The car among the people was called a “goat” because it jumped when driving on bumpy terrain and bumps, as well as because of the short base and high landing.

It was dangerous to move at high speed in a “pickup truck” with such a jumping speed – there was a high probability of overturning. Production of GAZ-69 in all-wheel drive version was mastered in two configurations: 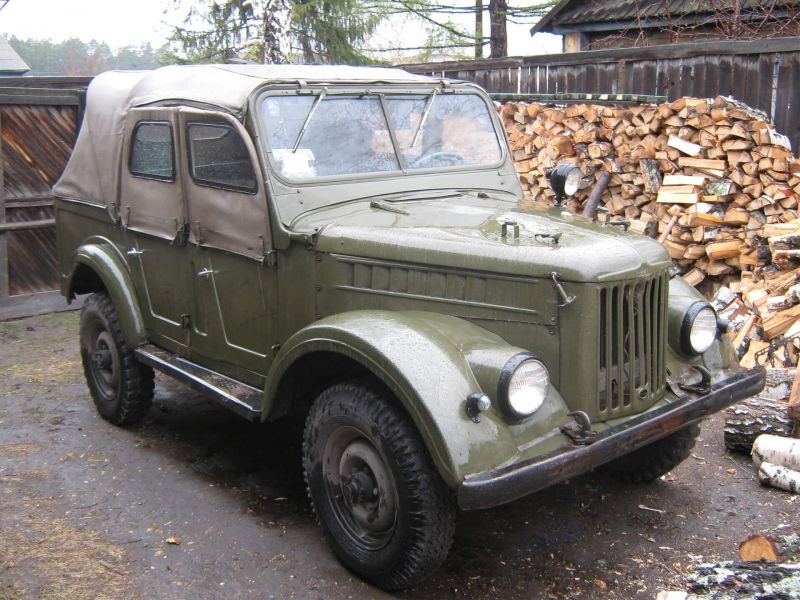 The five-seat model of the Lawn, which received the index GAZ-69A, was nicknamed “commander’s” or “chairman’s” by the people, depending on the place where it was used – in the military elements or in agricultural areas. However, the car itself was clearly not a city car, however, there was no point in driving it along the city road.

The cross-country ability, which the “goat” possessed, was the object of envy of many off-road vehicles all over the world – 69th model with excellent agility overcame all kinds of fords and crawled out of the most impassable mud areas. The second half of the twentieth century allowed the 69th model to be used as a mobile military vehicle inspection vehicle.

Civilian version of many models received in the police department. The police received specially designed cars, where there was a hard top. The latest modifications had a division of the interior into two areas – a driver and a patrol policeman were in front of the vehicle, and offenders were usually sitting on the back.

Despite the fact that the interior of the GAZ-69A car was considered quite free, it was not so convenient to sit in it, partly because of narrow doors. It is clear that there is no abundance of comfortable elements here, but there is everything you need.

On the front panel of the lawn there is a minimum number of devices, among which there is a speedometer, a pointer, which informs the driver about the level of remaining fuel in the tank, and an ammeter, which shows the battery charge level. Transmission tunnel is very strong on the floor, but, in principle, does not interfere. 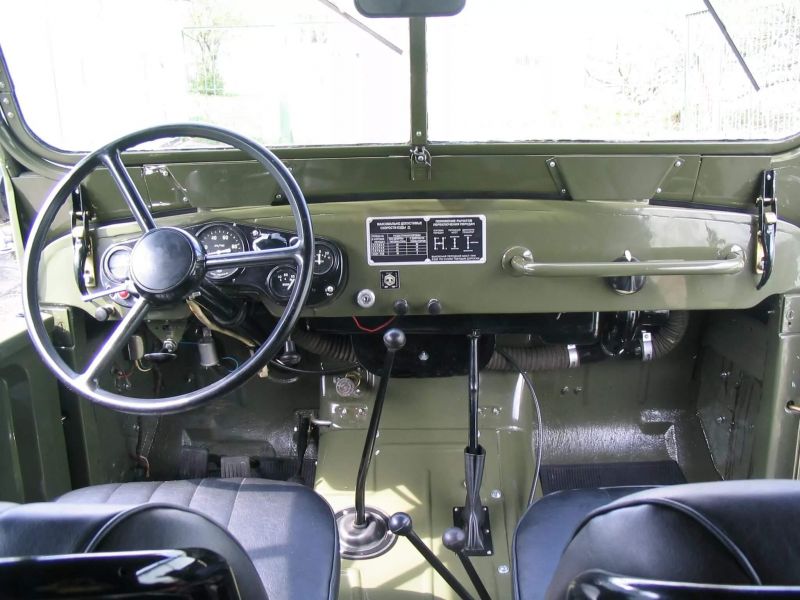 He’s looking at a three-spoke big steering wheel. To the right of the dashboard you can find a lock for the ignition key. The transmission tunnel itself is equipped with a manual transmission lever.

Opposite the driver’s seat, there is a handle on the torpedo to hold on to, because the car was often shaking, so it was just necessary to hold on. The upper part of the doors was made of tarpaulin and the bottom part was made of metal.

GAZ-69 salon did not receive any unnecessary details, and the front panel has only the most necessary appliances.

In the cold season it was planned to have a heating system, which was very lacking in the past cars. And in the summer period a sun visor was provided. The luggage compartment lid turned out to be hinged. When it had an open position, it made it longer than the floor of the trunk and provided the opportunity to transport even oversized goods.

The seats were covered with leatherette and, although they were soft, there was a flaw in the slippery material, so if there was an uneven road surface, it was quite difficult to sit on the chairs. The lawn had a spring suspension structure, so the car sprung on a bumpy road, and along with it, everyone inside the car “jumped”.

In order for the windshield to be cleaned of external contamination, a windshield wiper was installed, the trapezium of which was mounted on top of the glass. In order to protect the interior of the vehicle from bad weather, the designers provided for the presence of a covering, which was a tent made of dense material (tarpaulin), which does not get wet. The latter was stretched on the body frame of GAZ 69 made of metal with the help of loops, which were “soldered” on the edges of the coating and firmly fixed at the base.

The engine on the model was a lower-valve 2.0-liter engine, which produced 55 horsepower. The engine was developed on the platform of the six-cylinder engine Gason-11, which was used on the famous truck GAZ-51. 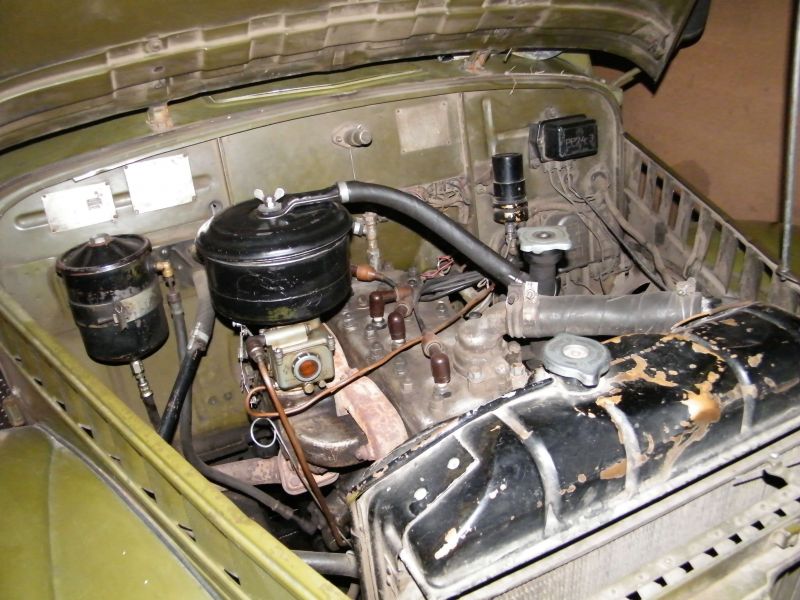 The unit itself has four large-diameter cylinders and operates on low octane fuel (gasoline) A-66. The power plant was previously installed on the Pobeda car. The water pump had a metal solid fan impeller, which had 6 blades.

A manual 3-speed gearbox with rear gear was installed as a transmission. The all-wheel drive system on the 69th model is not permanent. The front axle can be engaged by means of a dispenser.

As mentioned above, the suspension was a bit harsh because of the springs, because it was not a truck, but the model was not intended to be used in urban areas and on a flat road. The off-road vehicle had a frame construction, and two axles were attached to the frame together with the powertrain.

All two axles are drive axles and there is no inter-axle differential. The frame has a rectangular shape and has six transverse reinforcements. The front axle can be equipped with Bendix-Weiss ball screws.

Although there was no hydraulic power steering in the machine’s structure, it could be operated without any particular difficulty, even if the pickup was standing still.

It also did not have a brake booster, so it can be called rigid enough. It is clear that all wheels are equipped with drum brakes.

Although there are not many Soviet all-wheel drive vehicles, GAZ-69, they can still be purchased from hand. And not all models are in the hands of restorers or in the museum. To buy an SUV of the Gorky Automobile Plant on the move, you will need about $3064. The higher the price tag is, the better the quality of the car itself. 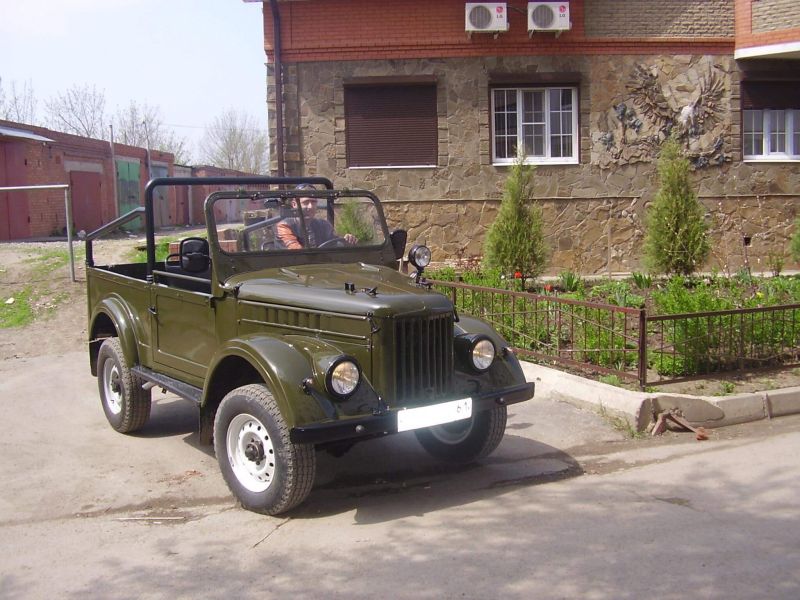 Many people buy these vehicles to be tuned afterwards, but so well that many people just think that a new GAZ-69 has appeared. It is not so hard to do, because the drawings are available on the Internet. There are also a lot of videos of rarity and unchanged models, as well as cars that have survived tuning.

GAZ-69 is a four-wheel drive off-road Soviet car with a rich history. The model was so often used that it even knew how to jump with a parachute, yes, you didn’t think so! The car was flying, parachuting and even swimming. By the fact that the car had a small height when the roof was folded, and had a small overall size, the 69th was perfectly able to fit into the transport plane and the helicopter.

For example, the cargo department of the medium helicopter Mi-4 was designed just to transport this vehicle. In order to parachute the vehicle, protruding elements such as a spare part and a bumper were removed from it. The vehicle itself was loaded onto a specialized platform and it automatically landed on any surface. 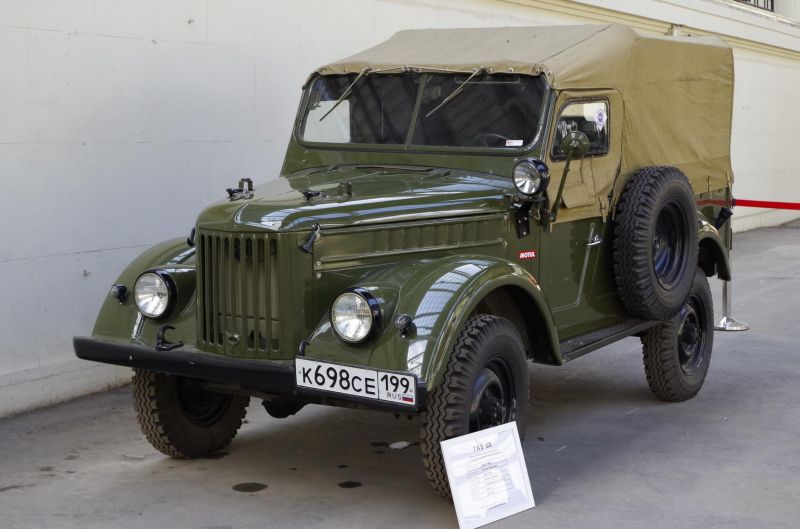 It was very convenient, fast and practical. Also the designers made a floating version on the platform of the 69th lawn – GAZ-46, which many people know as MAV (small waterfloating car). Its production continued for five years. The production was stopped due to the move of the car to Ulyanovsk.

As it seems, the model was actively used not only for the needs of the Soviet army, but also for the needs of the civilian population. With such dimensions, good cross-country ability and all-wheel drive system it had no competitors in those years. Despite the considerable age, this car can still be found.

It is especially popular among fans of fishing, hunting and recreation. Many motorists remake the vehicle with their own hands. Car drawings are easy to find. Video with examples of tuning, as well as remodeling GAZ 69 are available on the Internet. Quite a lot of people like the technical characteristics of the car GAZ 69. 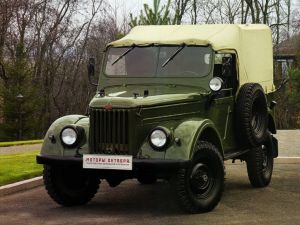 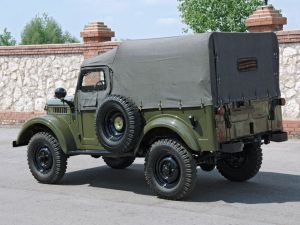 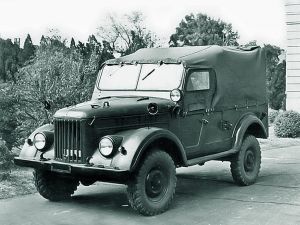 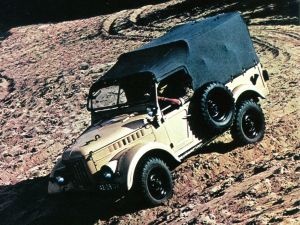 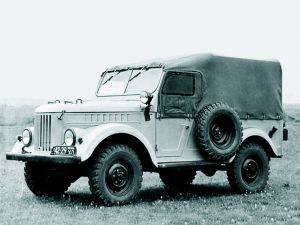 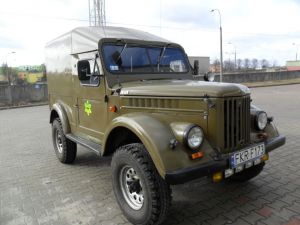 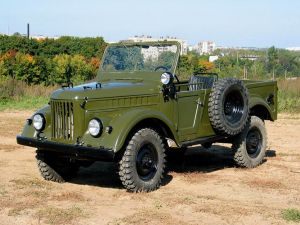 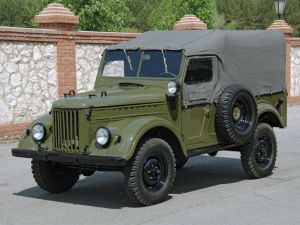 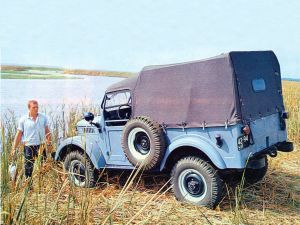