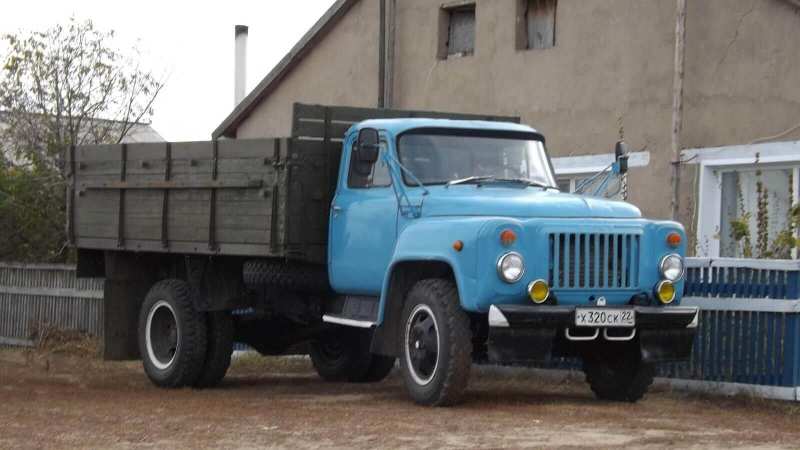 GAZ-52 is a Soviet truck of the medium-duty group of trucks of the third generation of the Gorky Automobile Plant. The chief designer of the vehicle were A.I. Shikhov, V.D. Zapoinov. The leading designer of the V-shaped eight-cylinder power unit was P.E. Syrkin. The whole model range is GAZ.

The end of the 1950s and mid-1960s were the plans of the management at the conveyor plant for the production of three generations of trucks, which were unified among themselves. The new GAZ 52 was considered to be the base model, which became the successor of GAZ-51A truck, where there was also a 4×2 wheel formula and a payload of 2,500 kilograms.

When they created the truck, they tried to take into account that the main area of application of the truck would be urban transportation and operation in rural areas. Taking into account these moments, the design features of the truck should have provided good maneuverability and good cross-country ability together with smooth running, because asphalt roads could be found quite rarely. 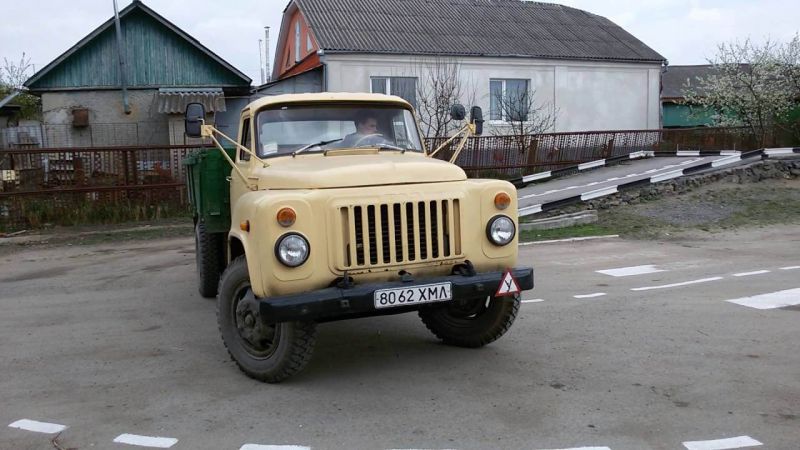 The creation of small and medium-duty trucks was a necessity for the whole country, as it was a full-fledged process of restoration of the national economy, which destroyed the wartime, as well as the need for active construction of residential towns. Machines that could function in the city were simply very few, and freight traffic as part of the road train was not developing either.

Therefore, the design staff was instructed to develop a draft truck, which were originally intended for the transportation of various goods in the city and rural areas. There were versions of GAZ 52 dump trucks and flatbed trucks. Thus, a new model GAZ-52 was created on the platform of GAZ 51 A, which was produced since 1955. 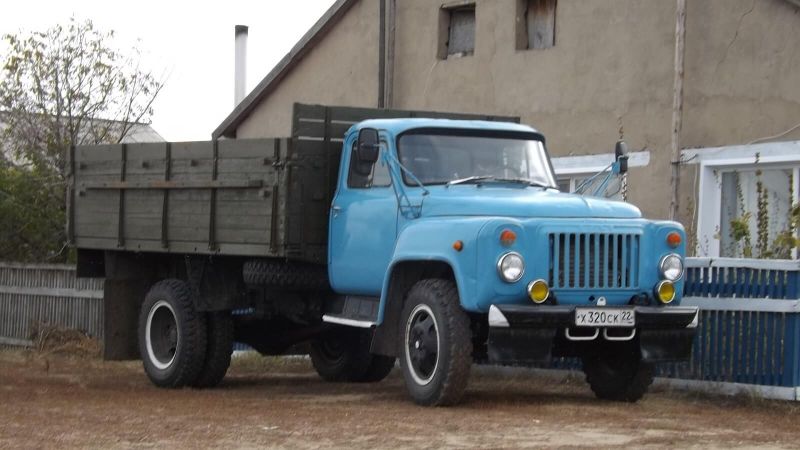 A little later, the car was able to successfully replace the previous family. The new truck was distinguished by another cabin, a design solution that was a bit similar to the American trucks of the 1950s. In those years, many did not even assume that this design would be in demand for the entire time, and this is a little – not a little – 30 years.

The developed all-metal cab for a small truck, which had a bonneted layout, was equipped with an improved windshield. Compared to the flat V-glasses installed on the predecessor, the new one gave the driver a panoramic view. The cabin was made for a couple of people.

The new cabin had to be unified for all bonneted trucks of the Gorky Automobile Plant, and the external differences were only in a few elements. Moreover, not so many people could know about them, because quite often the GAZ-53 could be confused with what, by the way, the majority of the most important components of the vehicle were unified with, and GAZ-52. 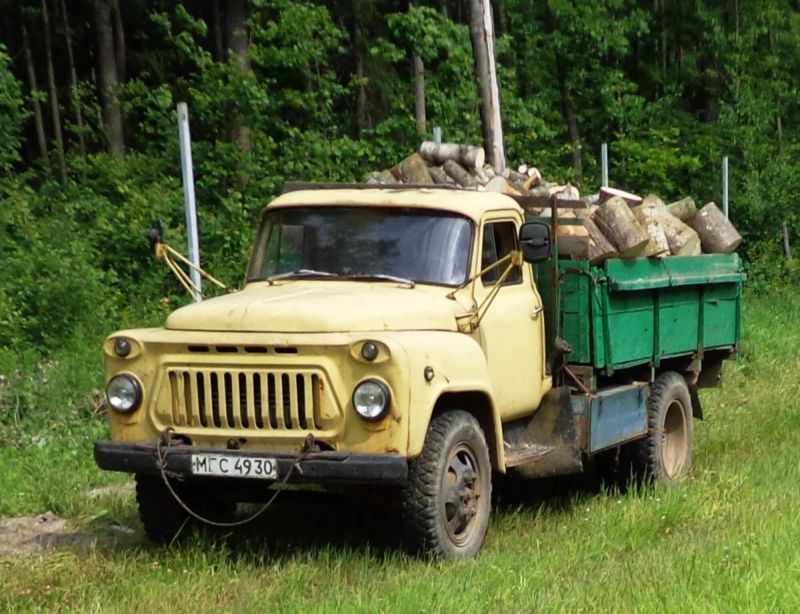 The debut cars of this family were quite similar to the ZiLs produced before – the front lights were located at the bottom and the headlights were strictly above them. When 1975 came, the company’s management made a decision to modernize the appearance of the cabin, so that the lamps moved upwards, and the appearance of the grille began to resemble a “smile”.

Nine years later, since 1984, the lining of the grille of GAZ 52 trucks was still changed – its holes were slightly extended, and the turning lamps shifted on the sides. With a similar appearance, 52 models were produced in conveyor type until the 1990s, after which they were replaced by restyled GAZ-3307.

By ignorance it is quite easy to confuse the trucks GAZ-52 and GAZ-53, because they have a lot of similar, especially in appearance.

The models of the debut years of production had only one round mirror on the left, which was installed on a single bracket. This mount is not certain, because of the vibrations it became weak, the mirror began to move and shake while driving. A little later it was replaced by an oval type, its dimensions grew.

The mirror was mounted on a triple bracket, which reduced its vibration. The same was done on the right side, which improved visibility. The main color-coding for the cab was the presence of sand and protective khaki. In 1960-1970s the variant of color-coating was replenished with “sea wave” and “coffee with milk”. 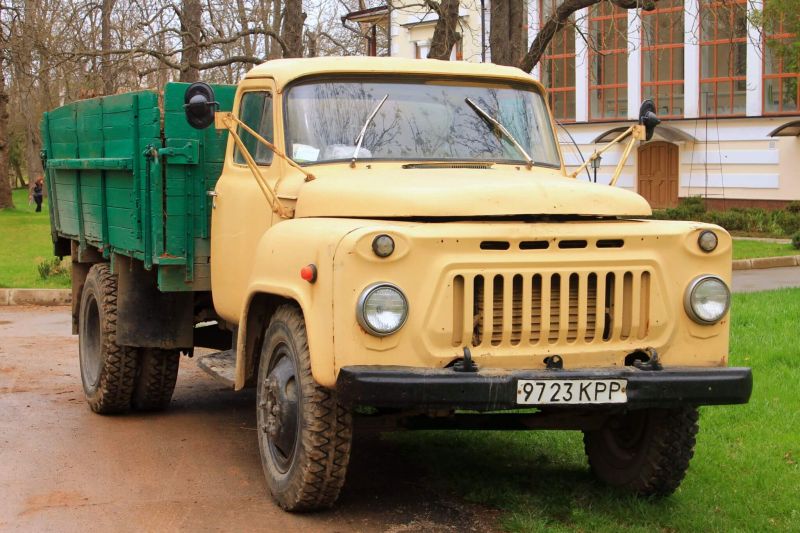 The year 1978 allowed to produce cars with blue color of the cabin. The same year marked the presence of stamped ribs, which most motorists could distinguish between 52 and 53 cars.

There was a difference in the wheel rims for the pair of cars – the rubber for the 52nd model was narrow and had 6 ventilation holes, and the 53rd model had 3 holes, and they were located at an angle of 120 degrees. However, despite the slight differences in appearance, the main difference between these vehicles was the powertrain.

It is clear that the cabin was not large, but the most important thing there was. On two doors, the glass could be lowered and raised, and the windows could be turned. The airflow could be directed in any direction during the movement. Among the peculiarities of the cabin is the ability to blow the front glass with hot air from the heater, as well as the possibility of installing vacuum wipers driven by a special pump.

The instrument panel looked quite simple, but for those years it was quite functional and fulfilled its direct duties. The instrument board had a fuel level, coolant temperature, oil pressure, speed sensor and ammeter. There was also an ignition switch next to it. 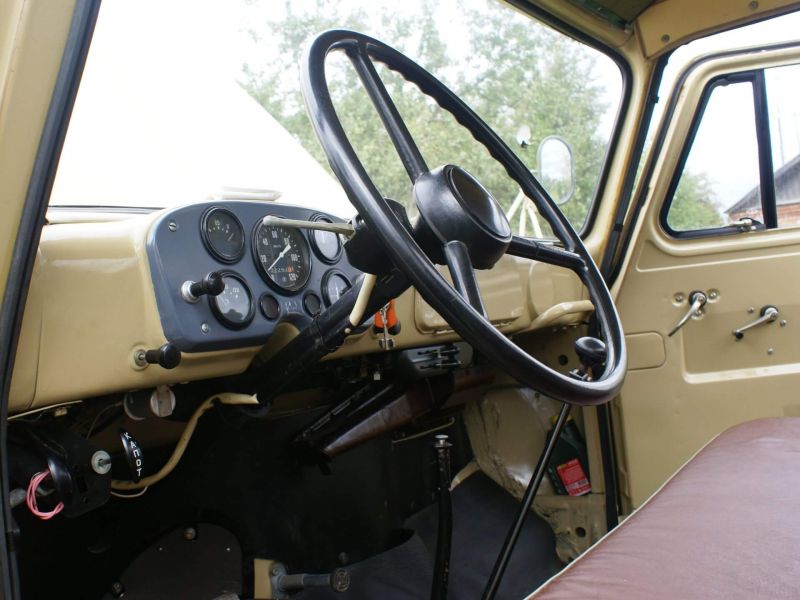 Today, the dashboards have huge dimensions, but GAZ-52 received a small, but quite informative one. There is a place for a glove compartment on the side. The turn signal lever was already installed on the steering column, which is very convenient, especially considering the fact that the switch was placed on the torpedo on the previous model, so it was still necessary to reach it, and this caused some difficulties, and the driver could be distracted from driving the truck.

However, the entire front panel was made of iron, which also applied to the door panels. There were no separate seats, only a full-fledged sofa with its backrest and seat raised, which allowed for the storage of various spare parts and tools.

The machines, which were used in the period from 1958 and 1959, were equipped with an internal combustion prechamber and flare engine. It is this engine that is considered the advantage of the 51st model. Back in 1937, specialists working at the Institute of Chemical Physics and the Central Institute of Aeronautical Engine Building, began to develop and implement options for more productive combustion of gasoline in the internal combustion engine with an external system of mixture formation, where there was a depleted combustible mixture in the prechamber.

A little later, these works have already been carried out on the vehicles of the Gorky Automobile Plant. The platform of the engine of the 51st model made it possible to design the GAZ 52 engine, where the cylinder head was upgraded and where there was an overhead valve arrangement. In addition, the cylinder head was equipped with a prechamber for each cylinder. 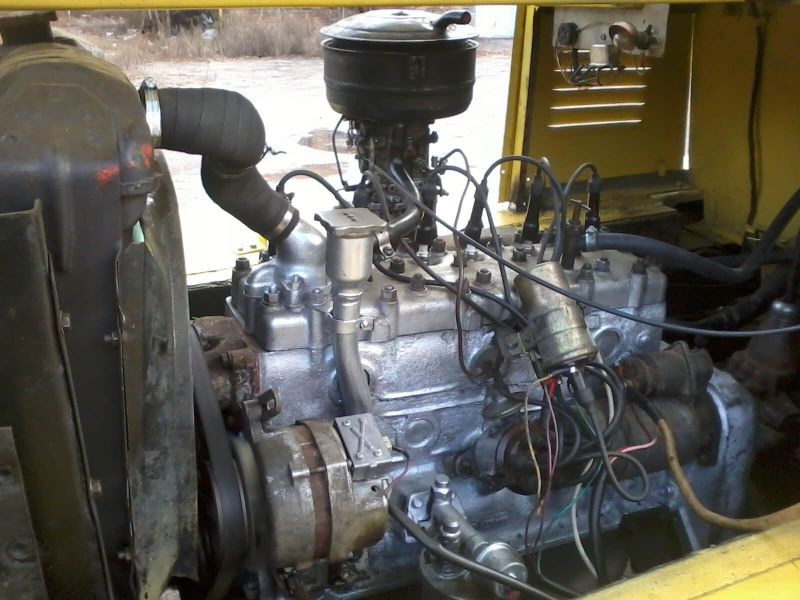 In the gas distribution system there was a chamber valve, through which air-flammable mixture was injected, which was already lit by an ordinary candle. After that the torch ignites the whole mixture in the main chamber. This process allowed saving up to 20% of the fuel, as they believed at the time.

It also seemed that this would significantly increase the output of the power pack together with the torque. But, as tests have shown, it was difficult to start the engine GAZ 52, to save fuel also failed, and in general, the unit was unstable. Moreover, the problems were created by the carburetor, which even at the enterprise itself, even competent specialists could not adjust or adjust in any way.

However, such failures did not stop the specialists, and they still brought the power unit to the desired state. The result was a 3.4-liter 85 hp engine, which had a torque at 3,000 rpm of 22.5 kg/m. This GAZ 52 engine allowed to significantly increase the dynamic component and make the car more economical.

GAZ-52 eats about 24 liters per 100 kilometers. Years later, in the 1990s, motorists noticed the trucks, which operated on diesel fuel. Many drivers began to install new GAZ 52 diesel engines, which differed in small price in maintenance.

The GAZ-52 power unit turned out to be easy to repair and unpretentious to maintain, which cannot be said about many other vehicles.

The new powertrain has been synchronized with a reliable and quiet five-speed manual gearbox. It had synchronizers in 3rd and 4th gear. The clutch is single disc and dry. Example photo from below.

It was decided to install a spring type, and later it was upgraded. The design staff decided to change the method of attaching the springs – after improvement the fixing was made together with rubber cushions. As a result, it was possible to reduce the pressure on the main plates during the twisting of the springs.

And in order to increase the cross-country ability of the trucks on a bad road, the engineering staff developed and implemented the latest rear axles, where there was a cam-type differential. This made it possible to pass more confidently through heavy road areas.

It has a hydraulic drive and a hydro-vacuum booster. All wheels are equipped with drum brakes only. There is a working and parking system.

The steering mechanism has a globoid type. A globoid worm along with a two-rowed roller. There is no hydraulic power steering. 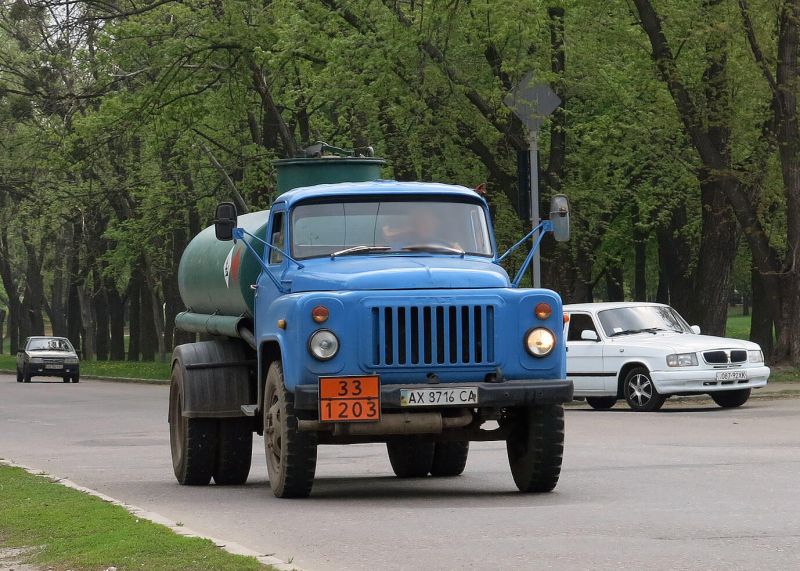 Despite the fact that GAZ 52 was made for the twentieth century, it is still often used in various industries today. Yes, the level of comfort may not be at a high level, and there are no newest technical features here, but the car copes with its direct duties perfectly.

It has small overall parameters, which allow it to function even in urban conditions as a transport of housing and communal services or in agriculture. And in the latter all its good qualities are revealed, because it is not afraid of a bad road, has a good height of ground clearance, which is very important. 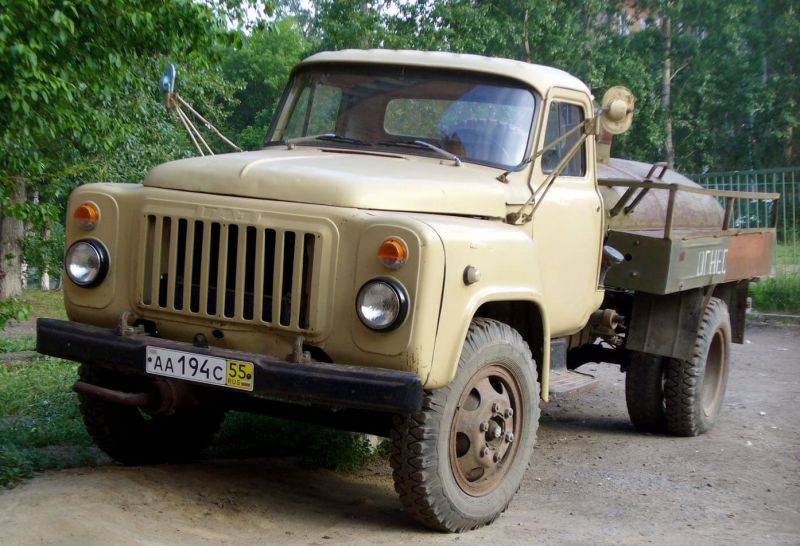 Inside the cabin there are not ideal conditions, but we should not forget in what years the truck was built and with what purpose – the country was built, and it was important to raise the level of agriculture. GAZ-52 will work perfectly, as it is being repaired without any difficulties, simple mechanisms are everywhere, and parts and spare parts can be found in almost any car market. 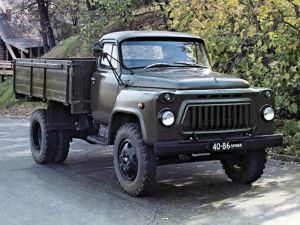 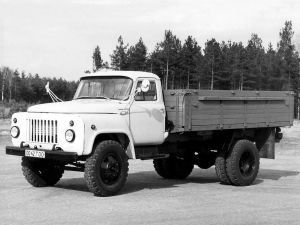 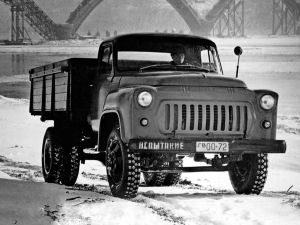 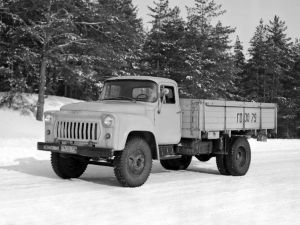 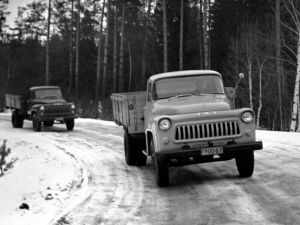 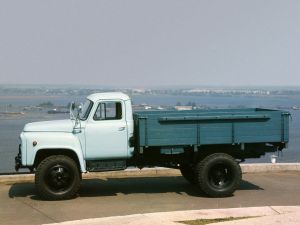 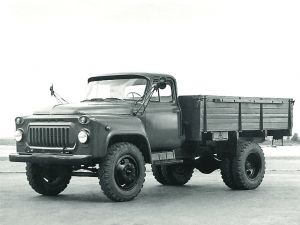 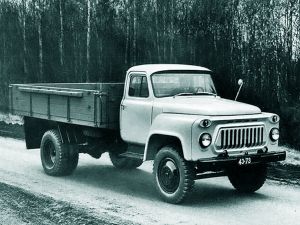 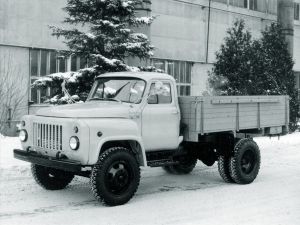