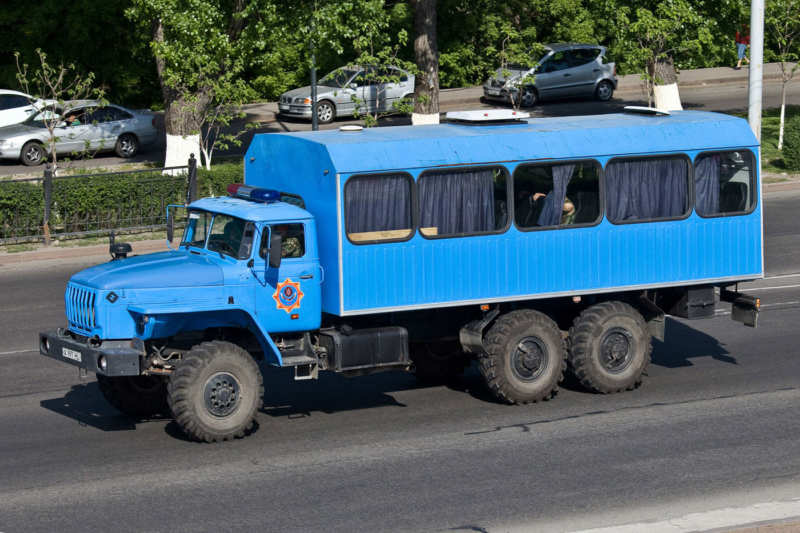 The Ural-3255 is an off-road vehicle of the Ural Company in a specialized modification – a shift bus. The Ural Automobile Plant, which is part of GAZ Group, is being created. The model debuted at the 2007 InterAuto exhibition and was recognized as the best specialized vehicle of the exhibition. The passenger car, which became the winner, was not a prototype or a conceptual version. It was launched for serial production, which began in 2008. Four-wheel drive trucks from the Miass plant are known to many people, but few people have heard of the company’s buses. The whole model range is Ural.

Initially, what is striking when viewing the machine is the presence of an elongated hood, which suggests that underneath it is hidden a V-shaped eight-cylinder engine. Earlier models had headlights under the front fenders, but this version has round plastic plugs in these places. The lighting system itself moved downwards – it is built into the bumper. This decision was made to improve safety measures in the dark, because the lower the headlights are located, the less they blind the oncoming motorists. 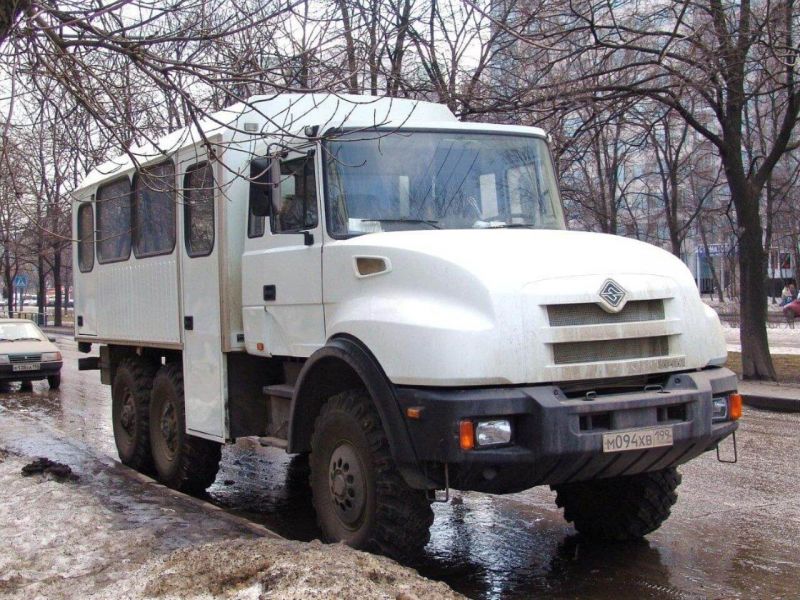 If it’s about the bumper, it’s bigger. It feels as if he is not afraid of any difficulties. The bumper has been provided with comfortable corrugated footplates, which makes the approach to the underside of the bumper easier. The parts installed on the bumper are detachable, bolted. This is not the case for the wings, grille and hood sides, which have begun to be welded, so it will not be as easy to change them as it was earlier when they were also bolted on. 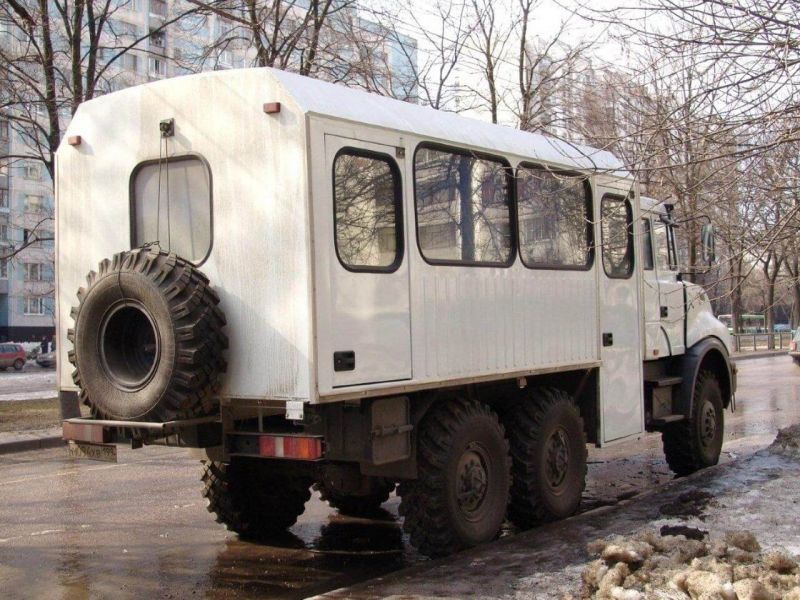 The Ural shift bus has a closed all-metal body van with thermal insulation. Moreover, there is a service and emergency door, a ventilator placed on the roof and double-glazed windows with tinting. The body has an emergency hatch and a ventilation hatch. In general, the van body itself can be equipped according to the personal preferences of those who plan to buy it. It is interesting that at the exhibition itself a comfortable salon of the Ural Bus was used for negotiations between representatives of the company and potential buyers.

Getting into the cockpit itself as well as getting out of it isn’t the easiest thing to do. The height of its floor is almost 1.3 meters from the surface of the road surface. The height of the footrest itself is about 80 cm. But here there is a pleasant feature – the company has not forgotten about the installation of an additional step, which received a flexible design. It was hung on cables. It is clear that it is possible not to break the barrier, however, to put a foot on such shaky “swings” is not the most pleasant thing. But it is necessary to confess, here it is necessary to get used to it.

On the other hand, there are comfortable handles on the cabin wall, which are screwed on the conscience. The salon still looks in Spartan style. Here you can find few changes since the Soviet Union – there is the same dashboard, steering wheel, gearshift lever, pedal unit and seats. In addition to the standard sensors, you can notice the presence of a small round pressure gauge on the dashboard, which shows the pressure in the wheels. Here, without changes, the car Ural 3255 shift bus, as well as all other trucks of the company, has received in equipment system of adjustment of pressure in wheels. 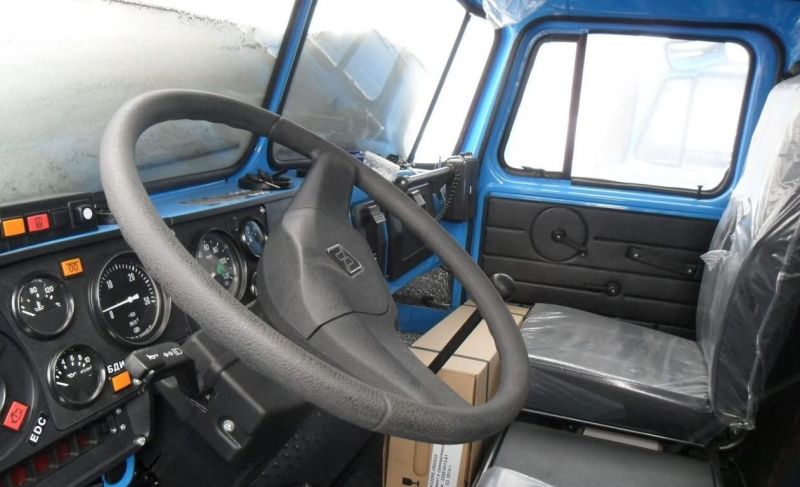 The steering wheel is quite large and has a thin rim. Too bad, but there are no superstructures. But they are in the driver’s seat, even 4. But, if in the longitudinal direction of the chair can be put for a short time and without difficulty (you just need to pull on the small handle), then other settings (the angle of the backrest, tilt and height of the pillow) is not so easy – here you need to unscrew the washers and rotate a sufficiently elastic handle.

Double passenger seat has turned out without any settings, but instead under the chair there is a department of the average sizes under the necessary stock or other things. The front panel has a compact glovebox and a compartment with fuses, handles and handles, which can be held by a passenger sitting at the edge. If you take earlier versions, it was mounted there quite rigidly, there is no such thing, but there are fasteners on rubber cushions. 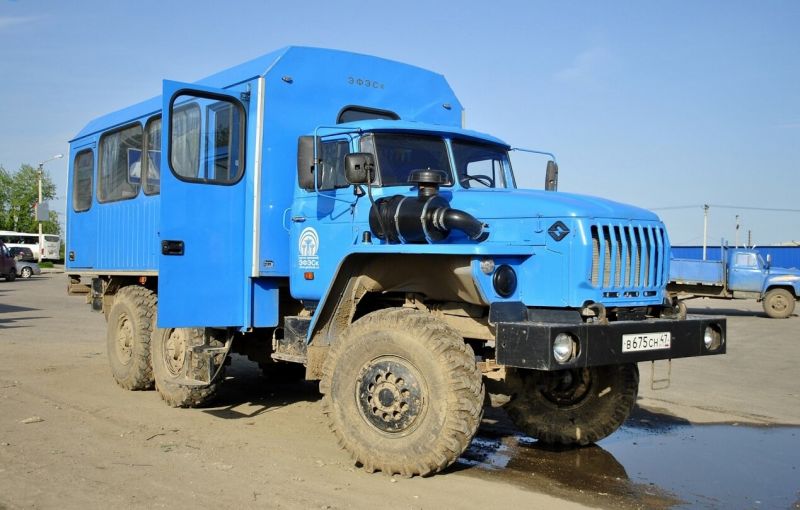 This undoubtedly enhances impact safety, which is very useful, but still, the handle does not have a fixed point of support, which is not good. The front roof rack, on the right side of the roof, has a device for talking to passengers in the van, which is very convenient and practical. The gearshift lever has been installed far away from the driver. Taking into account the fact that the gears are tight, the driver of the Ural 3255 0010 41 must be physically well adjusted.

It is not difficult to choose the necessary gear, even if an inexperienced driver is driving. Despite the use of hydraulic power steering, it is not easy to twist such a large steering wheel with a thin rim. This is very acute when parking or manoeuvring in urban areas is required. Separately, we can say about the pedal knot. For example, the gas pedal turned out to be rather tight, so it is very convenient to have a handle of hand gas. 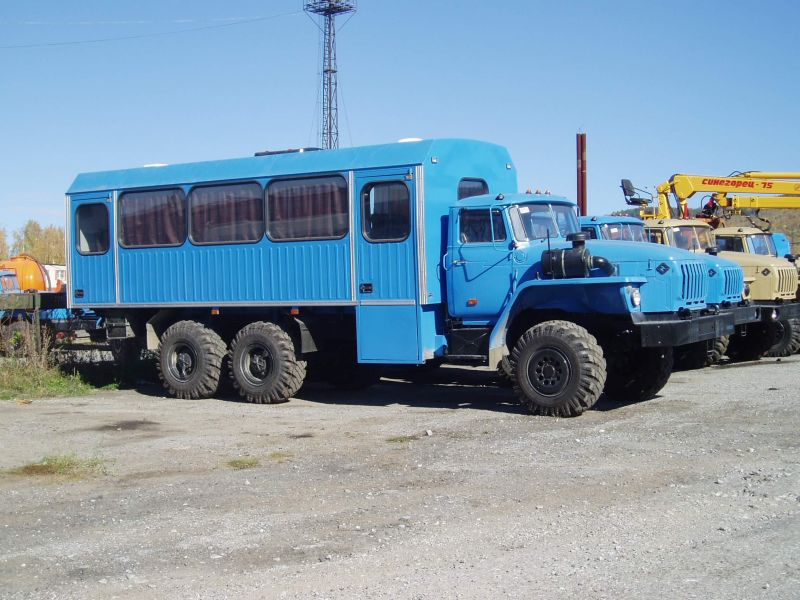 Moreover, the accelerator pedal has a guide edge to the right, which will prevent the foot from slipping off the pedal. You can’t tell about the brake pedal anymore, it is too sensitive, pressed a little, and the Ural 3255 5013 71 at once sharply brakes. Partly, it is due to a strong pneumatic brake booster. The last clutch pedal, the left-most one, needs a strong squeeze, at which the driver is pressed into the back of the chair. In the incomprehensible proximity to the clutch pedal installed a floor brake button engine, which blocks the supply of diesel fuel. If you do not calculate a little, you can accidentally apply the engine brake, which will cause the engine to shut down. This is often the case when it is not necessary at all.

After opening the high front door of the van, the problem immediately becomes – how to get into the van? There is no standard footrest, but if you look closely, you can still find it. Actually, it can be folded back on the entrance steps, which are located behind a closed door and therefore there is no dirt or snow on them. The top of the step, installed in the middle, is removable – under it installed the presence of an autonomous heater salon.

By the way, it is possible to heat the van by means of two more ways. The first way is due to the cooling system of the power unit, from which warm air comes through special pipelines. The second way is a pair of electric radiators, which are placed under the seats of the left row. Behind the door there are handrails on both sides, which start to hang during the load for unknown reasons. 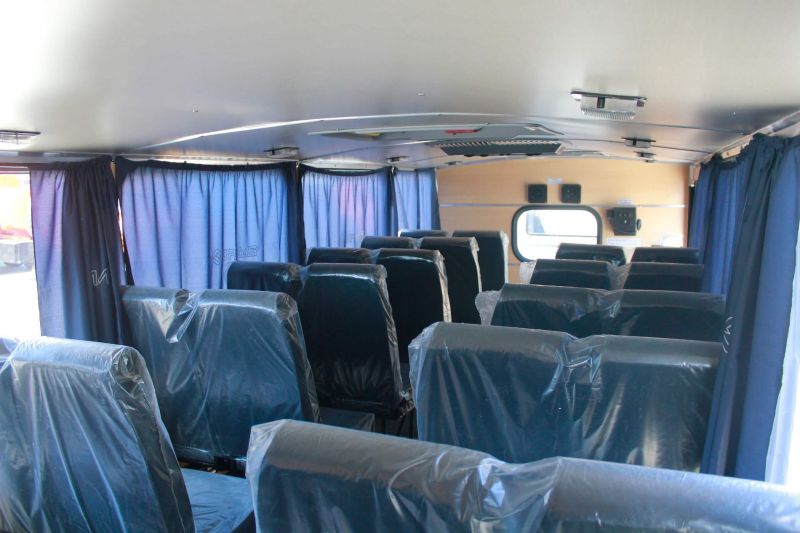 The salon has 28 rather comfortable seats in its arrangement, paired on each side of the aisle. It is noteworthy that the paired seats are staggered to make boarding and disembarkation easier. They were upholstered with a pleasant cloth and the headrests can be adjusted in height. It would not be superfluous to add that all the length of the boards were laid with metal skids, which have holes with a distance of about 20 centimeters.

The seats themselves (only a couple) were designed to be rearranged forward and backward. If there is a need to increase the cargo space, they can be removed at all, which will significantly provide a useful volume for special equipment or luggage. 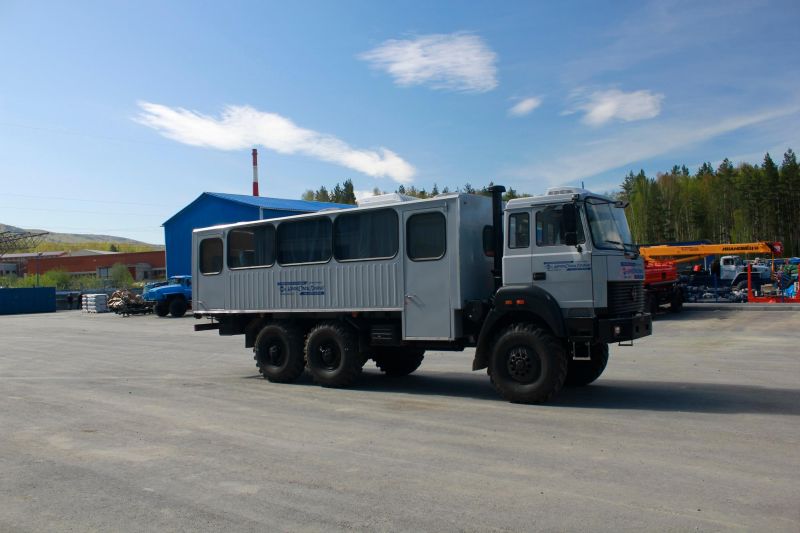 If you raise your head while sitting in a passenger seat, you will notice the presence of 8 lamps, which have individual type switches and a general switch that are placed on the wall of the van, in front. A massive window, through which the driver’s cabin can be seen, was installed on such a wall. A little higher is the intercom system, which allows the driver and the passengers sitting behind to communicate. There is room for a fire extinguisher and small hammers are placed near the windows.

Beneath the long hood hides a V-shaped four-stroke 6-cylinder diesel engine YAMZ-236NE2. The engine has a system of direct injection and meets Euro-3 standards. The engine is equipped with a preheater. The engine volume is 11.15 liters, and the capacity is about 230 horsepower. The cabover variants have an ordinary six with a working volume of 6.65 liters and produce about 240 horses. As for the power, it is quite enough to overcome various hard-to-reach areas.

When driving at a speed of about 40 km/h the engine consumes 30 liters of diesel fuel. If you accelerate up to 60 km/h, the consumption will increase up to 36 liters. However, this is a measure of movement on hard surface. When driving on rough terrain, fuel consumption may increase to 50-60 litres of diesel fuel for every 100 kilometres. 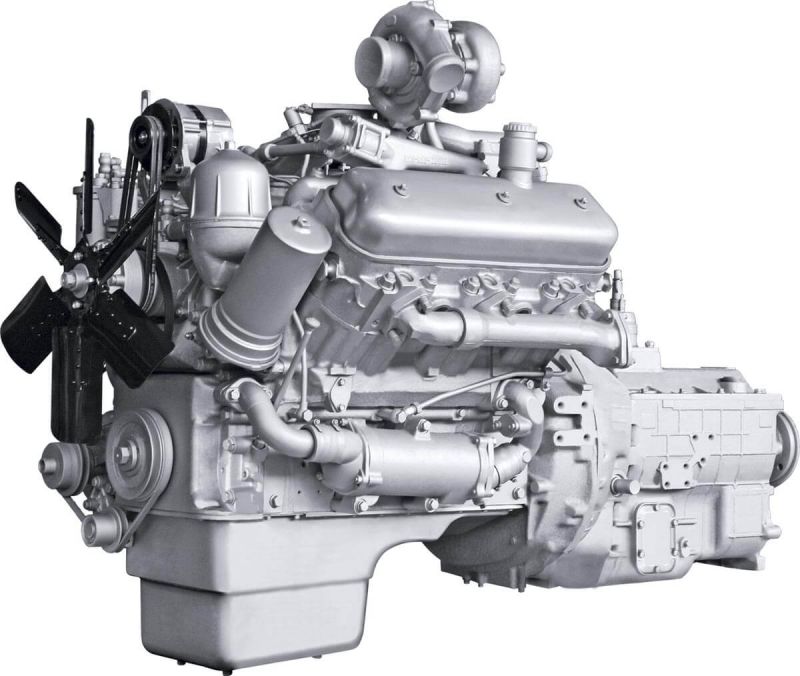 Transmission is represented by a mechanical three-way five-speed YaMZ-236U. The gearbox has synchronizers at the 2nd, 3rd, 4th, 5th speeds. The YaMZ-182 is responsible for the clutch. It is a frictional dry single disc diaphragm with a diaphragm spring of the exhaust type. The transfer case is represented by mechanical two-stage with lockable axial differential.

The suspension has a pair of semi-elliptic springs and hydraulic telescopic shock absorbers. This is the case for the front and the rear suspension is balanced with reactive rods.

Brake system is represented by pneumatically-hydraulically driven drum content. The ABS service is present, which is very pleasing. There is also an additional system of brakes with retarder of motor sample, which is a compression brake and which is installed in the exhaust system of gases. There is also a parking brake system. The latter has a drum content device and is installed on the output shaft in the dispenser.

Rudder control is carried out thanks to the integrated hydraulic double-sided operation. The engine starts without any problems. In terms of noise, it’s not a Rolls-Royse, of course, but it’s not a tractor, and the people in the cab can hear a long rumble. Vibrations are not very big. 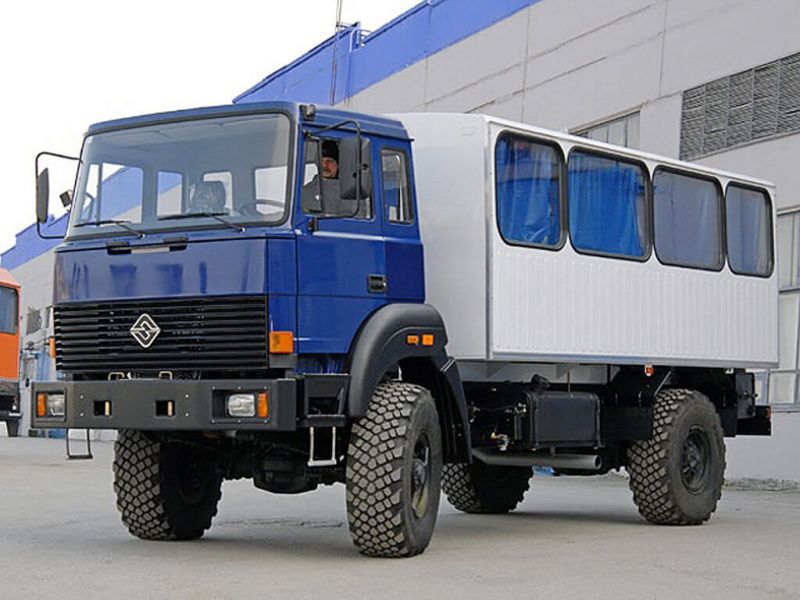 The car is a little better after the upgrade. Although, the cars are still seriously inferior to competitors from Europe. But, the Ural shift bus boasts a spacious van, good heating system, braking system, plenty of useful space, four-wheel drive system, and, perhaps most importantly, its excellent cross-country ability. In fact, these cars are used in the conditions of extreme impassability. Of course, there is still much to be improved, but already now the digging produces the Ural-3255 with a new version of the cabin, and there are models with cabover version and an abundance of improvements. 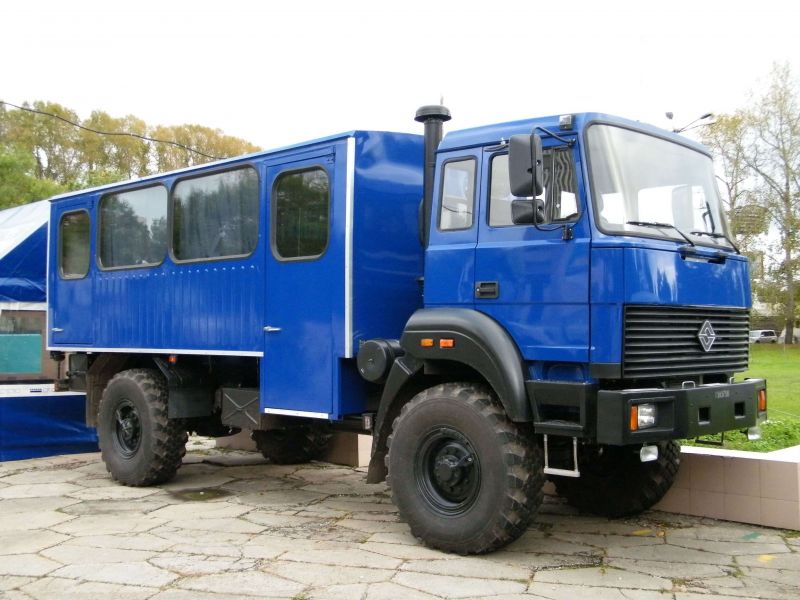 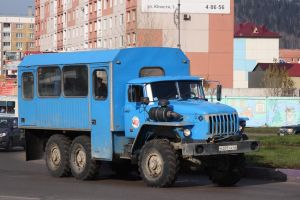 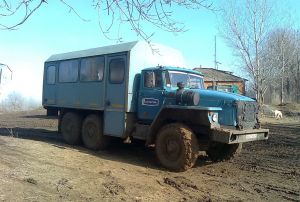 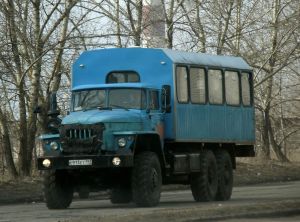 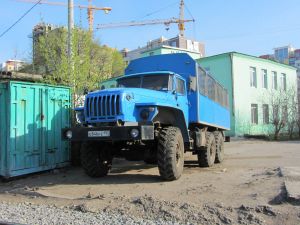 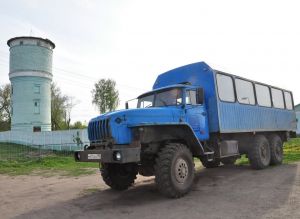 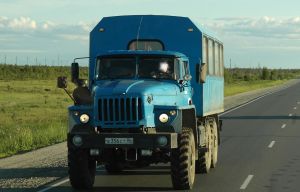 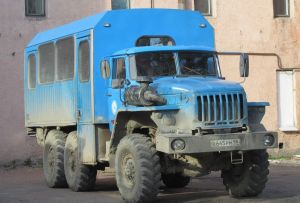 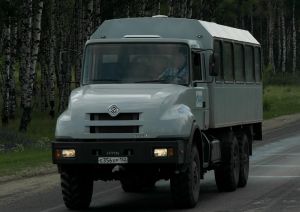