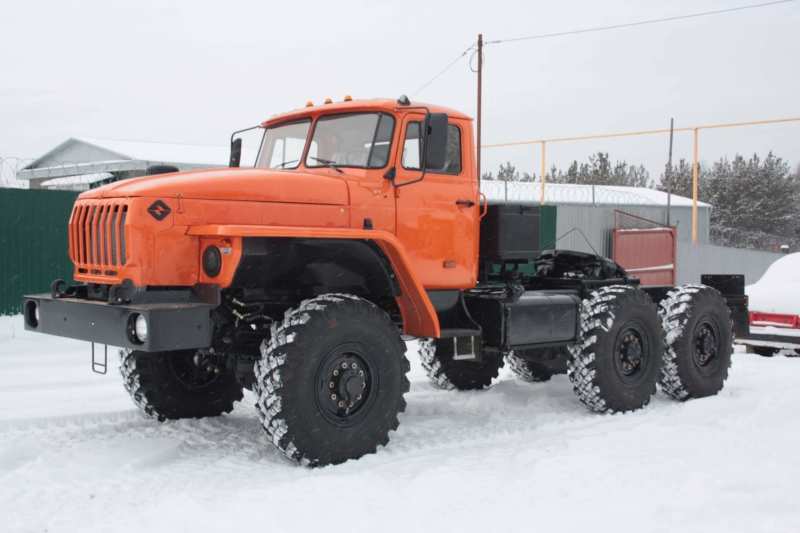 The Ural-44202-0311 is an all-terrain vehicle of the saddle type, which has all-wheel drive and is equipped with a 6×6 wheel system. Such a vehicle can be attributed to a heavy group of vehicles, which were created to transport materials with the help of trailers of any type. The most important features of this truck are excellent cross-country ability and high power of power units.

In the Russian market of trucks with saddles a special niche is given to the off-road all-wheel drive Ural-44202. The vehicle is a legendary heavy truck and is produced under the Ural-4320 model. It has gone through all the bad roads of the Russian Federation along with oilmen, gas workers and the military, and was able to get a good improvement. The whole model range is Ural.

Initially, unusual conditions, for which the truck was produced, did not ask for improvement of such a respected car. They always spoke about it only in the positive sphere. However, despite this, the company in Miass still decided to change the next page of history. March 2011 allowed a new participant to appear in its line of bonneted trucks – Ural-44202-59.

Based on this, the line of trucks has 6 advanced trucks for cargo purposes. The truck tractor is mainly used for trains weighing less than 28,300 kg. The Urals 44202 has been equipped with a 50th type kingpin, which meets the requirements set by GOST (12017-81). Connecting dimensions of the coupling for this type of vehicle were set by GOST (12105-84) and have a designated degree of traction not more than 8.5 ton-force (83.3 kN). 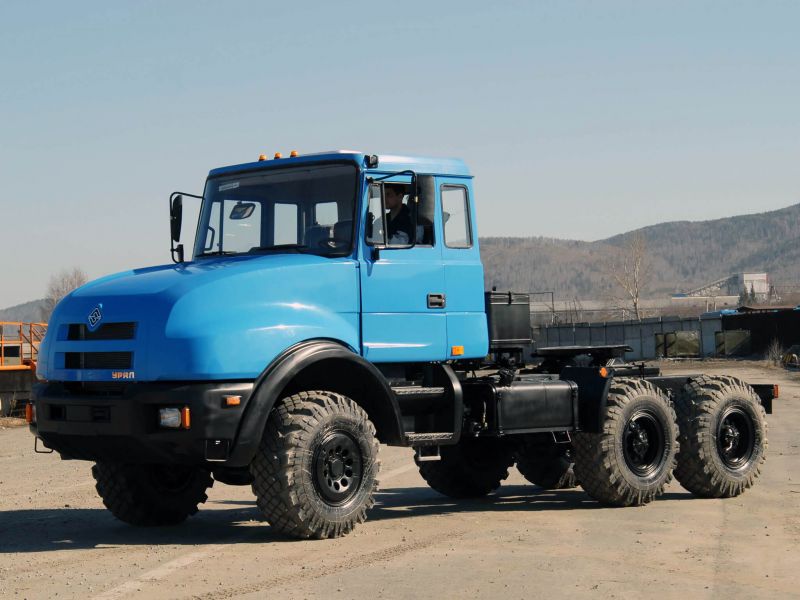 The trucks of the Ural-44202-59 model line were able to get a new, as it is often called – the Jivean cabin with the index “P”. The line for production of these cabins was still received from the early 90’s, which worked only on the structure of cabover trucks. So it came to the trucks with long hoods. The appearance of the Ural Mountains is distinguished by the hood, wings and radiator lining connected together. The whole construction was carried out with the use of plastic, and it was successfully attached to the cabin.

The front bumper was also covered with plastic. It is quite clear that the “nose” structure of the new Urals 44202-59 does not call it the most modern, but if you compare it with the previous model, the latest one has become much more progressive. In addition, off-road spaces need more functionality than beauty and grace. Also, in recent years, cabover trucks of the newest truck tractor Ural 44202-3511-82MA11 have been produced. Among them is the Ural M shown above. The truck received various improvements, which touched both the appearance and interior, making the driver’s work more pleasant and comfortable. 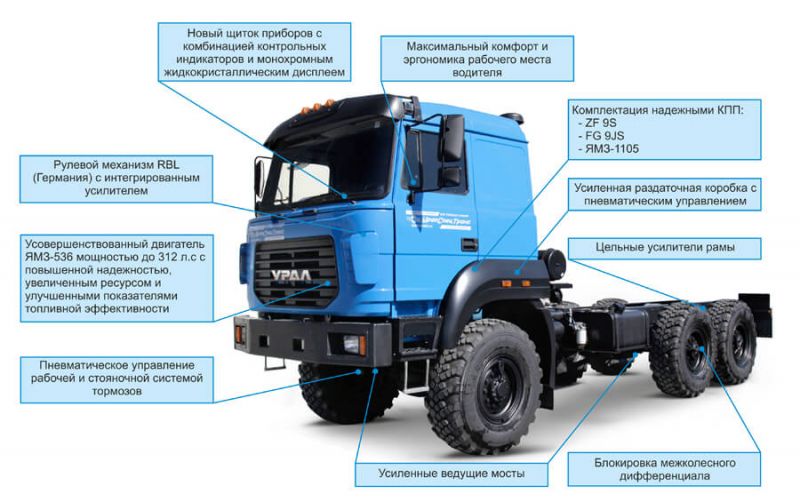 The designers were able to make the cabin tall and spacious. The driver’s comfort is ensured by the presence of a sprung driver’s seat and a steering column with a new steering wheel that can be adjusted in the angle of inclination. The dashboard together with the previous arrow sensors looks more representative. The middle part of the torpedo is equipped with a massive box of heating system, which does not worsen the interior decoration when mentioning the northern parts of the country, where these trucks work in principle.

Due to the fact that the dispenser has acquired a pneumatic drive and the previous old lever was replaced by a switch located on the dashboard, the control of transfer case stages and blocking of the inter-axis differential is much more convenient. The driver’s seat is mounted quite high, and sitting on it, opens a good visibility through the front glass, which does not have a vertical bar, usually placed in the middle. An improved system of rear-view mirrors is also available. Both thermal and noise insulation have been well done. 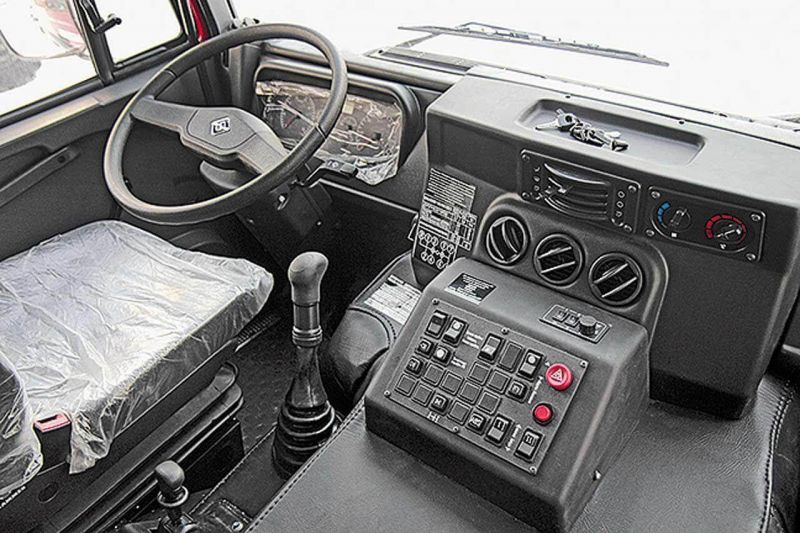 Although, to confess, inside there are still visible wires with tubes, which can not be hidden yet, however, it does not affect the functionality and efficiency of this truck Ural-44202. Mark 44202-0511 and 41st and 45th equipment comes with a cab of an elongated new type, where there is a sleeping place. Inside the interior is furnished with specialized panels, which provide ultimate protection against various noises, help to maintain the best climatic position inside the cabin at work. Due to the large number of glazing and the proven system of installation of rear-view mirrors, it is possible to make a complete visualization of control over the road surface and the movement of other vehicles.

The mirrors can be divided into two groups: side visibility and wide-angle mirrors. There are also two separate seats for passengers sitting next to each other on which the seatbelts installed in the cab can be used. Thanks to the presence of specialized head restraints and armrests, including the system of suspension of seats, the ultimate comfort when driving in the Urals-44202 is provided. Due to the fact that a longer cabin was installed, the wheelbase of the previous truck was increased by 275 mm. This made it possible to save the possibility of installing all the superstructures, with which the previous cars were produced, and to use the same semi-trailers of the model 9370 and 935.

The truck tractor Ural 44202 is equipped with a four-stroke six-cylinder diesel engine YAMZ-236ÍÅ2-3 with direct injection. The model with a V-shaped engine meets Euro-3 standards and is equipped with a preheater. It also has a turbocharger, which as a result produces about 230 forces. The engine has an intermediate cooling. The ignition spark is obtained by means of a compression process, and the working volume can reach 11.5 liters of fuel. By all standards, this power unit is suitable and meets all Euro-2 standards, which indicates that the company is responsible for ensuring environmental friendliness.

Fuel consumption has been reduced through the implementation of engine system improvements. The truck tractor Ural 44202 is designed for operation with semi-trailers on any road and in certain areas of the terrain at a temperature of -45 to +40 degrees Celsius. Power units are synchronized with the YaMZ-236M mechanical gearbox. It is represented by a three-way five-stage with synchronizers at the 2nd, 3rd, 4th and 5th speeds. The dispenser is represented by a mechanical two-stage differential, where the inter-axis differential is blocked. Cardan gear is open, has 4 shafts and joints on needle bearings. Leading axles have a through-feed type with an upper main speed arrangement. Clutch YAMZ-182 is frictional dry single disc diaphragm with a diaphragm spring of the exhaust content. 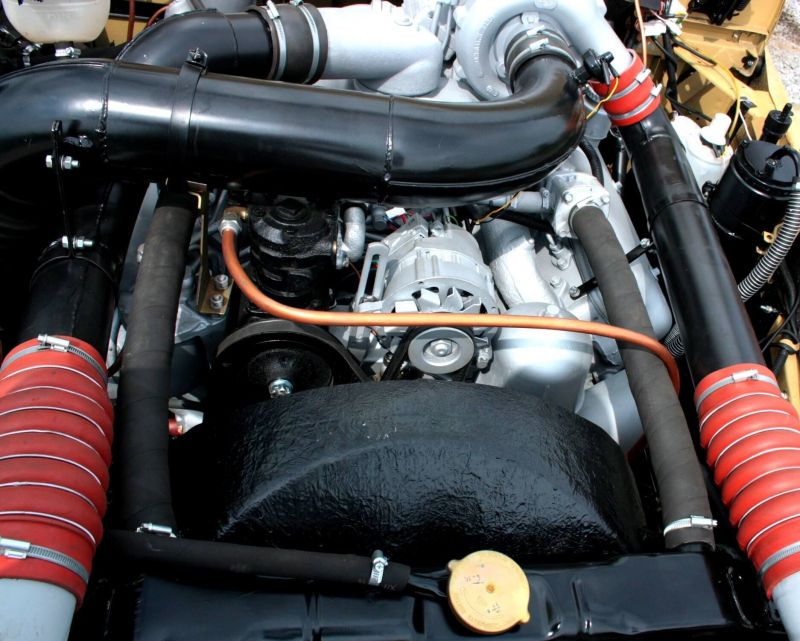 The front suspension has a pair of semi-elliptic springs and hydraulic and telescopic type shock absorbers. Rear-mounted – represented by a balancer with reactive rods. Steering is represented by the presence of an integrated hydraulic power steering wheel with two-way action. Brake system has a drum type, and also has a pneumatic and hydraulic drive. There is also an auxiliary braking system. For example, there is a retarder of the engine type. It is a compression brake and is installed in the exhaust system. There is also a parking brake system, which is represented by a drum brake mechanism and is installed on the output shaft of the dispenser.

Many models of the Ural-44202, including 3511, 60, 82 and 80 still drive on wide Russian soil. The cost of a truck varies from 1,900,000 rubles to 2,400,000 rubles. In addition, they are mainly used by large industrial enterprises. However, if there is such a need as transportation of oversized cargoes to distant destinations, it is possible to rent transport companies, which will be able to provide the car together with the service personnel. There are also tractors of a new type (cabover), the price of which starts with a mark of 3 052 000 rubles. 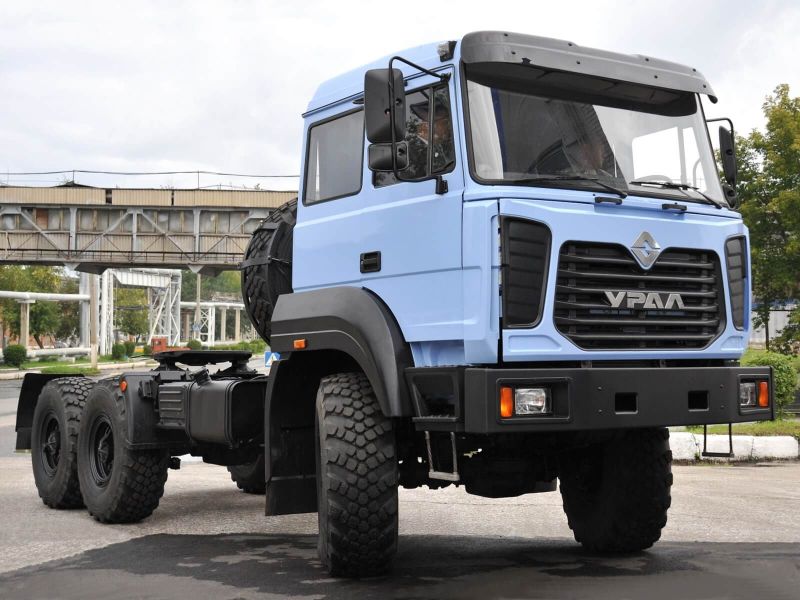 It is clear that Russian trucks are still very far from European competitors, but still, when the question is about the extreme north or complete lack of roads, everyone remembers Russian trucks. And the truck tractor Ural-44202 is not an exception. The truck is very well exploited, because almost all the oversized cargoes are Russian off-road trucks that can carry. The power unit has sufficient power and is more economical if we compare it with the previous models.

Appearance will not be especially noticeable, as it is almost standard, but inside there have been introduced some improvements that help the driver feel more free and comfortable, driving a long road. The all-wheel drive system, together with high ground clearance and powerful large wheels, helps to overcome the most impregnable road sections. 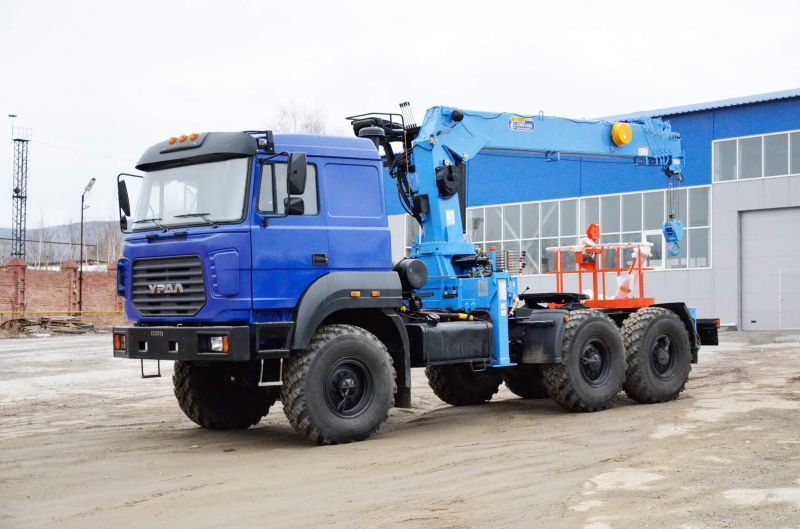 Engines can comply with Euro 2 environmental standards (Euro 3 – more recent models), which means that the company seeks to be competitive and cares about the environmental situation. Later versions have been further improved and have a cabover structure. They are more similar to European models, which have also been able to maintain their technological characteristics, while possessing improved engines, and are also reliable in off-road conditions. Today, the truck tractor Ural-44202 can be found quite often, especially at enterprises. They are indispensable where simple trucks can not pass. This is the hallmark of the Ural Company’s vehicles. 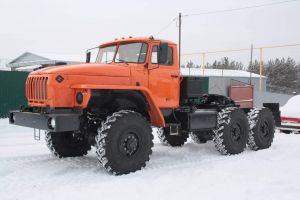 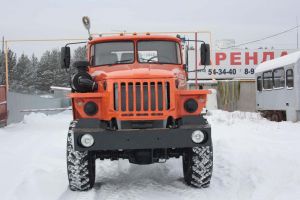 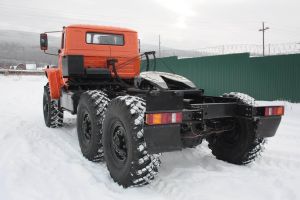 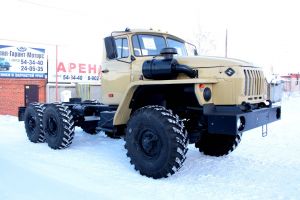 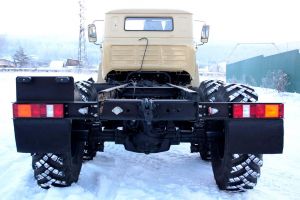 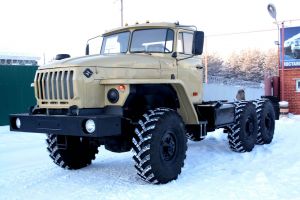 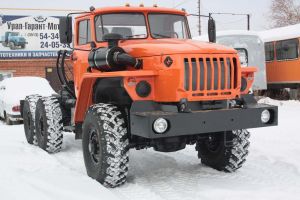 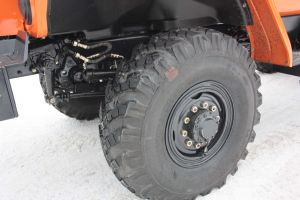 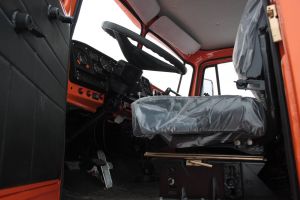