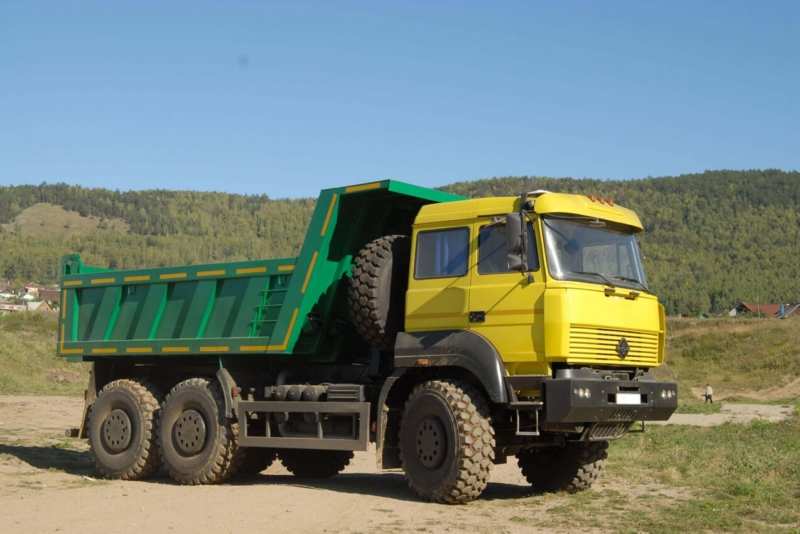 Despite the long history of the Miass Automobile Plant, which began its existence back in 1941, the plant continues to operate and even produces new machines. Just about them will be discussed in this article – Ural 6370, 2010 of production. It presents new heavy-duty vehicles with increased operational data. The Ural 6370 dump truck has a four-wheel drive system, which makes it more applicable in the Russian Federation.

In general, trucks with all-wheel drive system are quite popular at various construction projects, quarries, and are also well suited for public utilities and rescue services. Cars of the Urals have increased cross-country ability on road sections where there is no direct road for driving and it is difficult to travel for simple cars. In this article it is possible to learn about appearance, power units, chassis Ural 6370. The whole model range is Ural.

Serial production of machines started in 2010. The car has a good resource – about 600,000 kilometers. The dump truck is produced in some variations, among which you can find the presence of fuel tanker, dump truck with rear loading, road combined vehicle, chassis with an extended platform for special equipment, truck tractor to transport various types of equipment, trains and pipe trucks.

A novelty in the production of trucks was a new bumper, which provided an increased increase in the front overhang, which had a beveled cross-section. It is an all-metal solid construction and, compared to other bumpers, is not very prone to damage when driving off-road. The bumper has anti-slip pads, and with the help of a folding footrest it will be possible to climb on it to perform maintenance of the cabin. There is also a presence of a lens shockproof optics, which has high technical properties. Lighting is a compact modular lighting company Hella, which is simply perfectly recommended in the operation.

The Ural-6370 boasts a unique two-knee rear wheel holder with hydraulic drive. All this is located behind the driver’s cab. Thanks to the mudguards it is possible to protect the drive pump. The dump truck base has a rear unloading. The design staff of the plant has also provided for it a tailgate with heated exhaust gas. The volume of the platform reaches 16 cubic meters, the lifting angle is 50 degrees. 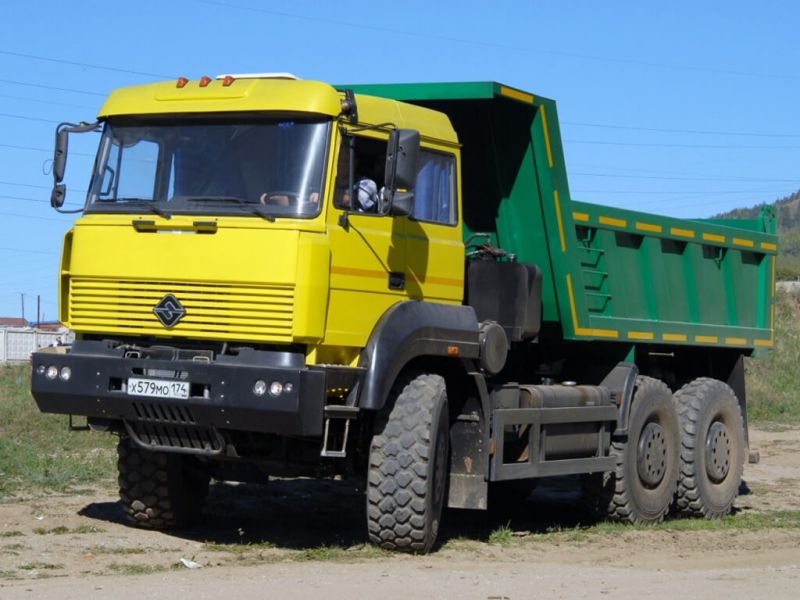 The design staff of the plant used cabover cabin, which is well-proven. By the way, the cabin is from IVECO company. The cabin has a spring suspension, which has hydraulic shock absorbers that provide the driver with comfort in a double cabin. The cabin itself turned out to be quite comfortable and the drivers’ feedback confirms it. However, for the best thermal insulation of the cabin it is better to get rid of the rear window, which cardinally takes away the heat of the cabin near the bed.

The designers of the truck have provided for the installation of an electric drive to tilt the cab, which was present on the experimental trucks. The standard machines can only boast of a hydraulic drive system for tilting the cab. The standard models were equipped with a hydraulic cabin tilt actuator, however, the designers provided for the possibility of installing an electric cabin tilt actuator. 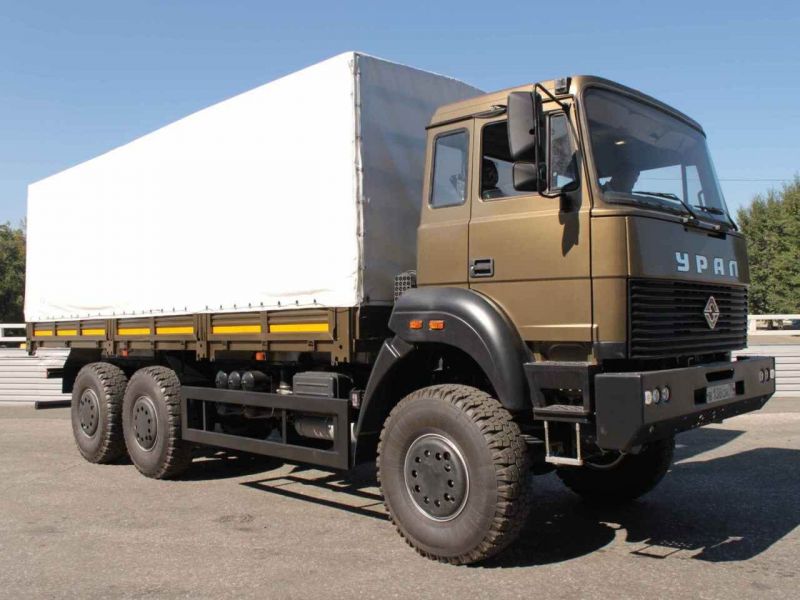 The driver’s seat has an air suspension and a Pilot seat. Sleeping space is available for the 2nd chauffeur, which is quite convenient and comfortable when driving over long distances. The steering column in the car Ural-6370 is adjusted in height and inclination. Steering is carried out with the help of hydraulic power steering. It is also possible to control the rear view mirrors by means of electric adjustments, which makes their adjustment very easy. In addition, they are also equipped with an electric heating option. 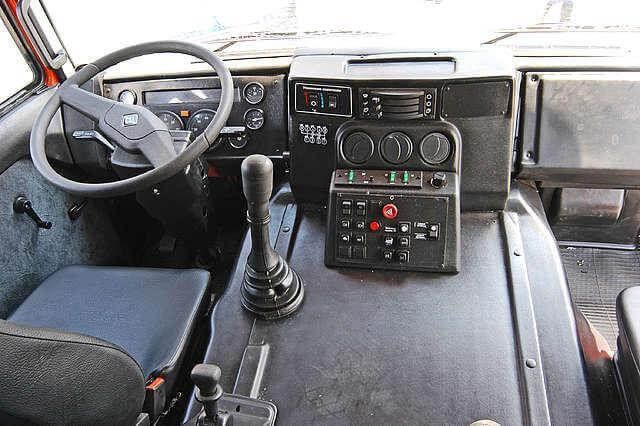 If we compare the car with the older cars of the company, where the Iveco cabin is also located, the new version has changed the upholstery of the engine department, which became more productive in operation. The instrument panel has ceased to have a large overlay, from now on there is a different overlay. There are also ABS switches, differential locks, independent air heater, dispenser switches, and there is also a convenient system for setting the air pressure in the wheels. The company was able to improve the interior and parameters of the driver’s seat, which includes improvements in visibility and noise isolation.

Diesel six-cylinder YaMZ-650 is used as a power unit, which is assembled at the enterprise of Yaroslavl city since 2007. It has been exhibited many times at different exhibitions as a separate exhibit. Taking into account a lot of design features, you understand that such an engine is not so distracted from the standard modification, but it has been improved, and now it meets the environmental standard Euro-4.

This was achieved by setting up a fuel system and an electronic control unit. It produces this power unit of about 412 horsepower. The engine is represented by an 11.12-liter 4-stroke engine with direct fuel injection, in-line arrangement of cylinders, turbine and liquid cooling. The crankcase, together with the engine, was protected by a steel tray at the bottom. 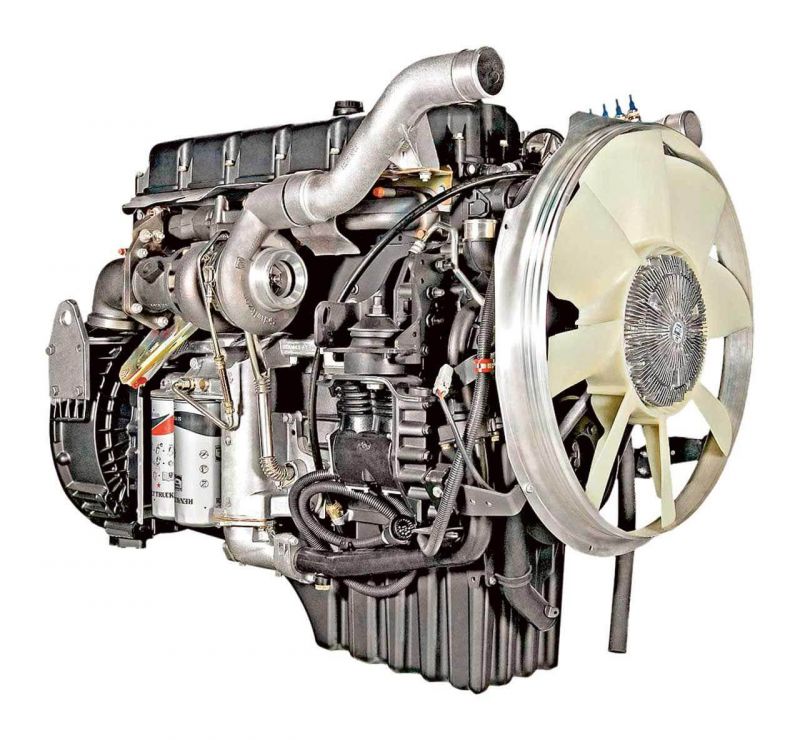 The Russian truck has perfectly recommended its own driving characteristics on the road with a considerable amount of torque. By means of horizontal arrangement of the filter in a two-stage air purification system, it is much easier to replace it. Taking into account the fact that the truck is used in areas with a cold climate, much emphasis was placed on the installation of a liquid preheater “warm start”. It provides pre-start heating for long parking lots. At a time when the temperature is very low, the heater automatically knows how to function together with the motor at the same time. 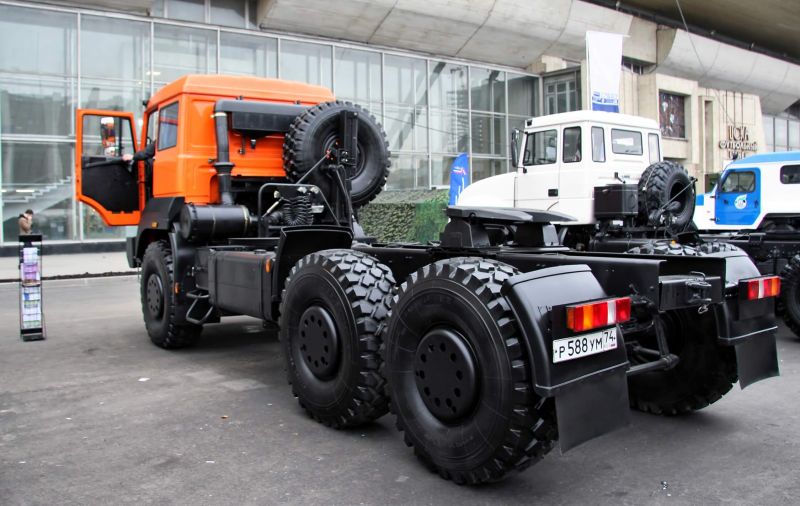 Transmission is assembled from components that come from Europe. The gearbox possesses presence of diaphragmal coupling with a hydraulic drive, and also the pneumatic amplifier. Its model is ZF 16S2220TD. This transmission is a 16-speed manual transmission and one of the best in its class for such dump trucks. Leading axles were produced in Hungary. The rear axle design has been changed, which made it possible to significantly increase the tonnage of the dump truck. The main spaced gear has a blocking of interaxle and interwheel differentials.

The Ural-6370 has an original frame with spars made of alloy steel, which has a variable height. The suspension has front and rear side stability stabilizers, and the rear is also balanced. The front suspension is dependent and has a pair of springs with hydraulic shock absorbers. 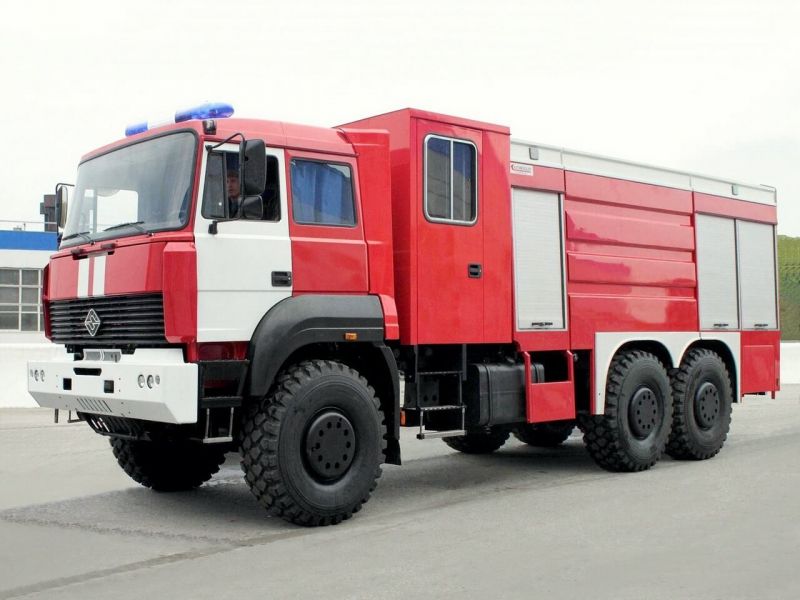 It is presented in the Urals 6370 with a hydraulic power steering system, and the steering column itself knows how to adjust the height and inclination.

Brake system of the car has a three-circuit pneumatic drive, auto-locking service and air preparation unit. The fuel tank is designed for 500 litres. The truck has a 6×6 wheel arrangement, the maximum payload is 19 tons, and the dump truck weighs about 14,650 kg. Maximum speed is 80 km/h.

The Ural-6370 truck can be produced for different versions. For example, there is a presence on the chassis of the Ural 6370 truck tractor, pipe carrier, dump truck and chassis with an extended platform for special settings. The dump truck version can be used for transportation of loose construction, industrial bulk and bulk cargoes, for agriculture and in general for everything that can be tilted with the help of the bodywork. The machine can be used on all types of road surfaces and in all types of terrain.

Moreover, the Russian truck can be used in the mining of minerals in quarries. The option of self-unloading significantly reduces the time for unloading the machine, which serves as a clear trump card in front of other special vehicles with a fixed platform. Possessing such excellent characteristics, the special equipment was able to occupy an honorable niche in the current market of trucks. 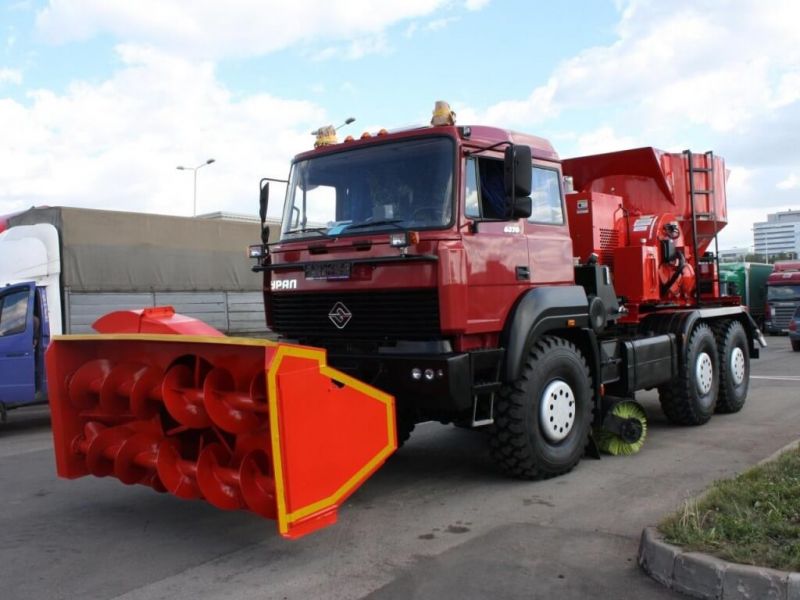 One of the most popular trucks of the 6370 division, or more precisely, the truck UST Ural 63701 on the official website of the company costs from 5715000 rubles. Service Yandex. Market will allow you to find various configurations of the machine, the price of which will vary from 2000000 to 5000000 rubles. 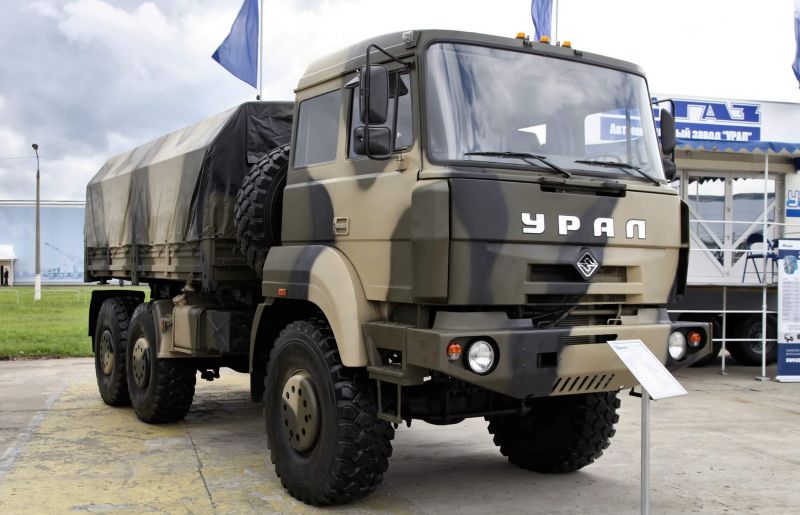 After a more detailed examination of the new truck Ural 6370 there are mixed feelings. On the one hand, the truck has just entered production and should be clearly better head over heels than its predecessors. However, on the other hand, in reality everything is not quite so. There are a lot of defects. There are a lot of complaints about everything that was not done in Miass. This also applies to external and internal defects. It is a pity that the heating system has been pumped up, as often such cars are used in areas where the temperature is quite low. I am glad that it was possible to refresh the car at least a little bit, there are new lamps, improved power unit, gearbox, starting heater and a sleeping place.

By the way, the last one is not very warm, which is why there are problems in winter. We have increased the payload of the truck, installed the possibility of heating the rear part of the body with exhaust gases, which will be, again, very useful during the negative weather. What else keeps the dump truck on the market is its relatively low cost and running characteristics. It is obvious that the company strives to be competitive and constantly want to develop. 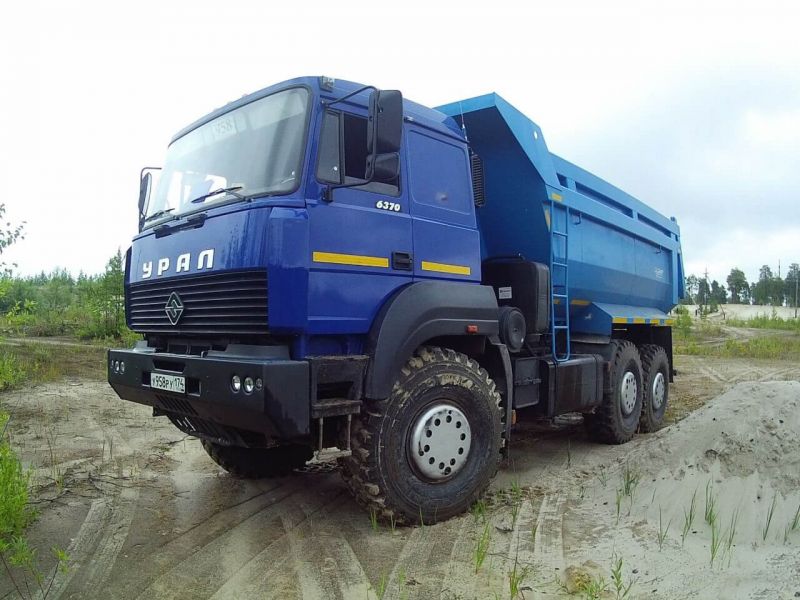 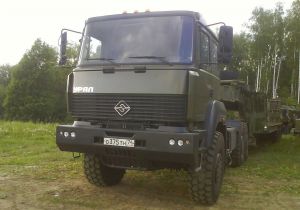 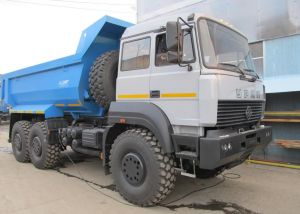 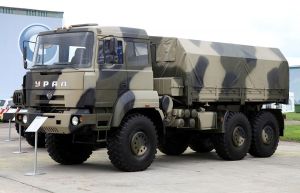 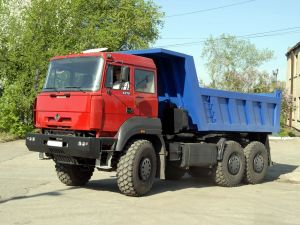 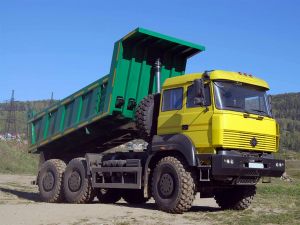 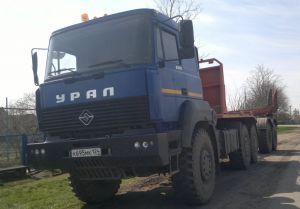 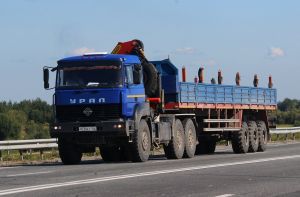 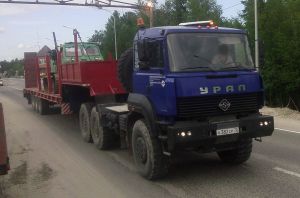 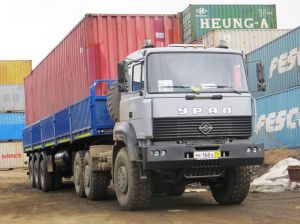