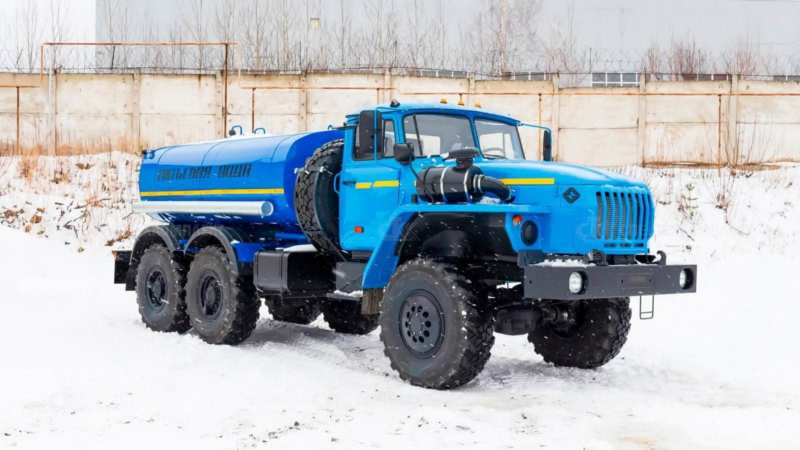 The trucks called the Urals are machines with more than 300 modifications for a large number of branches of industry and agriculture. The platform of this vehicle has a high level of cross-country ability and is used for 180 types of special vehicles. The automobile enterprise in Miass serves as one of the main factories of trucks on the domestic market.

There is a large number of well-known brands, but one of the most famous is Ural-5557. Such a machine has been produced since 1984, but until today it continues to be used for various needs. The truck is adapted to different areas. In this article you can see a photo of the car Ural 5557, its specifications, description. The whole model range is Ural.

When it was far back in 1962, the UralZiS company changed its name and now it was called the Ural Automobile Plant. During the first three years, the plant’s employees were able to improve production and stopped creating old cars with their replacement by a completely different truck Ural-375.

It will not be superfluous to notice that during that period of restructuring the production rates did not decrease, which can be said about the volume of production of machines. The company was awarded the Order of the Red Banner of Labor for its success, which was a very authoritative state award in those years. Vehicles of the new model very quickly managed to find demand abroad, where the debut consumers were Mongolia and even the GDR. 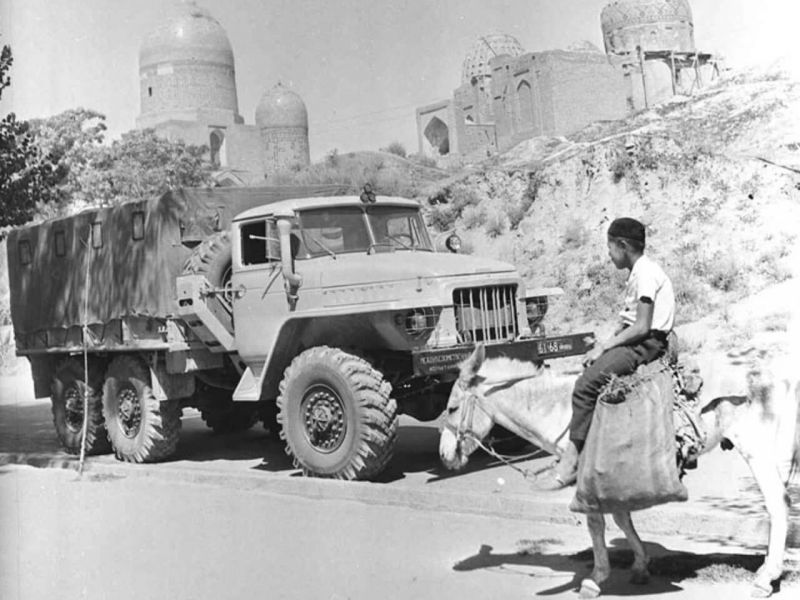 It was in the latter that the truck was even able to win the gold medal at the international trade fair in Leipzig. Years passed, and already 1970 allowed the company to bring in a couple of new vehicles: Ural-375Yu and Ural-375K for the tropics and northern regions. After their introduction into serial production, the company received a diploma of the 1st degree from the Commander-in-Chief of the All-Union Exhibition and National Economy Department of the Union of Soviet Socialist Republics.

After 6 years, the plant was able to unite to create trucks. In addition to the advanced ones, its list included 3 massive plants that were located in the Urals. A little later the production of the new Ural-4320 started, which became the founder of the model list with power units operating on the diesel engine. After a short period of time it included a truck Ural 5557. 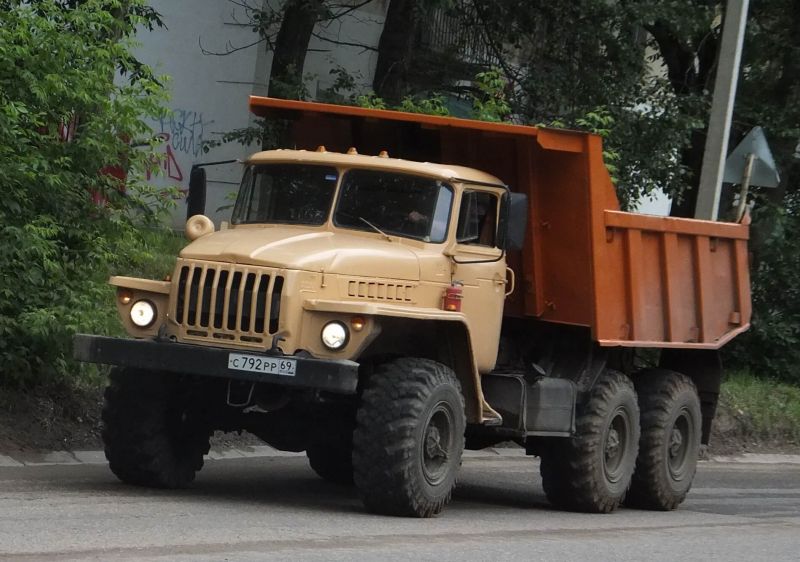 The debut model of the diesel list was presented in some configurations of tractors, which are capable of towing semitrailers weighing from 7 to 18.5 tons. To date, the number of models of this vehicle is much larger, which includes the presence of civilian and military trucks. The vehicle is also often used as a truck crane, fire-fighting cisterns, fire-fighting service and dump truck.

As soon as the eighties came, the specialists developed the machine, the main direction of which was the application in agriculture. At that time, the production of this truck started, but with small volumes. The truck was produced together with the four-wheel drive system and the YaMZ-236NE2 powertrain, which had a power of 230 horsepower. The chassis had a standard three-seater cab, where there was no sleeping space. From the very beginning, the chassis had a dump platform with a floor space of 10.5 square meters and a maximum capacity of 17.5 cubic meters. After that, special equipment was installed. 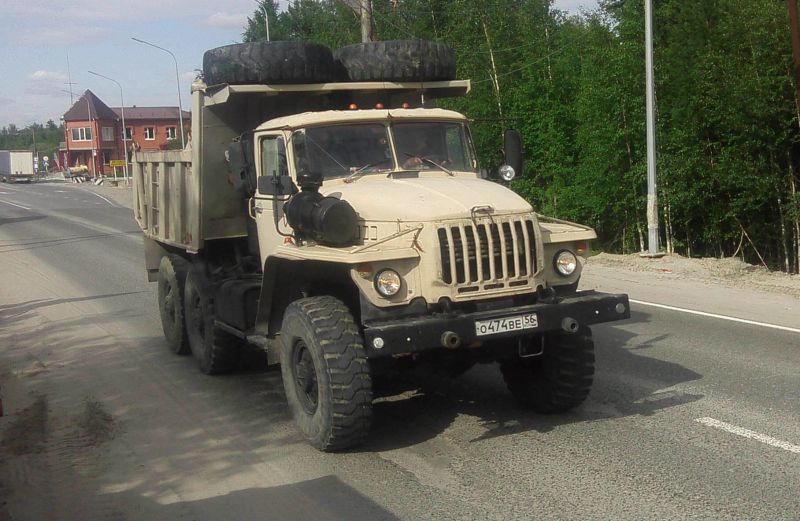 The platform had an increased cross-country ability and allowed operation on any type of road sections, or where there was no road at all. In order to meet these requirements, the new system of centralized regulation of air pressure in the wheels was introduced, and the tires have a wide profile and can be used at different pressures in the wheels. The Ural can carry up to 7 tons of weight, as well as tow a trailer weighing up to 11,500 kilograms.

All this can be done with a maximum speed of 75 km/h. The standard modification has a dump truck made of metal, which is attached to the subframe by means of quick couplings. Hydraulic drive of the lift allowed turning the base, depending on what the need – left or right at an angle of 45 degrees. In addition, on the base there were provided extension walls, to open and close what can be done with the help of hydraulic cylinders. 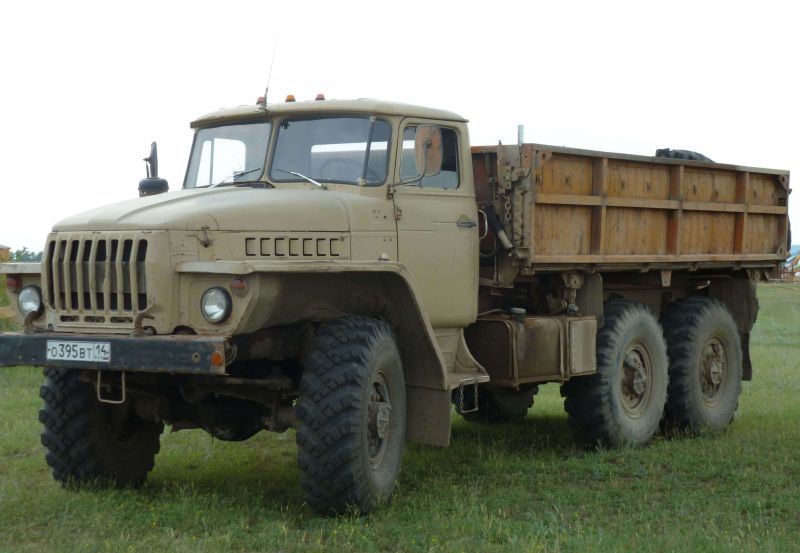 The dump truck base had a new constructive solution for those times. Side walls could be tilted back automatically during the lifting of the base, which allowed not to fall under the wheels during shipment. The sides were closed with the help of hydraulic cylinders, which could be controlled by a driver from the cab. A visor was also included in the equipment of the base. The presence of superimposed sides spoke about the absolute operation of the Ural-5557 tonnage. It was possible, if necessary, to transport agricultural products with a small specific mass. With the help of the bounce visor the losses of the transported goods during shipment were reduced.

In order to increase the cross-country ability together with the clearance of 36 centimeters and all-wheel drive, the wheels were installed, which had a low and wide profile. As mentioned above, the Urals was able to monitor tyre pressure from 1 to 3.5 atmospheres. It is interesting that the car is able to cope not only with impassability, snow, ice, mud and swamps, but also to pass through water jams, the depth of which is up to 0.7 meters. The maximum angle of ascent on rough terrain is 40 degrees.

How the platform is controlled

The dump platform of the machine and trailer is a very good helper, however, it is not just a matter of itself, but a result of the operation of complex hydraulic systems. There is a three-stage telescopic cylinder, a hydraulic cylinder that lifts the sides, a tank that can hold 46 liters of oil, a distributor, which controls the lifting platform. Hydraulic outlets are available to operate the trailer.

The engine is the original advanced KAMAZ-710.10, where there is a PZD-30A heater. Its heat output was about 26,000 kcal/h. Later six-cylinder diesel engines YaMZ-236M2 appeared. They seemed to be four-stroke turbocharged V-shaped engines. The volume was 11.15 liters. All this allowed him to produce 240 horses. 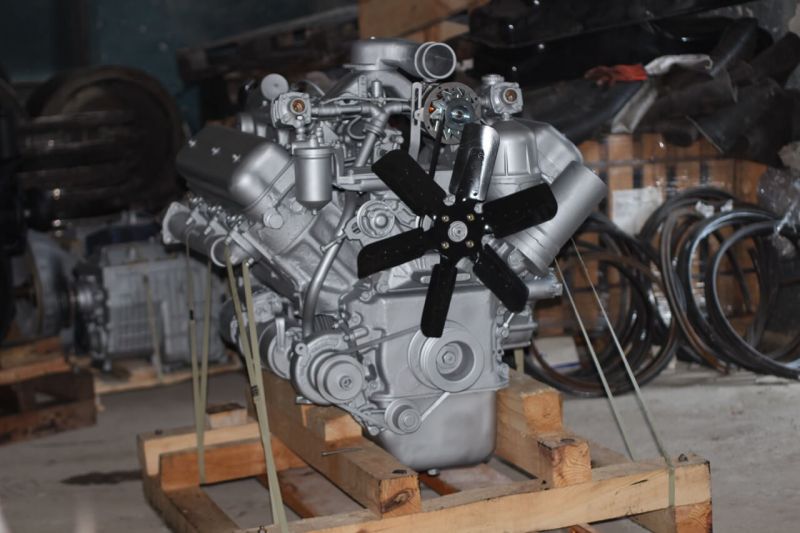 Fuel mechanism on the machines of the Urals is used for cleaning and uninterrupted operation, and supply of diesel fuel to the internal combustion engine cylinders. Especially for this purpose, the pipeline network, coarse and fine filters, as well as fuel injection pumps, etc. are installed. Among the peculiarities of the Urals there is the fact that it does not have a system of heating of solar oil from the circulating in the system of cooling of the fuel oil. Solar fuel can be filled into the tank, the volume of which is equal to 200 liters. One of the important technical aspects of the engine operation is its consumption per 100 km.

In other situations, the condition of the truck and its surroundings will be fully compliant with the conditions of the next fuel standard:

The Ural-5557 was equipped with a mechanical gearbox YaMZ-236U. The gearbox had five gears, had a 6×6 group all-wheel drive system. Transmission number (total) of the main transmission of the driving axles was 8.05. The clutch was double disc. The axle design had a two-stage transfer gearbox with a uniform double main gear. 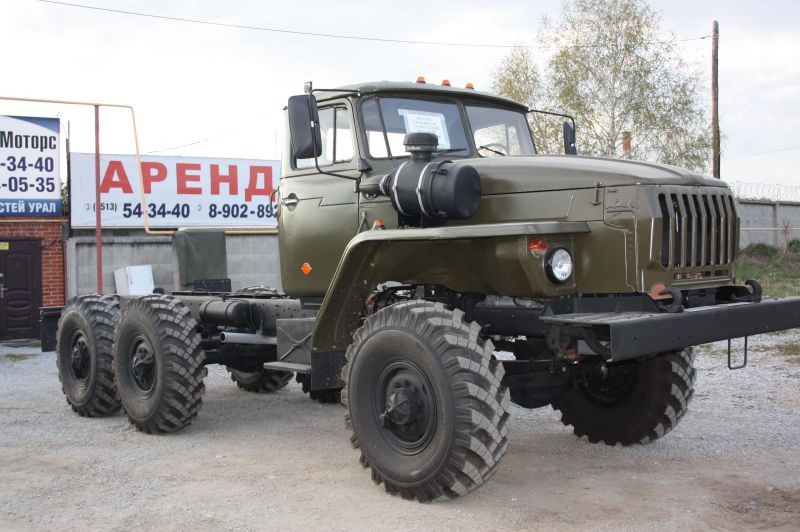 The wheels and tyres

The car of domestic manufacture has disk wheels with a rim 400G-508. If to speak about tyres, they go ID-P284 (it is possible to establish also I-247B) wide profile type with function of adjustment of pressure. It is possible to reduce the pressure to 1.0 kgf/sq. cm for a short time in order to overcome difficult areas. There are only 7 wheels, one of which is a spare wheel, and does not have a specially designed fixing point.

Here you can find the availability:

The hydraulic drive is controlled remotely, where the electropneumatics are responsible for the control.

Electrical scheme of the Ural-5557 truck is single-wire, has a negative pole of electrical energy sources and consumers, which is connected to the “mass” of the machine by means of a remote switch. On the car you can find a speedometer, which is mechanically driven, and other electrical devices: a generator with a rectifier unit, tachometer and more.

Brake system provides the truck with the brakes to slow down and stop fully, regardless of speed, slope and load. The brakes together with its drive are mixed (pneumatically-hydraulic). The drive is also double-circuit, with separate braking of the rear and front axle pairs. The truck’s brakes allow the truck to be controlled from the cab, which is connected to a two-section brake crane, traction rods and levers.

On the platform of the truck was created a lot of modifications for different tasks. There are even unusual equipment, for example, an army armored truck. Below will be listed the most common equipment Ural-5557.

The price of the machine will depend on the level of equipment and timing of creation. The newest farmers, in which there is a bilateral unloading, will be estimated from 2 000 000 rubles. Triple-sided unloading will cost from 2,200,000 rubles. Quarry dump trucks with forage unloading are also sold, their price starting from 1 800 000 rub. From the hands of the device can be purchased from 500 000 to 900 000 rubles 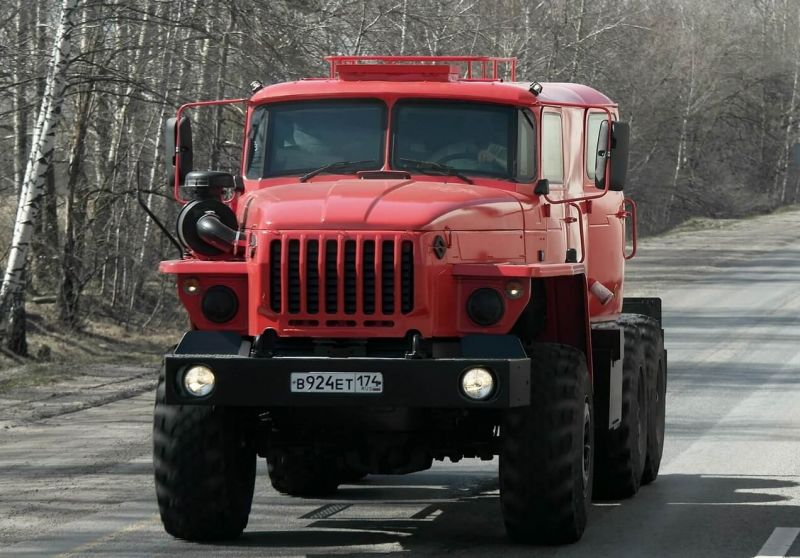 In general, the Soviet truck Ural-5557 turned out to be very popular, because even now, many years later, it continues to be used, and in various industries. Because of its platform, the model has a great application not only in agriculture because of the rising platform. It goes as well as fire protection, truck crane and just a dump truck.

It is distinguished by its good cross-country ability, high ground clearance, all-wheel drive. Moreover, it can be operated in temperature modes from -45 to +45 degrees, which makes it quite universal. Of course, the main disadvantage is its huge voracity, but in those days, diesel fuel was very cheap, and it was easy to get, so there was no question. 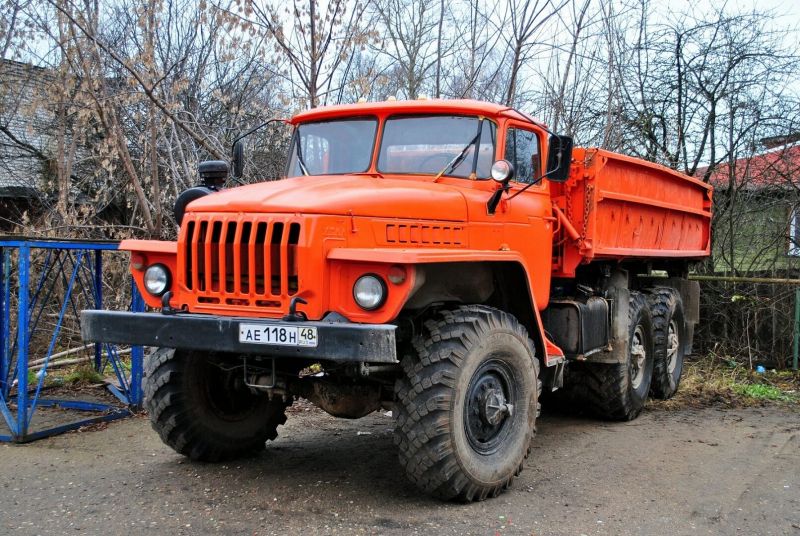 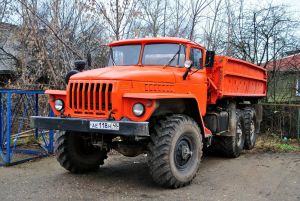 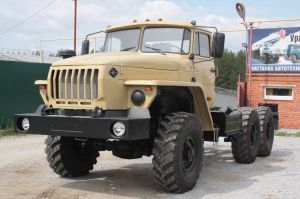 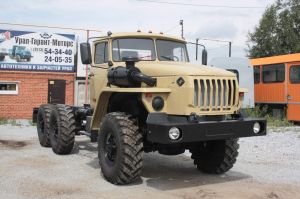 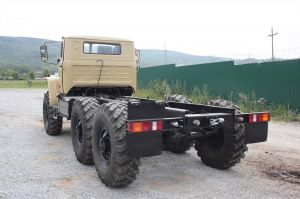 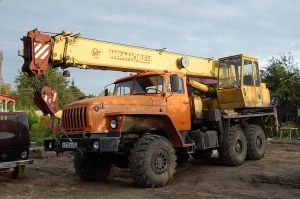 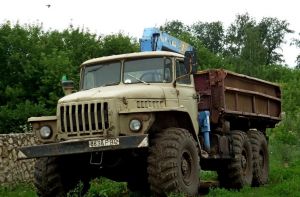 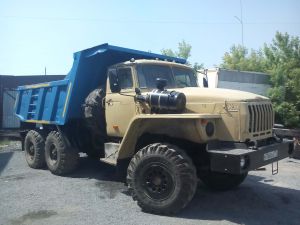 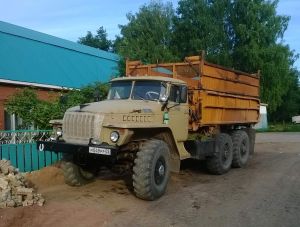 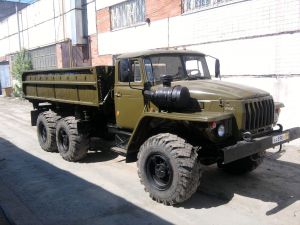