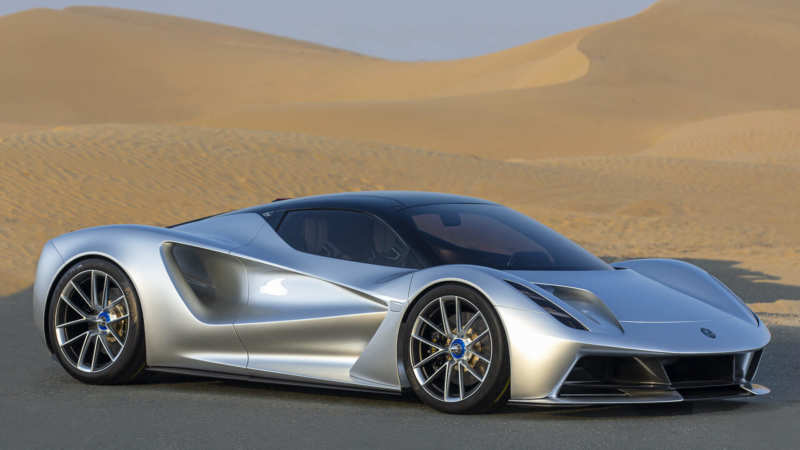 Looking at the exterior of the Lotus Evija electric car, you realize that it has more in common with Ferrari than with Lotus. This is partly due to the original shapes of the main parts, a large number of air intakes, formidable optics, upward-opening doors and other details seen in the photos. As it should be for a sports car, the front area has received a lot of space and is responsible for the excellent aerodynamics of the car. It has a large width, slope and plenty of relief.

The hood has received a large depression in the center, cutouts for cooling the under-hood space and large protrusions on the sides. These protrusions boast long strips of headlights, placed almost vertically. Inside, the British decided to use laser lights, which do not spend a lot of energy, but provide excellent illumination of the roadway. The new Lotus Evia has received a lot of decorations. 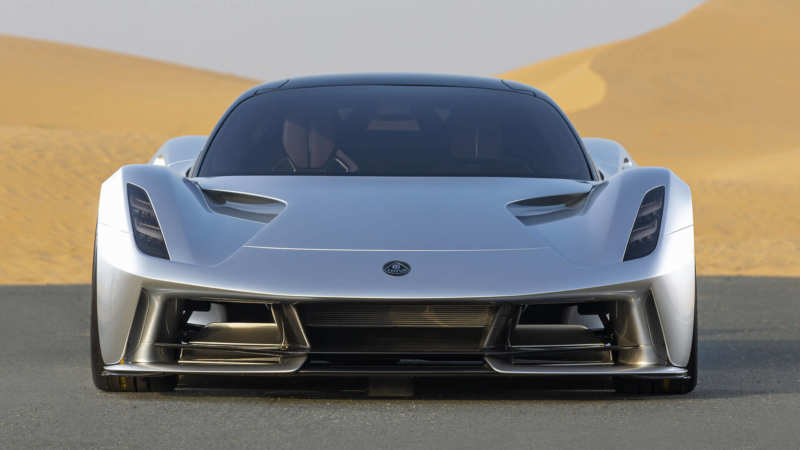 Almost all the free space was allocated for the air intake systems, which are connected to each other only by narrow strips of the body. In addition, there is room for a huge amount of stepped relief and other height transitions. This had a positive effect on the aerodynamics of the supercar. The side of the electric car received large doors that open upwards. The doors themselves have small windows and the main part, on which they placed an abundance of relief.

On the side of the Lotus Evija Hypercar received air intakes, bringing air to the brake system and engine compartment. The lower part is not without huge wheel arches and sports skirts. It is important to note that the novelty received Venturi tunnels, so named after the Italian physicist Giovanni Venturi. They are “cut” on the side – from the doors to the back of the car.

The air flow passes through their narrowed part of the pipe, which results in a rarefaction zone with reduced pressure at the outlet. For the first time this option the British decided to apply on their own race cars back in the 1970s. To improve the aerodynamics of the car, engineers decided to abandon the side mirrors.

In exchange, they installed cameras, the image from which is broadcast on the displays located inside the car. The novelty is supported by large 20-inch wheels at the front and 21-inch “rollers” at the back (magnesium wheels and Pirelli Trofeo R tires). The ground clearance height is only 105 millimeters.

During the development of the new electric car, the British were assisted by high-class specialists from Williams Advanced Engineering, Integral Powertrain Ltd, CPC of Modena, AP Racing, Osram and, of course, Geely Automobile. 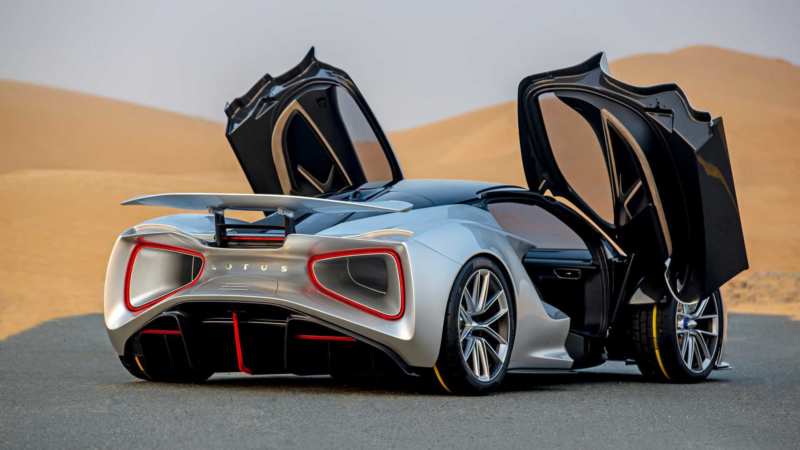 The stern, as all cars of this type should, has a long and wide shape. It begins with a sloping roof, which also represents the luggage compartment lid. Then the body begins to expand greatly. Here there is a place for a retractable spoiler, which improves numerous indicators of the vehicle, a huge amount of relief, stylish dimensional signals, as well as air intake systems.

The very bottom part of the Lotus Evia is equipped by the Brits with a massive diffuser, stop lights and decorative exhaust outlets, necessary for the more aggressive appearance of the electric sports car. In the middle of the rear, there is an opening hatch for charging the electric car.

The new Lotus Evia 2020 electric car is very striking with its interior equipment. There are light, but high-quality materials, such as carbon fiber, alcantara, leather, and so on. In general, the novelty interior looks more like a racing bolide than a usual sports car. Very impressive is the qualitative, pleasant interior illumination, which brings the interior to a new level.

Rather non-standard looks “dashboard”. It is equipped with a big monitor, located behind the steering wheel and a long strip of analogue keys for its control, installed vertically in the center. The tunnel is equipped with only a small number of buttons and an armrest. There are almost no organizers inside. The driver gets a virtual dashboard combined with the multimedia system. The Lotus Evija 2020 sports car is equipped with a multifunction steering wheel, which has the shape of a steering wheel. 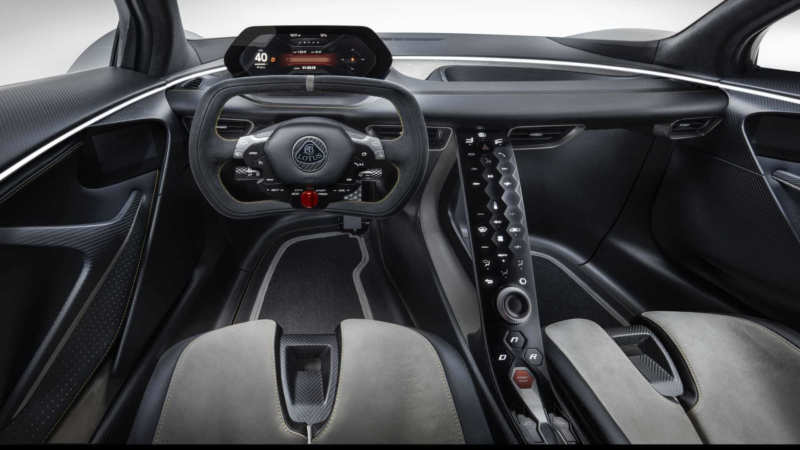 Lotus Evija claims to be the most powerful car allowed on public roads.

There are only two seats in the car. They stand out for their comfortable shape, as well as for their ability to provide passengers with a high level of comfort and safety. The seats received a chic side support, heating, as well as a large number of electric adjustments and other options. As a result, the interior of the new electric car is of high quality, modern, comfortable, but more like the cockpit of a racing car than the interior of an electric car.

It is noted that the new model Lotus Evaya was developed together with specialists of Williams Advanced Engineering, which supplies components of the technical stuffing for the car electric formula E. The very motors and inverters of the novelty received from the company Integral Powertrain LTD. Each wheel has a 500-horsepower electric motor with a small planetary-type gearbox. All together they generate 2,000 horsepower (1,700 Nm). Each motor, its gearbox and inverter are assembled into a compact Electrical Drive Unit.

The company says that the electric car will need less than 3 seconds to cross the 100 kilometers per hour mark. The next second hundred will also take about three seconds. The mark of 300 kilometers per hour is reached in 9.0 seconds. Expected “maximum speed” will be at the level of 320 kilometers per hour. Technical arsenal of novelty has received a driving electronics, allowing to change characteristics of work of units and units of the car with five built-in modes: City, Tour, Sport, Track and Eco.

Despite quite excellent dynamic performance, the curb weight of the British electric car is solid 1,680 kg. The car’s monocoque itself weighs only 129 kilograms, as it is made of carbon fiber.

The Lotus Evia’s heavy battery is placed behind the seats. Thanks to this solution, an ideal axle weight distribution was achieved. The battery itself has a capacity of 70 kWh. To cool it, engineers have provided four radiators at once. This allows the novelty to “break free” on the track for about 7 minutes, before its battery will be completely discharged (Tack mode). In a sparing Eco mode, you can go about 400 kilometers on a single charge.

To charge the batteries comes with a 350kW charger that provides an 80 percent energy replenishment in 12 minutes. The AUB will be fully charged in 18 minutes. Eventually there will be an 800 kW charger. It will allow the car to be recharged in just 9 minutes. What’s more, the company has developed the ability to replace a dead battery with a new one. This requires a minimum amount of time, which is very important during the running-in of the electric car on the track.

The Lotus Evidge’s braking system boasts AP Racing carbon-ceramic brakes. The suspension has Multimatic adaptive dampers with spool valves. Shock absorbers are placed in the center of each axle (bar pattern). Interestingly, there are a total of 3 shock absorbers in the rear and 3 shock absorbers in the front as well. Two are needed to control the inclination of the body and the 3rd is for vertical vibrations.

The company plans to produce the electric hypercar at its own headquarters in Hethel. The price of the Lotus Evija starts from £1,700,000. Only 130 examples will be produced in total, so the number of cars is limited. The first customers will get their powerful cars only in 2020. Those who wanted to buy the novelty company offered to make a deposit of 250,000 pounds and have patience. 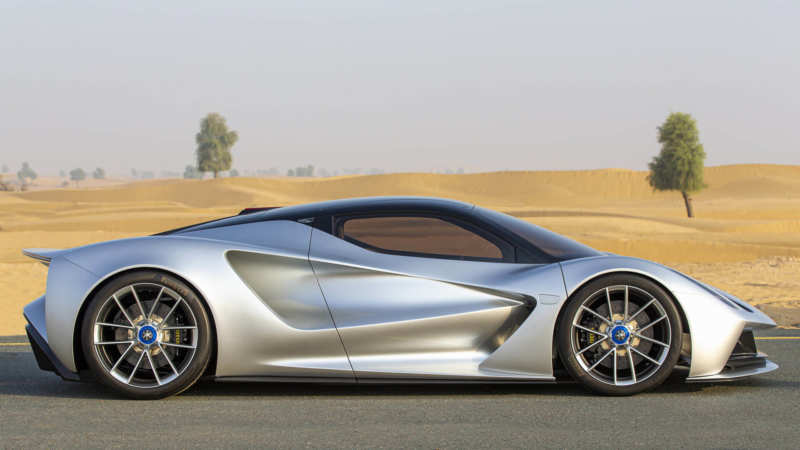 The basic package of the Lotus Evija 2020 received a climate control system, a multimedia system with Apple CarPlay and Android Auto support. In addition, “over-the-air” updates are available, as well as remote control from a smartphone. Osram’s laser-luminaire headlights function in low- and high-beam mode for the first time on a road car.

Those who plan to buy this model are offered an extended program of personalization, which provides a choice of body painting, interior trim materials, decor and badges in the form of the country flag or family coat of arms. All cars are assembled by hand.

In this challenging niche, there are also competitors for the British model. Here we can include one of the fastest road electric cars made in Croatia – the Rimac C-Two with 1,914 “horses” (2,300 Nm). It also includes the Tesla Roadster which reaches 100 km/h in 1.9 seconds and the Pininfarina Battista.

The electric car can compete even with cars with a combustion engine. This includes Ferrari 458, Lamborghini Aventador, Bugatti Chiron, many Koenigsegg and Pagani cars.

As you can see, the British company also decided to release a very powerful electric sports car, which is able to confidently compete with many famous companies in the automotive market. It stands out for its unusual, modern and sporty appearance, high aerodynamics, thoughtful interior with comfortable seats and “steering wheel”, as well as powerful technical equipment.

The battery can be easily recharged from a basic charger in just 18 minutes. A big plus for the Brits is the fact that their car can drive safely on public roads. Let’s see how the new Lotus Evija 2020 model will prove itself in business, as the first lucky customers should receive it this year.

We advise you to read the article: Lotus history