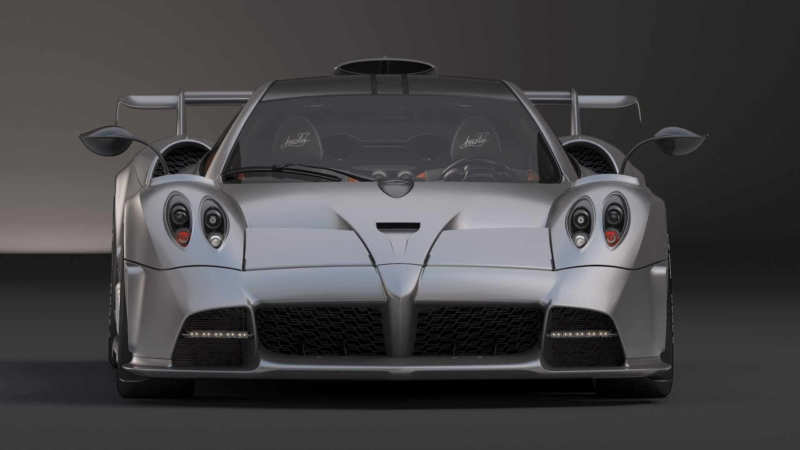 Pagani Huayra Imola is a “charged” hypercar model produced by the Italian Pagani model. Italian engineers continue to exercise in the design of small-scale exclusive supercars.

In September 2019, the Italians declassified one of the most extreme modifications of the Huayra hypercar, which was named Imola. And in February 2020, the company officially showed the new car, promising to bring it to the March 2020 Geneva Motor Show. The entire Pagani lineup.

Why did Pagani Automobili’s expensive and rare sports car get the name Imola? The reason is that the new supercar during the preparation for the conveyor assembly literally settled down at the Enzo and Dino Ferrari racetrack. In fact, the cars have driven more than 16,000 kilometers on the racetrack.

And as a sign of appreciation for the hospitality of the circuit, Horacio Pagani decided to name the novelty Imola. The hypercar should not be confused with the sports car Pagani Huayra, which was released back in 2011 as a replacement for the Pagani Zonda.

The base for the novelty was a modified Carbo-Titanium HP62 G2 composite monocoque, as well as the Carbo-Triax HP62 from the Roadster BC, which debuted last summer. Tubular steel subframes were bolted to the front and rear. Regardless, almost all of the exterior panels are new, optimized for race track driving.

Pagani Imola has a carbon fiber body and a special design of the side skirts, which according to the development department should be similar to the Zonda 760 version. On top of that, the two-door model has a more massive air intake on the roof and a huge antifender. Only 4 kg were saved with Accqarello Light paint. Unusually, but the exterior decor of the “Italian” differs from car to car. 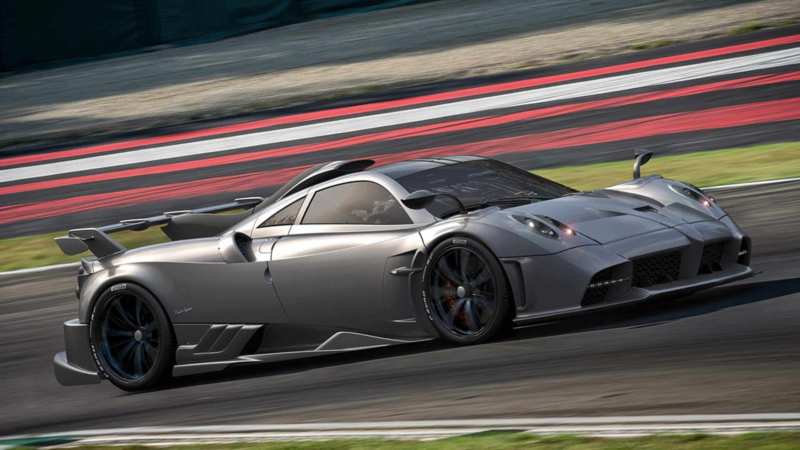 For example, the debut car, designed especially for the head of the Russian atelier TopCar Oleg Egorov, is equipped with a glossy black body paint, which has eye-catching orange accents all around the perimeter of the vehicle. But the two-door model, which Italians showed this winter, did not receive such contrasting inserts, and the body of it is matte gray. However, this does not prevent the car look spectacular. 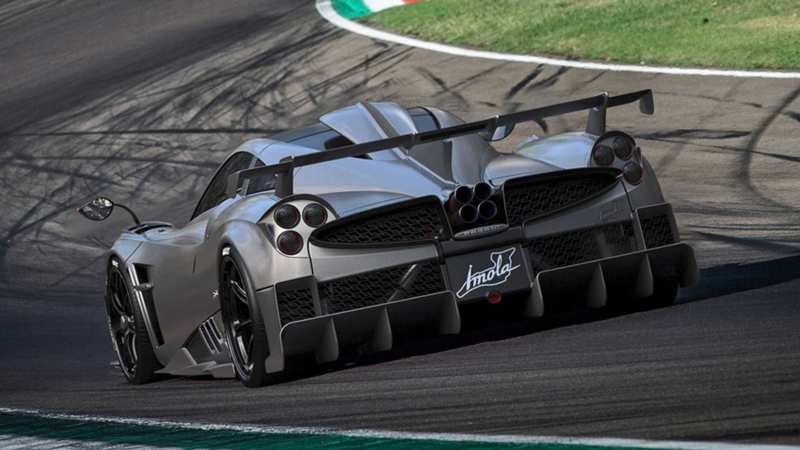 Like all other combat sports prototypes, the Imola has an elaborate, rather monstrous-looking aerodynamic finisher. The aesthetic qualities of the Pagani Imola 2020 have been relegated to the background, because the development department sought to achieve the highest possible speed. The powerful Italian hypercar is based on 20-inch forged front wheels and 21- inch rear ones. The rubber is also used here of a special type – Pirelli Trofeo R, which is oriented to the maximum speed of more than 350 kilometers per hour.

You should not expect anything exquisite from the interior of the Italian supercar either, because the engineers tried to put high dynamic performance at the forefront. Nevertheless, many connoisseurs of the brand will recognize the car. The interior boasts rich leather and faux suede trim, plenty of uncovered carbon fiber panels and incredible attention to detail.

In front of the driver there is a sporty functional steering wheel, behind which the multifunctional dashboard is hidden. The gearshift can be controlled using the paddle paddles. The central part is given to the on- board computer display, which displays all the necessary information about the car. On the left side there is a large tachometer and on the right side there is a speedometer. 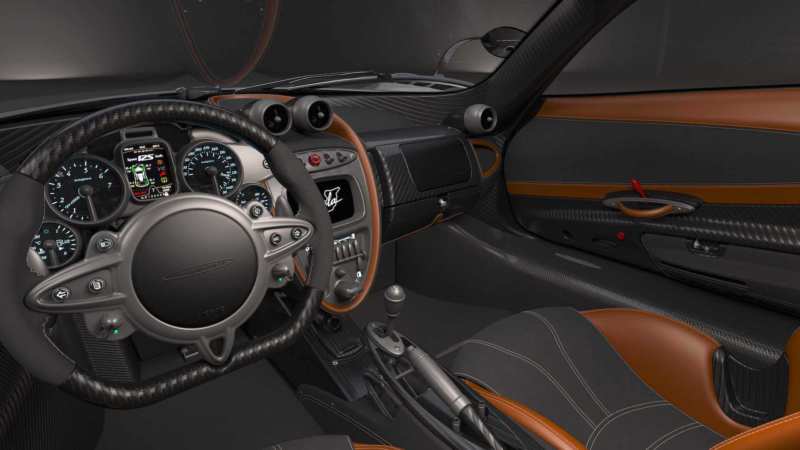 The creators of the expensive exclusive hypercar assure that the body in terms of aerodynamic performance, they have optimized for 150 percent. There is simply no way to create something new today.
The center console of the Pagani Imola 2020 at the very top boasts stylish ventilation system deflectors that look like jet plane nozzles. Then there are the mechanical controls for various functions and the multimedia system display. The seats have a bucket-shaped shape with excellent side support. They are light and sporty. Between them, the company’s engineers placed a mechanical parking brake.

The heart of the Italian hypercar is a 6.0-liter V 12-cylinder power plant from Mercedes-AMG, which has two turbines. However, the Italian engineers thought this was not enough, so they slightly modified the engine, so it generates 827 horsepower (1,100 Nm).

All torque is transmitted to the rear wheels via a 7-speed Xtrac robotized gearbox with a 3-disc clutch and Smart Gas technology (lightning-fast shifting). Some work has been done on it, too, to make shifting faster. On top of that, there is an electronically controlled locking rear differential.

When creating the extreme version of the Pagani Imola, the development team tried to make the structure of the original model as light as possible. To achieve this, they installed aluminum, carbon fiber, titanium and chromium-molybdenum steel everywhere, which had a positive effect on the coupe’s weight – only 1,246 kilograms. But it’s not just the engine and gearbox that make the novelty stand out.

Imola has other distinctive settings of the suspension, which received active shock absorbers, which are adjusted on each of the wheels by a special device. It also controls the operation of the engine, the transmission, and the differential. 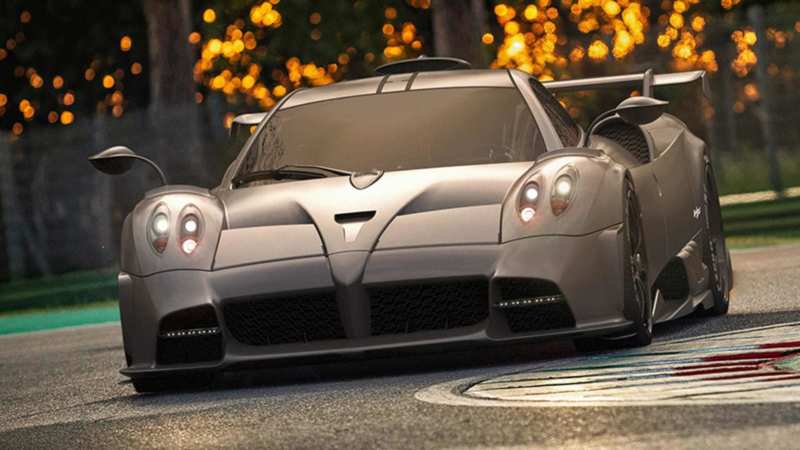 In total, only 5 such models will be produced. The price of the Pagani Imola starts at 5,400,000 euros, which is quite a lot. However, it is customary to pay such money for such unique and small production cars. The equipment may vary slightly, so a lot depends on the particular buyer. 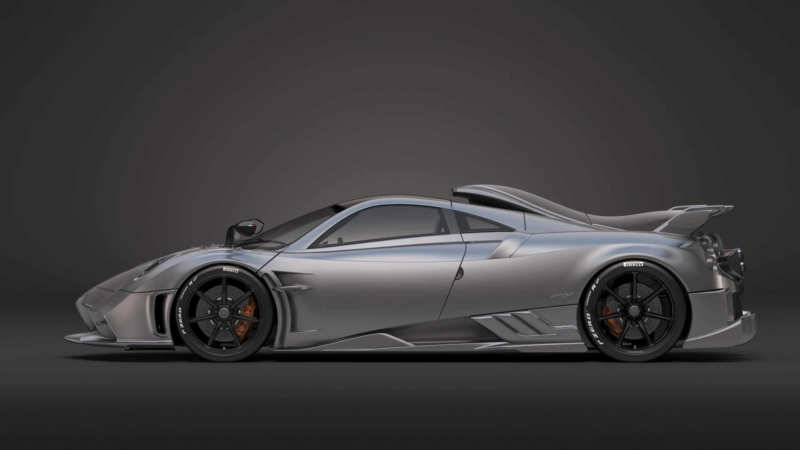 Not so long ago, when the Wyra sports coupe was first shown, the Italian company had few rivals that could offer wealthy customers a similar level of engineering and design, but today the situation has changed. The Pagani Imola’s competitors could include the De Tomaso P72, Gordon Murray T.50, The Hennessey Venom F5, and the SSC Tuatara.

These are only conceptually close to Pagani’s new models, i.e. mid-engine hypercars with a traditional internal combustion engine, how many more hybrid and electric cars exist that give a whole new level of dynamic qualities. So even in this segment of the car market there is already a serious struggle.

This is an excellent 2020 hypercar, which will be able to compete with its closest competitors. Although, perhaps, the company’s management did not strive for this struggle, because they have produced an extremely limited number of cars (5 copies). The Italians are not trying to prove something with their mouths, they just make excellent and innovative models.

According to the brand representatives, the Pagani Imola 2020 is the fastest and most dynamic car in the history of the Italian company. In addition, they boast a high level of control, which is comparable to Formula 1 cars. The result is an excellent modern hypercar, which only wealthy people will be able to feel all the charms. 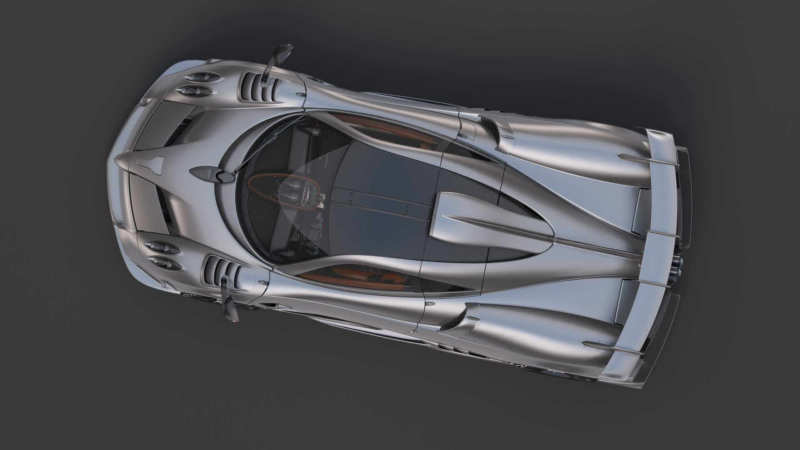 You are advised to read the article: History of Pagani

Similar news
The history of Pagani
Pagani Zonda R
What is the beast Pagani Huayra BC?
Huayra can be better!
Теги: