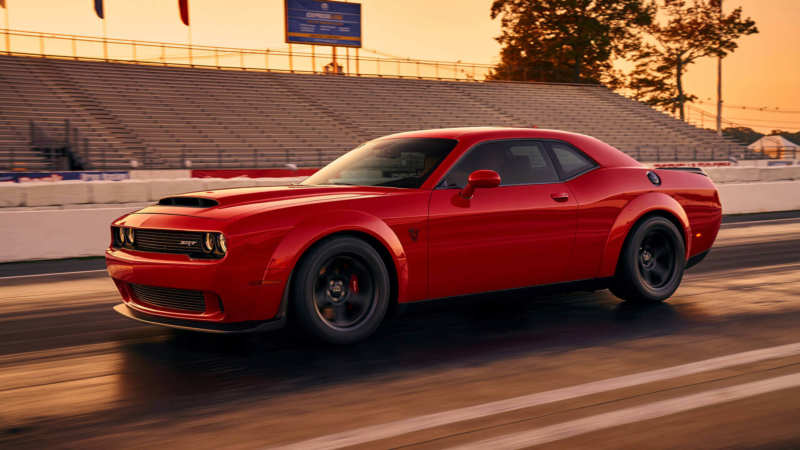 The highly anticipated sports car was finally shown in New-York during the Motor Show. It is the company’s most extreme model. The American novelty was built on the platform of the 707-horsepower Challenger SRT Hellcat, which against the background of the Dodge Demon does not look like such a powerful model.

The new sports coupe immediately conquered several records. The car was long awaited, and the company only fueled interest for 3 months with small portions of information about the novelty. In total, the company created only 3,300 examples of the Dodge Challenger Daemon. The whole model range is Dodge.

In general, the car is easily recognized by the developed wheel arches and sidewalls, as well as by a large number of nameplates SRT Demon. The car stands out by extreme avant-garde. American model just instantly attracts everyone’s eyes. There are many reasons, one of which is the body of coupe-like type, which has brutal, chopped outlines. The Dodge Challenger Demon’s headlights boast integrated LED “rings” of exhaust lights.

Taking a closer look at the photo of the front end, you can see the holes in the interior headlights. Through them, air flows to the mechanical supercharger and then to the powertrain. Just think, through these holes in the headlights, the Dodge Challenger SRT Demon’s motor takes in 32,500 liters of air every minute at maximum mode. That’s 18 percent more than the Hellcat engine can handle. At the same time, the new model weighs 92 pounds less than the Hellcat. 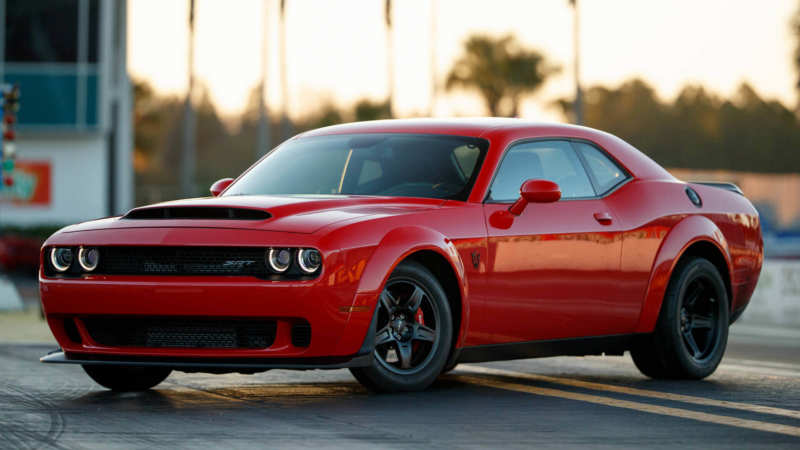 Interestingly enough, during the presentation of the New Dodge Chalenger SRT Demon, Vin Diesel himself, known to many as Dominic Torreto, the main character of the movie Fast and Furious, came out. You could hardly find a more suitable personality for the first presentation of the most powerful muscle car in the history.

The car looks aggressive thanks to the huge air intake on the hood, the massive front bumper that has a protruding splitter, as well as huge exhaust pipes. It is important to mention also the tires of the sports coupe series assembly, included in the basic equipment. These are slicks Nitto NT05R. Also the Hellcat has 20-inch wheels, and the Demon has 18-inch wheels. 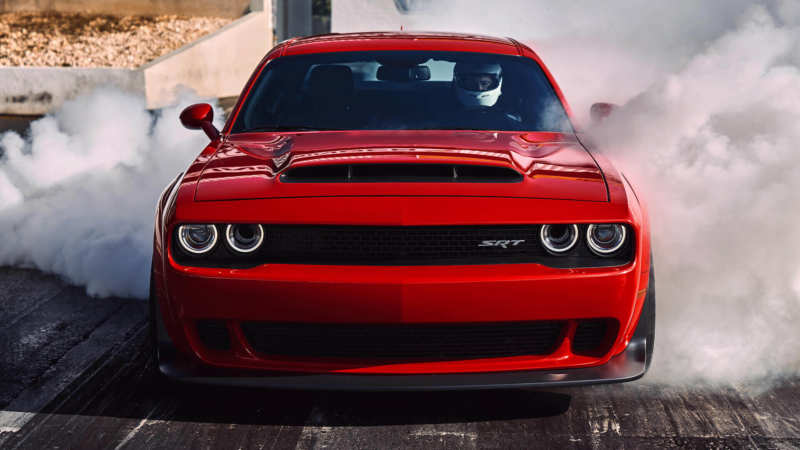 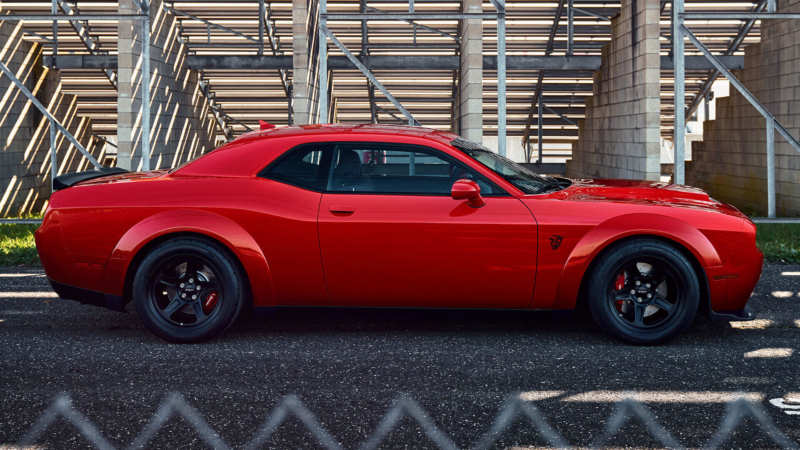 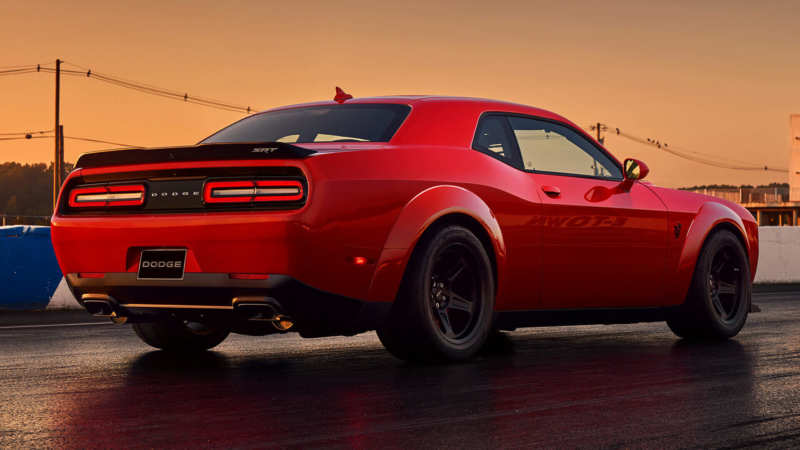 The engineers of the American company decided to do so in order to install thick racing tires that crumple during a sharp start.  Some photos of the Dodge Challenger SRT Demon show that the car has narrow dragster tires up front. They are supplied to owners of the sports coupe to demonstrate the company’s specified dynamic capabilities.

Looking at the interior of the Dodge Challenger Demon it is worth saying that it looks good, but there are questions about the quality of the finishing materials. All panels are made of oak plastic, unpleasant to look at. Of course, the problem is partially eliminated with real aluminum and alcantara, which can be seen on the controls. As for the dashboard, it is equipped with a white background of analogue instruments, and the digitization of “instrumentation” is made in black.

Such decision as if inspires thoughts about the sporty mood of the car, as well as guarantees good readability. There are also two keys – black and red. If you start the car with the black key, the power unit will generate 500 horsepower, and with the red key the power will grow to 808 “kobyls” with standard 92 gasoline. 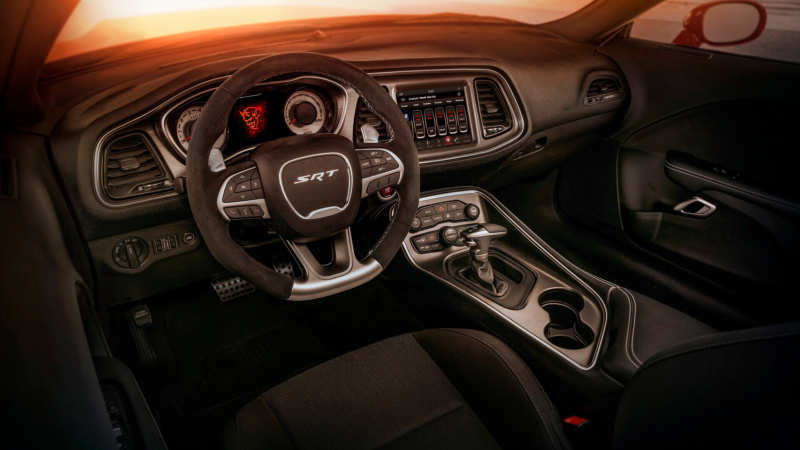 The center console boasts a multimedia and entertainment system display. Here you can display not only data from the navigation system and images from the rear camera, but also some information from the on-board systems of the sports coupe. The driver’s seat has a pronounced side support. However, it cannot be called an uncompromising racing “bucket”. It is interesting that only one driver’s seat comes by default.

The reason is that almost half of the won 92 kilograms is all the merit of seats. But, if the buyer wants, he can install a seat, along with the second row for token money ($1). The seats themselves can be fabric, leather, or have a combined paneling.

Optionally, you can even install a quality music center Harman Kardon, the power of which is 900 watts. To get rid of unnecessary weight it was also decided to sacrifice noise isolation, so it is not clear who will order such “music”.

The Dodge Challenger SRT Demon has a seriously upgraded 6.2-liter V-8 HEMI engine under the hood. On the Hellcat modification it develops 717 horsepower (881 Nm). In the same car specialists have increased the power up to 850 horsepower (1,044 Nm). To increase the power the engineers had to equip the power plant with an auger supercharger of increased volume (before it was 2.4, and now it is 2.7), and raise the boost pressure from 0.8 to 1 bar.

In addition to all this, the specialists redesigned the valve mechanism, installed more reliable connecting rods, and replaced the only fuel pump with two. After that, the maximum rpm of the engine has increased to 6,500 (previously it was 6,200). In 2.5 seconds the car can already accelerate to the speed mark of 100 km/h. 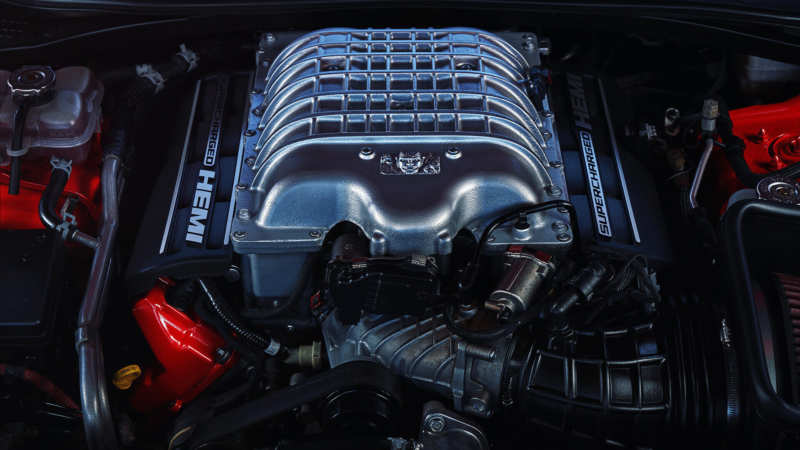 The ¼ mile drag strip is done in 9.65 seconds. The engine itself runs on the familiar 91 gasoline, but for it the company has provided a mode called “Demon Crate”. If you activate it, you can fill the car with 100+ high-octane fuel. Just in this case, the maximum 850 “horses” can be produced.

All efforts are transmitted to the rear wheels through the TorqueFlite 8HP90 8-band automatic transmission, which received a more reliable torque converter and transbrake technology.

Transbrake is a special brake integrated into the transmission that allows you to load the powertrain before starting and start moving at higher revolutions. On the “American” this technology allows starting from 2,350 rpm.

The suspension settings have been changed globally, making its work softer. For example, the springs stiffness has been reduced by 1/3. As for the anti-roll bars, they became more pliable. Rear wheel camber was reduced by 0.5 degrees.

All this is done to get the best start and stable behavior of the vehicle during acceleration. The coupe has a fully independent suspension that has electronically controlled shock absorbers with higher performance.

The Dodge Challenger SRT Demon is able to get up on its feet. Judging by the test runs, the car is able to move only on the rear two wheels about 89 centimeters. This is a new record for conveyor production models. Another record is the 1.8g overload experienced by the driver during acceleration.

The Dodge Challenger Demon differs from the “base” version, as it uses smaller brakes (18-inch, instead of 20-inch). Instead of 6-piston calipers at the front there are 4-piston 360-millimeter “pancakes” from Brembo. As for the rear brakes, they can be turned off altogether to let the wheels spin to warm up the tires before the start.

In total, as we mentioned above, only 3,300 Dodge Challenger SRT Demon cars were produced. The last car left the factory on May 31, 2018. The cost of the car starts at the $84,995 mark. If you order all available options, the price tag comes close to the $100,000 mark. And there are plenty of options here. So the car has: 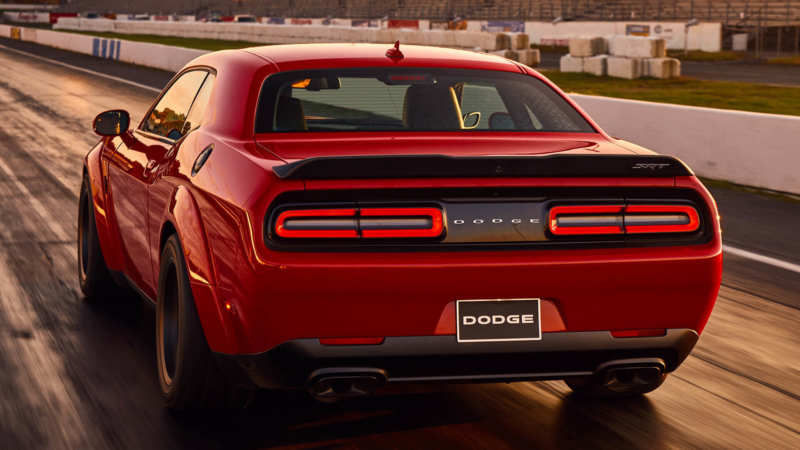 Not every car can compete with such a powerful American supercar. Thus, the competitor of Dodge Challenger SRT Demon can be Ford Mustang Shelby GT500 with the Super Snake package, as well as less powerful model Chevrolet Camaro.

The new Dodge Challenger SRT Demon will forever go down in global automotive history as one of the most charismatic and dynamic cars. It has a spectacular and brutal body design, an acceptable level of equipment and racing technology. The sports coupe has got hurricane-like acceleration dynamics, a comfortable seat, a technological chassis, as well as a pleasant sound of the engine and exhaust system.

At the same time, the car has a huge fuel consumption, high wear of the rear tires, expensive maintenance and difficult to find spare parts. The super-powered powertrain makes your heart beat harder, but you can only use its full potential in a straight line. Without special tires, this is a standard powerful muscle car. But you have to give credit to the American company Chrysler, they managed to make some noise in the automotive world. 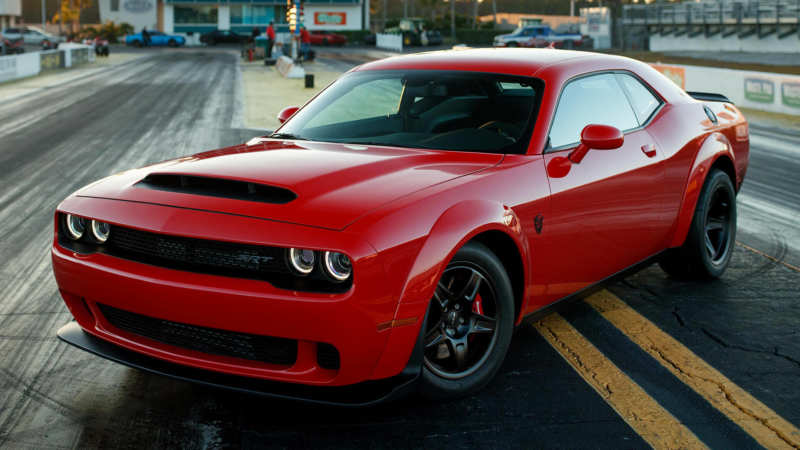 We advise you to read the article: History of Dodge 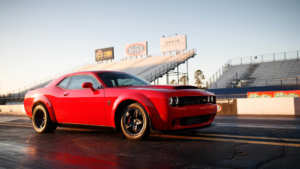 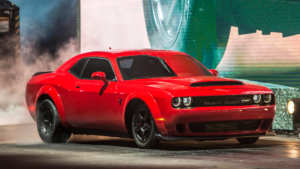 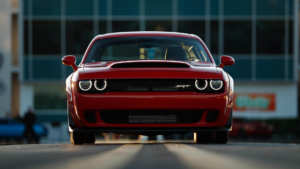 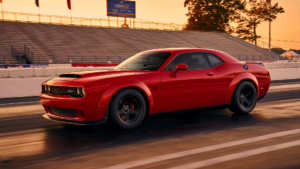 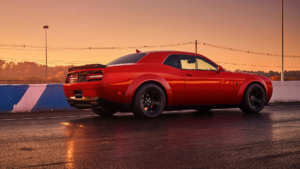 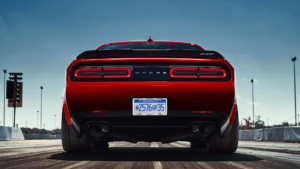 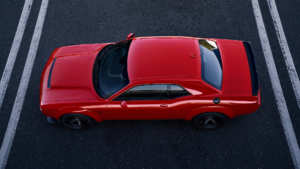 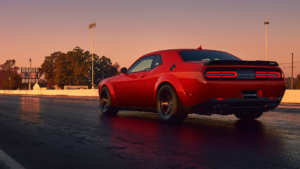 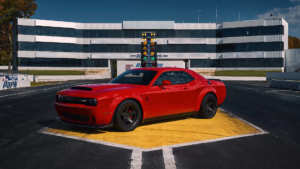