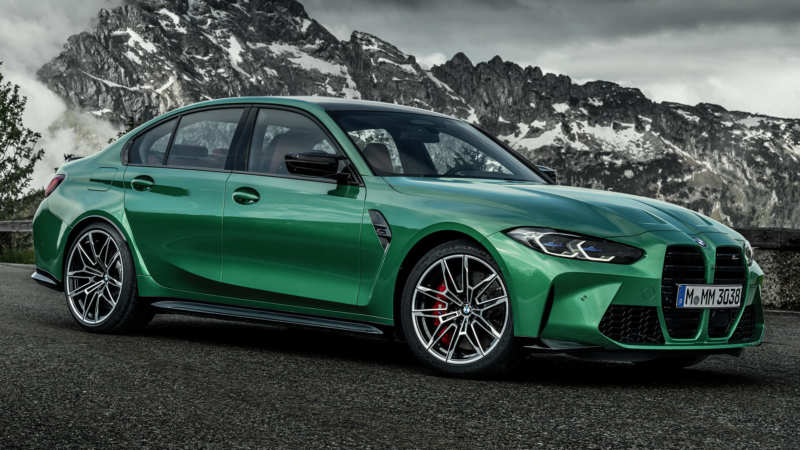 The BMW M3 is a rear- or all-wheel-drive premium sedan in the mid-size category (aka “D-segment” according to European norms) that successfully combines a high level of comfort and safety for everyday driving in urban conditions with a truly sporty character. Initially, the car is focused on purposeful and successful people who want to have a truly “driving” car that is suitable for everyday driving.

In total, the Bavarian company has released six families. The last six-generation BMW M3 G80 was presented on September 23, 2020, during a virtual presentation. The novelty has received traditional M-attributes in the appearance and interior, and it is also equipped with a turbocharged powerful gasoline “heart.” Bavarians have released an additional series BMW M3 Competition for those who are not enough. The entire BMW model range.

Initially, the car BMW M3 Production should have been shown much earlier, more precisely in 2019, but the Bavarian engineers did not have time to fully prepare their “brainchild.” As soon as the new BMW 4-Series came out, quite a few car enthusiasts were unhappy with the enormous nostrils. They are also there, and it was decided to place the license plate in the middle part of the radiator grille. Very stylish and sporty looks, the hood, which has large convex two stripes, passing into the grille.

These bulges are equipped with two more air intakes. The optics of the BMW M3 Competition 2020 remain the same, but the bumper has been completely changed. It now boasts convex shapes with two side air intakes that cool the braking system. Very spectacular look headlights, having U-shaped sections of the running lights. By default, the “German” has only LED optics, but you can install adaptive units with laser elements as a different option. 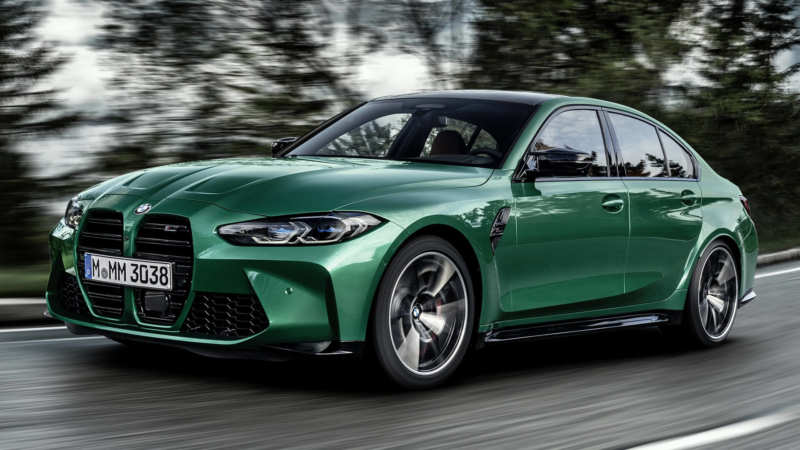 From the side, the new BMW M3 Performance 2020 stands out for its super sports car elements – a large gill. Its black color can be traced in the lower skirts and the window trim with side mirrors. From the “normal” sedan, the BMW M3 Competition version differs in the wheels’ size.

Charged version received 19-inch front and 20-inch rear wheels (base sedan has 18- and 19-inch “rollers,” respectively). The height of the ground clearance is fully in line with the sports specifications – 120 millimeters.

If you pay extra, you can equip your car with the “M Carbon” exterior package, which includes a splitter, side skirts, spoiler, diffuser and exterior mirror housing made of carbon. 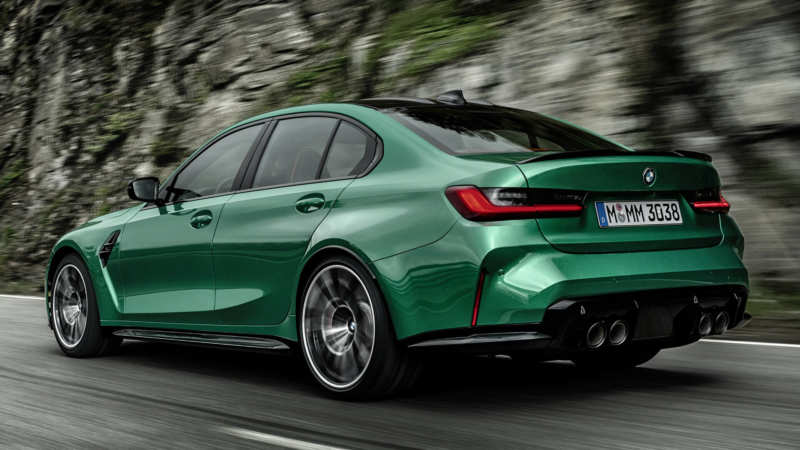 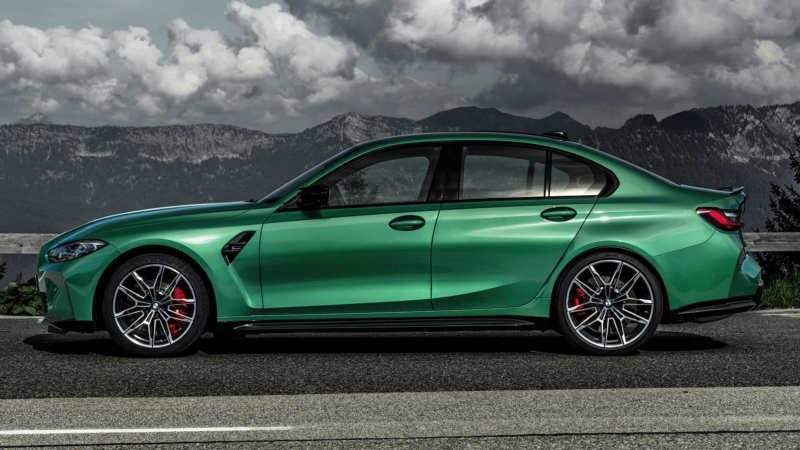 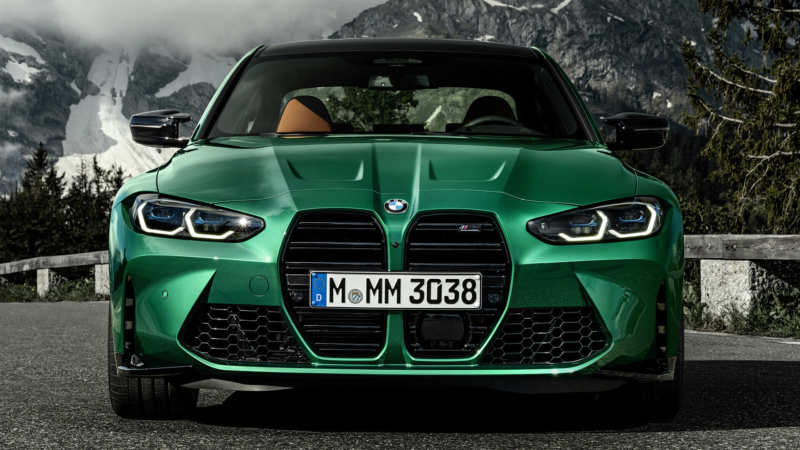 The rear of the new German sports sedan has the former luggage compartment lid, which has an additional spoiler. Also the group of engineers decided to change the bumper with vertical diverters of hot air flow from the braking system. At the bottom of the rear bumper there is room for a large diffuser, where a four-barrel exhaust system is installed (each pipe has a diameter of 100 millimeters).

Similar aerodynamic elements can be found even on the full carbon fiber roof. The Bavarians have provided 14 colors of body paint and some appearance modifications for the buyer’s wheel rims.

The BMW M3 Competition interior completely corresponds to the civilian version but is not devoid of unique moments. The M Sport seats with massive side support, heating, ventilation, and many electric adjustments immediately catch the eye. Moreover, the “M3” nameplate on the headrest is illuminated, which looks very interesting and sporty.

The M Track package is available as a different option, which features more aggressive seats with a carbon shell. Thanks to such centers, it is possible to reduce the weight of the vehicle by 25 kilograms. Of course, the comfort level drops significantly, but the owner will get a completely different sports feeling. 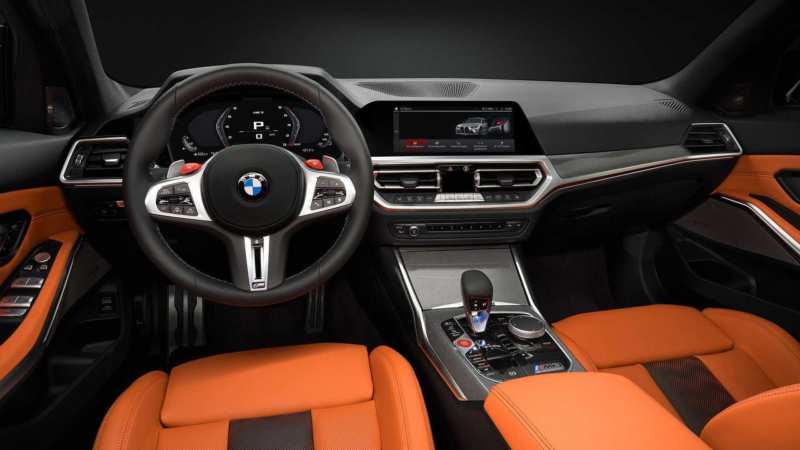 The second distinctive feature is the carbon itself’s presence, with which the torpedo and the tunnel are decorated. The interior is much more trimmed with Merino leather, which can be chosen from eight available variations. Carbon can be noticed even on the steering wheel (optional), which acts as the third difference.

Directly in front of the driver, German engineers have placed a 3-spoke steering wheel with function keys, paddles, and additional red keys “M1” and “M2”. These buttons are used to activate the individual driving modes. The necessary equipment of the sports car boasts a 12.3-inch electronic dashboard with information projection. 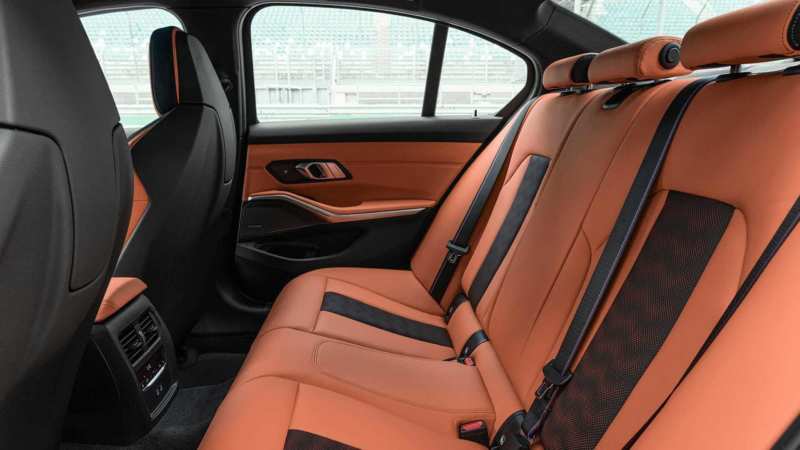 A 10.25-inch multimedia system has been installed in the central part of the cabin, supporting Apple CarPlay and Android Auto. The car is equipped with three-zone climate control, a Harman Kardon sound system with 16 speakers and 464 watts of power, and background diode lighting. The sporty atmosphere of the cabin is enhanced by the carefully selected color schemes of the upholstery. On the second row, there is enough space for three passengers. And each of them has its headrest. However, the person sitting in the center can be hindered by the transmission tunnel.

The base version of the sedan gets a 3.0-liter gasoline inline six with a double supercharger, 24-valve timing, as well as direct fuel injection and phase shifters on the intake and exhaust, generating 479 horsepower (500 Nm). However, the technical characteristics of the BMW M3 Competition G80 2020 are different for the better.

The same “engine” the Bavarian company engineers were able to boost, producing 510 horsepower (650 Nm). If you take the combined mode, the fuel consumption of the BMW M3 will be 10.2-10.8 liters per

Every 100 kilometers. In contrast to the BMW M3 F80, there is a significant increase in the technical part. 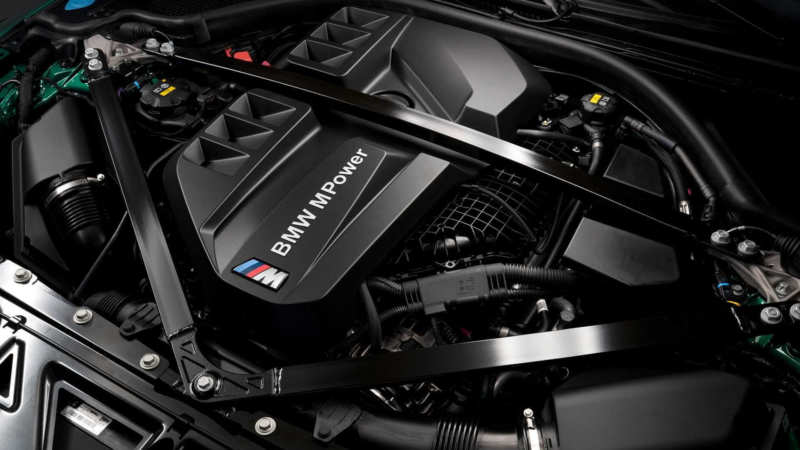 The exhaust sound can be adjusted with a valve in the exhaust system depending on the driving mode. In addition to this, the sound is broadcast through the speakers to the interior of the car.

If the “normal” version is equipped with a 6-speed manual gearbox, the charged version will be equipped only with an 8-band automatic gearbox. It is 22.7 kg heavier than a manual transmission. Simultaneously, the car is equipped with an all-wheel-drive m drive transmission, which got an active M differential on the rear axle. All this allows accelerating from a place to the first hundred in 3.9 seconds. However, the full-speed mode is limited by electronics at the level of 250 kilometers per hour. If you install the M Driver’s package, the top speed will increase to 290 kilometers per hour.

The four-wheel-drive system has three modes of operation. The 4WD method transmits torque to all wheels. When 4WD Sport mode is engaged, the lion’s torque share is transferred to the rear wheels, and the front wheels are engaged as required. If the 2WD way is involved, the car remains with only rear-wheel drive, bypassing any electronic assistants – only the driver and the vehicle.

The Bavarian company decided to use the CLAR modular platform as the basis, which implies the power plant’s longitudinal placement and extensive use of high-strength steel and aluminum. The front of the sports sedan has an independent McPherson suspension, and the rear has a multilevel system.

It is noteworthy that already the basic versions get adaptive electronically controlled shock absorbers. Good drivability was also achieved thanks to the suspension. There is an extended front track of 38 millimeters and Traction Control with 10-step interventions. The subframes are stiffer, and the body itself has a large number of struts.

The sedan is steered using the M Servotronic steering, which has an electric booster and variable transmission ratio. For timely and quality braking is responsible sound braking system, which received 380-millimeter front and 370-millimeter disc brakes. It was decided to install 6-piston calipers for the front and single-piston calipers for the rear.

The German company has always paid due attention to the topic of safety, so the new sports sedan is no exception. Thus, the safety of the BMW M3 Performance 2020 includes: 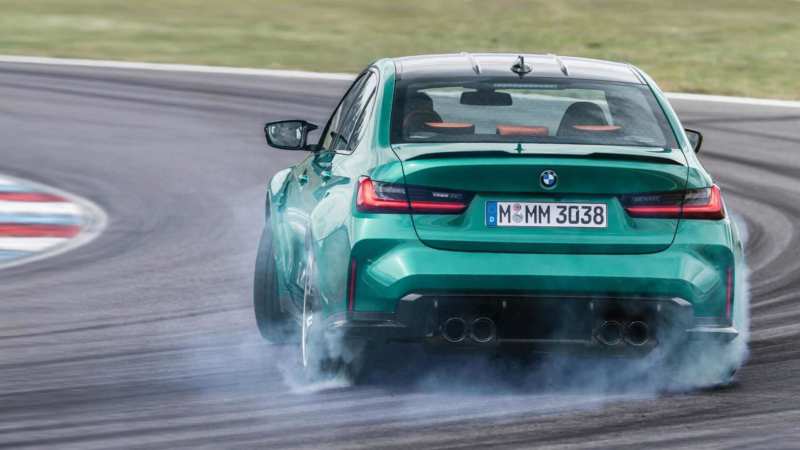 The sporty luxury niche cannot boast an abundance of cars, but the Bavarians still have someone to compete with. The lion’s share is allotted to the Mercedes-Benz C 63 AMG, the Audi RS4 and the Porsche 911.

What can we say at the end? Some may like massive nostrils and some may not, but we must admit that the appearance of the new BMW M3 Competition 2021 turned out just great. The car with its exterior says about its sportiness and makes the driver feel aggressive. The interior of the charged version continues this theme, setting the driver for a dynamic ride.

But although it is a sports sedan, the Bavarians have not deprived it of quality and expensive finishing materials, a comfortable interior and a

Variety of electrical systems. There is enough space on the second row, and there are no questions about comfort and convenience. 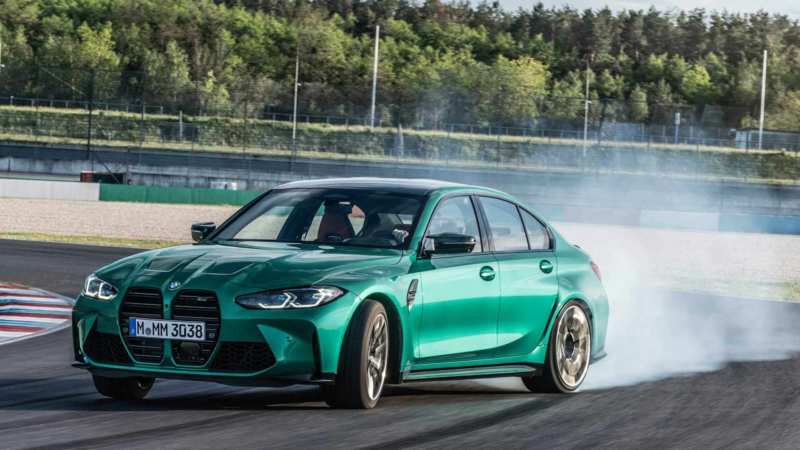 And what is worth a powerful engine and fast transmission, which, together with the four-wheel-drive system, clings to every bit of road surface? The car is stable and has a good grip not only on the road but also on the curves. It is felt that the engineers of the Bavarian company did a great job. The only thing left to do is wait for the official sales of the charged Competition version in Russia because it is the variant from the 6th generation of the sedan delivered to our market.

We suggest you read the article: History of BMW 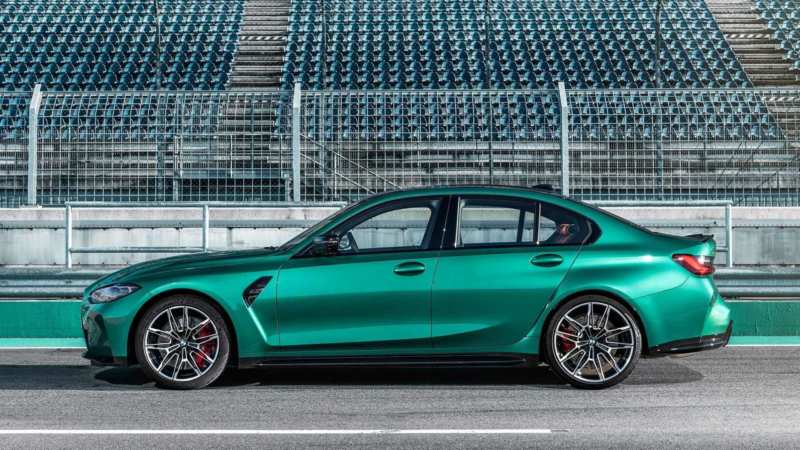 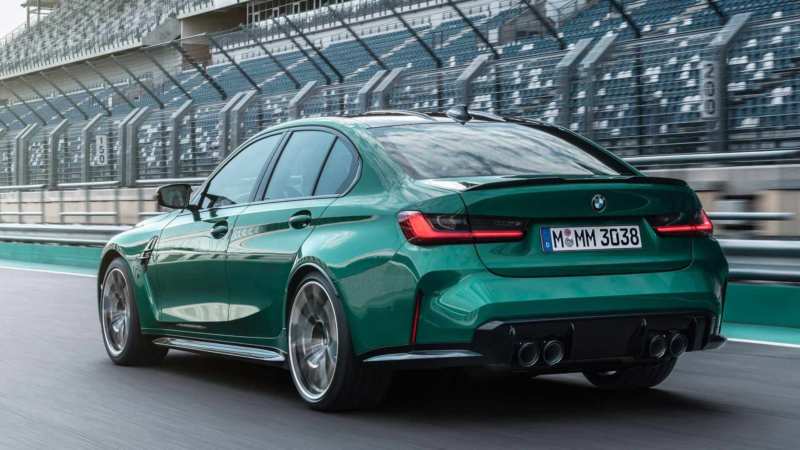 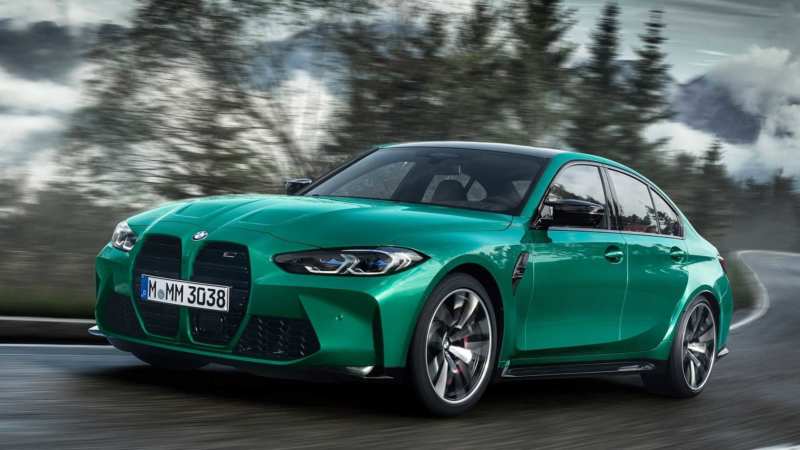 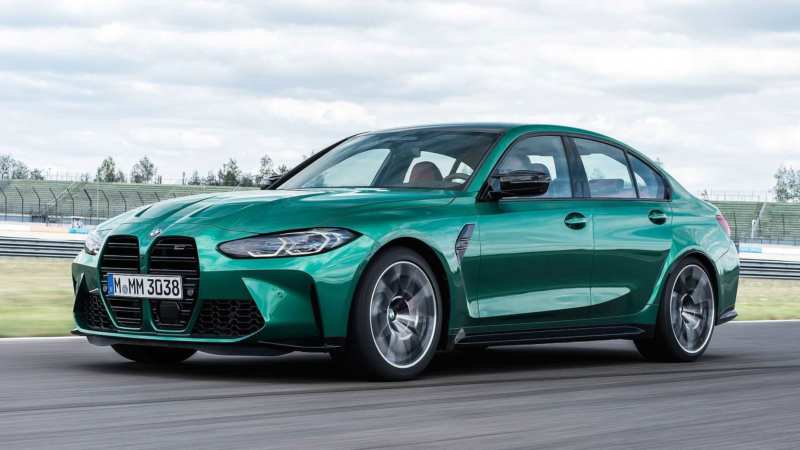 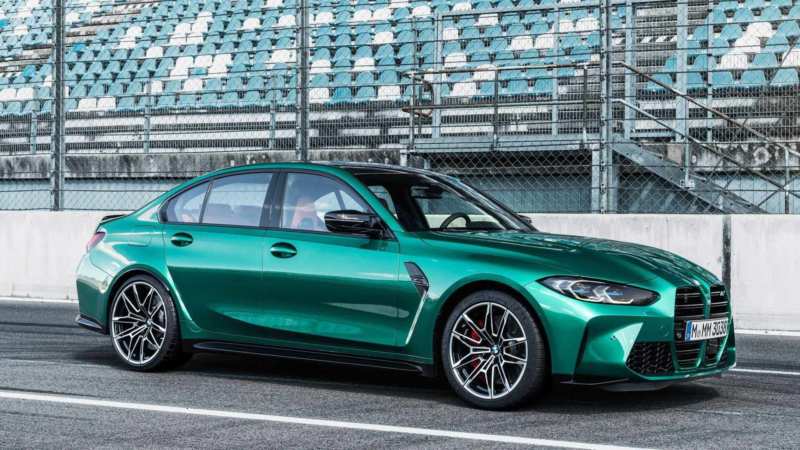 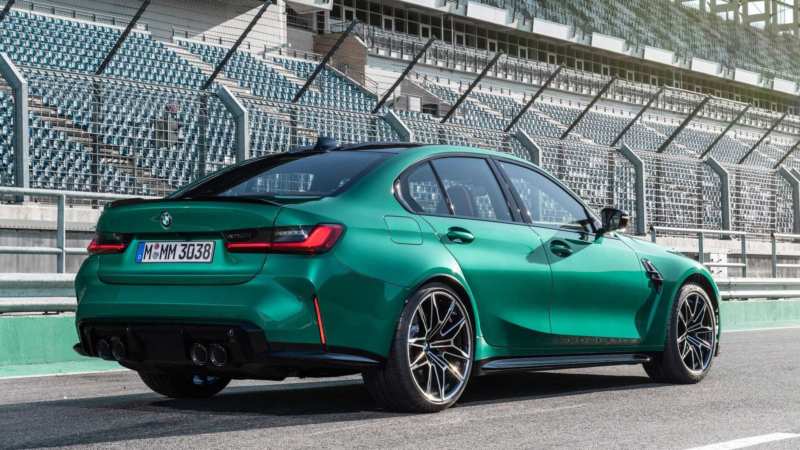 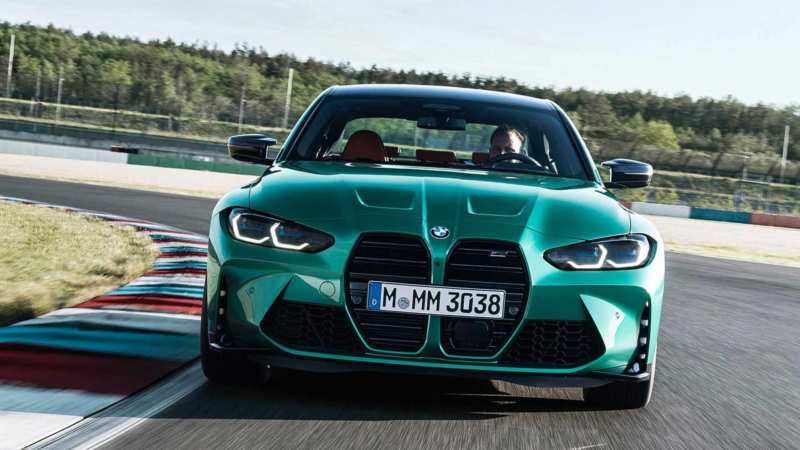 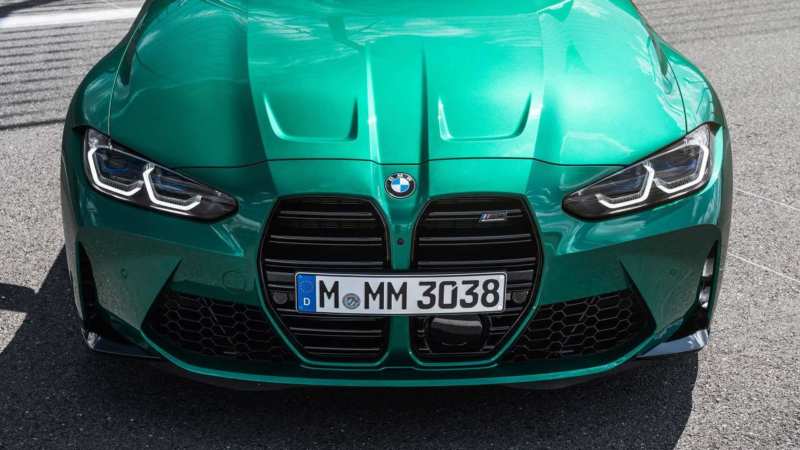