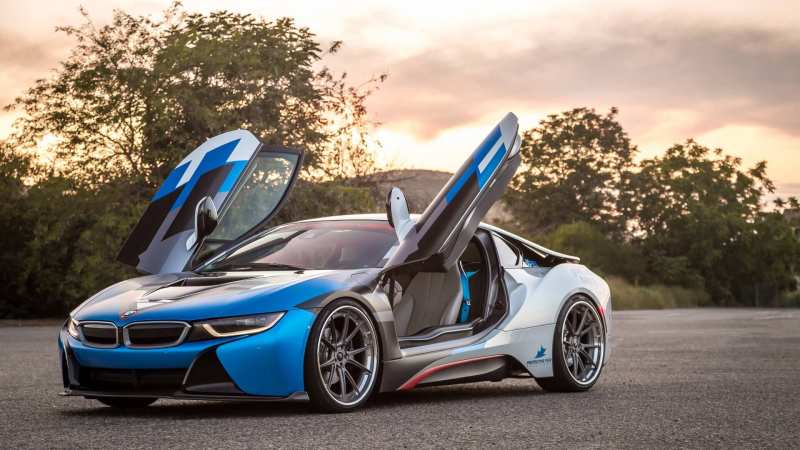 The most anticipated BMW i8 model was presented at the September 2013 trade fair in Frankfurt. In short, it received hybrid engines, one of which was a 1.5-litre 3-cylinder double turbocharged diesel engine with 231 hp and an electric motor that drives the front wheels and has 131 power. It was created in a record-breaking 3 years. The whole model range is BMW.

The new car BMW i8 Hybrid coupe 2015, presented in the photo, is not quite normal. The doors open upwards in the form of a seagull. The way the designers designed the appearance of the hybrid car simply amazes them with their bold and revolutionary ideas, which is very different from cars with a serial future.

The nose part of the sports car can be distinguished by the “nostrils” of the radiator grille, which, for obvious reasons, is fake. False, because under the hood on the standard place of the internal combustion engine is an electric motor, which does not cause overheating. The front lighting is completely LED and made in a futuristic style. 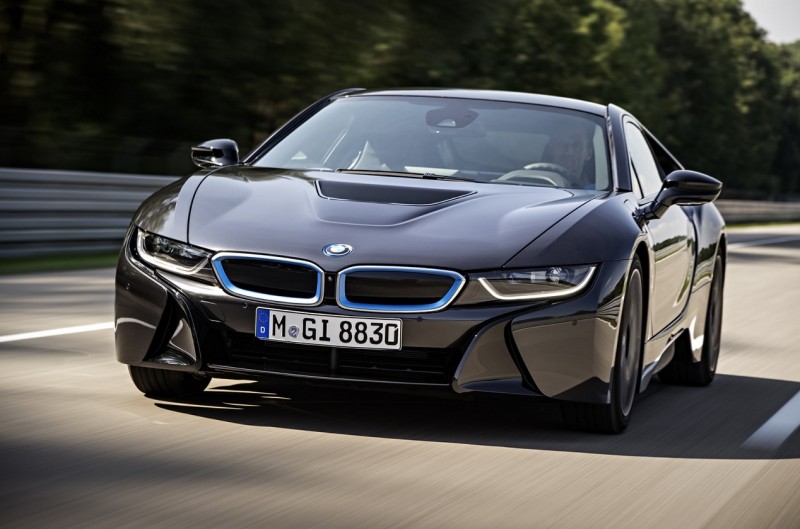 Located at the front, the bumper has the same interesting look that smoothly and stylishly complements the smooth front hood plane with integrated aerodynamic details. In addition, there are unique drops of rear-view mirrors on the rather interesting legs – all in harmony fits into a slightly strange appearance of a sports car.

The BMW i8 Hybrid Coupé 2015 also surprises with its artistic solutions. Everything is thought out so precisely that one detail contributes to the correct redistribution of air flow, as for the fruitful cooling of the engine and increase the downforce. 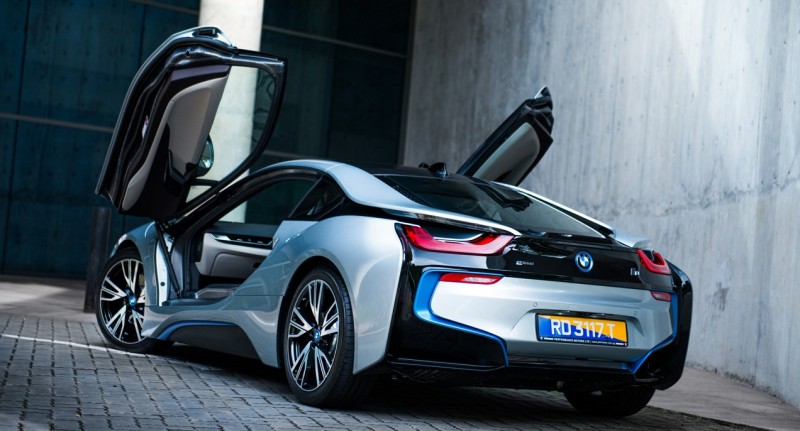 These same parts give the stern of the machine an extraordinary appearance. Throughout the rear part of the Bavarian production, there is a large bumper with a built-in diffuser and a unique insert. As for the light amplifying equipment, it is rich in LED performance and clearly distinguishes on the ledges of the groove for aerodynamics.

The whole picture ends with huge boomerangs, which seem to flow down from the roof. Such a shape of the body, with its spoilers, and other additions allowed the engineering staff of the BMW to reduce to a minimum value of the coefficient of air resistance – it is equal to 0.26 Cx. 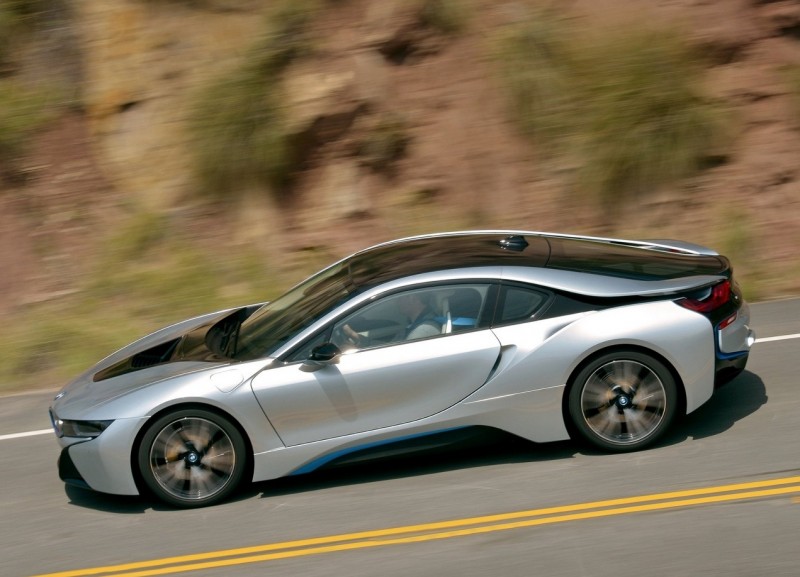 The lounge itself has a seating capacity of 4 passengers, but with full comfort it will be possible to sit only in front. Behind the front seats there is room only for children or bags. Speaking of the interior, it is immediately obvious that it does not lag behind the appearance of the car.

Here you can see the filling of the space in a futuristic style with some variations of variable contour lighting, a complete electronic dashboard, a projection screen of the latest generation, a clearly designed front panel and very comfortable seats that are made by anatomical profile. 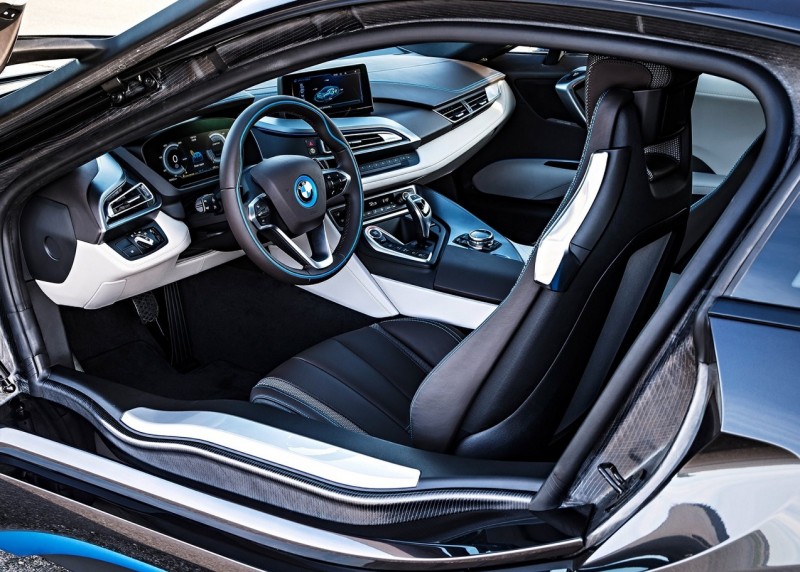 The saloon is made of polished carbon, and in some places with high strength organic glass and transparent plastic. Interestingly, the dashboard becomes tinted when the ignition is switched off. Some air deflectors fit around it and their walls are covered with chrome.

Everything looks very functional, comfortable and ergonomic. The backrests of the seats look thin, giving extra space to the rear passengers. What the BMW i8 Hybrid 2015 lacks is a spacious luggage compartment. The German offers only 154 litres. In addition, the temperature in it is very high, because there is a power unit nearby.

The BMW i8 Hybrid Coupe 2015 is powered by a hybrid unit comprising a 1.5-litre 3-cylinder turbocharged engine with 231 horsepower and an electric motor, 131 horsepower, a pair of transmissions and several lithium-ion batteries located in the middle of the floor, which gives the engineering staff the opportunity to achieve a unique vehicle axle balance.

The total output is 362 hp. The first 100 km of karting takes 4.4 seconds and the speed limit is limited to 250 km/h. Diesel works with 6-speed automatic transmission, and electric motor with dual-band transmission. The average flow rate is 2.5 liters per hundred. 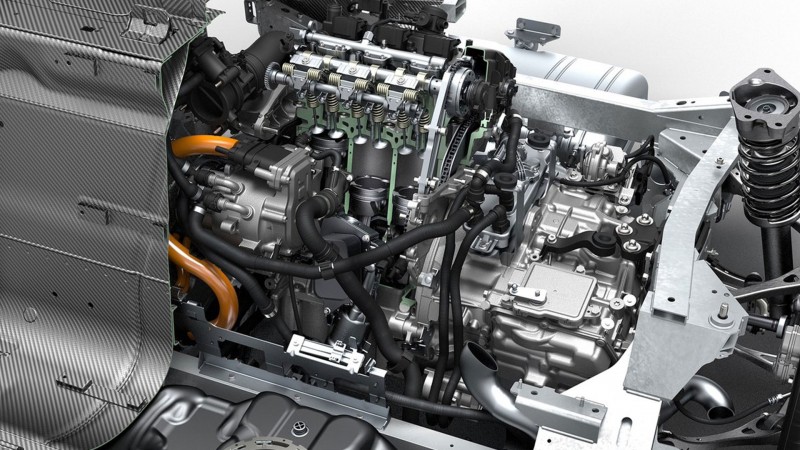 The electric motor is able to transmit the traction to the front wheels by means of a 2-speed automatic transmission. Batteries were used from Samsung, which were equipped with their own cooling fluid. Only on the electric motor, BMW can travel a distance of 25 – 35 km. Autonomy depends on road conditions, temperature, and speed.

An electric motor will be enough to reach a speed limit of 120 km/h. You can charge batteries up to 80% in just a couple of hours, which is possible thanks to the iWallbox and charging from a fixed socket takes one hour more than your time (about 3 hours).

The internal combustion engine transmits the torque to the rear wheels. It should be noted that in addition to the power unit, operating on liquid fuel has got a motor-generator, the power of which is equal to 11 kW. It is necessary for charging the batteries and for lightning catching up during the “turbo” which is unavoidable at high pressure.

The hybrid suspension is completely independent with adaptive electric shock absorbers Dynamic Damper Control, with a 2-lever front and 5-lever rear suspension. Almost all of the suspension parts were made of aluminum, which helped to reduce the weight of the supercar.

The braking system on the hybrid machine is only a disc braking system, with perforated brakes in front and ventilated at the back. The steering unit has a rack and pinion mechanism, which complements the electric amplifier. Such characteristics of the technical equipment of the sports car can surprise not only ordinary car enthusiasts, but also people who work directly in the field of automotive technology.

In the Russian Federation, the BMW i8 modification is equipped with light alloy discs, a 20-inch optical LED system, six AirBags, a leather interior, dynamic cruise control, a projection screen, and a full arsenal of electrical security services.

In addition, there is a multimedia entertainment complex, which includes HiFi Harman Kardon speaker system, which includes eleven speakers. Laser headlamps that “shoot” at 600 m can be installed as an option. It is expected that you will be able to buy such a car only in 2 dealerships located in Moscow and St. Petersburg. This work of art and engineering skills is estimated at about $ 147583 for the all-wheel drive BMW i8 Hybrid coupe 2015. 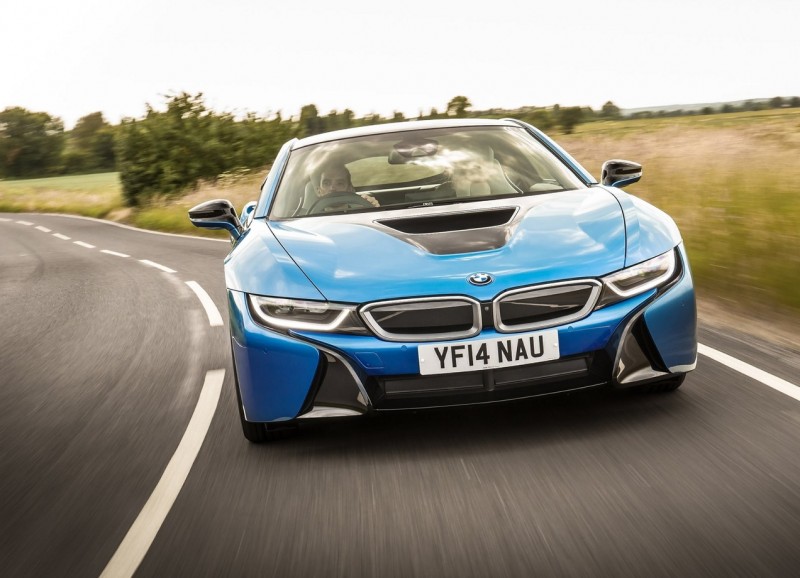 The BMW i8 Hybrid coupe 2015 is a truly amazing sports hybrid car that simply amazes with its appearance and exquisite interior. In spite of “modest power plants”, the car is very sharp and fast. The sports car is executed on the last word of technologies. Its minimal consumption and CO2 emissions, as well as a record resistance coefficient allow it to be a leader in its category. 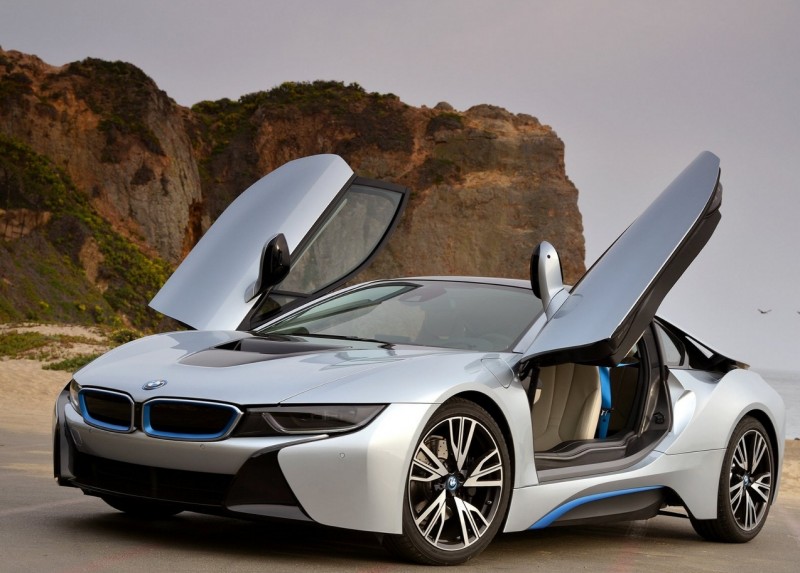 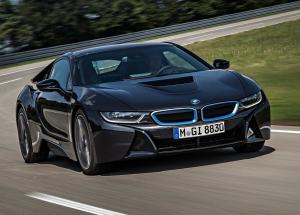 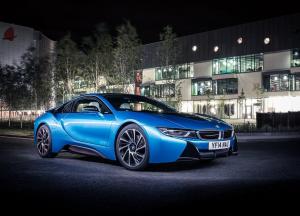 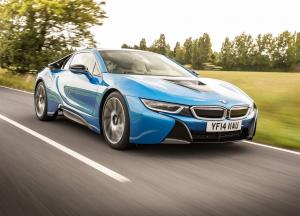 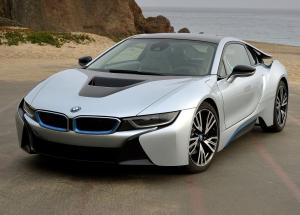 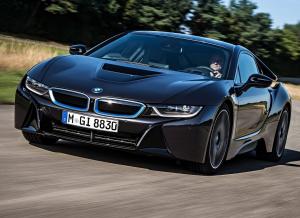 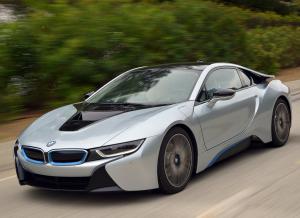 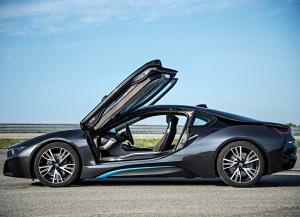 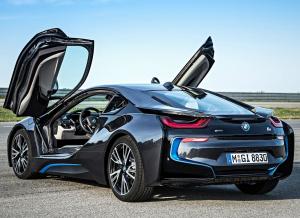 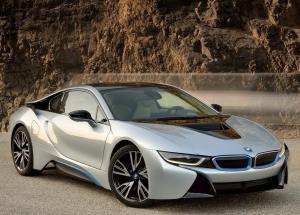