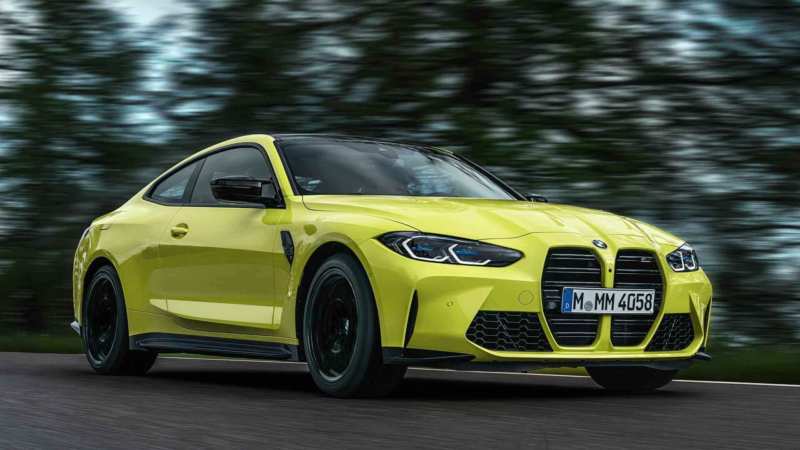 The BMW M4 is a rear- or all-wheel-drive premium coupe (D-niche in the European classification). The automobile manufacturer itself claims that the car incorporates “the genes of a sporty, everyday car, and all this in a very emotional overall concept. Primarily Bavarians are focused on well-to-do people who lead an active lifestyle and who appreciate “driving” characteristics of a vehicle. The new BMW M4 Competition G82 was introduced during an online presentation on September 23, 2020. The whole model range is BMW.

The appearance of the new Bavarian brand became known even before the official presentation. At first the spies managed to shoot how exactly the new car will look, and then the company itself posted official photos. The exterior of the “hot” BMW M4 2021 has changed significantly if compared with civilian versions of the 3 and 4-Series.

With the BMW M4 Competition F82 taken over some aerodynamic elements and details, which thanks to its special form not only beneficially affect acceleration dynamics, but also give the two-door coupe features of athleticism and smartness. The 2020 coupe has full LED headlights with slightly tinted taillights. But as an additional option, you can install adaptive units equipped with laser elements. 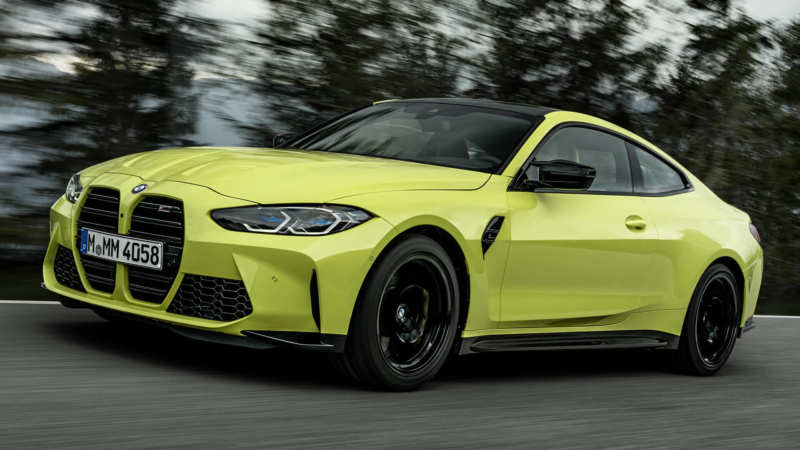 As a separate option, an optional M Carbon package can be fitted for the BMW M4 Competition bodied G82.

The front end features a new style of grille, which is devoid of frames and also bloated in height, as on some updated versions of the BMW. Some people like it, while others are seriously annoyed. However, in any case, you have to accept that this variant will be only in this form, at least for now. The optics and the hood have been changed. The hood can now boast a special chamfered shape, which adds a unique expressiveness to the car. The bumper, as it should be a sport variant, has a more elegant look, which corresponds to the spirit of the M-series.

Even if you take a quick look at the 2020 BMW M4 Performance, it is clear that this is a charged car. The sports coupe is backed by forged 19-inch front and 20-inch rear Double-spoke 826 M wheels with a great design, as well as Michelin branded tires. On top of that, they boast a polished rim designed to make them more visible. 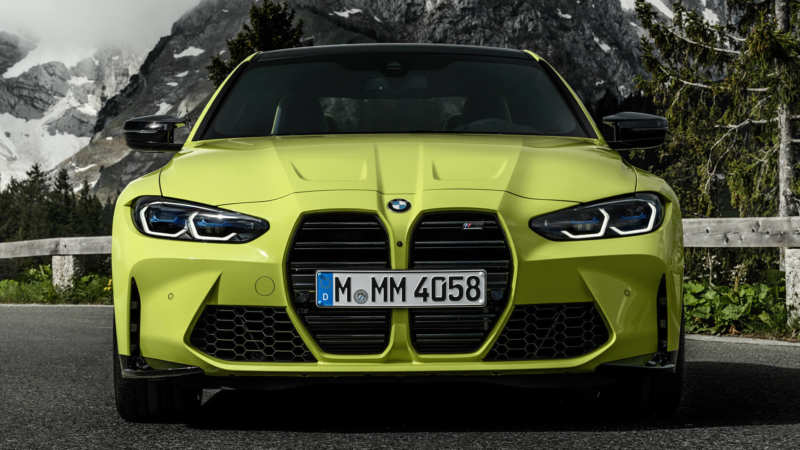 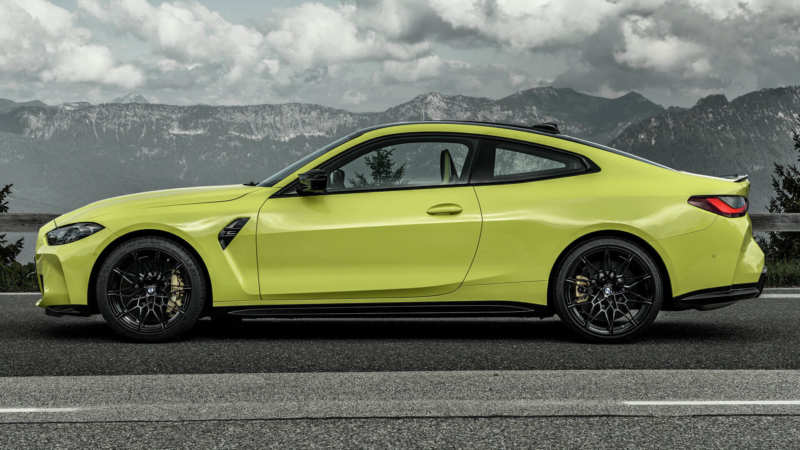 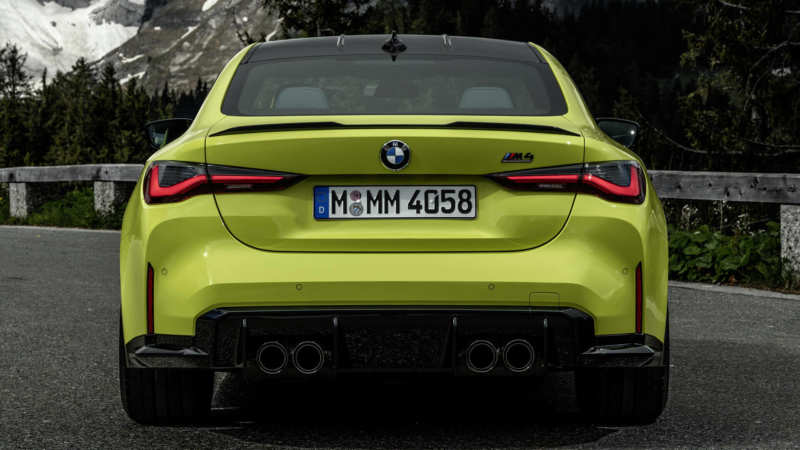 The new face of the sports coupe shows that it is a real predator, able to show how dynamic the new models are. The roof is equipped with aerodynamic ribs made of carbon fiber. And the rear part, judging by the photos of BMW M4 Competition has four nozzles of the exhaust system. As expected, outside the charged coupe was made in the style of the previously shown “basic” version of the BMW 4-Series Coupe (G22). The height of ground clearance, as expected for a sports coupe, was 120 millimeters.

The interior does not differ much from the civilian version of the four. The cabin has a 12.3-inch digital dashboard, which stands out for its informativeness as well as good readability. In front of it the driver welcomes a new sporty three-spoke steering wheel, which has multifunction buttons and a red button to start the engine.

Also did not forget to install paddle paddles, as well as two red buttons responsible for individual technical settings of the car. If we talk about the front panel and the center console of the sports coupe, they stand out in polished aluminum. But as a separate option, you can equip your model with carbon décor. On the central part of the interior of the BMW M4 Performance 2021 there is a 10.25-inch multimedia system, which has wireless support for Android Auto and Apple CarPlay interfaces. 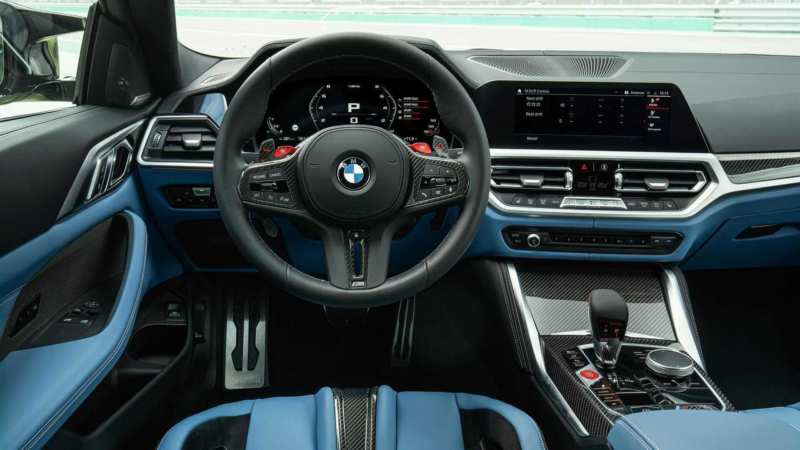 In addition, there is access to cloud services (e.g. BMW Maps). In addition, there are several driver’s assistants M Driver Analyzer and M Laptimer. Inside the new model has a beautiful and presentable design, impeccable ergonomics and only premium materials. For those who like to listen to music, there is a time-tested Harman/Kardon music system.

The 2020 novelty has the iDrive 7.0 system, which should better organize the control of the car.

In addition to this, the new model is equipped with special sports seats, which in the M Special version are also covered with high-quality Merino leather. Unusually, only with the release of the BMW M4 2021, the seats have a function of ventilation. Optionally, the coupe can still be equipped with M Carbon seats. They weigh 9.5 kg less than the factory seats and boast more developed side bolsters and a backlit logo. 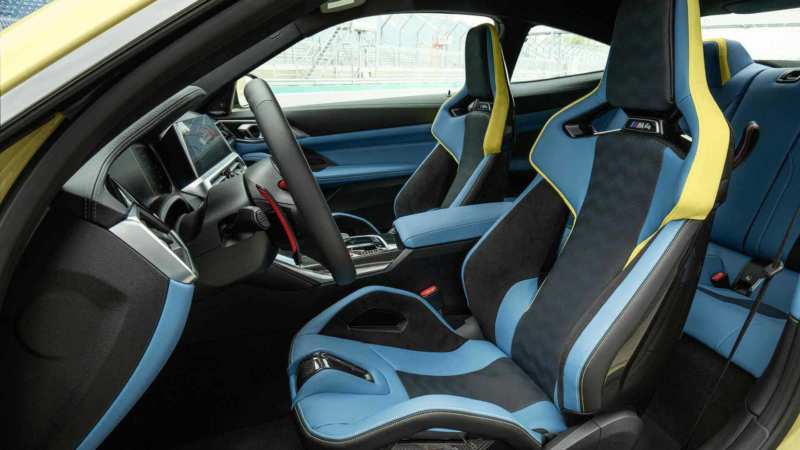 Bavarian engineers have provided for the boarding scheme “2+2”, so you should not count on an abundance of comfort in the rear row. Only children can be more or less seated there. However, in spite of the sports identity, the interior of the BMW M4 Competition has a roomy luggage compartment with 440 liters of usable space.

According to the company, their car takes 3.8 seconds to hit the first hundred, and the top speed is 250 kilometers per hour (electronic limit). However, with the installation of a special M Driver’s Package, the “maximum speed” rises to 290 kilometers per hour. As you can see, the characteristics of the BMW M4 Competition allow the car to be sporty not only on paper. 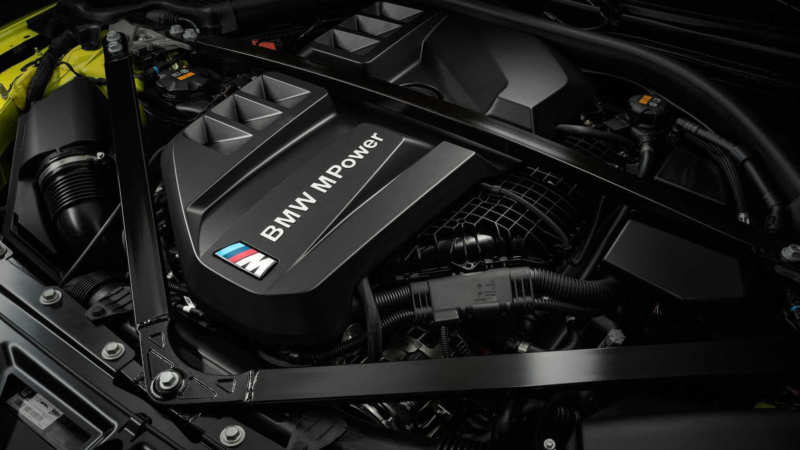 For such a powerful engine, the Bavarian company has provided only an 8-band automatic gearbox, which has a manual mode with the ability to shift speeds using paddle paddles. The top version also provides an additional option in the form of the M xDrive all-wheel drive system with an Active M rear differential.

In general, such system transmits torque to rear wheels, and can switch on front wheels only if necessary. The system itself has three modes: 2WD, 4WD and 4WD Sport. Interestingly, the last mode transmits more torque exactly to the rear wheels, which provides more driving control.

The car behaves perfectly on the road thanks to the Adaptive M type suspension, which has electronically controlled shock absorbers. The BMW M4 Performance 2021 sports coupe is also driven perfectly with the help of the steering. Engineers have fixed the rear subframe to the body bypassing the elastic elements, which improves control accuracy.

Representatives of the company say they have strengthened the body structure of the new items with a large number of struts under the hood and under the bottom. Moreover, for the sports version, specialists have created front and rear subframes, distinguished by improved rigidity. 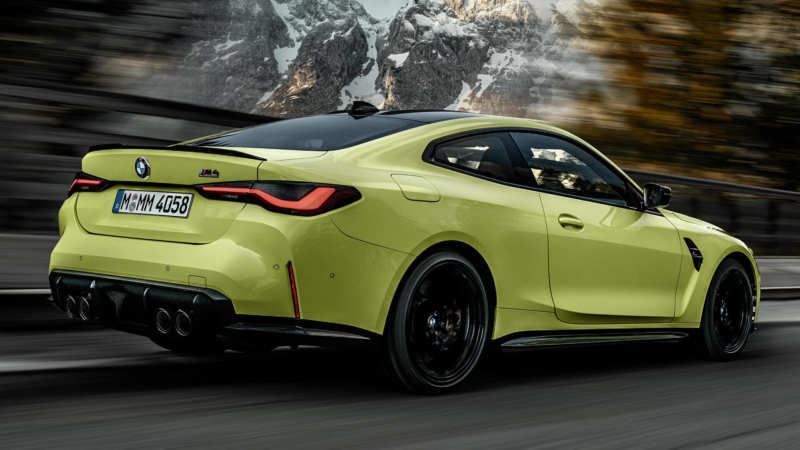 The car has enough rivals in this niche. They still gathered with the last generation, so the struggle will be serious. Each model has its pros and cons, it is necessary for everyone to decide personally, based on personal preferences. Mercedes-Benz C 63 AMG, Audi RS5, Infinity Q60, Cadillac CTS-V, Lexus RC, Jaguar F-Type can compete with BMW M4 Competition.

So, we can safely say that the fall of 2020 allowed the Bavarian company to present a new generation of powerful sports coupe BMW M4 Competition, which certainly will not leave anyone indifferent. The novelty has a controversial front end with massive “nostrils”, but Germans managed to compensate this to some extent thanks to a massive and bold hood, as well as stylish dodger. The light-emitting diode optics (and it is possible to install laser optics if you pay extra).

Bavarians aspire to constantly occupy leading positions among sports cars of a luxury class. Therefore, they have high hopes for the new model, which has become more powerful, sporty and more modern. BMW M4 Competition 2021 has a large number of electronic systems and assistants, excellent safety, as well as confident stability on the road, as well as excellent dynamic performance. Additionally, it is possible to install various packages and nice options. Those who like fast driving will appreciate this coupe. 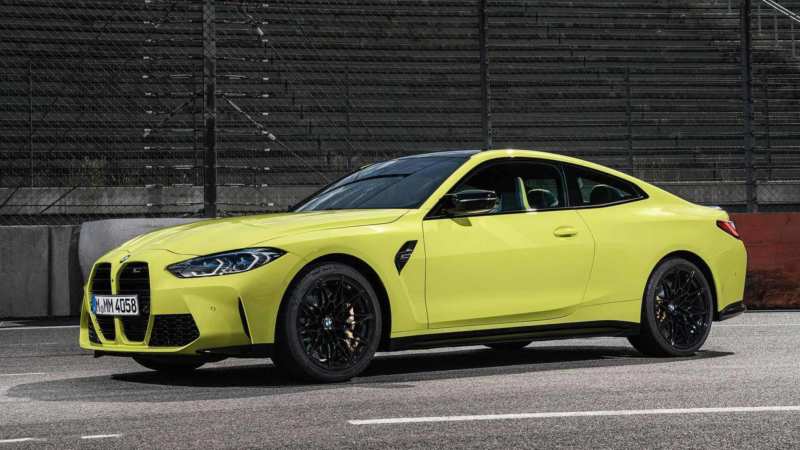 We advise you to read the article: History of BMW 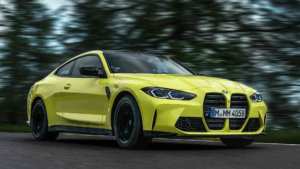 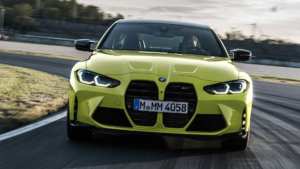 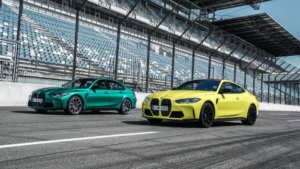 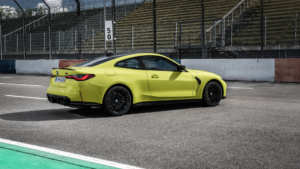 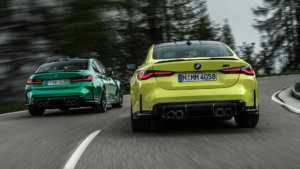 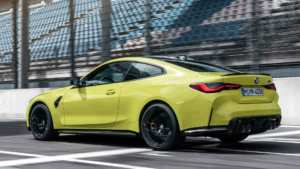 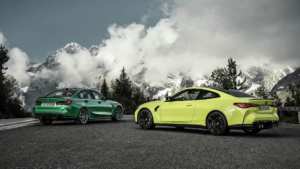 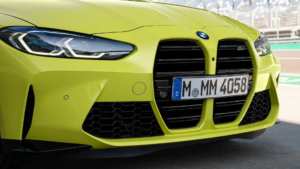 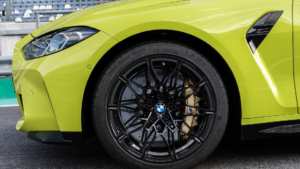