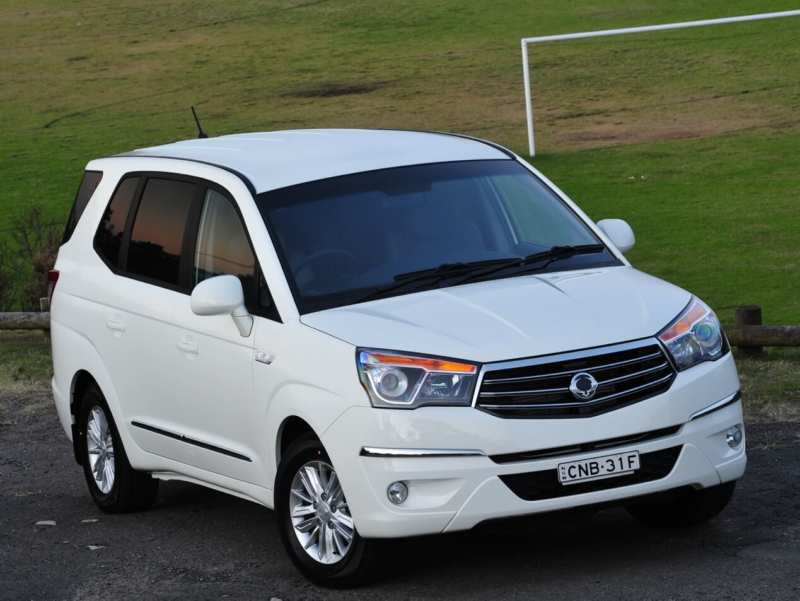 SsangYong Stavic is a spacious car for comfortable trips with family or friends. The minivan started back in 2004. Presented to the public, the new Stavik was at the 2013 Geneva Motor Show. On the official website of the dealer of the Korean company it is said that such a car is classified as an SUV. However, in fact, from the external point of view, it is more like a family minivan as for example Fiat Doblo. The whole model range is SsangYong.

The stavik has his predecessor – Rodius, which is not so often found on Russian roads, because his design solution was not very good for the drivers. However, the updated Sang Yong Stavik has turned out to be with a completely redesigned appearance, which almost does not resemble the previous model.

There is a bit similar only on the aft part of the car, and the fact that both cars have large dimensions. The nose part of the SsangYong Stavic was made in a fairly fresh appearance. If we take previous versions, the restyled version of the appearance of the car actually has an unusual and quite good design. 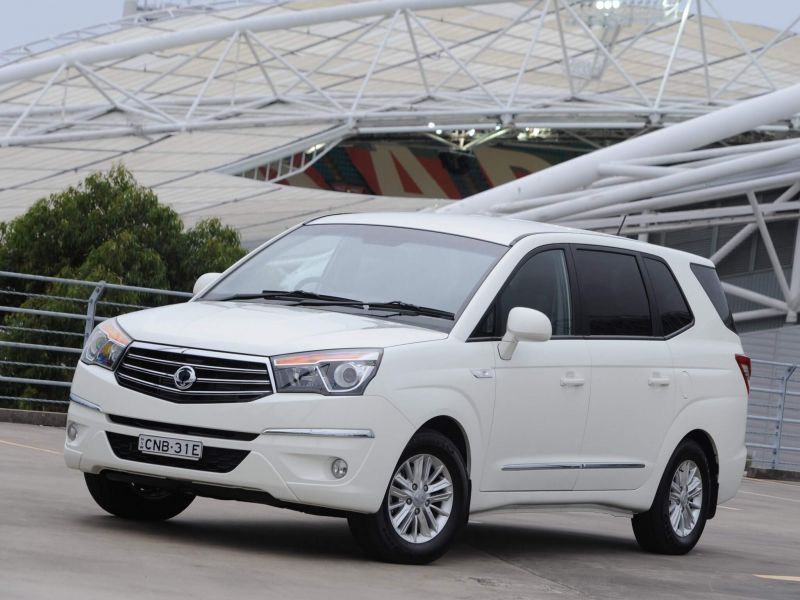 As a result, the only thing that can scare away is the name of SangYoung. This may seem strange, but the sound of this word is a little worrying, because for most people, it is very important not only what kind of car, but also what brand. The headlamps installed in front look quite solid, massive and purposeful. Together with the grille, they provide the car with aggressiveness.

It would not be superfluous to remind that among the automobile market of family minivans, such a design solution is quite rare. Unfortunately, the side part does not have big wheels, which makes it impossible to call SsangYong Stavic a full-fledged off-road car. For example, if we take for comparison the latest modification Audi Q 7, then for its large body there are not less massive wheels with a unique design of wheels. At the Stavik this is definitely missing. 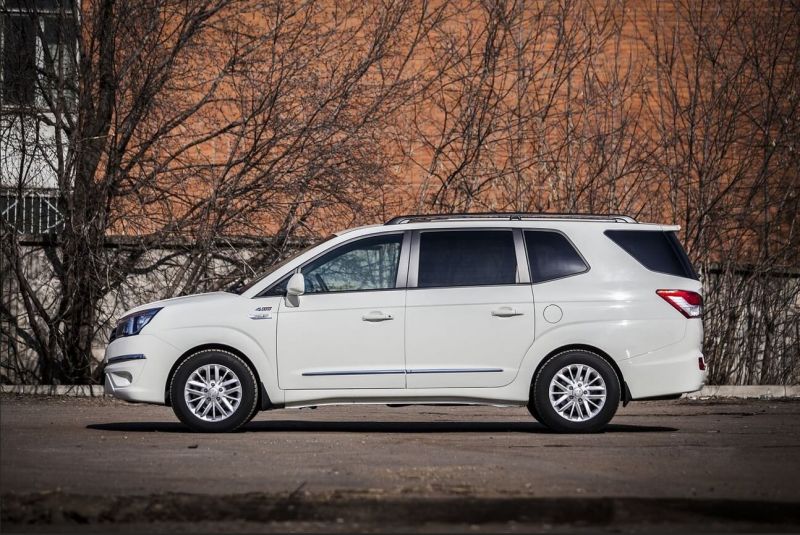 Very interesting people react to the side of the car, everything is ambiguous. Despite the small wheels, as mentioned above, there are powerful arches in the arches of the wheels, which look quite appropriate and worthy. In addition, such a ratio of body size and chassis is very characteristic.

The stern of the SUV looks very massive. From the visual point of view, there is a feeling as if there is an imbalance. On appearance, the car has received confident 4. The car is worthy, but not stunning. There is an angularity at transition of a door plane of a luggage compartment in a line of a roof, and the door looks heavy enough.

The small dimensions of the rear bumper are concealed by the built-in towbar, which was not installed with much confidence, and the lights that overlook the rear fenders can be easily confused with similar parts of most cars that wear Korean and Chinese labels.

As mentioned above, SsangYong Stavic minivan is famous for its huge interior, which accommodates 4-row seats. The salon became even more spacious and functional. The designers faced the task to make the interior comfortable and capable of transformation. The car seats are mounted on special laths, which can allow you to adjust them to your taste.

The driver’s seat itself has automatic adjustment, and the passenger seats can be adjusted manually, mechanically. The steering wheel is adjusted only vertically, but it is slightly protruded forward from the factory. As for the dashboard itself, it is quite simple and ergonomic. 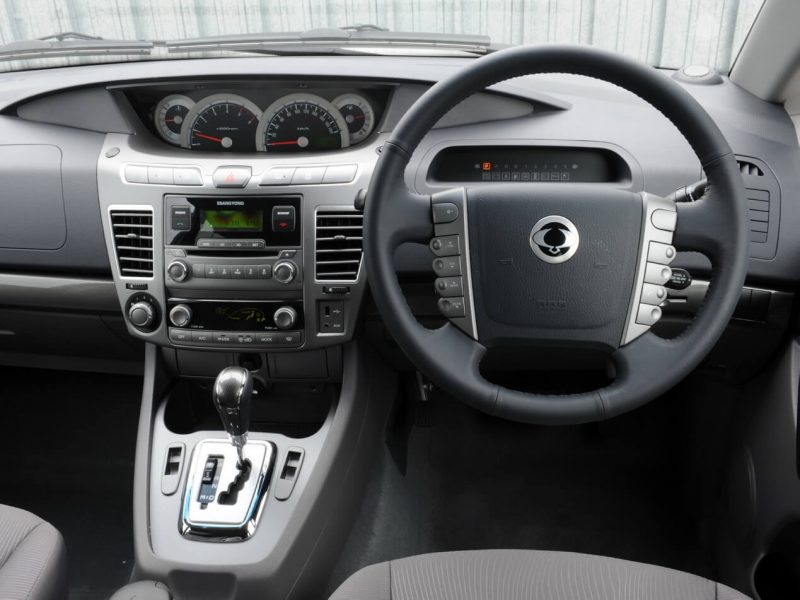 There is a small shield behind the wheel with a speedometer repeater, and in the top version there is a touchscreen display of the multimedia system. It is clear that there is nothing luxurious and chic, but the interior does not look boring in a spartan way. Being on the second row, it is possible to feel sometimes a slight discomfort, after all the places for feet not so much that it is impossible to tell for the third row.

The 2nd person will feel quite comfortable there, though there is a place for the 3rd person as well. On any row there are different cup holders and departments for different things. SsangYong Stavic minivan has a 2-zone air conditioning system. Luggage compartment has 400 liters, and with folded rear seats as much as 3,240 liters.

Under the hood of the updated SsangYong Stavic minivan is a 2.0 liter turbo diesel engine, capable of producing 149 horsepower and synchronized with a 6-speed manual transmission or 5-range automatic transmission, which was borrowed from Mercedes-Benz.

Fuel consumption is about 8 liters per 100 kilometers, given that the tank is designed for 80 liters. Although it is not specified how much the SsangYong Stavic reaches the 100 km/h mark, it is not difficult to guess that with a weight of 2,750 kg, it will not be very fast. The pair can be a 2.0-liter engine with a reinforced 3.2-liter gasoline engine that produces 220 horses. The maximum equipment has a four-wheel drive. 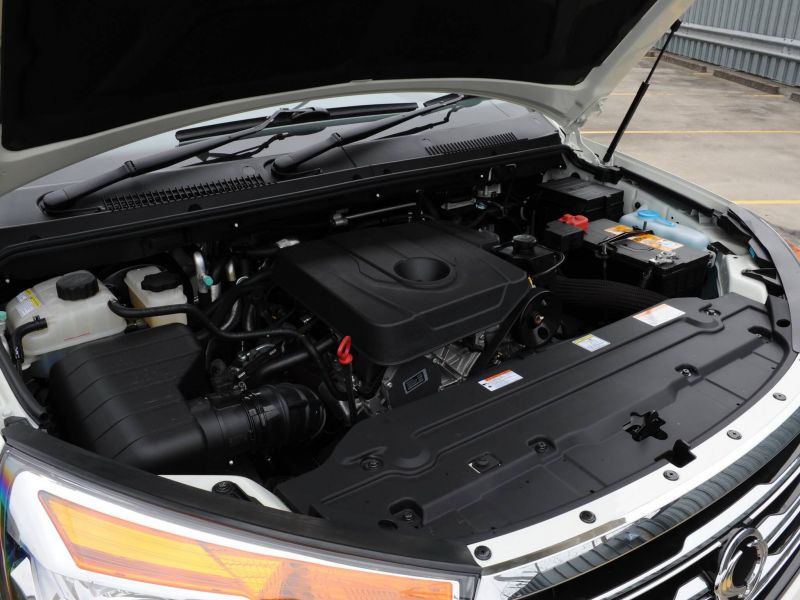 If you take off-road, the car doesn’t look very confident. The wheelbase is very long, the ground clearance is sometimes just not enough. Not a weak powertrain and a long aft bodywork can prevent the bumpy ride.

I can draw the following conclusion: SsangYong Stavic will be useful for family trips, trips to rest on easy off-road roads.

The suspension is independent, spring-mounted, with McPherson at the front and an independent multilever system at the back. As a braking system, it is possible to install disc brakes. The basic set of electronic systems, which are designed to ensure comfort and safety, will have an ABS, EBD, ESP, BAS and active anti-rollover system (ARP).

This is not bad enough, given the car’s accessory and the way it is positioned (as an SUV). Also, do not forget about the quality of our roads, so SsangYong Stavic will be just right for those who like to relax in the countryside or in the countryside.

As a family-owned machine, Sang-Yong Stavik has been given considerable attention in terms of security. Even the basic Comfort package has an ABS system, a system of course stability, which has a system of prevention of tipping over, the purpose of which is to automatically monitor the speed and power of the engine, in the event that the driver has already lost control of the car.

Moreover, the vehicle is equipped with a brake force distribution system, which reduces the rear axle load when the brake is pressed abruptly, thus allowing for even better braking safety. It also included airbags, 3-point seatbelts for the driver and front passenger, and ISOFIX child seats as standard. The car was not badly adapted for operation on Russian roads.

Active safety services serve to prevent accidents that may occur on the road. The ESP Stability Service, together with the service that prevents tipping over, automatically reacts to the condition of the road and the position of the machine, controlling the strength of the powertrain and braking in case the driver may be on the verge of losing control of the control.

The presence of antilock braking system does not allow to block the wheels of the car during braking, which allows it to save stability during movement, and on the coverings with a small coefficient of grip reduces the braking distance of the car. The service, which knows how to distribute the braking forces has its own software extension of the anti-lock braking system.

If to tell a little differently, service uses constructive elements of service ABS in the newest quality. When the machine brakes abruptly, the rear axle load is lowered by the auxiliary, because the centre of gravity moves forward.

It is of paramount importance for the company to ensure the safety of all family members. This is why the machine has been designed in this way to ensure the utmost safety for the driver and passengers sitting next to each other in case of possible emergency situations.

A carefully designed safety system has been applied, where there are front and side airbags with a 2nd level of opening, height-adjustable 3-point safety belts with pretensioners, fastenings for ISOFIX child seats, which are strong and securely fasten the seats for babies.

Base complete set of minivan SsangYong Stavic Original has a diesel engine with mechanical gearbox. There are also EBD and ABS systems, air conditioning, front seat heating, front airbags, full electric package and audio preparation. Everything will cost about $23048,61. The more expensive version of the Stavik has ESP systems, roof rails and 17-inch light alloy wheels. Such equipment is estimated at $24162,44. 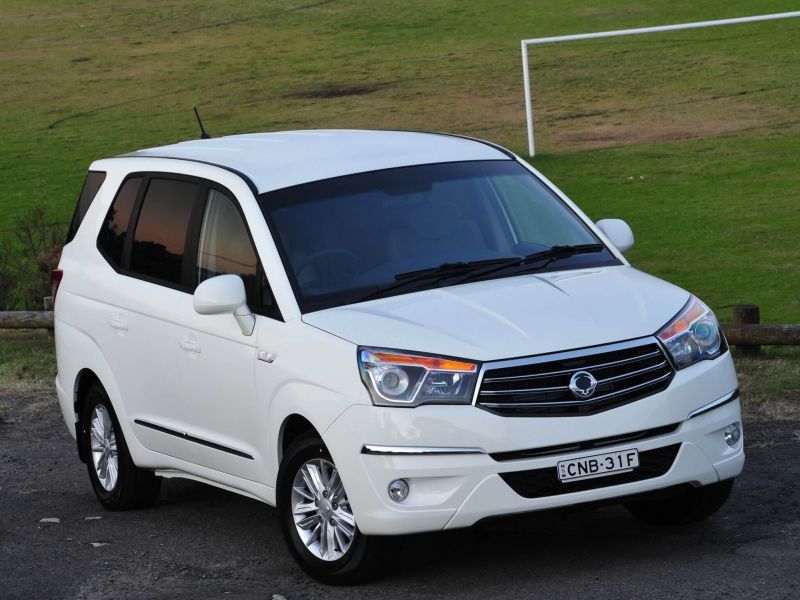 Complete set Elegance possesses presence of heating and leather furnish of a steering wheel, the climate control, parktronic, a rain sensor, mp3-audio system, with support of formats 2DIN and USB, and also the keys located on a steering wheel and an automatic gearbox. It will cost from $26515,94.

The top version of SsangYong Stavic costs from $29340,14. It includes a four-wheel drive, automatic gearbox, leather interior trim, electric driver’s seat drive and roof hatch. The price of a minivan SUV with a stronger gasoline engine and a volume of 3.2 liters will cost from $23535,00.

It is clear that SsangYong Stavic is still a long way off from the world’s leading SUVs, but it is a good attempt to create something of its own. The designers have managed to make an unusual car, which is not an outdated model, but meets all modern design and stylistics standards.

Looking at the nose of the car, it feels as if we are looking at the side and stern of the car as if it were a real family minivan. This is even noticeable on small wheels, which for unknown reasons decided to make them so. Everything in the salon is pretty good, which is very pleasing, there is no refinement, but there is no ascetic spirit, everything is in its place and intuitively clear. 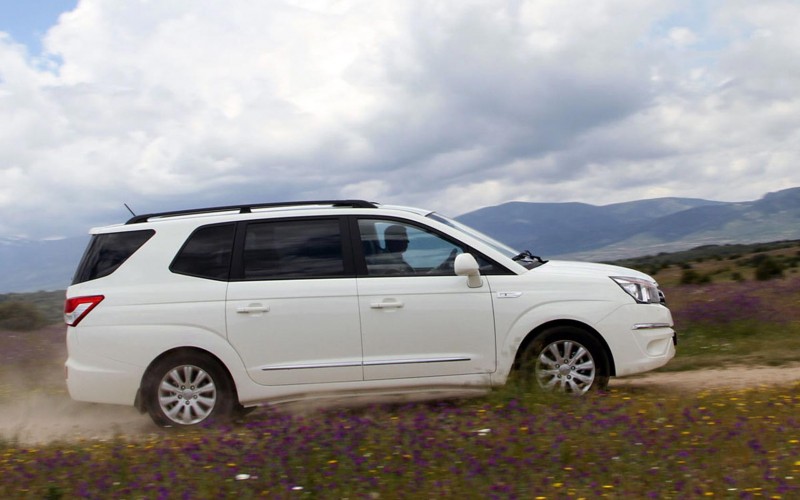 There’s plenty of room in the salon with a head. The luggage compartment is not record-breaking, but it has the necessary volume to take everything you need with you. And if necessary, you can even increase it, while adding backrests of the rear seats. Although the two-litre engine does not have a lot of power, it is not so voracious. But there is a variant with a 3.2-liter engine that runs on gasoline and is stronger.

The equipment is not record-breaking, but the company provides everything you need in the basic equipment. They have not forgotten about increasing the level of safety, as the car is also positioned as a family car. In general, the SsangYong Stavic is quite versatile. But, unfortunately, it cannot be called a full-fledged SUV, although more expensive modifications have even a four-wheel drive system and various systems designed to help the driver on the road.

We advise you to read the article: History of SsangYong 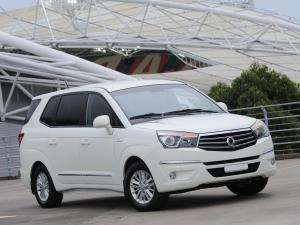 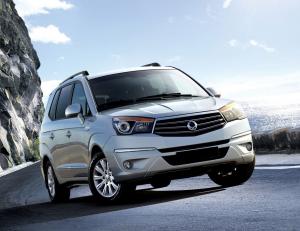 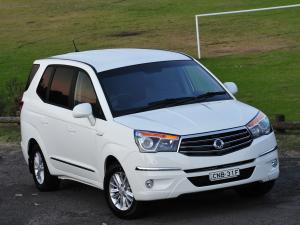 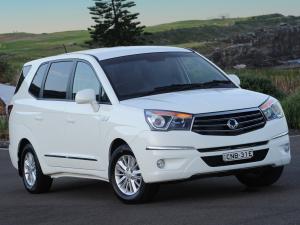 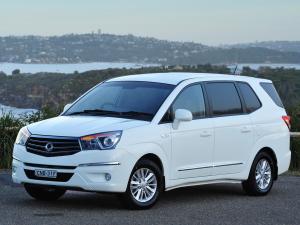 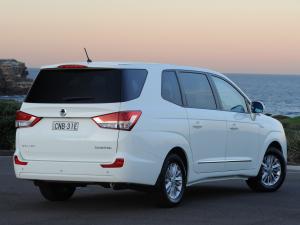 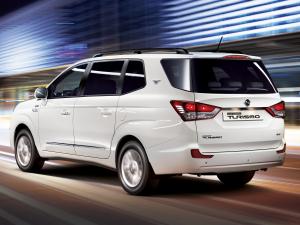 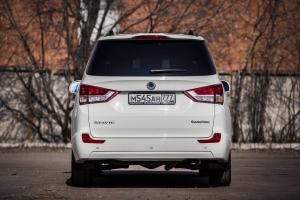 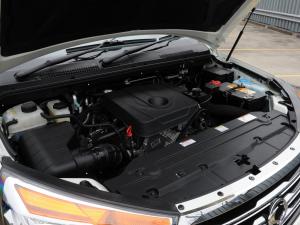