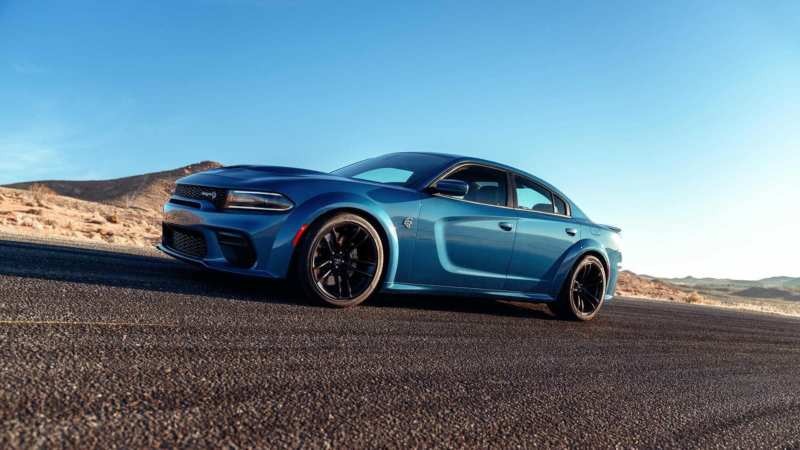 The Dodge Charger is an iconic vehicle manufactured by Dodge. Dodge itself is a part of the Chrysler Corporation. The first model appeared in 1966. However, a lot of time has passed, so the car was gradually updated.

Already the 6th generation of the car was retrained as a three-wheeler and made its debut in 2006. This generation also underwent several upgrades, which had a positive effect on the “American.” So in 2020, the American company showed the Dodge Charger SRT 2021 model year, which became better in many ways. The whole model range is Dodge.

The Dodge Charger is the iconic and only 4-door muscle car in America today. It is also the most powerful sedan in the world among the production vehicles and the closest relative of the 4-door model Chrysler 300C. Since the first generation, which was in 1966, the model has always been in relatively high demand (such as the 1969 Dodge Charger), so the next update the brand’s fans have been waiting for.

Of course, if we consider the sales volume, the Charger SRT is significantly inferior to its direct competitors – Ford Mustang, as well as
Chevrolet Camaro. However, the company’s management hopes that by expanding the list of modifications and new options, it will be possible to change the balance of power in this “struggle.”

It is necessary to give American engineers credit because, in the Dodge Charger SRT Hellcat model, they could make the already beautiful, sporty exterior of the basic version of the Dodge Charger even more brutal and distinctive. The sports sedan’s front boasts a new hood with several air intakes and an upgraded shape of the grille.

On it, you can see the traditional SRT Hellcat emblem, as well as two auxiliary air intakes. To improve aerodynamic characteristics, the engineers rounded the nose a little bit. The side part has a “pumped up” profile, substantial wheel arches, relief sidewalls, domed roof, sports skirts, and “Hellcat” badges placed behind the front arches. 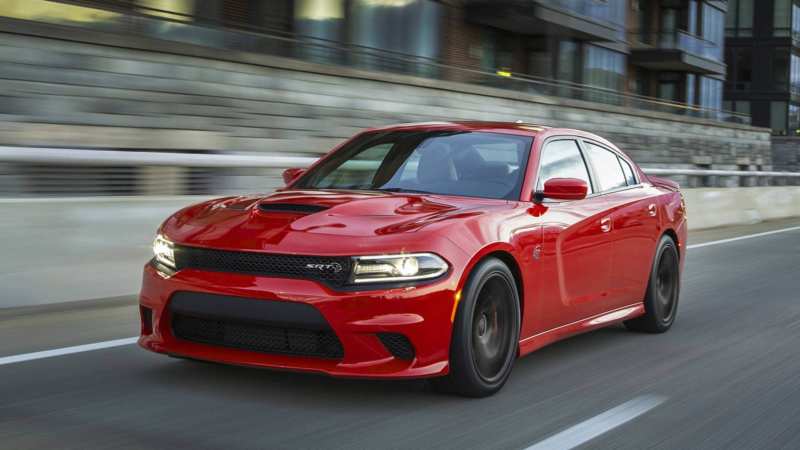 The American sports sedan is supported by extensive and beautiful 20-inch Brass Monkey forged wheels, which are shod in special low-profile Pirelli P-Zero (P-Zero Nero) rubber. This allows for maximum traction. Ground clearance height is 124 millimeters. The ground clearance is small, so the driver must be careful when driving on low-quality asphalt or bumps.

The rear almost wholly copies the stern of the standard Dodge Charger SRT. However, you can notice a slightly enlarged spoiler mounted on the trunk lid, eye-catching parking lights, as well as a majestic rear bumper. In addition to this, the Charger SRT Hellcat has a place for modified exhaust pipes, additional air ducts, and “nameplate” “SRT Hellcat” on the trunk lid. 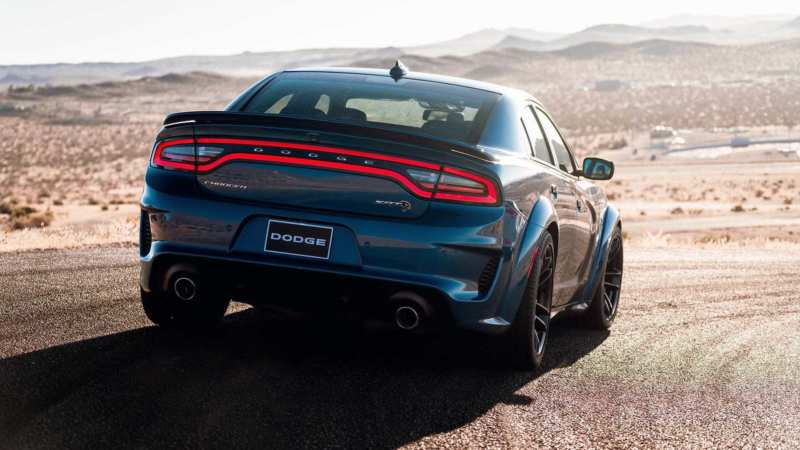 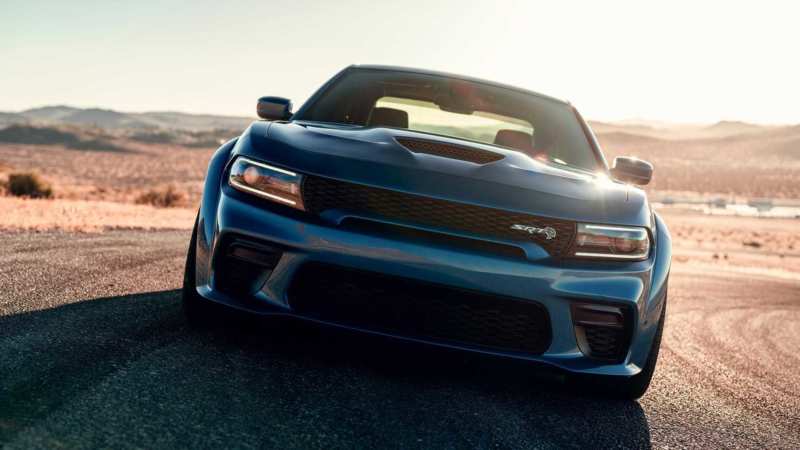 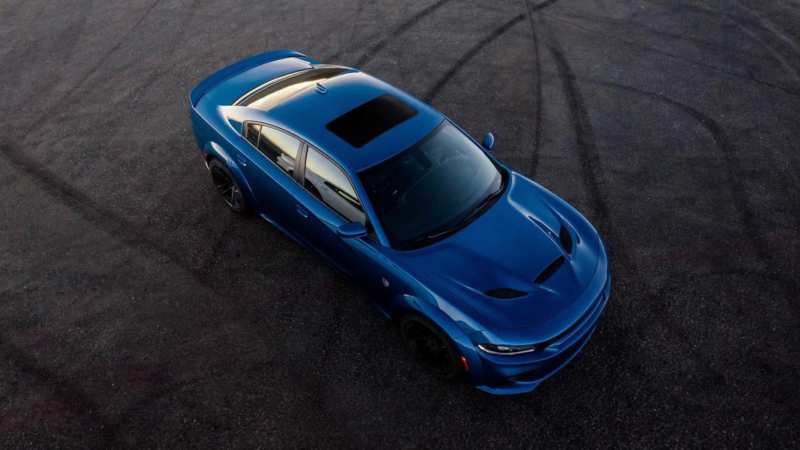 This American sports sedan’s interior is unlikely to find many original elements, but it turned out to be stylish, sporty, and rich.
Opposite the driver is a stylish 3-spoke multifunction steering wheel with a slightly cut lower rim and the inscription “SRT” in the center. Next comes the well-readable dashboard, which has a trip computer and two large analog dials.

Although the Dodge Charger SRT sedan can produce a lot of noise, it had no effect on the interior, where there is no unnecessary and annoying noise. 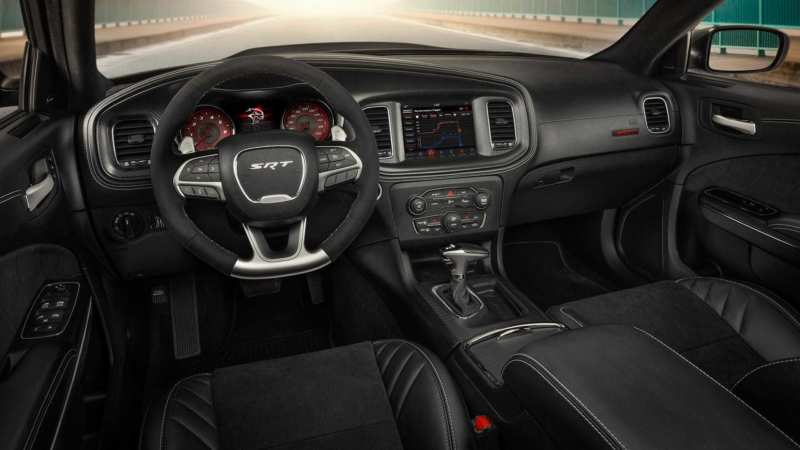 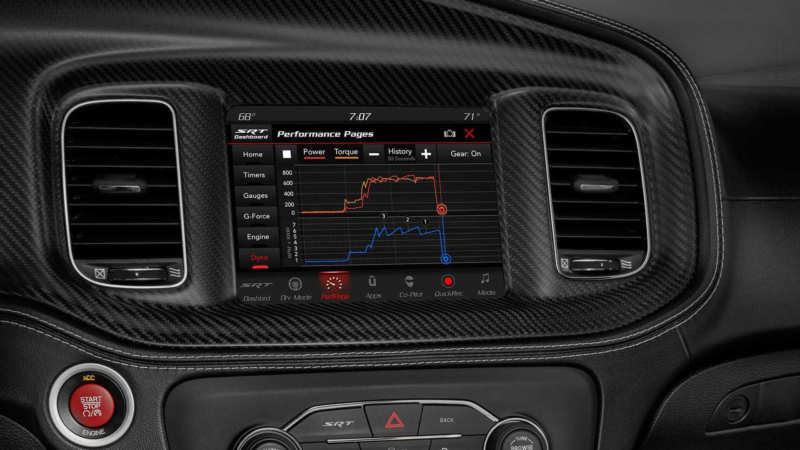 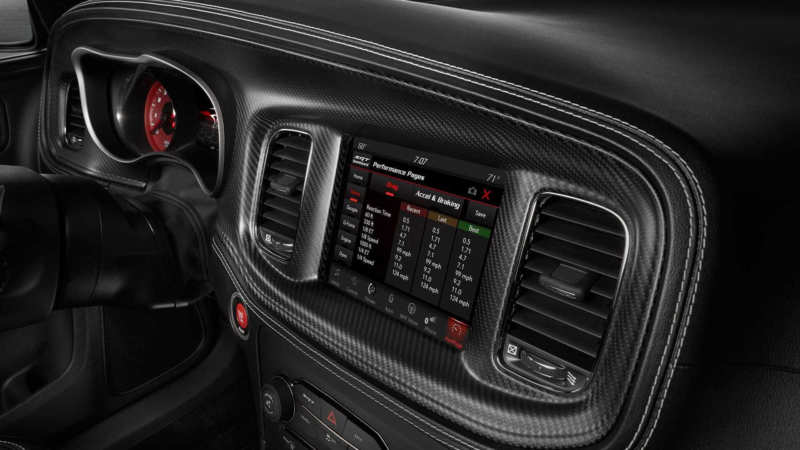 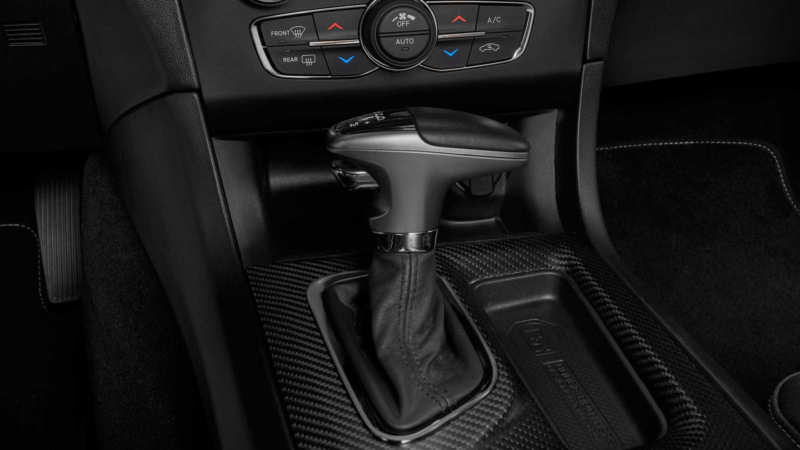 The center console boasts an 8.4-inch display of the Ucinnect multimedia- information system framed by vertical slots in the ventilation system’s air vents. Acoustic and climate controls can also be found here. The front boasts comfortable sport seats with high-quality side support, a sufficient number of adjustments, as well as upholstery made of a combination of Nappa leather and Alcantara.

A wide console was installed between the seats. It is equipped with a wide armrest, gear selector, and a compact box for various small items. There is a place for a comfortable sofa in the second row, which, although profiled for two passengers but can use even three people without problems. 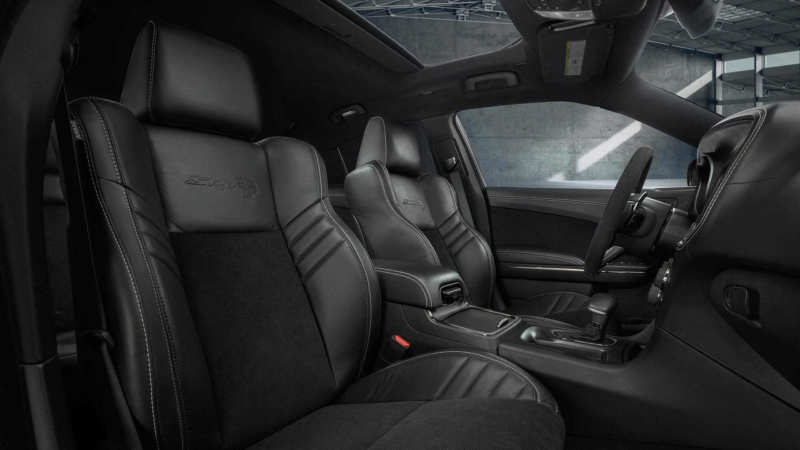 Despite the sports bias, the sedan has a good trunk, which can hold 467 liters of usable space. Interestingly, the luggage compartment also has a wide opening and a clever layout.

The charge American sedan’s hood boasts a high-performance 6.2-liter V-8 engine, which many are familiar with from another famous model – the Dodge Challenger SRT. It develops 717 horsepower (881 Nm). This allows the sedan to spend only 3.9 seconds to accelerate from a place to the first “hundred.” The manufacturer has declared a speed limit of 328 kilometers per hour. 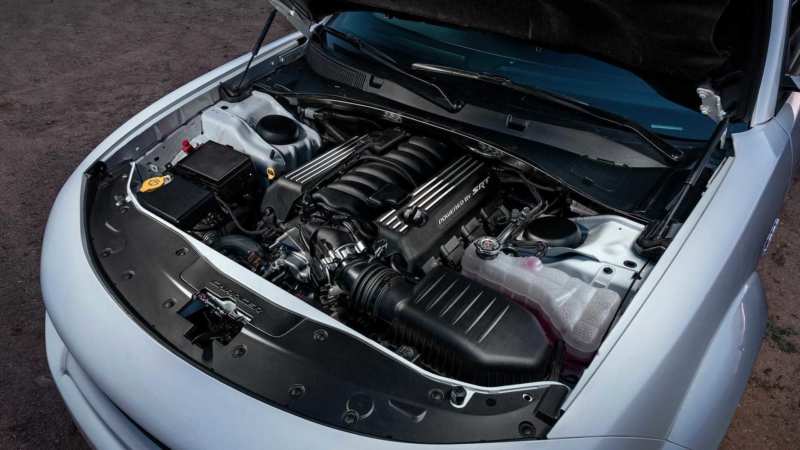 Fuel consumption of the Dodge Charger SRT Helkat is about 14.5 liters per 100 kilometers in the mixed model. Interestingly, this model will be equipped with the After-Run Chiller system, which allows cooling the power plant and compressor after the engine stops. Moreover, the car will get the

Torque Reserve system provides the sedan with “explosive” maximum traction directly at the moment of starting.

The company claims that the car can accelerate to 160 kilometers per hour and come to a complete stop in as little as 30 seconds.

For such a powerful “engine,” the American company decided to install a modern 8-speed automatic TorqueFlite 8HP90 gearbox, which has three modes of functioning and is supplemented by two paddle paddles. Those who like to “drive” will be pleasant news – the Americans did not reduce the “maximum speed” using an electronic collar. Therefore the model has excellent dynamic characteristics.

Like the base model Dodge Charger, the “hot” variant received an upgraded platform Chrysler LX, which can have independent suspension – double wishbone system in front and multilever design in the rear (there are transverse stabilizers and coil springs in the circle). The model has an adaptive suspension, which has five modes of operation.

The Custom mode, which allows the owner to customize the powertrain, gearbox, chassis, and other auxiliary systems, should be noted separately. It is easy to control the car with the help of electric power steering. The braking system has ventilated 6-piston disc mechanisms from Brembo (front discs have a diameter of 390 millimeters).

The car stops correctly. To better warm up the tires, the American company engineers have provided an innovative system for locking the front brakes, Line Lock. There are also electronic systems ABS, EBD, and other “helpers.”

The American model has another exciting feature: the owner has two ignition keys – black and red. If you use the first one, the engine power will not exceed 500 horsepower, and revs will not rise above 4 thousand rpm. In addition to all this, it will be impossible to switch gears with paddles. If you apply the red key, all these restrictions will be “removed.”

Despite the sporty bias of the Dodge Charger SRT Helkat, engineers have equipped the car with a large number of the latest assistants and technologies that are responsible for passenger safety. These include:

Moreover, the sedan body was made with the introduction of high-strength and ultralight steel. This had a positive effect on the vehicle’s total weight and increased the level of passive safety of the novelty.

The price of the Dodge Charger SRT in the United States starts at
$67,995. Basic equipment is quite extensive, so you can see its list on the website, which sells this car. There are also many options. Therefore, each motorist will be able to choose a car based on their preferences.

Special mention can be made of the premium 900-watt sound system from Harman Kardon, designed for 18 speakers, two key variants, and an abundance of electronic assistants. It’s a pity, but official sales for Russia are not yet foreseen shortly. 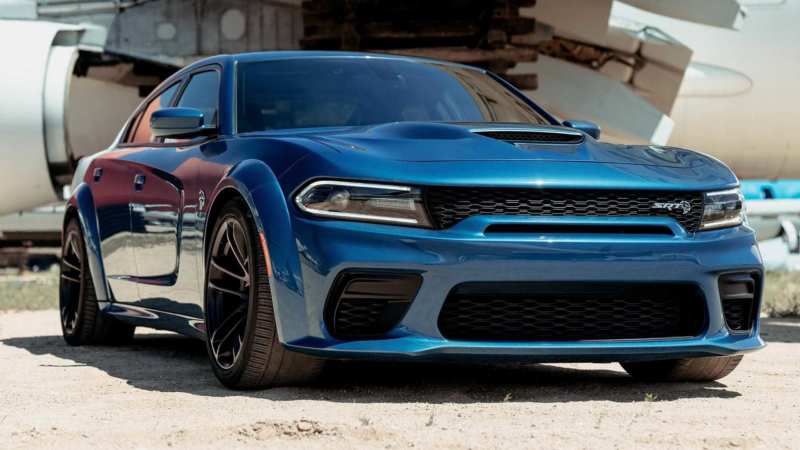 As a result, the car received a good update. The exterior has become more aggressive, sporty, and uplifted. Even though it is a sedan, which can be actively used even by family people, it is swift and dynamic. The interior also stands out for the quality of noise isolation, finishing materials. The front seats stand out with reliable side support.

There are no questions about ergonomics. Those sitting on the second row are not deprived of comfort, which is also a plus. Also, the car can offer a reasonably large luggage compartment. It turns out that we have a sufficiently practical car Dodge Charger SRT 2020, equipped with a large number of various electronic assistants, a high level of safety, and a powerful “engine.” 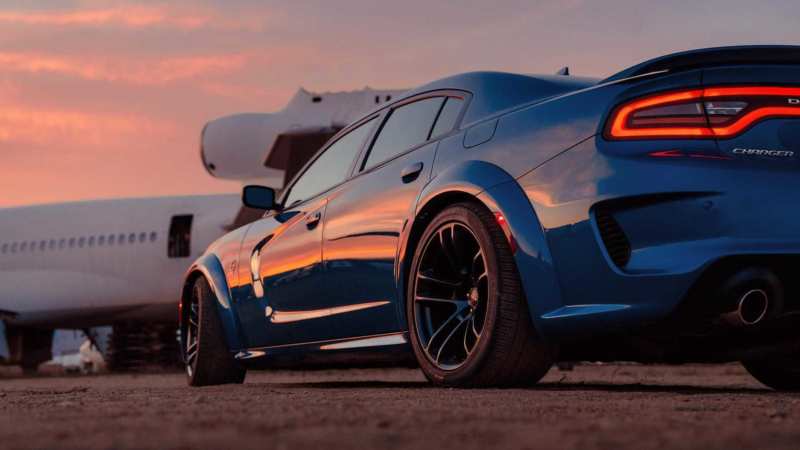 Of course, we should not forget about fuel consumption. The company has made a big bet on this model, equipping it with additional options, so hopefully, the new Dodge Charger SRT Hellcat will be able to compete with Ford and Chevrolet, which are already firmly entrenched in the highest places of the top.

We advise you to read the article: History of Dodge 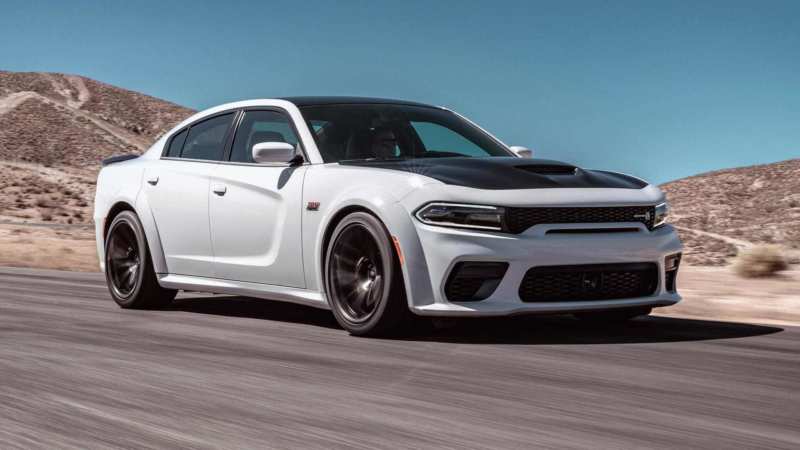 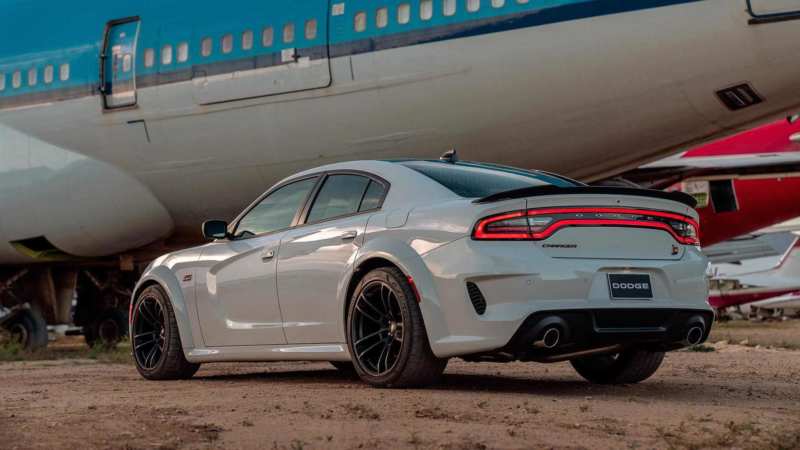 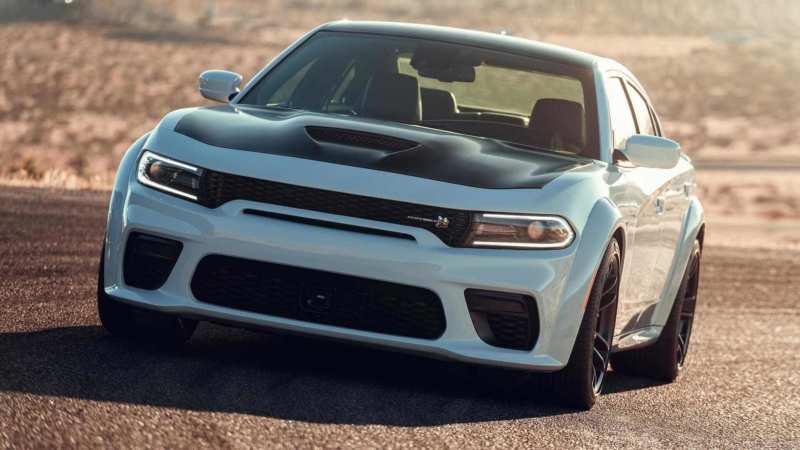 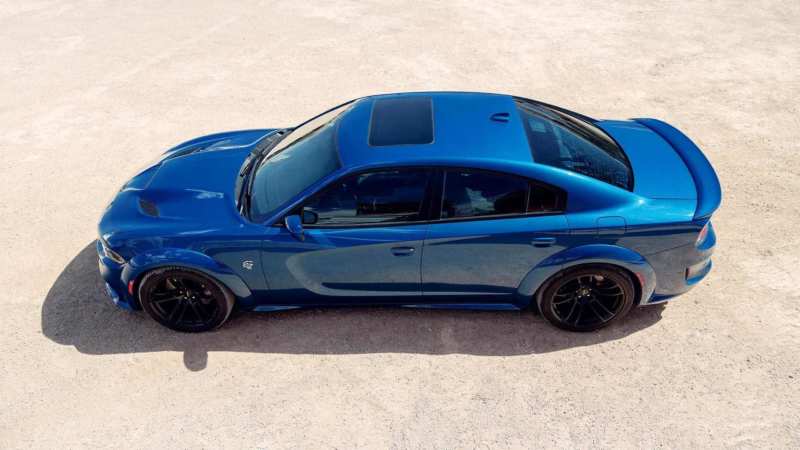 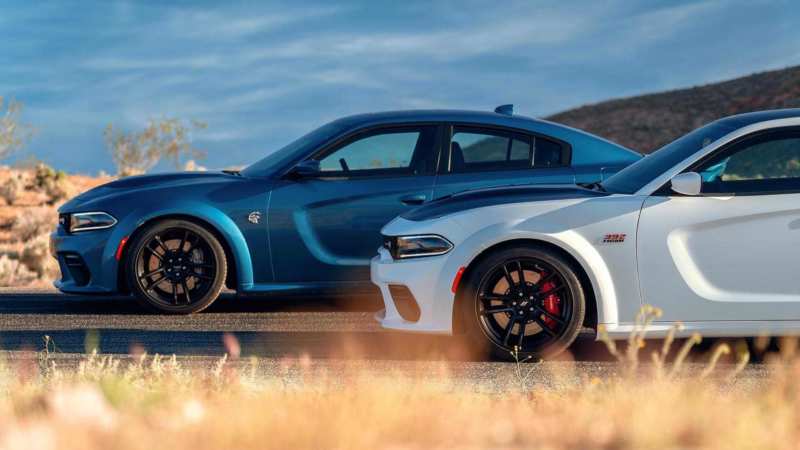 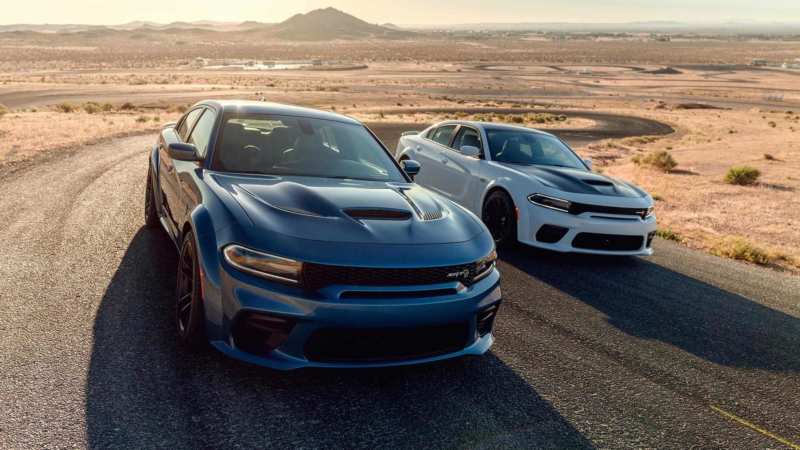 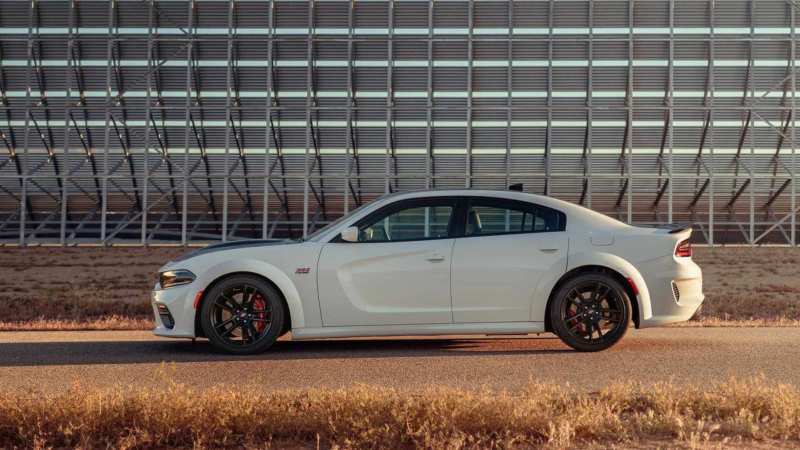 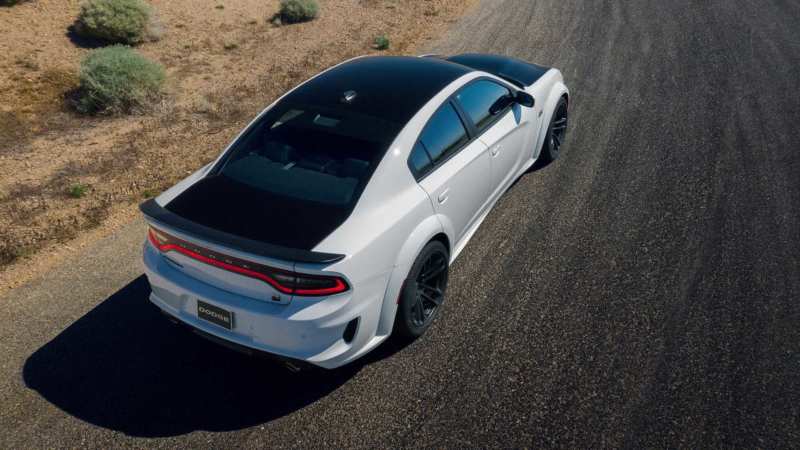 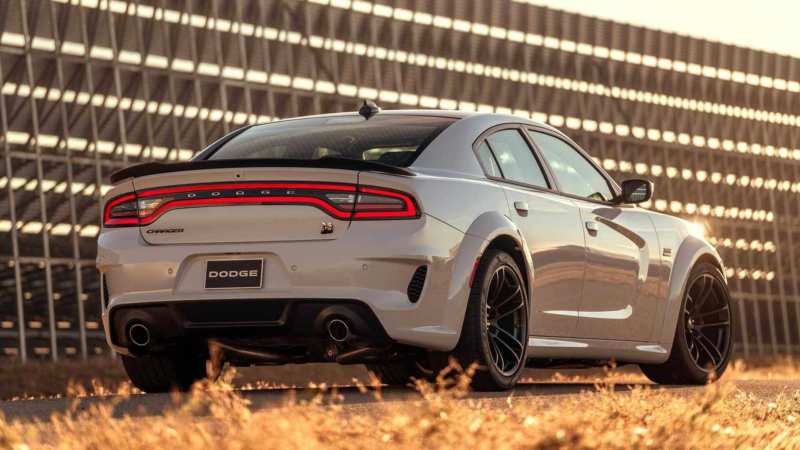