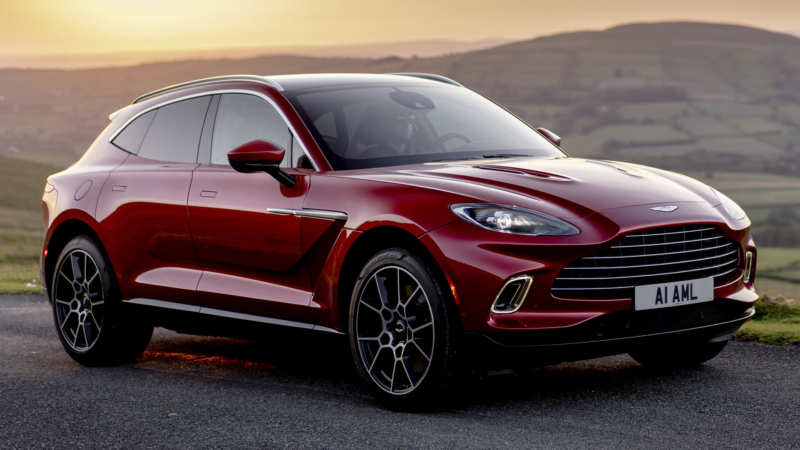 The new 2019 Aston Martin DBX is the British company’s first crossover, which was presented at the 2019 Los Angeles Auto Show. This sports crossover should successfully compete with similar cars like Bentley Bentayga and Lamborghini Urus.

The British have quite ambitious plans. And this is for a reason, as the leading companies producing sports and luxury cars have realized that crossovers’ popularity is growing. The body design was developed based on the classic corporate style and several original layout solutions. The entire Aston Martin lineup.

It is unusual to look at a sports car with smooth shapes and lacks aggressive qualities. Thus, some people do not like Porsche, but today we are not talking about the German car. The front part of the Aston Martin DBX Crossover has a stylish shape, which can be traced to other British company models. They are similar to each other with the trademark massive radiator grille.

But it is not without similar drop-shaped LED headlights, which look very unusual. The British company’s designers initially managed to play with powerful air intakes circled by the LED line of daytime running lights. But it could not do without sports notes. You can notice them by the hood’s raised lines, reduced to the radiator grille, and the plastic bumper in a splitter style. Not far away, you can notice the cameras and the rest of the sensors.

The external body panels of the Aston Martin DBX 2020 were made of winged metal and composite materials. It is also worth mentioning the presence of a panoramic roof, which makes the interior brighter. 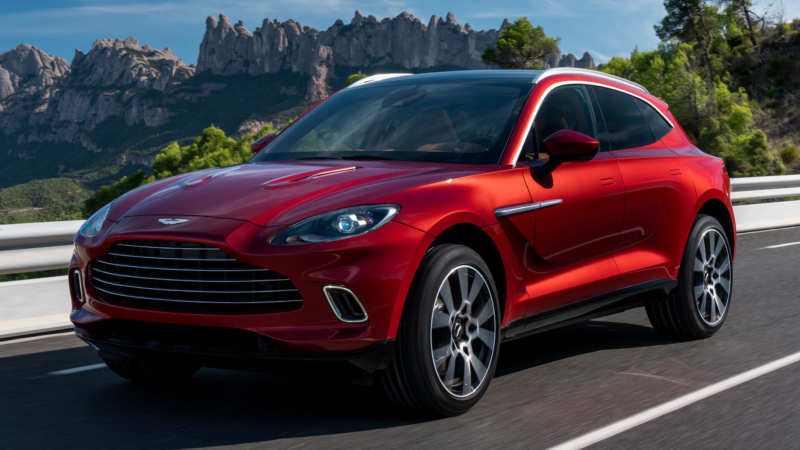 The side of the 2020 Aston Martin DBX looks stunning. Here, the car boasts powerful swells in the wheel arches, as well as a massive gill to maintain a sporty look.
Behind this gill, the designers decided to place a chrome decorative insert. More chrome is used in the window trims and rails. The fashionable solutions include the presence of retractable door handles.

The doors themselves are now frameless. The new crossover is supported by 22-inch wheels with a stylish design, which are shod in Pirelli P Zero tires. The ground clearance height is adjustable, ranging from 190 to 235 millimeters. 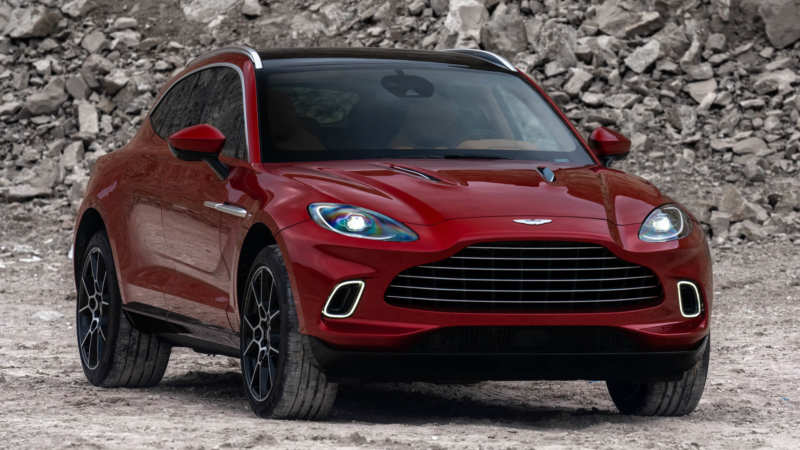 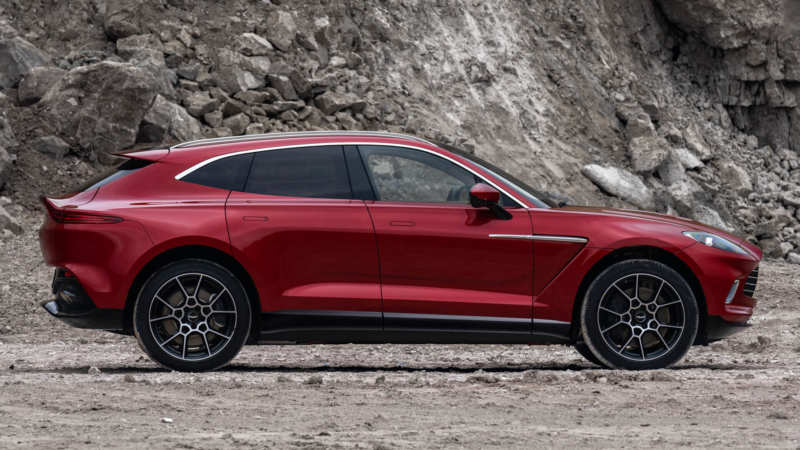 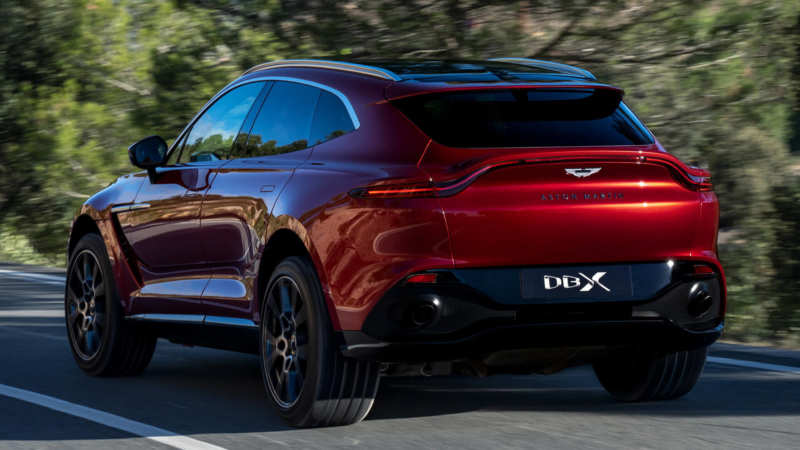 If the front end hints at the lack of aggressive appearance of the Aston Martin DBX, the rear end completely dismisses all such questions. The signature solid diode light, raised in the center, immediately catches the eye. Similar styling can be seen in the Aston Martin Vantage. With this elevation came a 2nd spoiler, in addition to the traditional one, which is placed on the roof.

Just for this reason, the company decided to abandon the rear windshield wiper, as the drops will fly off the top spoiler behind the glass. As for the rear bumper, it is a considerable size. Its central lower part was painted in black, where it is possible to see two integrated pipes of the car’s exhaust system. Here the review of the Aston Martin DBX is not finished, and we move on to the interior of the crossover.


The interior of the British Aston Martin DBX 2020 has the highest quality of finishing materials, excellent ergonomics, and rich electronic equipment. By default, the crossover’s interior will be finished in Caithness leather, available in five color variants.

Already essential equipment is equipped with entirely LED optics, a 12.3-inch digital dashboard with unique graphics. The Apple CarPlay system is supported. A comfortable 3-spoke multifunction steering wheel greets the driver with massive paddle paddles in front of it. 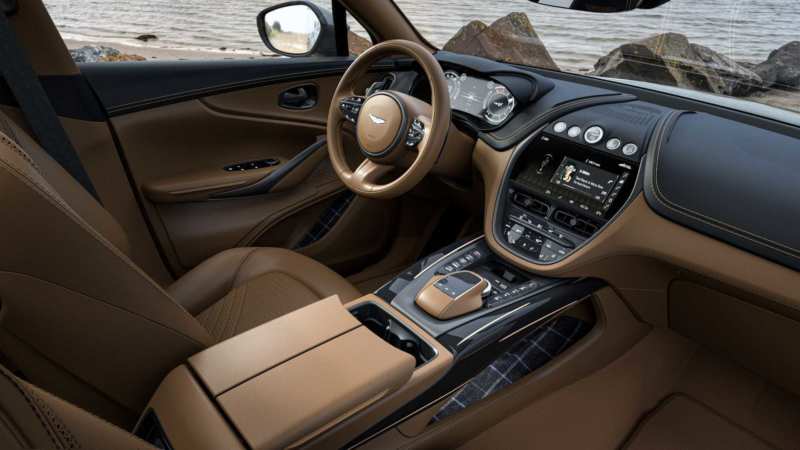 The front row is equipped with bucket seats with light side support. The seats themselves are electrically adjustable (16 ranges), have memory, heating, and optional ventilation. Between the front seats, there is a high tunnel that hides the storage compartments. The center console is decorated with a 10.25-inch multimedia center.

There is also 3-zone climate control, heating of all seats, all-around vision camera, panoramic roof, ambient lighting with 64 shades, and the Harman sound system with 14 speakers with 800 watts of power. As a different option, you can install different types of leather, decorative elements made of wood, metal, or carbon fiber, two-tone upholstery “steering wheel,” and more. 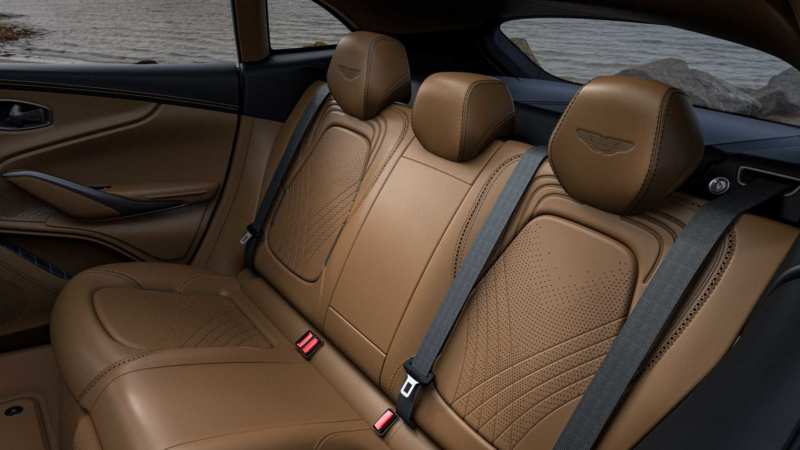 The second row of the Aston Martin DBX can also be comfortably seated. There is enough space here and excellent visibility because the seats are slightly elevated relative to the front seats. The British engineers provided their control panel for the climate system and USB-ports for recharging electronic devices for the rear passengers.

If necessary, you can equip the rear row of the Aston Martin DBX with unique holders for tablets. Since it is a crossover, it should have a roomy trunk. The British did so – 632 liters of usable space. In addition to this, you could not do without an additional compartment in the basement, designed for 62 liters. It is possible to fold the back sofa in three parts in the proportion 40/20/40. You get a flat floor.

During the development, the British company fully applied the developments of the German concern Daimler. The crossover is propelled by a 4.0-liter M177 V8 engine with two AMG turbochargers, which generates 550 horsepower and 700 Nm. The fuel consumption of the Aston Martin DBX varies around 14.3 liters per 100 kilometers.

Together with a powerful engine, engineers provided a 9-speed automatic gearbox 9G-Tronic, which allows the car to spend 4.5 seconds to reach a speed of 100 km / h. It is important to note that this crossover is the first all-wheel drive vehicle in the history of the British brand.

It has a transfer case with a clutch to connect the “front,” borrowed from Mercedes GLE. But as for the driveshafts and inner wheel differentials – this is personal development. The rear differential has an electronically controlled lock. Up to 47 percent of torque can be sent to the front, connected by a clutch, and the rear, if necessary, can get all 100 percent of torque.

The specifications of the Aston Martin DBX allow the crossover to tow a trailer weighing up to 2.7 tons.

The new Aston Martin DBX 2020 is equipped with a suspension that has adaptive shock absorbers, 3-chamber air cylinders, and active stabilizers.

Interestingly, the stabilizer actuators function from a separate 48-volt electric network. It is possible to adjust ground clearance height (from 140-235 mm). There are seven driving modes, which adjust clearance and settings of adaptive shock absorbers.

According to the British representatives, using this scheme during turns the car rolls even less than Aston Martin supercars with passive suspension. The braking system has a six-piston 410mm front and 390mm rear discs, as well as simple floating brackets. The handling is excellent, thanks to the good 54/46 weight distribution.

The car is modern and family-oriented, so it has good safety. The novelty boasts availability:

Conveyor assembly of the new crossover will be at a new plant in Welsh St. Athan. The first stage of assembly assumes production of about 5 thousand copies every year, but after that the company will reach 15,000 cars annually. The price of the Aston Martin DBX starts from 14 500 000 rubles for the Russian market.

In addition, there will be a quota of 83 cars for 2020. Half of them have already been ordered and the first buyers should have already received the cars in summer 2020. In addition to the basic equipment, there is a list of additional equipment available for the buyer, which can be found on the website. 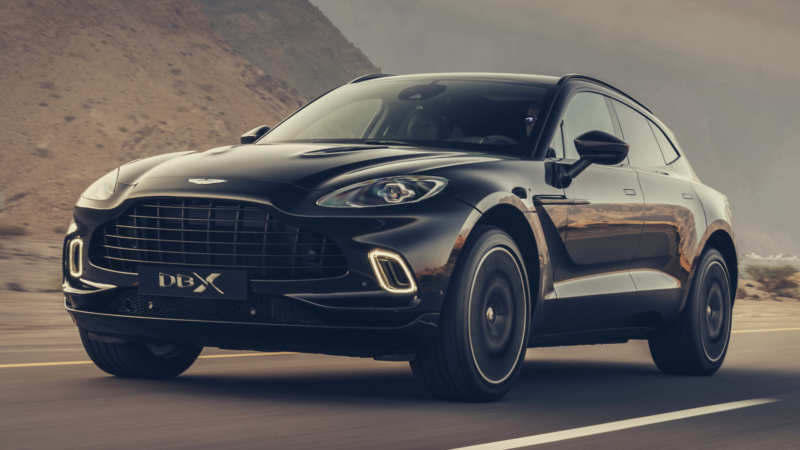 Paying attention to the cost and rating, real competitors of the novelty are not so much. The competitor of Aston Martin DBX is Lamborghini Urus, Bentley Bentayga, Porsche Cayenne, Maserati Levante, the latest Jaguar XKR and BMW X6.

So, the British company Aston Martin was able to release its first-ever crossover with all-wheel drive in the luxury segment in time. Of course, the car is far from being the fastest among its competitors (partly because of its large weight and not as powerful as engines), but it has something different. The British company’s tradition is closely intertwined with the quality of assembly, high-quality finishing materials, and comfort.

The new Aston Martin DBX 2021 does not look like other crossovers. It has a fast and sporty design, the most modern technologies, and a high safety level. It is good that the novelty will be sold in Russia. However, the price turned out to be quite severe. But real connoisseurs of the British car industry will not be able to stop anything. 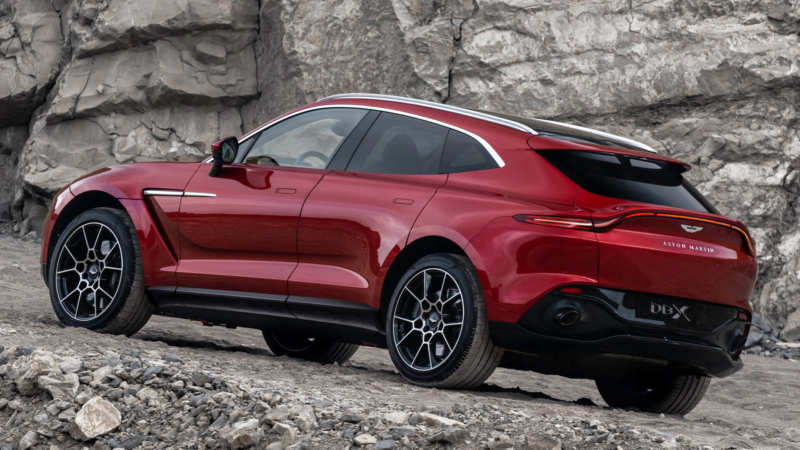 We suggest you read the article: History of Aston Martin 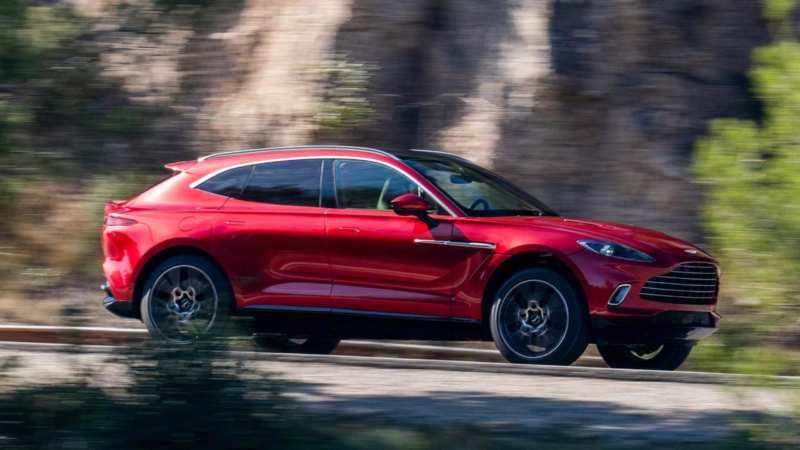 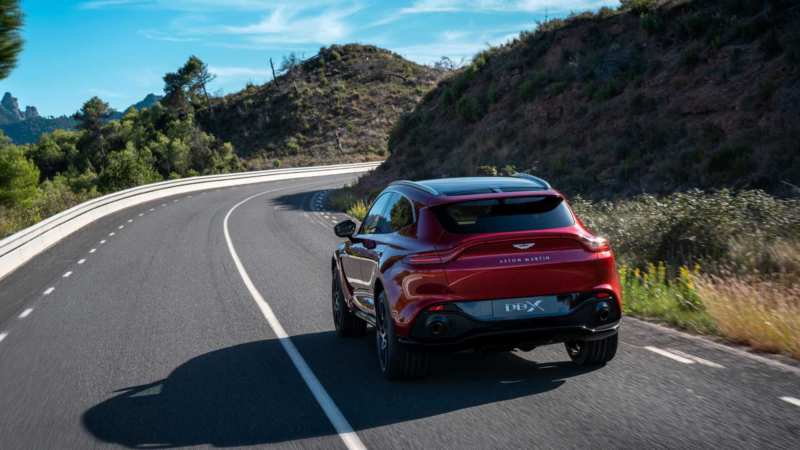 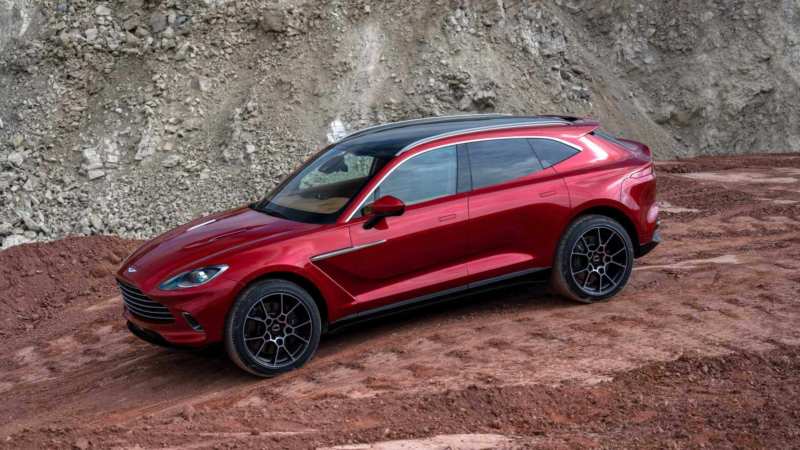 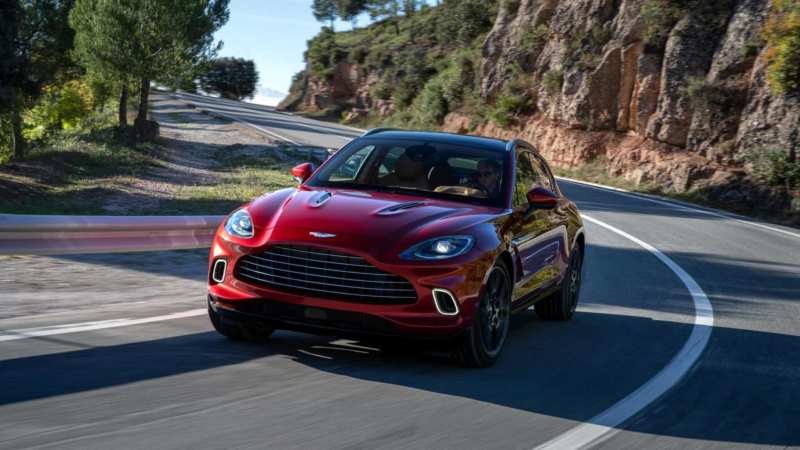 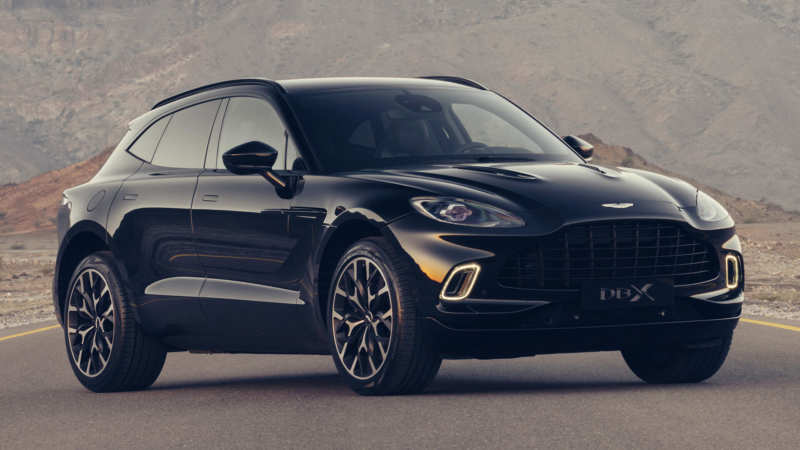 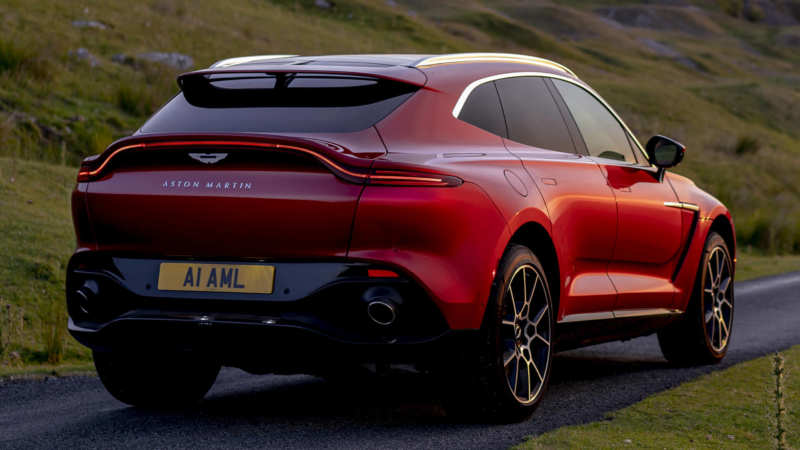 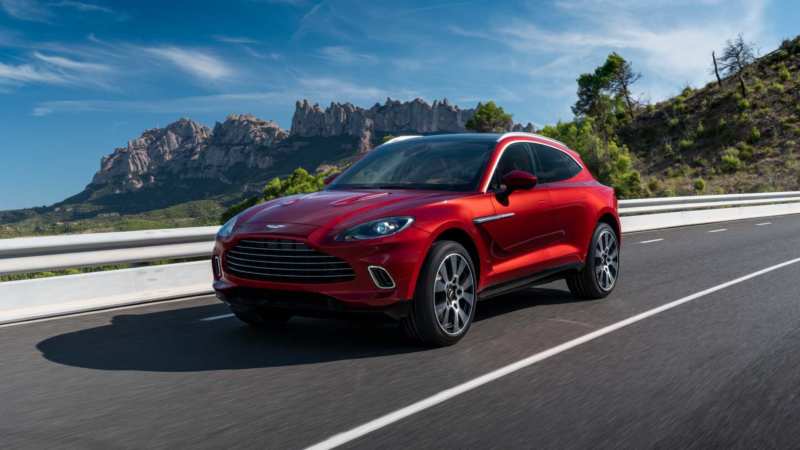 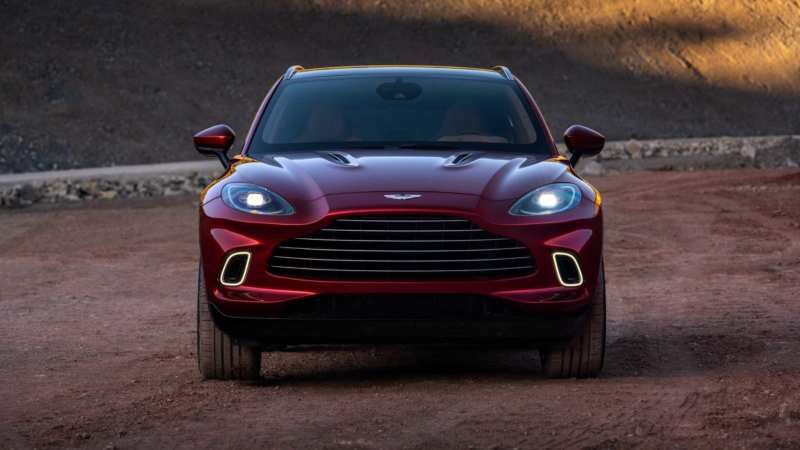