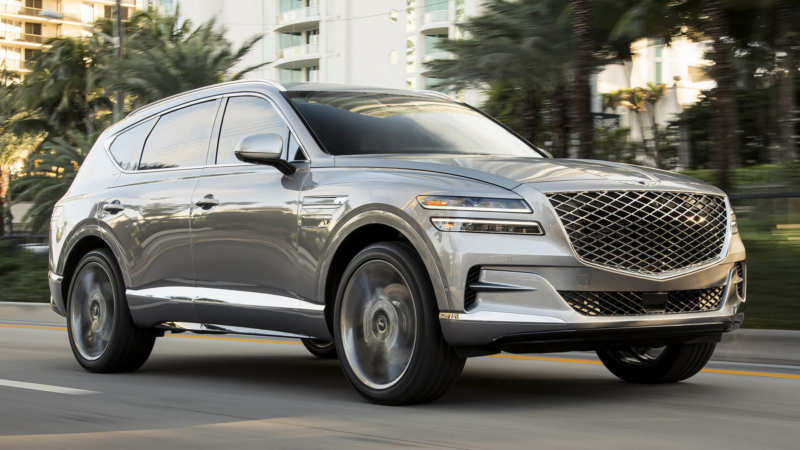 The Genesis GV80 is a rear- or all-wheel-drive premium mid-range crossover. In addition, it is the first car of its kind from South Korea. The car has unsurpassed appearance, very high quality interior, having 5- or 7-seat accommodation, the most modern equipment with many progressive options. Genesis GV80 crossover was officially presented on January 15, 2020. The concept version made its debut back in the spring of 2017 during the New York International Auto Show. The entire model range Genesis.


Looking at the photos, you can easily understand that the new Korean crossover Genesis GV80 does not look like any of the company’s past models at all. The development department has created large dimensions and provided for a large number of original decorations. Because of this, even experienced car enthusiasts may not be easy to recognize the car, despite the emblem. The front of the SUV is massive but rather low. In addition to this, it is sloping, which should have a positive impact on visibility. The hood looks quite distinct.

Partly because of the “hump” that extends across the entire central part. But the sides of the cover are more modest. However, this is a justified decision, as above them there are headlights, which have an unusual appearance. On each side, there are two horizontal lines placed one above the other. It is clear that inside there is only a modern filler, which consists of LEDs. 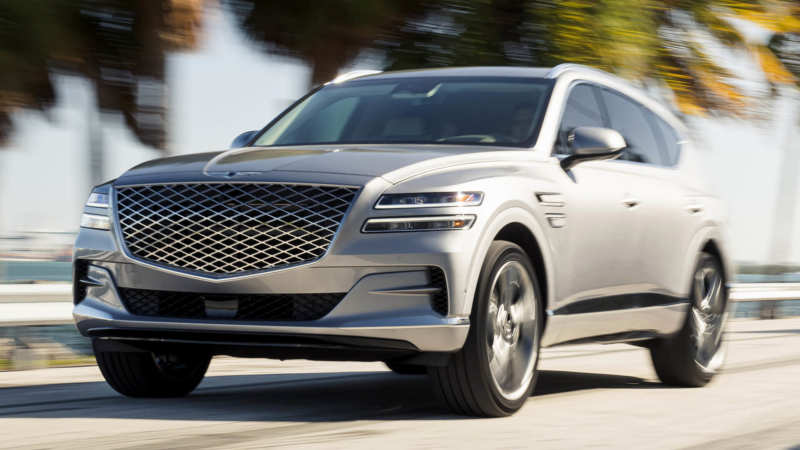 The lion’s share of the central part is devoted to the main trapezoidal air intake. It got quite a little pattern and some decorative strips. All this was painted in chrome. There is not a lot of space for the dodger. Its upper part is equipped with a small amount of relief, in which two side holes are gracefully inscribed, which are needed to get the airflow to the front brakes. There is a narrow plastic strip between them. The Genesis GV80 lacks a protective plastic layer, as the car belongs to the premium niche.

The side of the Genesis GV80 2020 is made quite interesting. 19-inch wheels support the crossover as standard. However, 22-inch “rollers” can be installed optionally. The look is attracted by the lines, mainly the trim of the wheel arches. Unexpectedly also look decorative gills, which seem to support the appearance of headlights. The side is equipped with a sloping roofline, but it is not coupe-like. There are triangular windows in the rear pillars. The ground clearance height is 205 millimeters. From the side, the car looks harmonious and sporty. 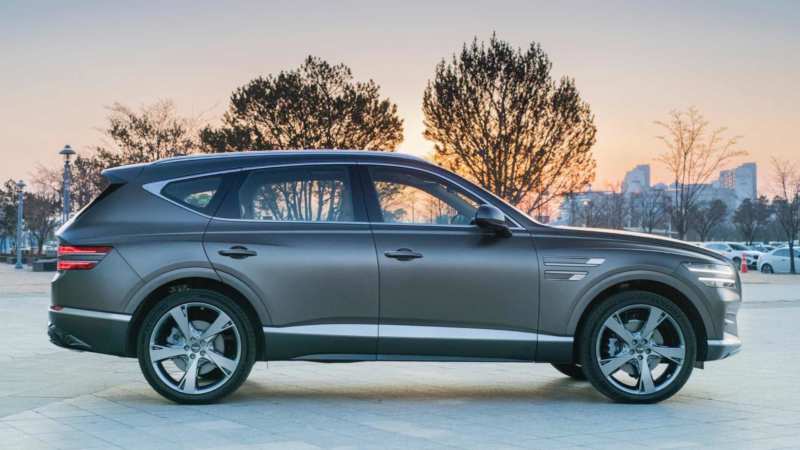 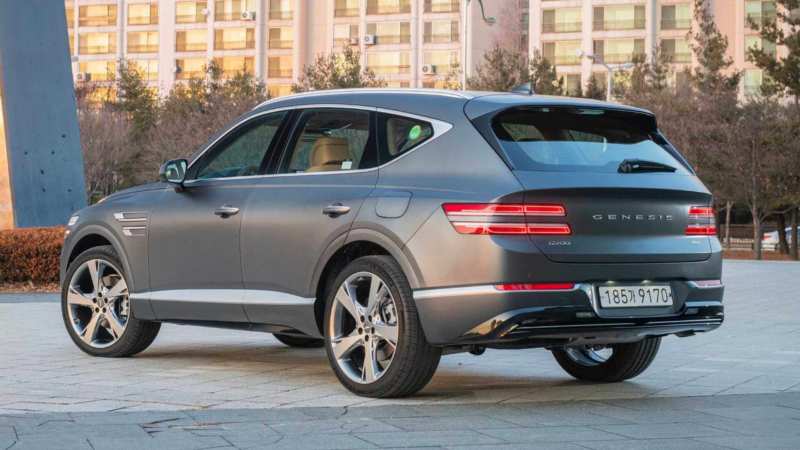 The rear of the 2020 Genesis GV80 stands out with the help of rear lights, which resembles the front headlights and a monumental inscription with the brand name between them. The rear of the “Korean” boasts a neat spoiler visor on the top of the luggage compartment door. The bumper, with its recessed lines, where reflectors are built-in, looks unusual.

What also stands out is the black lower bumper trim, which is not equipped with an exhaust system, not even of the decorative type. But the American version has two huge integrated nozzles. The review of the Genesis GV80 shows clearly that it is possible to admire not only famous German crossovers.


Once inside the Korean car, you can easily imagine yourself driving a spaceship of the future. The crossover Genesis GV80 2020 has simply excellent finishing materials, where it is possible to refer soft real leather, metals and even alcantara. All this is complemented by an unsurpassed multimedia system and really luxurious seats.

Sitting in the driver’s seat next to you can see the comfortable and multifunctional 2-spoke steering wheel, behind which hides a massive 12.3-inch display, responsible mainly for displaying the car’s technical parameters. Informativeness is at a high level. The front boasts comfortable seats with electric adjustments. 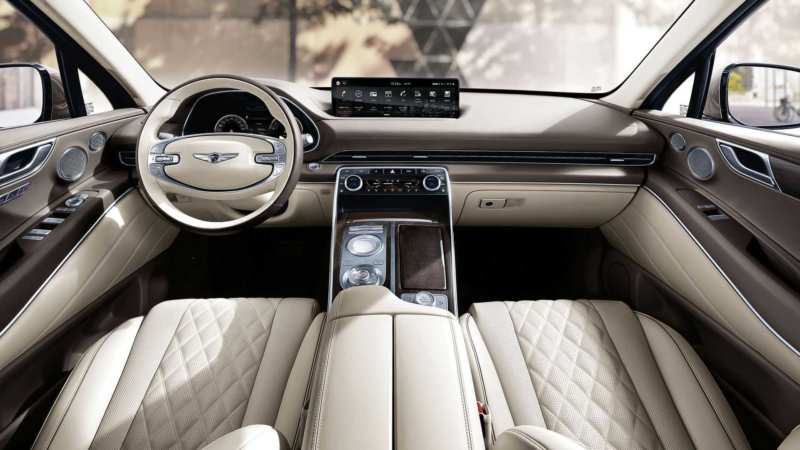 The center console stands out absolutely everything. You can hardly find a similar one in any other car. Everything looks a bit minimalist. At the very top is a large, widescreen 14.3-inch screen, which allows you to configure most of the car’s available functions. You can notice another touchscreen display, which is responsible for the 4-zone climate system.

You can also see a few analog-type switches here, which help properly adjust the Genesis GV80 crossover’s driving characteristics. The tunnel features only a smart gearshift switch and an armrest, which has cupholders inside in addition to a cooling chamber. Further, when lowered, the tunnel transitions to the rear row, allowing the passengers sitting behind to take advantage of certain other features. 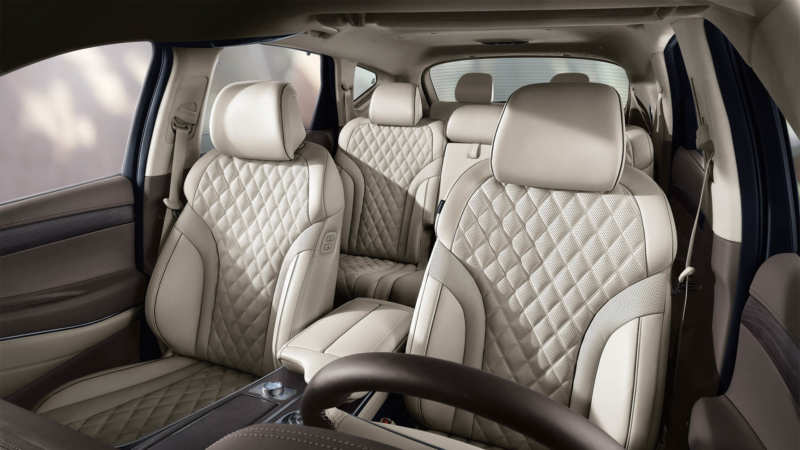 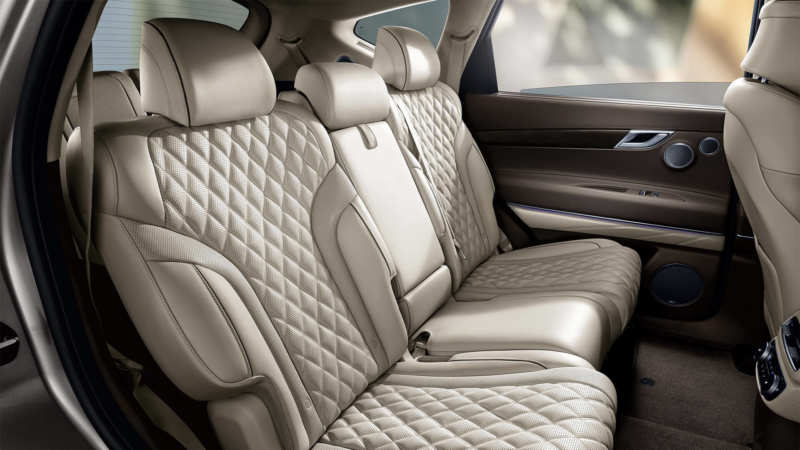 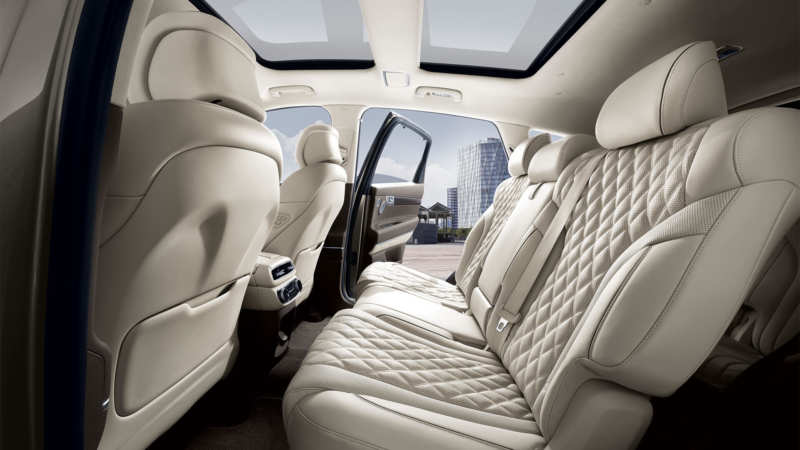 Interestingly, each Genesis GV80 seat is equipped with seven air chambers to prevent muscle swelling and keep you from falling asleep at the wheel.

There are no questions about the available space. There is enough space not only in the front but also in the second row. For the rear passengers, there is a separate sofa, which is regulated by the electric drive. And it should be noted that rear passengers can regulate their position in a wide range. Of course, there is heating, ventilation, and even massage as an option.

Passengers can enjoy their climate control, a fold-down armrest with cupholders in the center, and a power outlet and USB jack. Although the base versions are designed for five people, a two-seat “galley” can be installed as a separate option, which is more suitable to accommodate children, teenagers, or short adults. There is no information about the luggage compartment, but it is clear that it is just huge. It is possible to remove the third row of seats in two equal sections and the second – in three parts in the proportion “40/20/40”. This allows you to achieve a level cargo area. Under the raised floor, the Koreans have placed a “trolley,” as well as tools.


The Korean company plans to bring its crossover to us with three “engines” to choose from. By default, the automobile is completed with a gasoline 4-cylinder 2.5-liter power-unit T-GDI having turbocharging, direct injection system, 16-valve DOHC type distributing mechanism, and also phase shifters on an intake and an exhaust. All this allows for 249 horsepower (422 Nm).

The top-of-the-line Genesis GV80 is equipped with a 3.5-liter, six-cylinder V-GDI gasoline engine that is turbocharged has combined fuel injection, 24-valve timing, and variable valve timing. As a result, it delivers 379 horsepower (530 Nm).

Fuel consumption in the combined cycle with gasoline engines ranges from 10.4 to 11.7 liters. With diesel engines, it is 8.8 liters per 100 kilometers.


An eight-speed hydromechanical automatic gearbox operates with these engines, which transfers the torque to the rear wheels. As a separate option, it will be possible to equip the car with the HTRAC all-wheel-drive system, which, using a multi-disc clutch, will engage the front wheels. If the car comes with an all-wheel-drive system, the rear differential will be electronically controlled.

Three driving modes change the car’s behavior: mud, sand, and snow. To accelerate from a place to the first hundred will take from 5.5 to 7.5 seconds. The maximum speed is 220-240 kilometers per hour. The Genesis GV80 performance is worthy of respect and can impose a fight even to more expensive SUVs.


For their new crossover, the Koreans decided to use the latest “rear-wheel drive” base with a traditional longitudinal powertrain and a load-bearing body made of high-strength steel. As for the doors, hood, and trunk lid, they are made of aluminum. The basic version has a fully independent suspension, which received steel springs, traditional shock absorbers, and stabilizers transverse stability. There is a double-wishbone system in the front and a multilevel system in the rear.

As an additional option, you can order an adaptive chassis with electronically controlled shock absorbers that change stiffness based on data from the navigation system and the front camera. The latter has been taught to scan the road in front of the car. The car is steered by the rack-and-pinion type of steering device and the active electric booster. The Genesis GV80 SUV braking system boasts ventilated disc brakes that work together with ABS, EBD, and other electronic systems.


The new Korean car is automatically able to analyze the current driving conditions. It can provide maximum safety along with excellent driving quality. For example, the Korean model is equipped with a system that prevents head-on collisions. When turning left at an intersection, the electronics begin to brake automatically when the oncoming car is detected in the oncoming lane. It can also analyze other cars, pedestrians, and cyclists on the road while driving and warns the driver of a possible threat.

When necessary, it can activate the braking system when the risk of collision increases. The automatic braking system can also be activated by front and side radars. Also, engineers have installed a driver concentration support system. The instrument panel is equipped with a camera and sensors that detect the driver’s gaze direction. The system can activate a warning signal on the dashboard screen if the driver is not looking at the road.

The Genesis GV80 2021 crossover also boasts cruise control with artificial intelligence. It is complemented by a machine learning system that recognizes and remembers the unique driving style and adapts the car’s handling accordingly in the activated “cruise” mode. There is also a system that prevents collisions in blind spots. When there is a risk of a possible collision with a fast-approaching car from behind and the side, the electronics will help avoid the danger by braking one wheel on the opposite side of the maneuver. This helps the owner to get the crossover back into its original lane as quickly as possible.

The arsenal of “Korean” is equipped with a safe reverse parking system, which can detect objects and pedestrians and warn the driver of the probability of collision, using the braking system when the risk is very high. An automatic parking system has been introduced to increase comfort, allowing you to park your car remotely using the Smart key. All models have ten airbags, which can include a front-center airbag and an intelligent front lighting system. 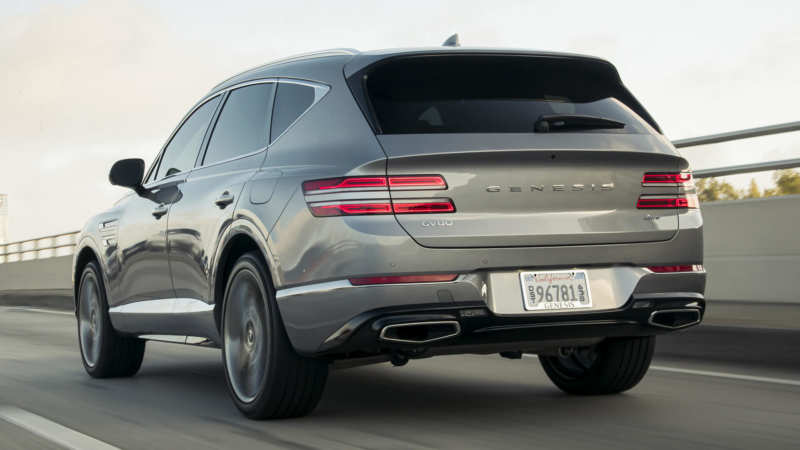 
The “Korean” has very strong competitors in this class, but it is obvious that the company’s management intends to get close to the leading brands. The competitor of Genesis GV80 can be BMW X5, Mercedes-Benz GLE, Audi Q5, Lexus RX, as well as Volkswagen Touareg. As you can see, the lion’s share of competitors are Germans.


So, no matter who says what, the Korean crossover could surprise and show the best possible. Looking at the car, you can’t help but notice that the Korean engineers managed to consider some of their competitors’ mistakes. Of course, now it is difficult to say exactly how the novelty will show itself in the future. Still, it intends to fight with the leading German companies in this class seriously. It has an original exterior, a very comfortable, comfortable, high-quality interior, and a powerful power plant. This should include an all-wheel drive, an abundance of packages, and a price tag that is not as high as some of its classmates. The Genesis GV80 has every chance of success. 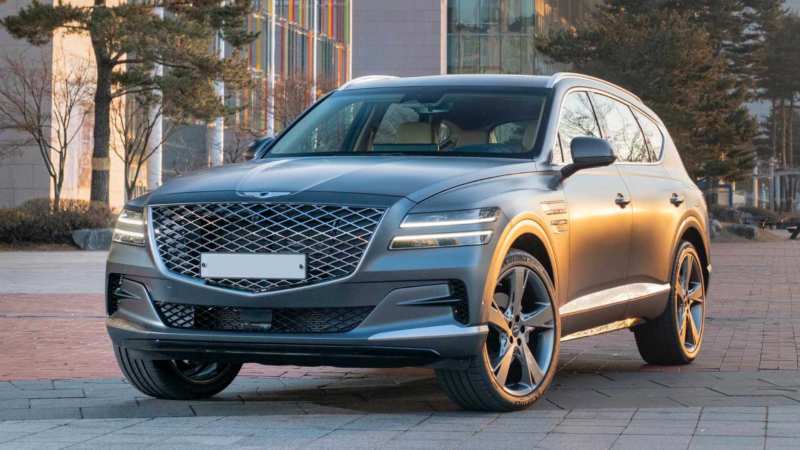 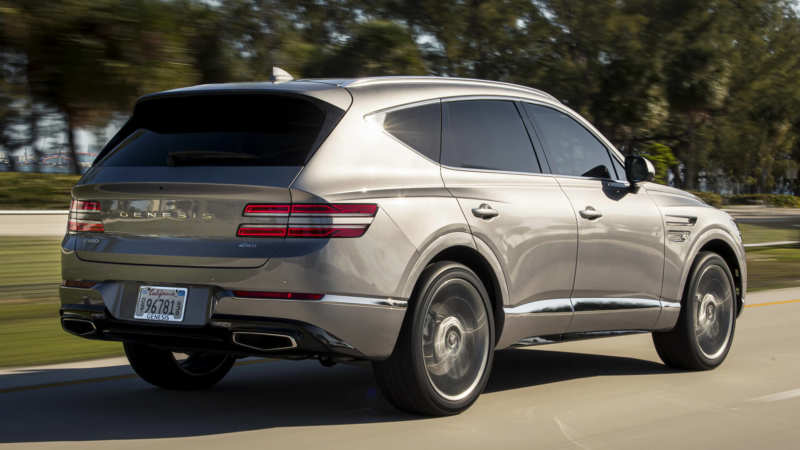 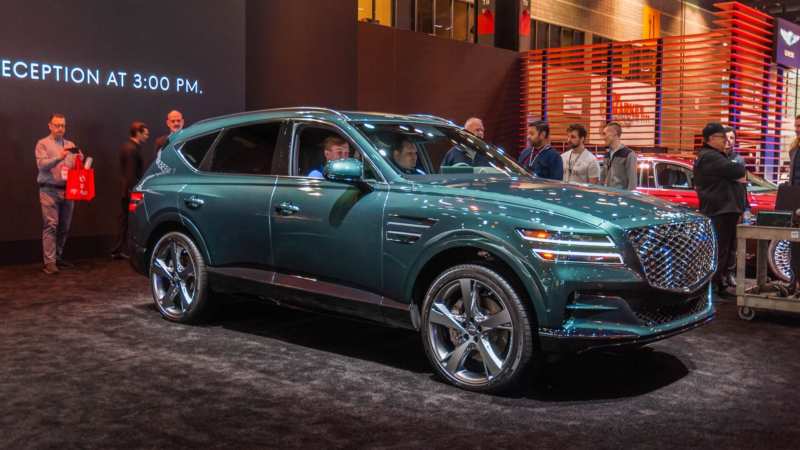 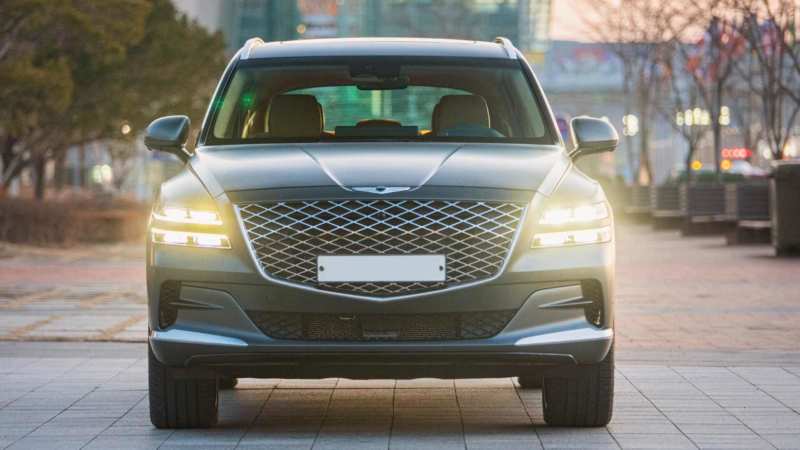 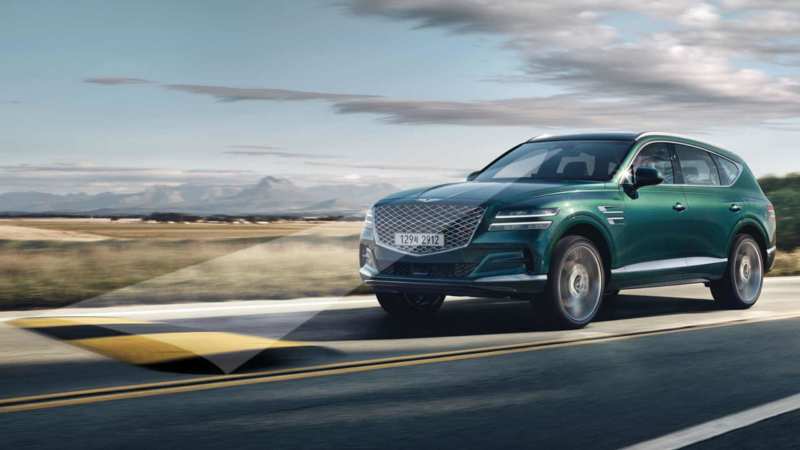 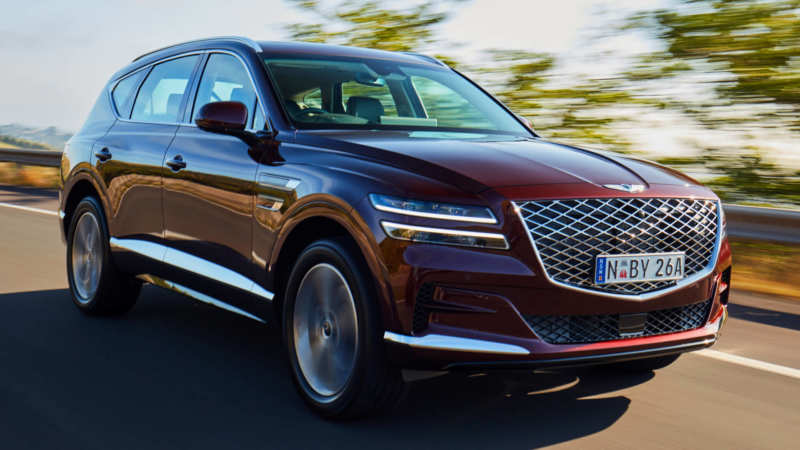 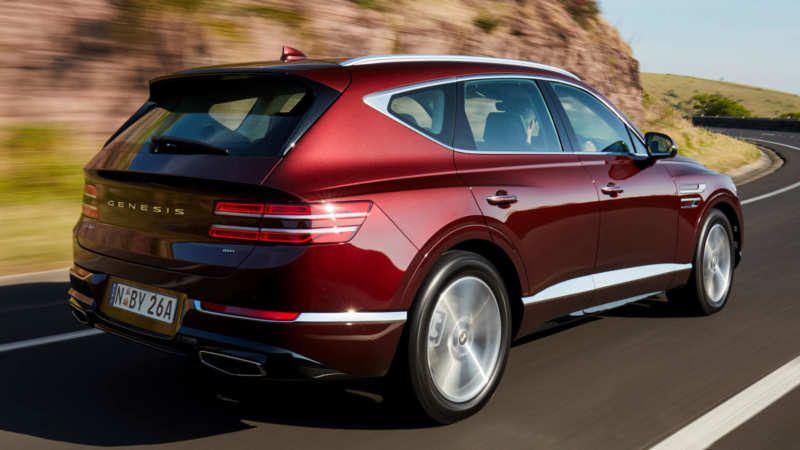 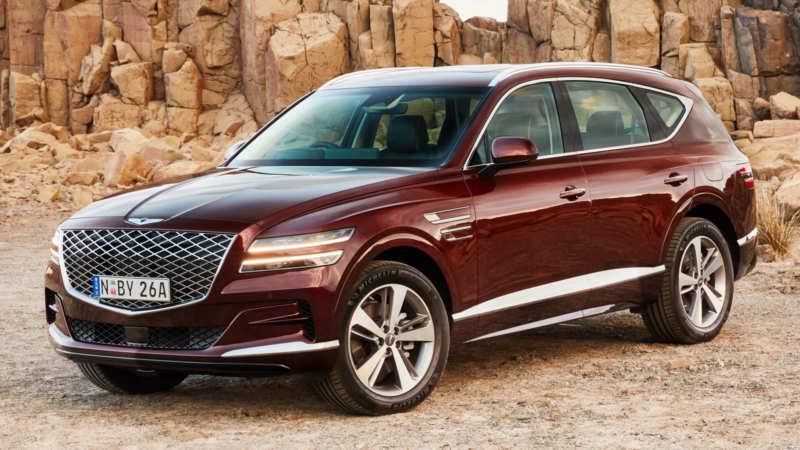 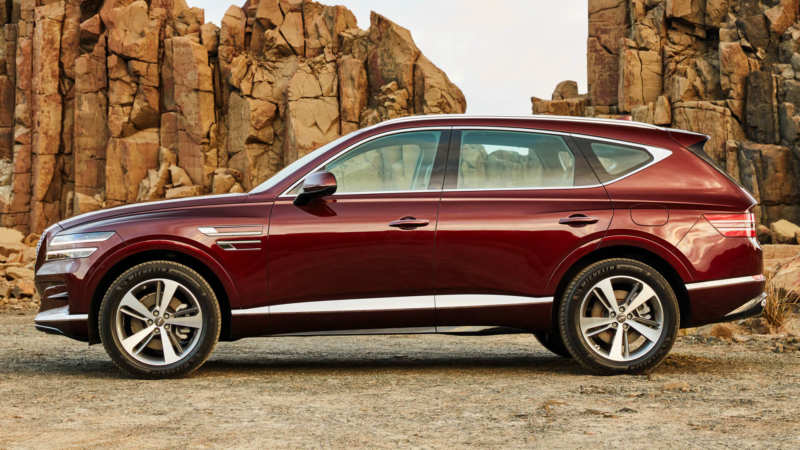 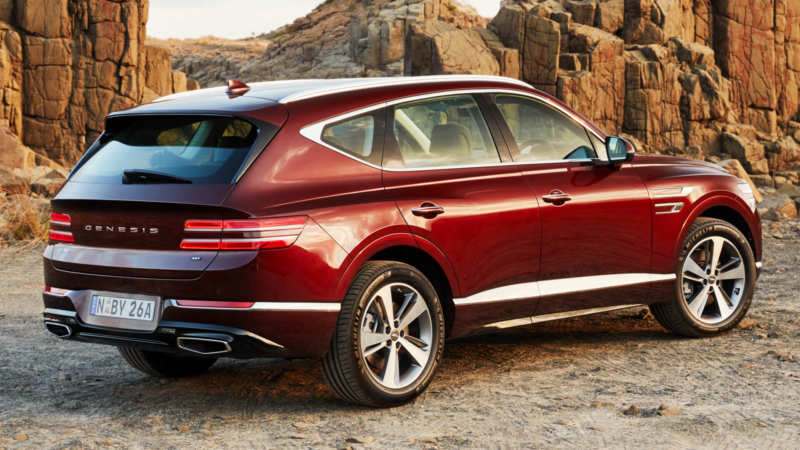 Chery Tiggo 2 and its subsequent modifications