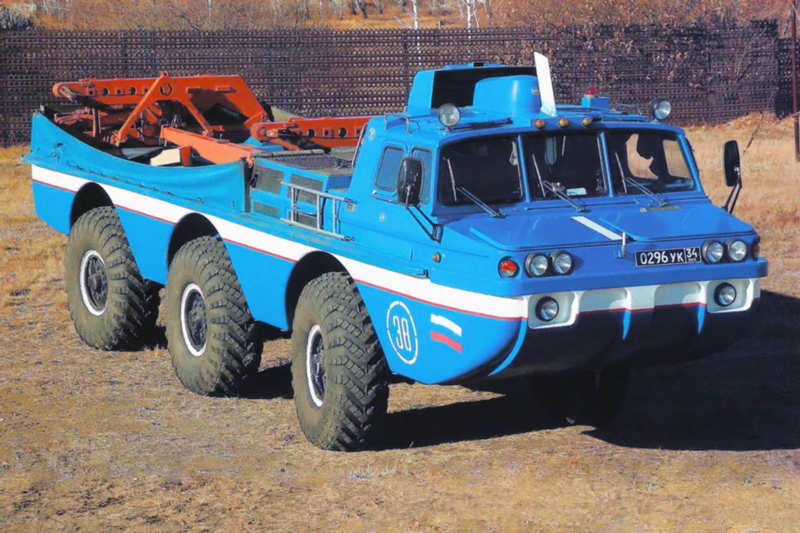 Few people know about the existence of a “special design bureau”, which carries out its activities under the patronage of the ZIL plant. Perhaps the most ambitious project of SKB ZIL was the creation of a search and rescue complex “Blue Bird”. The project model was called “ZIL-4906” and was the last project implemented in SKB during the lifetime of Vitaly Grachev, the founder and head of the bureau. The whole model range is ZIL.

The history of the all-terrain vehicle

In the early 60s of the last century, at the dawn of the space boom, there was a need for specialized equipment that could deliver astronauts from any place after landing. In 1965, the crew of the Voskhod-2 rocket consisting of Pavel Belyaev and Alexei Leonov went into orbit. Performing the tasks assigned to Leonov was with complications. So, not only that, when returning to Earth failed automatics, and Belyaev had no choice but to direct the descent module manually.

As a result, instead of the usual Kazakh steppe, the crew landed in the taiga near Perm. There was simply nothing to get people out of the rough wilderness. Weary of overloads, the astronauts had to get up on skis and live in the woods for two days, making their way through the deep snow to the glade from which the helicopter picked them up. After this incident Sergey Pavlovich Korolev addressed to SKB ZIL with a request to Grachev to develop a car, which would not only have high cross-country ability, but would pass everywhere, even through the taiga on the two-meter snow. 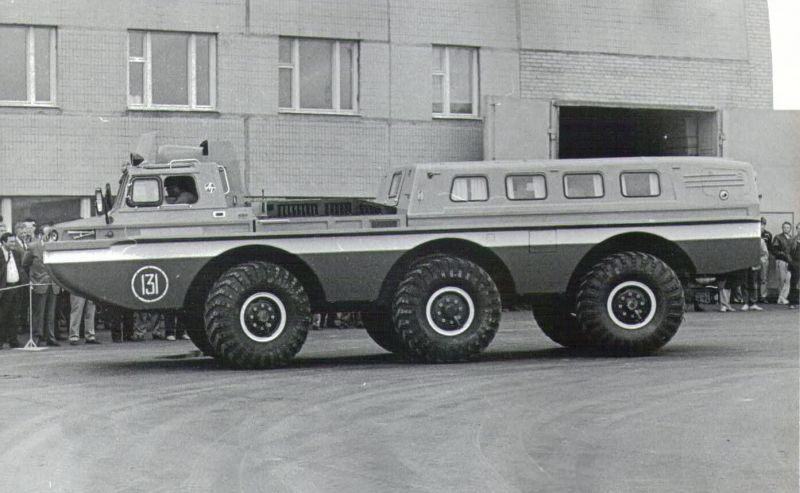 For many years, the development of an all-terrain vehicle has been going on. Not a few issues related to the choice of the working element and parts of the machine for its maximum efficiency were solved. Until then, the Likhachev plant had already been producing snowmobile-type machines – ZIL-4904. The problem was that such cars are not adapted to the hard surface, and in the way after the astronauts it could create difficulties. It was necessary to come up with something more universal.

At the same time, the topic of the wheeled all-terrain vehicle developed as the simplest, most reliable and unpretentious one. It was in those years that the famous Gračevo School of Off-road Vehicle Design was formed, which implied the following principles: minimum weight, maximum possible size tyres, maximum ground clearance, system of centralized pressure change in tyres, non-central wheel reducers, flatbed locked drive of all wheels, front and rear steering wheels, independent torsional suspension, hermetic brakes, gasoline engine, maximum dynamic factor, ultra-low steady speed. In general, everything you need for an all-terrain vehicle. 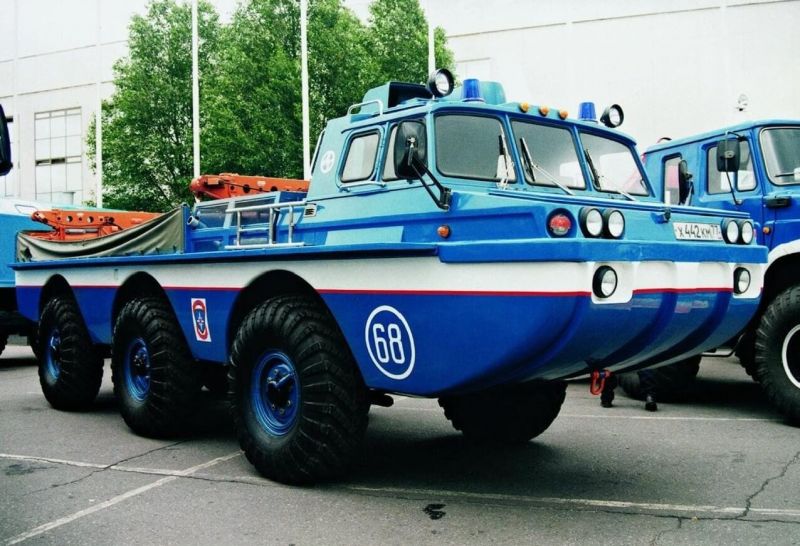 Almost all of the SKB’s off-road vehicles were amphibious, with some of them exceeding 15 km/h in water speed. It was the “Grachyovtsy” who were the first in the world who invented the idea of pumping air into the units that were under water for their complete sealing. Abroad, such a decision will come only a decade later.

And now, under the leadership of Grachev, PEU-1 was built – a search and evacuation unit, which was a 6-wheeled amphibious all-terrain vehicle with a light steel frame and a body of fiberglass. The machine, which easily overcame two-meter moats, surpassed all expectations of the customer, but because of internal disagreements on the ZIL in a series has not gone.

Passenger modification “ZIL-49061” could accommodate 4 people in the cabin, had 4 seats and 3 pairs of stretchers in the cabin, because it was 3 people in the crews of the ships “Vostok” and “Soyuz”. The compartment was equipped with medical equipment, compartments for provisions, modernized air-conditioning system and could provide fully autonomous stay for 3 days.

Driver’s and three crew members’ workplaces were located in a cabin built into the hull, which also contained instrumentation, radio compass and navigation equipment. A removable hood was placed on top of the cabin. Two hatches with covers were provided for the crew to land and disembark in the roof of the hood. The windscreens of the hood were equipped with a three-brush pneumatic windscreen wiper and a manual electric windscreen washer. 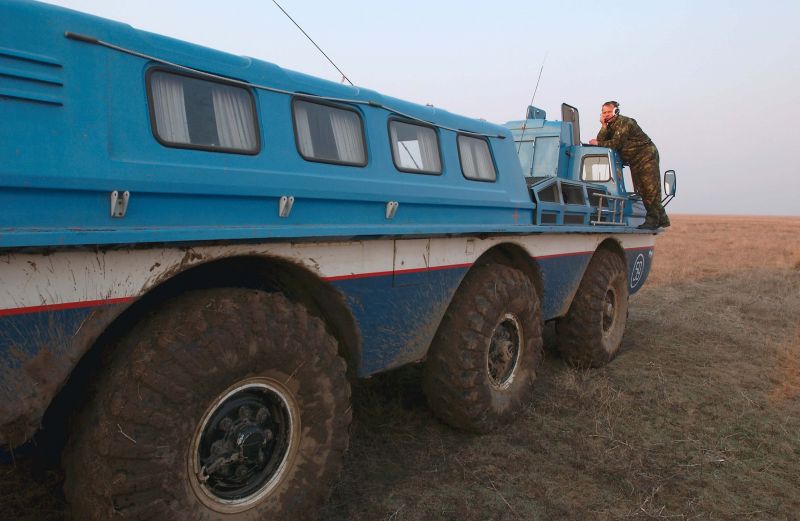 Driver’s seat – semi-rigid type, anatomical profile, adjustable by the height of the driver and the angle of inclination of the backrest. To facilitate boarding and disembarkation of the crew through the hatches of the cockpit, the backrest of the driver’s seat and the right backrest of the crew were tilted. The crew seat could tilt forward. The double backrest also tilted forward, allowing access to the trunk.

The inner cavity of the backrest, when folded back, could serve as a table. The driver’s and crew’s workplaces were equipped with Norma safety belts. A passenger compartment was built into the rear of the displacement hull to accommodate and service three passengers and three doctors.

A radio intercom system (RPU) was available in the passenger compartment for communication with the cabin. The cabin floor was covered with wool or rubber carpet. Entering the cabin was done through a door in the back wall. The front manhole was used for floating entry to the passenger cabin. To load the stretchers in the rear wall of the cabin, a special manhole hatch was made. 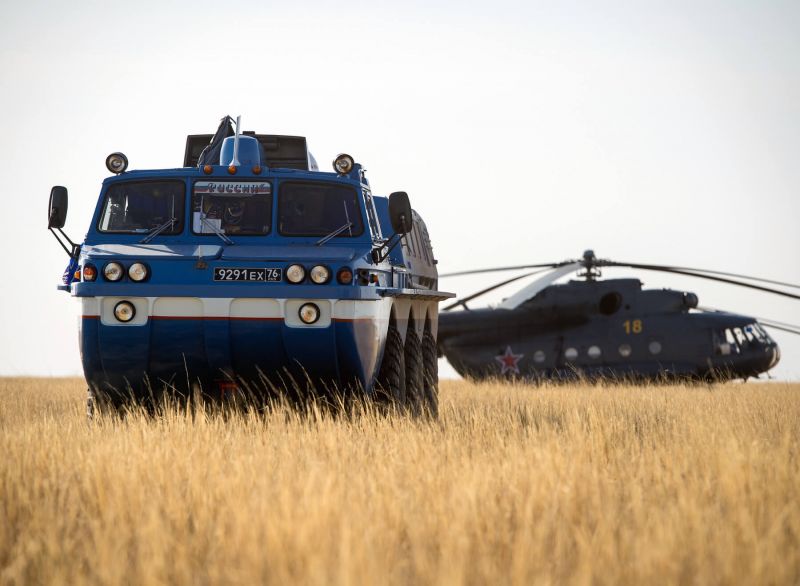 The glazing of the salon consisted of ten deaf safety tempered glasses. At night the salon was illuminated with twelve lamps. In the passenger cabin, except for the dependent heating system consisting of two air-liquid heaters using the heat of the engine cooling system, an independent air heater and air conditioner were installed. Terms of reference prescribes the possibility of transfer of vehicles on Il-76 and An-12 planes and helicopters Mi-6 and Mi-26.

In favor of this, the designers not only “fit” the all-terrain vehicle into the most compact dimensions (9250x2480x2537 mm), but also made removable the glazed cockpit hood. But the rear overhang has increased in comparison with the prototype – it allowed to increase the passenger compartment of the ZIL-49061 and to place the double girder boom of the manipulator on the loading platform of the ZIL-4906.

The transfer case with inter-breast-split differential is combined in one housing with a demultiplier responsible for a reduced row.

All three axles received an independent torsional suspension. The steering wheels are front and rear, and the hydrostatic steering mechanism ensures that the rear wheels are rotated late and automatically corrected for better handling. Tyre pressure can be adjusted from the driver’s seat. To drive on water instead of a water cannon, a pair of propellers with a reliable drive from the “dispenser” were used.

At the heart of the wheeled all-terrain vehicles of the Blue Bird complex is a frame made of aluminum profiles, on which a fiberglass body is installed. Amphibian rotation was carried out by front and rear steerable wheels, and when driving afloat – steerable wheels and water wheels. 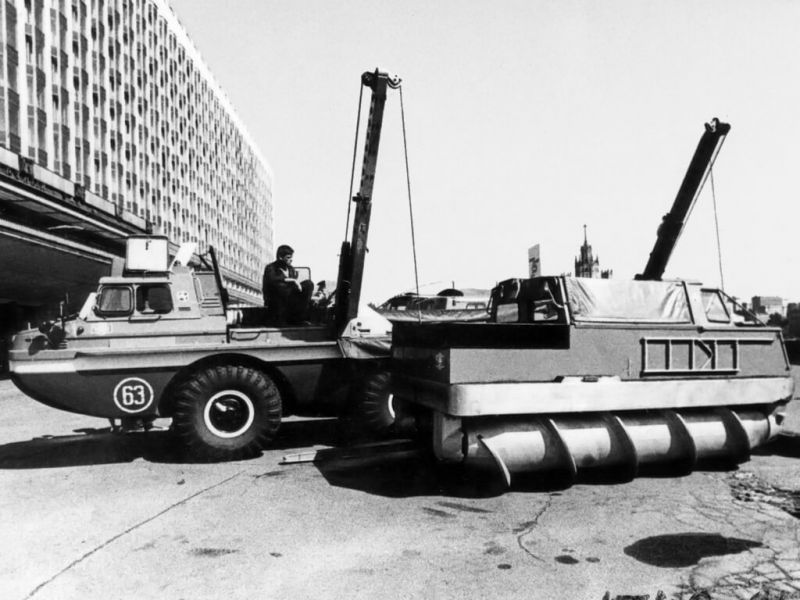 The first trucks were equipped with hydrostatic control mechanism of the rear steering wheels without rigid kinematic connection with the front wheels. However, practice has shown that the mechanism with rigid mechanical connection is more reliable in operation, and therefore later returned to it.

PEU-1 was built only 13 units, and in 1969 in the SKB created a multi-purpose army floating vehicle ZIL-132A, built on the same element base, but with a simpler mechanical gearbox. Alas, that car, unfortunately, remained made in a single copy – by the way, as well as PEU-2, which followed in 1970. However, the second attempt to create a search and evacuation unit is impressive to this day. 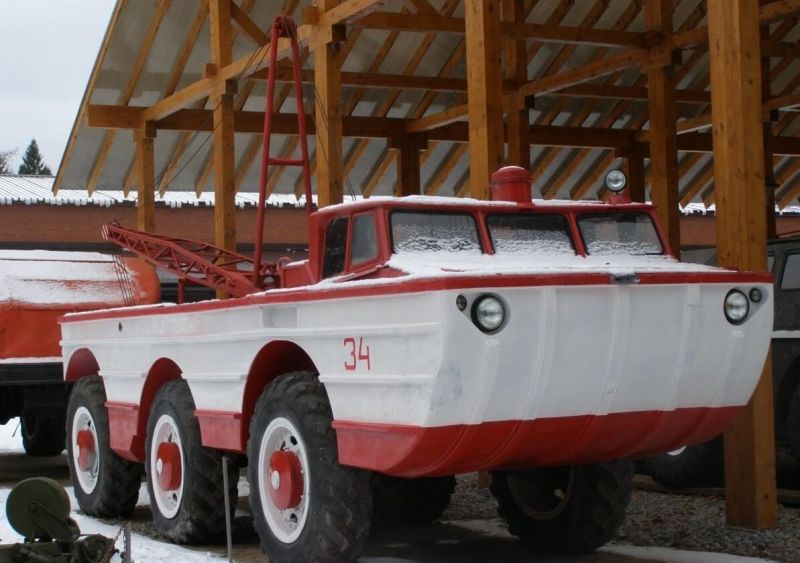 It was this, the largest combined search engine PEU-2 (ZIL-5901), which appeared in the spring of 1970, had a pair of rear engines ZIL-375 with a total output of 360 hp. This power reserve allowed the machine to develop speed on the ground up to 73 km / h, on the water – up to 10 km / h and could carry 10 people. Passages were added by one more idea of the designers. Huge wheels were made of fiberglass – according to the designers’ idea, an all-terrain vehicle on high and light wheels could overcome obstacles from the snow with the ease of movement of moose on the fields brought by the blizzard.

The chassis also had a crew compartment and a platform for the downhill vehicle, which was overloaded by a side crane system. Unfortunately, with a two-fold increase in power, along with the passability and speed of the amphibious system, the weight and size of the system was increased, making it impossible to deliver it by air. 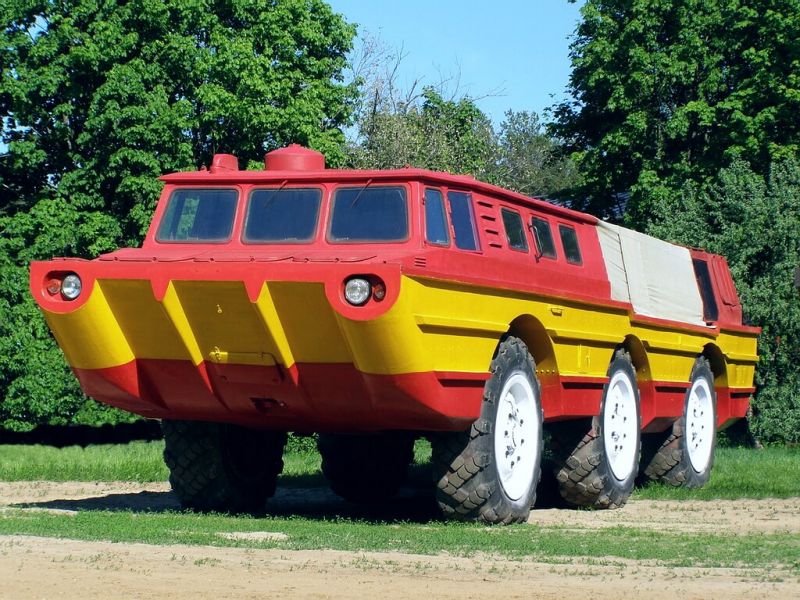 In the cabin there were two heaters from ZIL-130, in the cabin – four from the bus ZIL-158, as well as air conditioning from the limousine ZIL-114 and a wood stove in case of emergency, if the evacuation takes longer and goes into the winter. The vehicle has successfully passed all kinds of tests, but for any trip on public roads on PEU-2 it required a special permission of the State Automobile Inspection, and in addition, it was not included in the cargo compartment of the military transport aircraft. On the whole, it became clear that such a huge vehicle, with all the advantages of comfort, autonomy and almost absolute cross-country ability for search and rescue operations is not very suitable.

Thus, the “Complex-490” was created, which included three vehicles – a pair of maneuverable all-terrain vehicles and a light “screw”. All three units of the complex were equipped with the latest radar equipment and were able to carry out constant communication between themselves, ground base, transport aircraft and landed crew.

The complex provided full detection of the landing site and allowed to get to it, wherever it was located. And the name “Blue Bird” was given to the complex due to the fact that all ATVs in the SKB Grachev were painted in bright colors so that they could be better seen on the ground. For the “Complex 490” they chose blue, but the “bird” in the name appeared, obviously, because of the sky and space theme.

It is said that the director of the plant, P.D. Borodin, did not pay too much to Grachev, who had great connections in the car industry, army and government. Grachev could easily ask metallurgists to create a special alloy specially for the needs of the SKB, to agree on the production of components at an aircraft plant or to conduct joint tests with aviators. Borodin, for his part, had a position of director and a production plan.

Therefore, when the question arose about the possibility of producing 30 copies of PEU-1 for astronauts, and the upstart of Grachev came to Borodin with a request to give the project a green light, the director of the plant refused. Officially, ZIL did not have the resources to produce this equipment. In spite of this, the Blue Bird complex was still released and entered the service of rescuers in 1981. 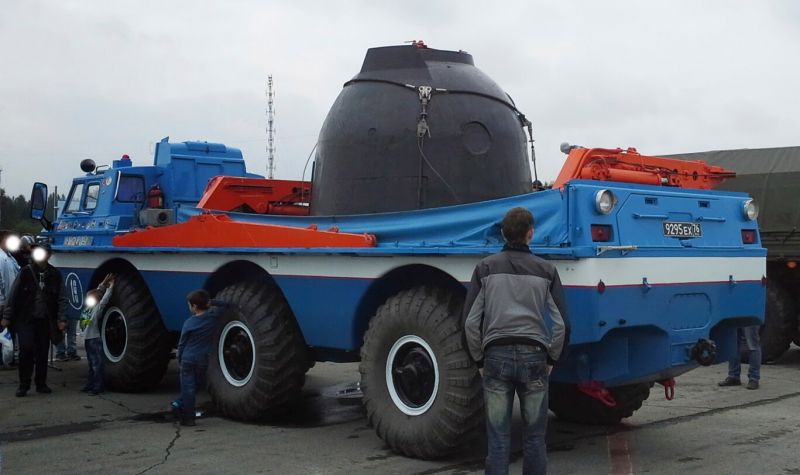 Within ten years, 12 trucks, 14 passenger and 5 screw rotors were built. But even with the collapse of the Soviet Union ZIL-4906 did not retire, and remained in the service of rescue teams of the Ministry of Emergency Situations.

We advise you to read the article: ZIL – history of the giant 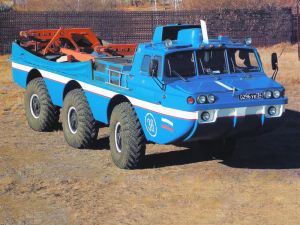 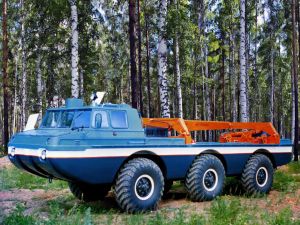 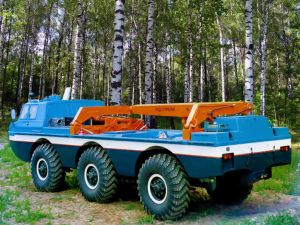 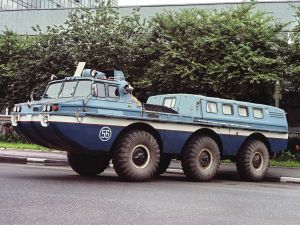 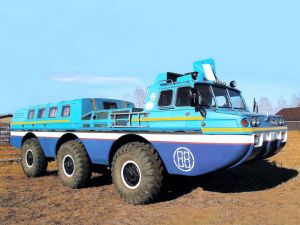 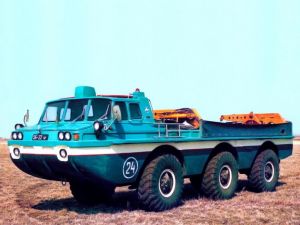 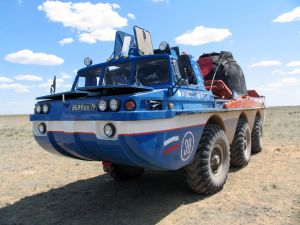 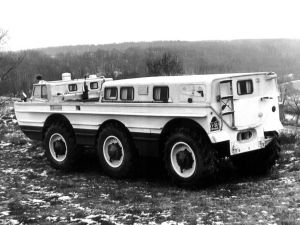 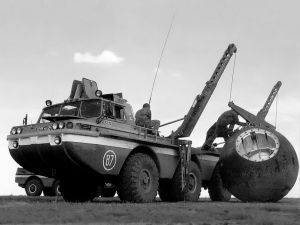