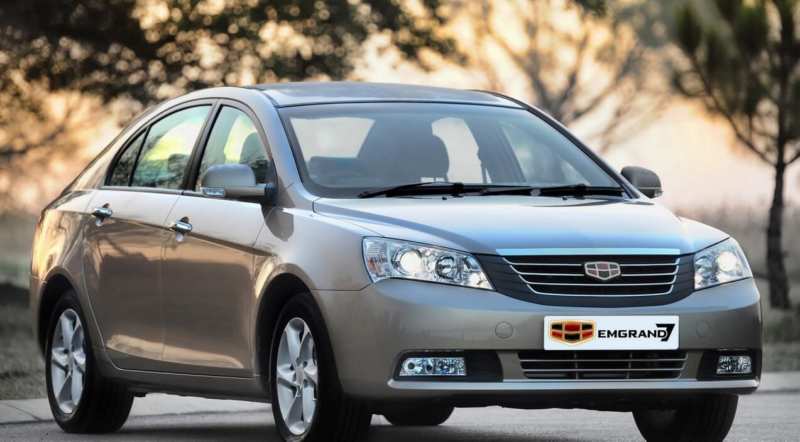 Sedan’s version of the car from Celestial Empire, positioned by the manufacturer as a Class D machine. On the automotive market of Russia, the car got to the middle of 2012. A good start to the implementation of the car continued with the subsequent increase in its popularity among the drivers of our roads. As a result, the car dispersed 7,789 copies. Despite the crisis in 2015, the company did not falter, with 4,929 vehicles produced. Despite its considerable presence in the market of the Russian Federation, the car has not undergone any upgrades, and this despite the fact that Geely in China has already passed the restyling, which was at the end of 2014.

Perhaps that’s why the company from the Celestial Empire showed everyone the new restyling Geely Emgrand EC7 Sedan 2015-2016 model years. This model will be available from the end of May, or rather on the 31st of this year. Even the previous model of sedan was able to win a good favor with many drivers. At the same time, the Geely Emgrand EC7-RV (hatchback) version was presented. The whole model range is Geely.

It is no longer a secret that the change in the appearance of cars became one of the fundamental points of any restyling, so the Chinese sedan was no exception. Thanks to the creative research of designers from China, the appearance of the car is improved. Although the previous editions of the car can not be called obsolete, but time is not in place. This may have been the reason for the decision to modernize the car, while preserving the most important advantages of the car, which can be attributed to its amazing reliability, which surprised some people a little bit.

As for the front part of the car, the optical light-amplifying system, radiator grille, front bumper and nameplate were changed there. Headlights, in general, saved their shape, but acquired the latest filling technology with unique LED ribbons of running lights, which loop the gap between the main optical elements. 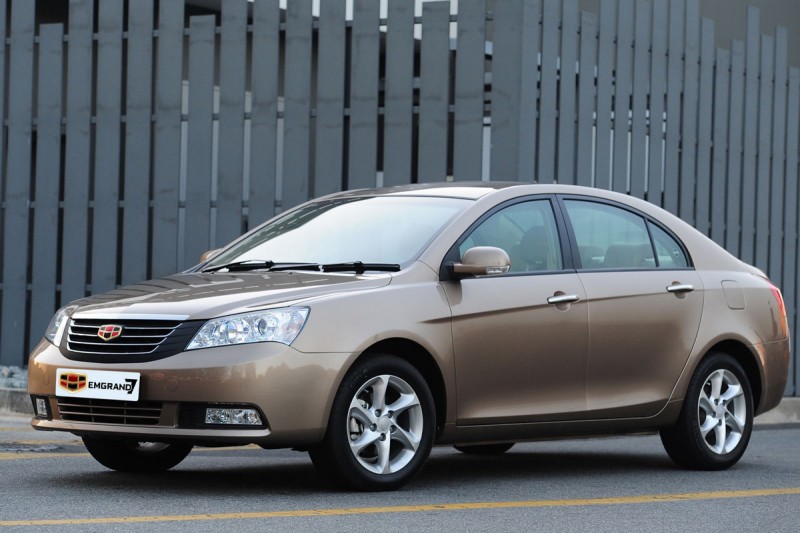 Also, a bumper was configured differently, which received a new air intake and modified side sections, which are used to place the horizontal lines of fog lights. The restyled radiator grille, which is perfectly integrated between the front light blocks, looks much better when compared to the previous model. By the way, such words can be referred to the whole front part of the new sedan Geely Emgrand EC7, which looks very stylish and interesting.

The view on the side of the Chinese sedan shows us the presence of correct outlines, well-drawn back, which is decorated with ribs of the sidewall, which are very stylish. The version of the sedan is separated from the version of the hatchback themes. That they have different lines of body structure. Despite this, both variations look attractive and stylish. External rear view mirrors received LED repeaters, which makes the appearance of the machine from the side more successful. 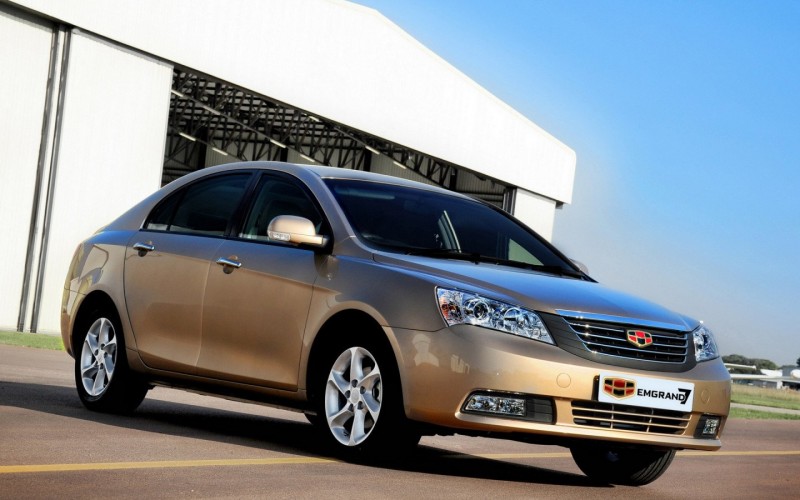 As rollers, there are 16 inch light alloy wheels that fit pretty well into the overall appearance of the machine. This is much better than in the earlier model, because there were 15-inch rollers, which looked a little strange, especially taking into account the large size of the car. The aft part of the Geely Emgrand EC7 Sedan opens up new LED Mercedes, C-class lanterns, luggage compartment lids with chrome molding across the width, a neat bumper with a plastic diffuser and reflectors on the sides.

New fog lights and optics in general also got their places. You can also find pseudoshrinkers on the exhaust pipe. Speaking in general, the update had a very good effect on the Geely Emgrand EC7. The car became more interesting, attractive, noticeable and even youthful.

The way the saloon of the updated sedan from the Geely Emgrand EC7 2015 has been decorated simply cannot but please everyone who will sit inside the car. It provides modern equipment, quality materials and a high level of assembly, as well as new comfortable seats on the front row and a cozy back sofa. The first row of seats is already in the basic configuration has the function of heating, which simply can not but please, especially in winter.

The improved interior looks modern and stylish by introducing a new steering wheel, which has four spokes and tides on the rim in the area of correct hand grip. All this is complemented by an informative and stylish dashboard with the presence of classic radii of the speed sensor of the power unit and speedometer, which are complemented by a massive display of the board computer. 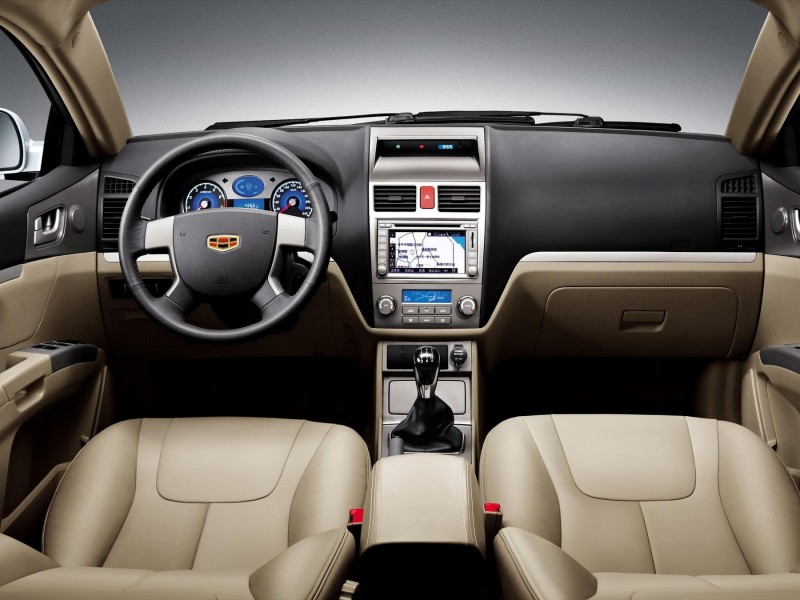 On the right, there is a heavy and large front panel of other moulding with a large and wide console plane installed in the center, which easily accommodates the new advanced multimedia system with a color screen, the size of which is 7 inches, and which has the support of touch input. The original climate control system control unit is located next to it. The front seats are packed tightly and have well-developed side support. Those passengers who sit on the rear sofa, and there can be three of them, get a comfortable sofa and a lot of free space. 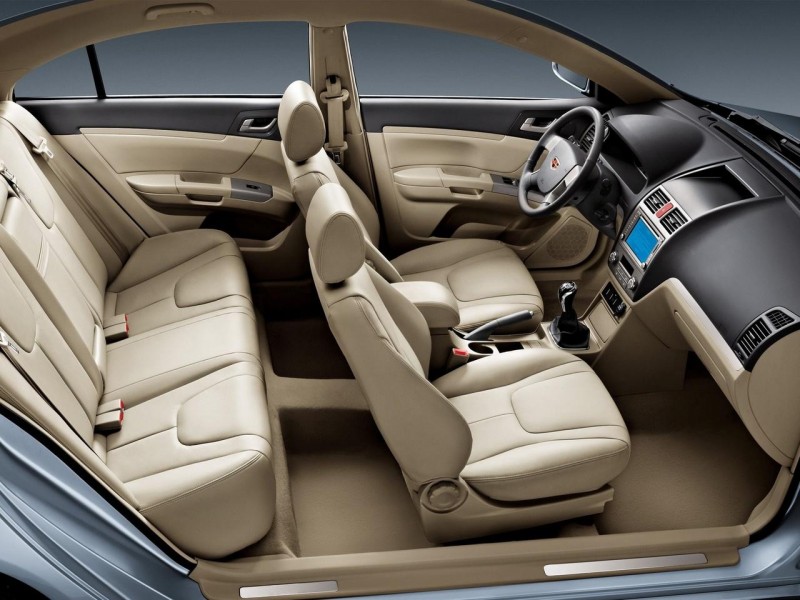 If we speak for the assembly in general, its level has grown much, the equipment has become more modern and interesting. The Geely Emgrand EC7 version of the sedan wins a little in terms of free space above the head. However, this is not the only plus of it over the hatchback. Hatchback has 390 liters of useful space, and if you fold the backrests of the rear seats, you can increase the useful volume to 1,000 liters. However, the sedan, already in the base complete set goes with 680-liters. Although it is not said how many liters will be, if you add up the backrest, it is logical to conclude that this volume will be at least twice as large.

The updated Chinese Geely Emgrand EC7 sedan is equipped with a fundamentally new gasoline powered engine with a capacity of 1.3 liters of 4G13T turbocharger, which is capable of producing 133 horsepower. This engine is synchronized with a 6-speed manual gearbox or CVT variator. The maximum speed is about 182 km/h. Speaking of fuel consumption, it is rather modest, about 6.3 liters per 100 km. The steering is installed with an electric booster.

In addition to the new power unit, the Geely Emgrand EC7 will be equipped with the previous atmospheric engines. This is a volume of 1.5 liters (98 horses) and 1.8 liters (126 hp). More outdated engines come with a 5-speed manual transmission and a CVT variator. If atmospheric motors are installed, only hydraulic power steering is provided. 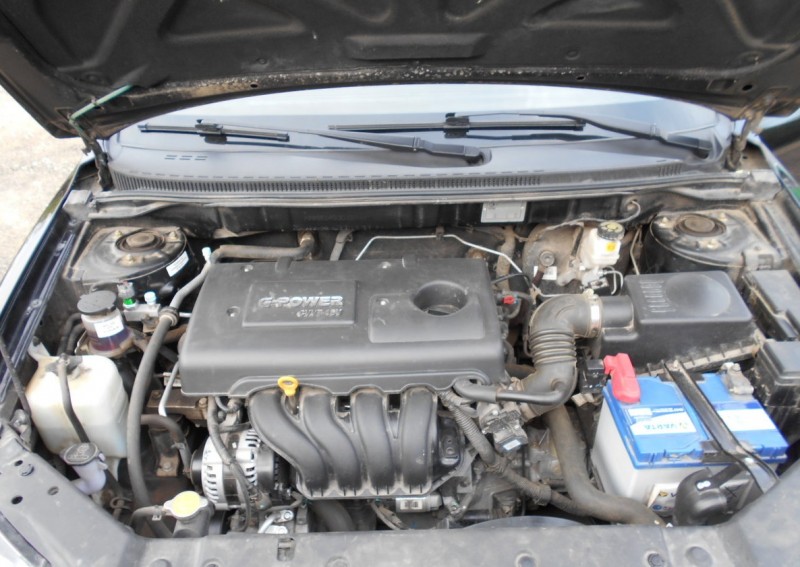 As for the suspension itself, it has not undergone any changes, there are still McPherson-type racks in front of it, and the rear wheels of the torsion beam. The brake system is represented by disc brakes, which are also ventilated in front.

It is quite logical that the changes that have affected the appearance, just could not help but to pull the changes in the size of the car. As a result, the length of the car is 4 631 mm, width 1 789 mm, height 1 470 mm, wheelbase 2 650 mm, the height of ground clearance at 167 mm. It is clear that this is not a very high car, but we do not represent Jilly Emgrand EC7 SUV, so it’s relatively good here.

To security systems can be attributed the presence:

Passive safety refers to the presence:

Active safety and suspension has:

It is not a secret, as before the Chinese machines were crumpled in a pile of iron during frontal crash-tests at a speed of 60 km / h. The whole root of the problem was in the thin metal from which the load-bearing body parts were made. However, today it is not possible to say anything like that about Geely Emgrand EC7, because Chinese specialists took this problem seriously.

Although this is not partly because of the fervent desire and care for the lives of car enthusiasts, but because the global market dictates its rules and gain respect without providing good security, it is simply impossible. If you get rid of bad quality plastic and thin bodywork, Chinese cars can compete even with famous Japanese and Korean automobile companies. 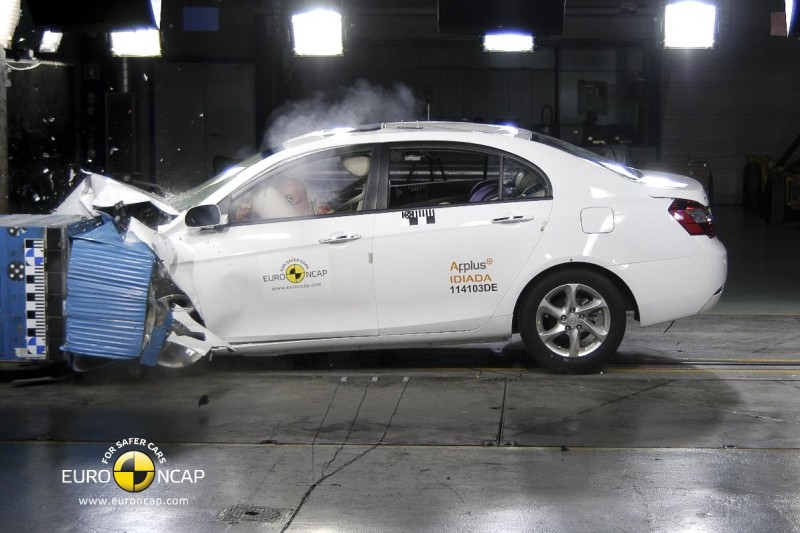 According to the result of ENCAP crash-tests, the Chinese man got 4 stars and that’s why he gained a solid foothold in his positions on the world market. In addition to the use of thicker metal, the car received auxiliary side bars of safety, which is very helpful in the event of a collision at the side. Moreover, front and side airbags are installed.

It is no longer a secret that Chinese car manufacturers even in basic equipment provide a large list of equipment. Jilly Emgrand EU7 2015 is no different. Therefore, the standard equipment has a system of keyless access to the cabin, the start of the power unit with the help of a button, electric windows, all windows, central locking on the remote control, navigation system with a massive screen, audio system, air conditioning, a pair of front airbags, anti-theft alarm systems, EBD and ABS, heating and electric drive for exterior mirrors, LED daytime running lights. The cheapest equipment Standart will cost from $7960,76. 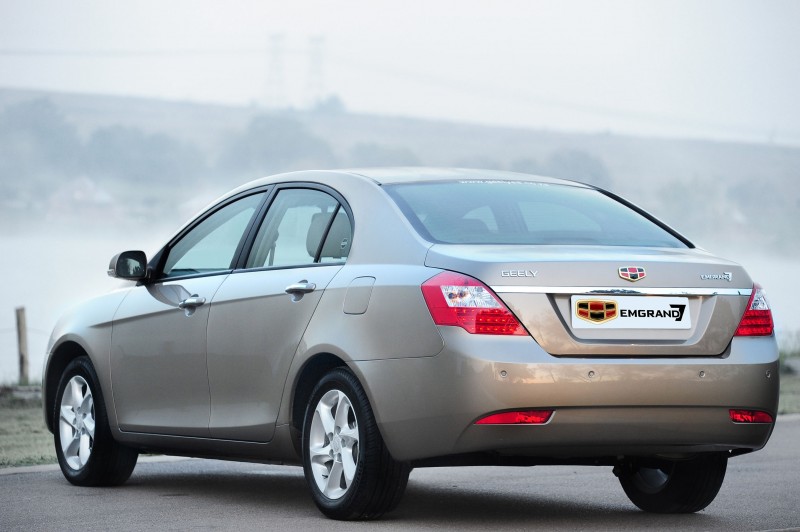 It is clear that there are proposals for more advanced versions, which will have cast 16-inch wheels, electric hatch, multifunctional steering wheel, cruise control, climate control, leather interior decoration, Electrical adjustments to the driver’s seat, a 7-inch multimedia system that supports touch screen input, rear view cameras, navigator, side airbags for the first and second row of seats, rear parktronic, TPMS, BA, TCS, ESC systems. The top version of Geely Emgrand EC7 is estimated from $9993,96, where there will be a 126-horsepower engine and variable gearbox.

If earlier everybody could joke about cars from the Celestial Empire, especially about their quality, today, they are even able to compete with many Japanese, Korean and even European cars. Undoubtedly, this is a confident step forward for the company. Of course, it may have to improve its own cars, because the car market is not in place and just needs to be constantly developed, otherwise you can lose your seats and fans. The design staff worked for fame, which is clearly visible in the appearance of Geely Emgrand EC7.

The sedan received retouch and new LED lights. Although the salon is not distinguished by its refinement and use of expensive materials, it has become a little better and more pleasant. In more expensive complete sets there is a 7-inch touch screen display. The front seats have improved side support. On the back row, three adults can sit down quietly, and they will not feel discomfort in the legs or in the head. 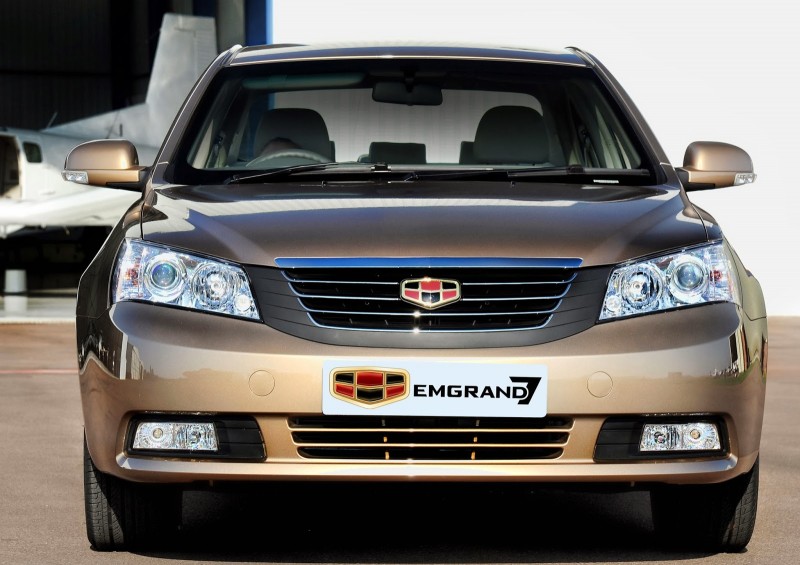 The volume of the luggage compartment is pleasantly pleasing and can be increased, if necessary, by adding up the rear seat backs. A very weighty argument in the direction of the Chinese updated sedan, is the presence even in the basic equipment of good equipment, than recently are famous just machines of Chinese manufacture. Although the power units installed in the car Geely Emgrand EC7 do not break records, they calmly cope with their tasks.

The company has also not forgotten about ensuring an adequate level of safety not only for the driver, but also for the passengers sitting next to him. Another advantage is a rather acceptable pricing policy of the company. I would like to hope that the cars from China will be constantly updated for the better, and the production of new cars will not stop.

We advise you to read the article: Geely’s History 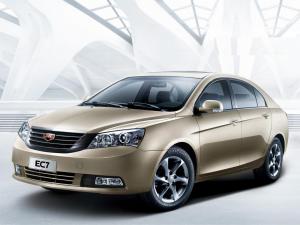 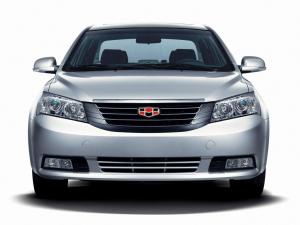 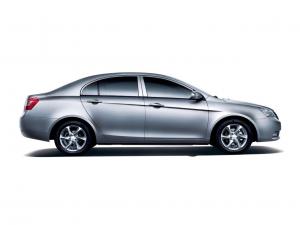 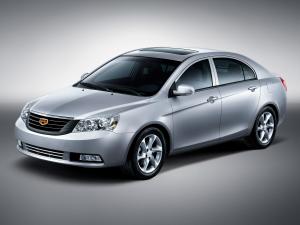 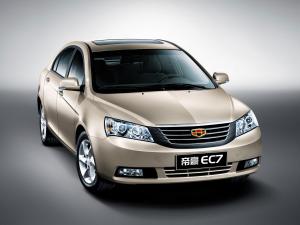 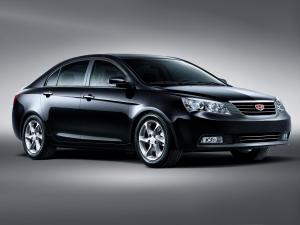 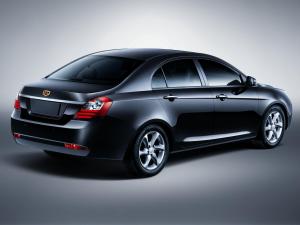 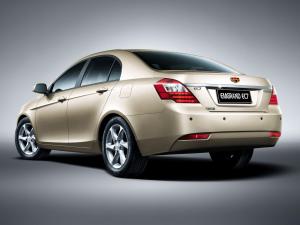 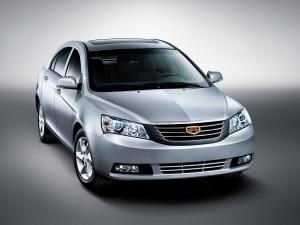