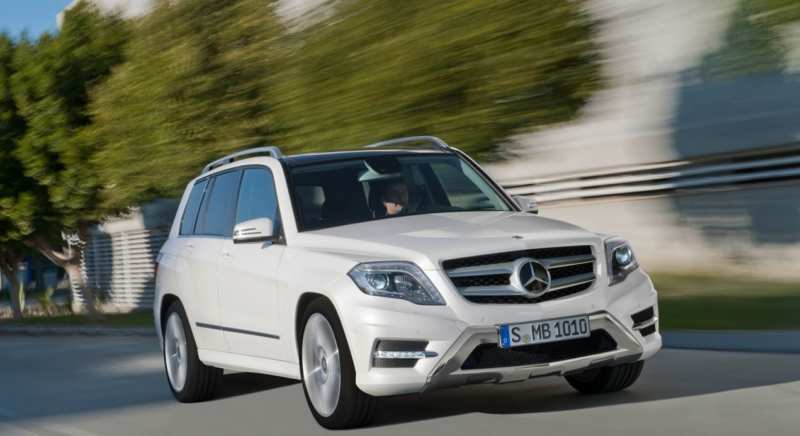 The crossover has acquired a retouched exterior, interior and advanced power units. Interestingly, the Mercedes GLK crossover was presented at the same time as the tests of the updated off-road car G-Class. Such a decision, the company wants to make it clear to everyone that GLK is a worthy member of their off-road class, not just a simple premium parquet. But there is also a small percentage of slyness, because after restyling, the car has become much lower to the road surface. The whole model range is Mercedes-Benz.

The Mercedes-Benz GLK exterior perfectly combines the brutality of the Gelendwagen with the elegant features of C-class cars. If you compare it with his equal cars, it looks bulky and muscular. The robust appearance of the compact off-road vehicle is achieved by means of expressive, angular shapes that stretch from the nose to the majestic rear. The “Muzzle” of the car is formed by a massive grille with a 3-beam star” in the center. 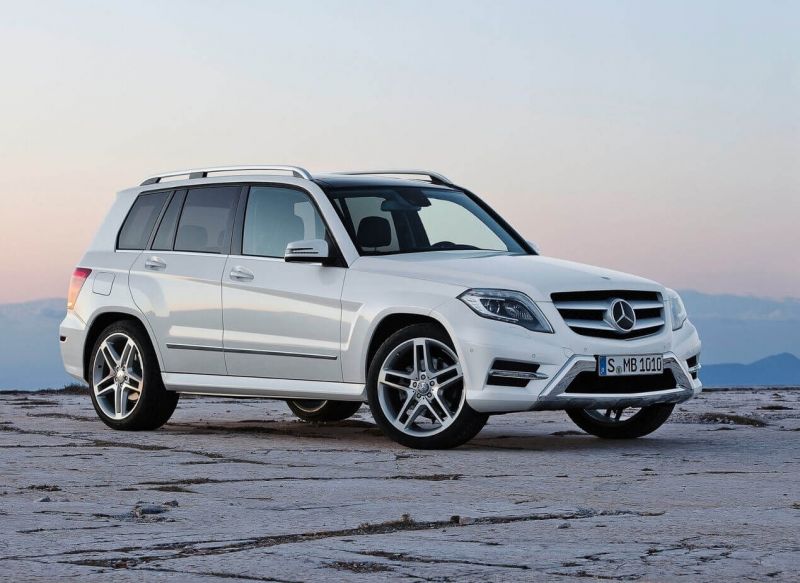 There are also rounded headlights with LED boomerangs, a relief bumper with “lines” of running lights. The front bumper received aerodynamic side elements and belts of daytime running lights. There is also a powerful air intake, an abundance of massive chrome elements, which effectively emphasize the aggressive qualities of the exterior of the car. When the new appearance of the GLK-Class was being developed, the designers of the model decided to move away from strict, straight lines, which are inherent in the past models and create a more rounded and smooth appearance of the car. 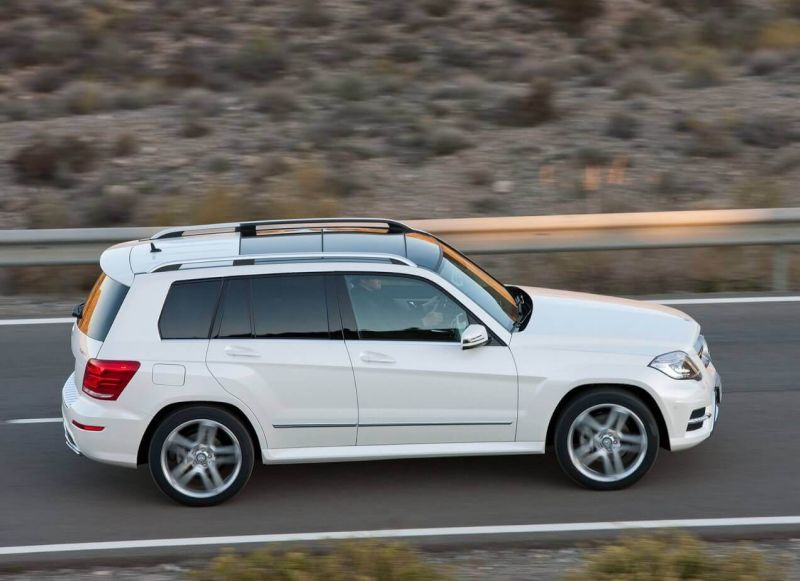 If you look at the side of the wrestling Mercedes-Benz GLK, he looks a little like his older brother Mercedes-Benz GL, and very successfully. It can be seen on the long hood, chopped forms, straight lines, wheel arches, which are more like a massive German off-road car. There is a stylistic line of wheels originating in the middle of the front arches, which merges upwards in the upper edge of the lanterns installed at the back. But our ward looks much more harmonious than his large-caliber relative. 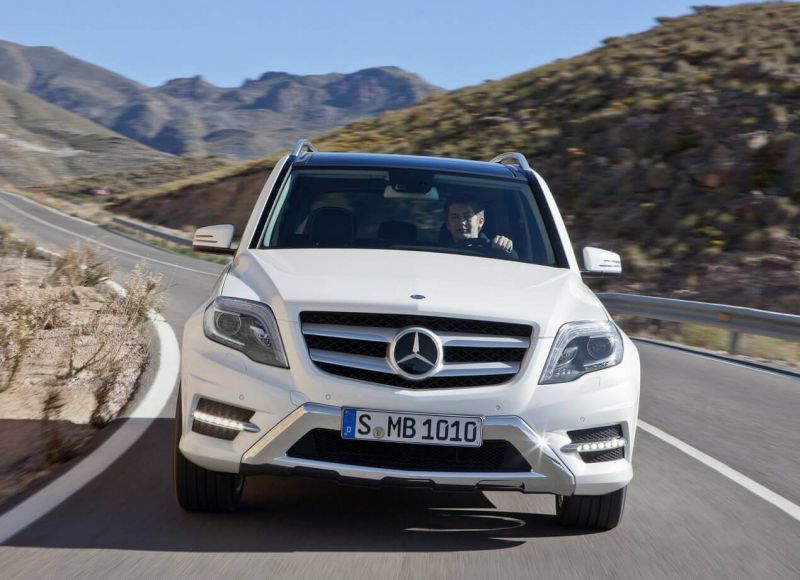 The rear part of the upgraded Mercedes-Benz GLK crossover has large LED-lighting, which distinguishes it from the previous model, as well as a chrome “diffuser”, in which the nozzle tips of the exhaust system of the machine are integrated. The rear bumper received a stylish metal lining, which was placed on the side of the chrome exhaust pipes mentioned above. If you buy a crossover, you can choose the colors of body painting from 3 non- metallic colors. 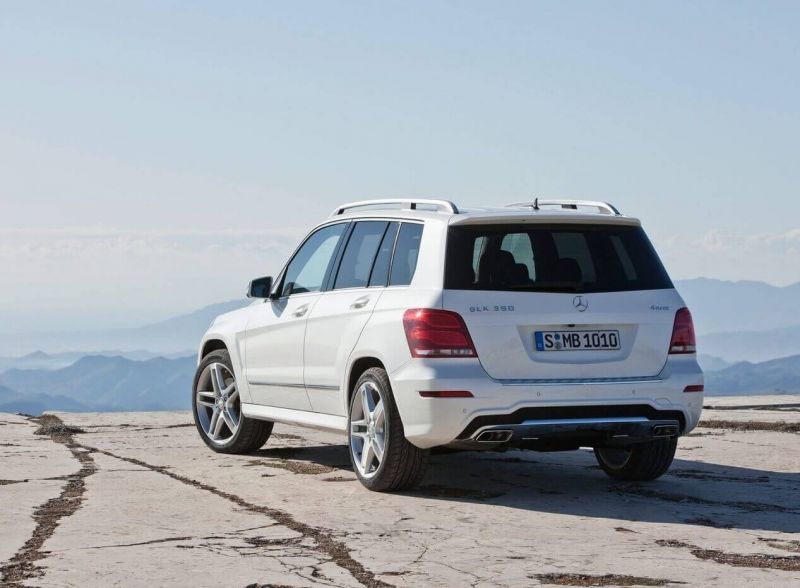 It will be the presence of fire opal (red), polar white and black. Next, there will be metallic enamels in 9 different colors, including the presence of silver diamond, silver iridium, silver palladium, gray tenorite, gray luconite, white diamond, blue cavancite, brown curd and black obsidian.

The changes that took place in the updated GLC model show that the company is returning to the beginning of the classic style of the brand. Details of this style in the restyled interior of the brand can be considered the presence of round-shaped ducts with clear cross-shaped grilles.

The car received a new three-spoke steering wheel, cut at the bottom, and there is also an updated dashboard with larger appliances, which are now installed in wells of chrome. The dashboard itself, along with the console’s synchronized visors in the middle, looks pretty nice. 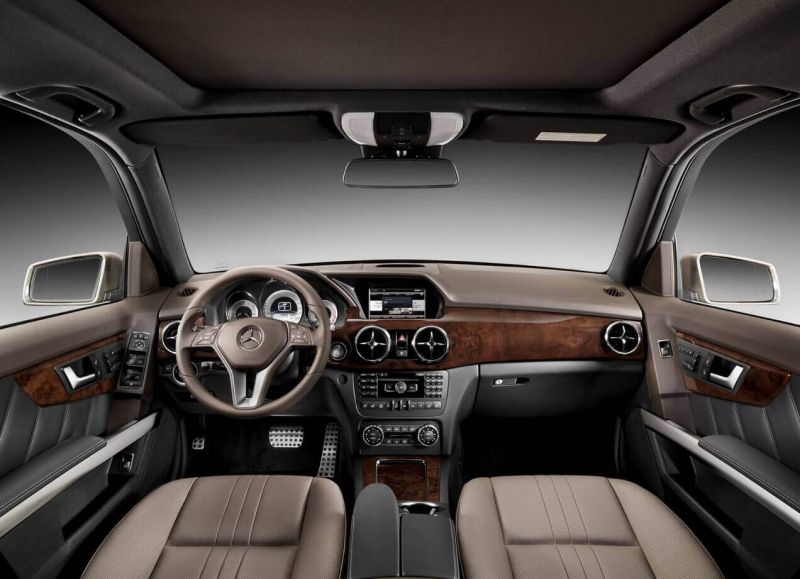 Below is the color screen of the COMAND APS multimedia system, which still supports touch input. The designers modernized the finishing of the multimedia and climate control units, which were placed on the central console. Whereas previously the central tunnel had a gearshift lever, now it was moved to the steering wheel in the form of a steering wheel selector lever. And in its place a niche for various trifles was installed. 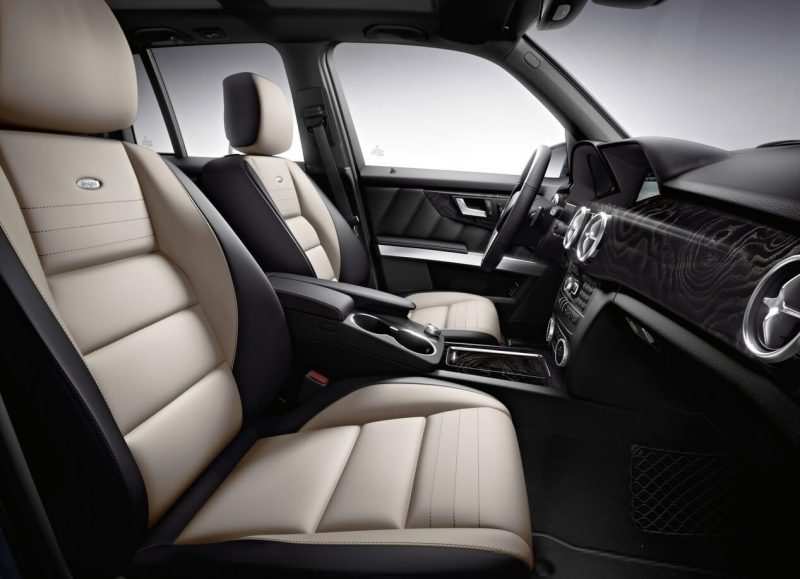 There are more wooden inserts in the interior. Quality as well as the materials used in Mercedes-Benz premium quality GLK. The level of sound insulation is at the highest level. In the restyled version of the Mercedes-Benz GLK, the front seats have a new shape, which have a well-defined side support. They are electrically driven and heated. The second row of seats is very wide, there can accommodate three adults. 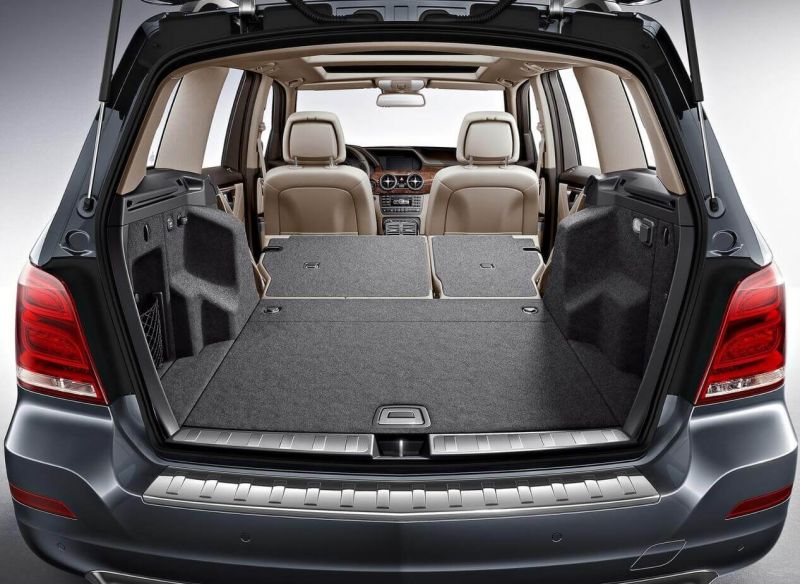 The backrest of the seats can be folded in a 40/60 ratio, which allows for a smooth loading surface. The luggage compartment provides 450 liters of volume, and if necessary, it can be increased by adding the same backrests, which will provide about 1,550 liters of useful loading space, which is not enough.

In the market of the Russian Federation, the German crossover will be offered with one diesel-powered engine and two gasoline-powered ones. The link will be a 7-speed automatic gearbox 7G-TRONIC (the top version will be equipped with steering paddles) and differential, asymmetrical all-wheel drive 4MATIC with electronic locking of interwheel differentials.

As standard, the torque will be implemented in the distribution of 45:55 in favor of the rear axle, but under certain conditions, this ratio can vary from 30:70 to 70:30. The list of engines starts with the weakest diesel engine GLK220 CDI 4MATIC, which is represented by a 2.1-liter turbocharged engine. 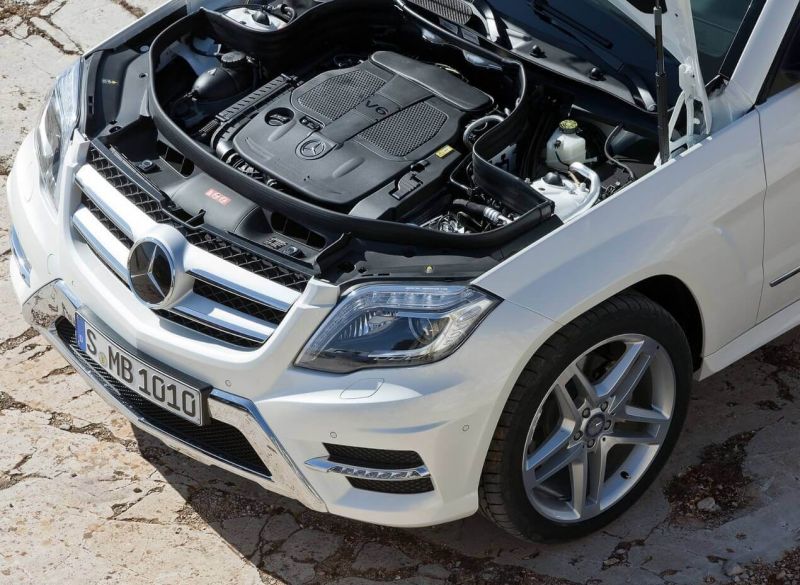 He’s developing 170 horses and gaining the first hundred in 8.8 seconds. The maximum speed is 205 km/h. Every 100 kilometers of the road, about 6.5 liters of diesel fuel will be spent. The gasoline engine is a 2.0-liter four-cylinder unit with direct fuel supply and turbocharger. It produces 211 horsepower. It covers the first hundred in 7.9 seconds, and the maximum speed is 215 km/h. It consumes this engine about 7.7 liters per 100 km in combined mode. 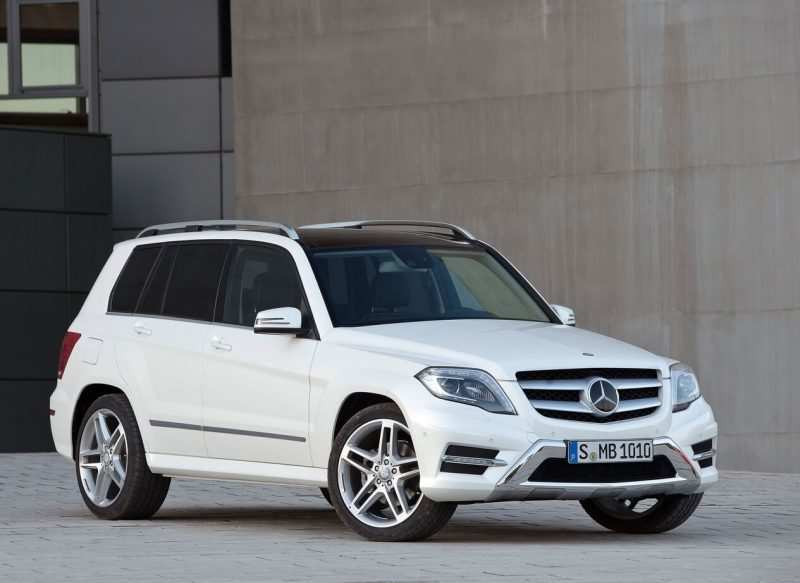 Next comes the atmospheric gasoline top V-type six-cylinder GLK300 4MATIC, which has a 20 valve system of gas distribution mechanism and direct injection. It already produces about 250 horses. 7.5 seconds is exactly how long it takes for a heavy crossover to reach the speed limit of 100 km/h and a maximum speed of 238 km/h.

He eats not much more than his “relative” – namely, 8.7 liters in mixed mode. Mercedes-Benz was based on the C-Class base. If to speak about suspensions, McPherson racks are focused on different planes with levers in front, and behind there is a presence of a four-lever design. 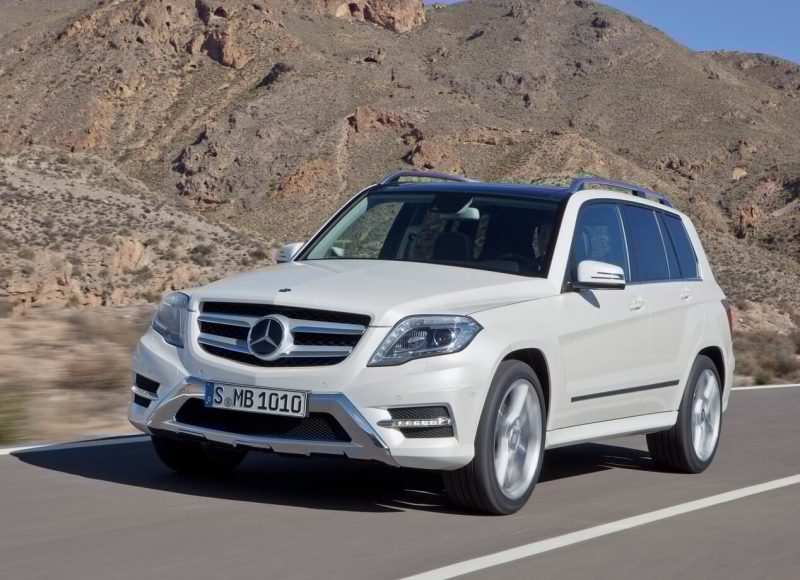 Steering is carried out with the help of electromechanical control amplifier with variable gear ratio. As a braking system, disk ventilated devices are installed on all wheels. It is logical to conclude that a German car also has modern “assistants”. Among them there is an ABS anti-locking system, ASR anti-spin technology, BAS emergency braking system and electronic
ESP stabilization control.

The premium parquet machine from German manufacturers fits well into the limits of its class. Thus, it is 4 536 mm long, 1 840 mm wide and 1 669 mm high. The wheelbase is no more than 2,755 mm, and the height of the ground clearance under the bottom is about 201 mm, which is not bad.

However, this is not all, the car can still be raised by 30 mm with a special off-road package. The car has good off-road characteristics – the German can overcome the water barrier of 30 mm, it has exit and entry angles of 23 and 25 degrees respectively, and the index of bodywork is 19 degrees. I would like to mention a large selection of light alloy wheels, where there are more than 15 variations. Wheel diagonal varies from 17 to 20 inches, with different variations of design drawings. 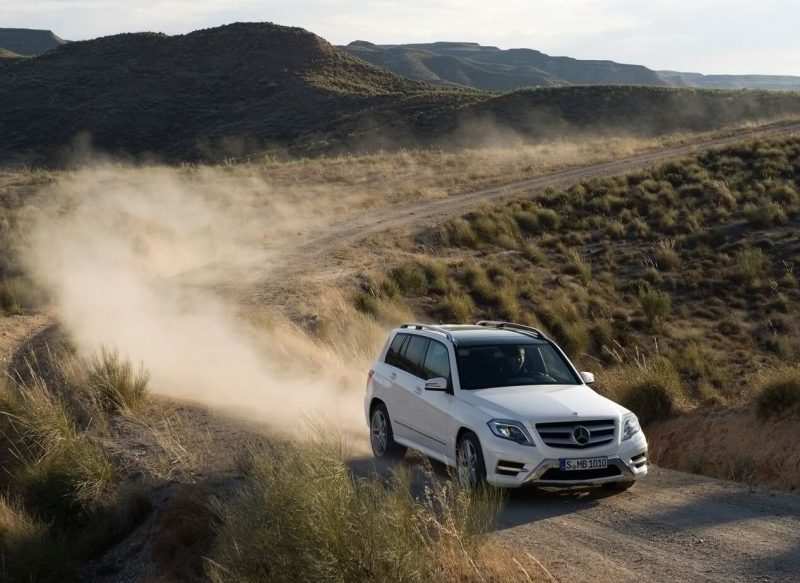 There are also 7 airbags, leather interior trim, bi-xenon frontal optics, full electric package. It seems that there is nothing to add to the top equipment, but it is not so, it has an even wider range of options, which can be listed for a very long time. Mercedes-Benz GLK in Russia from $33572. The most top version, with the strongest power pack will go from $45127.

Summing up the German crossover Mercedes-Benz GLK, I would like to say that the car is very modern, despite the fact that the company has made the design more classical. By its appearance it is clear that it strives for speed and is not afraid of light off-road. The front lighting has received a bixenon. Large arches of wheels with no less massive wheels, only complement the gracefulness. The stern looks normal and has a good luggage door and clear tail lights.

The manufacturer has equipped the crossover with a sufficiently high level of ground clearance, which can be further increased, buy an off-road package, which will result in a 30 mm increase. The all-wheel-drive system allows you to feel confident in light off-road conditions. The salon has turned out in the usual style for the German company, all qualitatively, expensively, on the places and intuitively clear. Manage all systems is very convenient and do not need to reach. The instrument panel is extremely comfortable, the central console is rich in door inserts and has a color touch screen. 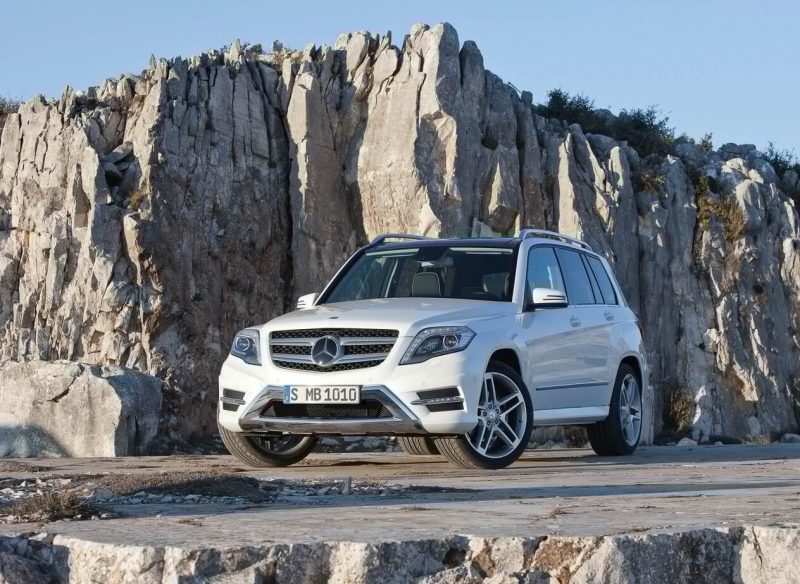 The front seats are very comfortable and have good side support. The car is equipped with an abundance of various systems designed to help the driver to drive the car. Power units provide sufficient dynamism, which just needs a stylish updated crossover. The engines have a low fuel consumption, which is very important these days.  Mercedes-Benz GLK will allow you to feel confident and safe not only for the driver, but also for the passengers sitting next to you.

The luggage compartment can be enlarged and the backrests of the seats can be folded together, so this car can be recommended to families. The next update for Mercedes-Benz GLK was made by German specialists very timely. Unusual design of the car is very useful. However, the car costs a lot of money, but for the quality and brand, today it is worth paying a lot of money. 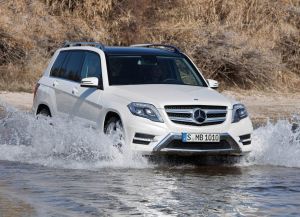 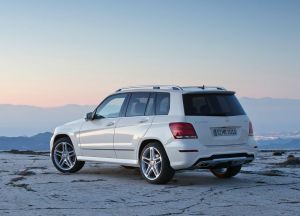 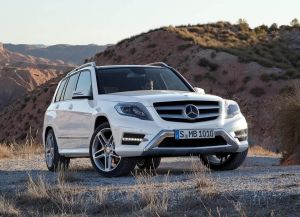 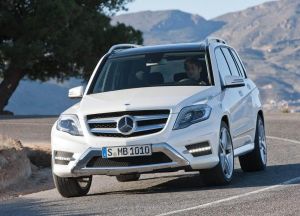 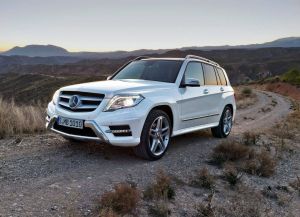 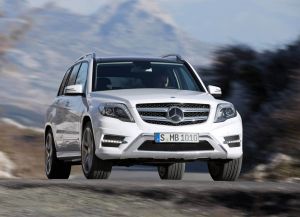 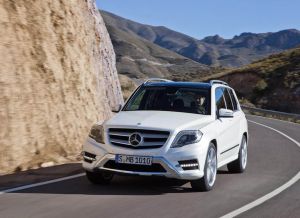 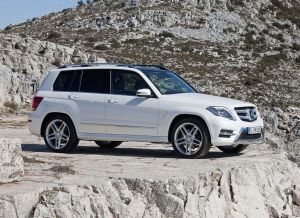 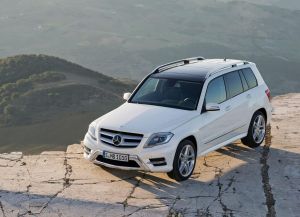